Kota isn’t an unknown place for anyone who happens to travel to and from Mumbai and Delhi. It wasn’t new to me either. Having born in Mumbai and having stayed in Delhi for 3 years, I had crossed Kota numerous times while travelling by train. But now, I was finally getting an opportunity to visit that city for the first time- for a family function. Yes, I was excited as I always am to visit a new place!

We caught the evening Jaipur Superfast express from Mumbai Central. I was much thrilled about getting to travel to Rajasthan once again (this being my fourth time!) But this was the first time I was not travelling to the usual touristy places but to another part of Rajasthan which is normally ignored by Desi and Videshi tourists alike due to time constraint. Leave others but even I had thought Kota is a complete modern city and a recently developed education hub and would have nothing to see there. I fell flat on my face when I started reading about Kota and realised it has history as old as 12th century. I was then very eager to visit this city, which was a continuously-at-war princely state- turned into the ‘Education city of India’.

We reached Kota station in the afternoon next day. Temperature there was quite pleasant despite it was almost end of winters in the North. Our relatives came to pick us up.

The area just outside the station felt just like any other Indian station- crowded, haphazard, and full of vehicles, Street-side vendors, lots of honking and adding to all that- lots of cows!

Moving further ahead towards the main city, the roads became more open, wider, cleaner and greener. They looked neatly done, with beautiful dividers and neatly placed street furniture and sculptures alongside the road.

This continued for a while until we reached another crowded area called Chhavni circle where our hotel- Grand Chandiram was located. The area seemed like a really busy one, with many private buses, taxi stands, ticket booking offices and many eateries scattered here and there.

We then checked into the hotel and rested for a bit. Hotel Grand Chandiram is apparently one of the famous hotels in Kota- famous also for the food they serve in their in-house restaurant. Hotel rooms too were very clean and spacious. Their lobby on the groundfloor houses an antique motorcycle flanked by two large symmetrical prints of ‘Bani Thani’- the beautiful and very famous singer-poet in Kishangarh during mid-18th century.

After the sumptuous lunch in the restaurant, I thought of taking a stroll along the same road. This entire stretch of road for a kilometre or half is full of hotels and restaurants. Towards the end of the road is the famous Kishore Sagar lake. Kota’s newest attraction- the Seven wonder park is also developed like a promenade along the banks of the lake. While walking there, I could see Taj Mahal, Eiffel tower popping out of the streetscape, so I couldn’t resist going inside the park to take a walk. 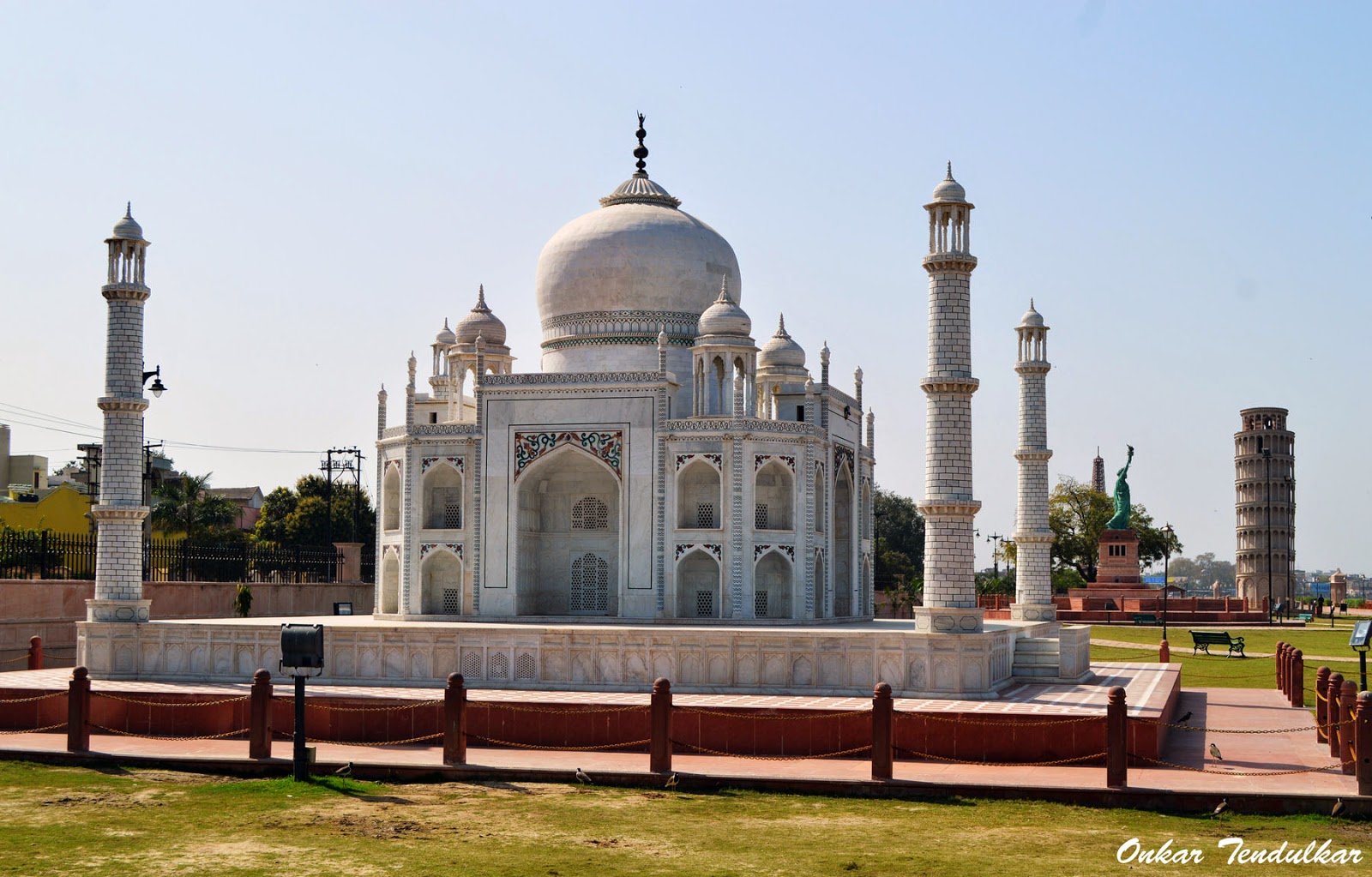 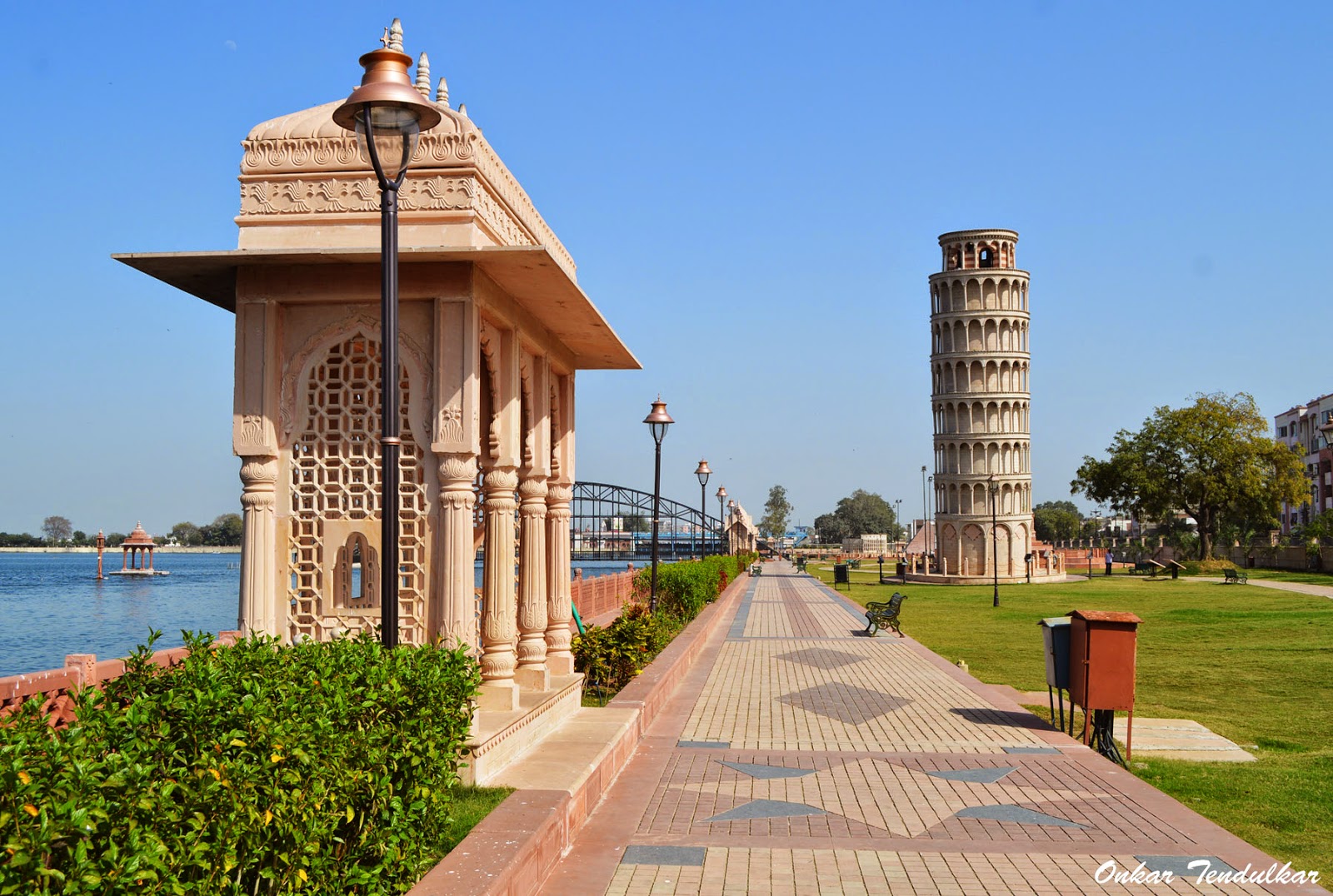 Maybe coz it was just 3 in the afternoon, me and other 3 people were the only visitors in the park that time. (Park fees: 10 rs/ head, no separate fees for Camera). First wonder as we enter is the Roman Colosseum in Italy, then the Giza pyramids, then our own Taj Mahal, then leaning tower of Pisa and so on.. Whoever has designed the park, has definitely put in some thought regarding the placement of the miniature wonders as well as the curved trail that runs all around the park. Each wonder has a small description written in front of it in English and Hindi. The miniatures produced here are very well done unlike the cheap copies we get to see around. Especially the leaning tower of Pisa is so well made, that a picture of this tower could actually confuse people whether this is the real one or a copy of it. However it was funny to see the nazarbattu placed on tower of Pisa. 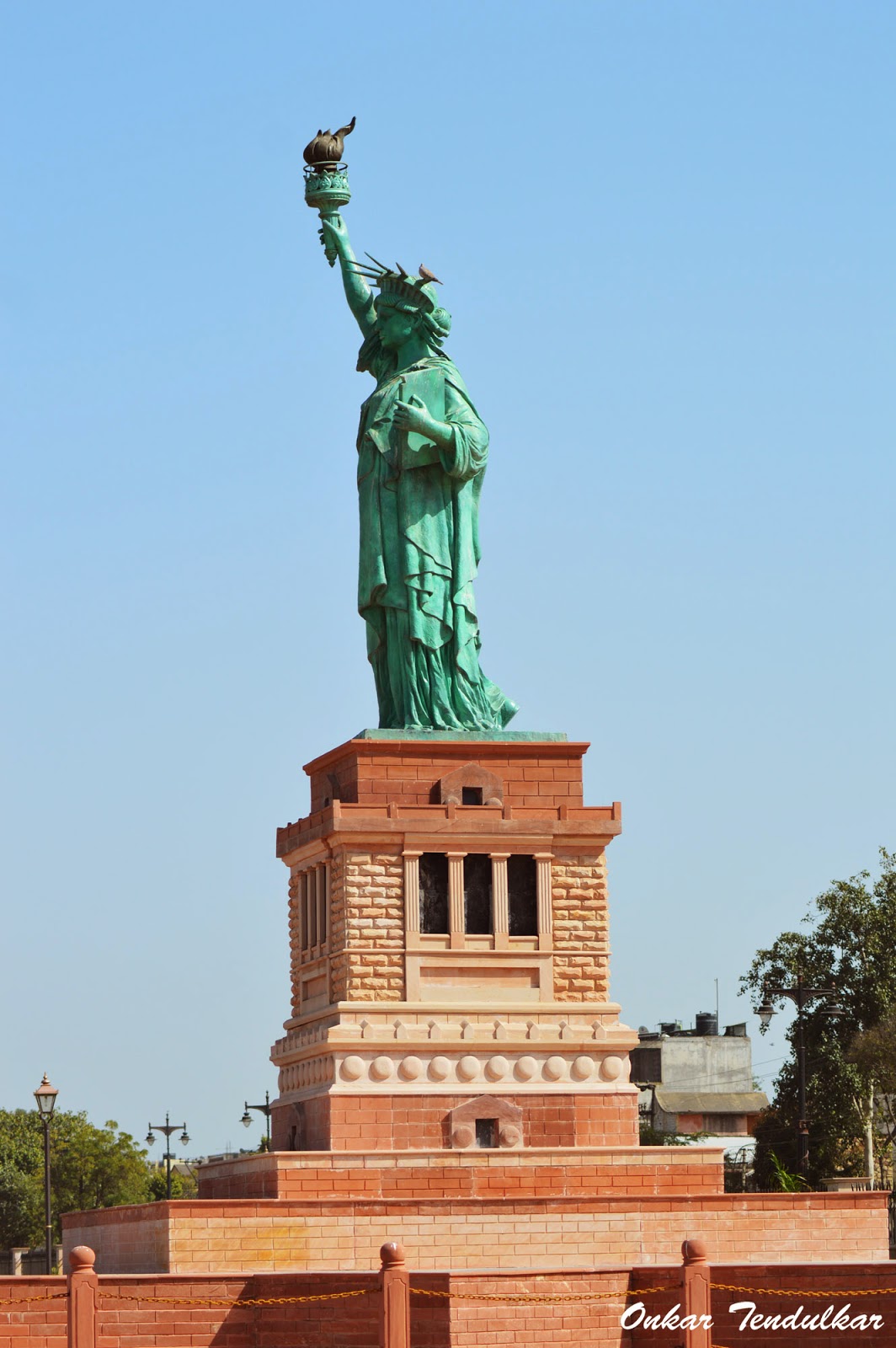 Tajmahal here too is in good proportion but the immediate residential buildings behind it sort of kill its look. Maybe planting tall trees at the periphery of the park along the road would help cut down the visual eye sore. This will also increase the footfall inside the park as right now even the people walking on the footpath along the road can see and click the wonders without actually entering the park and without paying for the ticket. If not trees, at least a tall boundary wall should help!

The inaccessible Jagmandir built by a queen of Kota in 1740, sits in the middle of the KishoreSagar lake. The Sydney harbour bridge like structure created in the seven wonders park takes one closest one could go to the Jagmandir for clicking pictures. 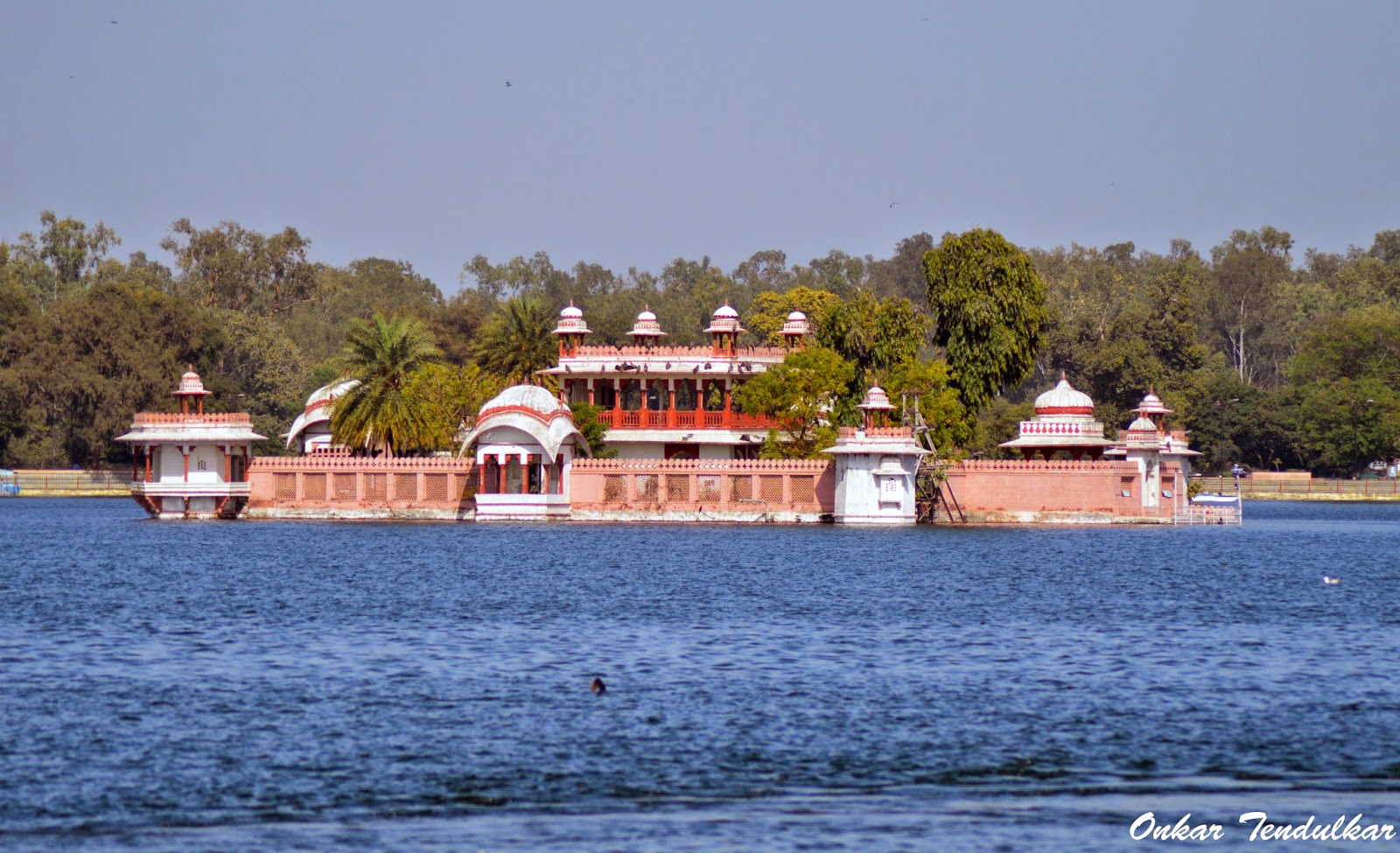 While in the park, seeing me click pictures in my DSLR, a guard told me that these wonders look even more beautiful when they are lit up in the night. Deciding to return here again tomorrow night, I came back to hotel room; as tonight we had to attend a family function.

Today we hired a car for sightseeing around Bundi and Kota. After visiting Bundi in the morning, by the afternoon we came back to Kota. (please visit the separate post on Bundi)

It was just around 2 PM and we had hired the car for entire day. Our relatives then suggested us to go to a place called Abheda mahal and a temple of Karni mata- on the outskirts of Kota nearby each other. The road that our driver took while going was in a very bad shape and hence took longer to reach there. The karni mata temple was a very small shrine in the middle of sprawling lawns. Further up from the temple, there is a promenade created along the lake which gives a distant view of Abheda Mahal floating on the lake. 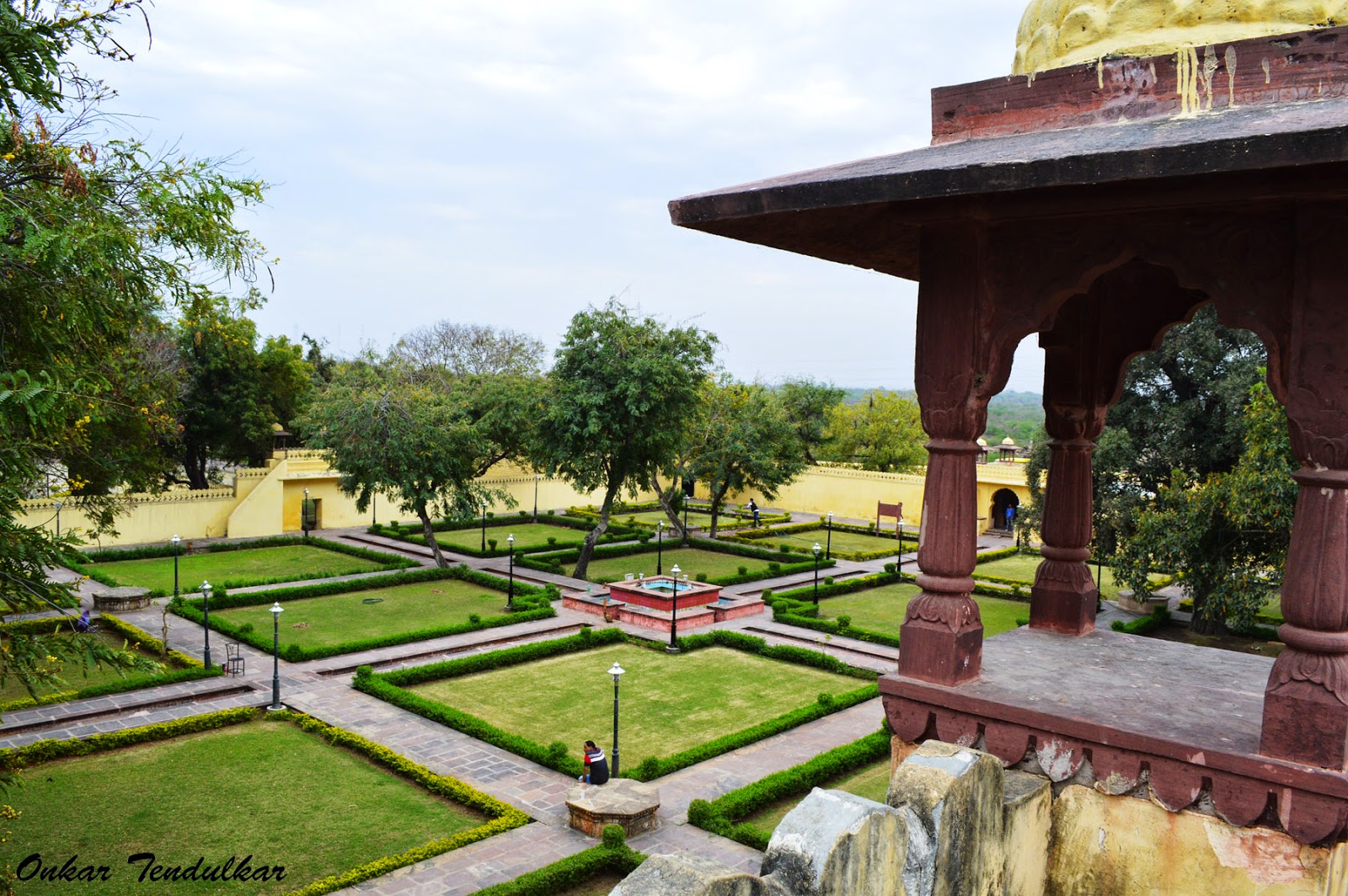 Another 5 minutes’ drive from the temple and we reached the Mahal. The information board outside the Mahal reads that this palace was built in 18th century on the banks of this massive lake. There is no information there as well as on the internet as to who built the palace. The actual palace here is quite small and largely plain. The pond in the palace adjoining the lake is said to have had many crocodiles during the reign of King Ummaid Singh 2nd who used to come out of the water and entertain the people! As bizarre as it sounds- just can’t imagine crocodiles entertaining people! 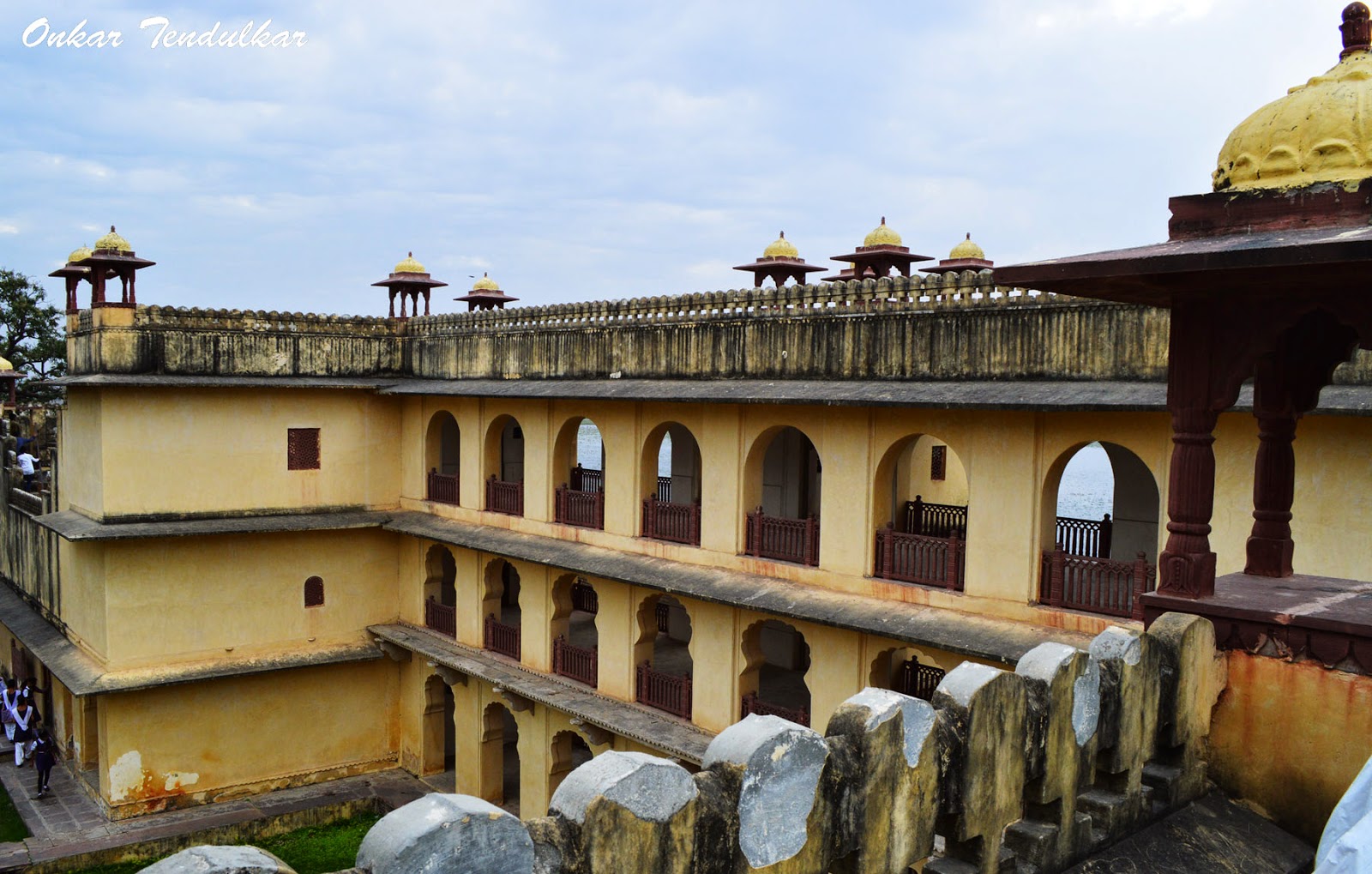 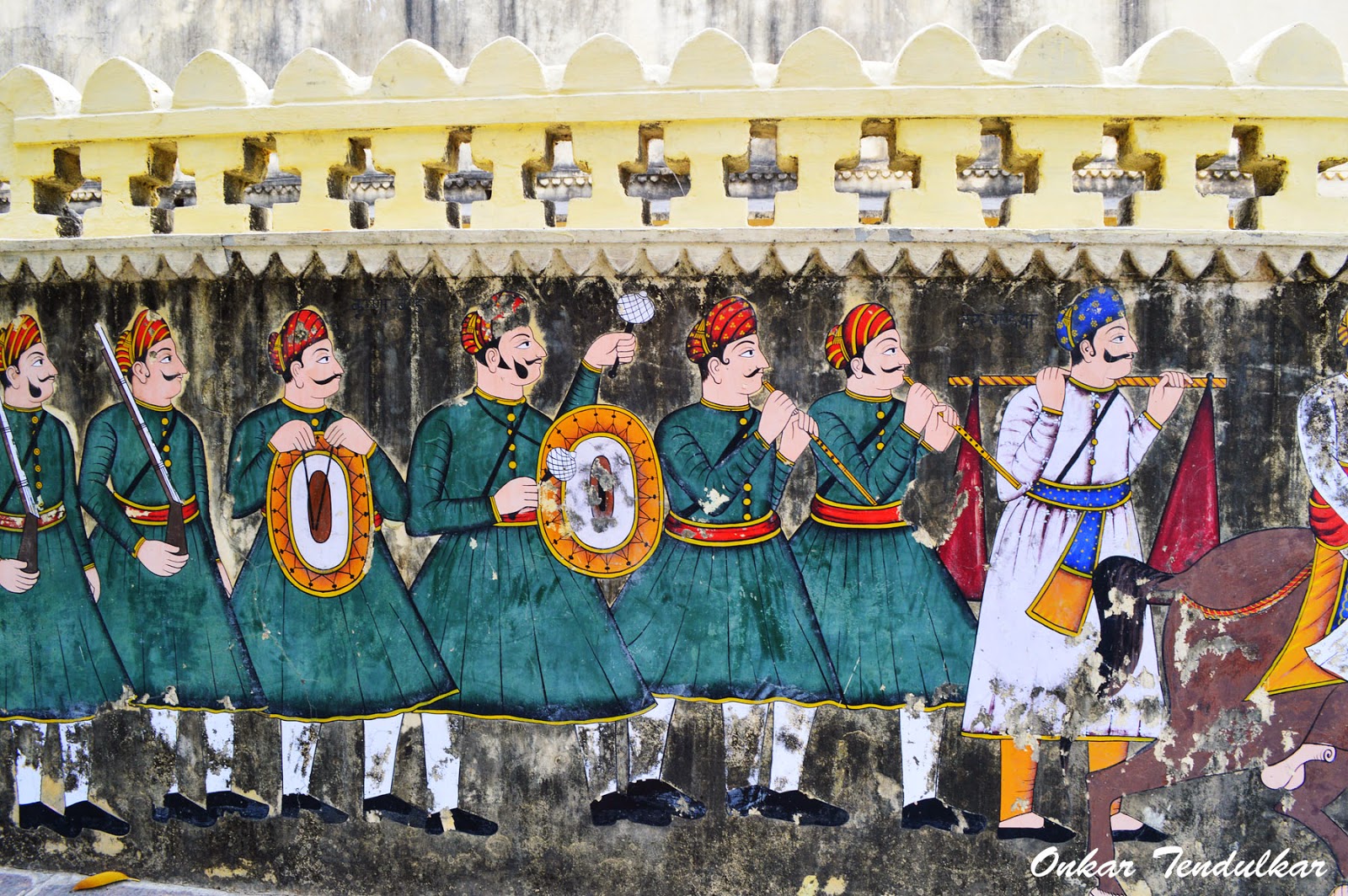 The mahal also has a neatly done symmetric lawn in the open court. The Kota style paintings done on the exterior walls of the Mahal are certainly worth the time.

Coming back to the main city, we went to the Kota garh palace. Kota’s garh palace is a large complex of beautiful heritage buildings spread across large area on the banks of Chambal River built in 1271 A.D. by prince Jaiti Singh of Bundi. However most of these buildings were added one by one to the fort by later rulers. Many of these buildings have now been rented to various institutions like schools, college or govt. offices. The main attraction here is the garh palace museum (Rao Madho Singh museum) which houses relics of Kota’s glorious past. Needless to say even here, the entrance to the main palace (now museum) is called Hathian gate (elephant’s gate) with two large elephants flanking the gate. These elephants however are painted (unlike Bundi’s) and have mahouts sitting on them.

As we enter inside, there is a small temple of God of Kota rulers. And further inside is a large paved courtyard known as Rajmahal Ka chowk. Entering inside the museum, in front is a large Durbar hall which houses state regalia, seals and objects of art. 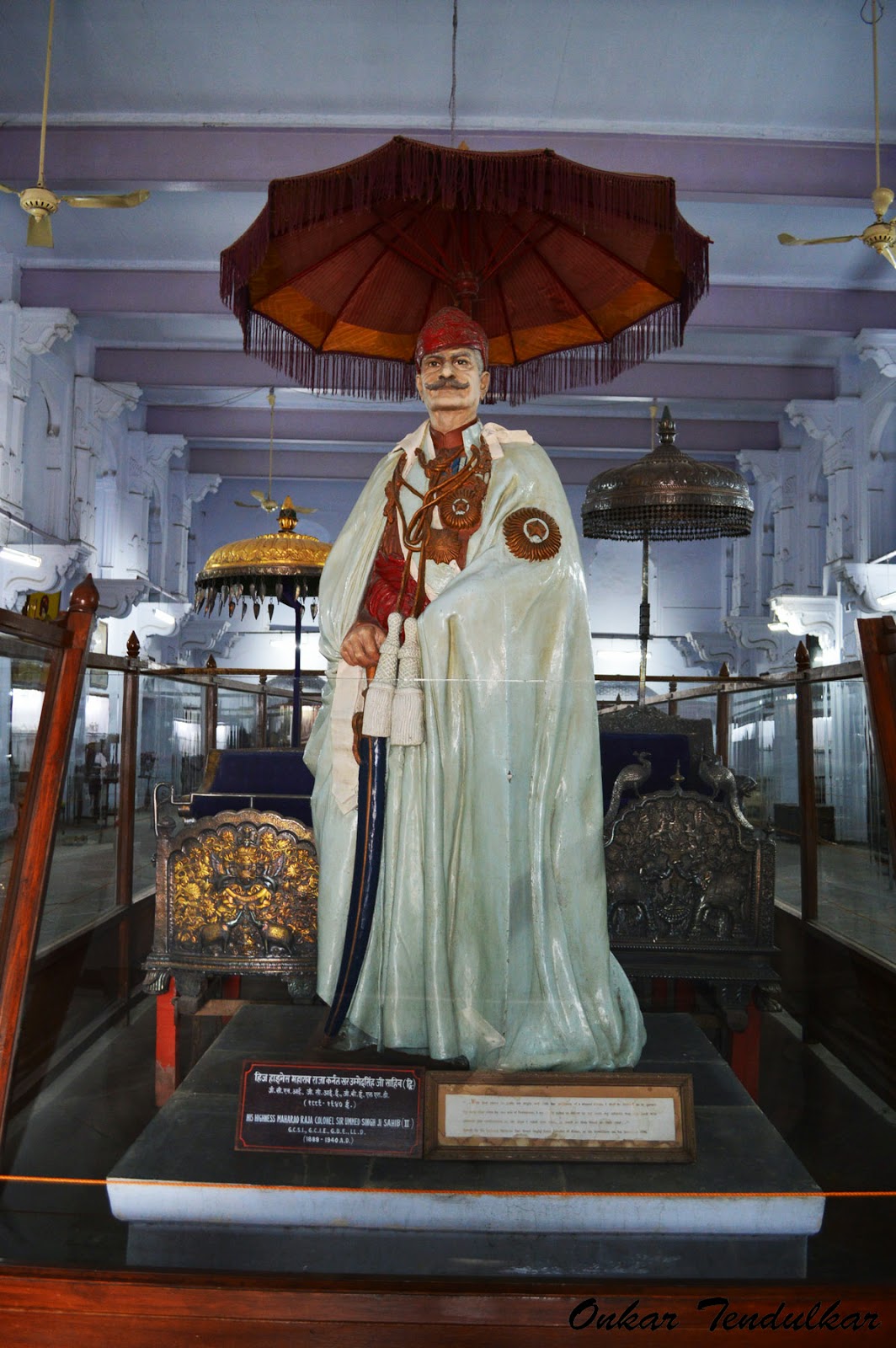 The museum also has an arms gallery, a large photo gallery showcasing vintage photographs of the kings, an art gallery of Kota miniature paintings, a wild life gallery consisting of stuffed animals hunted by the kings.

Kota palace also has its own version of Aaina mahal (Diwan–e-aam) where the king used to sit on his throne. It has 17th century mirror work and wall paintings.

All of the above are housed on the ground floor of the palace. Upper two floors require a separate ticket of 50 rupees (2015 rates). A lady at the palace took me to show the upper floors opening one door after the other. The upper two floors are truly stunning as this is the actual palace which houses all main areas like- Diwan-e- Khas (hall of private audience), Bada mahal (king’s private chamber), Arjun Mahal (another room with miniature paitings) and Chhatra mahal.

Diwan- e- Khas here as well has elephant capitals on its pillars. It offers a seamless view of Chambal River flowing by. King’s private chamber is a large room with vaulted ceiling with insane wall paintings covering the whole room entirely. The room however is extremely suffocating as it has no windows but just another door leading to a private balcony. 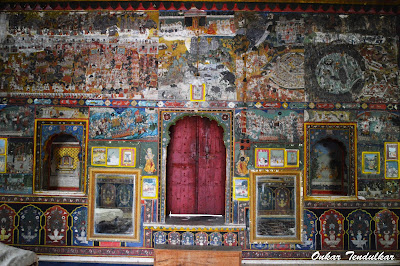 It was already late evening by the time we left from the Garh palace. We asked the driver to drop us back to the hotel and after having dinner there, we again went to the seven wonders park which was at a walking distance from hotel.  As expected, the wonders were now beautifully lit. The park even had a decent number of visitors now. Taking a walk around the entire stretch of the park, we came back to the hotel and called it quits for the day! 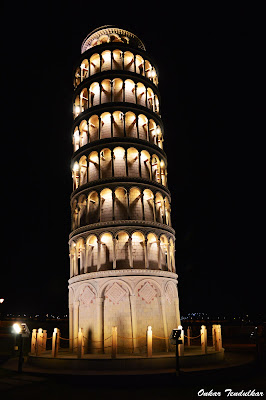 Really tired because of the extensive sightseeing on the earlier day, we relaxed for the entire morning. A friend of mine from Kota who was studying in Mumbai came to see us in the afternoon with her dad.  And with them, we again left to see places in Kota.

First he drove us to the Geparnath temple on the Rawatbhata road, approx. 20 km southwest of Kota. Geparnath temple is situated within a stunning location surrounded by canyons on all sides and a waterfall flowing from a height (in rains). It is a trail of defined steps deep down the canyon till the temple. This is the same place where an accident had taken place in 2008 when the ladder on this trail broke (there were no well-built concrete steps here earlier) and left many people trapped which had to be rescued by carrying large scale operations. 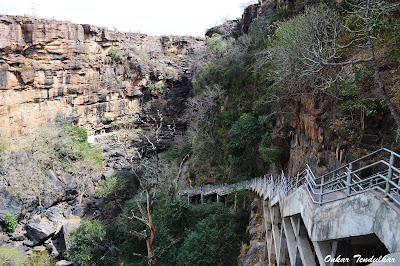 Then we came back to the main city and took a stroll in Bhitariya Kund garden and then the famous Chambal garden along the river. We also visited the adjoining Hanuman temple at Godavari dham. Another interesting place in the vicinity is the Adharshila dargah- which is supported by a single point of a large slanted rock on Chambal banks. We were then suddenly greeted by massive rains which forced us to wind up and go back to the hotel. Garma garam coffee, pakodas and talks back in the hotel while enjoying the rains outside wonderfully summed up our rest of the evening. 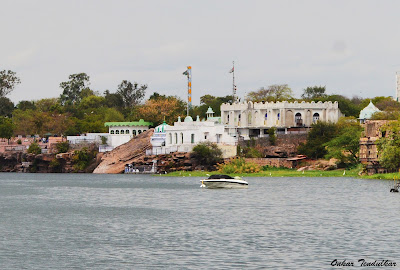 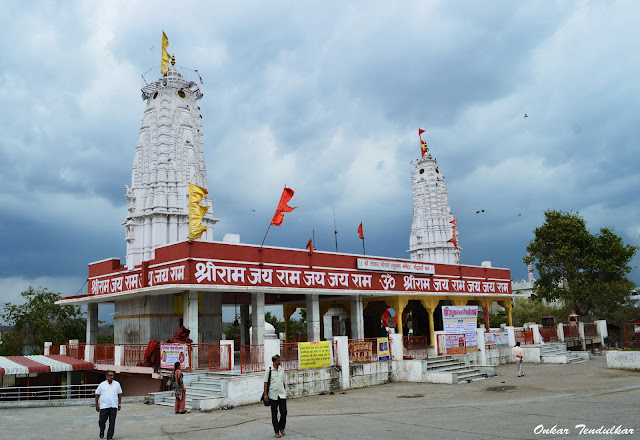 Today was our last day here. And apparently mom was still left with another big task! Shopping for herself and relatives back in Mumbai! My friend made sure to reach our hotel early in the morning and took us to some lanes in Kota’s old city famous for the shops of Kota Doriya dress material and silk sarees..

Finishing everything in time, after a quick lunch we packed our bags and headed to Kota station to catch our Mumbai bound ‘Golden Temple mail’.

A historic 18th century palace on the outskirts of Kota 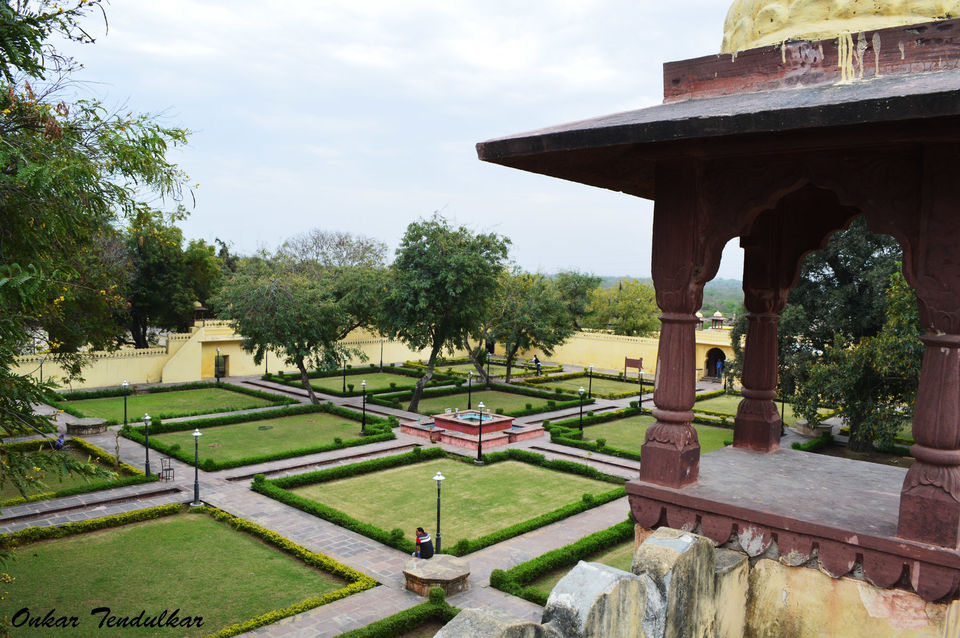 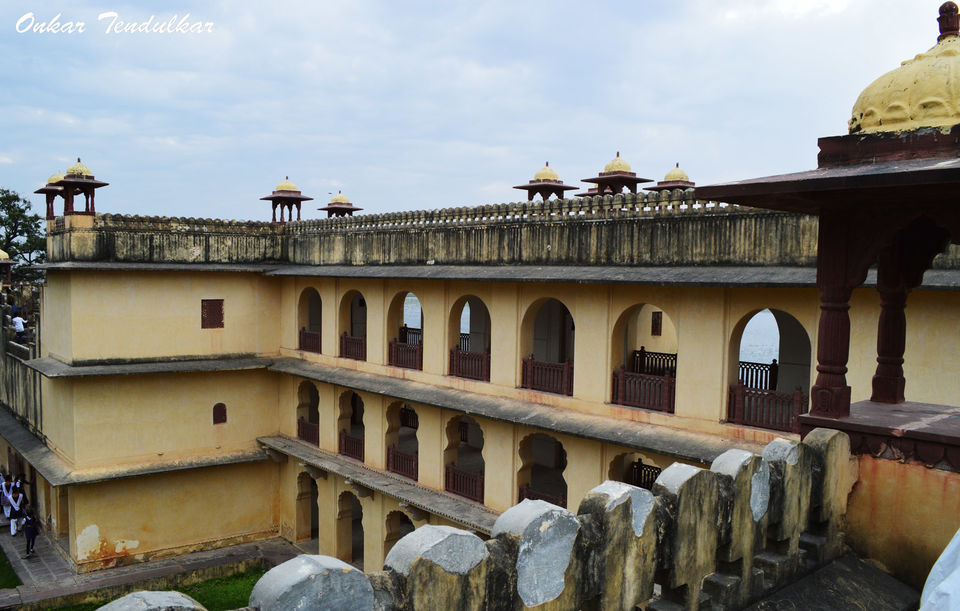 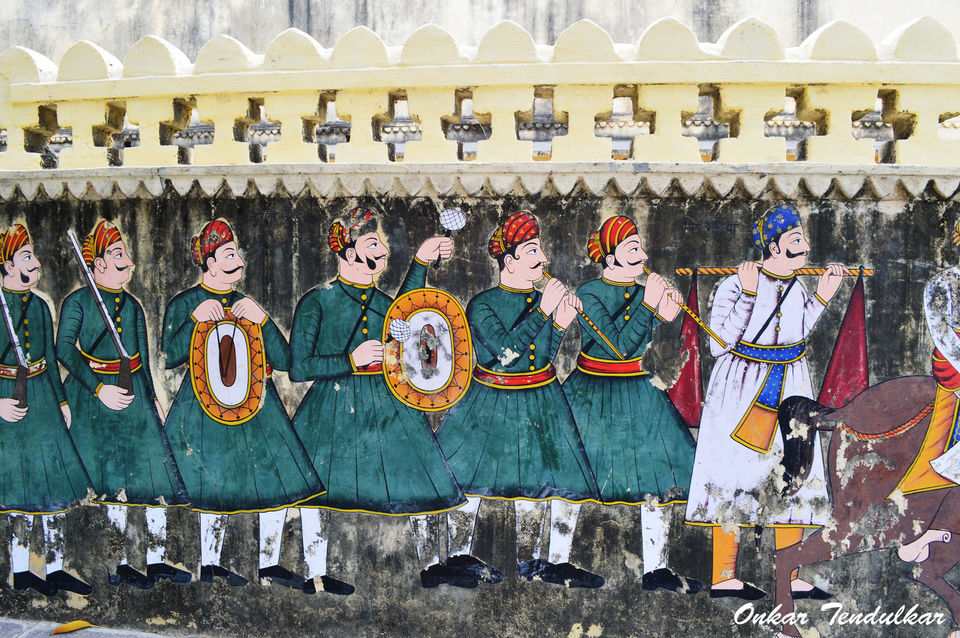 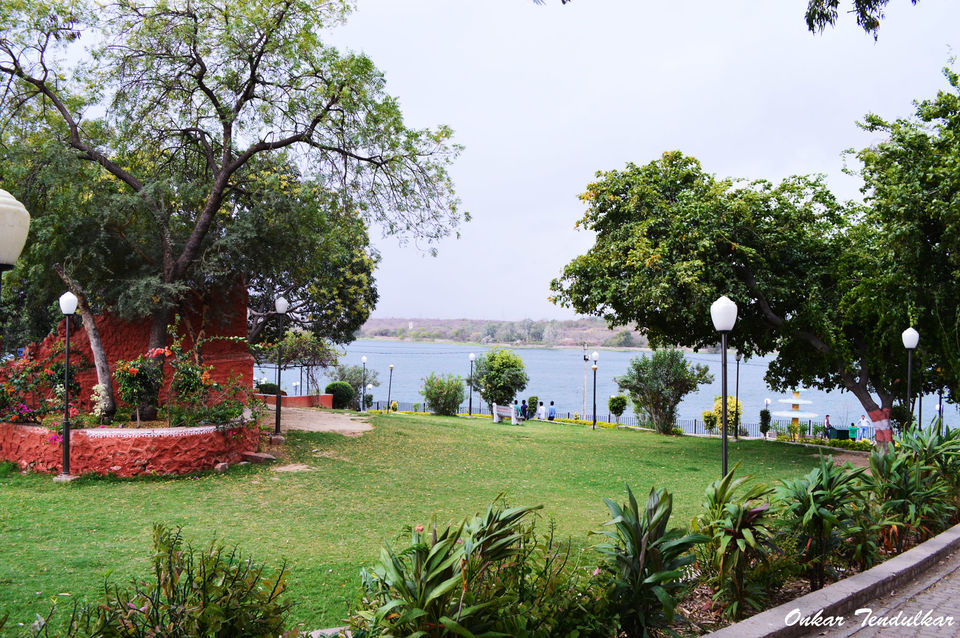 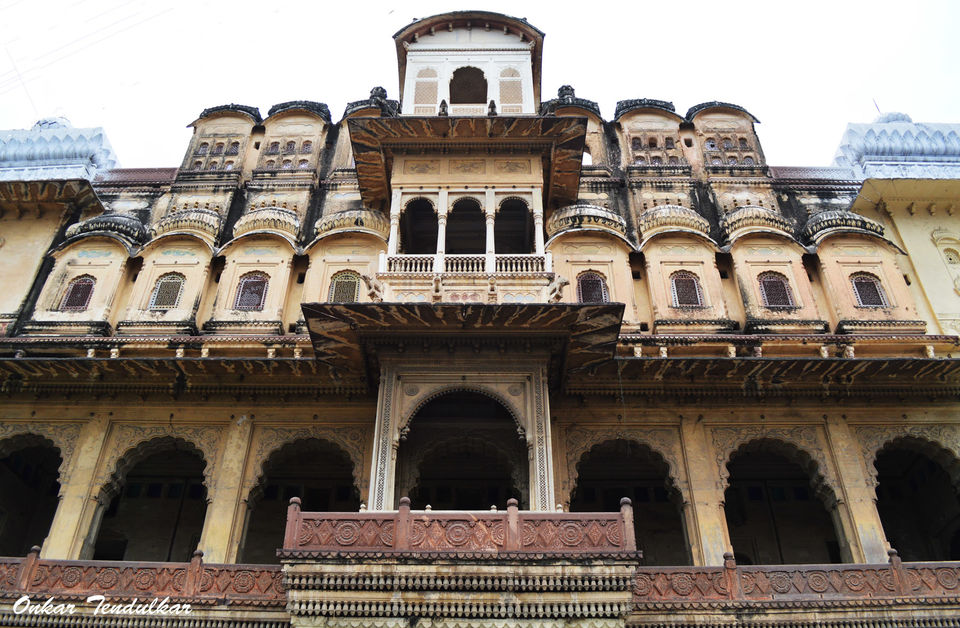 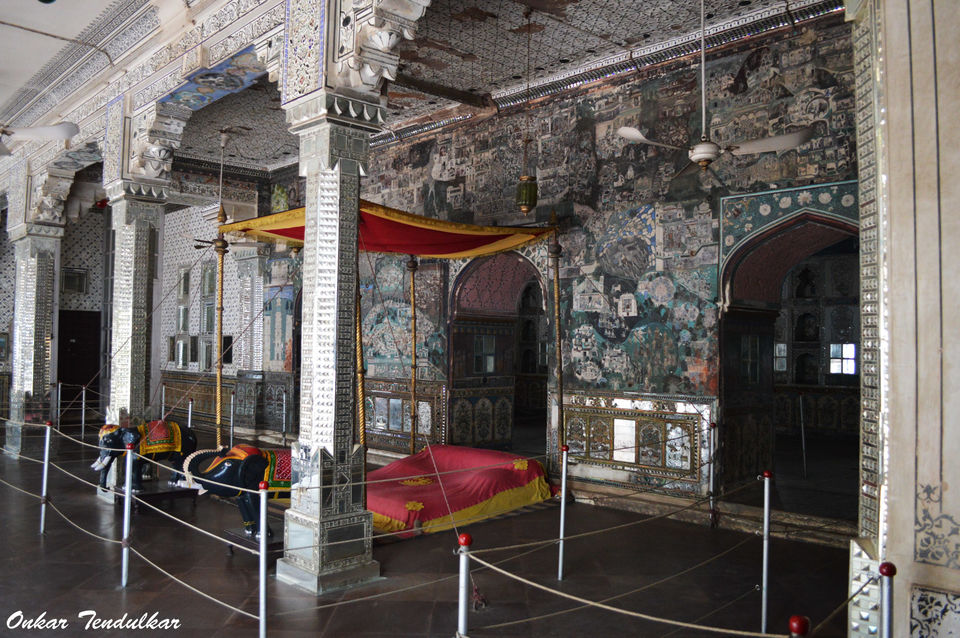 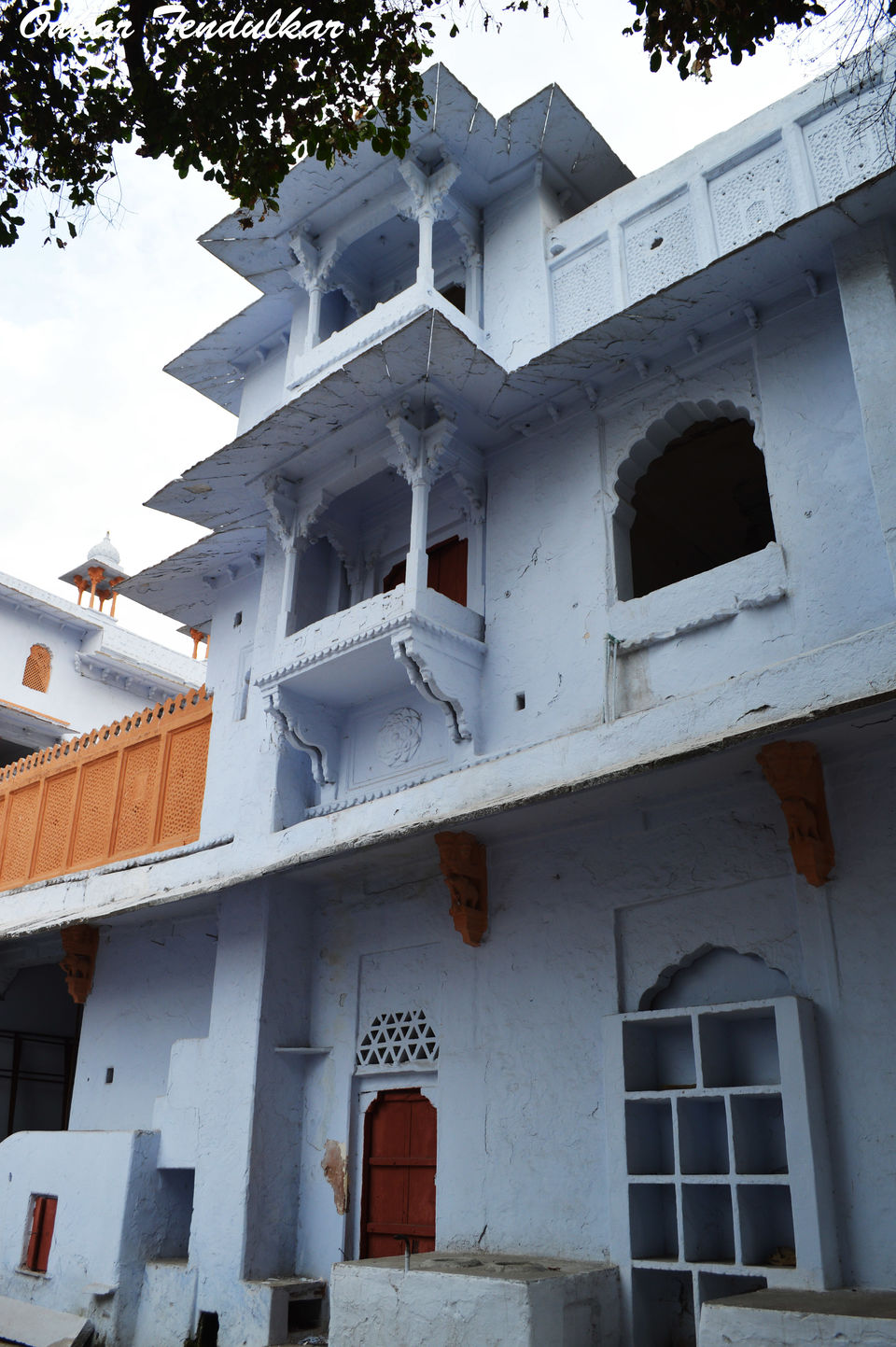 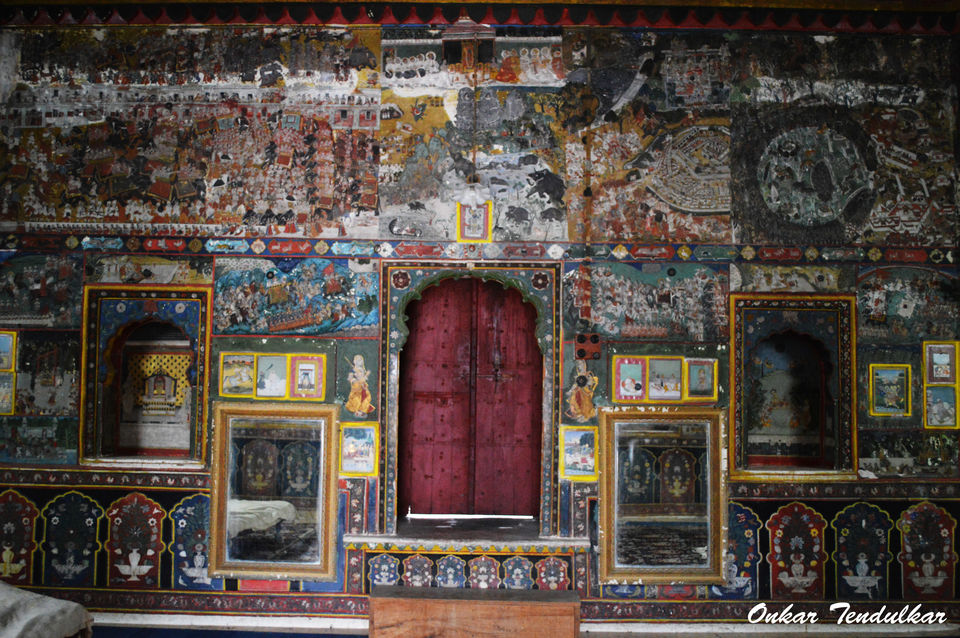 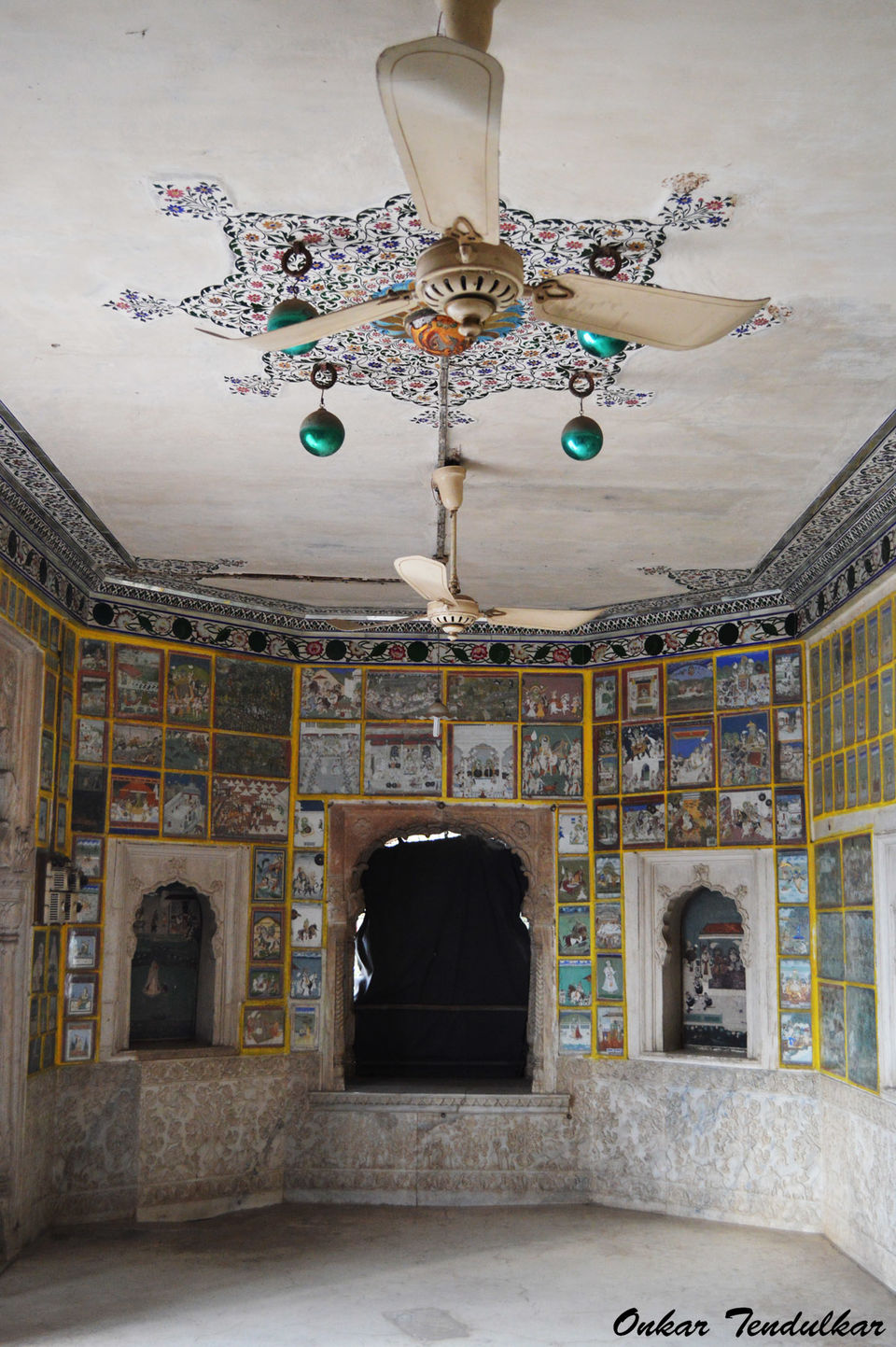 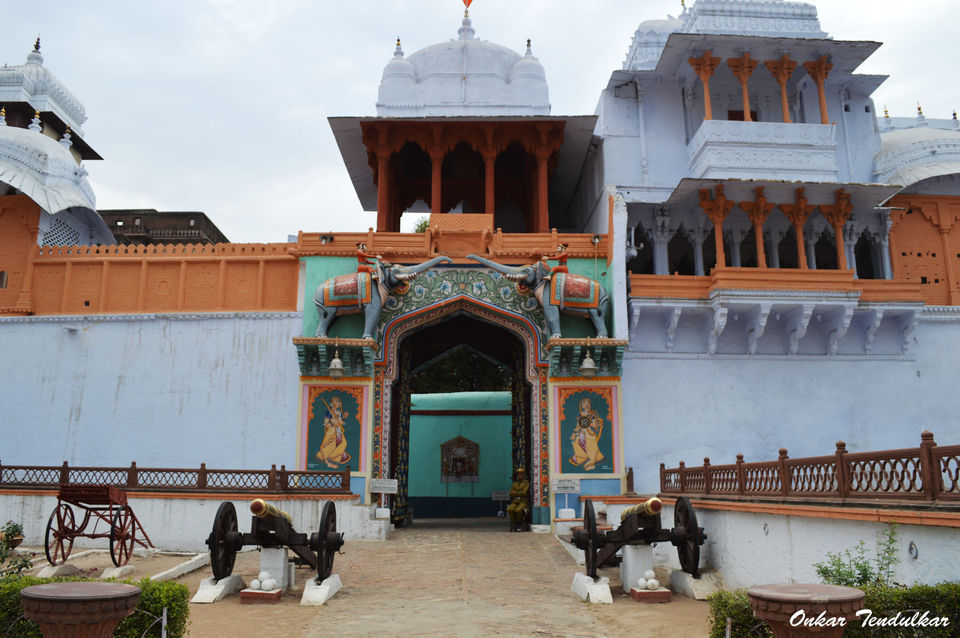 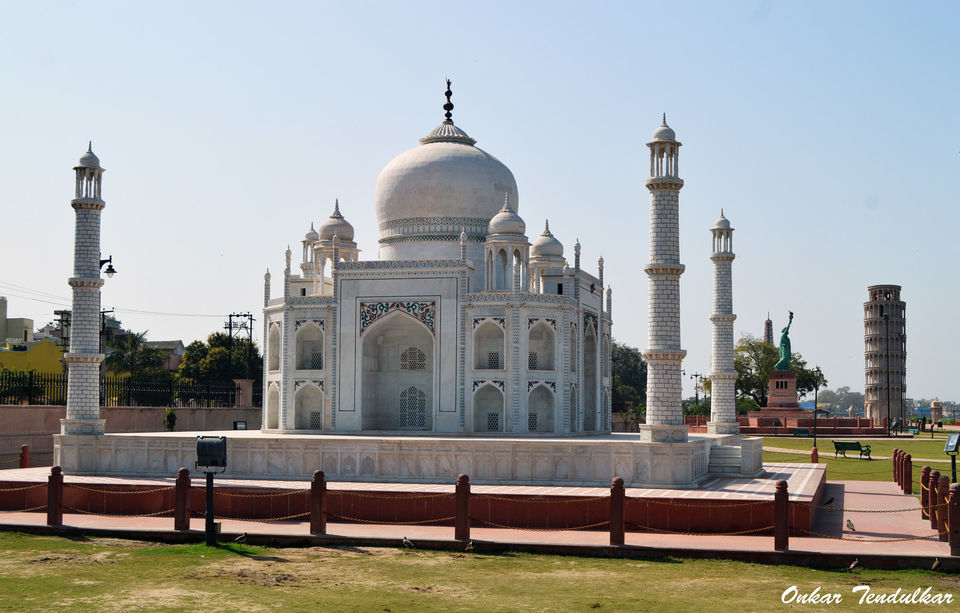 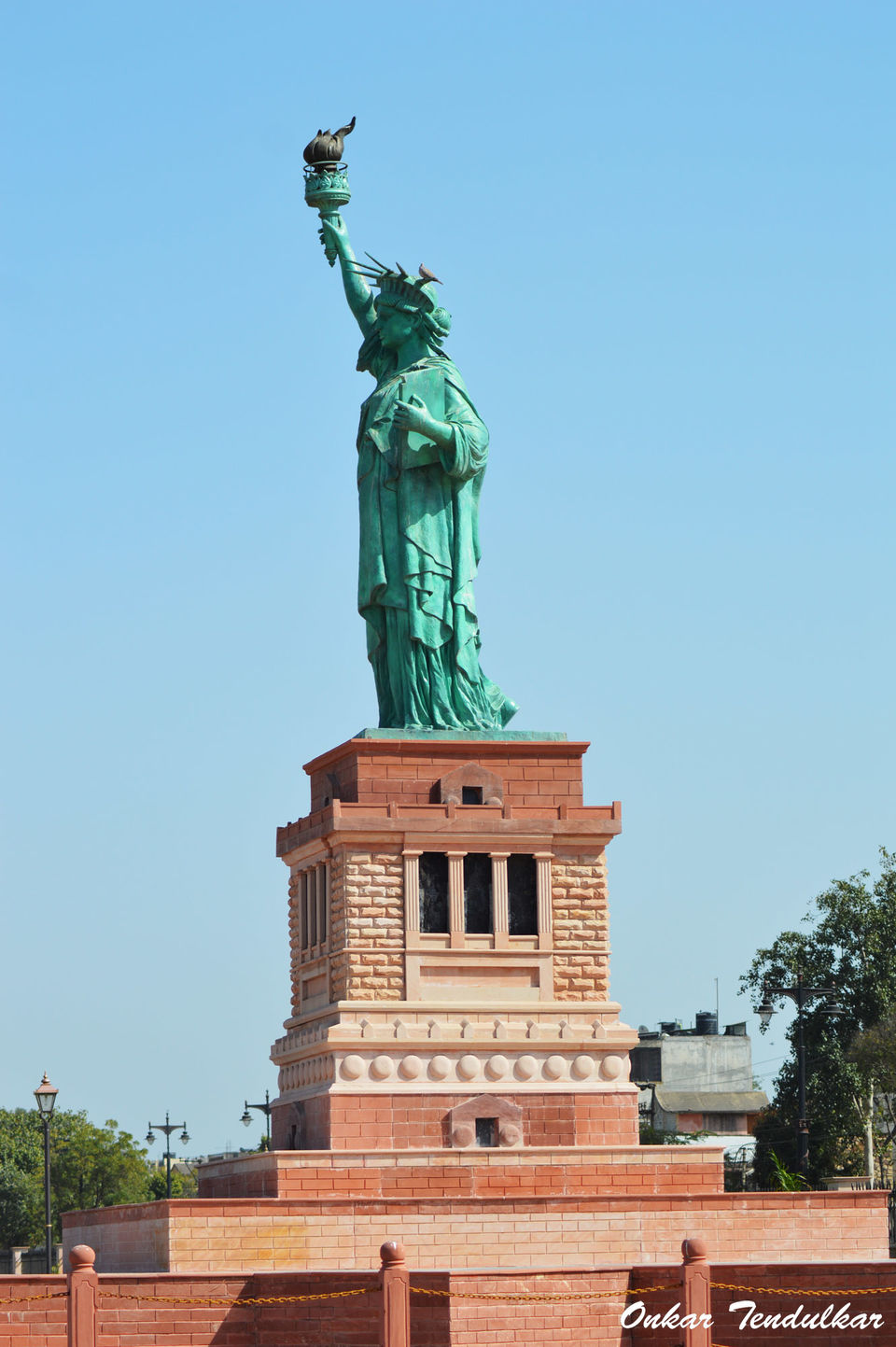 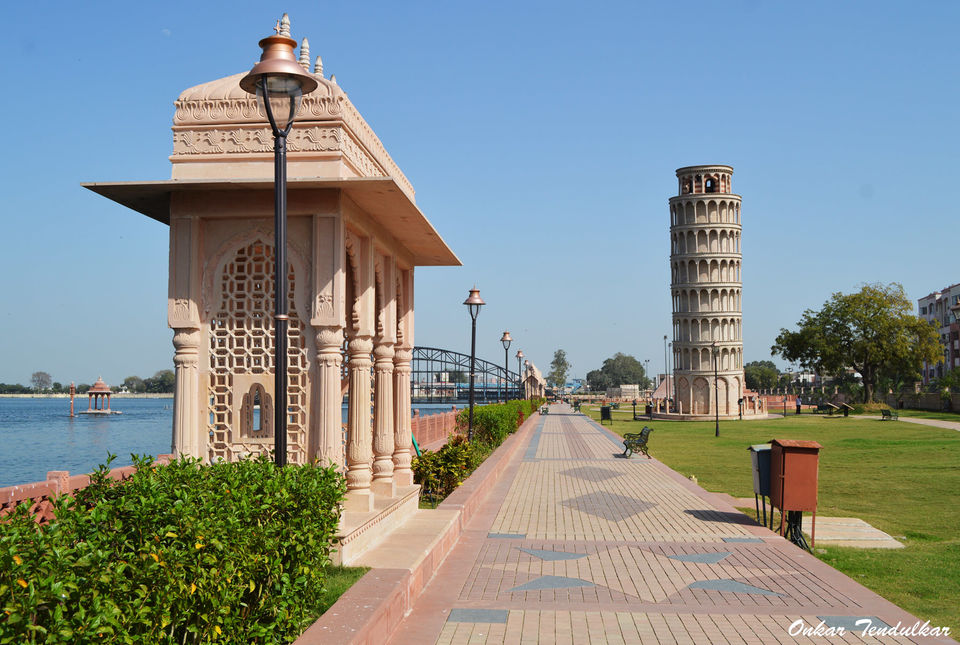