Pushkar Camel Fair Tour 2019- A Celebration Of Culture And Traditions

Every November at the time of the Kartik Purnima full moon, the holy town of Pushkar comes alive with a wonderful amalgamation of art, culture and folk performances that pull in a great number of travelers from different countries. Famously known as Pushkar camel fair, this world-renowned event is the largest livestock fair where camel traders from different locations in India come together.

The fair showcases camels, sheep, cows, and horses dressed in exquisite finery participating in competitions and races to win the attention of buyers. It is one of India's most highly-rated travel experiences, visited by over 400,000 people over a period of around fourteen days. 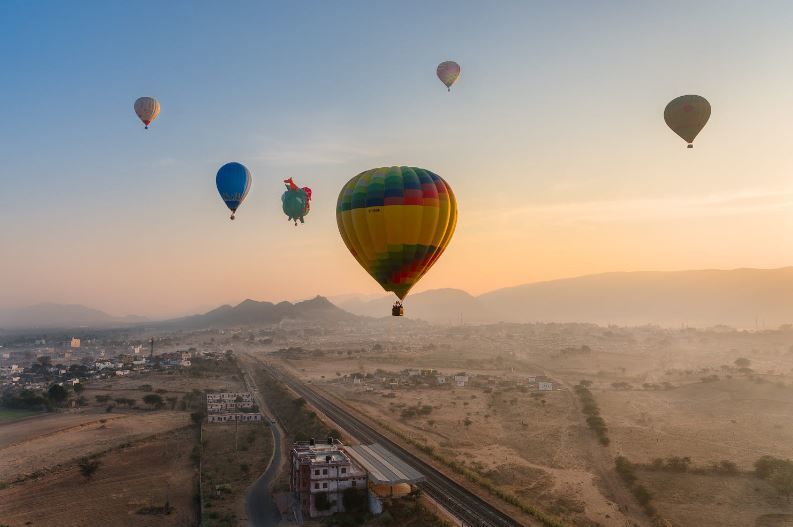 The fair goes on for up to a week where buyers are seen negotiating with the camel sellers. Not to miss is the camel and horse dance which wins the heart of both the tourists and locals. The preparations for the fair start months in advance with traders working tirelessly to train their livestock which they put out for sale at the fair. 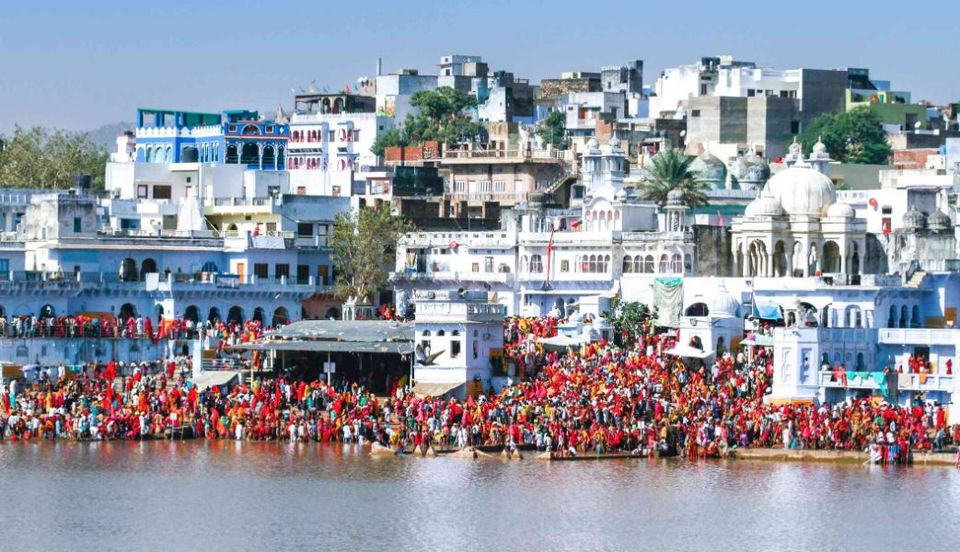 The fair is believed to be around 151 years old and its origins are based on a legend mentioned in some scriptures. According to this legend, Pushkar Lake sprang up when a lotus flower which Lord Vishnu was carrying fell on the Earth. The history of Pushkar Festival mentions that all the 330 million Gods and Goddesses of Hindu religion assemble around this sacred lake to perform a special "yajna" on the day of Poornima (full moon night) to purify themselves from the misdeeds committed in past lives.

A dip in the lake on this day implies washing away the sins as the water of the lake is believed to have healing properties. Due to the observance of these rituals, Pushkar is noted as one of the five holiest cities located in Rajasthan India.

The Pushkar Camel Fair is directly linked to the Hindu lunar calendar. This annual 14-day festival takes place in the auspicious Hindu month of Kartik (October and November), the most prosperous time to absolve past sins. The Pushkar camel fair will be held from November 4th to 12th 2019.

Arrival of the Camels: October 30 to November 4

Competitions and Activities: November 5 to 12

The fair has two components: camel trading and religious rituals. The camel trading-which is the main attraction for tourists-happens at the beginning. Pushkar Fair holds great relevance for Hindus as many pilgrims from all over India gather at Pushkar lake to take a sacred bath and offer prayers on the last day. 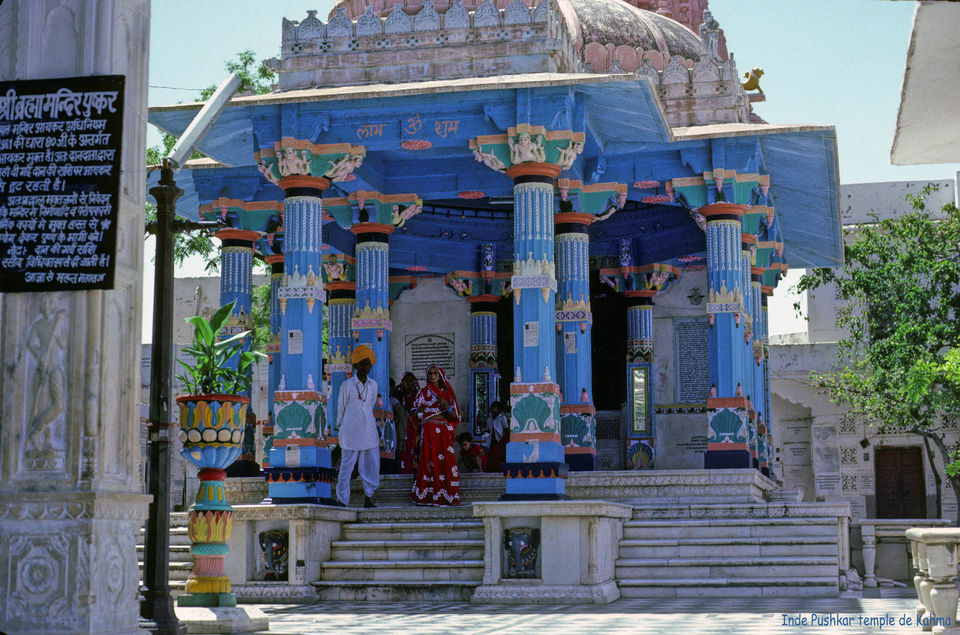 Visiting the famous temples of Pushkar is something you should not miss in your Pushkar Camel Fair Tour. It also introduces you to the Hindu religion. Attending evening prayer at the local temples ends the day on a spiritual note. 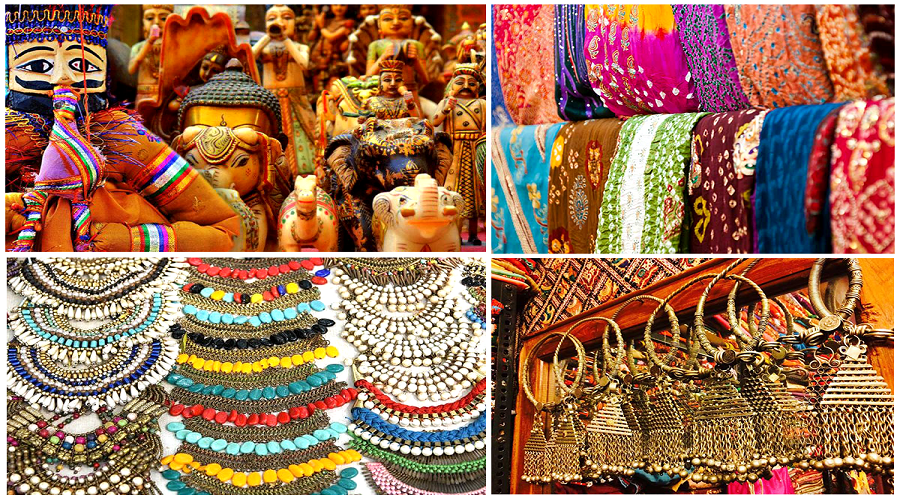 Aside from being an attention stealer for animal lovers, the fair presents a perfect kaleidoscope for photographers. The vivid blend of colors put forth in colorful textiles, Hot air Balloon ride. handicrafts, and jewellery exhibited in small kiosks create a beautiful background for taking selfies,

These tiny shops are a treasure for shopaholics with a wide range of fancy craft items made from leather, wood, and silver. One can also buy antique jewelry, tye-dye dupattas, and other local craft items to be taken back as souvenirs for your family and friends. The turban clad men roaming around at Pushkar Mela infuse a fairytale touch to the frolic atmosphere. 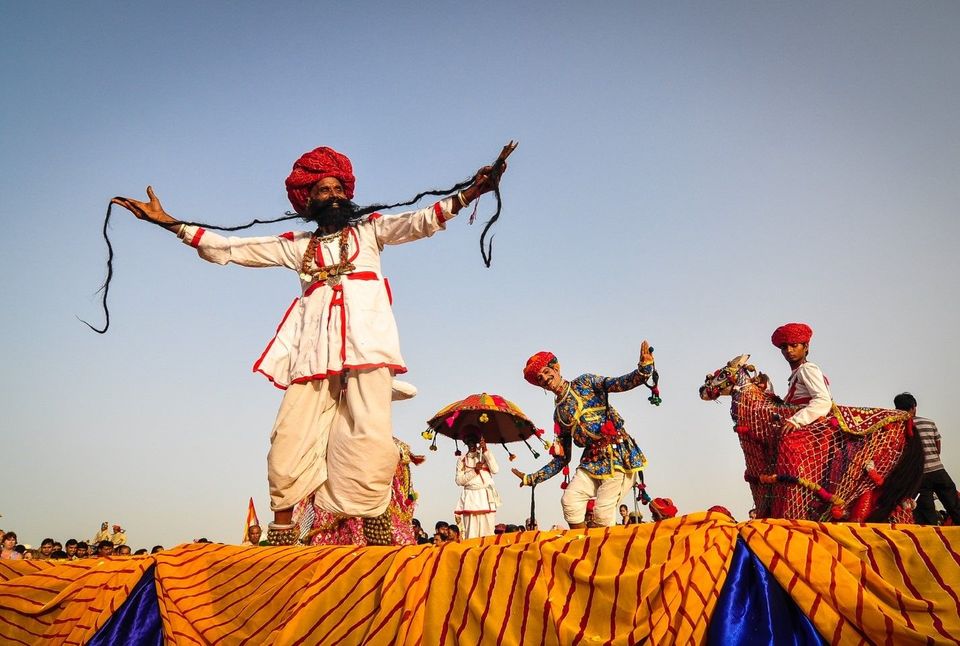 The fair also features " longest mustache competition", "bridal competition" in which locals and foreigners participate with great fervor. The most striking part of the Pushkar camel fair tour is the art and craft exhibitions which lend a cheerful vibe to the atmosphere with an explosion of colors. The phenomenal performance of folk dancers and musicians presented during the fair is lauded by each and every visitor. 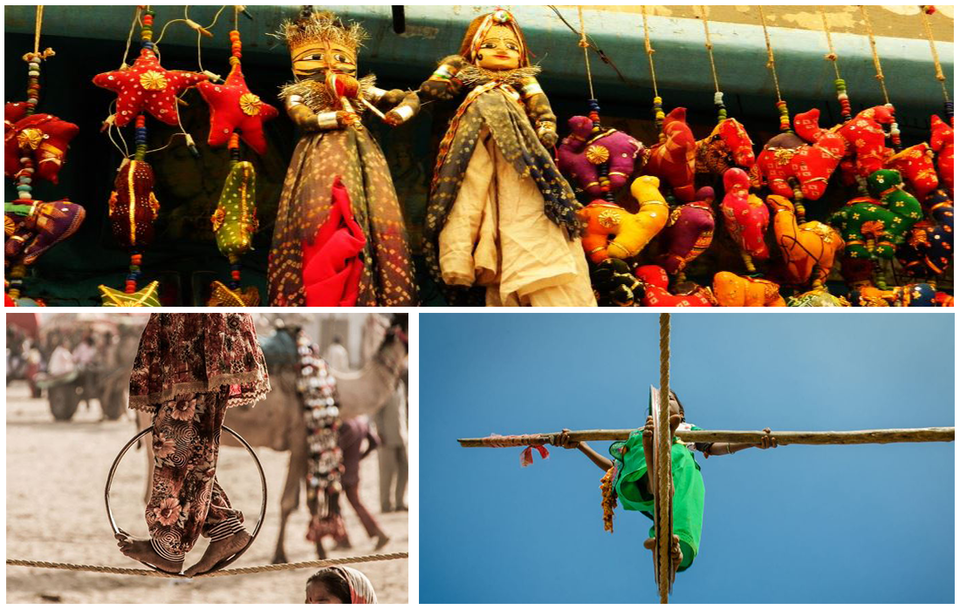 The rich culture of Rajasthan is beautifully portrayed in this fair. So, no matter what type of traveler you are, there is something for everyone to keep you occupied. The snake-charmers, the fortune tellers, the puppeteers, the acrobats, all of them contribute in making the fair a major crowd puller. 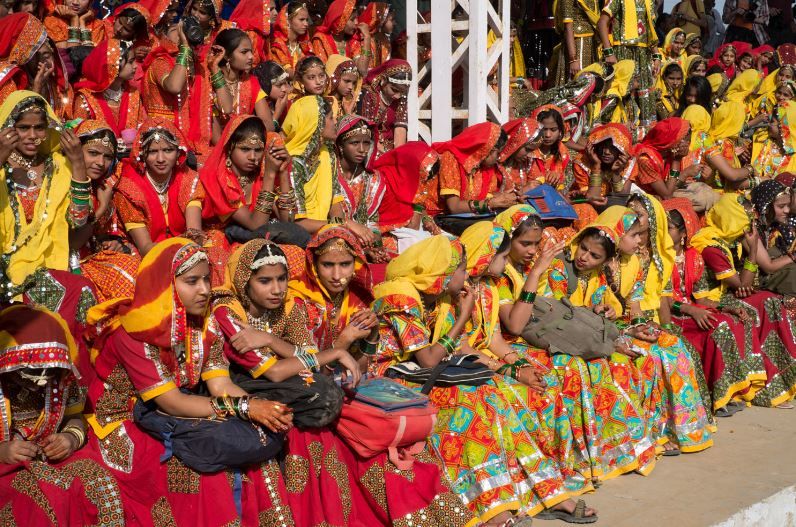 Once you enter the fair venue, the colorful traditional markets, luxurious tents or the highly popular camel and horse rides, everything promises to transport you into a mustache and bridal competitions the seventh heaven. Consequentially, this town attracts the highest number of international tourists who start pouring in just a week before Kartik Purnima, the day on which the fair concludes. Pushkar mela 2019 appears to be the best way to spend your vacation in India and to sample the depth of Rajasthani culture. 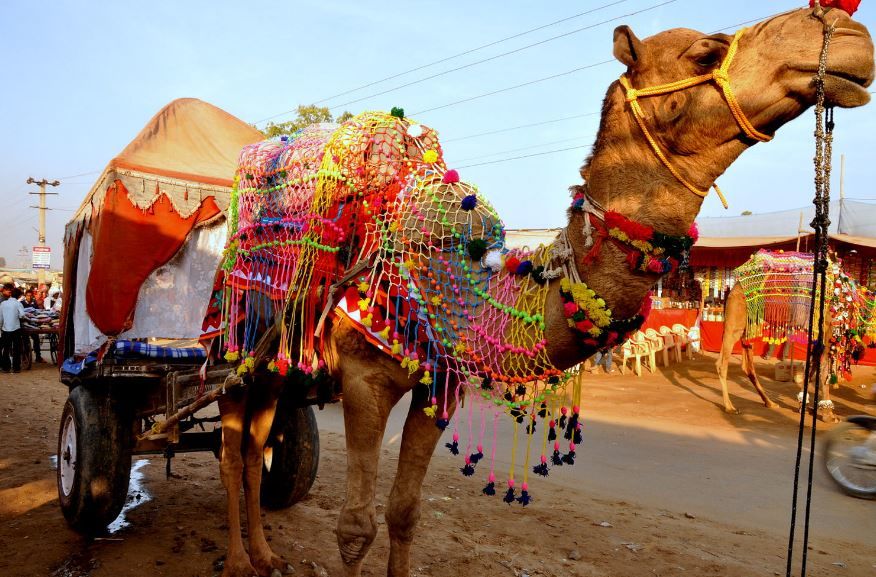 Pushkar fair tours kicks off from Delhi with a brief visit to the eminent tourist attractions located in the capital of India like Red Fort, Humayun's Tomb, Qutub Minar, India Gate and markets of Chandni Chowk. Other cities covered in this tour are Jaipur, Pushkar, Udaipur, Jodhpur, Jaisalmer, Bikaner and Mandawa. These places store lots of sightseeing opportunities that bring you closer to the history and culture of Rajasthan. You get to spend a day and a half at Pushkar fair to experience fun and frolic to the fullest.

Where to Stay During the Pushkar Fair?

To savor the essence of the Pushkar fair tour , luxury tents are installed at several sites to allow the guests to relax and enjoy the slow music as the fair draws to a close at night. Since the fair attracts a great number of tourists, it is advised to book your accommodations days in advance to avoid last-minute hassles. Alcohol is strictly prohibited at the fair to ensure the safety of tourists.

Being a highly crowded place, the travelers are recommended to carry limited essentials and to keep an eye on their belongings. You can also opt to stay at luxury hotels in Pushkar which serve as excellent options if you wish to visit other attractions in Pushkar town.

How to Reach Pushkar: 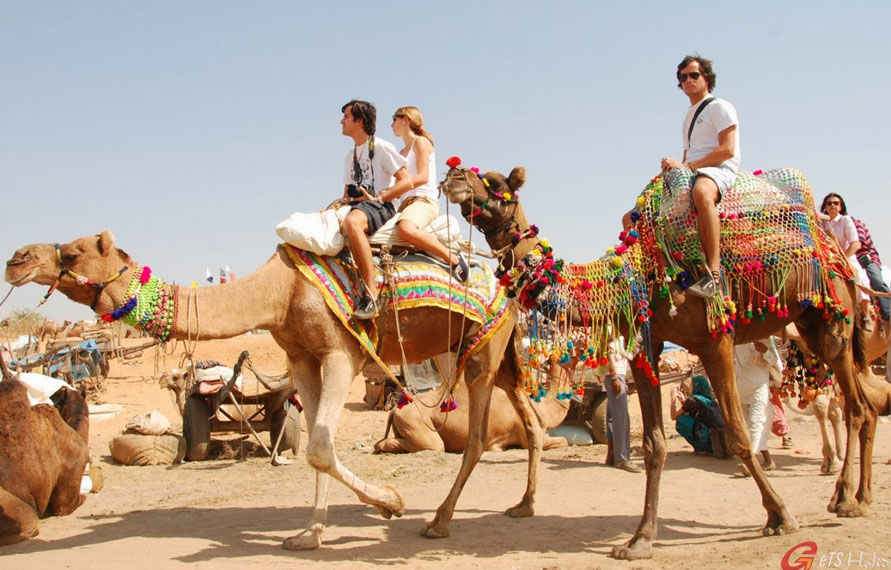 The easiest way to travel to Pushkar is to take a flight from any of the major cities to Jaipur International Airport. You can then hire a taxi or cab from Jaipur which takes around three hours to reach Pushkar. Another route that you can take to reach Pushkar is from Kishangarh Airport in Ajmer which is around 50 kilometers away from the town.

is the best opportunity to view the cultural treasures Rajasthan has to offer. The youthful energy exuding in the fair makes you forget about all other things. Losing yourself completely in the festivities seems to be the only way to enjoy this grand celebration of the culture and traditions of Rajasthan.

It's a once-in-a-lifetime opportunity to witness the color, spectacle, and carnival of one of the last great traditional fairs!

> Top 10 Historical Forts and Palaces of Rajasthan to Experience Royalty

> 8 Famous Shopping Cities to Explore the Handicrafts of Rajasthan