A Non-Believer's Trip to Haridwar 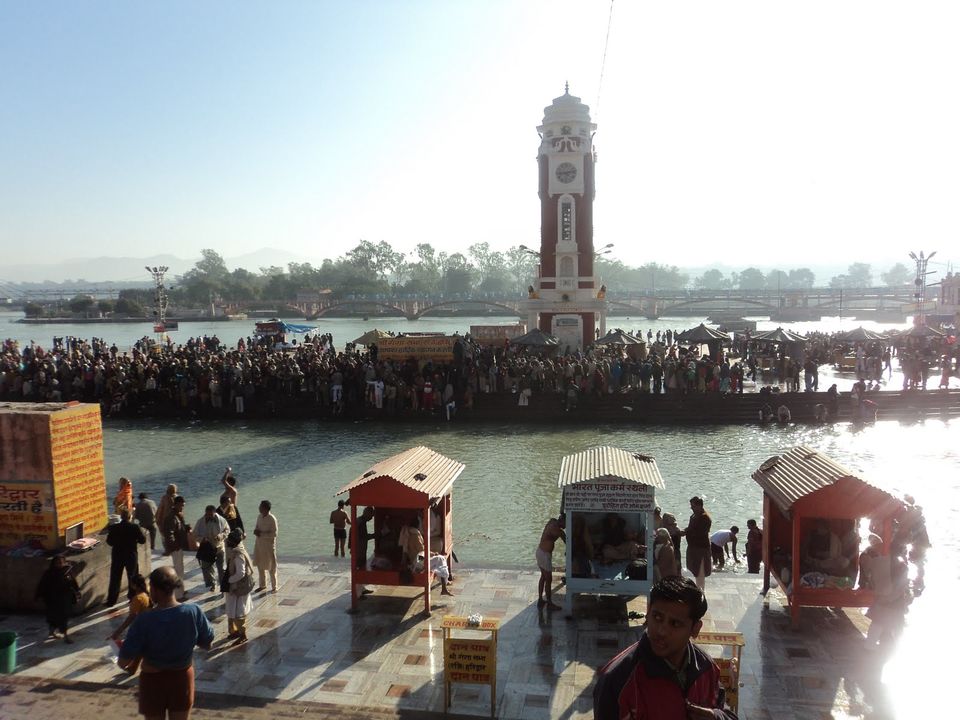 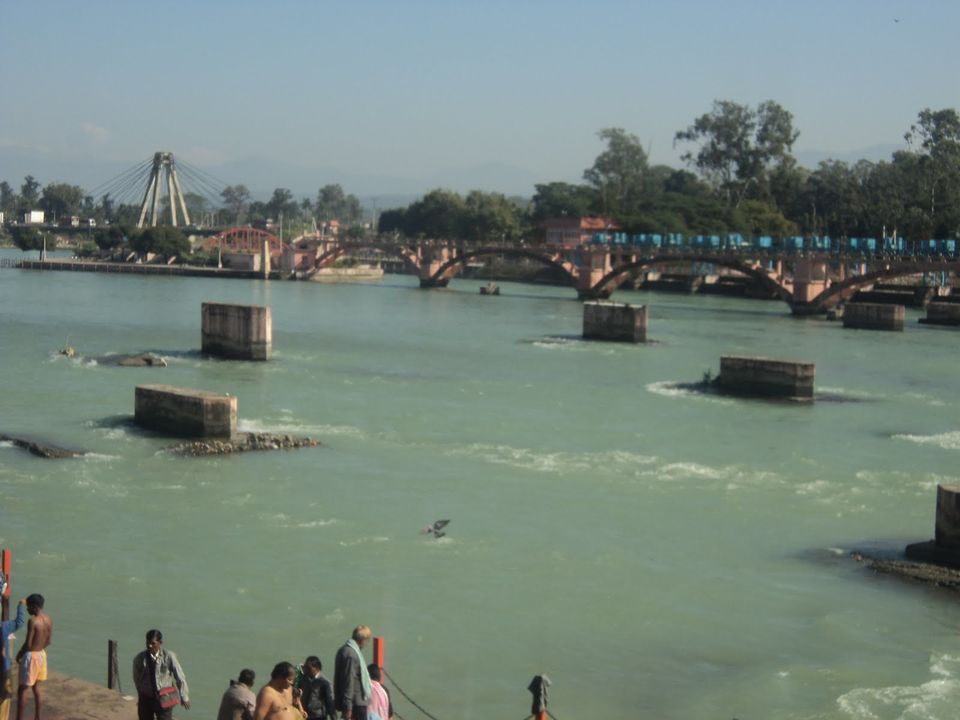 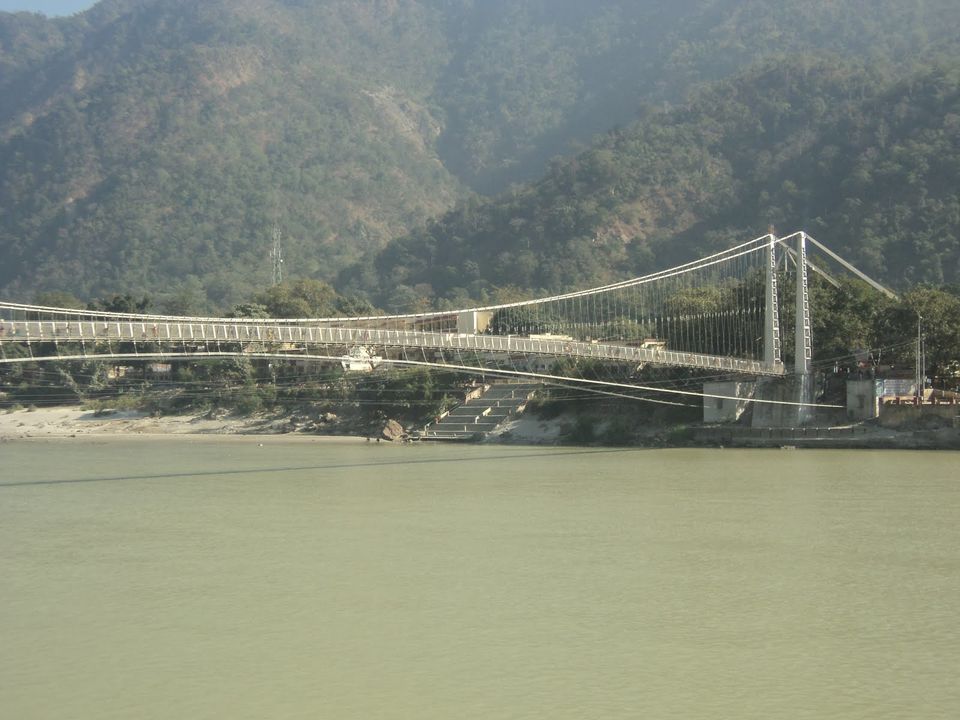 bridge across the troubled water 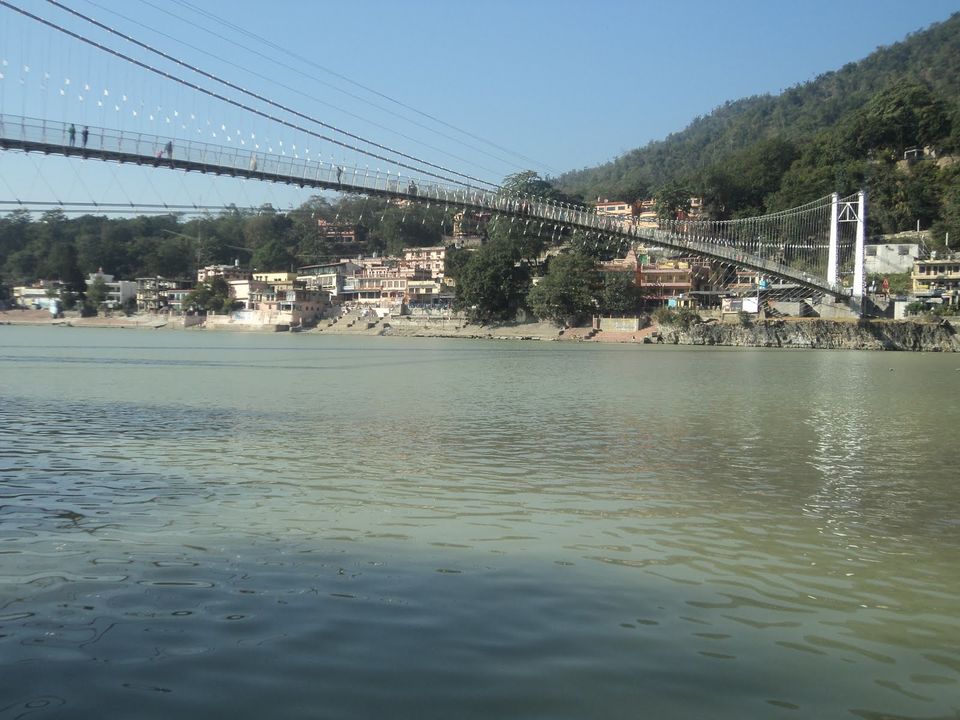 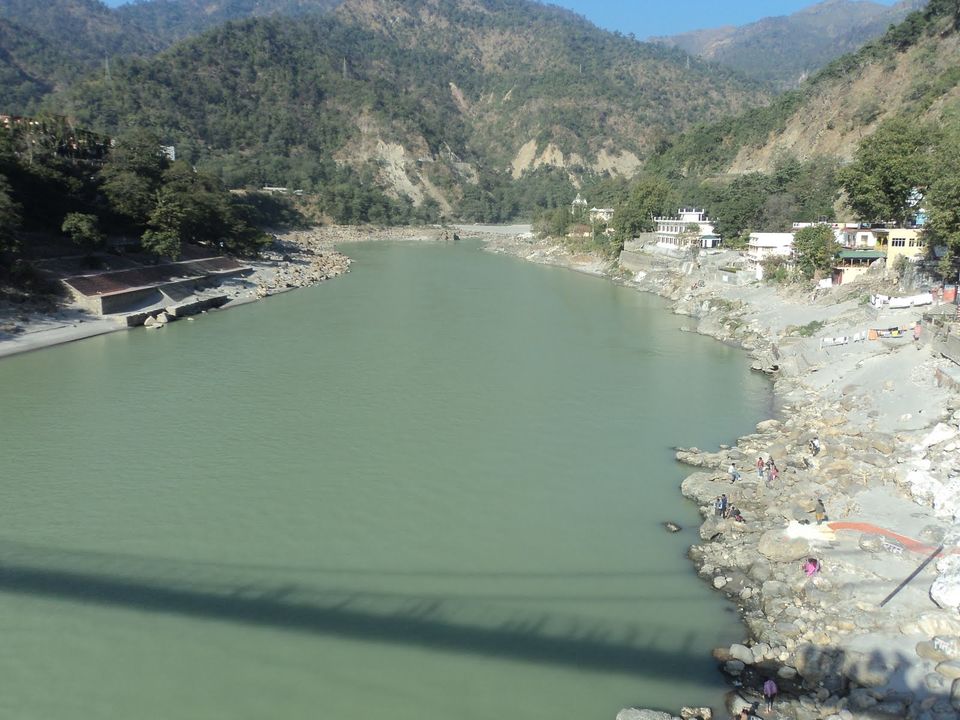 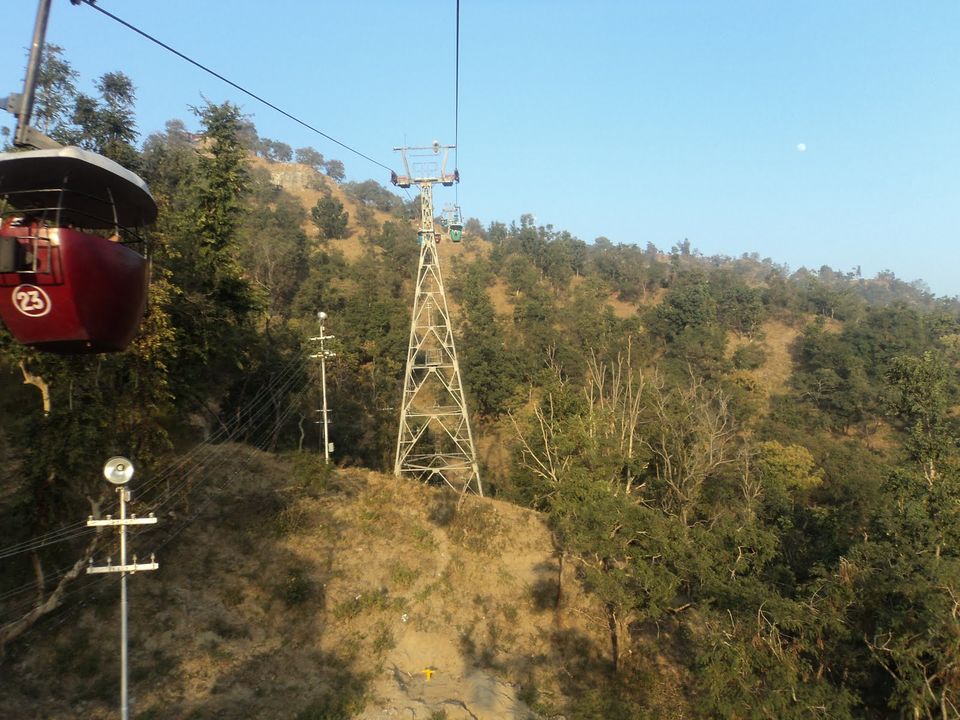 the edge of the world 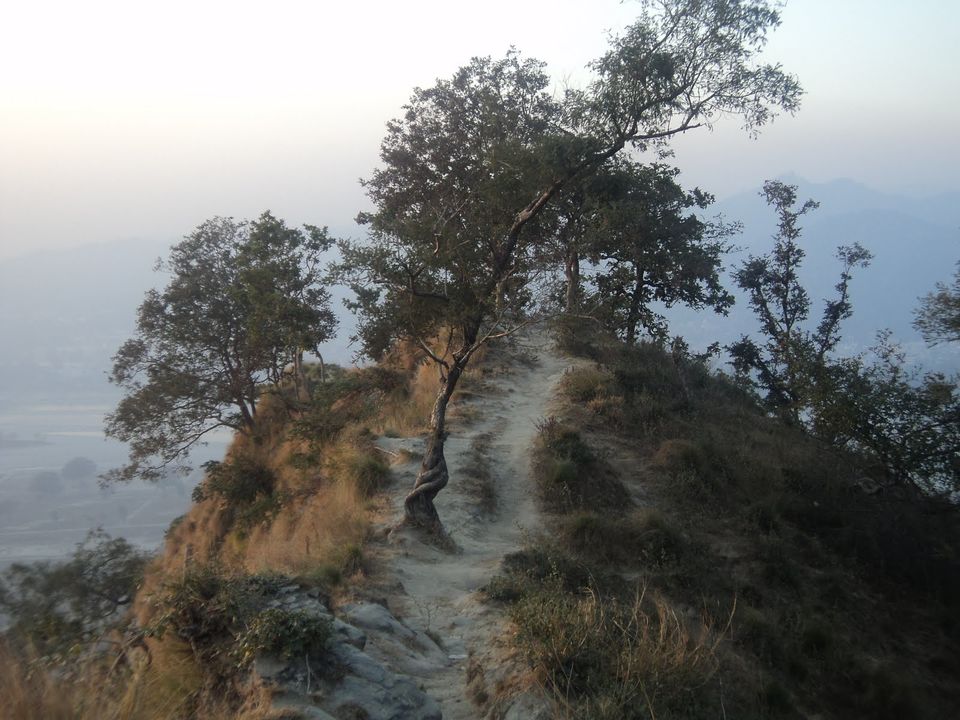 My aunts were in town and they, like good little religious people, asked me to accompany them for Ganga snaan (bath) to Haridwar. I left as I was.

Ms. D. Mukherjee, my aunt and the cutest heavyweight champion of Indirapuram, went to the Sulabh Sauchalaya (Public Toilet), and we, the then directionless fellow travelers to Haridwar, got on the wrong bus. Needless to say Ms. D. wasn't amused. As it turned out my aunt's horrible prediction was true. The bus was newer, but infinitely slower.

Like good little Bengali people, Ms. D. made us carry a bottle of water right from home. Incidentally the bottle did reach a hotel, just not ours.

The idea of dirt doesn't really register with people in Haridwar. When we informed the manager at the OM Hotel that the rooms were dirty, he just couldn't comprehend what we meant. Miss Koel (Ms. D's daughter and my sister) hated the hotel. "I hate it," she said and walked off the building. We rented the rooms 101 and 103 for the night. After a family dinner and a glass of hot milk (bought from the local dairy), we retired for the night.

Unfortunately, my cousins, Koel and Tun, had other devious plans. A complete episode of Splitsvilla (another brainless MTV series) completely killed the night. (Hatred for MTV -- all time high.) A tag-team match between Rey Mysterio and Edge played for another hour and we finally called it a night. Between snatching the blanket back from Tomal, my self-centered, photographer cousin and having nightmares about crazy women from Splitsvilla shouting "Bahar aa tujhe dekhti Hu", I had a peaceful night's sleep.

What seemed like 15 minutes later, my hitherto unmentioned other aunt, my Sejo Masi (third aunt) started banging on the door as if the hotel was on fire. The first trip out of the blanket froze my very bones. The self-proclaimed Laurel of the group gave us the bad news. We had to get up.

Ms. D. Mukherjee, the obvious Hardy of the duo, walks in and states rather coldly, "We are going for a dip in the holy river Ganges right now".

After the tragic realization that we had forgotten to bring a proper towel along and 30 minutes of bad religious songs (Bollywood song converts) blasting from the procession downstairs, we leave for the "holy Ganges".

Wading through multitudes of sick, desperate, holy, hopeful people; we finally reach the concrete steps of the Ganges. The first sight of this mighty river overwhelms you. It almost pulls you towards itself. I am the first to strip and jump into the river. I don't know how to swim, but the ghats here are not deep or fierce. There are chains too to help people hold on. Tomal and I take our first dip in the icy cold water. It freezes the very soul, as they say. Flowers and does float by as I stand waist deep in the river.

Twenty amazing minutes and plenty of embarrassing photographs later, we sit on the banks with our sunglasses on. Weird gestures and ridiculous poses (including me meditating) get captured on the camera. Frozen memories of the freezing waters.

The debate on the merits of traveling to Hrishikesh was decided in the favor of the heavier party. We take a shared auto-rickshaw to Hrishikesh. Ms. D., my Choto masi (youngest aunt) drags us to the two famous bridges, Ram Jhula and Lakhman Jhula.  The walk to the second bridge on the other side through the banks of the river was one of the highlights of the trip. The peaceful environment of this place pervades our every senses.

A mini photo shoot on the river banks, discovering ata (Sugar-apple) trees, the cunning cute monkeys who know what you are hiding, the little girl dressed as Shiva, the never-ending winding stairs to the auto-rickshaw stand, the rafting boats, and the huge river fishes were all vivid images of the Hrishikesh trip. Well, a friendly cow even tried to snuggle with me on the Ram Jhula. Now, that's a legend.

Tomal wanted to ride the Udaan Khatola (a weird name for the ropeway carriage) once we came back to Haridwar. I went with him. Good that I did. We discovered one of the best spots in the world. A thin ledge took off from the mountains. We followed to the very edge and there we stood looking at the mighty Ganges and its twists and turns around the plain. The whole of Haridwar lay below us and we had the god's view.

If the trip to Haridwar is to be re-witnessed through a pictographic narrative, it will be scattered with Thomas' self-centered photography in which I was a willing conspirator. Picturesque, that's the word probably. We never could capture what we witnessed that day. Not even a part of it. Not the raw edifice of the stone mountainside. Not the detailed, twisted trunk of the crooked tree that stood on the very edge. Not the small, green island hidden in the water. We were higher than the sun. We were in the unreachable lands of the sages. We were at one of the very edges of the world.

They call this place Devnagri, the land of the gods. As a non-believer, two aspects of Haridwar struck me very powerfully. First, the almost hypnotic, peaceful experience of sitting on the banks of River Ganga and second, the sadness of the misfortuned people flocking to this place looking for miracles. The desperate and the destitute have scourged the paved concrete banks of this once free mighty river. Humans have channeled the very flow to this once untamed river for their pious purpose. Ganges is tamed to clean the sins of people. And Ganges still flows carrying and bearing the sins of the desperates. The banks, now, are the few hunting grounds of religious commerce, the coin picking fortune seekers and cheats.

Koel's rather apt diagnosis of  my mental condition did put a stop to a lot of similar arguments.