Gujarat-The land of lions and legends! 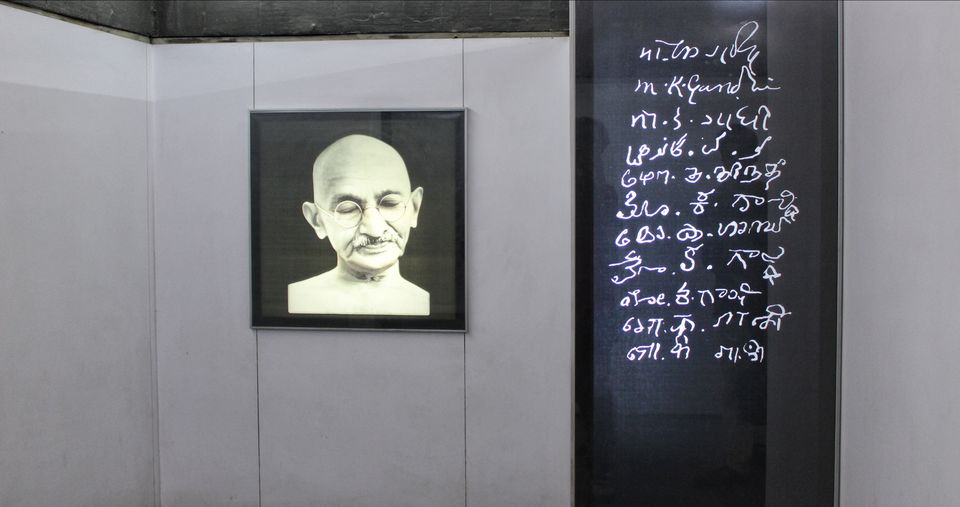 Gujarat is the Indian state that has been the cradle of evolution of mankind, right from the Indus valley civilization to the proposed flying bullet trains, the state that has been the epicentre of trade from one of the ancient ports of the world, the Lothal, to the current trade centres of Ahmedabad and Surat. Gujarat has transcended itself through the rules of many prestigious kingdoms like the Mauryan Empire. It has also witnessed many wars and invasions, and stories of success, failures and deceptions are engraved in its heart. The same Gujarat gave birth to the Mahatma Gandhi and has been the ground for his movements including the Dandi march. And in the latest pages of its rich history lies the poignant mishaps of the earthquake of 2001, the Godhra train burning and the communal riots that followed.

But Gujarat has evolved since then, as if a Phoenix bird, and is now synonymous with business and infrastructure capital of India.

No riots have happened since then and the state exhibits the beauty of the amalgamation of various cultures not only in its splendid architecture but also in the fabric of everyday lives. And my decision to explore this state doesn't need any more reasons, if not, the tempting Gujarati sweets.

The Sabarmati river has been cleaned and the riverfront developed. 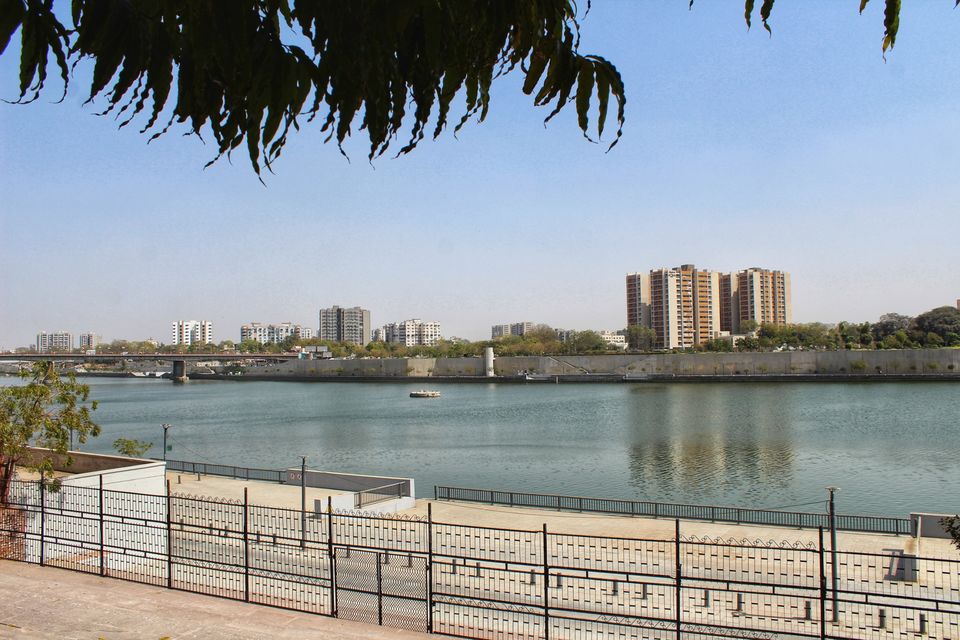 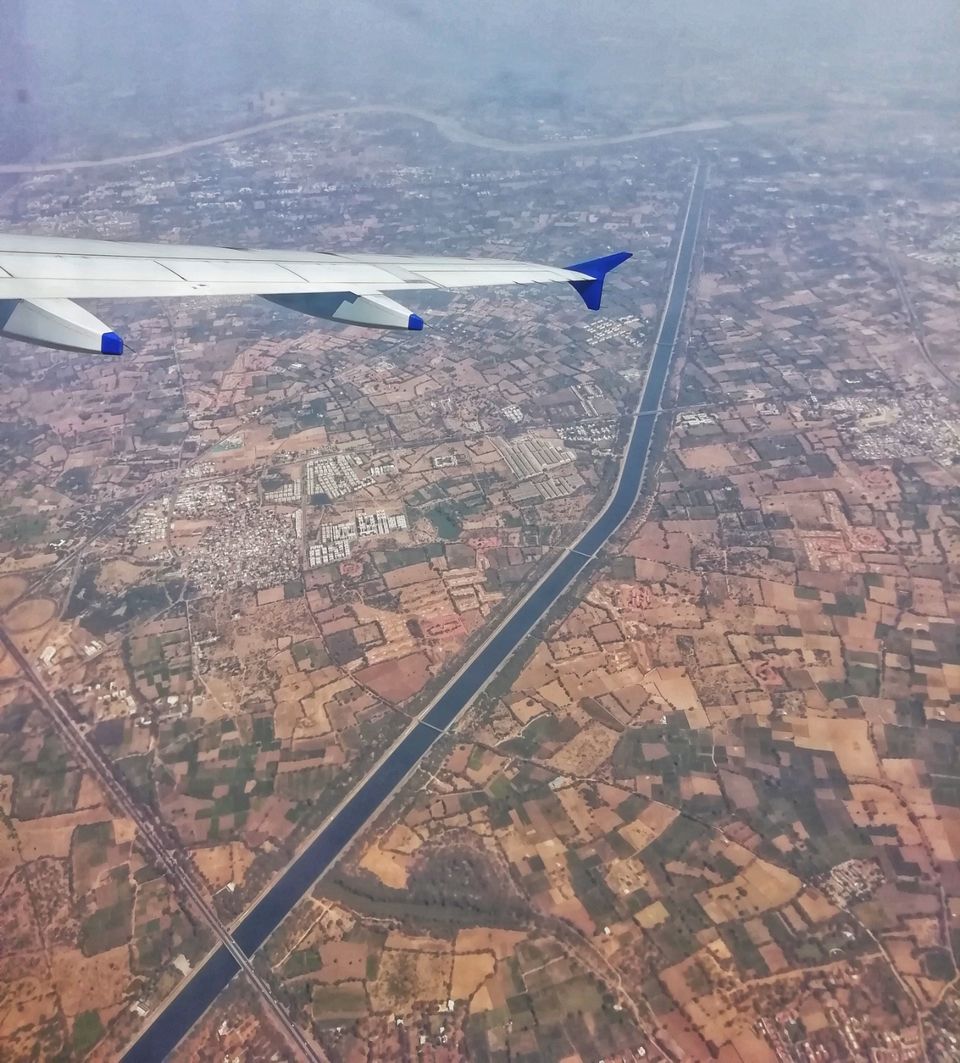 When I woke up from my sleep and looked below, I could see vast stretches of barren land, and it's true, Gujarat has always been an arid state with temperatures reaching upto 50 degrees in summer. But as the flight was about to land in Ahmedabad, you could see the first glimpses of much talked about success stories of Gujarat. You could see the wide networks of water canals and highways criss crossing each other. Greenery started appearing in patches as the flight moved more towards Ahmedabad. The solar panels are placed over parking lots and building roofs.

The roads in Ahmedabad is wider than most of the other state capitals and it has rapid bus transport system. That is, you can see separate lanes exclusively for state run buses and in bus you are never caught in traffic blocks. The tickets are purchased from the station, built in between and then you board the bus. This is something worth adapting to other emerging cities as well!

Though Ahmedabad is the capital of textiles and sweets, I put off the plans for later, and rented a cab to Vadodara. The Ahmedabad Vadodara expressway revealed another example of how highways are to be built. This is the National Expressway 1 and it more than halved travel time between the two cities (a distance of 93km) to 1 hour!

In the rapid bus transport system, these bus stations double up as ticket counters. 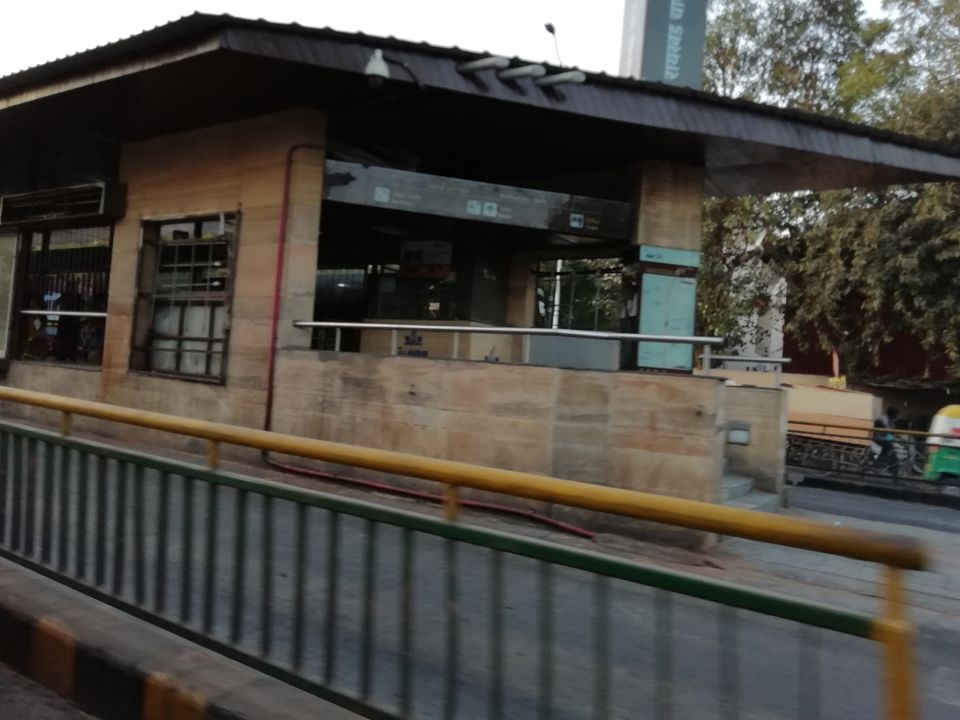 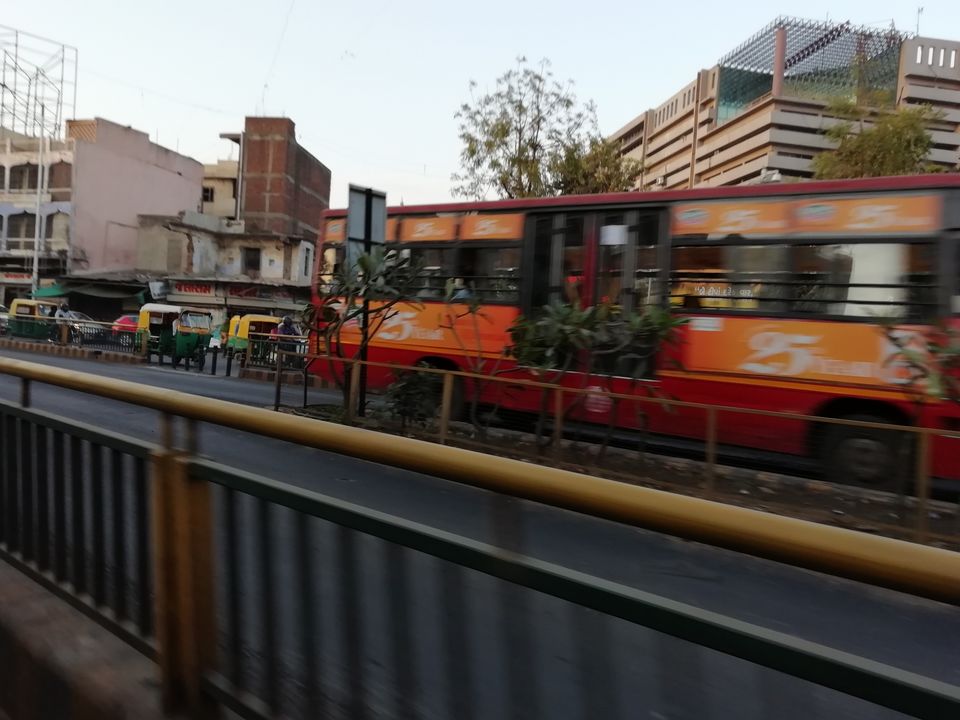 On the way you can take a diversion at Anand to visit the factory of Amul, 'the taste of India'. It is here the white revolution happened. Amul is the most celebrated co-operative success stories ever written in India.

Vadodara, or the erstwhile kingdom of Baroda is a beautiful city, with properly planned roads and parking lanes. Another example of the visionary administration carried out in Gujarat becomes visible from the numerous CNG filling stations on rodsides. All the autorikshwas ply on CNG here. Least pollution and most efficiency is thus achieved. 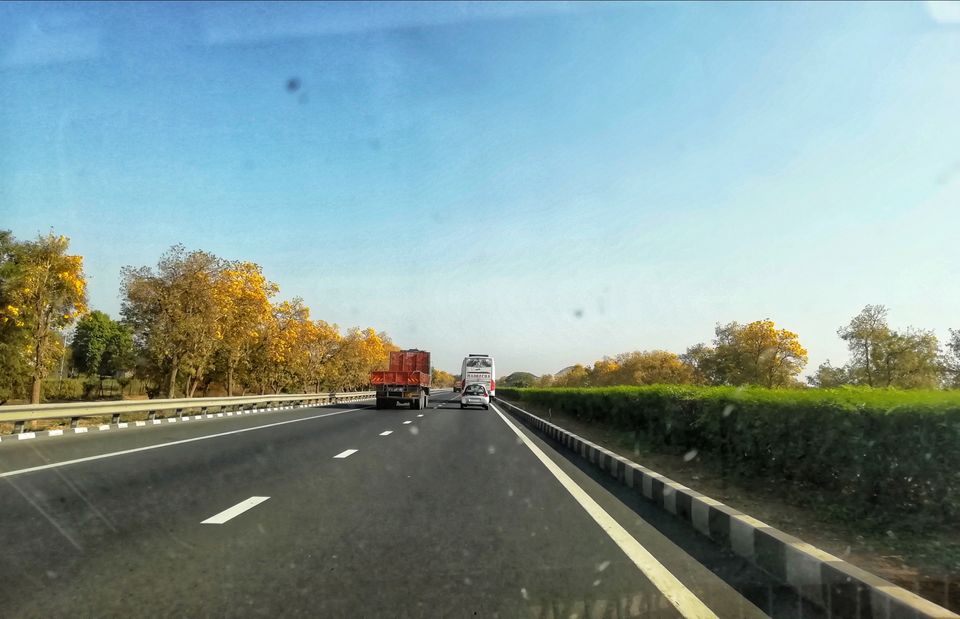 The statue of unity has never been in my list, because its pictures everywhere have killed my imagination. But, the grand statue proved me wrong and is worth a visit. The road, as is everywhere in Gujarat, is awesomely maintained and journey from Vadodara to the Statue of unity is very comfortable and takes less than 1.5 hours. The vehicles can be parked 3km away from the statue and the air-conditioned shuttling buses charge you Rs25 for the entire trip. The entry ticket costs Rs125 and if you wish to use elevator that takes you to the viewpoint inside the statue, it costs Rs350 . Since the construction is only half finished, the surrounding dam offered no scenic beauty and hence I skipped going the top of the statue. The surroundings have been developed as a tourist spot with amenities of international standards.

Statue of unity is so gigantic a creation! 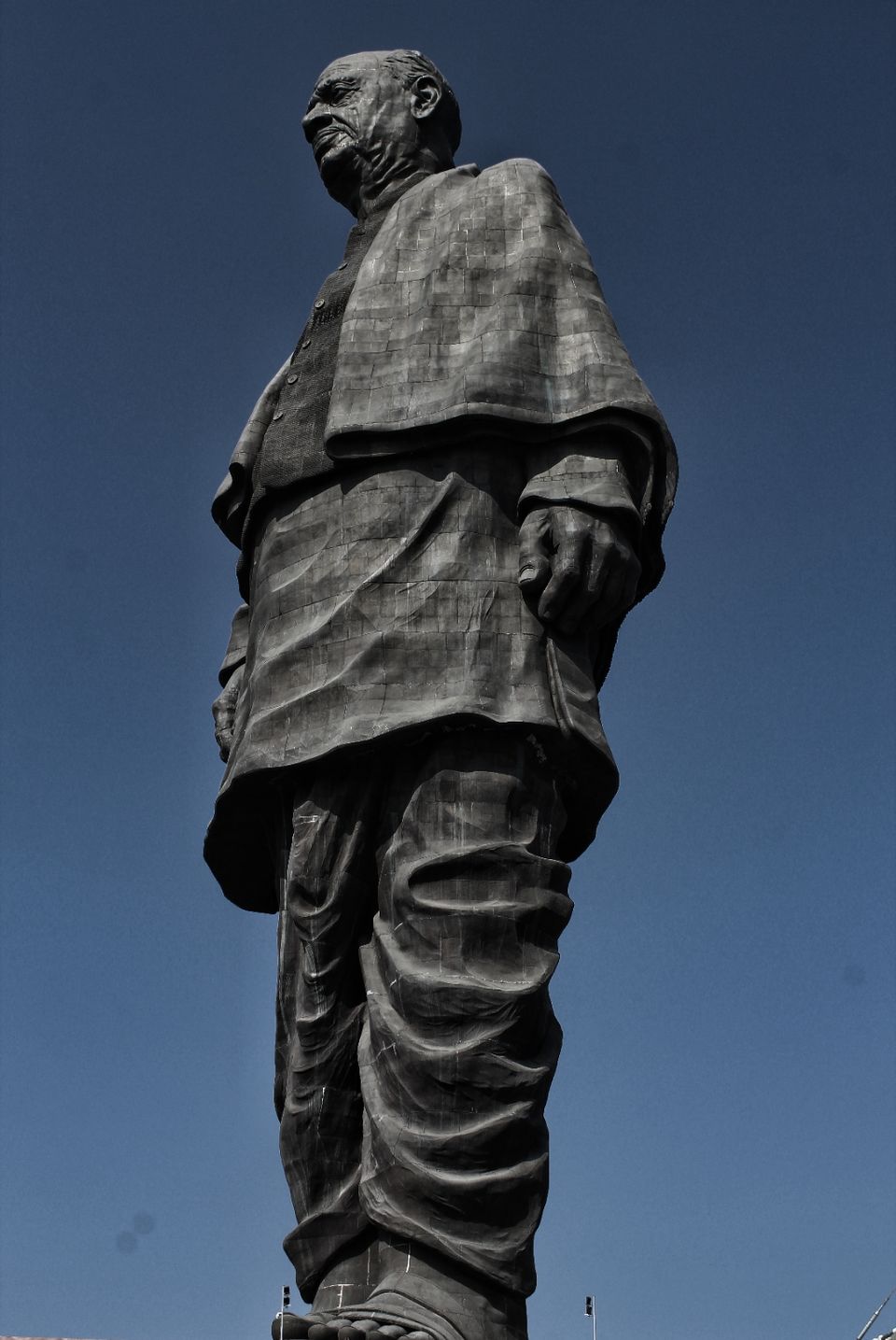 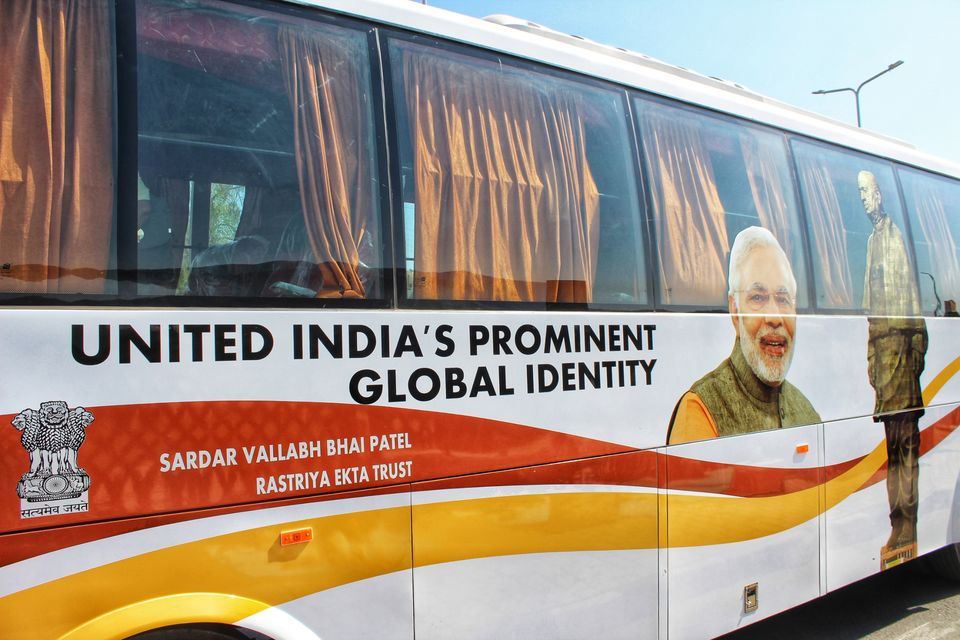 The tallest in the world! 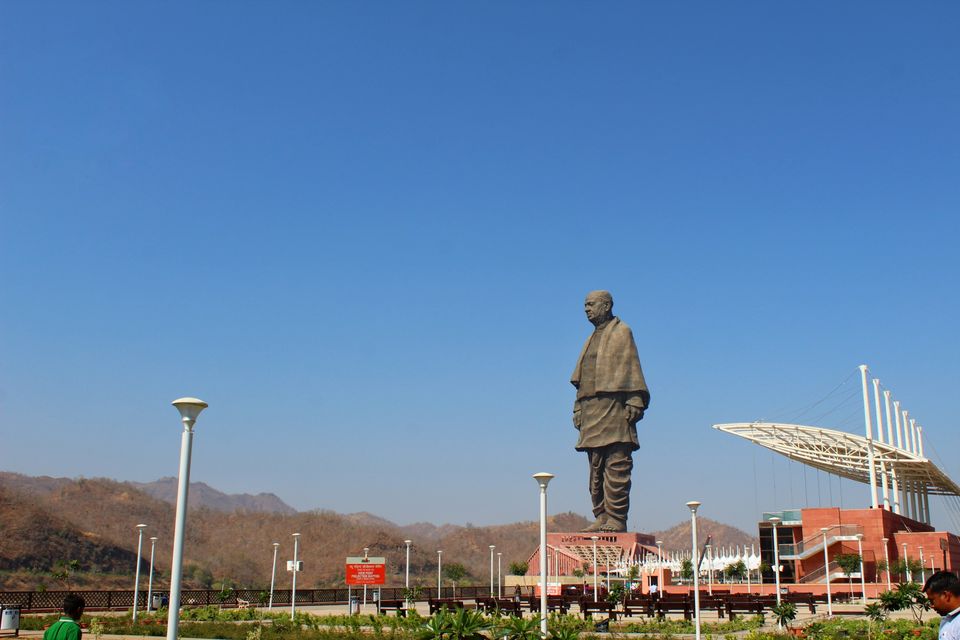 The Lakshmi vilas palace is the abode of the royal family of Baroda and is now a tourist destination. But the entry ticket costs you a whopping Rs200.

The Baroda art museum hosts many original works of the greatest painter shri Raja Ravivarma. The real life portraits makes you no less than awestruck.

Dwarka is on the southern side of Gulf of Kutch and is a very dry area. Home to the legends of Lord Krishna, the Dwarka temple is one of the four Chardhams of Hindu beliefs. But apart from the temple, the region is far from being developed. The locals told that it's been years since it got a decent rainfall. Even the fruits of development that blessed the towns of Gujarat has still not reached here.

But the locals are in hope because they say extensive canals built by the state government has reached till the arid desert of Kutch. So they assume, Dwarka will be followed next. 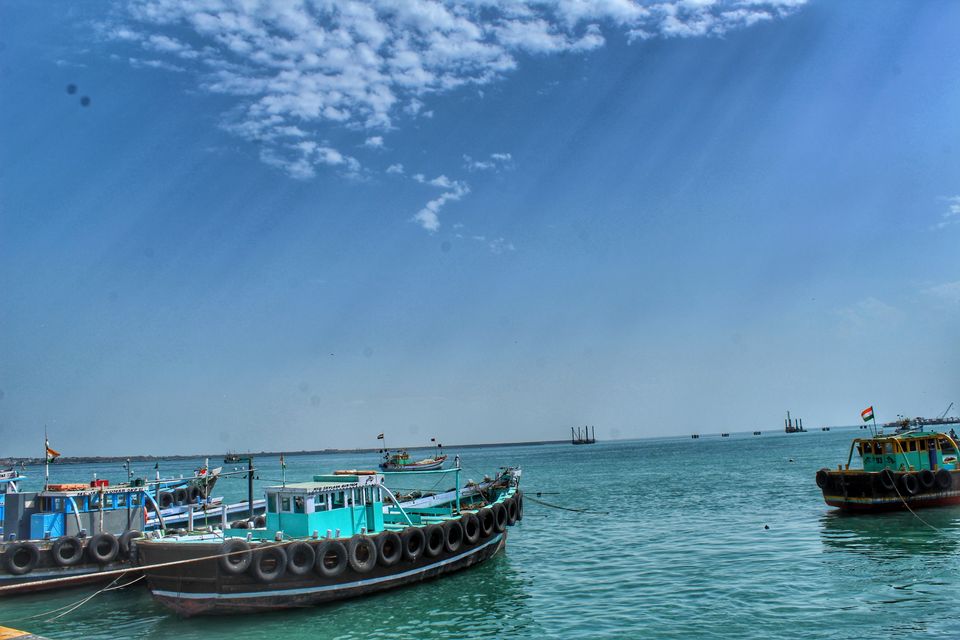 The Dwarkadish temple at Dwarka! (source:google) 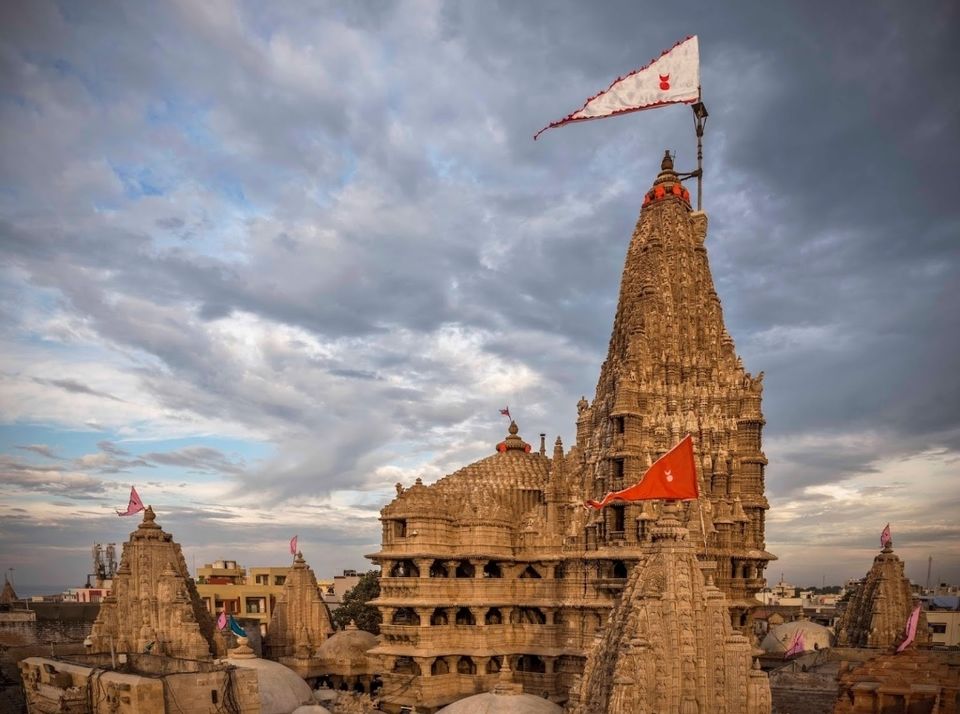 Legend has it the Somnath temple had idol suspended in mid air, with the same principle of magnetic levitation. It also had gemstones fixed in different places of the sanctum that kept the place lustrous all the time. But the temple was ruined amd plundered by Islamic invaders a record 17 times. However, each time the temple was rebuilt with greater glory, and the present day temple was reconstructed at the initiatives of Sardar Vallabhai Patel, and the resurrected temple stands high on the west coast of India, facing the Arabian sea. 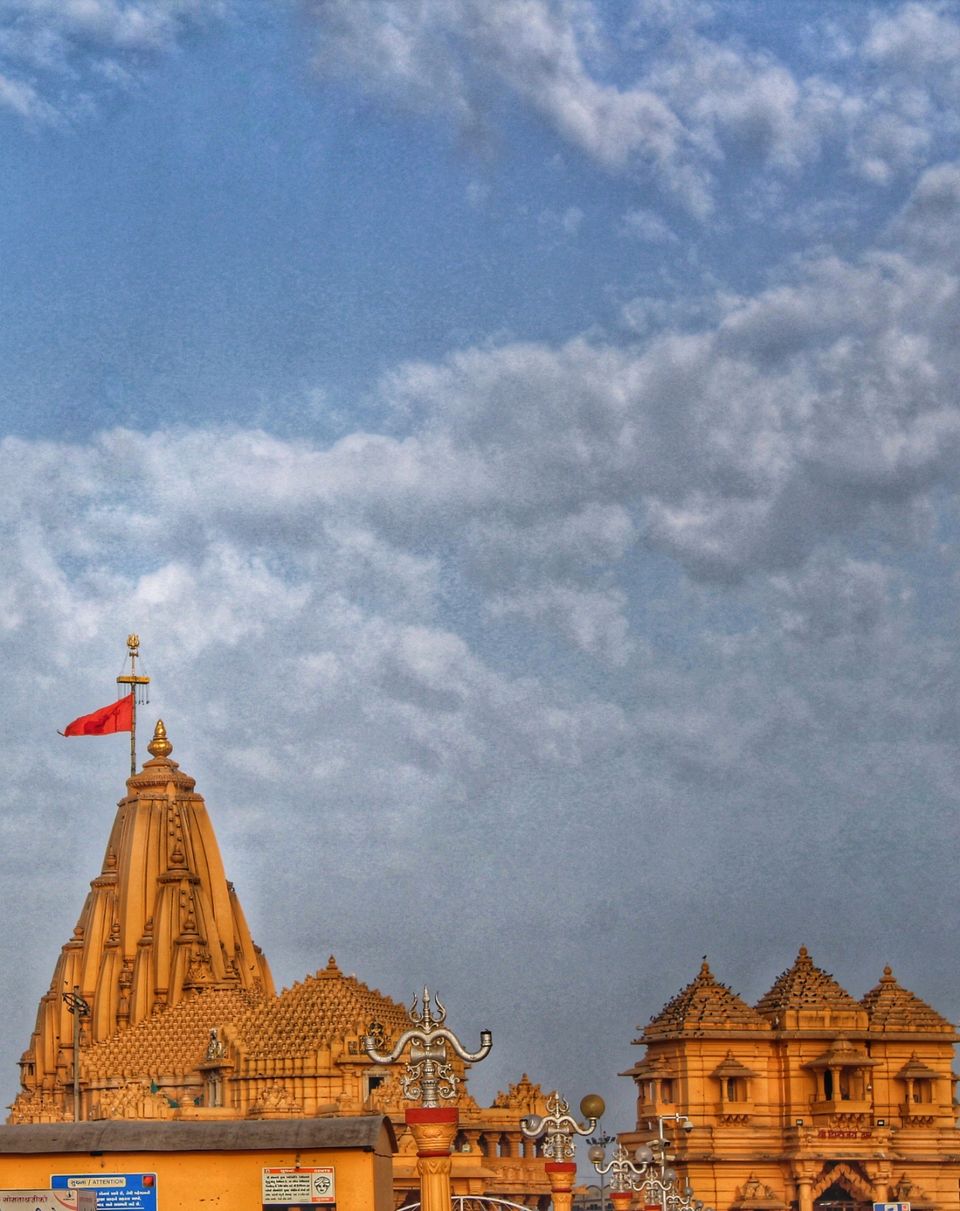 Gandhinagar was made the state capital in 1970. The National Highway 147 passing through the state capital is so grandesque with well planned parallel roads and signals that it resembles the highways in national capital. The Akshardham temple is located in Gandhinagar which, though smaller than the one in New Delhi, is a place worth spending time for. Due to the terrorist attack happened here in 2002 that killed around 30 people, the security here is very tight and so you can see people enjoying the views with no camera lenses and mobile phones.

Stepwells were extensively built in western India to store water. These step wells stored water upto 5 stories and show the efficient planning the administrators in the past possessed. The architecture styles also make these step wells a must visit destination. The nearest step well to Ahmedabad is Adalaj stepwell which is every photographer's delight! 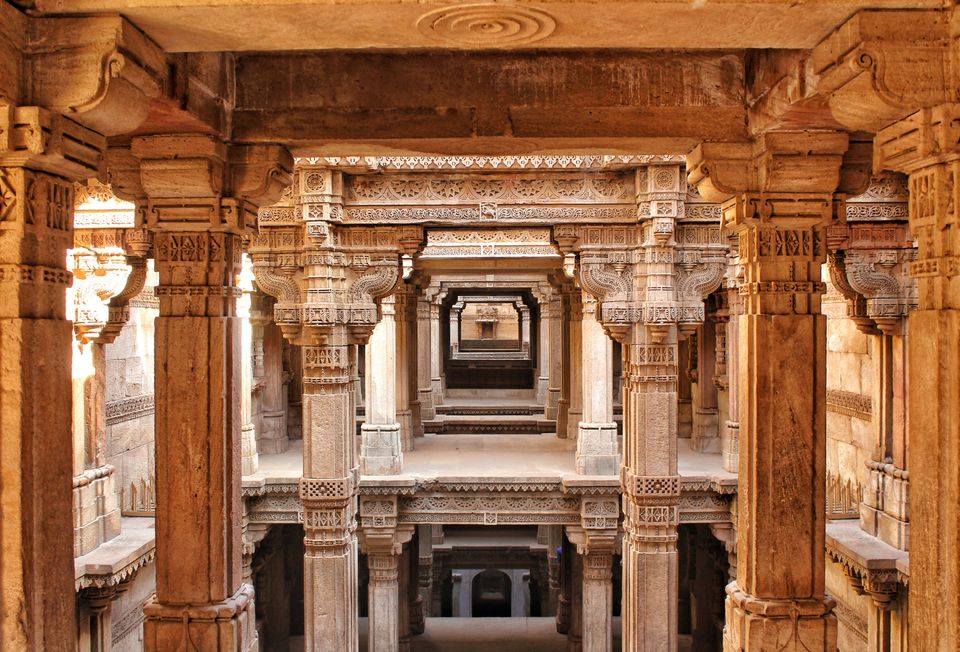 Every part of the well has intricate designs! 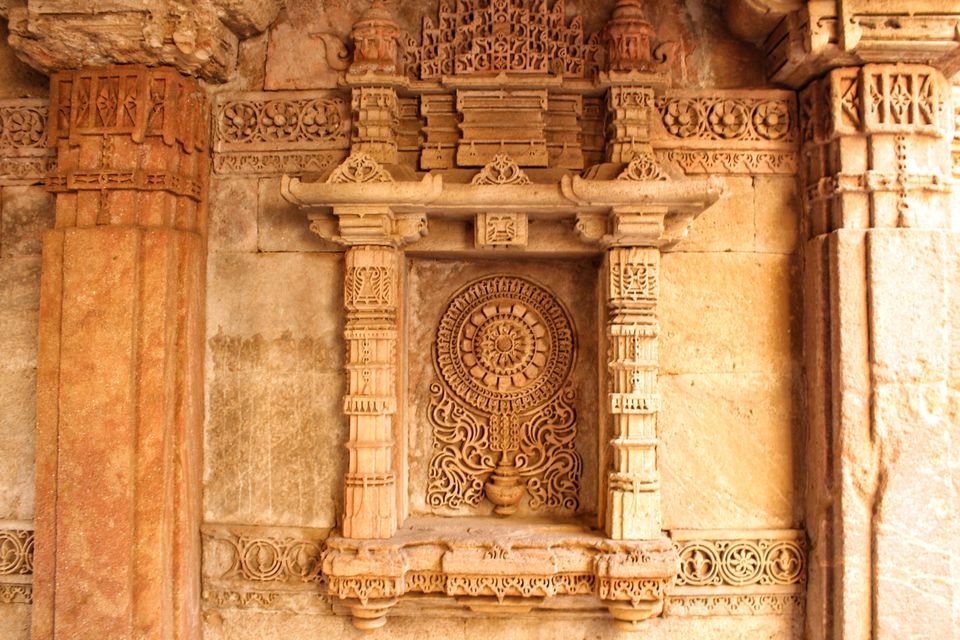 The abode of the 'Mahatma'. It was here Gandhi built his ashram on the banks of the Sabarmati river. It was a self sustainable society where human beings, of all caste, creed and religion lived together. It was here the ideas that struck the mighty British empire, like the Dandi march, was born.

The kitchen and rooms of the original ashram is preserved for generations to visit. The letters and photographs of Gandhi, in original, are also preserved here to throw light on the life of Mahatma. It is necessary because as Albert Einstein told about Gandhi, "Generations to come, it may well be, will scarce believe that such a man as this one ever in flesh and blood walked upon this Earth!"

A view to the past...a snap imside the Sabarmati ashram 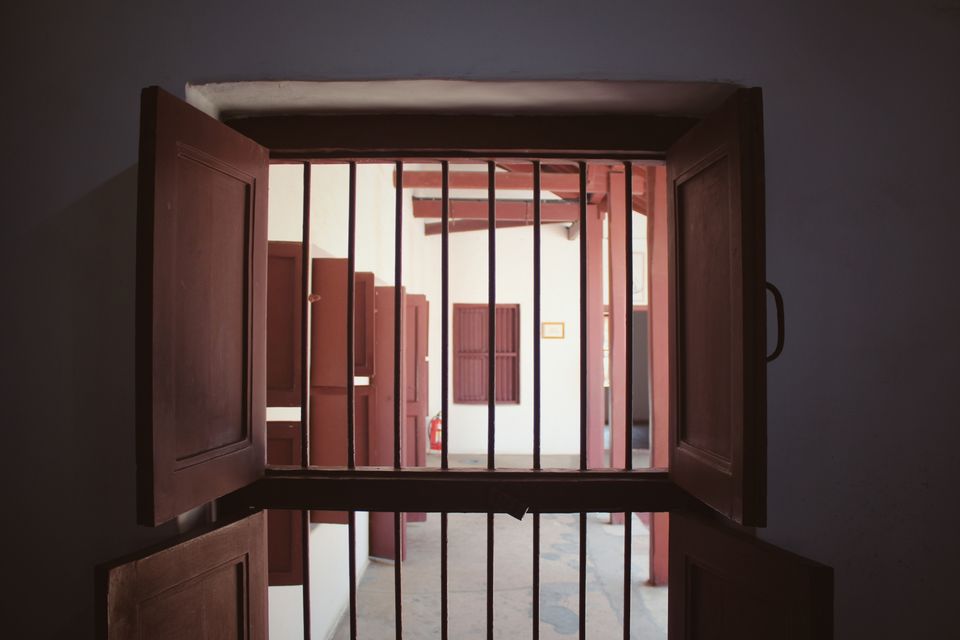 The greatest message ever! 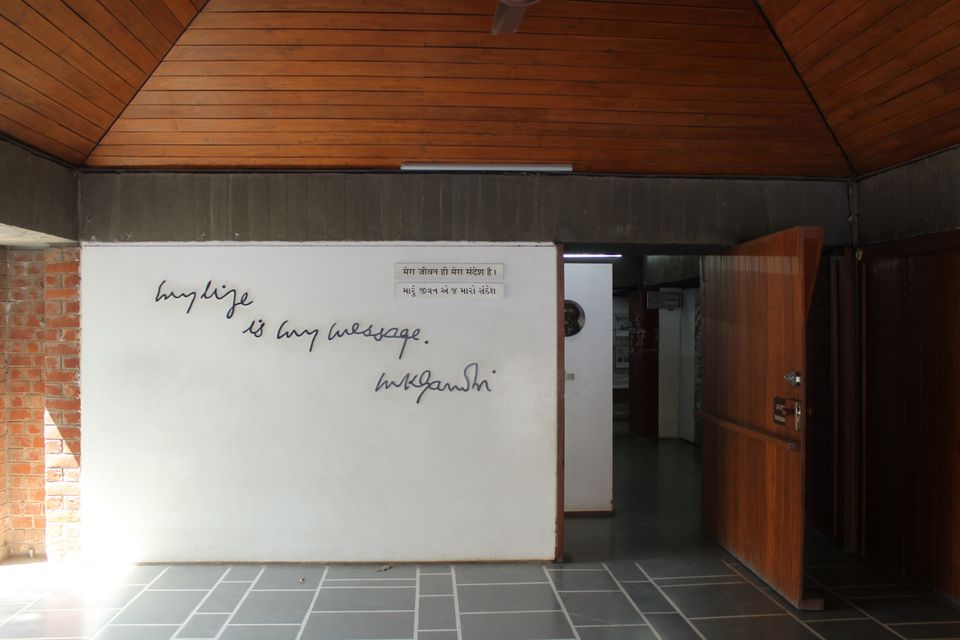 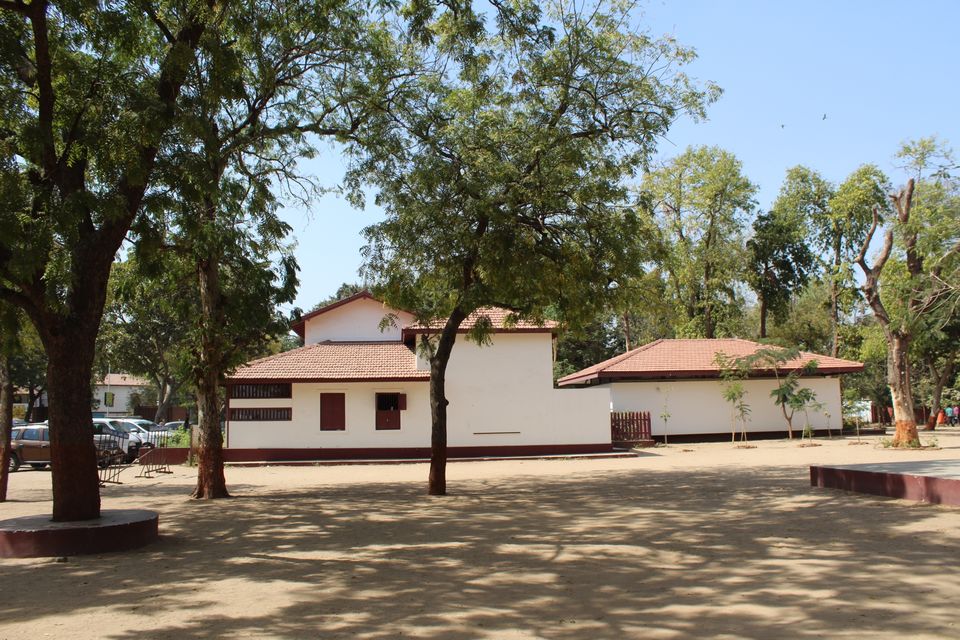 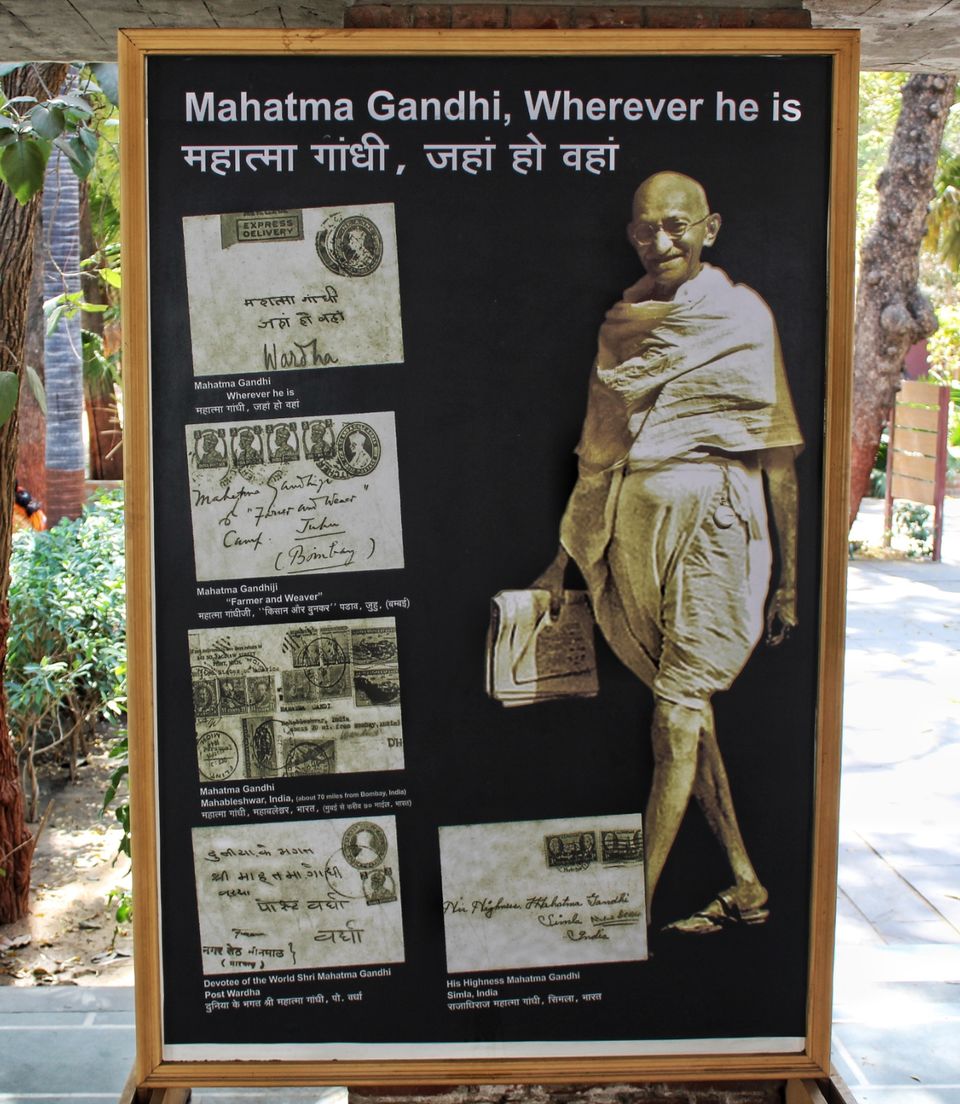 The Sabarmati river in Ahmedabad has been cleaned and developed for a length of 8km, told me the cab driver. The riverside has a walkway developed along its sides and clean highways beyond. When I enquired the locals about the so much talked about 'Gujarat model' of development, people were unanimously supporting it. They have uninterrupted power supply and the best of highways. Industries and investment have been on the rise and so the case with employment. It is a people fed up of natural and human made calamities. The Gujaratis are hard working people and I found more female participation in the mainstream. Though crippled by lack of rains, earthquakes and poverty in distant hamlets, hope is there that the trumpet of development will soon blow over there too.

The Sabarmati riverfront at night 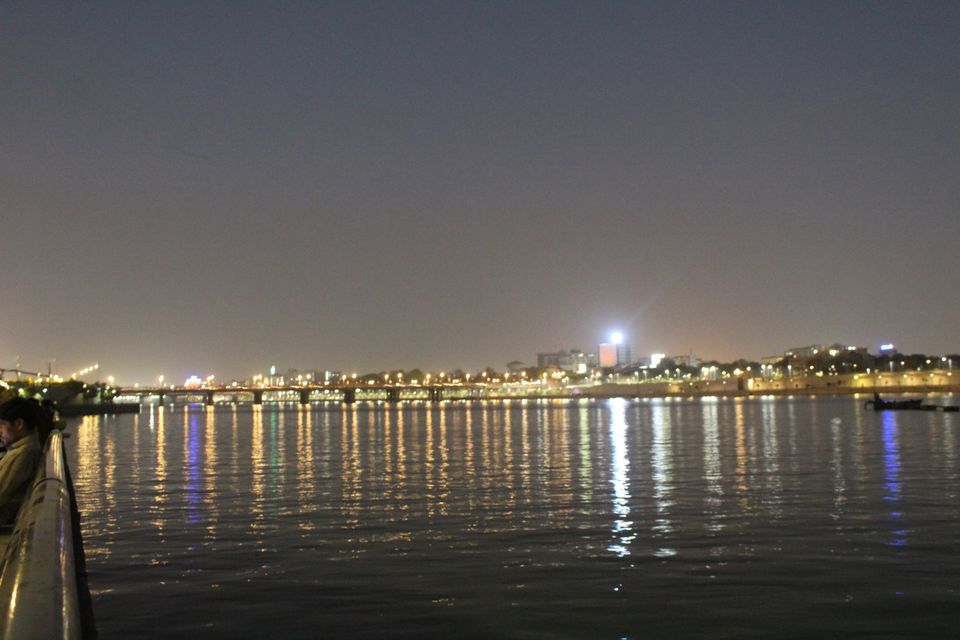 Known as the 'Manchester of India', Ahmedabad has the markets that make you spoilt for choices. Head to Lal darwaza market and Dhalgarwad for purchasing textiles and jewellery.

Recalling words of Amitabh Bachan in an advertisement "Kutch nahi dekha tho kuch nahi dekha" , I desperately wound up my trip without visiting Kutch. To all those planning a visit to Gujarat, plan the visit in winter months because you can add Rann of Kutch to your itinerary. Another destination any wildlife enthusiast can add is the Gir forest.

Early morning, after having a plate of fafda and the sweetest jalebis for breakfast, I headed to airport to fly to Mumbai. And then the thought struck me, perhaps, on my next visit, I might be able to book tickets to Mumbai on a bullet train, who knows! 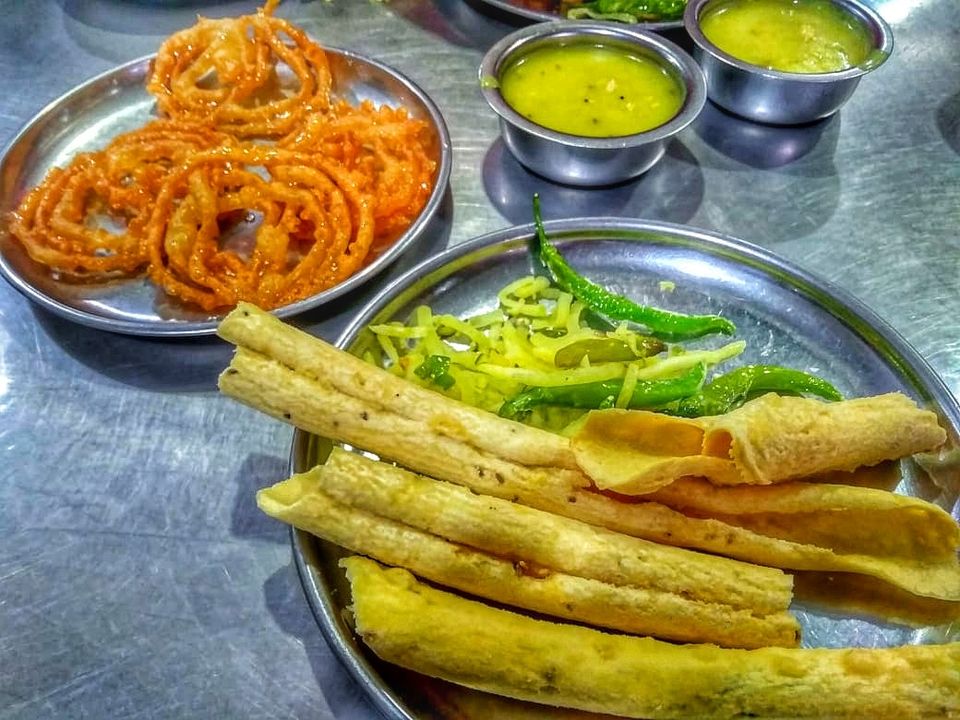