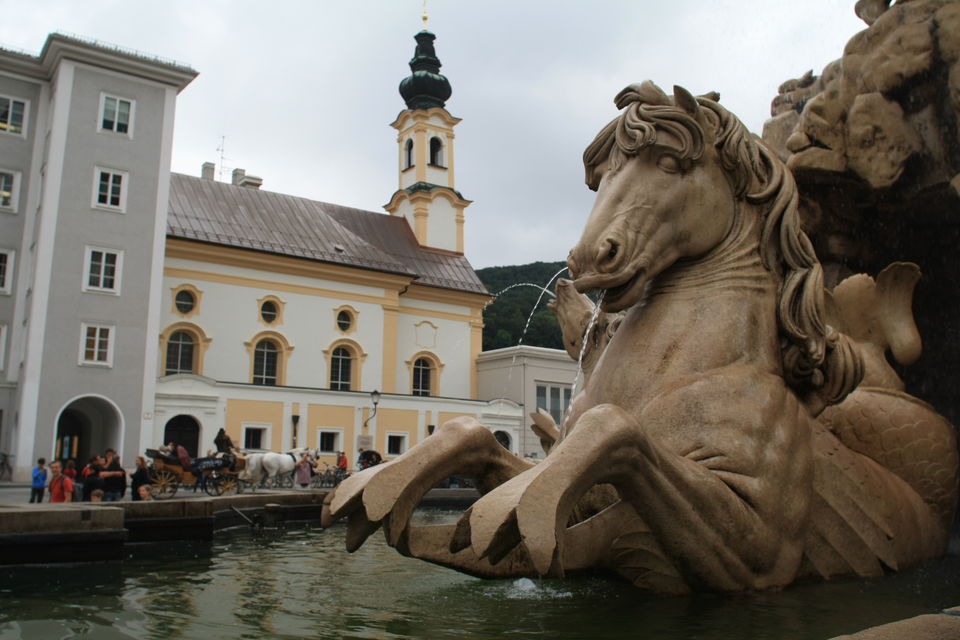 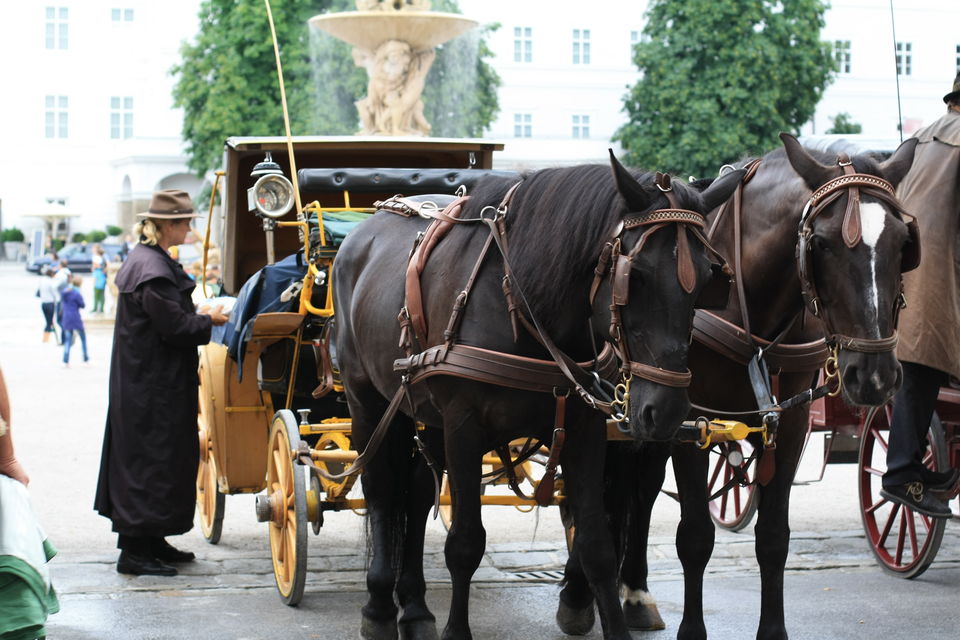 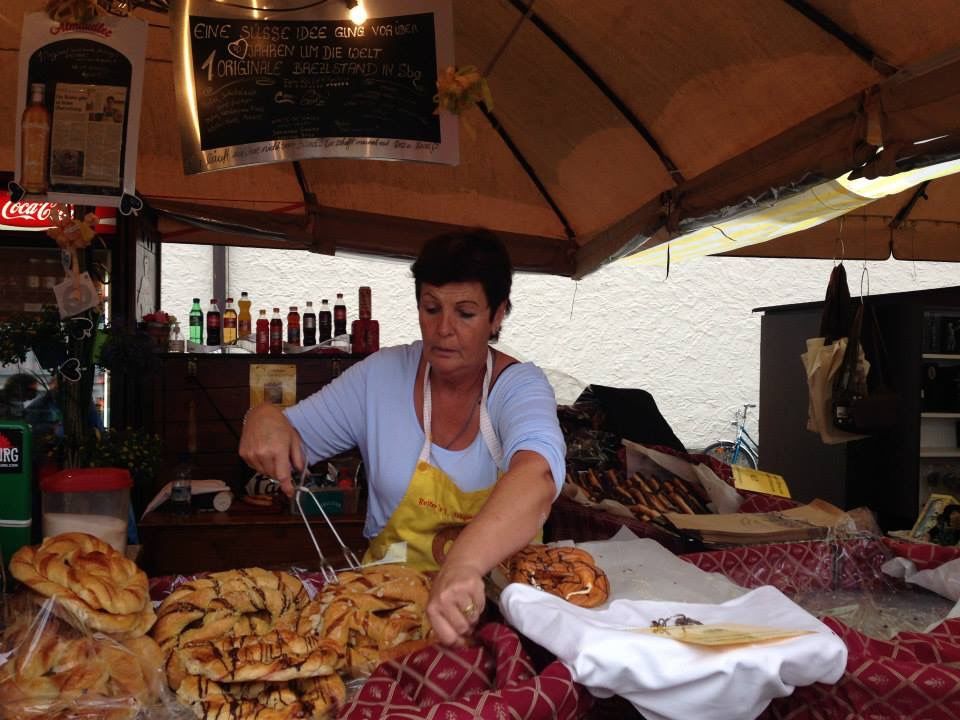 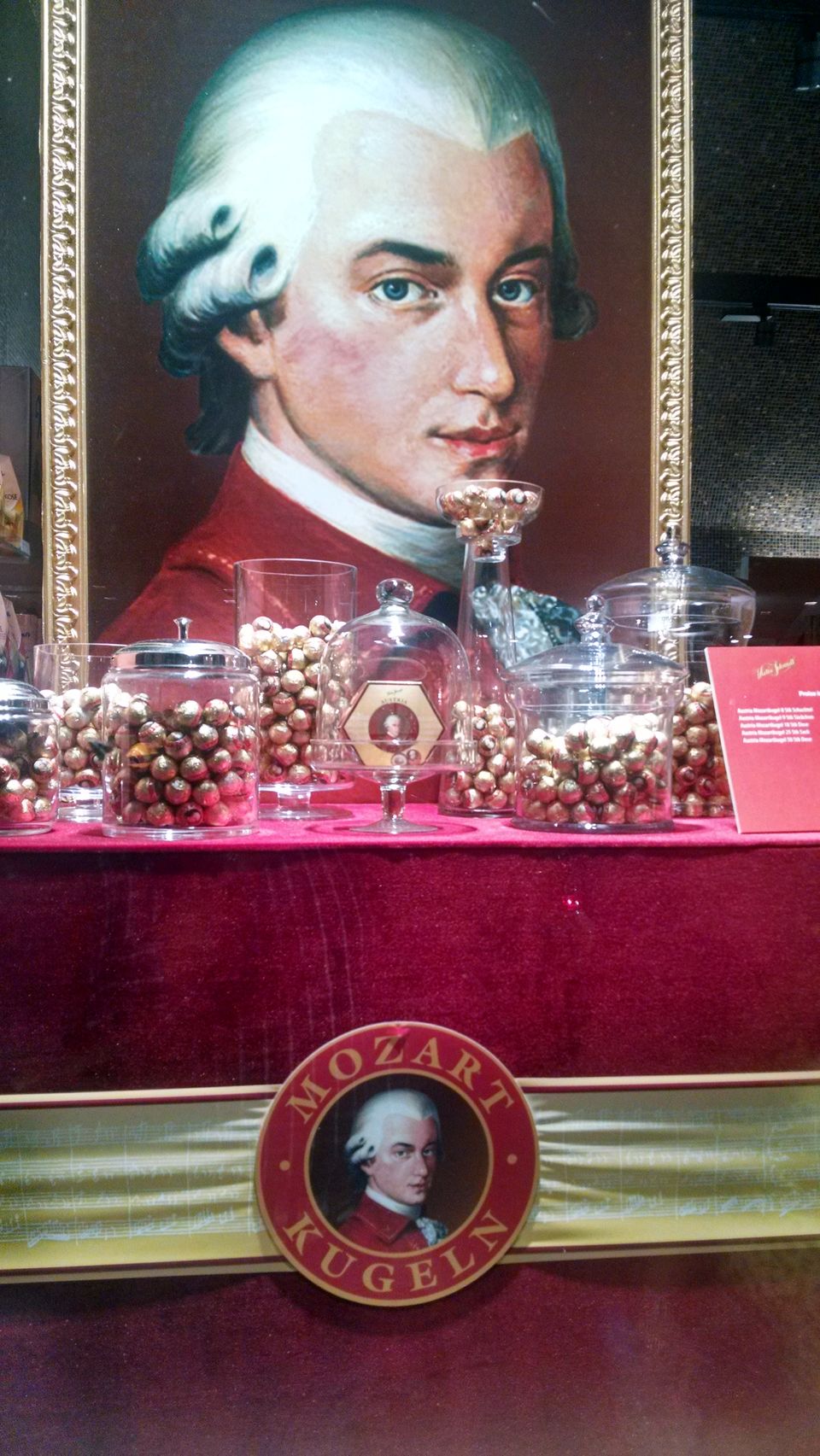 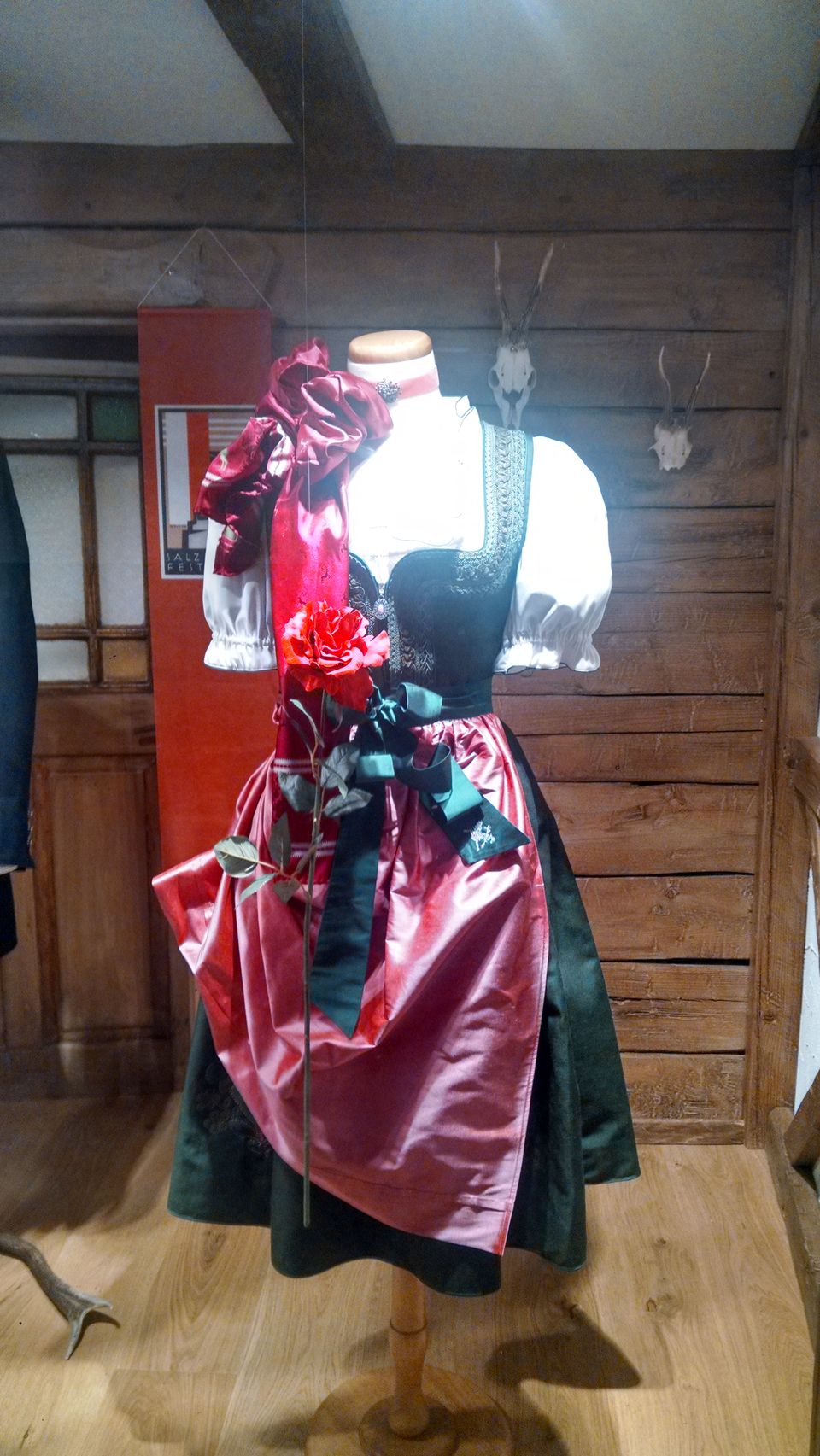 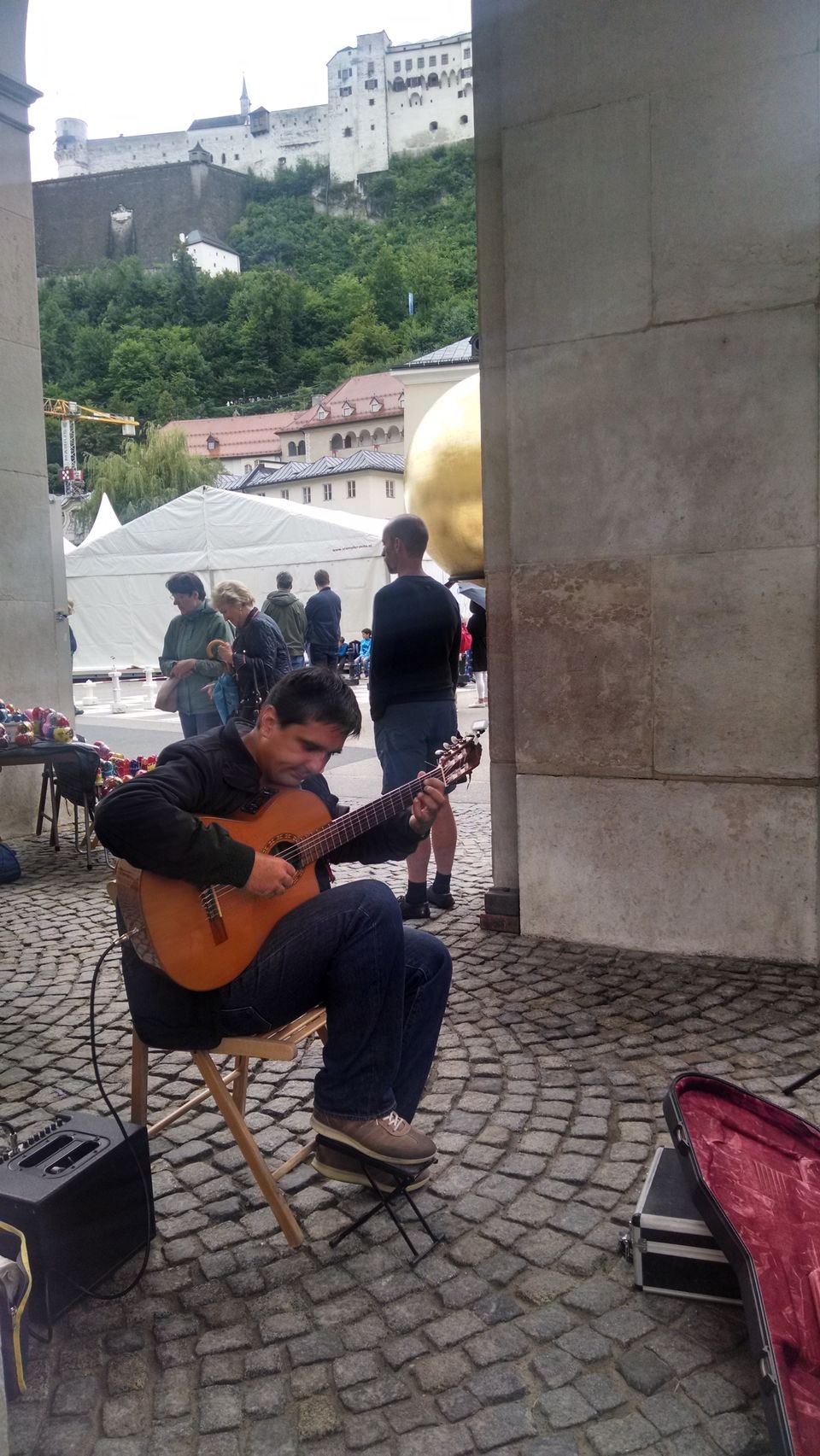 'Hohensalzburg Castle’ situated atop a hill 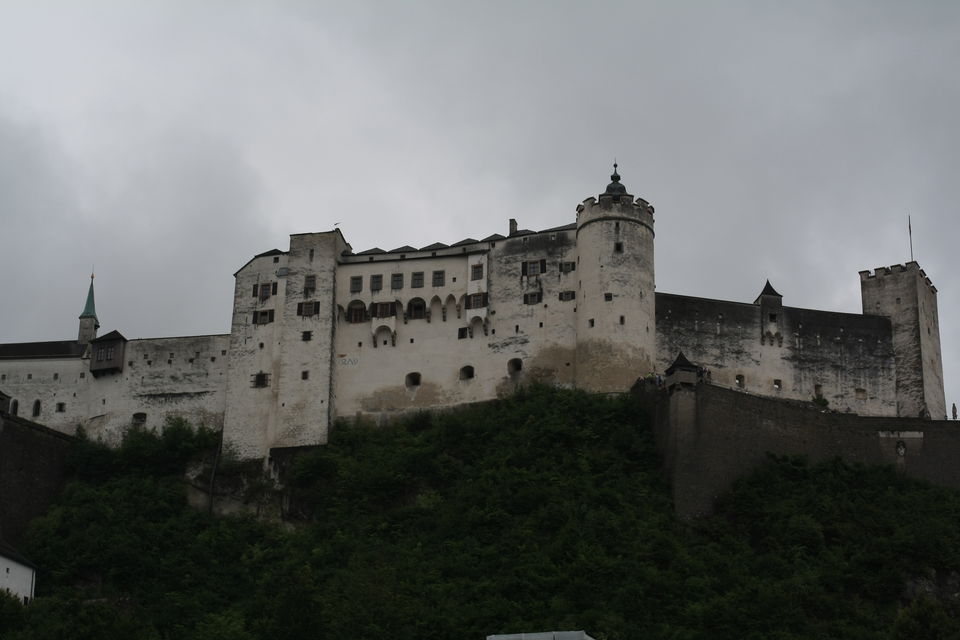 Town view from the Castle 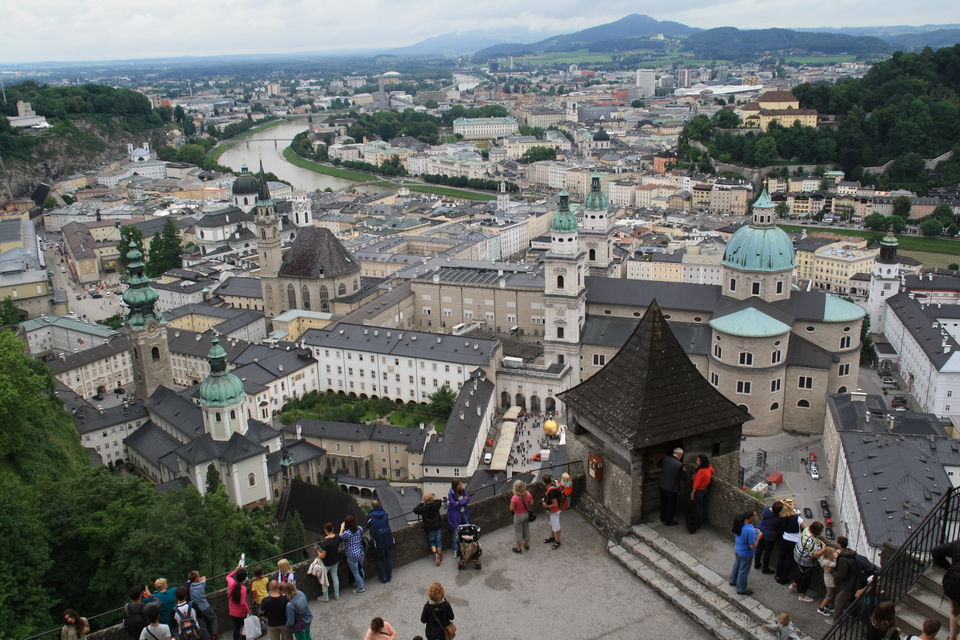 View of domes with baroque architecture 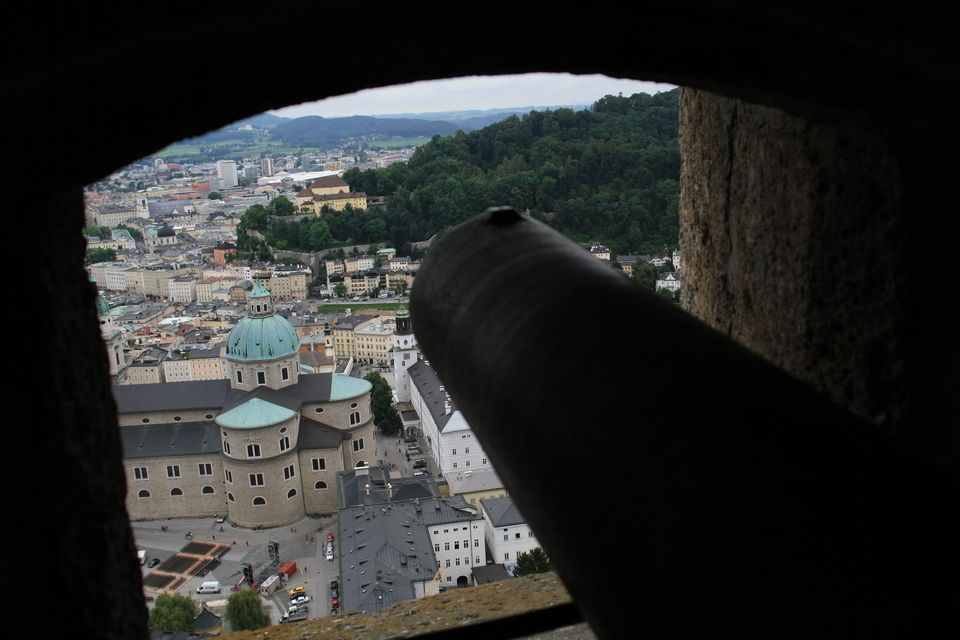 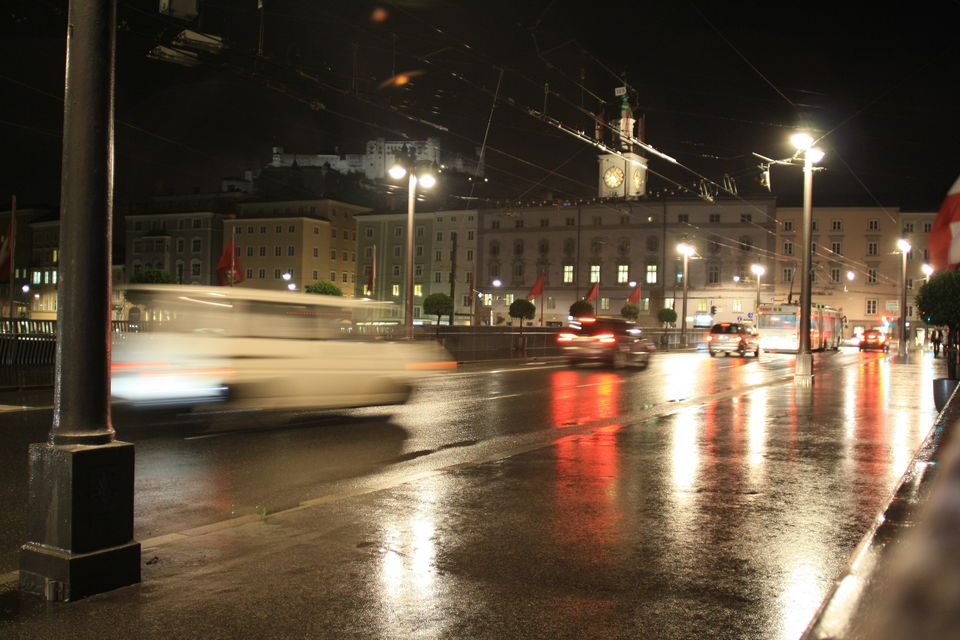 Majestic and well-lit Castle in the background 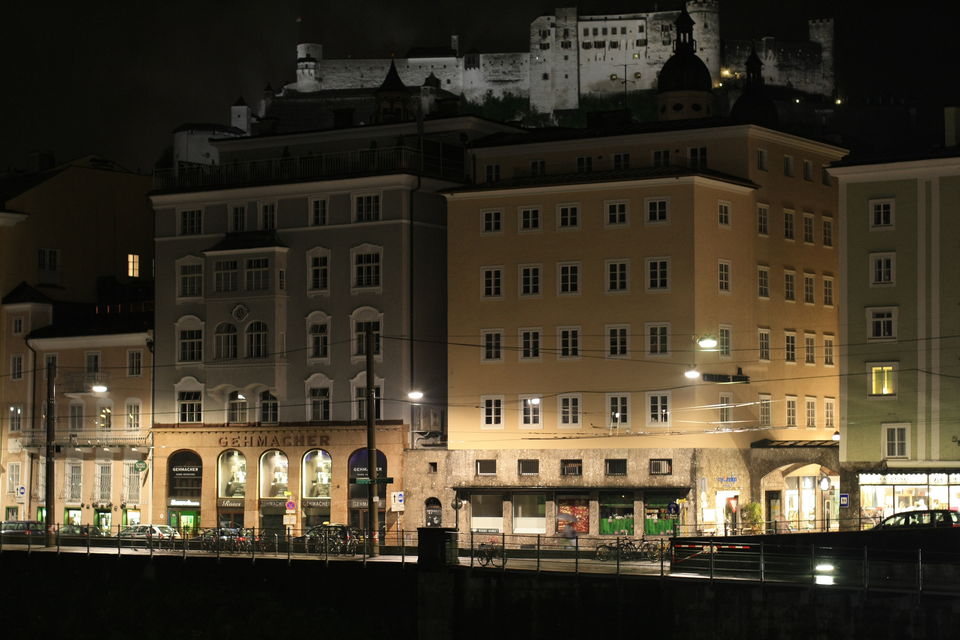 Walk by the river 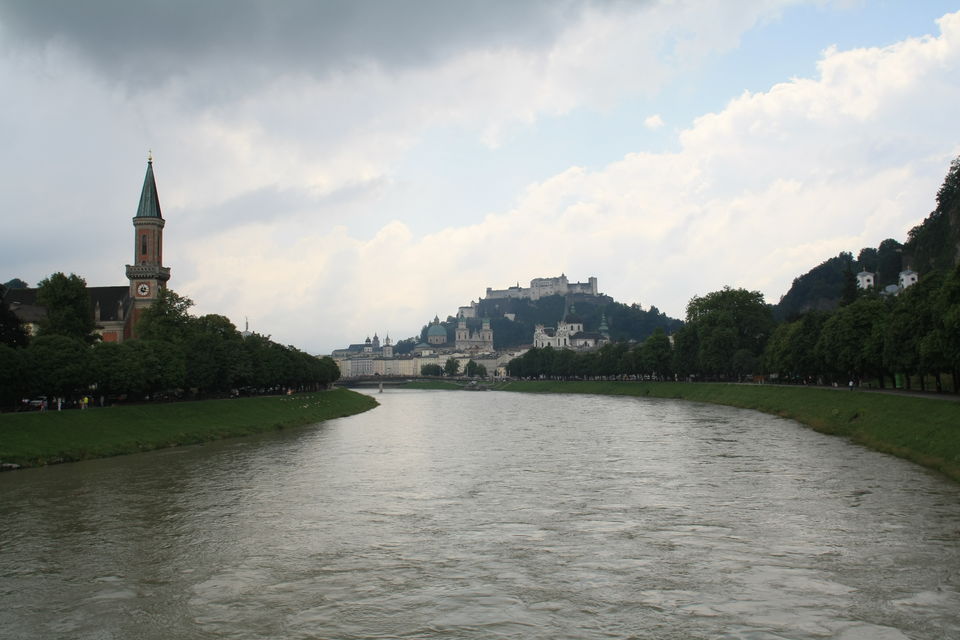 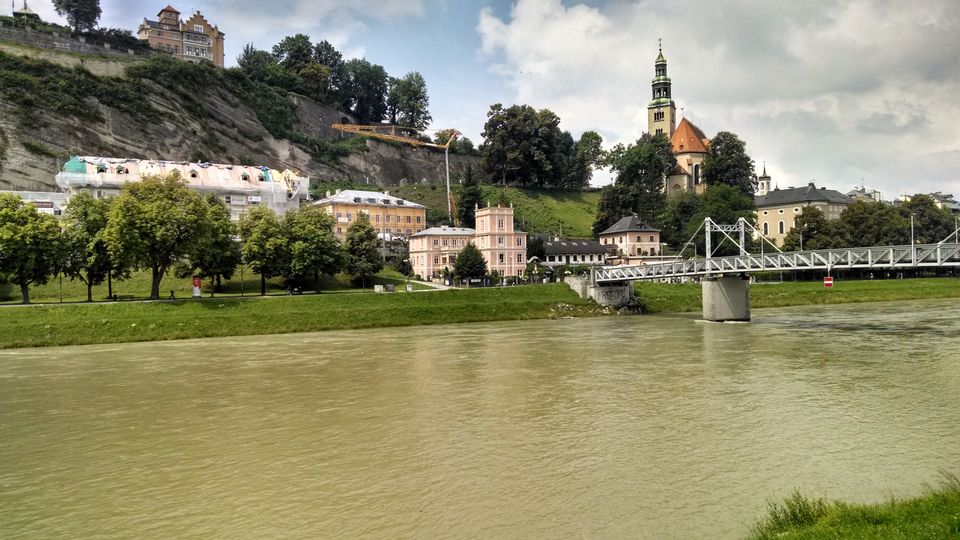 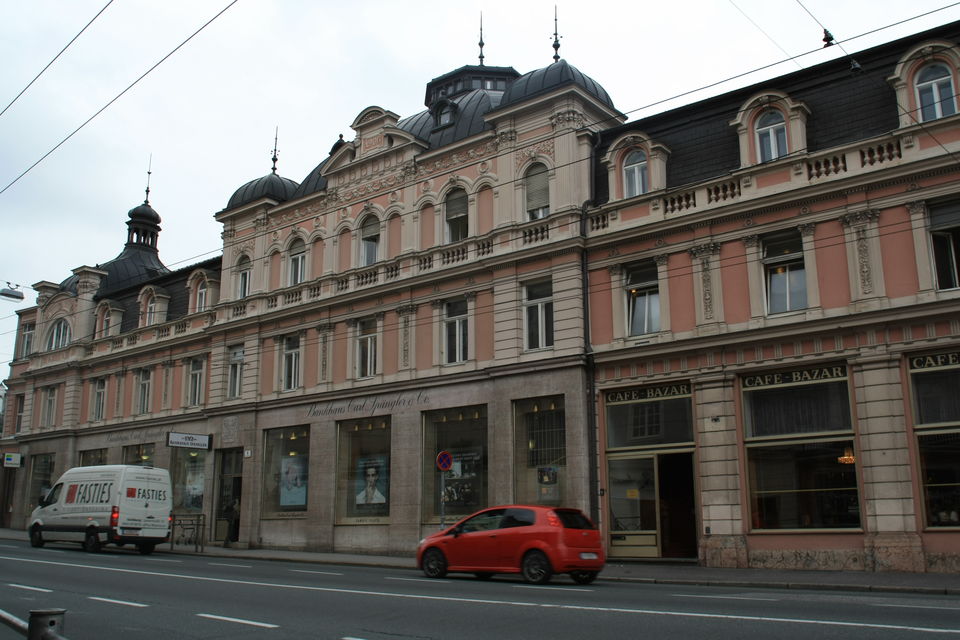 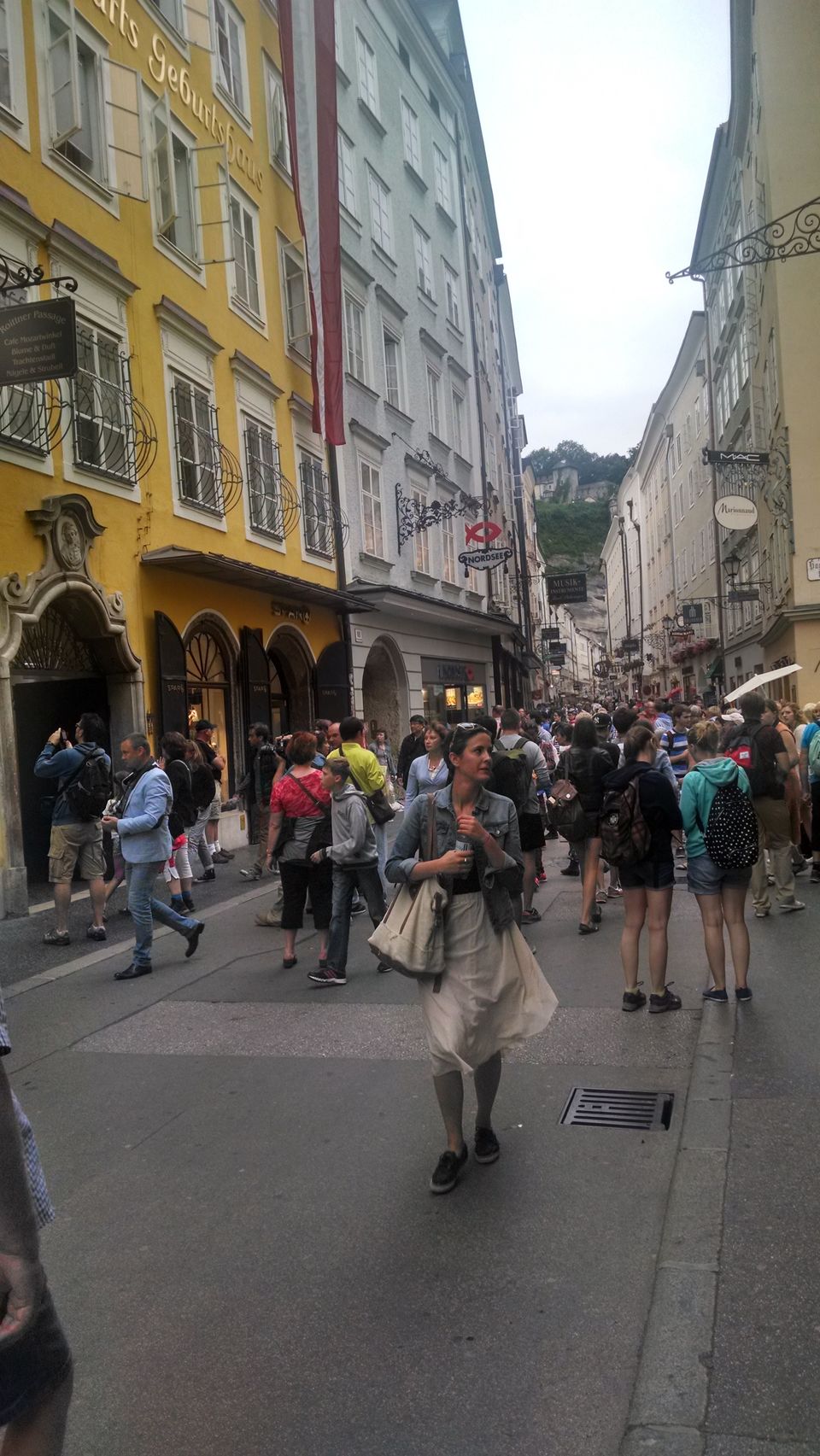 Clear sky after 2 days of rain 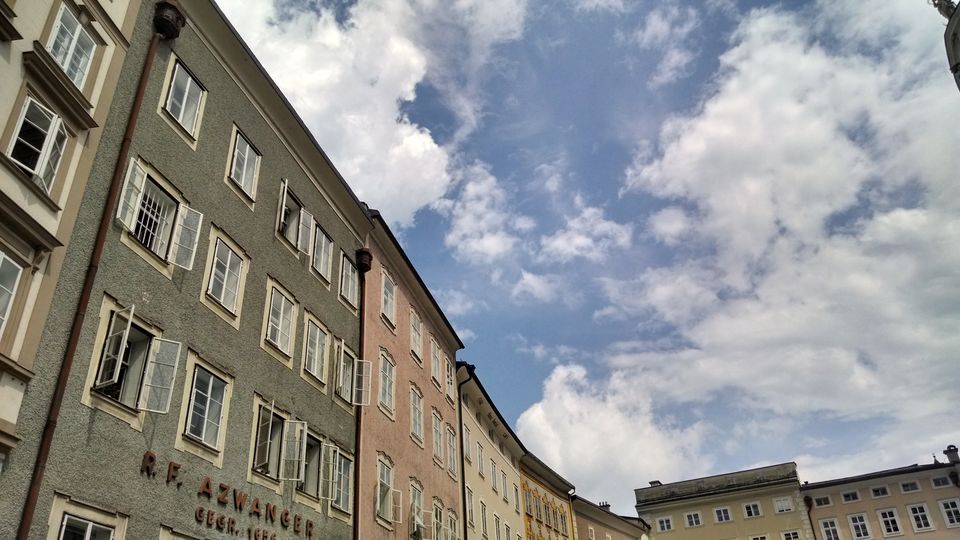 I peeped out of the window of my hotel room in Salzburg, Austria. Situated in the city centre, the hotel overlooked a busy street bustling with Bavarian pubs, open-air restaurants and apartments painted in coral pinks, cream yellows, light greys and earthy browns. Salzburg, popular as the birthplace of Mozart and venue for the famous movie ‘The Sound of Music’, has been designated as a world cultural heritage site owing to its old and well-preserved medieval charm. The alluring townscape is marked by monuments in baroque architecture in the backdrop of the Alps with river Salzach flowing through the city centre.

I dumped my luggage and headed straight to the ‘Old Town’, the small historic city center full of monuments dating from the Middle Ages to the 20th century. The area is also a shopping mecca with its narrow lanes housing fashion labels like H&M, Prada and Hermes besides small souvenir shops selling miniature liquor bottles (especially peach schnapps), cowbells and ‘Mozartkugels’ (small round confection made of dark chocolate). I walked around the cobblestone streets, glancing at mannequins adorned with Bavarian dresses and stopped by a flea market to try some olive bread, ‘marzipan’ and cheese. Next to the stalls, lay a huge chess board where oldies played while others watched over. In the backyard, a huge stage was being set for the evening music concert. A musician played guitar at a street junction while an artist displayed an exhibition of his oil paintings for sale.

As the evening dawned, it became cold and windy. A drizzle had started. I stood on the bridge crossing the Salzach River. The wet lanes glistened with the reflection of street lights as the spookily lit ‘Hohensalzburg Castle’ stood majestic in the background. Couples shrouded in jackets and huddled under umbrellas passed by.

“Wow, what a summer,” I said to myself. All I needed in this weather was simmering hot Indian food and was delighted to find an authentic Indian restaurant in the Old Town.

The next morning was partly cloudy. I started my sightseeing tour with a visit to Mozart residence situated on the way to Old Town. In 1773, after the house in which Mozart was born became too small, the entire Mozart family moved across the river to a new building which is now known as ‘Mozart Wohnhaus’ (or Mozart residence.) This building accommodates a museum where visitors can go through Mozart’s life, work and family with the help of an audio commentary.

After spending an hour there, I visited ‘Hohensalzburg Castle’ a fortress situated atop 'Festungsberg', a small hill in Salzburg. A modern funicular railway leads up from the town to the castle, which is one of the largest medieval castles in Europe. After taking a self-guided tour, I reached the rooftop which offered spectacular 360 degree views of the townscape including the Alps, monuments with bluish-green domes and river Salzach. The castle also houses a museum and a music concert venue at the top.

It was afternoon and I headed to Old Town for lunch. It was raining heavily and I took shelter under an open-air Italian restaurant covered with thick plastic sheets. I watched the rainwater decant from the edges of the plastic sheets while relishing the hot minestrone soup and risotto followed by a delectable tiramisu and ‘caffe.’ A trip to Salzburg is incomplete without shopping for savouries. I headed to ‘Manner’, a popular shop situated in the heart of Old Town known as the ‘go-to-place’ for satisfying your sweet cravings. While I was glancing through the myriad options of flavoured wafers, assorted chocolates, cookies and liqueurs at the shop racks, an old Austrian lady came up to me.

“Be careful with what you pick,” she grinned.

I stared at her with a blank expression trying to manage the packets in my hand.

“Haha, since you will never be able to stop at just one,” she added.

I bemused with her quirky gesture, nevertheless kept stuffing my shopping basket with the goodies.

Finally the sun was shining after two days of rain and I decided to spend the day taking a walk by the river. On the way, I met a guy from Hungary who helped me with the directions. He was short and stout, his face round with missing teeth.

“Oh, you must check out the Mirabell Palace and gardens, Mozart’s birthplace, the salt mines and…,” he went on with his list.

It was my last day here. I had seen, felt and absorbed so much over the last three days. Yet there was so much more to discover - for the old world charm of this picturesque town grows and encapsulates you in its alluring music, beauty and culture.