Vi-en-na. The word slowly rolled off my tongue as we moved closer to our destination. I love how the word ‘Vienna’ sounds, the pleasure it gives your ears when the words first hit you, and how it envelopes a world of imagination within itself. The Austrian capital plays all at once many roles – from modern buildings that stand out in the evening sky to the many architectural wonders of the historic sites; from expensive high-street shopper`s paradise to the home of flea and antique markets; from dapper-dressed men and women to colourful street artists; from being home to Mozart to being a muse for aspiring students. Vienna encompasses all this and more.

My husband and I were driving from southern Germany and the three hour drive to the Austrian capital had me clocking in the kilometres (and arrival time) more than once. The anticipation of arriving into the city reached its peak when we finally hit the main motorway that would lead us into the town.

We spent the first evening going around the city center, trying to absorb the splendor of this culturally rich city. In Vienna, statues are aplenty and they form an intrinsic part of the city's character. Vienna's center is also characterized by cobbled streets and narrow alleys, and luxurious shops and expensive restaurants on the other hand. Outside the Opera House, ticket sellers dressed as Mozart invite you into an evening of the famous Viennese Opera, while horse carriages lure you with a promise of a romantic evening.

Alighting from the city bus outside the Opera House, we entered the world of Viennese charm. One glimpse and I knew 36-hours would be flying away very quickly!

Vienna unfolds like a storybook, each page bringing something new. The more you read, the more you get lost in the world. Vienna does the same to you - enchants you and intrigues you for all at the same time!

Where do you begin to explore a city with splendour like Vienna? The first evening in Vienna and I realized all my planned itineraries were starting to fail me. We decided to take the city bus from our hotel to the city centre and go with the flow. When we alighted in front of the Opera House, we got our answer! The Ringstrasse (or the Ring Road) is a 5.3 kilometres long stretch that traces the path of the Medieval city wall surrounded Vienna until 1860. Emperor Franz Joseph ordered its construction in 1857, replacing the Medieval wall with a grand boulevard – which today boasts of some of the most important sights in Vienna. The Ringstrasse was officially opened in 1865 and celebrates its 150th jubilee this year. If you are the walking kinds, then you can explore the area on foot – pausing in between to admire the grandeur of the buildings that you find along the way. Those who prefer more comfort, the Vienna Ring Tram departs every 30 minutes from Schwedenplatz and goes around the Ringstrasse, offering an interactive system with its audio-visual system. Another way to explore it is through the Hop-on Hop off bus tour. Just perch yourself on the top deck and you would find yourself going around the Ringstrasse. If you go around the Ringstrasse, you will acquaint yourself with almost all the important attractions in the city centre such as the Opera House, the Museum Quartier (housing the Museum of Natural History, the Kunsthistorisches Museum and the Modern Art Museum), Heldenplatz, the Parliament and the City Hall (Rathaus). 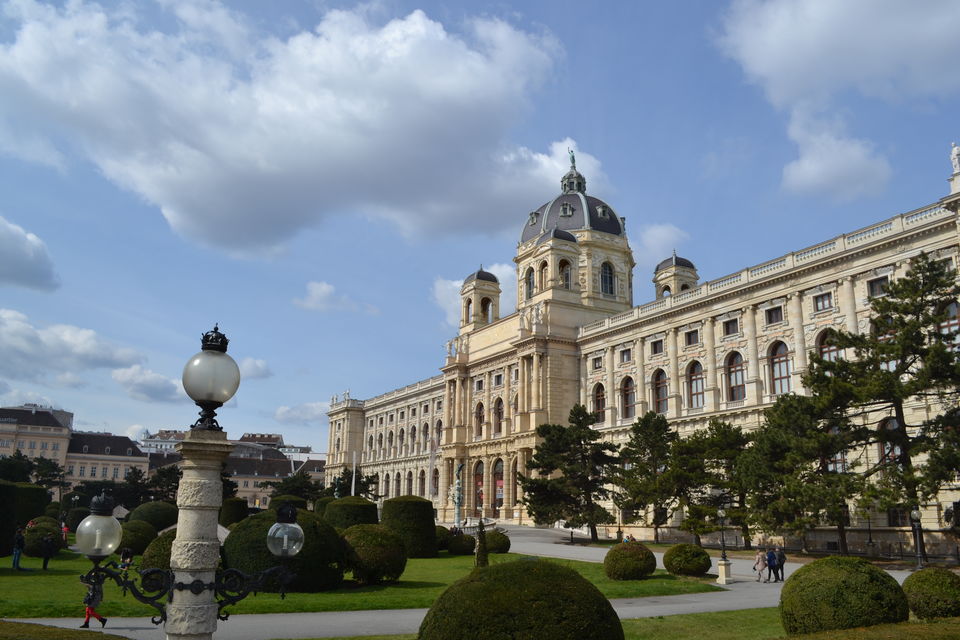 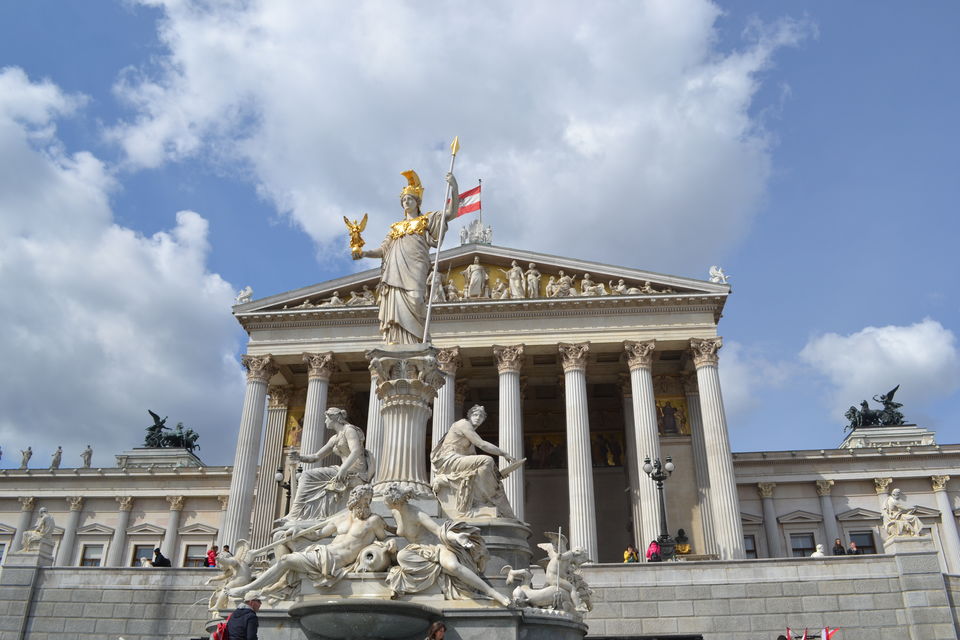 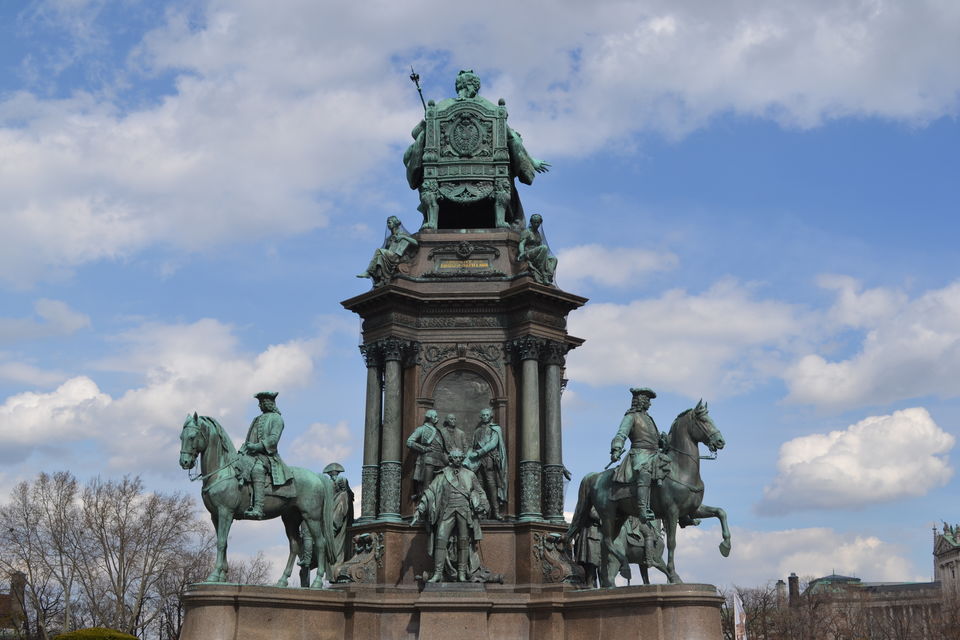 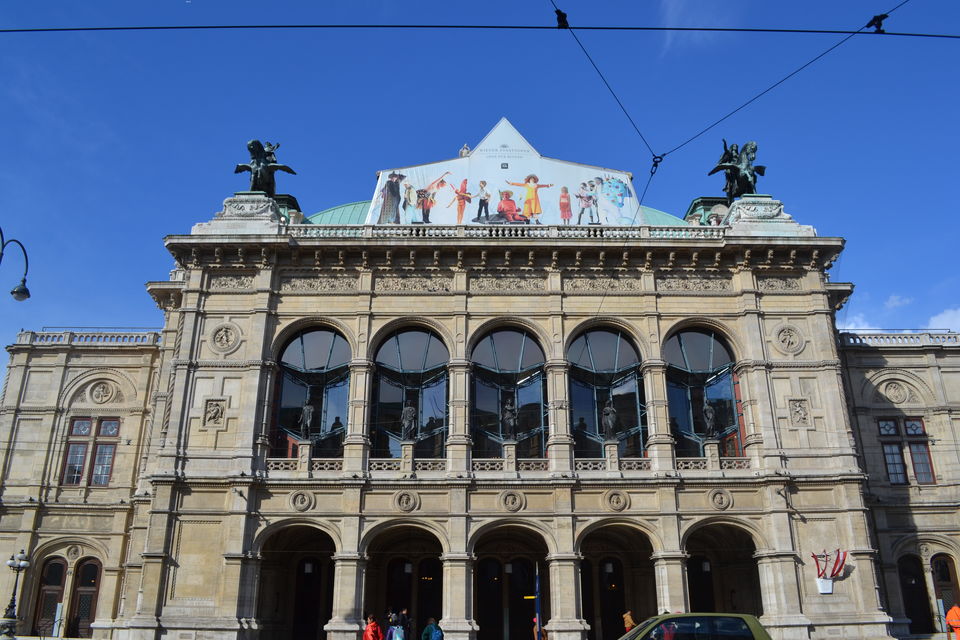 Schönbrunn Palace stands tall in the list of Europe’s opulent palaces. Reminiscent of the Baroque era, the Palace is among the classic “must-sees” for tourists coming to Vienna. So make sure you reach here early if you want to avoid long queues. We took the ‘Grand Tour’, wandering through the 40 rooms of the Palace – each evoking an awed response from both me and my husband. Each room has a distinct character and are intricately done. For instance, there is a ‘Rich Bedroom’ with its rich red velvet hangings and precious embroidery in gold and silver. Or the ‘Millions Room’ that is set apart in its decor showcasing scenes from the life of Mogul rulers in India in the 16th and 17th centuries and features panelling decorated with 60 Rococo cartouches with Indo-Persian miniatures. After the tour of the Palace, we explored the royal gardens. The central axis of the palace formed the backbone of the gardens and each section is meticulously set in accordance with the axes. The vast gardens are really an extension of the ruler’s status, but pity we didn’t get a chance to see the flowers in full bloom as we visited in early spring. What I specially loved about our visit was the Easter market, which I hadn't known about before. There was live music, delicious food stalls and glühwein! Cherry on the top? An unexpected snowfall!! 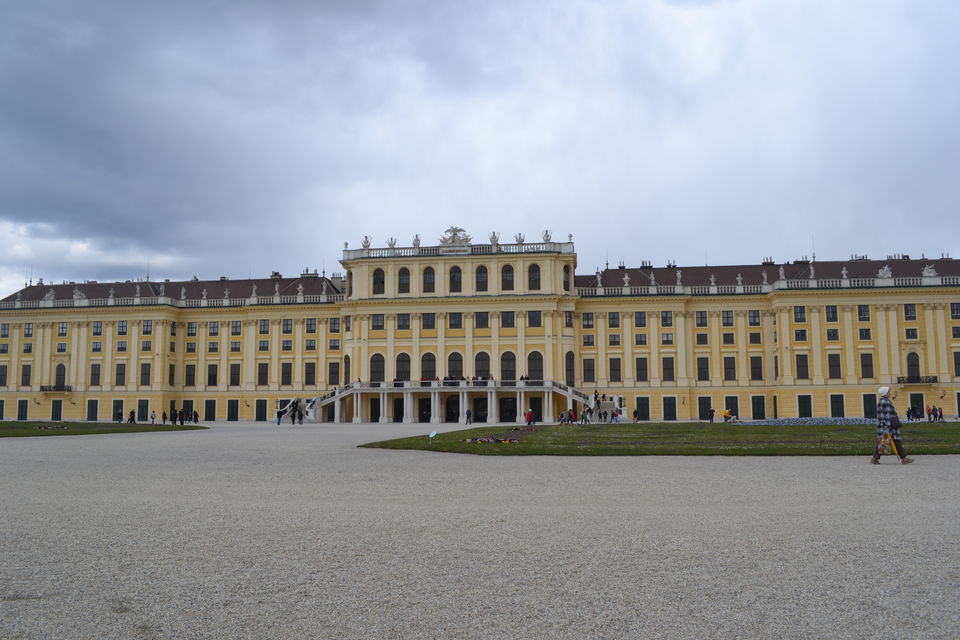 Stephansdom or the St. Stephen's Cathedral is a beautiful Gothic church in the busy centre of Vienna at Stephansplatz. The towering church is ornately patterned and invites you with its delicate and intricate artwork. I remember standing on the pavement across the Church, still and just admiring the architectural brilliance. Don't break your neck as you stretch it to take in the look of the Cathedral in its full glory, though! The Cathedral offers beautiful view of the city from the top. For the health freaks, there are stairs - 343 steps to be precise! For those who would rather take the lift, you are my friend! Just go inside the church and a lift would take you up, of course with a fee. 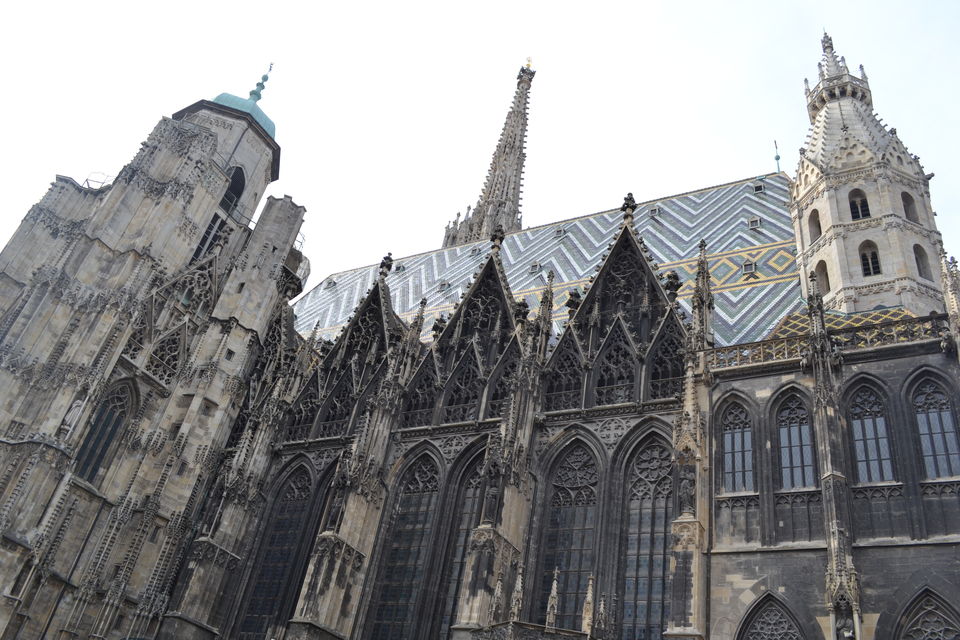 If there is ever a souvenir you want to take back from Vienna, let it be the 3 kilos you will gain from eating all the wonderful food. Sure, Vienna is famous for the Schnitzel, but the chances of you finding one without pork are slim (God bless the chef at our hotel for serving up turkey schnitzel to us everyday!) But if you are like me who won't eat any pork or beef, even better! Because, then you will have all the space in your stomach to gorge on the rich cakes (kuchen in German). First up was the famous Sacher Torte. The Original Sacher-Torte was invented by Hotel Sacher and till this day invite long queues of people wanting a slice of Vienna. The original recipe remains a secret, but it is basically a chocolate cake coated with apricot jam, chocolate icing and topped with whipped cream. It certainly doesn't come cheap, but is worth a try. A walk further down will take you to another iconic bakery of Vienna, called "Aida". A popular bakery in Vienna since 1913, Aida today offers mouthwatering cakes, pastries, macaroons and tarts. They also have their own version of the Sacher Torte. They have different branches all over the city and all are done up in pink decor. 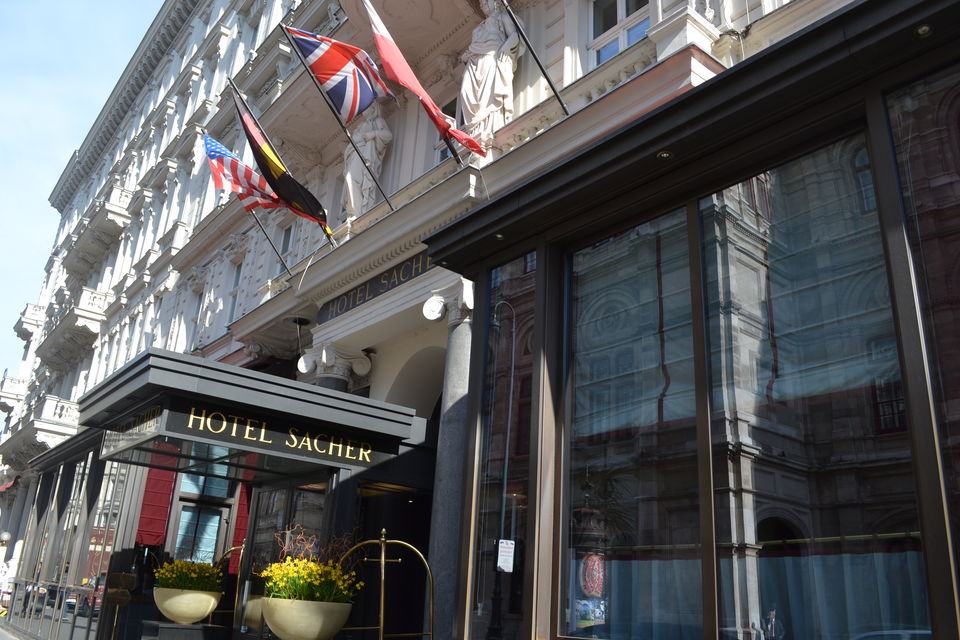 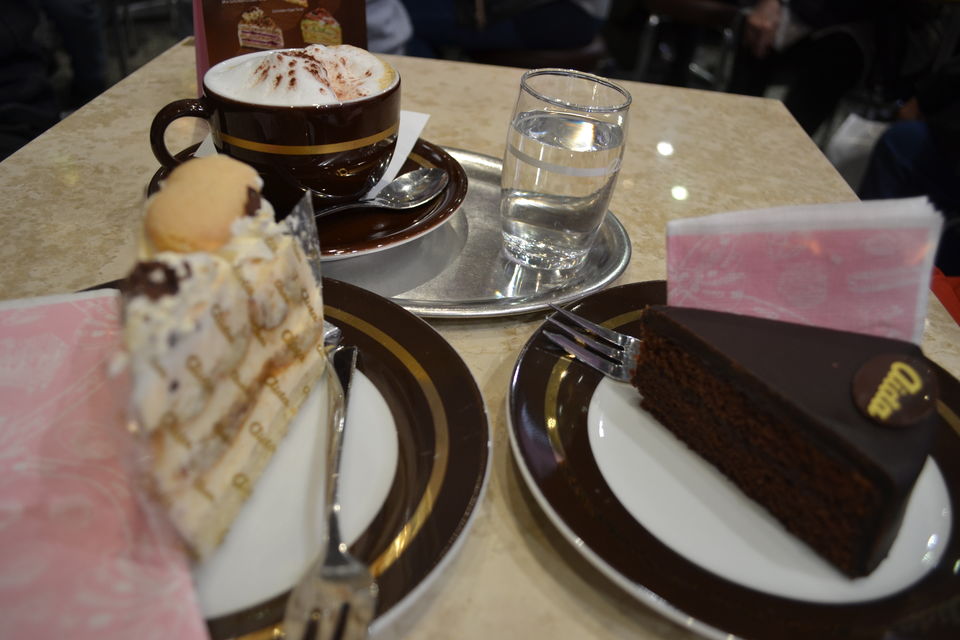 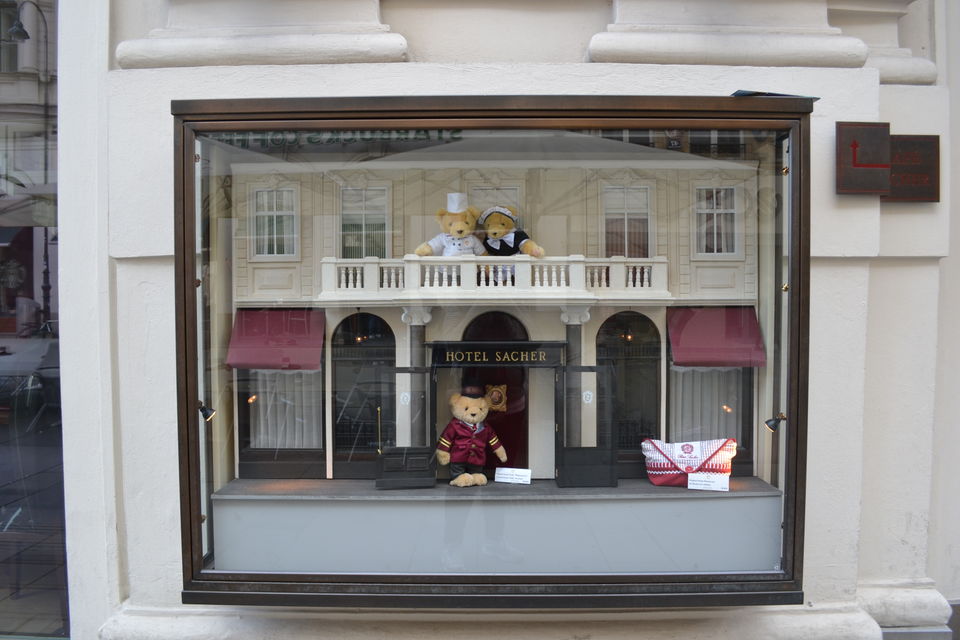