Jallianwala Bagh - A century of a catastrophe but still no apology

By City On Pedals 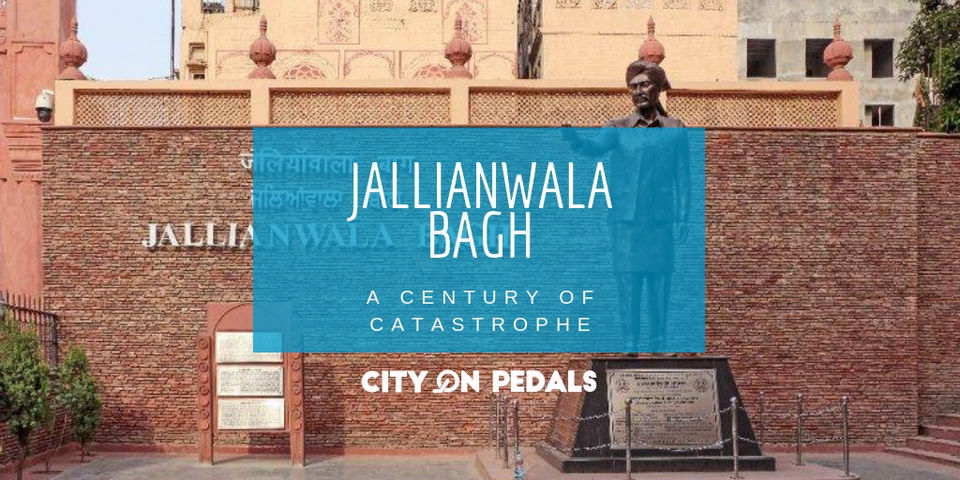 Vaisakhi is observed as a mark of new year in Sikh culture and beginning of the harvest season. Although the freshness of festivity and happiness is all around this day, it has also a blood spot marked to its name for the year 1919 in the saga of India's independence from the British empire.

As they said Swaraj is my birthright and I shall have it but the fight for independence is being never so easy as it seems. Thousands of Braveheart have given their lives so we can breathe in the air of independent India. One of the most important event that is marked in the history of the countries independence is the Jallianwala Bagh Massacre.

This year we will be observing the 100 years of Jallianwala Bagh massacre but still, there's no apology from the British government over the horrific act.

So here we are going to tell you some of the important facts and figures related to Jallianwala Bagh Massacre.

In the year of 1919, Rowlatt act was passed, under which the Indian revolutionaries could be arrested without an arrest warrant and set into jails without any trials. this act caused a wave of anger across the country.

On the date of April 10, 1919, two Indian leaders and revolutionaries Dr. Satyapal and Dr. Kichlu were arrested under the act which made the people furious about the government, to control the intensified anger of the people General Michael O'Dwyer, the Lieutenant Governor of Punjab at that time issued a proclamation to ban all the public meetings and gatherings in Amritsar.

Though the proclamation was issued, no efforts were made to ensure that the general public came to know about it.

General Reginald Dyer, who had been in the city since 11 April, spent the morning marching through the city, forbidding the local residents from leaving the city or gathering in processions or assemblies. By 1:00 P.M., however, finding the weather too hot, he returned to his headquarters. Soon after, he got a report that an alternative procession during the morning was announcing with a gathering at Jallianwala Bagh at 4:30 P.M.

Estimates suggests that by the afternoon some twenty thousand people had assembled in the bagh, but the true reason is not clear till the date some suggests that the people were there merely in the spirit of festival as the bagh was close to the Golden temple while others say they were in open defiance of General Dyer’s proclamation.

There were children and women to in the gathering since it was the festival of Vaisakhi on that day.

After getting the information of the gathering, general Dyer immediately set out with his troops and armoured vehicles towards the bagh.

Jallianwala Bagh was not a park or garden at all at that time, but an unused ground in the shape of an irregular rectangle measuring about 250 yards long and 200 yards wide. Houses built with their back walls to the area had effectively enclosed it on three sides. The fourth side had a boundary wall of around 5 feet, with a few narrow lanes serving as exits.

Dyer marched towards the bagh with the two armoured cars and 50 armed soldiers (25 Gurkhas and 25 Baluchis). Unable to get his armoured cars through the narrow lanes of the park, he approached the ground on foot and stationed his troops, twenty-five on either side of him.

Dyer had ensured that the troops which accompanied him to Jallianwala Bagh consisted of men who were of nationalities foreign to India or recruited from its fringes so that the troops would not hesitate to fire upon fellow Indians. so the Dyer had predetermined plan for firing upon the crowd.

Baluchis were Muslims from the area bordering Iran and the Gorkhas consisted entirely of Nepalese troops. No British troops or officers, except for a few NCOs, accompanied Dyer.

Dyer assembled his forces on a risen platform in front of the crowd, twenty-five on either side of him and without giving any warning or without asking the people to disperse, Dyer ordered the soldiers to open fire.

As the fire started, the crowd panicked and tried to escape from wherever possible. This led to the stampede, killing several people. He even asked the soldiers to shoot directly at those portions which were most crowded.

The firing lasted for ten to fifteen minutes in which 1,650 rounds were fired from a short magazine Lee-Enfield firing a .303 Mark VI bullet. This had a muzzle velocity of 2,000 ft per second and was deadly precise to 500 yards, with a limit of 3,000 yards.

There was a well in the Bagh, people even jumped into it in order to escape bullets and ended up dying in the well. Of course, the bullets killed far too many than stampede and drowning in well. In official records, it is said that 120 dead bodies were pulled out of the well.

False official reports were released by the British government stating that 379 were killed and 1,100 wounded.

In the official statement Dyer said, "I fired and continued to fire until the crowd dispersed, and I consider this is the least amount of firing which would produce the necessary moral and widespread effect it was my duty to produce if I was to justify my action. If more troops had been at hand, the casualties would have been greater in proportion. It was no longer a question of merely dispersing the crowd, but one of producing a sufficient moral effect from a military point of view not only on those present but more especially throughout the Punjab. There could be no question of undue severity.

The Governor of Punjab at that time, Micheal O’Dwyer supported Dyer’s actions. O’Dwyer was dismissed for his actions in Punjab in the subsequent year.

The news of the event reached Britain in December 1919 when the Hunter Committee was formed for inquiry. Before the Hunter Committee started its proceedings, the governments pass the Indemnity Act in order to safeguard his officers. As expected, General Dyer walked clean except that he was called back to England after resigning.

Dyer received a hero welcoming at a way back home

Though Dayer was reviled by the Hunter Commission, British Parliament welcomed Dyer as a hero in the House of Lords.

On his deathbed suffering from the arteriosclerosis, he reportedly said, “So many people who knew the condition of Amritsar say I did right, but so many others say I did wrong. I only want to die and know from my Maker whether I did right or wrong.” After suffering a series of strokes Dyer died of cerebral hemorrhage in 1927.

The fire of revenge

Among those who managed to escape from the bagh was 21-year-old Udham Singh, an orphan raised at Putlighar in the holy city. Twenty-one years later, on March 13, 1940, shot Michael O’ Dwyer at Caxton Hall in London redeeming the vow he had taken on April 13, 1919.

A false statement that we still hear today is that Udham Singh ‘shot the wrong Dyer’. Actually, he did not he knew well that the man he was attempting was not the man who had ordered fire at the Bagh, but the then Lieutenant Governor of Punjab, who was as much to blame, if not more, for the slaughters he carried out.

Ever since the firing of 1919, there has been a call from India that the British Government apologizes for the mass killing. These become louder every time a constituent of the British Royal family or a British Prime Minister visits India. However, let alone an apology will do nothing, the then British Government rubbed Indian salt into Indian wounds by not even punishing Dyer for his gruesome action. The British Government instead showed disrespect to the Indian sensibilities by giving Dyer a grand funeral when he died in 1927.

The Indian National Congress created a memorial for the innocent souls who perished on an unfortunate day and the unique memorial was inaugurated by Rajendra Prasad in 1961.

There would be no Jallianwala Bagh massacre had it not been for one man, who decided to teach Indians a lesson. Hundred years after his death, Col Reginald Dyer, called the butcher of Amritsar, remains a puzzle.

Expectedly, as dated on 9 April 2019, in a debate in the House of Commons, the British Government refused to apologize for the Jallianwala Bagh massacre.

Even though the narrow entrance of the bagh may not scare you today. it would directly lead you to the open garden where you can sit by the observe the red stone monument. A pillared corridor with the engravings of Ashoka Chakra reciting the stories of the unity and oneness of this country leading you to the small museum founded in the remembrance of the people who never thought once while giving their lives for the country.

Though there is a little seriousness and fear at the Bagh itself today, the butchering that took place here a century ago lives on in our consciousness as an ultimate interpretation of colonial violence. You can still see the marks of firing without warning on an unarmed and innocent crowd by the general which will surely burn your heart for the horrendous act that took place a century ago, the crying of the people, mothers jumping with their newborns into the well to safeguard them from the English bullets, people hiding themselves behind the walls and trees and running over one another so that they can save their life.

Do visit the Bagh and try to imagine the struggle and pain of those time, and have the essence of Independence for which our forefathers and other freedom strugglers have given their life upon so we can be one independent united India.