An overnight train journey got me to my last Nordic destination in the trip, Copenhagen. Like Stockholm, the Danish capital also was a day trip to me. The stay in Nordic countries can get a little expensive while travelling on a budget, and so is the food. I sort of hacked my way out of it. Except for the Couchsurfing in Rovaniemi, all my nights since I set foot in Scandinavia were spent in trains. City by the day and travel by the night. My Eurail pass and excellent railway lounges in these countries came really handy. My pass gave me access to most of the lounges across Europe - so I used them to freshen up and rest, and the most useful part for food. These lounges offered refreshments and meals for free along with the access. Some of the train in Nordic also gave snacks, so most of my meals in Nordic were sponsored by railways and of course Eurail.

Originally a Viking fishing village, Copenhagen has been the capital of the Danish rule for over five centuries now. Today it is the cultural, economic and governmental centre of the Denmark. With a long history of being the ruling city on Danish - Norwegian kingdoms, the city is dotted with many historical structure. They form the major tourist attractions in the city. Post the plague and fire of 18 th century, the city underwent a redevelopment plan which diversified the architectural landscape of the city. Again in 19 th century post the bombing of the city it rose back adding neoclassical structures to its architectural heritage. With every distress the city grew up adding more colours to it.

Since I was on a day trip in Copenhagen and did not have much time to soak the city in, I again resorted back to the most efficient way I learnt to discover a city while travelling in Europe; The free walking city tour. Like in Stockholm, here also I decided to do two such walking tour - in the morning I took up the Grand Tour of Copenhagen and post lunch the Tour of Christianshavn. Owing to the claimed freedom of Christianshavn, I will leave that out here and will dedicate another post to them. 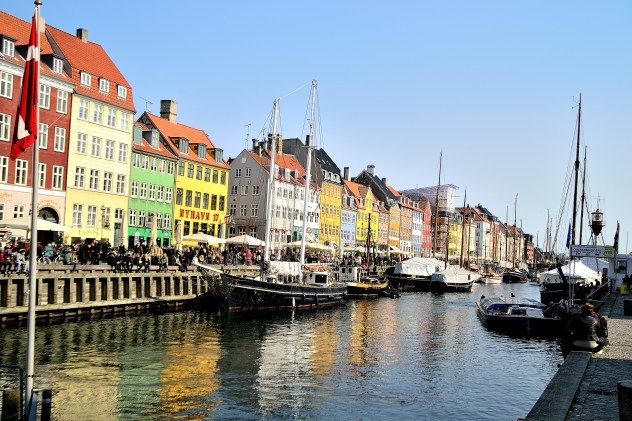 The grand tour of Copenhagen starts at 11 AM from the city halls steps and follows the most efficient route to show around the city. It goes through the Christiansborg Palace, Old City Centre, the Nyhavn harbour and finishes at the Amelianborg palace where we witnessed the change of guards. These walks help you much more in knowing the place than just checking the items off your tourist checklist. Post the walk I headed to the Kastellet, which is one of the best preserved star fortress in the Northern Europe, housing historical sites but serves mainly as a public garden. Right outside it by the waters in the famed statute of the Little Mermaid. From here I rushed back to the start point for my second walking tour of the day which I didn't want to miss since it was about the free town of Christiania.

After two walking tours I still had a lot of time at hand but city necessarily went quite after about 9 PM. To save my money on food I took an unnecessary random ride on train to have a meal and then waited at railway station till 2 AM for my journey which would take me to Hamburg in Germany after changing three trains.

This blog was originally published on 'Neelendra Nath'