Our journey started around 10:30 am on Thursday of 6 December 2018 and within an hour we were in Ghaziabad, Delhi NCR region. Although a bit slow moving traffic soon we were running smooth.The original plan was to cover 219.3 Km within 5 hours to reach our destination. To accompany me was my family and my sweet car Tata Manza. We reached Haridwar by 4:30 pm. It took us 6 hours as we had few layovers.

We took the National Highway NH 334 which leads us to our destination i.e Haridwar. On our way, We crossed 3 states which are Delhi, Uttar Pradesh and Uttrakhand. The best and quickest route to reach Haridwar is shown below. On our way, we cross the major cities like : Delhi - Ghaziabad - Modinagar - Muzaffarnagar - Roorkee - Haridwar. 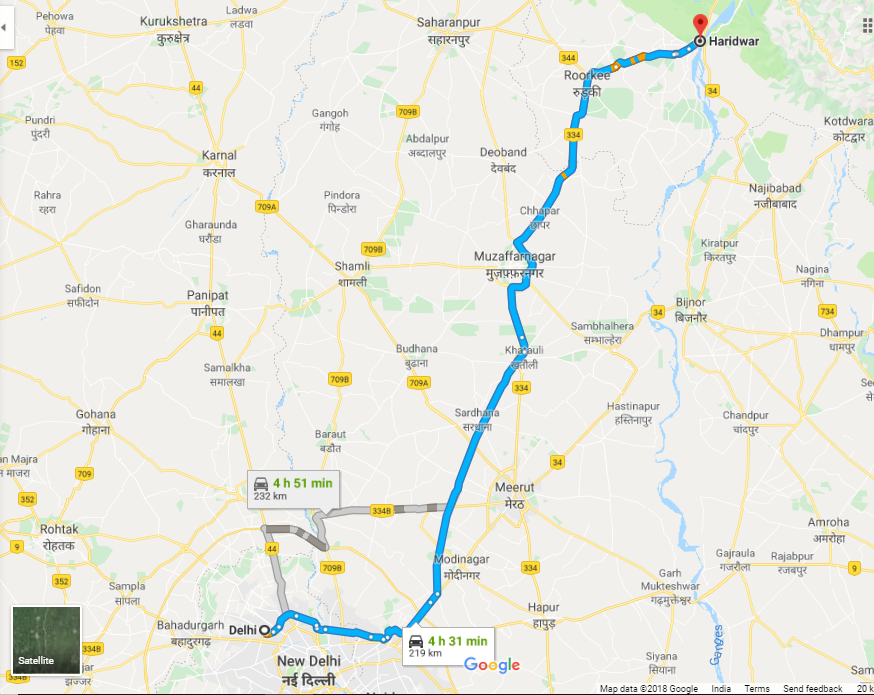 The time taken to reach Haridwar was approximately five hours and thirty minutes.

Road trips have always been one of my favourite ways of exploring a place. One of the significant reason I love road trips is the comfort and the flexibility it offers. the car's Steering is always in your hand whenever you feel like to soak in a destination which wasn't planned, you can easily do that without any issues all you need to do is make a little change in your original plans. We had a quick little break around 2:50 pm on a dhabha and had some paranthas with tea. And that tea was amazing. It was kulad tea.Regardless I wish I could drink that at this moment and a few paranthas with butter and curd with some tang pickles are always delicious.

This time I was travelling and spending time with my family. I could see and feel the thrilling energies in my parents and I felt that it was my duty to add the extra spark and make them do fun activities that they have never done or seen before. 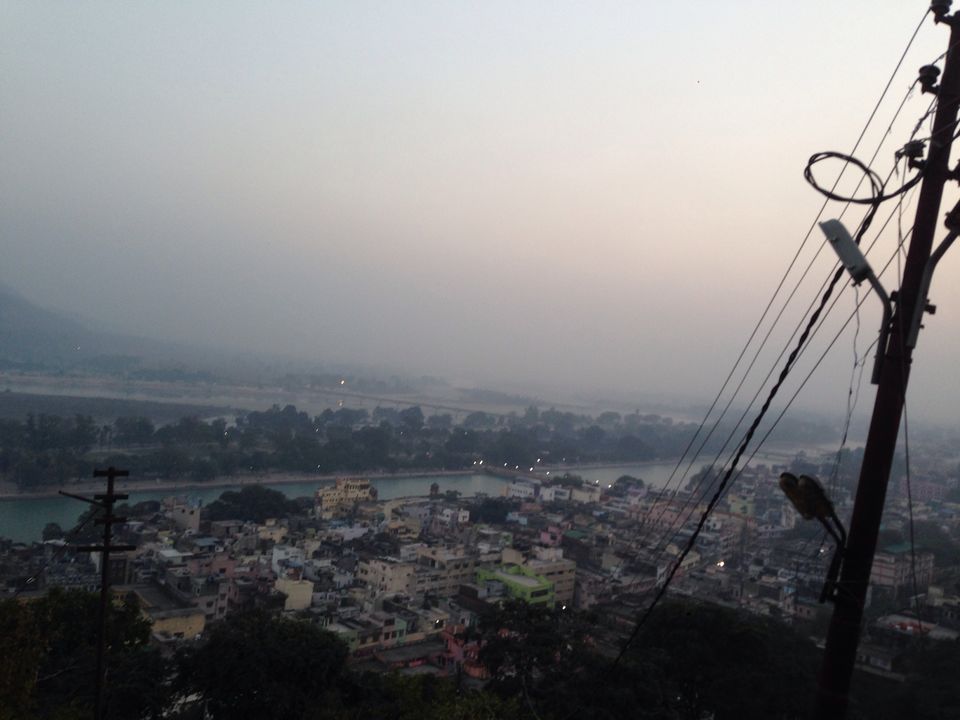 As I mentioned earlier, we reached our destination by 5:30 pm. We quickly booked our Hotel and dumped our stuff there. After that, we quickly headed towards the Mansa Devi Mandir and I knew within an hour it will get dark and I wanted to experience the sunset from the top of the hill where Mansa Devi Temple was situated. Then, we quickly headed towards the trolley which was supposed to take us to the top of the hill with no time. Unluckily, the trolleys were being repaired and were not open on that day. Hearing that my parents said, "oh, we missed the opportunity." And that was the time I grinned, Why grinned? It's because I wanted to climb that damm hill on foot, not on the trolley. No offence to trolleys as what I feel is, Climbing that hill on feet would make you realize what it feels like to reach the top rather than sitting in the trolley and reaching to the top without putting an extra effort. It took a little effort to get convinced but finally said "Okay". So, for my parents comfort we took a rickshaw for about 70% of our way and we had to climb the rest 30%. And I am glad that we took the right decision to take a rickshaw, as my mum was really tired climbing the 30% of the hill. 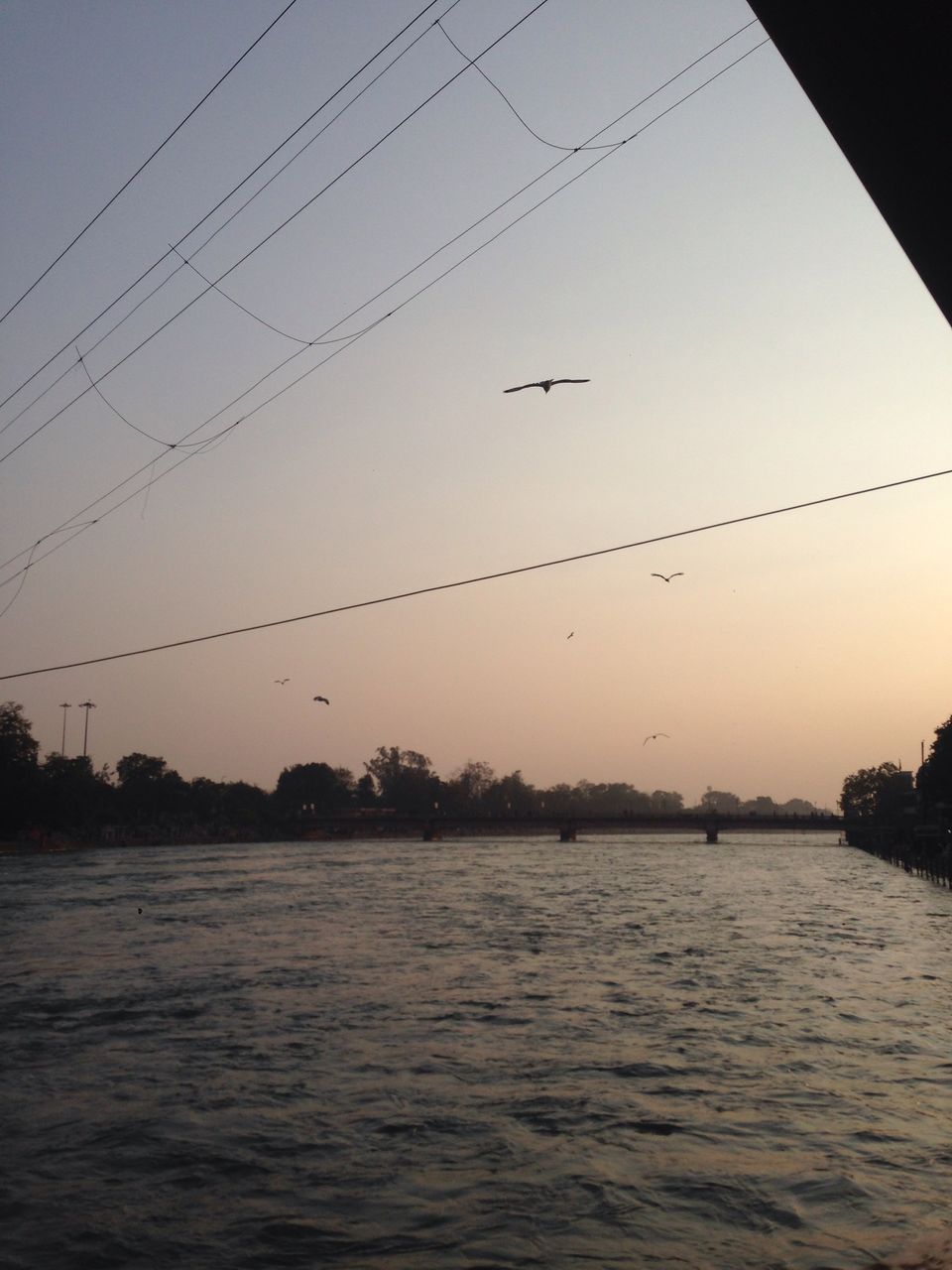 Even though it was dawn but we were not alone, we were accompanied by a few other people and the native of the trees .i.e Monkeys and Peacocks. It was fun to watch the baby monkeys hanging on their parents and jumping from one branch to another. Even those creatures entertained us on our way. I didn't click any photographs of those notorious monkeys as they were so unpredictable and snatch everything that is in your hands. I couldn't see my phone being snatched and chose not to click pictures of them. After so many efforts we reached the top and the view from the above was super thrilling and to add the spice to the view it was the sunset. The sun was slowly and steadily was going towards its den and the darkness was covering the sky. It was one of the best views to experience the entire city was in front of my eyes and I was just standing there and gazing the sun setting down and the night lights started to shine.

We reached the top of the hill where Mansa Devi Mandir was located. We entered the temple and offer our prayers to all the god and goddess. and to our surprise, it was Aarti time. The priests were doing Aarti and the gongs were being beaten. It was so good. The Mansa Devi temple is located atop the Bilwa Parvat on the Sivalik Hills, the southernmost mountain chain of the Himalayas. The temple, also known as Bilwa Tirth is one of the Panch Tirth (Five Pilgrimages) within Haridwar.

The approximate height of the Bilwa Parvat on Shivalik Hills is 540 Km whereas the pedestrian path is around 3 Km. It was almost dark when we started descending from the hills. At around 7:00 pm we reached the plains and the moment we landed on the foot of the hills my legs started trembling and shaking, It was a bit weird initially but whenever you ascend and descend from the stairs the legs get a bit shaky. 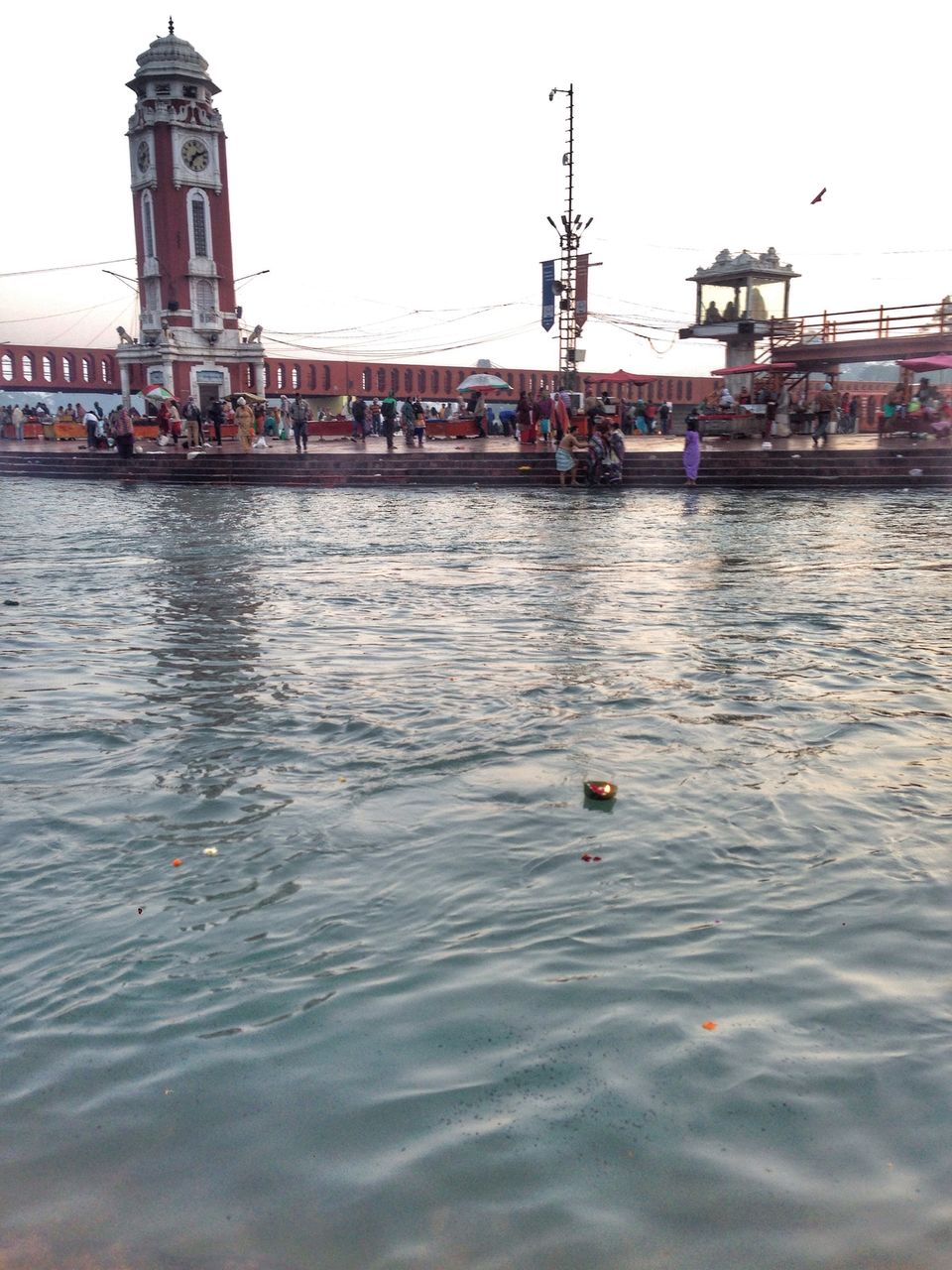 After that we explored the markets present there and had our dinner and took a long walk near the Holy River Ganga. Although the winds were freezing cold I Liked a bit chilly weather. After that within no time, we fell asleep.

The next morning started a bit early at 6:00 am. As I wanted to experience the rising of the sun from the hills and I was super excited to make my parents watch the sunrise. We got ready within an hour and left our hotel room. The weather was super chilly and I was busy figuring out the best location to experience the sunrise. And finally, I found the stairs of the bridge perfect for the view. We stood there and saw the sky going red to orange and yellow as soon as the big yellow ball appeared. Within 5 minutes, a tiny dot turned into a huge ball. 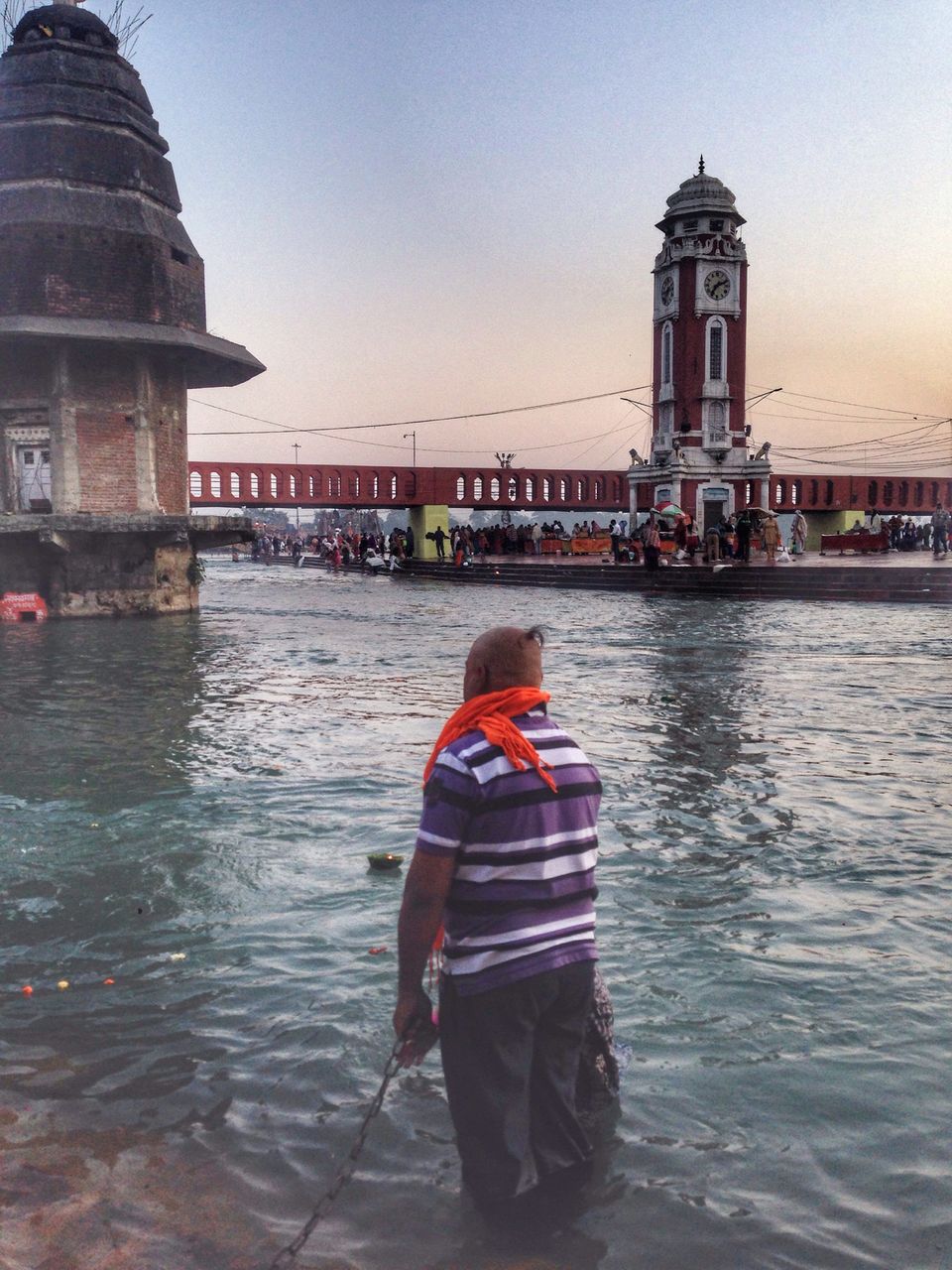 We took a dip in the cold and chilly holy river, Ganga. And explore all the temples present there. Had our brunch and as planned we now had to leave for Delhi, to my Surprise my dad turned the car towards Rishikesh and we now started heading towards Rishikesh. It was about 19 Km away from Haridwar, an hour-long drive It's because of the curvy hilly roads. 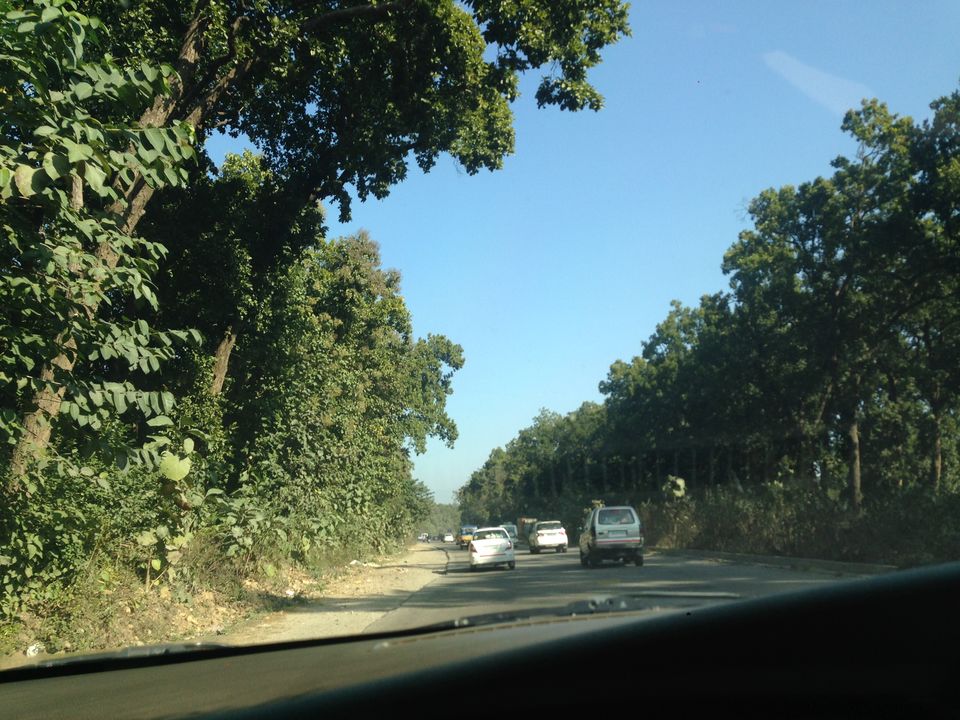 We encountered some of the best roads by best I mean "Both sides of the roads were covered with dense trees and the magical hills were in the front". Once we reached Rishikesh, we saw Lakshman Jhulla (Bridge) and reached the other side of the river where many more temples were located. We visited all those temples and walked for about 2 Km to reach Ram Jhulla. The views from the Bridges were breathtaking. It is the place where river Ganga enters into the plains. We stayed there for a few hours and finally decided to Get back to Delhi. 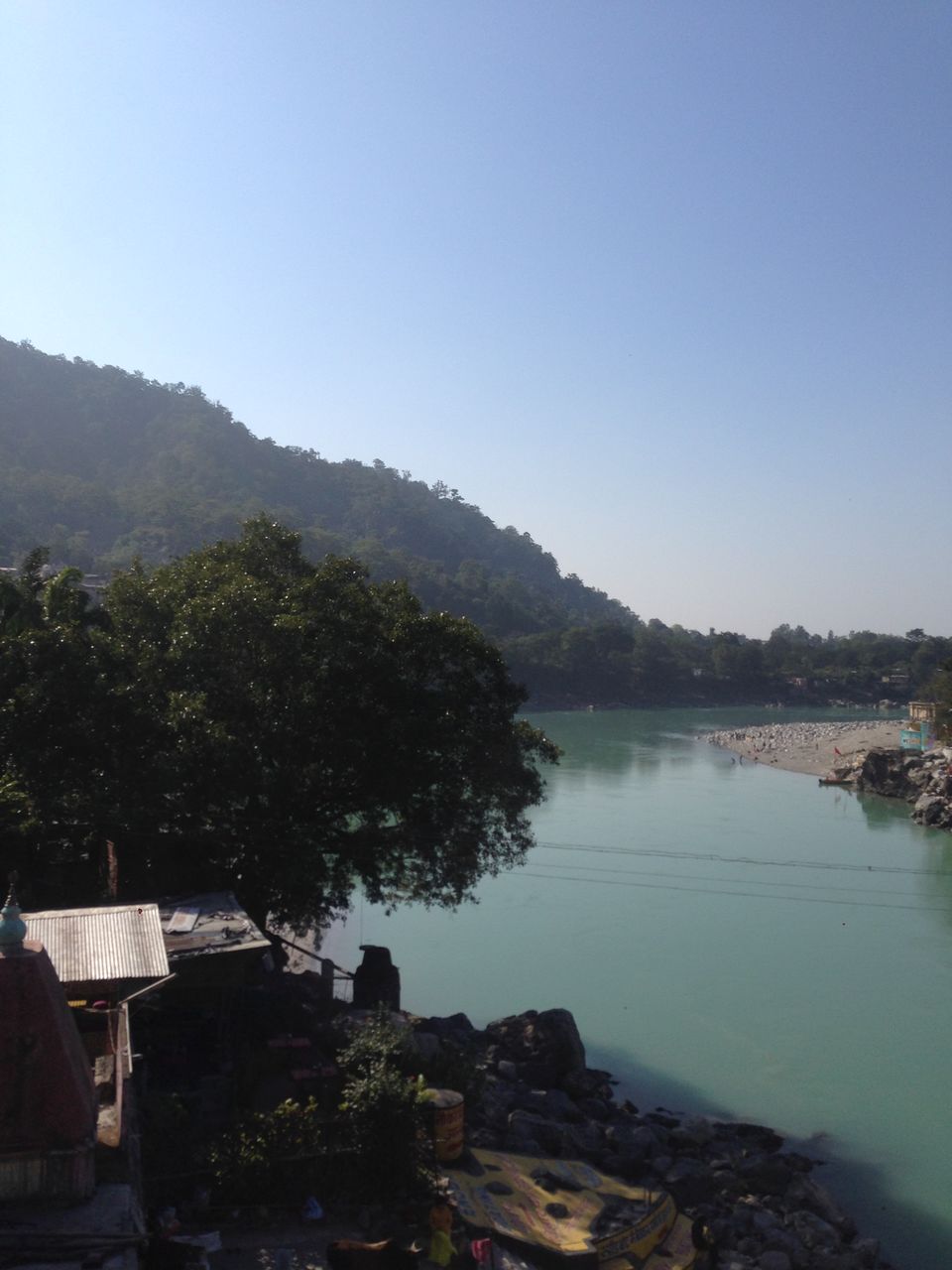 Again we turned our car to Delhi. And around 8:00 pm we finally reached our sweet home. Overall, the Experience of having a small getaway brought new energies and we are even more excited to explore the remaining places.