India is the land where Buddhism originated. A religion founded on the belief of peace, nonviolence and spiritual awakening it propagated far and beyond the borders of India. While in a host of countries it is the primary religion; in India Buddhism has been restricted to only pockets primarily in the high Himalayas. It is here that Buddhist monks have been seeking solitude for centuries to meditate and pray, and in their effort to attain spiritual enlightenment have build beautiful monasteries in the mountains. The abode of Buddhist monks, for a long time these monasteries remained isolated from the world outside have now opened up to theists, atheists and agnostics who can marvel at these dizzyingly coloured temples. The surrounding mountains reverberate with the mystical chants of "Om Mani Padme Hum", emanating from the holy confines of the monasteries. One can have a soul searching experience in one of these monasteries in the hills of West Bengal, Sikkim and Arunachal Pradesh.

Durpin Dara Monastery, Kalimpong: Kalimpong’s largest monastery, formally known as Zangtok Pelri Phodang, sits atop panoramic Durpin Hill (1372m). There are rare Buddhist manuscripts on Tibetology inside called "The Kangyur" of 108 volumes. These were presented by Dalai Lama during his visit to Kalimpong in 1956 and the monastery was consecrated by the Dalai Lama when he revisited in 1976. There are impressive religious murals in the main prayer hall downstairs (photography is permitted), interesting 3D mandalas (visual meditation aids) on the 2nd floor, and stunning Kanchenjunga views from the terrace. Prayers are held at 6am and 3pm.

The monastery is located about 5km south of the town center, and is most easily reached by taxi (one way Rs 200). 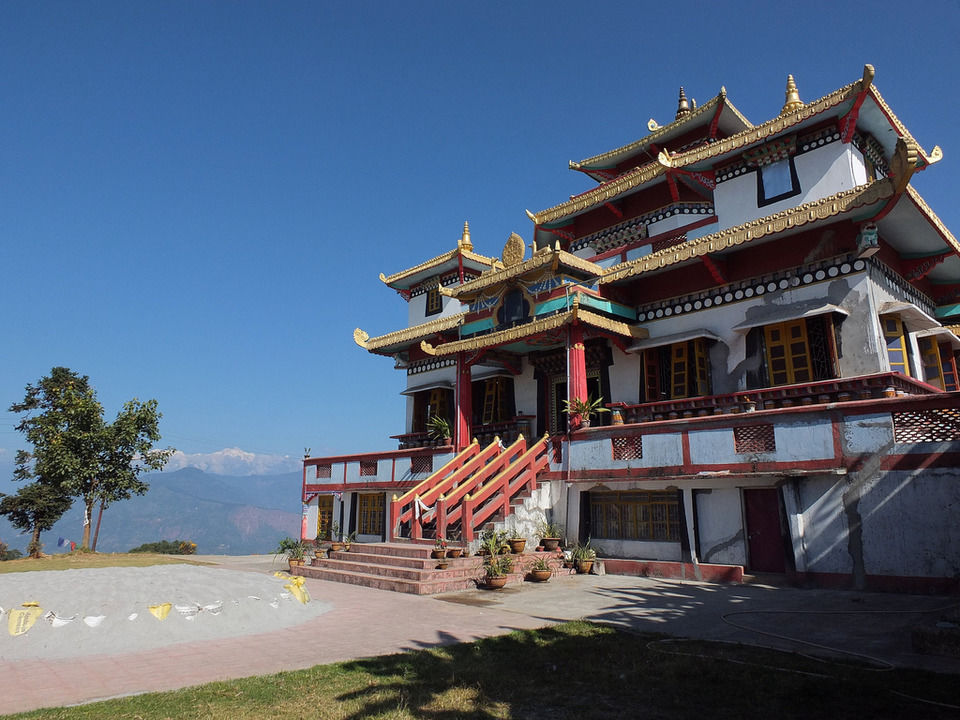 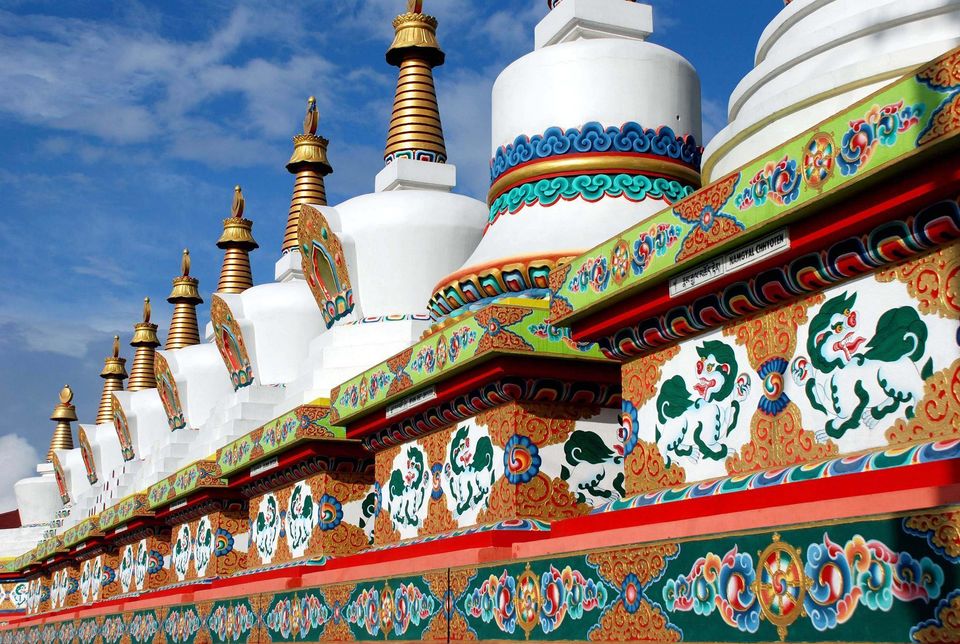 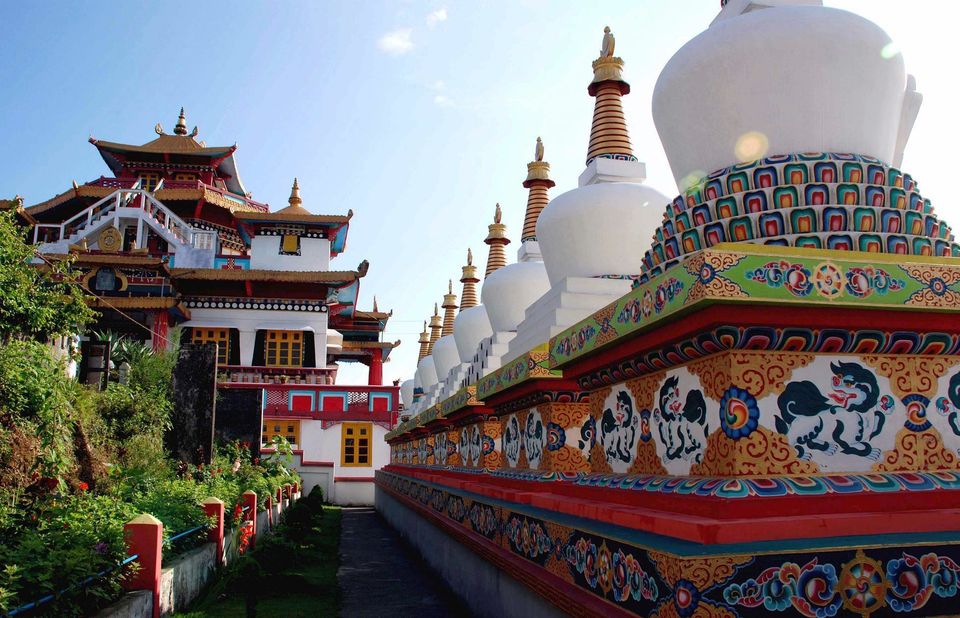 Lava Monastery, Lava: Lava Monastery or Kagyu Thekchen Ling monastery is situated in a small village of Lava. In 1987 the Buddhist community present here offered 3 acres of land to the 3rd Jamgon Kongtrul Rinpoche for building a monastery for the local community. From here one can get a clear view of the enchanting forests surrounding the town and the breathtaking view of the mighty Kanchenjunga. With the ambiance of serenity punctuated by chirping of birds, the place bears an heavenly ambience.

Lava is 32 kms from Kalimpong town. The closest railway station is NJP at a distance of 120kms. Taxis and shared jeeps are easily available there which takes about three 3.5 hours to reach Lava. Bagdogra is the nearest airport. 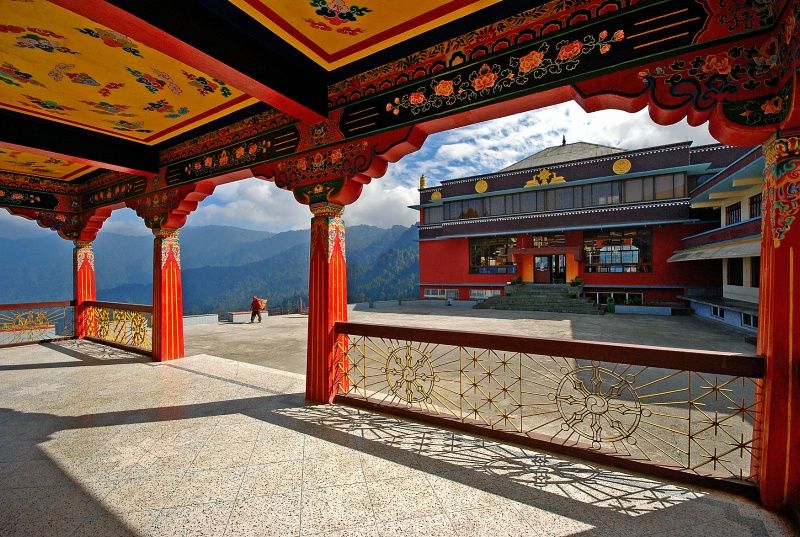 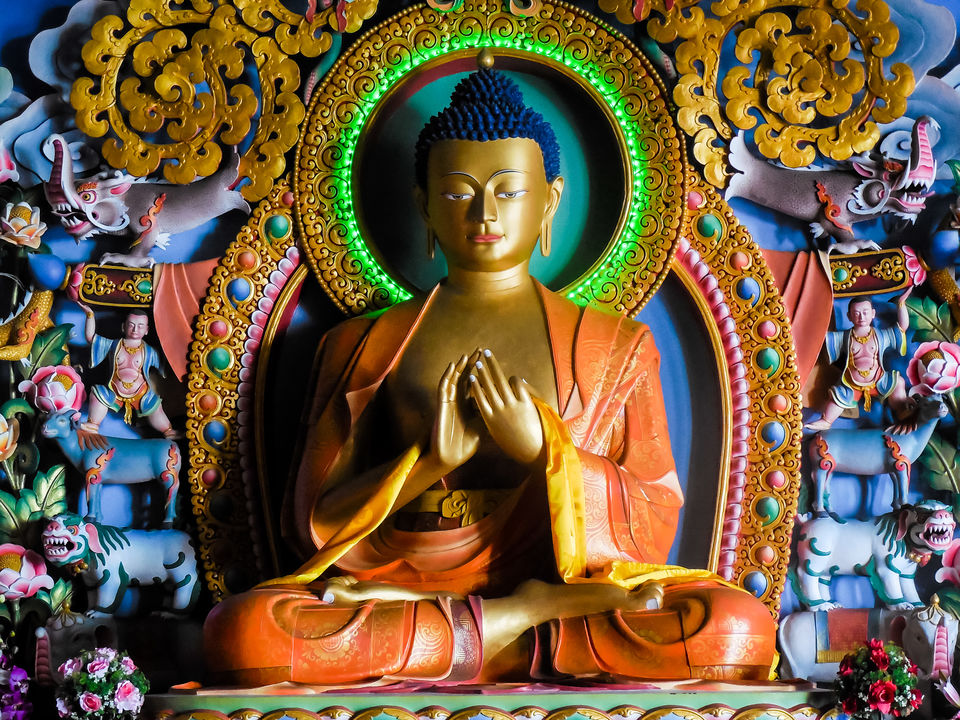 Darjeeling: In Darjeeling, the two monasteries that are worth visiting are the Ghoom Monastery and the Bhutia Busty Monastery. 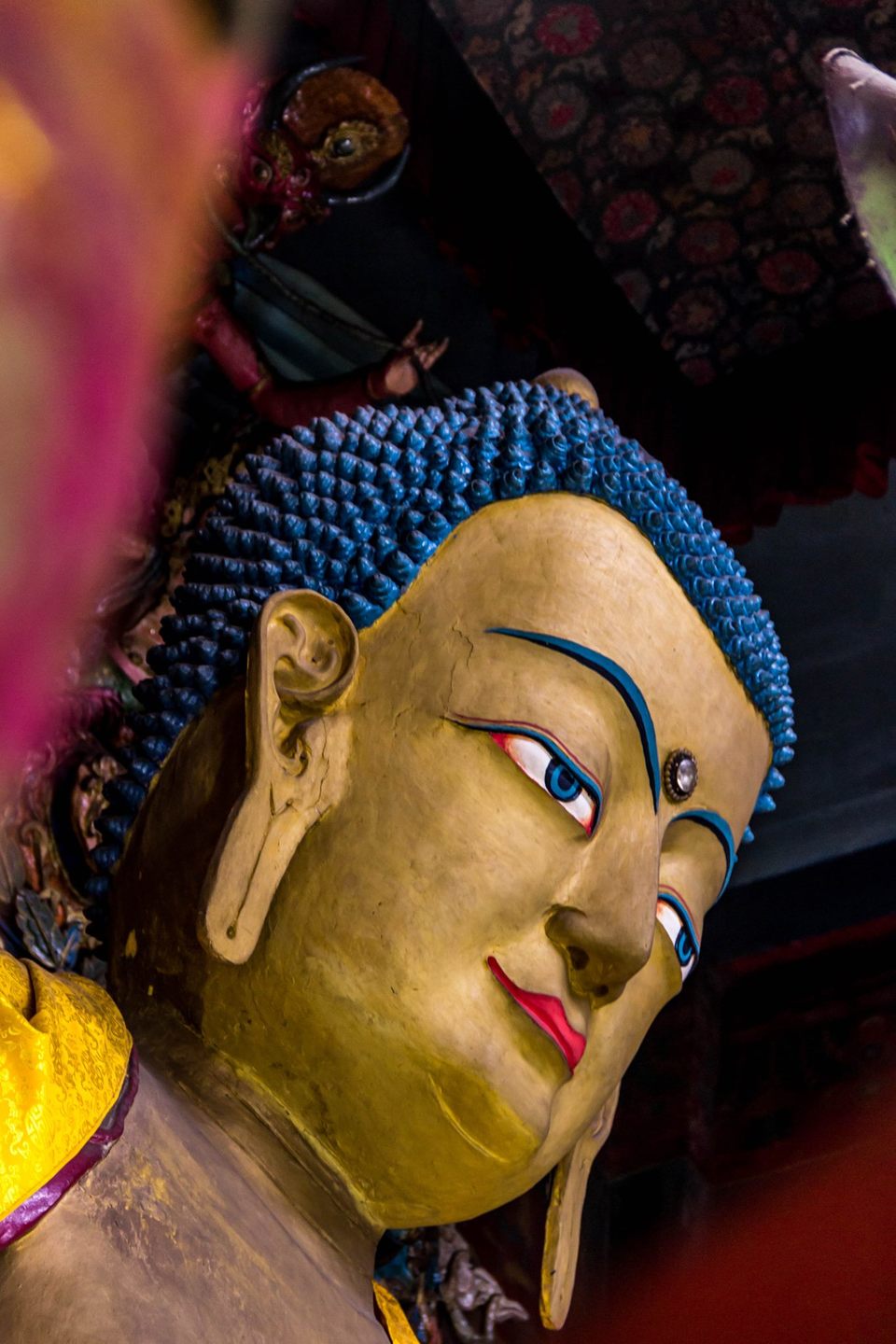 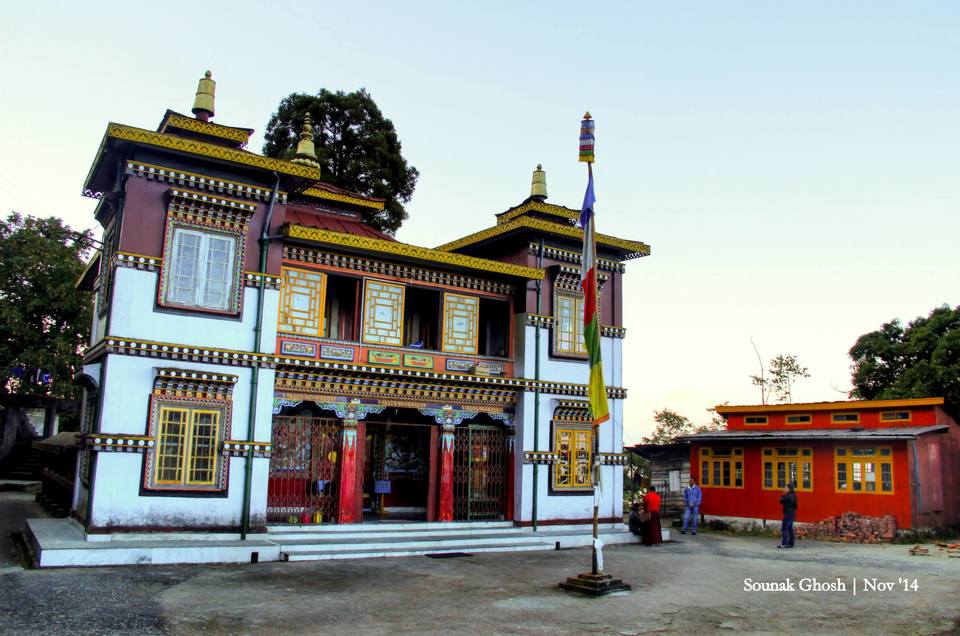 Rumtek Monastery, Gangtok: Rumtek Monastery, also called the Dharmachakra Centre, is located near Gangtok. Originally built under the direction of Changchub Dorje, 12th Karmapa Lama in the mid-1700s, Rumtek served as the main seat of the Karma Kagyu lineage in Sikkim for some time. When Rangjung Rigpe Dorje, 16th Karmapa, arrived in Sikkim in 1959 after fleeing Tibet, the monastery was in ruins. Despite being offered other sites, the Karmapa decided to rebuild Rumtek. With the generosity and help of the Sikkim royal family and the local folks of Sikkim, it was built by the 16th Karmapa as his main seat in exile.

Rumtek is the largest monastery is in Sikkim and located 24 kilometres (15 mi) from Gangtok, the capital of Sikkim. 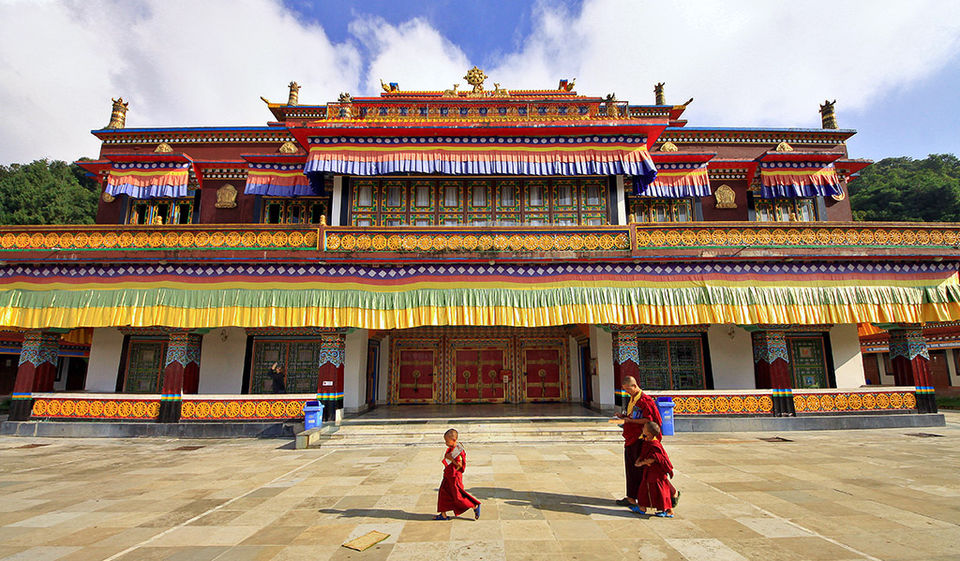 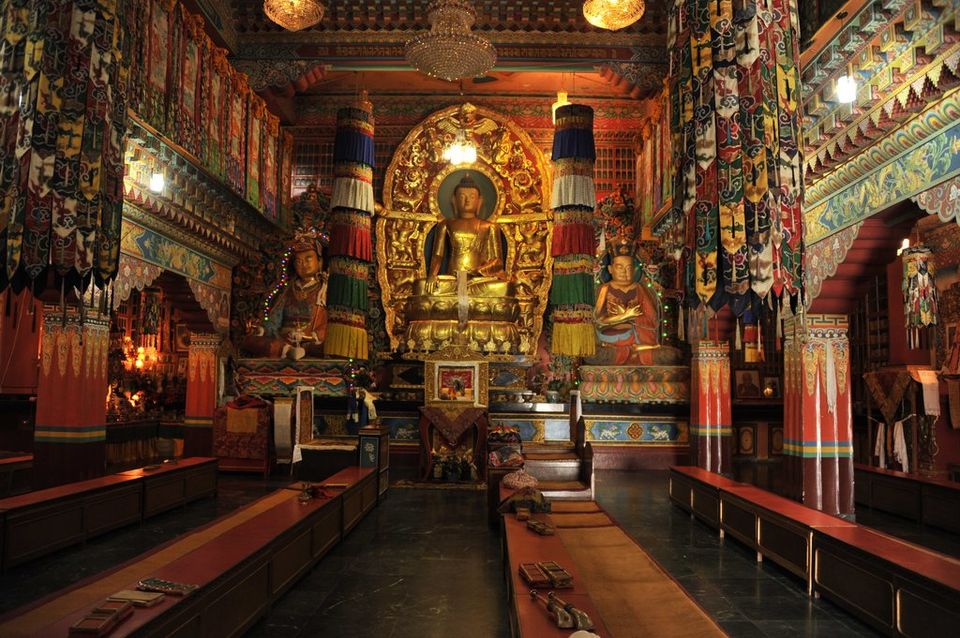 Enchey Monastery, Gangtok: This monastery is situated in Gangtok on a hill top. It was built during the reign of Thutob Namgyal in 1909. It belongs to the Nyingma order of Vajrayana Buddhism. The literal meaning of Enchey Monastery is the "Solitary Monastery". As, according to a legend, Guru Padmasambhava had subdued the spirits of the Khangchendzonga, Yabdean and Mahākāla here. In view of this legend, the religious significance of Enchey Monastery is deeply ingrained in every household in Gangtok. It is also believed that these powerful deities always fulfil the wishes of the devotees.

Detor Cham is the colourful and vibrant Cham dance festival that is held in the monastery during on the 18th and 19th day of the 12th Lunar month of the Tibetan calendar, corresponding to the dates during January/February of the Gregorian calendar. 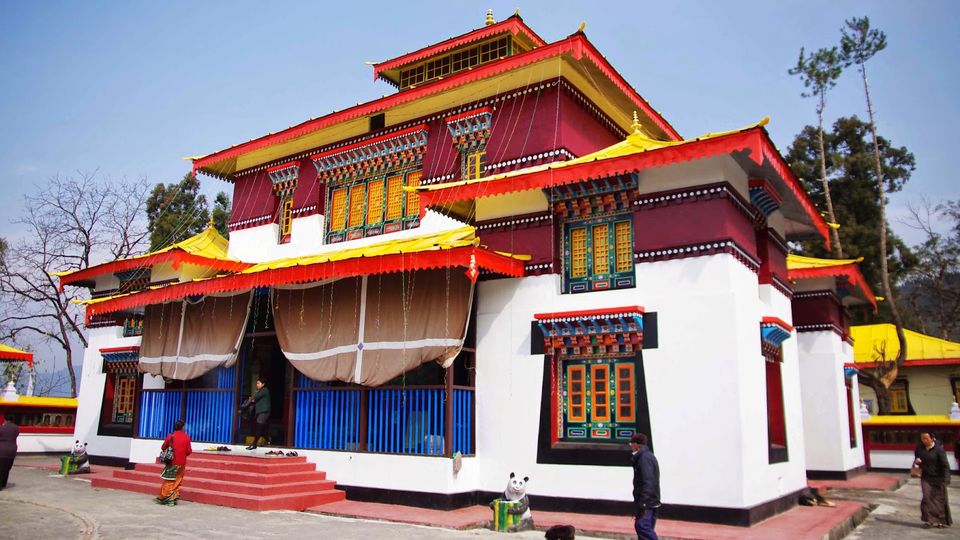 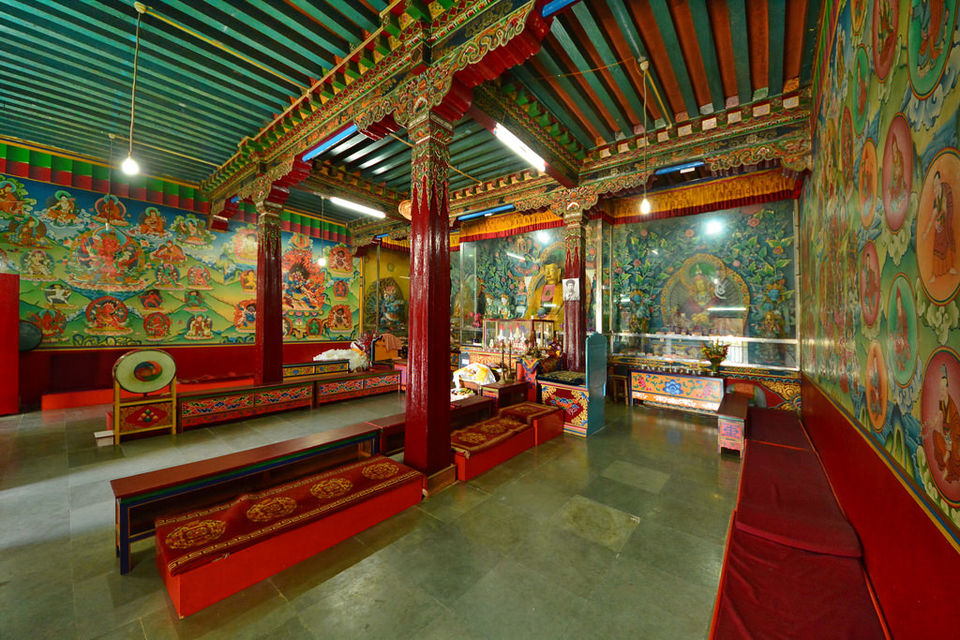 9th Karmapa was invited by the king of Sikkim, where he founded three monasteries : Rumtek, one of the most important monastery of the Karma Kagyu school of Tibetan Buddhism, Phodong and Ralang Monastery. 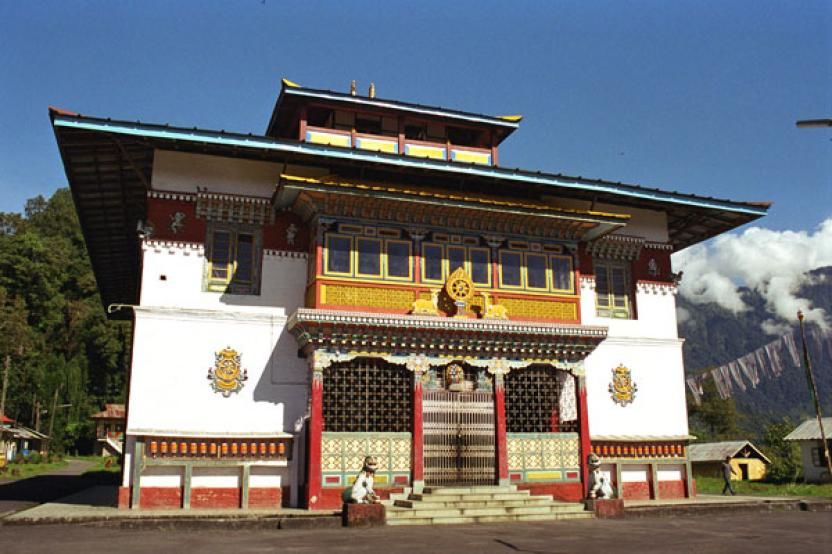 Lingdum Monastery, Gangtok: Ranka Monastery (also known as Lingdum Monastery) which is located about 20kms from Gangtok town is one of the most wonderful monasteries in east Sikkim. The monastery is spread out in a vast area with great scenic views. Since it's relatively a new monastery and does not have much historical or strategic significance like Rumtek Monastery, it is not much talked about. Nevertheless, it is surrounded by lush hills in a divine atmosphere and is one of the most intricately decorated monasteries of all. 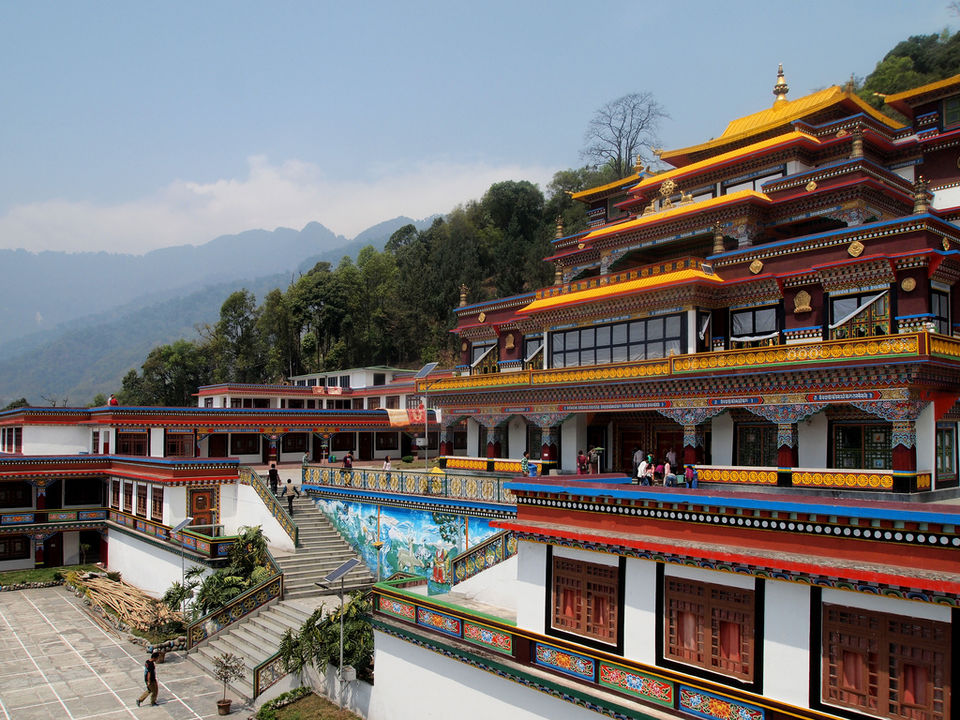 Tashiding Monastery, West Sikkim: This is an important monastery belonging to the Nyingmapa order and is about 40 kms. from Pelling. It lies nestled on the top of a hill that looms up between the Rathong river and the Rangit river and is surrounded by a profusion of Prayer flags that flutter in the air. Tashiding means “The Devoted Central Glory” and the monastery by this name was founded in 1641 by Ngadak Sempa Chempo Phunshok Rigzing who belonged to the Nyingma sect of Tibetan Buddhism. Ngadak was one of the three wise men who held the consecration ceremony crowning the first King of Sikkim at Yuksom. It was extended and renovated in 1717 during the reign of the third Chogyal Chakdor Namgyal. 'Bhumchu Ceremony' or festival is a popular religious festival that is held on the 14th and 15th day of the first month of Tibetan Calendar. 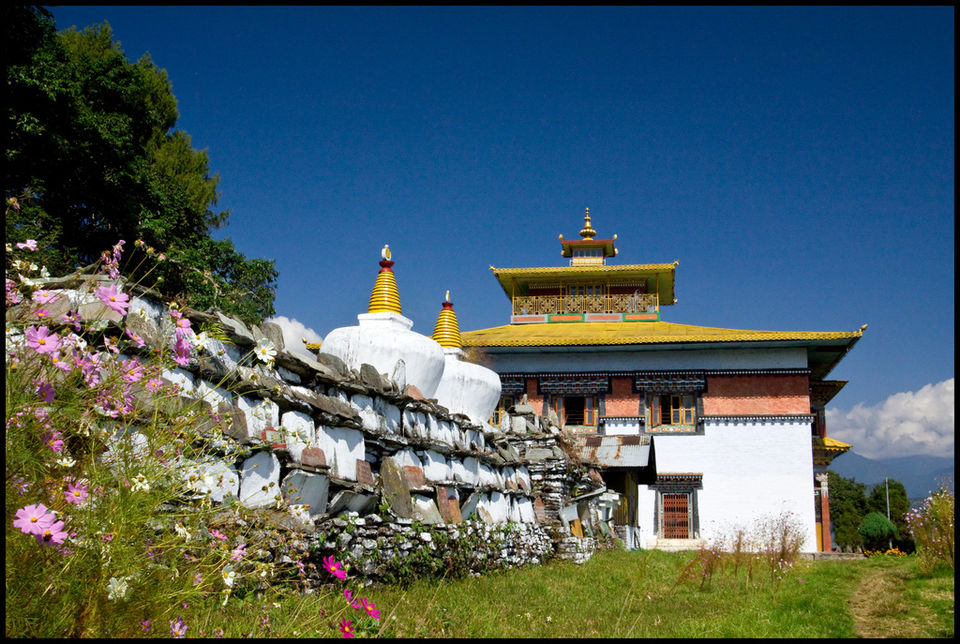 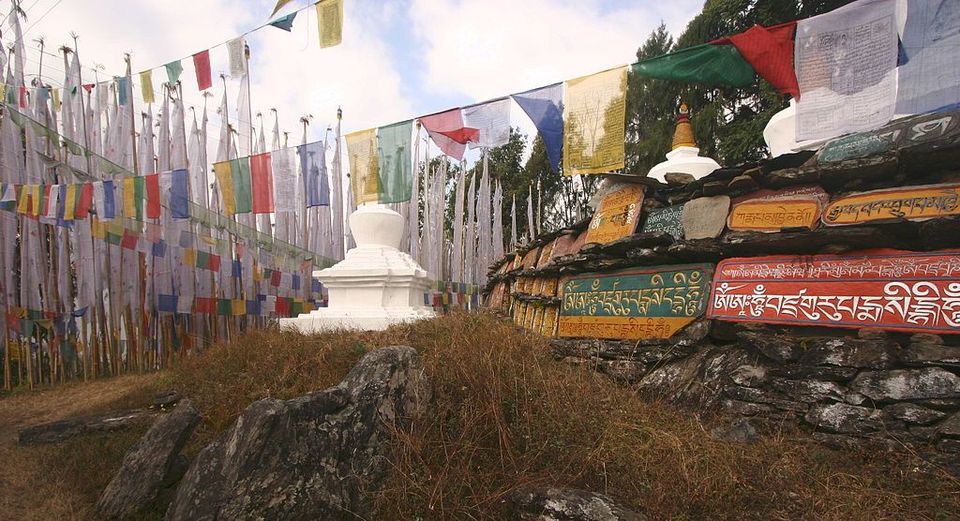 Pemayangtse Monastery, Pelling: Planned, designed and founded by Lama Lhatsun Chempo in 1705, it is one of the oldest and premier monasteries of Sikkim, also the most famous in West Sikkim. It is situated in the town of Pelling. The monastery follows the Nyingma Order of Tibetan Buddhism and controls all other monasteries of that Order in Sikkim. The monks of this monastery are normally chosen from the Bhutias of Sikkim. 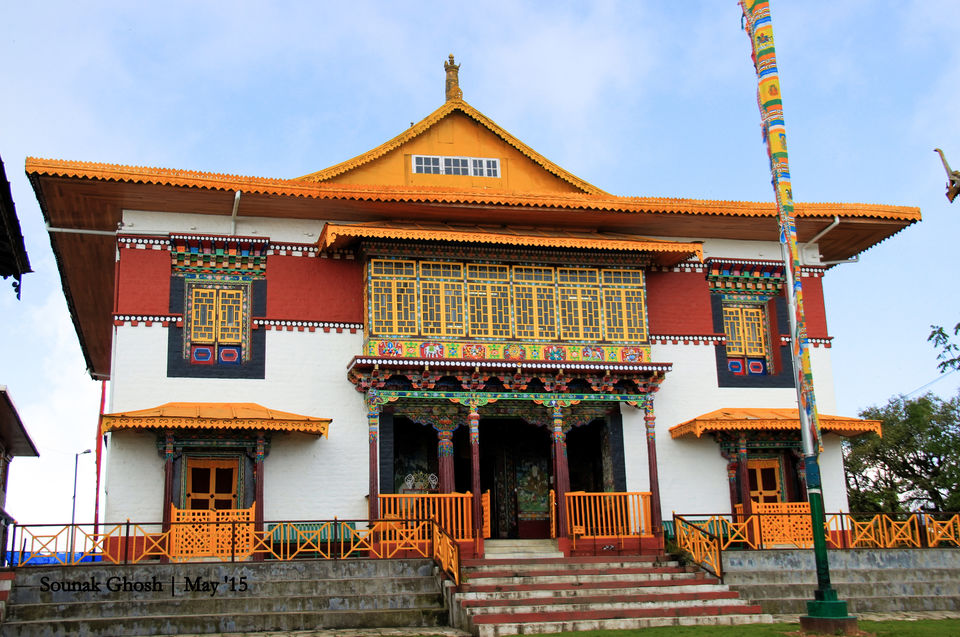 A monk at Pemayangtse Monastery. 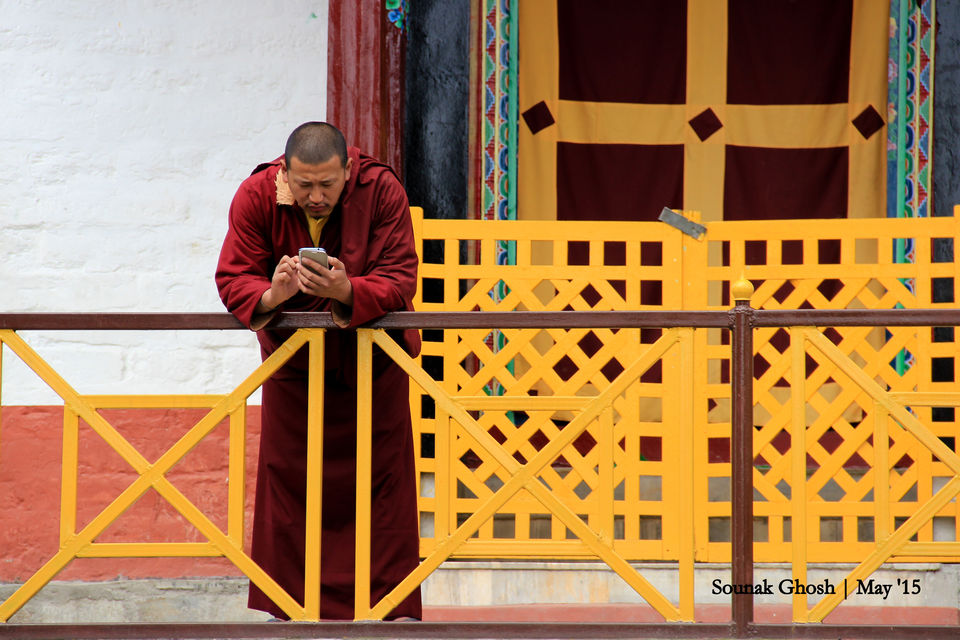 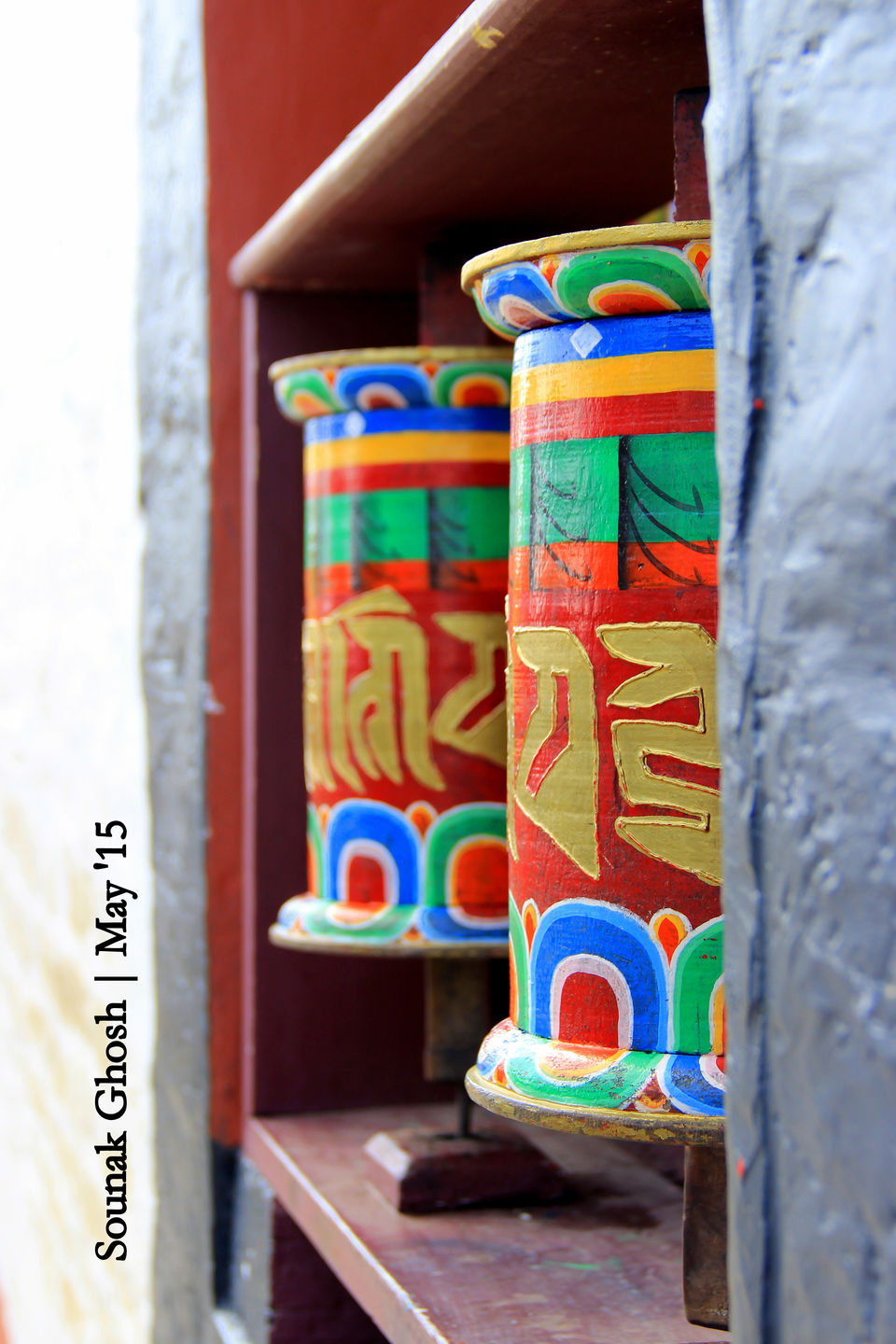 Day 3: Enchey to Rumtek and back.

Day 4: Phodong and back.

Day 6: Pelling to Tashiding to Pemayangtse and back to Pelling.

Day 7: Pelling to NJP/Bagdogra or Darjeeling/Kalimpong.

Bomdila Monastery, Bomdila: The Bomdila Gompa or monastery is one of the most prominent centres of the Lamaistic faith of Mahayana Buddhism. A replica of the Tsona Gontse monastery at Tsona in the southern Tibet, the Bomdila monastery(also known as the Gentse Gaden Rabgyel Lling monastery) was set up by the twelfth reincarnate of the Tsona Gontse Rinpoche. The reincarnate who was born in Morshing, west Kameng, had established this monastery in the year 1965 before his death in 1966. However, the Rinpoche, the thirteenth reincarnation, Tsona Gontse Rinpoche renovated and enlarged the monastery by including a huge main prayer hall, which was further blessed by His Highness the 14th Holi Dalai Lama in 1997.

The main festivals being celebrated in Bomdila Monastery are Losar and Saka Dawa. Losar is celebrated to mark the beginning of the New Year according to the Monapa calendar. This festival goes on for 15 days, in which prayers are offered along with hoisting of the prayer flags. Saka Dawa is held on the fourth month of the lunar calendar, marks the day of the Buddha's enlightenment.

Bomdila is accessible by road from Tezpur situated 160 km away. 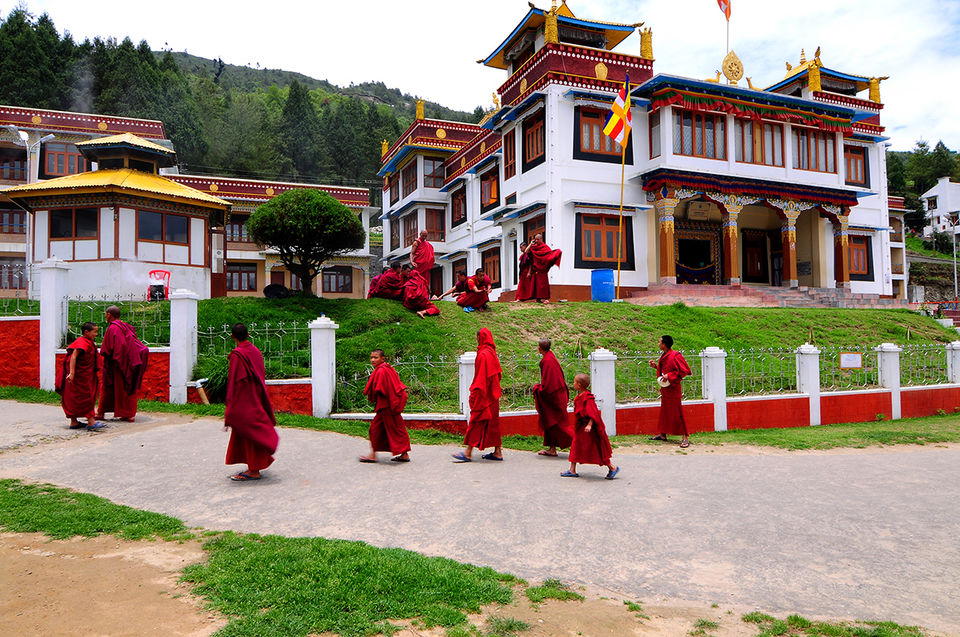 Tawang Monastery is known in Tibetan as Galden Namgey Lhatse, which translates to "celestial paradise in a clear night." It was founded by Merak Lama Lodre Gyatso in 1680-1681 in accordance with the wishes of the 5th Dalai Lama, Ngawang Lobsang Gyatso. It belongs to the Gelug school of Mahayana Buddhism and had a religious association with Drepung Monastery of Lhasa, which continued during the period of British rule.

More information about Tawang Monastery can be found here. 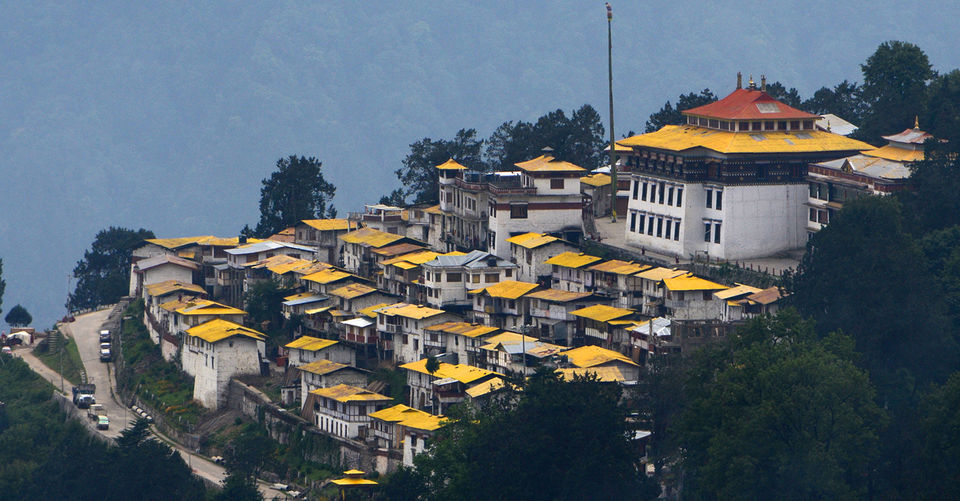 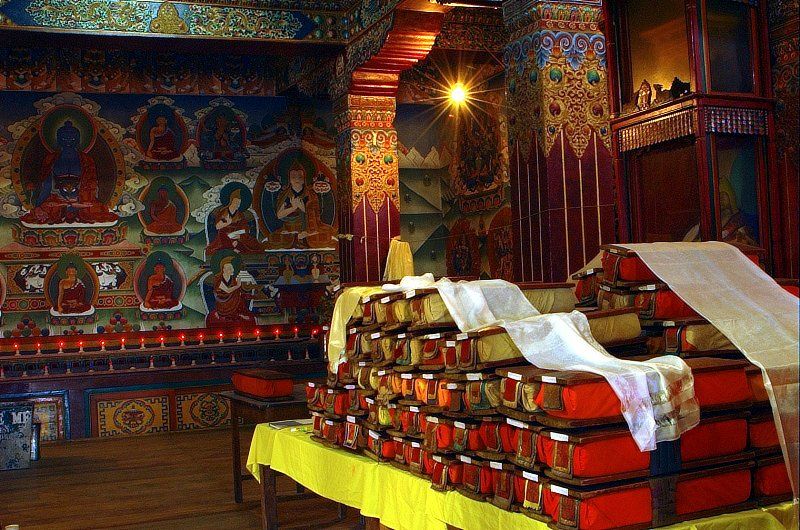 There are many more monasteries in these three states which are equally revered and are as beautiful, peaceful and venerated. The above mentioned monasteries are the most sought after tourist destinations and are easily reachable.

Note: Two more places where one can learn and gather information Buddhist and Tibetan culture, heritage, religious beliefs and handicrafts are the Tibetan Self Help Center in Darjeeling and The Namgyal Institute of Tibetology in Gangtok. 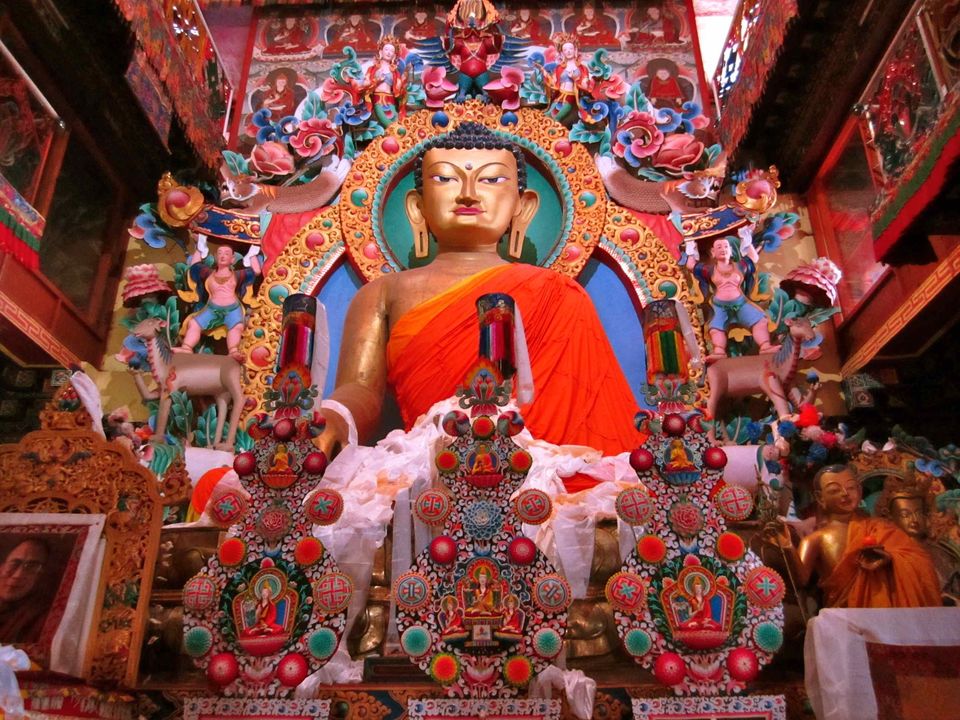