Ireland- A gift wrap of Adventures

By Clayton and Jessica

Getting Spooked at Loftus Hall: The Most Haunted House in Ireland Loftus Hall has a history that is shrouded in mystery and evil, and it rightfully holds the title as being the most haunted house in all of Ireland. We were given the chance to tour this historic house turned tourist attraction when we were in county Wexford with Fáilte Ireland Located on the barren and lonely hook head peninsula it is the perfect location for the dark and disturbing story that Loftus Hall has to tell. The day we visited Loftus hall couldn’t have been much spookier. Situated just back from cliffs that drop to the sea, the water angrily lashed up with a cold mist and a light fog that made the atmosphere more than just a little eerie. The house stands alone making the ideas of murder, mystery, and ghosts a little too believable. Your ticket into the house is a playing card, with everyone on in your group having a different card. Almost like you are getting marked for something… If these walls could talk I am sure we could hear many historic tales and maybe a few disturbing ones as well. Loftus Hall was built on top of the remains of Redmond lodge built in the 12th century. In its time the house has been a convent,hotel, and private residence. It was privately owned and lived in until 2008 when it was mysteriously abandoned, suddenly in the middle of the night. Not being one who gets spooked easily at these kind of attractions, and coming from America who does Halloween and Haunted so well I was skeptical going in, and not really expecting a fright. But one thing I didn’t count on was it having such an authentic location and eerie landscape, and Loftus Hall has those in spades. It is a peculiar and unsettling house to say the least, I can’t for sure say that it is haunted… that my friend is something you will have to find out for yourself. 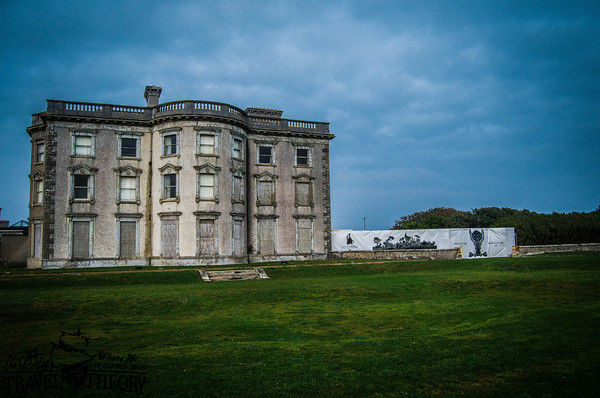 Sea Kayaking in Clew Bay, Ireland The sun was shining and the sky was blue, which had us questioning if we were still in Ireland as we kayaked around Clew Bay, and took in the serene landscape. Surrounded by lush green islands we had a calm and clear liquid highway to paddle on and explore the area. After leaving the Isle of Inishturk, we stayed in Westport for a few days, and while there we were able to go sea kayaking in Clew Bay. Clew bay is a natural ocean bay located in county Mayo. It is made up of a couple hundred islands and is ruled over by Croagh Patrick, Ireland’s holy mountain. Clew bay was the perfect choice for kayaking with our friends at Adventure Islands. We started the day at Rosmoney Pier where we met the rest of our group, and instructors for the day. We were outfitted and instructed before sliding into our kayaks and turned loose on the bay. We were using sit-in kayaks which were totally new to Clayton and I, but I thought with our previous experience using sit on top kayaks on numerous occasions that this would be a piece of cake. I was wrong. Apparently Clayton and I both have “high centers of gravity” (is that a fat joke?) which makes us very prone to wobbles in the kayaks and tipping over. Talk about embarrassing, I was in my kayak maybe 2 minutes and less than five feet from the shore when I fell out of my nice dry kayak, into the lovely freezing Atlantic. Sadly out of the five other people who were kayaking with us, we were the only two that went “swimming” that day. The landscape really was breathtaking. From the azure blue sky bringing us rare warm sunshine, to the dark blues and greens of the sparkling water where the seaweed reached up from the depths, doing its best to slow down our gliding kayaks. The plentiful islands we navigated around each offered a varied landscape from bountiful yellow flowers to fluffy white sheep. I even saw a sheepdog driving a speed boat!…or at least helping. We had an enjoyable and beautiful day kayaking around Clew Bay. Thanks to our instructors Gemma, Paddy, and Richard who kept us safe, made us laugh, and kept everyone else dry. 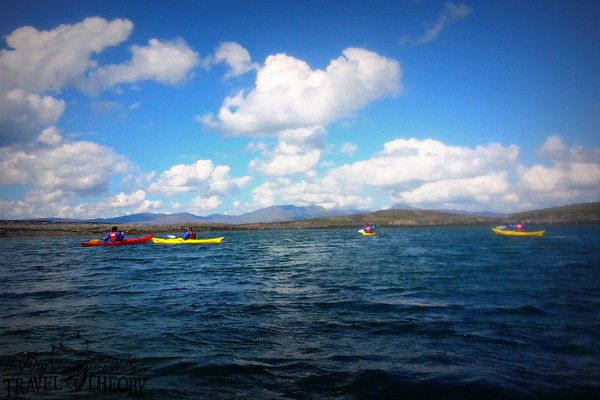 The day I didn’t die hitchhiking in Ireland It was dark and stormy afternoon as we huddled on the side of a narrow country road tentatively extending our thumbs, hoping that it would be safer to ride with a stranger then to brave the unpredictable weather. After what seemed like hours a black van pulls sharply over to the side. A pit starts to form in my stomach wondering if this was a bad idea, as we climbed into the back of the van… Okay so my first hitchhiking experience didn’t go anything like that, the above experience and the actual experience are as different as night and day, literally. The scary story was at night and the real story happened during the day. On one of the most beautiful days we have experienced in Ireland. It was sunny and warm with a beautiful blue sky, and a gentle breeze. We were staying in Westport and wanted to go to Murrisk to see the Friary and the famine memorial ship. After talking to several locals, most of them suggested hitchhiking since it wasn’t very far and taxis and buses would cost too much. I was a little apprehensive about hitchhiking, mostly because of all the scary movies and books about hitchhikers being murdered or thereabouts. I knew Clayton had been hitchhiking in Ireland before, and with all the locals suggesting it, it seemed very common. So in the end the thrill seeker side of me won out and we decided to give it a shot. We started walking towards Murrisk with our thumbs out, and when we had walked about half way a car pulled over. My heart started thumping just a little faster as we leaned in the passenger window to talk to the driver, who happened to be a lovely middle aged lady. She told us she was headed to Murrisk so we climbed in. After exchanging names, she asked what we wanted to do in Murrisk, and then proceeded to give us advice on where we should go and the best way to get there, as well as give us some more ideas on what to do. She was so kind and friendly and I was just so glad that I didn’t end up as a skin suit on my first hitchhiking attempt. While I was doing a little research I found this website of hitchhiking tips with some very useful info, like which countries allow hitchiking, where its common, or easy to get a ride. Check it out if you have plans to do any hitching anytime soon. I think the biggest tip I could give to anyone is that if a car stops and you feel uncomfortable in anyway, don’t get in the car. All in all I had a great experience hitchhiking in Ireland, and it was nice to give our feet a rest. Would you ever hitchhike? 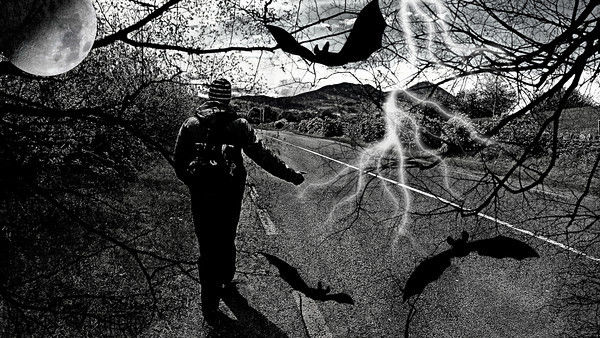 Hurling in Ireland Is that a band of rugged Celtic warriors screaming death cries as they charge at full speed down the battlefield wielding battle clubs? Nope, it’s the game called Hurling and it’s one of Ireland’s national sports. They act like warriors by defending their county or club’s pride and taking on all opponents. One of the fastest sports in the world, there’s lots of action to see at any moment of the game. Jessica and I were lucky enough to get the chance to learn how to play Hurling in Kilkenny. We went with a group to the field and started by learning about the Hurley stick. They’re only made of Ash and from the base of the tree. We started off by learning how to use the Hurley stick and the basic rules of the game. The rules are similar to field hockey, but scoring is a bit different. There is a bar between two poles. Over the bar is one point and under it is three. Luckily, we had plenty of time to get the hang of the game. We had a fun little competition trying to score on our host for the chance to win a free drink. The cool thing is that none of the players get paid. Not like in the NFL or MLB. The clubs normally make enough money on advertising to pay for their expenses and maybe just a bit more. That means that all these guys have a day job and do this on the side. That’s pretty crazy when you find out they might practice 15-20 hours a week during the season along with their normal job, family life, and everything else. They’re just playing for pride and glory and bragging rights all around the country. You always end up hungry after practice and so we headed over to Lanigan’s bar for some Irish stew and the winner got to pour themselves a free pint of Guinness. This is part of the Kilkenny Way Experience where you learn how to play Hurling and get a meal and drink at the pub in town. 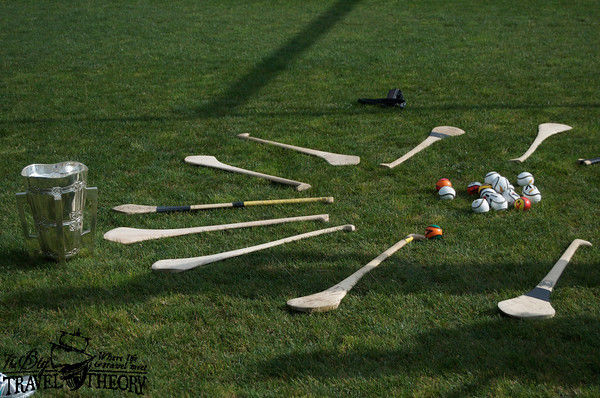