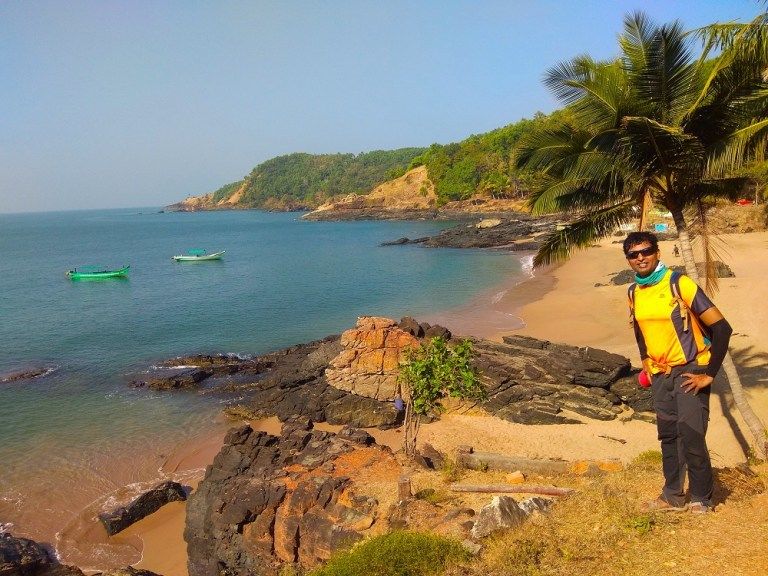 The trek from Kumta to Gokarna beach is a 20 km long hike between two towns in the Uttara Kannada district – with the same names – Kumta and Gokarna. This trek starts from Kumta beach and goes all the way up to Gokarna or the other way round. But most trekkers prefer starting from Kumta. Unlike other treks which take you over mountains and hills, this trek is mostly along the coast line and you walk across ten beaches en-route. These beaches are geographically only a couple of kilometres away from each other and are separated by tiny hillocks across the coastline. All of them seem more beautiful and unique than the one before. Though this trek in some parts takes you over hilly terrain and a ferry ride this is primarily a trek along the coast line and treats you to some of the most beautiful and cleanest beaches in India.

Start of the trek: Reach Kumta railway station and walk couple of kilometers till the Kumta bus stand. (If you are traveling from Mumbai catch the Mangalore Superfast Express for an overnight journey. Hire an auto from the bus stand to the Kumta beach. The road to the beach passes through scenic paddy fields, waterways and creeks. 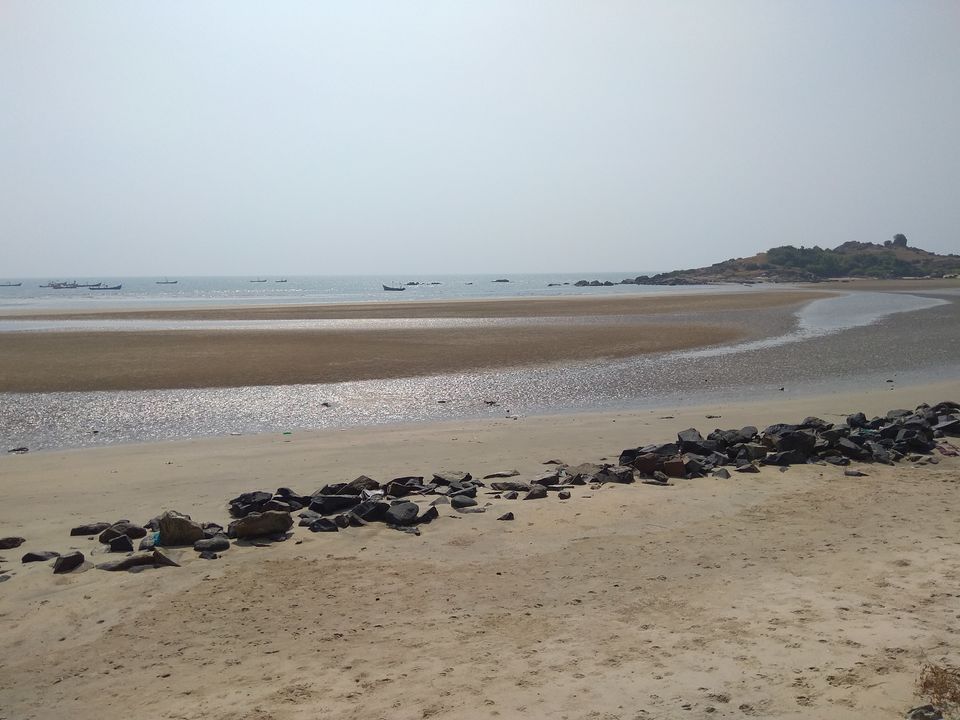 Once you reach the beach there is a road on the right parallel to the coastline. 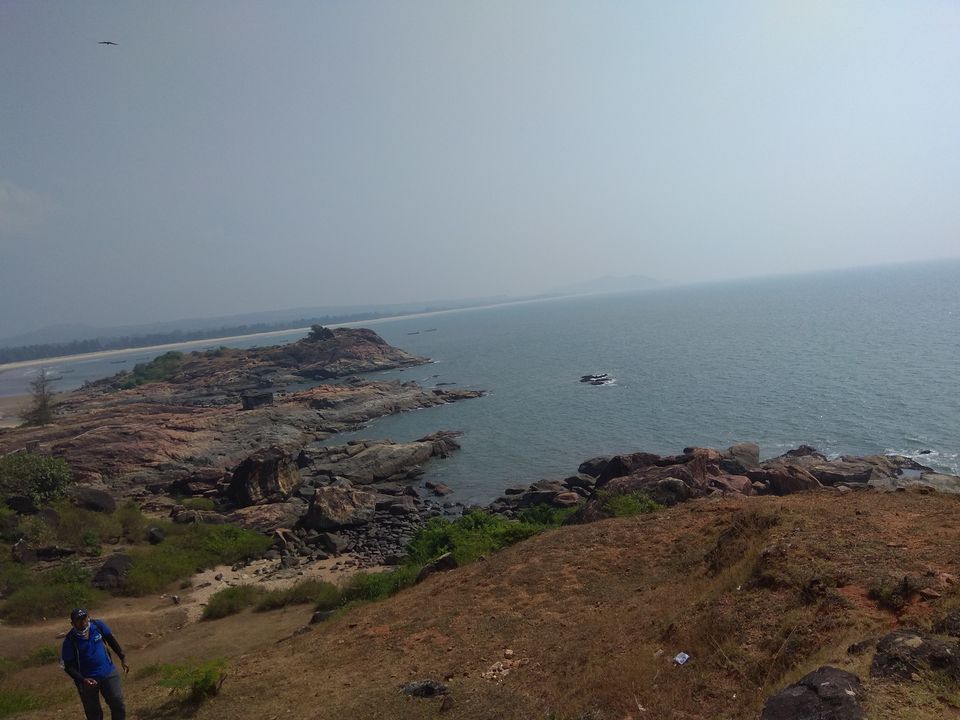 A stroll along the coastline or on the road for 10 minutes will take you to the top of a rocky headland on the shore. There are benches laid all over and you can sit here and watch the piercing waves rising over the hilly terrain. Enjoy the spectacular views of Arabian Sea and lookout for a light house in the distance.

Proceed further down the hill towards north taking the cement road which leads to fishermen’s hamlet with boats docked along side. 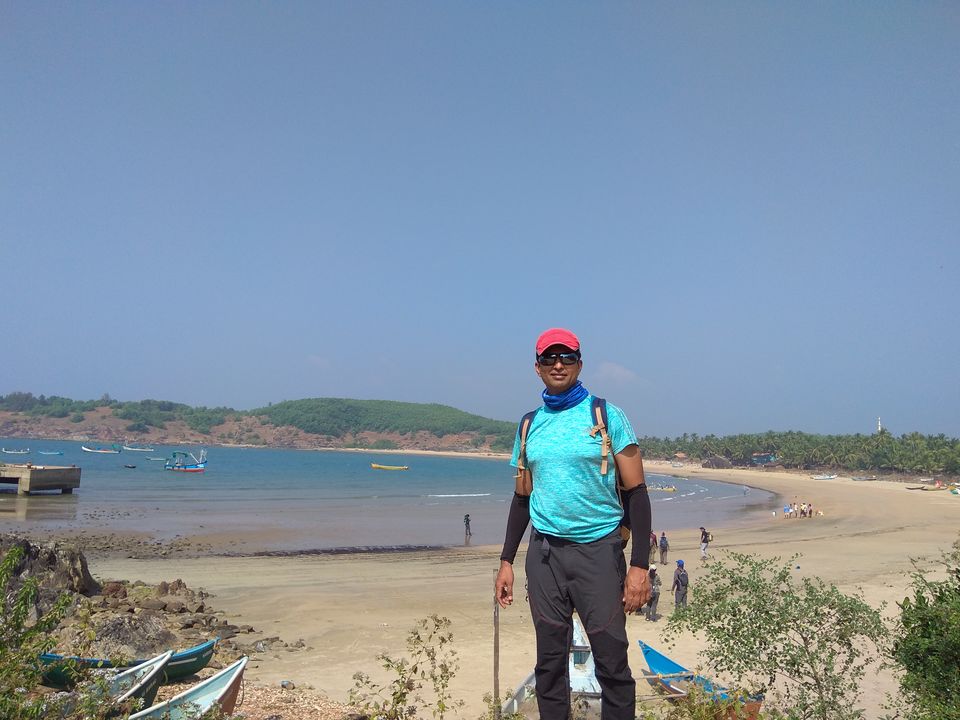 Within 15 minutes you will reach at Vannalli beach. This beach is around 3 km long and you will enjoy walking on this stretch as the sand here is very soft. This is one of the best beaches you will encounter and you can click some great pictures here.

As the beach ends you will see a small hill (notice he hill in the above pic). To go on this hill you have to climb an easy slope which will lead you to a beautiful grassland. You can halt here on the cliff for lunch and eat your packed meal enjoying the panoramic surroundings. 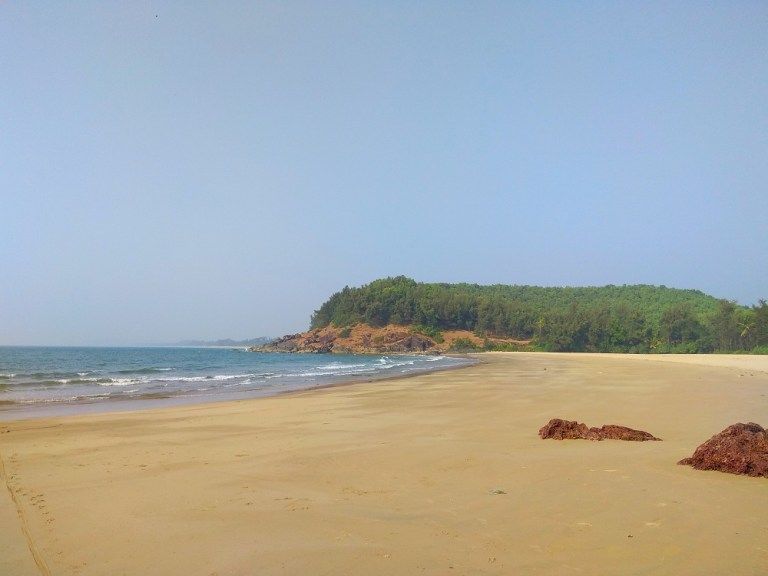 Move ahead and descend down the cliff and within 15-20 minutes you will be at Mangodlu beach. This is a small beach, compared to Vannalli beach and before you reach you will have to cover a small stretch of rocky portion on the coast.

This is a remote beach and you will hardly find anyone here. Great place for a swim or some playful activities.

At the end of this beach is a hillock which you need to traverse to get access to the beautiful Kadle beach.

To the north of Kadle beach is Nirvana beach and the total length of this beach stretch is around 8 km. Enjoy walking at leisure on this entire coast line playfully walking in the waters of the ocean tide. Remove your footwear and walk bare foot on this stretch. Feel the sand slipping below your feet as the waves recede back in the ocean.

If you don’t want to walk on this long stretch as after some time the walk may seem monotonous. There is option here – midway you may connect to the road parallel to this beach and catch a bus to Aghanashini Jetty.

Else you may keep walking and reach the end of Nirvana beach, which is usually crowded as many people visit this beach from all the country. At the end Nirvana beach, walk through the Kagal Fort on the Nirvana cliff and the next beach on the trail you will see is Heaven beach.

Sunset over the Aghnashini river jetty 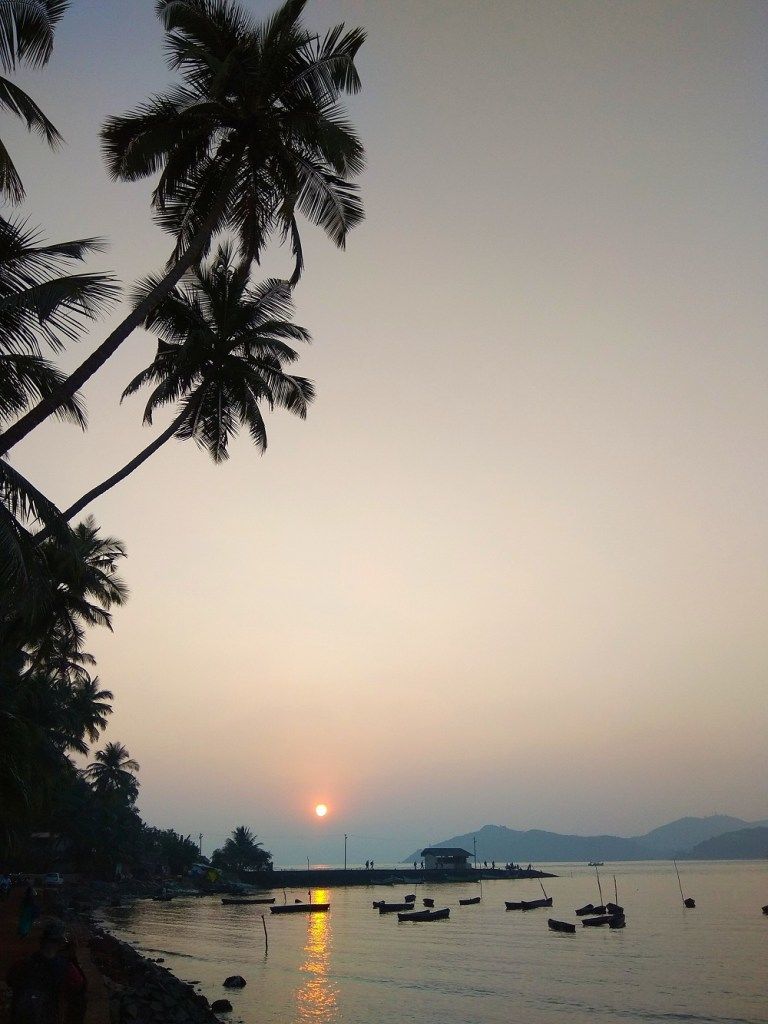 You have to walk across this beach to reach on the banks of the Aghanashini river and proceed towards the jetty.

Catch a ferry from the jetty to reach Belekan beach on the other side of the river This river can only be crossed by a ferry and if you have a vehicle it also can be ferried along. The last ferry is at 6 pm so ensure you reach well before time else you may have to take a private ferry which can be costlier. Hence some people prefer catching the bus before Nirvana beach. 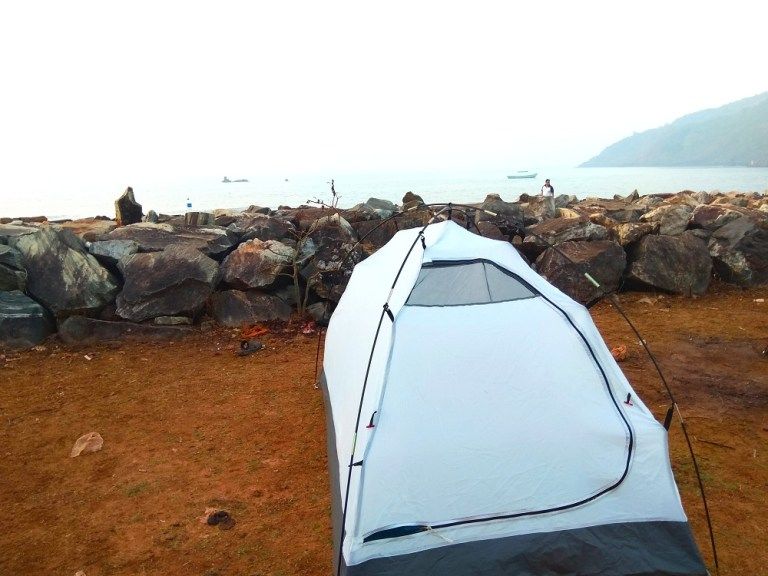 Find the best spot at Belekan beach and pitch your tents. The sounds of waves crashing on the rocks will be music to your ears and as you retire for the night after dinner you will see that the sky above will be lit by thousands of stars.

Nothing much to see at Belekan beach after sundown as it is a small area at the edge of the village. But you will wake up to a beautiful morning with palm trees swaying gently.

View from Belekan Hillock above the temple 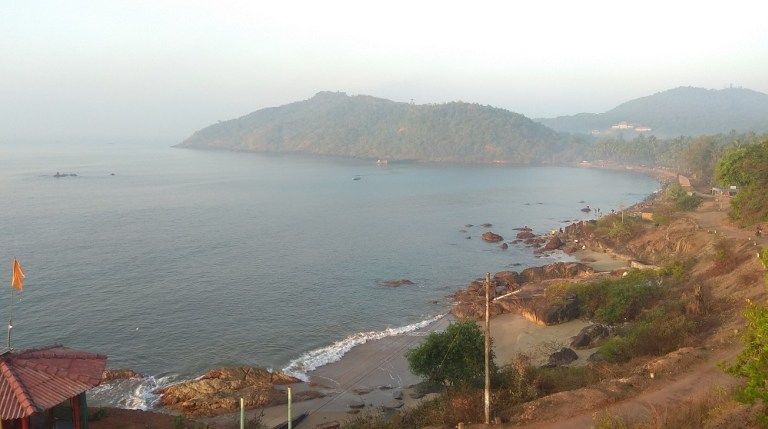 Walk up to the Belekan hillock near the bantkal beera devi temple to watch the sunrise.

The view from here is stunning as the morning sun rays paint the sky in hues seldom seen elsewhere in the country, Watch the sun rays reflecting on the waves as it rises above the horizon.

Today will be the second and final day of the trek. As you start the trek, you will walk along the beach till you enter a forest area. 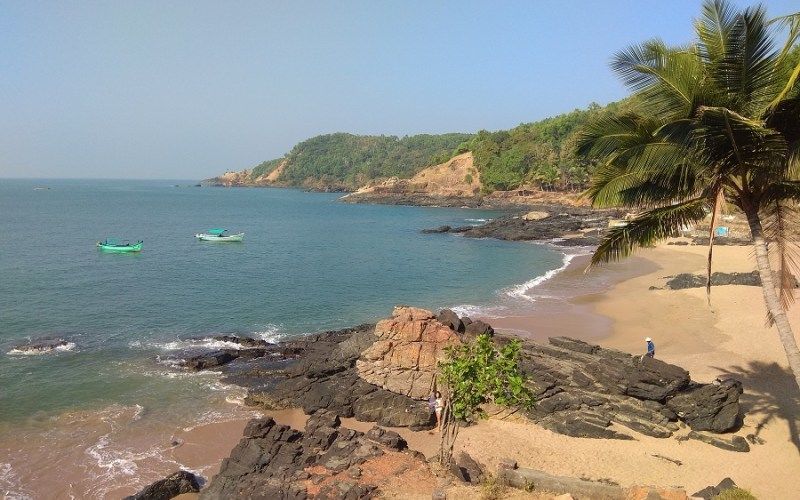 Follow the lush green area and within 30 minutes you will find yourself descending on Paradise beach. Paradise beach can only reached by boat/catamaran or by foot.

As the name suggests it is a small piece of paradise inhabited by very adventurous tourists (mostly foreigners) who have managed to reach here on their own. You will find them chilling out and relishing this small haven. 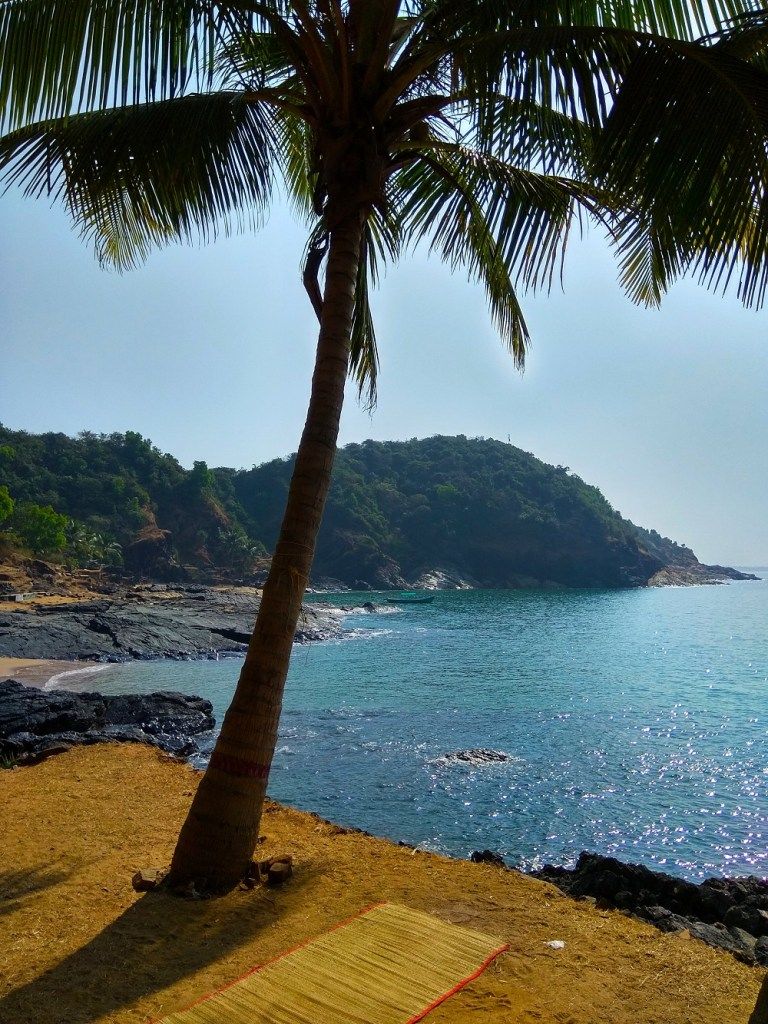 A walk of 15 minutes from paradise beach will lead you to popular vantage point known as small shell beach.

A few coconut trees jutting from a hillock is a popular vantage point on this beach. The turquoise blue sea and the dark green hills make the landscape a photographer’s and a nature’s delight.

A long stretch of sand takes you over hills with the expansive Arabian Sea for accompaniment.

The vistas are breathtaking all the way and you will countless opportunities to click landscape photographs here.

Small Shack near Half Moon beach 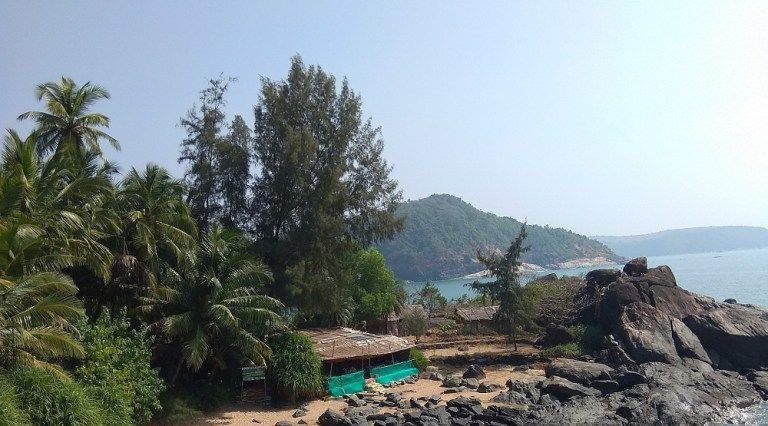 After about an hour you will come to a small shack hidden between rocks which will lead you to Half Moon beach.

There is another shack next to it which is know as Half Moon Restaurant and you can get juices or drinks to rejuvenate yourself. You dont get food here only snacks or refreshments are available here. 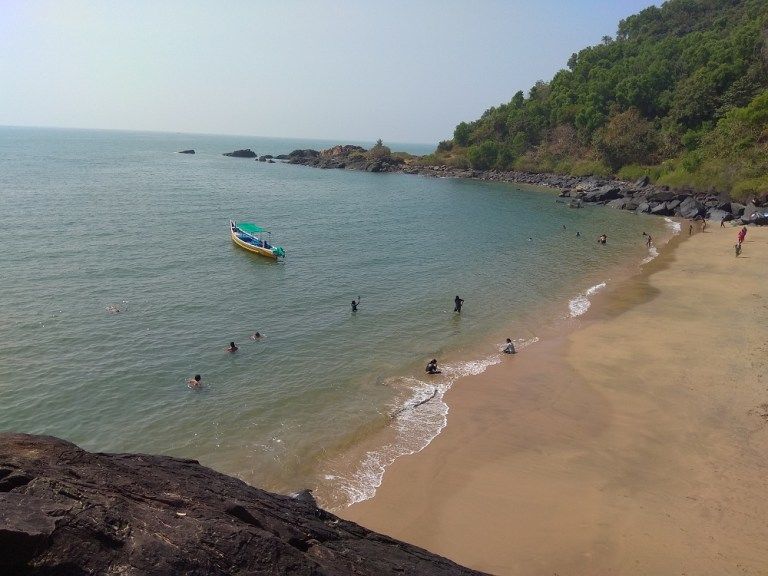 This is the half moon beach visible from the hillock opposite the restaurant. 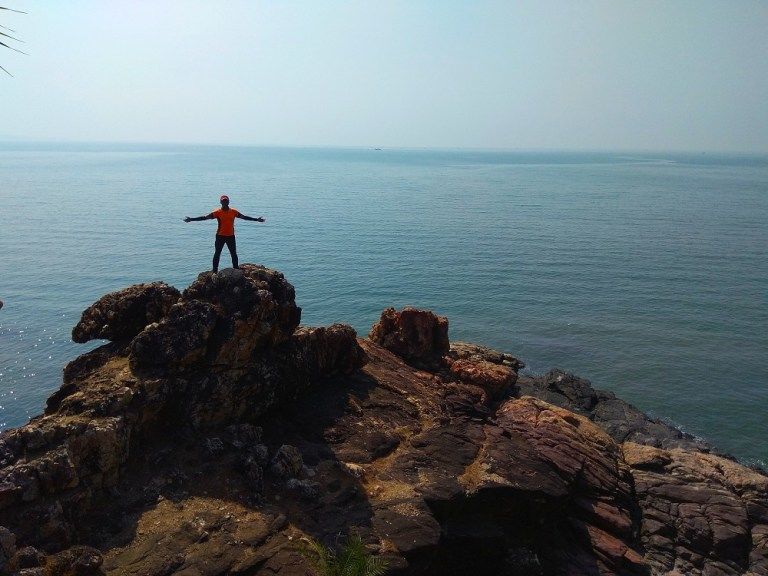 From here is along walk to Om beach, so make sure you are fully refreshed. Keep walking on the trail running parallel to the coastline watching the waves hitting hillocks perpetually and eventually you will reach the entry point of Om beach. 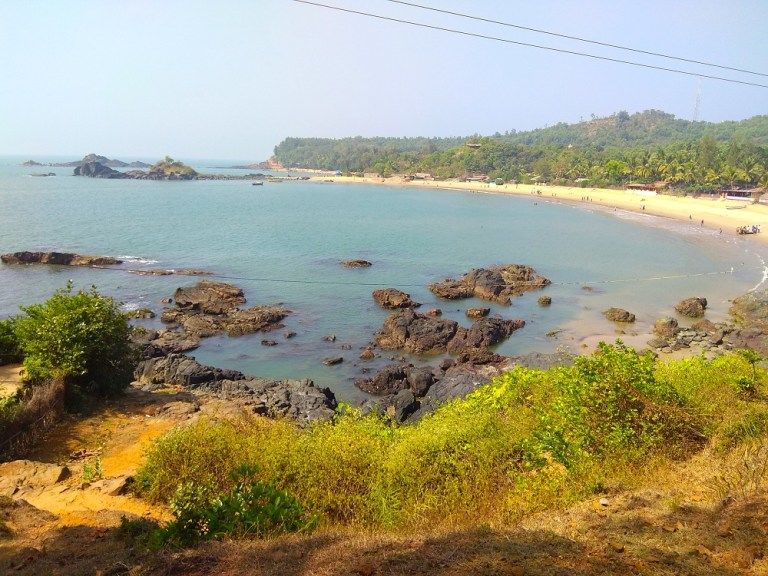 Om beach is very popular with local tourist and foreigners alike and on weekend you will have people coming here in good numbers. The sad part though about this beach because it is popular, lots of youngster carry carry liquor get intoxicated and create noise and also rubbish around.

There are numerous cafes on this long stretch of sandy beach and you can have you lunch here in one of the cafes.

The last leg of the trek starts from you here as you start towards Kudle beach. Climb up stairs from the exit point of Kudle beach and you will come to the parking lot. From a small garden, a clean tar road leads you towards Gokarna cliff. 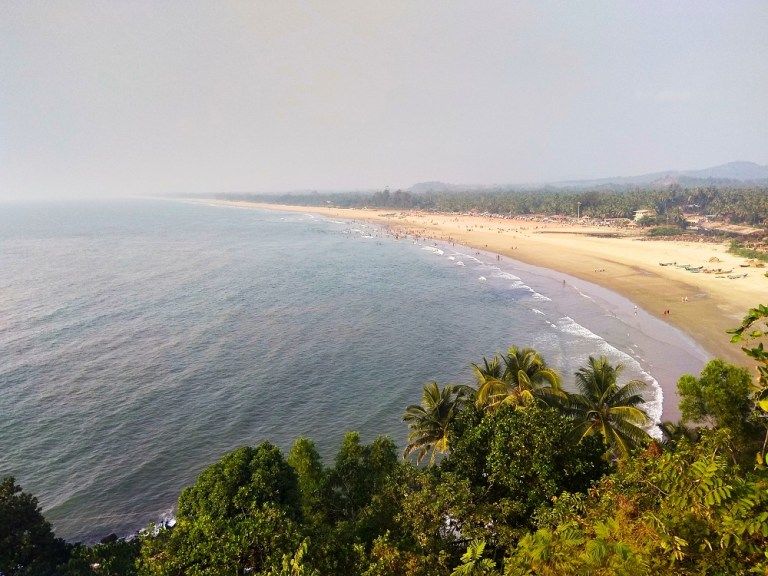 From the cliff Gokarna beach is clearly visible. Descend towards the temple from here and walk to Gokarna beach. This marks the end of beach adventure over two days. Treat yourself with some local cuisine or snacks at the beach and enjoy your accomplishment.

To know more of my treks visit TrekwithNazir