Living in the hustling vicinity of Mumbai, the city that never sleeps, the constant traffic jams and the monotonous college life I often found myself daydreaming about valleys and beautiful landscapes, hills and treks every day.

Travelling all the way to North, to the majestic Himalayas seemed almost impossible for a broke college student with no time. Living in Mumbai for almost two years now, I had been to endless beaches in the vicinity but the heart wants what it wants. And mine wanted the hills. Lucky for me, a friend suggested a place called Harishchandragarh.

A hill fort in the Ahmednagar district of Maharashtra, Harishchandragarh is a heritage place with origins from the 6th Century. It is known to be one of the most challenging treks in the Western Ghats.

As opposed to whatever the existing travel blogs say about the best time for the trek, I think it would be heavenly if you go for it in the monsoons . It sure can be a little tricky and you'll have to be extra cautious as the rocks become slippery due to the rain. But it's all about the experience, right?

The picture of Harishchandragarh in my head was entirely different from what it really turned out to be. Honestly, I didn't expect to find such scenic brilliance in a small town of Maharashtra.

Harishchandragad lies where the boundaries of Thane, Pune and Ahmednagar districts converge. It is approximately 200 kms (4 hour drive) from Mumbai, 150 kms from Pune. The trek can also be approached through multiple routes. One such route is via Nalichi Vaat (which translates to 'passage through a gorge') which is a channel that lies to the extreme right of the mountain. It is said to be one of the difficult climbs. Nalichi Vaat involves a near 80 degree climb.

I started the trek from Khireshwar village. It was drizzling throughout the journey to the village and the moment I saw the backwater around the dam, I knew what love at first sight meant. 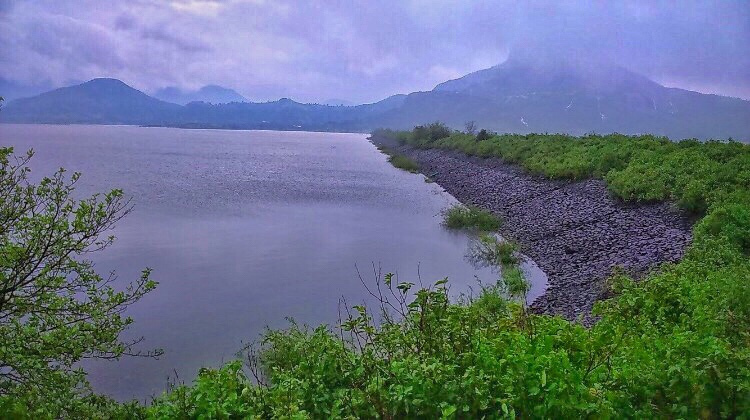 Cosied up in my raincoat I started the trek at 9am in the morning, it was already drizzling and the path uphill was not defined or marked as such, especially for the initial 2-4 kms and that was the most exciting part of the trek for me, to figure out the way. Which path to take? Robert Frost was constantly echoing in my head, which road to take, the one less travelled by?

I'm so dependent on google maps that my direction sense is totally screwed and I think most of you would relate to it. Technology has spoiled us. On my way uphill, I saw countless waterfalls. COUNTLESS! Some, I climbed up through, some I crossed and some, I passed right by. 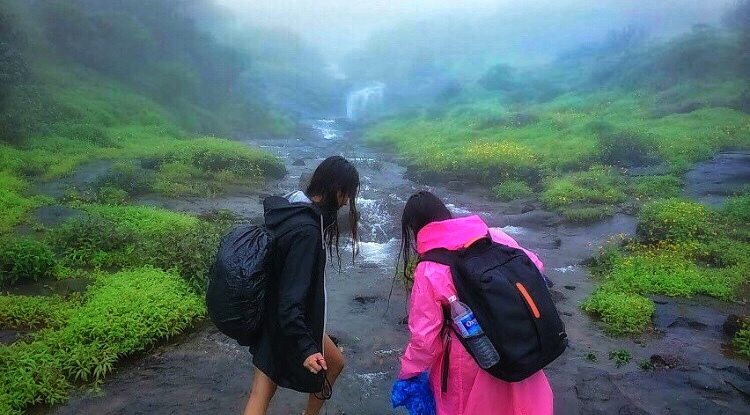 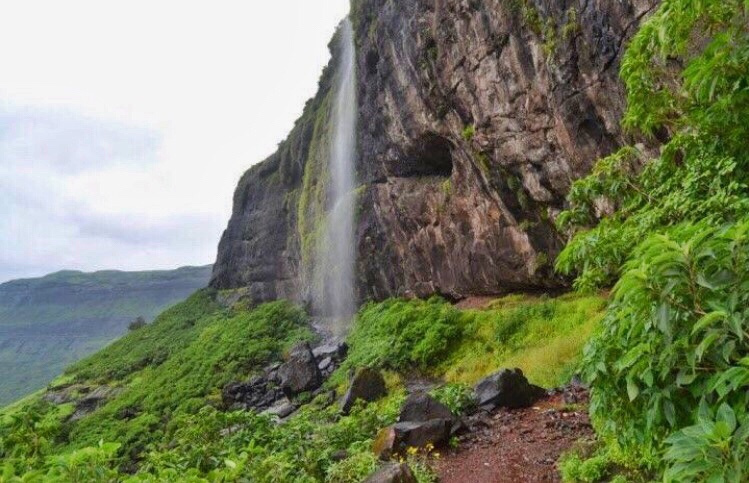 After about 6 hours of hiking, I finally made it to the top of the hill , it hadn't stopped raining all this while, and even my dear raincoat couldn't save me. I was drenched and so was half of my bag pack due to the two-three times I slipped. No gain without pain yo!

For a while, the visibility up hill was very low, all I could see around me were clouds, passing right by me. Fairytale! That's what it felt like. 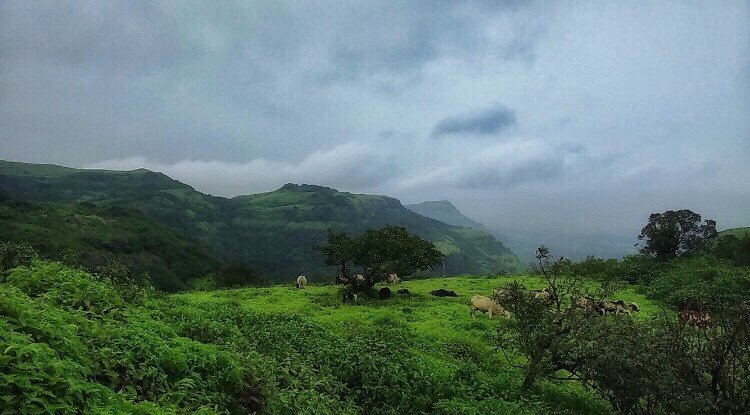 Walking ahead for some 700 meters I saw the much talked about caves. Most of the travelers spend the night camping in these caves. Although I started early at the dawn, the uphill climb is exhausting and takes away the best part of the day's light, making it essentially a two-day trek. I had the option of making the overnight camp on the grassy plains or a shelter in the ancient caves situated around the fort. But I didn't want to risk the night staying outdoors as it hadn't stopped raining.

After settling in the caves I started the trek towards the Konkan cliff. 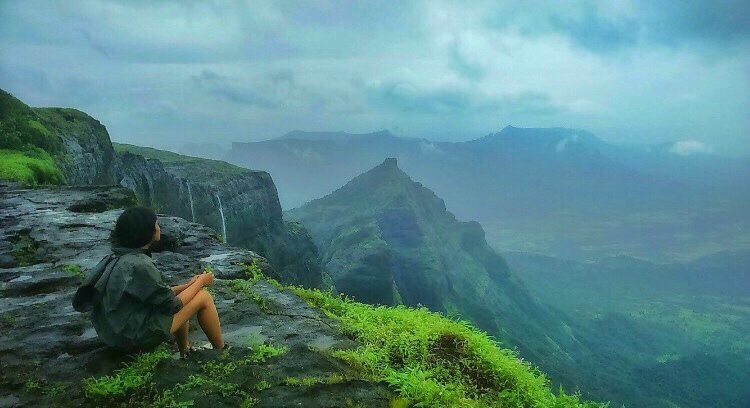 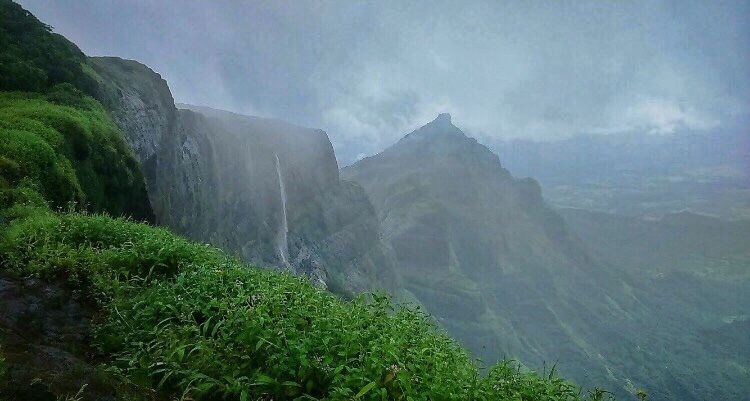 The most exquisite part of the trek remains the Konkan Kada (Konkan cliff), an almost 1423 meter concave fall. This cliff faces west and looks down upon the Konkan. It is a vertical overhang providing a panoramic view of the surrounding hills and a mesmerizing sunset.

Vertical cloud burst can be observed here, in which the clouds nearing the cliff get sucked into the pit fall area below and are thrown vertically into the sky reaching more than 50 feet (15 m), creating the impression of a wall that is rising straight from the edge of the cliff without entering the landmass area.

Some of the trekkers picked up branches and sticks and threw it from the cliff, just to test the vertical cloud burst and the branches really flew up in the air instead of falling down! Surreal. 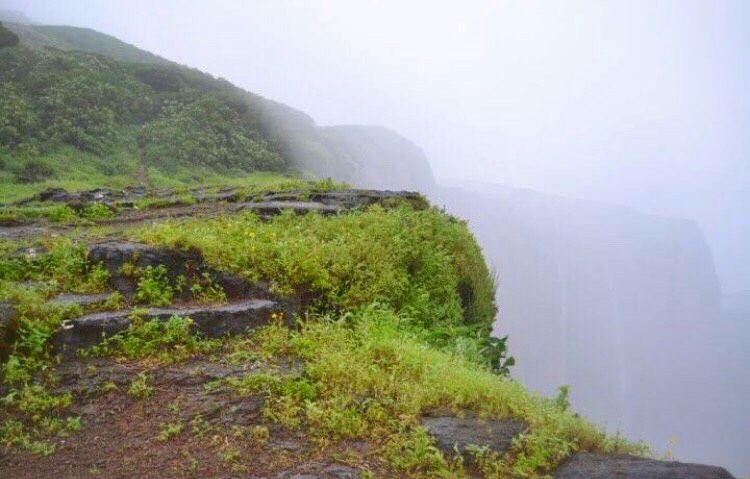 After spending a couple of hours chilling around the cliff, I started my trek back to the cave. Local villagers are often seen in/around the caves and they usually come there with food supplies and water bottles. They have proper arrangements to cook a simple meal up there but you shouldn't rely on them and definitely carry your own supplies.

The next morning, I walked up to the Kedareshwar Cave, in which there is a big Shiva Linga, which is completely surrounded by water. Its height from the base is five feet, and the water is waist-deep.

Historically, there were four pillars built around the Shiva Linga and it is said that the pillars were built to depict the four 'Yugas' of Life - 'Satya Yuga', 'Tretha Yuga', 'Dwapara Yuga' and 'Kali Yuga'. When a Yuga comes to the end of its time, one of the pillars is said to break down. Three of the pillars have already broken down. The general belief is that the current phase is the 'Kali Yuga' and the day the fourth pillar breaks down - it will be looked to as the last day of the current era. 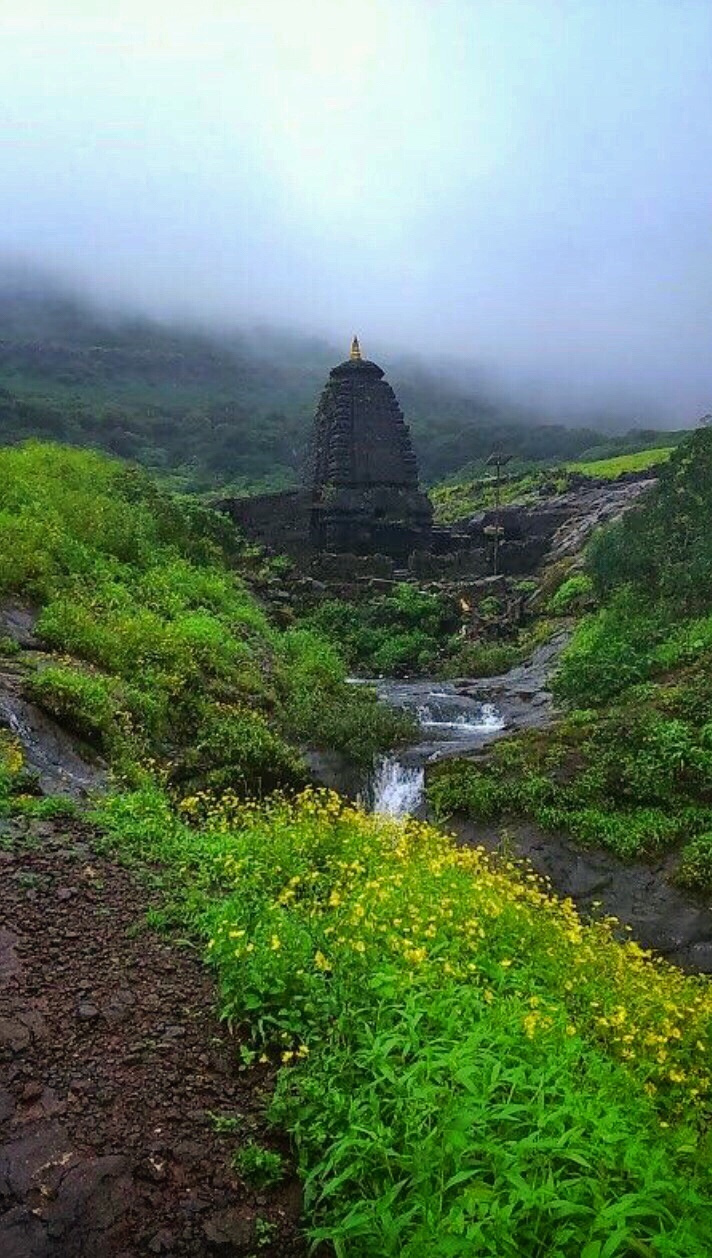 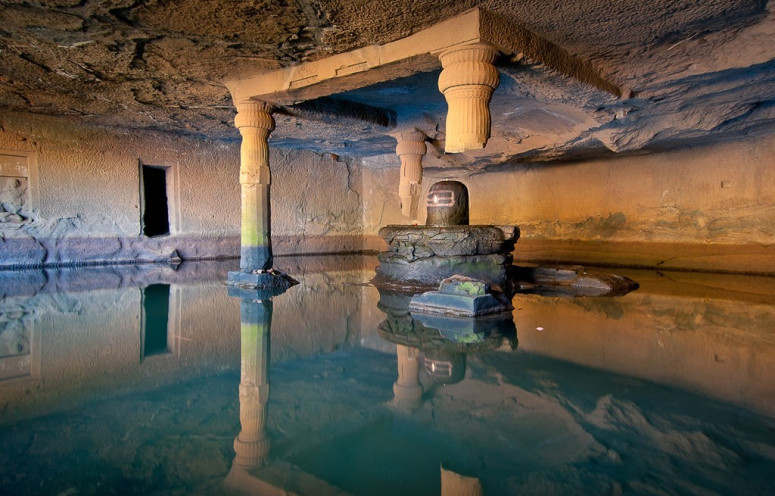 The whole experience of trekking up, without using any cellphones or GPS, staying in the caves adds up so brilliantly that I felt like I'm back in the simpler times when there were no concrete jungles. The 'social media' image of a person didn't matter. When there was no virtual reality. All that there was, was what you saw with your naked eyes...

This blog was originally published on Over Gin & Coffee.