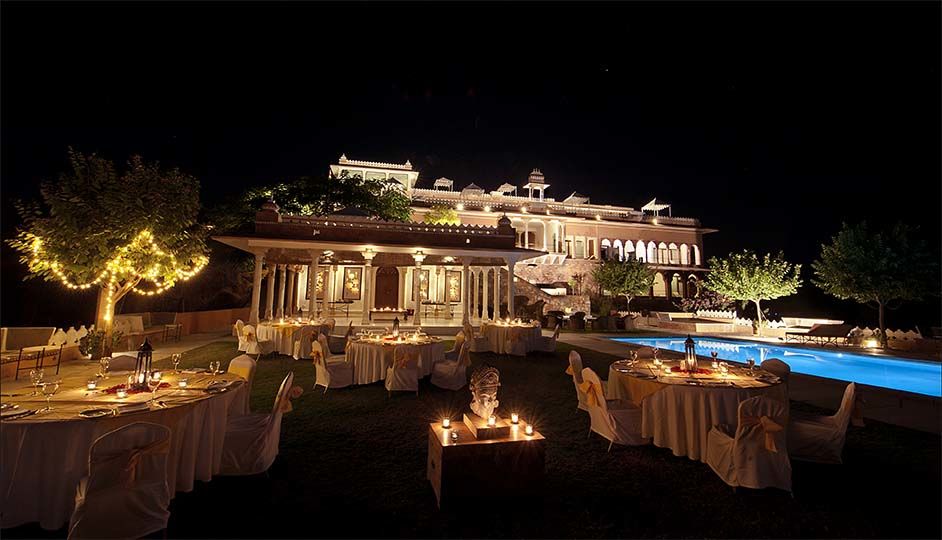 It is said that the more you set into your world, the smaller your world becomes. In the race of running for that perfect college degree followed by the perfect job and that perfect lifestyle, somewhere deep down, we often find comfort in the monotony of our lives.

That's where the beauty of travel steps in. Who doesn't want, every once in a while, to not be content with one's daily life and live the life of a king. And if you're looking to rejuvenate and pamper all your senses at once, we've got the ultimate destination that you should be heading to on your next visit to the city of lakes, Udaipur.

Sitting majestically on the top of a hill a few minutes away from the main city, Fateh Garh is an oasis that serves as the perfect adobe to travellers looking for the ultimate royal experience. The imperial treatment right from the time the gates are opened for you to walk in, the grandeur of the property, the courteous service and the heavenly meal spreads make for a wholesome experience that will make you feel like true royalty. 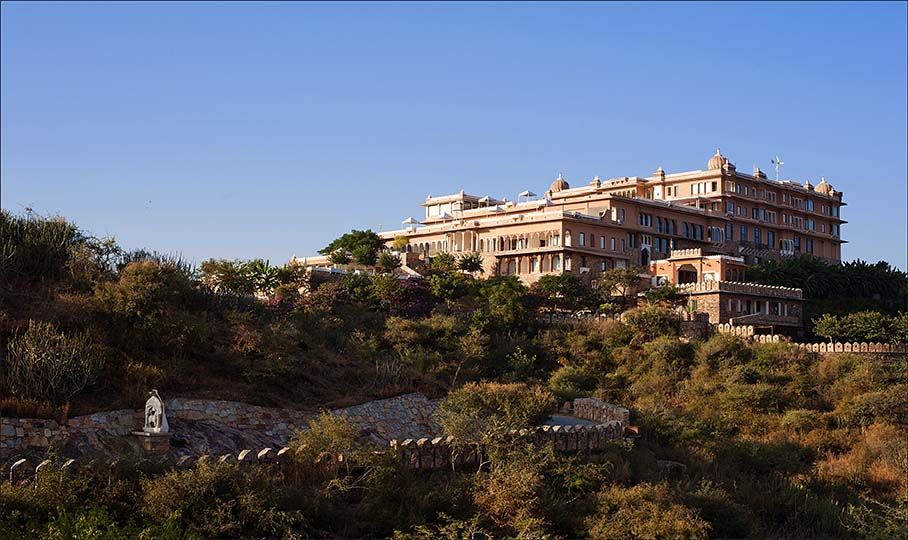 Located about 8kms away from the iconic Lake , Fateh Garh is one of the very few heritage renaissance properties in India—a term used to describe the laborious process of moving a heritage property, brick by brick to a new location and setting up a completely new structure. The Kelwa family, the owners of the luxury hotel who also happen to reside within the majestic property, work extensively towards a holistic and sustainable world. The hotel complex has been built entirely by the local villagers and the Kelwa family continues to employ solely the villagers to run the hotel; all this while not compromising on the luxury even a tad bit. The 48-room property is laden with all modern facilities including an infinity pool worth dying for, spa, Jacuzzi and a super-impressive spa that had us going weak in our knees. The rooms are all designed using natural fabrics, are intricately furnished, extremely spacious and the scintillating views of the city just act as the cherry on top of the cake. 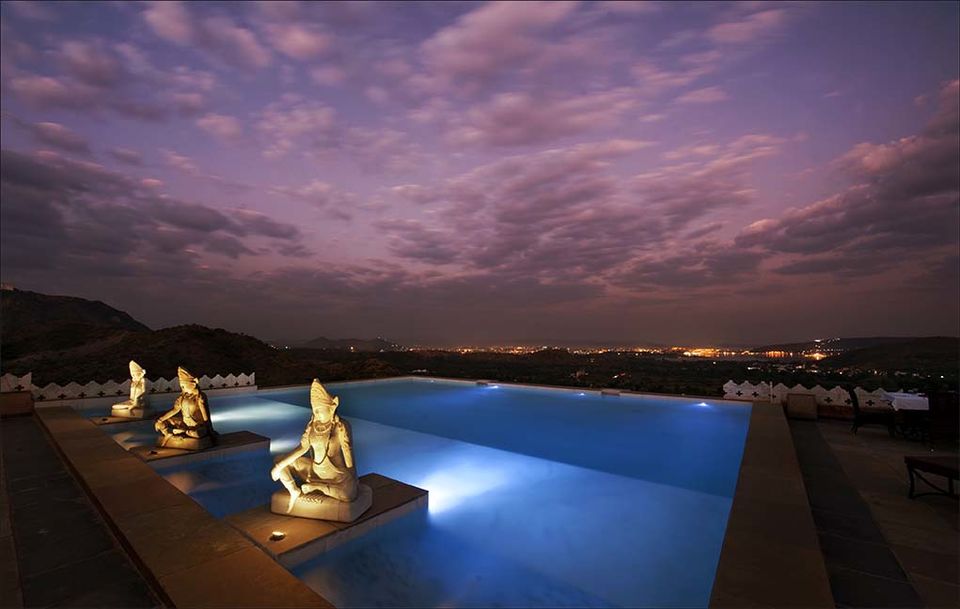 The grandeur of Fateh Garh's interiors (Photo by Fateh Garh) 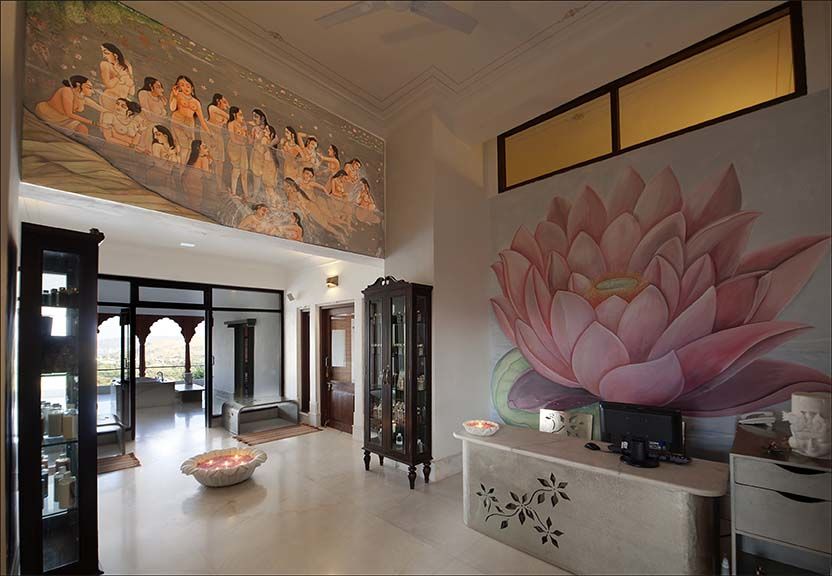 Considering the experience it offers, a stay in Fateh Garh is worth every penny that you spend! A stay in the heritage resort will cost you approximately ₹10,000 per night for one of the 38 Renaissance rooms which also includes a lavish breakfast spread. And if you’re planning to go that extra mile, there are seven Heritage Chambers and three Heritage Suites to choose from as well! 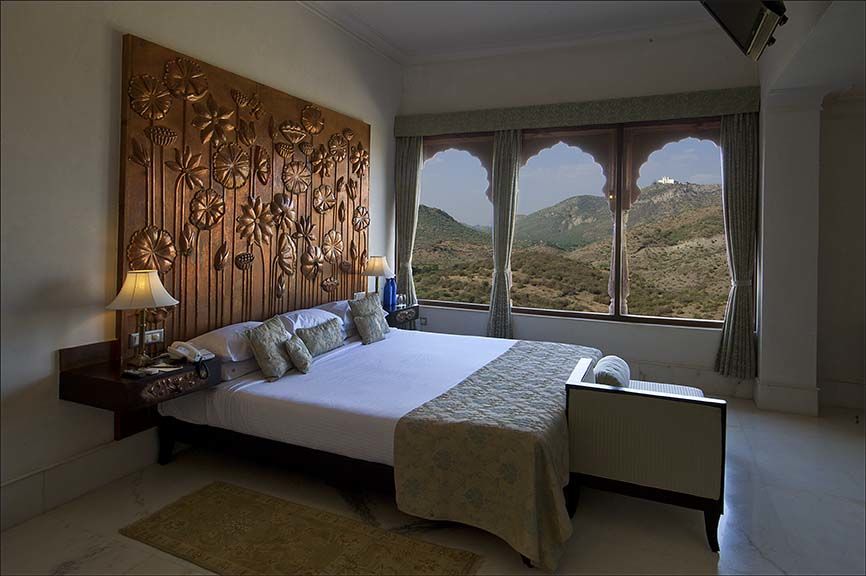 The team at Fateh Garh constantly strives to make your stay as personal as they can and when it comes to the dining experience here at the property, no compromises are made! The chefs ask you for recommendations and requests before the menu for the day is decided. Bliss, isn't it?

You can dig into the most authentic Indian and Rajasthani cuisine at the resort's scenic multi-cuisine terrace restaurants called the Baradari. On the other hand, if you're looking to unwind with friends and family before your meal, head to Amritam, the resort's well-stocked bar.

A view to die for—Baradari (Photo by Fateh Garh) 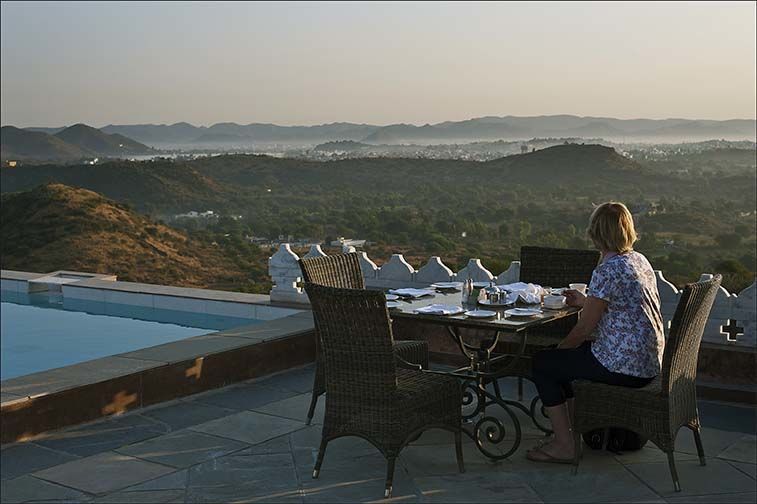 Also, if you're lucky enough, you might be able to catch the mesmerising live demonstration of all the action that goes behind making a Mewari meal. Trust me when I say this, it'll blow your mind away!

The best time to visit and explore the city of Udaipur is in the winters, that is between October to March. The temperatures hover somewhere between 10°C to 25°C which is ideal for you to walk around the lakes, soak in the old world charm of the city, go on a street food trail or just unwind in your hotel room!

The closest metro city to Udaipur is New Delhi and here's how you can make your way to Udaipur from the capital city.

By Air: Udaipur's airport is, Maharana Pratap Airport is approximately 25 kms. away from the min city and a flight from Delhi will get you to the city in 1 Hour 15 Minutes. From the airport, catch a cab to reach Fateh Garh in about an hour.

By Road: Fateh Garh is approximately 670 kms. from New Delhi and will take about 12 hours if you decide to drive down to the resort.

By Train: Though there is no Rajdhani/Shatabdi on the route, an express train will get you to the Udaipur City railway station in about 12 hours after which it'll approximately take you half an hour to reach Fateh Garh.

WHAT TO DO HERE

1. GO FOR A SPIN - All you car lovers, this is when you guys rejoice! Fateh Garh houses one of the best vintage car collections in the country including a MG, Jaguar and Daimler amongst others. Yes, inside the hotel complex!

2. GO EARTHY - Fateh Garh also offers personal guided village tours which can be taken on a jeep or on foot. These tours bring you close to the heartland of the country and opens up a whole new world.

3. RELAX AND REJUVENATE - Too lazy to step out? Head to Sansha, Fateh Garh's massive luxury spa with breathtaking views of the lakes from the massage rooms which are well-equipped with the finest oils from around the world. 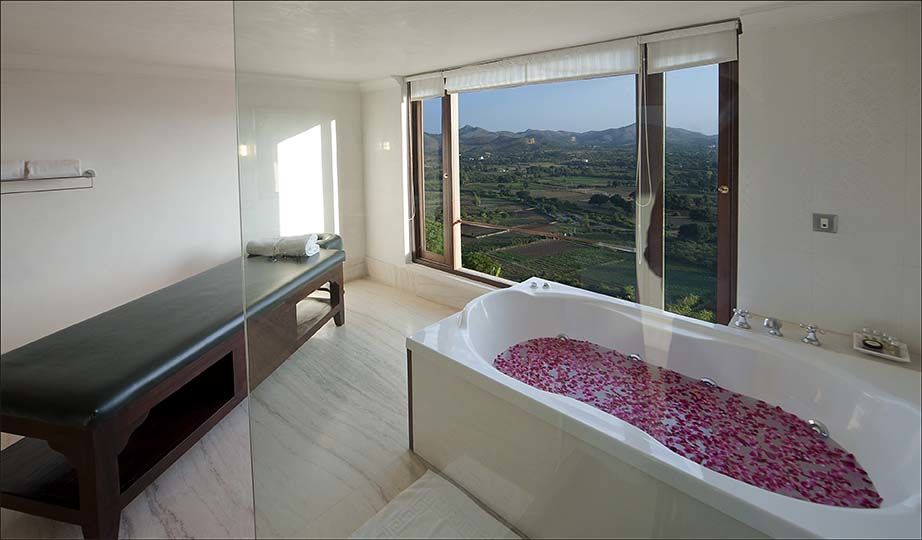 4. TAKE A WALK! - Step out on the streets on Udaipur and explore it's lakes, namely Lake Pichola and Fateh Sagar Lake and the majestic forts and palaces, namely City Palace, Bagore Ki Haveli and Lake Palace amongst others.

City Palace in all it's glory (Photo by Robert GLOD)

5. SHOP TILL YOU DROP - What is a trip without shopping? Duh! Udaipur is every shoppaholic's paradise with it's lively bazaars filled with authentic jewelry, clothes, handicraft items and semi-precious stones. Head to the famous Hathi Pol Bazaar or Bada Bazaar and let yourself loose!

What are you waiting for? We've planned out the perfect getaway for you right in the heart of Rajasthan. Now is the time!

Know of any other properties in Udaipur that will make you get up and leave right away? Give in your inputs on Tripoto and let the community grow bigger and better!