The future is bright, the future is here: in South Korea’s thrusting capital. I will quickly take you into the suddenly cool, hi – tech  neon metropolis that gave birth to Gangnam Style.

Decades ago, the sci-fi novelist William Gibson famously described Japan as ‘the global imagination’s default setting for the future’. Today, whether the global imagination knows it or not, it would more likely be South Korea. You only have to take the metro in Seoul to see why. Across from you will be a row of commuters glued to their giant Smartphones, possibly live streaming TV soaps in HD using the city’s ubiquitous broadband. This is a nation of frenzied early adopters, road testing the near future and then selling it to the rest of us.

Seoul may be 2,000 years old, but there are few signs of its history. This megalopolis, with the second largest metropolitan area in the world after Tokyo, is an instant city in the Asian mould. Driving in from the gleaming Incheon Airport, you cross an eerie hinterland of mudflats and mobile phone towers disguised as trees. And then you see row upon row of identical apartment blocks. These are what pass for suburbs here, not leafy villas but satellite towns with populations bigger than most European cities. Seoul’s intensity, its sheer vertical energy, is alien to the European sensibility.

In the permanent collection, among all the green Celadon pottery, I found an 18th century map of the city. With red vein-like streets, it charted a place that is now a tiny downtown zone in the new, steroidal metropolis. The map is ringed by mountains; these too have been swallowed by 21st century Seoul. It’s unusual to find cities with a population of 10 million on hilly terrain, but here they pop up unexpectedly through the sprawl. Cho had remarked that instead of architectural icons, Seoul had mountains. But apart from the topography, what remains of the streetscape painted on this tattered map?

Technology and design have become mantras in Seoul. One of the fruits of its tenure as World Design Capital in 2010 is the Dongdaemun Design Park and Plaza, which is taking shape to the east of the city center. Created by British Iraqi architect Zaha Hadid, this suite of slug-like buildings conjures up a futuristic city. It’s not clear what’s supposed to go in them, but they’re a very public display of Seoul’s faith in design with a capital D. But beyond such displays, there are districts where a cooler vibe evokes Tokyo and London, oases in the generic mega city. 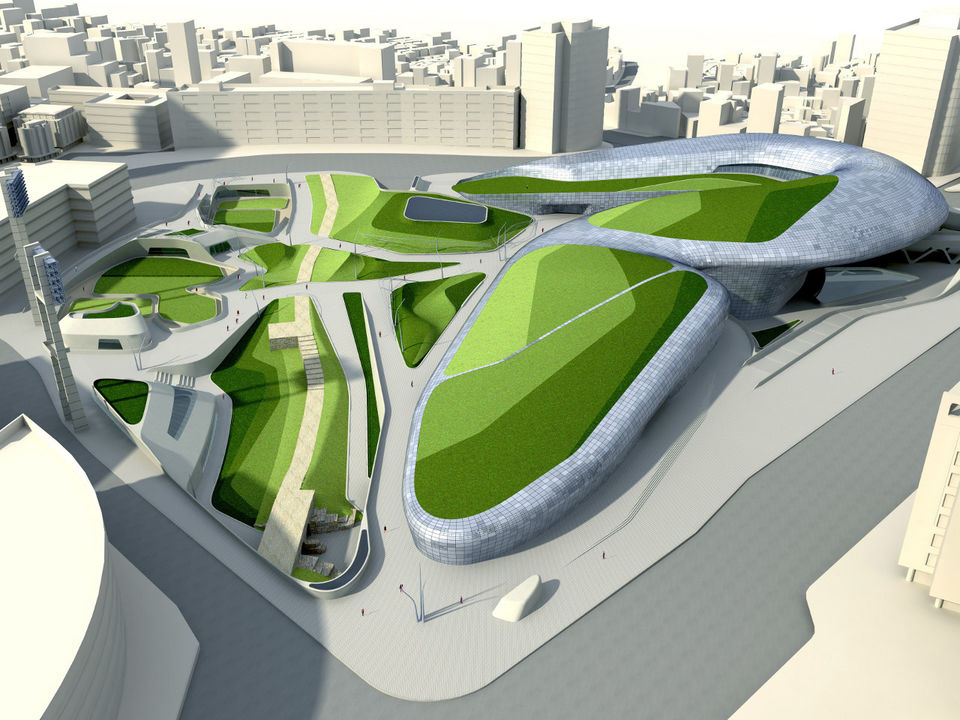 A few blocks away, and far more institutional, is the Leeum Samsung Museum of Art. This trio of buildings, designed by Rem Koolhaas, Jean Nouvel and Mario Botta, is another dose of European architecture imported for local edification. When I visited, there was a retrospective of the Korean artist Do Ho Suh. His delicate designs made of diaphanous nylon recreate places he has diaphanous nylon recreate place he has lived in New York or Seoul, keeping them alive as physical memories. For some reason, I was forbidden from taking a notebook into the show. ‘No paper,’ said the attendant. Next to her was a placard announcing that you could download the exhibition guide to your phone by scanning the QR code. Another click down the timeline. 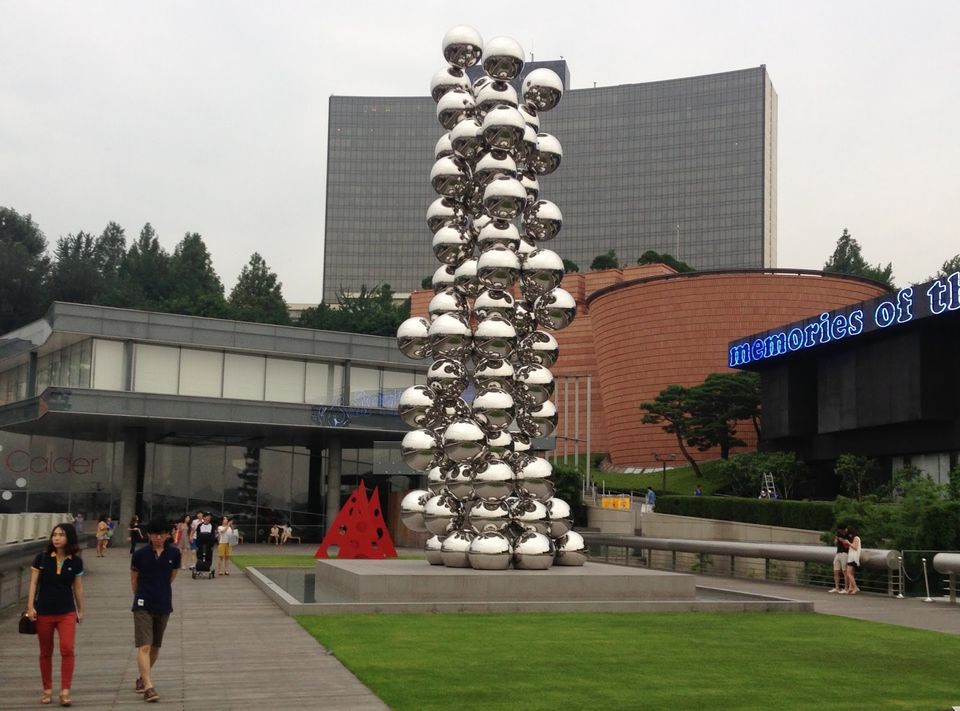 In search of the old city, I headed to Gwanhun dong. This street, lined with shops selling craft goods, appears to be for the visitors, who diligently stock up on dainty tea spots. The buildings are not old unless you count mid 20th century as old, but they are on a more human scale here, a pleasant break from the skyscrapers. I bought some incredibly expensive green tea from a specialist shop (I didn’t realize quite how expensive until, back in London, I found that the cylinder I had bought contained a tiny sachet of leaves). I bought some calligraphy brushes made of goat hair from an old man in a gloomy corner shop. He made me an offer of a Yakult bacteria drink. I’d heard that Sough Koreans are obsessed with well being, so perhaps I looked like my immune system needed a boost. 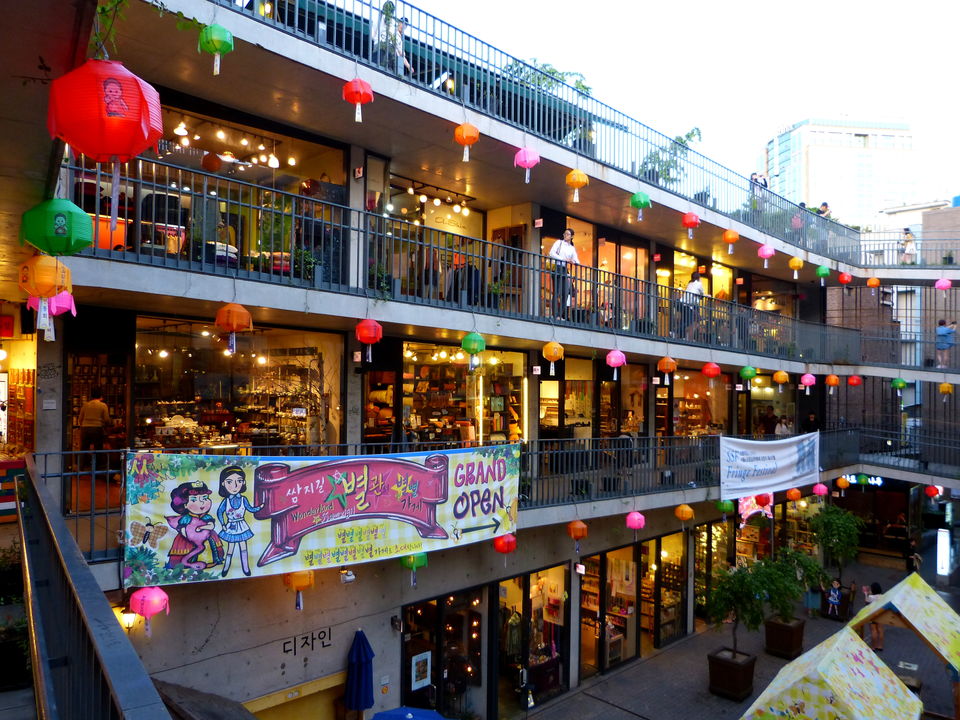 Just north of Gwanhu dong is the Bukchon gallery district. The main road is lined with coaches carrying visitors, but they are not here to witness a burgeoning art scene, they are visiting the Deoksugung Palace. If they crossed the road, they had found less orthodox treasures. One is a new building for the Kukje Gallery designed by young, New York based architects So Il. The concrete shell is draped in chain mail, like an armored version of Do Ho Suh’s fabric structures at the Leemum. 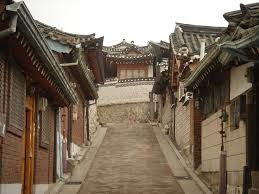 Just north of Gwanhu dong is the Bukchon gallery district. The main road is lined with coaches carrying visitors, but they are not here to witness a burgeoning art scene, they are visiting the Deoksugung Palace. If they crossed the road, they had find less orthodox treasures. One is a new building for the Kukje Gallery designed by young, New York based architects So Il. The concrete shell is draped in chain mail, like an armored version of Do Ho Suh’s fabric structures at the Leemum. 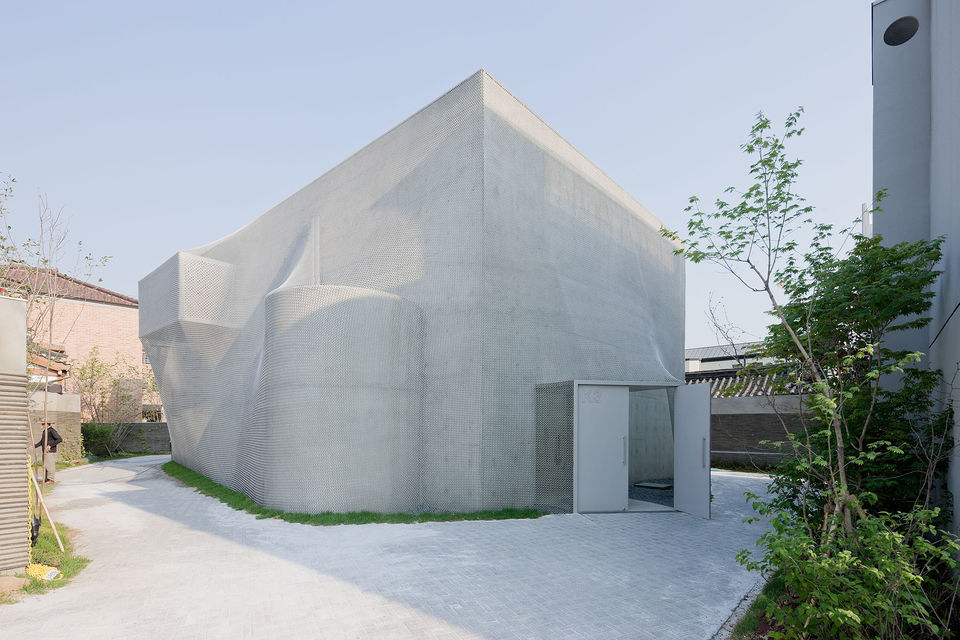 You can’t write about Seoul without mentioning the Han River, which is on the same monstrous scale as the city itself. In places it is a kilometer wide, and it divides the capital into two distinct parts. I got the sense that this was so when the concierge at my hotel handed me two maps, one for the north and one for the south. Fifty years ago, the southern half was mostly rice fields. Now it has a super grid of broad avenues lined with skyscrapers 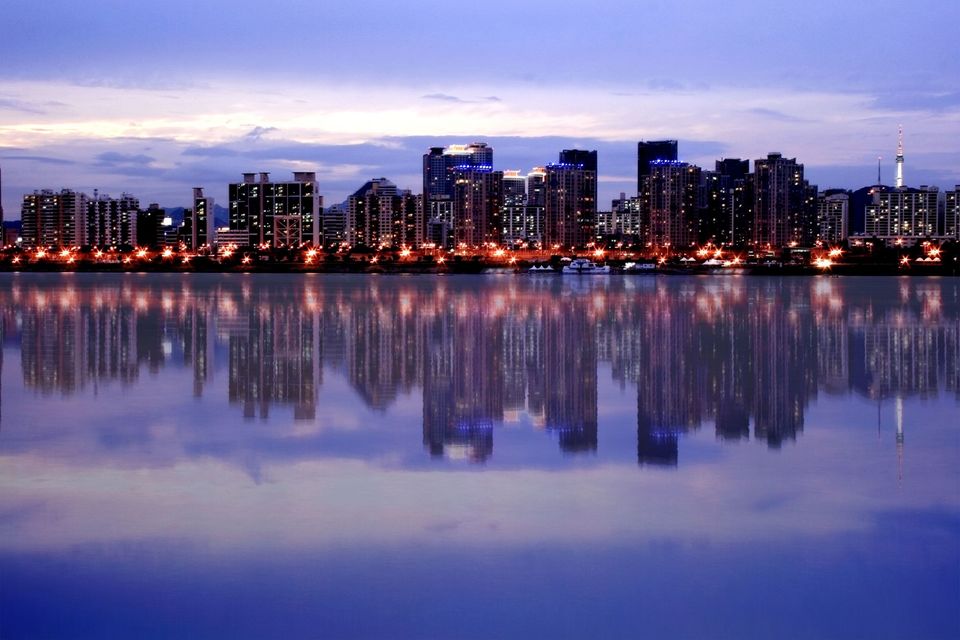 Teheran (named after a visit by the mayor of Teheran, before this boulevard became South Korea’s Silicon Valley) is a canyon of glass and steel, and a visceral reminder of the economic powerhouse the country is today. The quickest way to get here from north of the river is to take the metro. One station has a virtual Tesco. Using the touch-screen simulation of supermarket shelves, you can do your grocery shopping and have it delivered by the time you get home. But there are also more sobering offerings. Every station has several glass cabinets lined with gas masks. Is this in the event of a random fire, or in case of an even more random attack from South Korea’s saber rattling northern neighbor? The week before my visit, North Korea issued a statement reminding the world that it could reduce Seoul to ashes in three to four minutes. Despite their fabulous prosperity and hyper consumption, that prospect is always somewhere in the back of the minds of Seoul’s citizens. 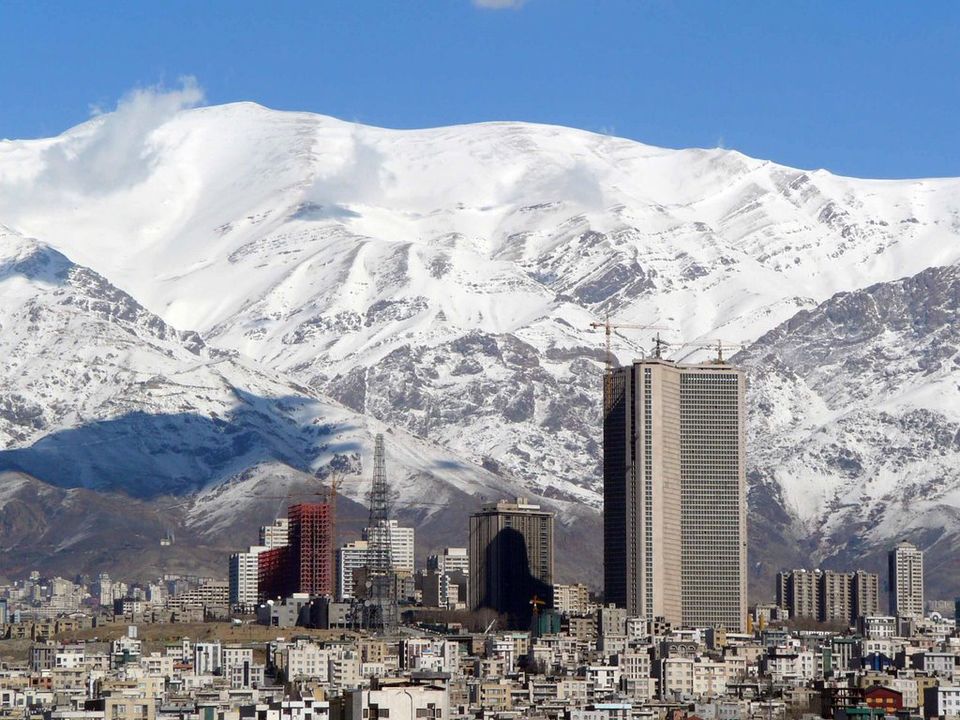