Spain Travel GuideSpain TripsWhy Should You Plan A Trip To Barcelona During La Mercè?

Why should you plan a trip to Barcelona during La Mercè? 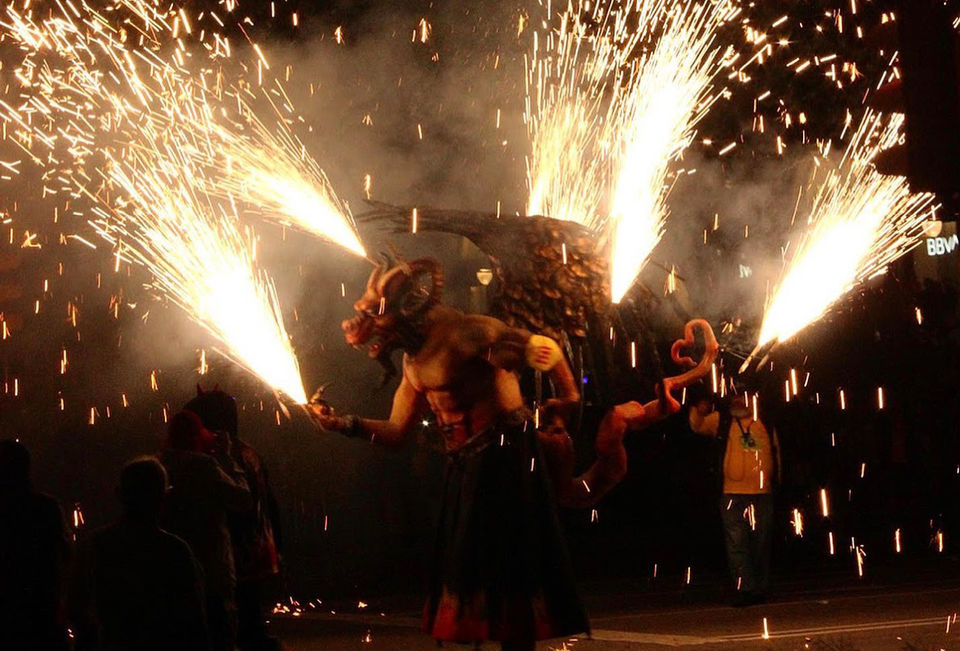 Let me start this by saying, you should go to Barcelona irrespective of the reason. It’s beautiful, it’s arty, it’s crazy, it’s perfect! So that’s it, blog over, see ya! :P

But there are some experiences that take a great trip and make it spectacular, in an unforgettable way. And La Mercè does exactly that to Barcelona, which is why it deserves to be talked about in detail! So here goes.

La Mercè is celebrated to mark the feast day of the patron saint of Barcelona, Saint Eulàlia, on the 24th of September every year. Even though the festival has religious origins and has been celebrated, in some form or the other, since 1687, there is nothing specifically religious about the celebrations. The La Mercè of the present times is a huge street party where everyone is invited!

The festival is of utmost importance in the Barcelona events calendar, and has the full support of the local government and authorities. Traffic of any form is prohibited at the Gothic quarter during the festival. Since the festivities is by the people and for the people – the 3-4 days are declared public holidays. And they don’t have a choice, since the locals have either transformed into dragons or giants or they’re busy making a human pyramid or maybe playing drums for hours continuously on some street. Add to it, the innumerable musical performances and theatre acts, video mapping on fancy buildings – again done by the locals. And if this is not enough to attract your attention, there are fanciest fireworks every night. Here, I’ve handpicked a few activities, which I feel should not be missed.

The word Correfoc in Catalan means the fire run, and this is exactly what it is. The main street becomes the venue for the parade, which consists of people dressed as devils and monsters. The participants get structures of mythical beasts like dragons, armed with fireworks and pyrotechnical displays.

And these are not just teenagers or kids or young adults – these are full-grown adults, some easily in their 70s, guzzling cervezas, pretending to be devils and getting kicks out of throwing fireworks at the bystanders. The constant drums in the background add to the whole setup – making it seem like a war between evil beasts and humans! 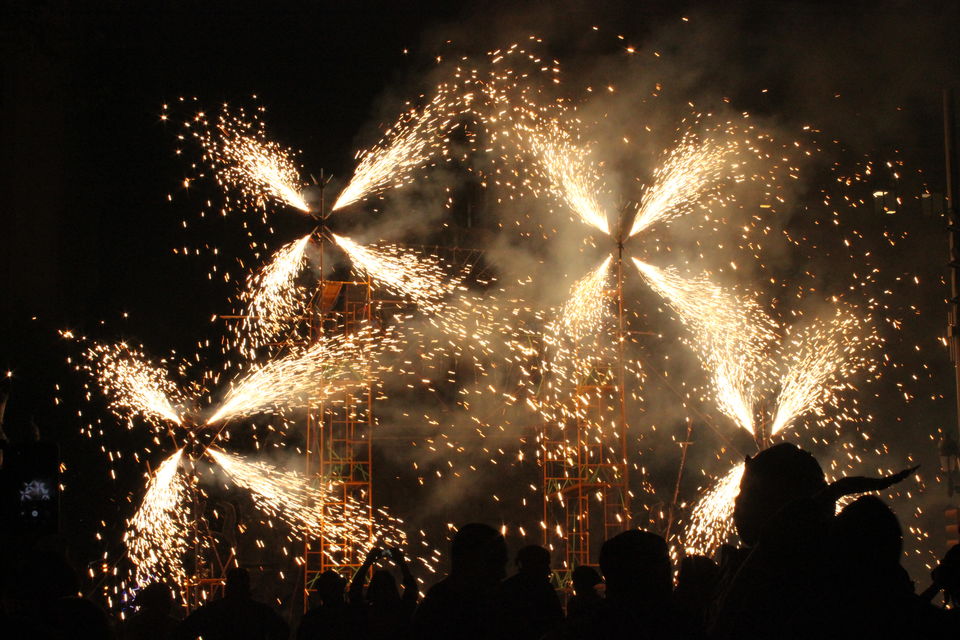 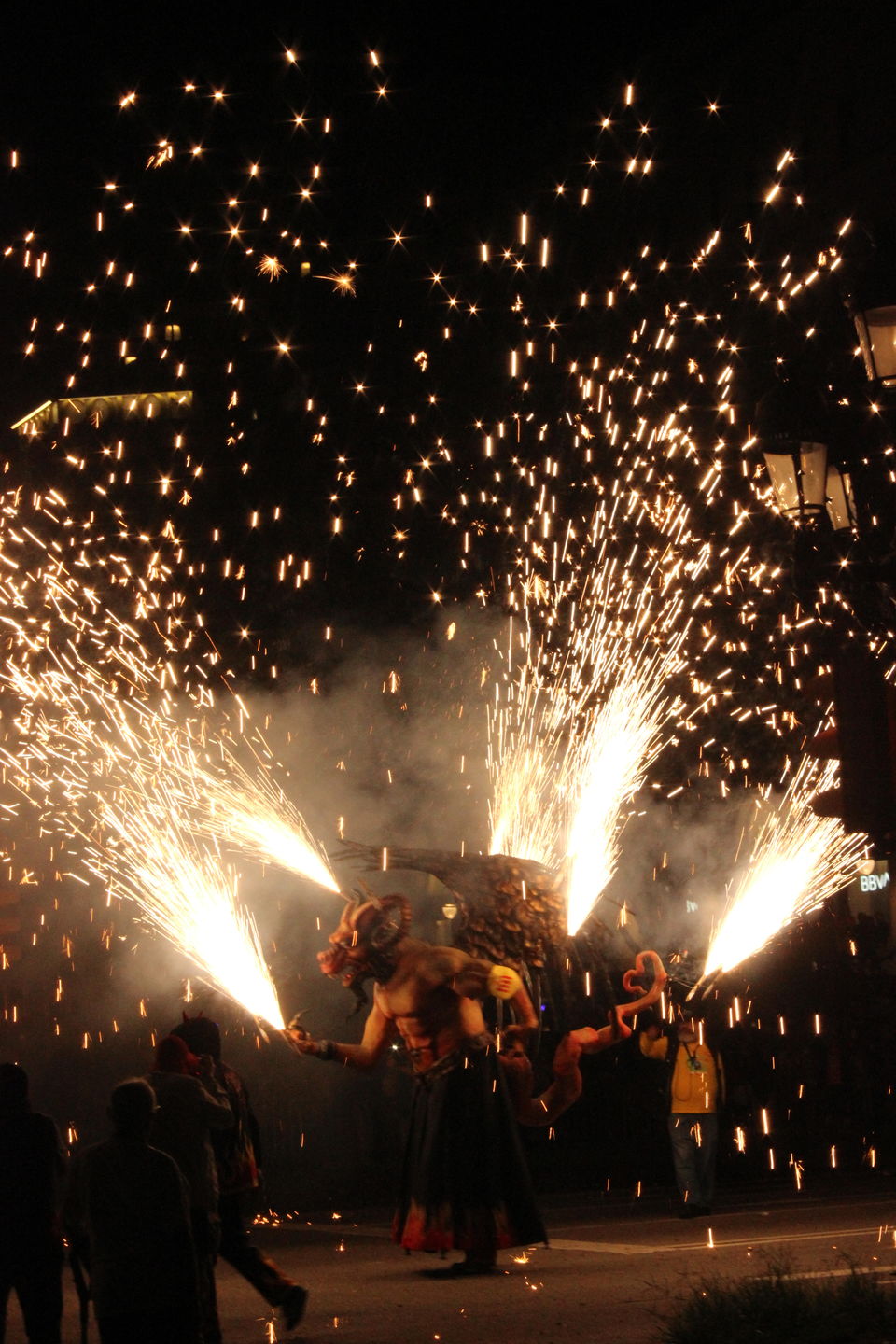 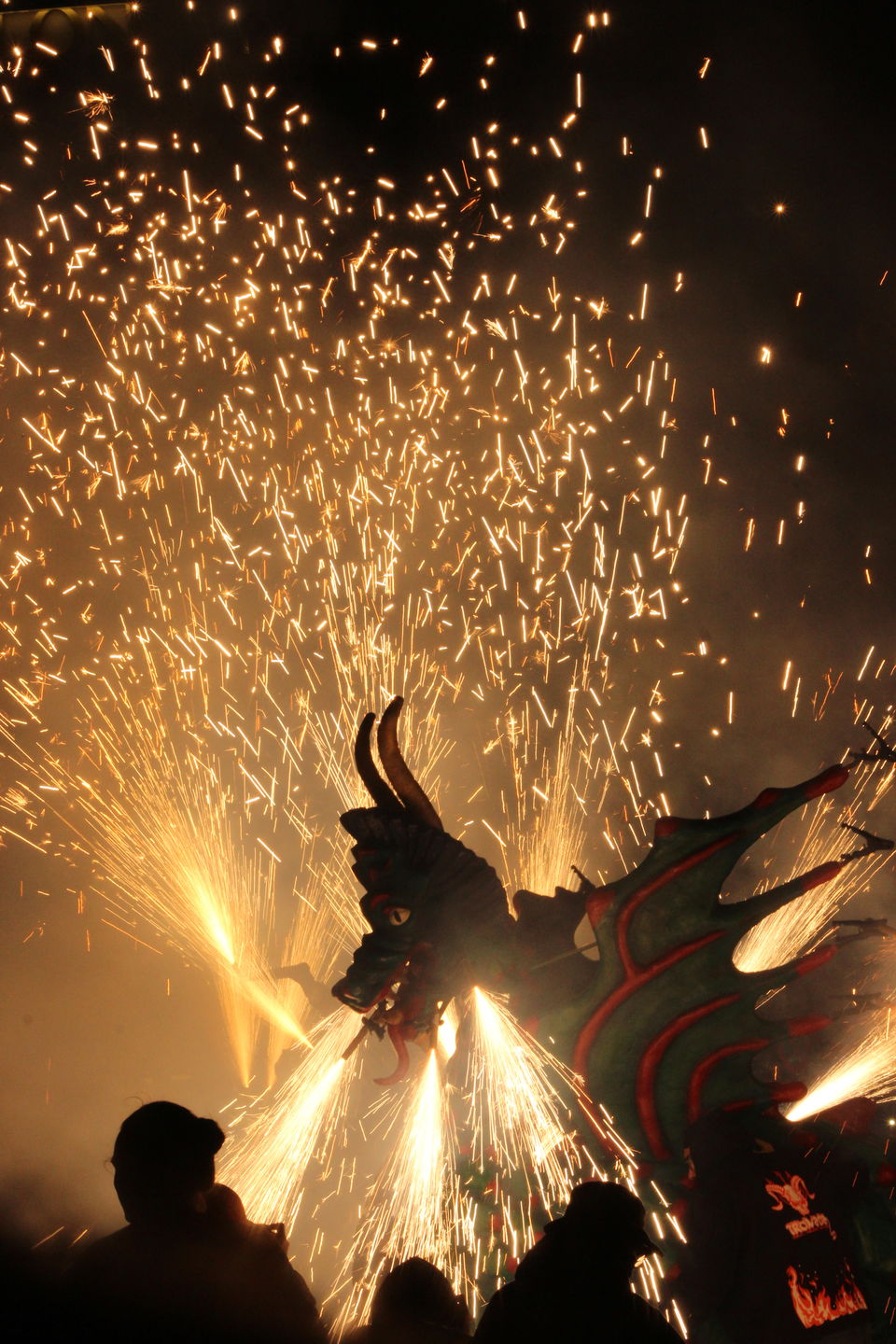 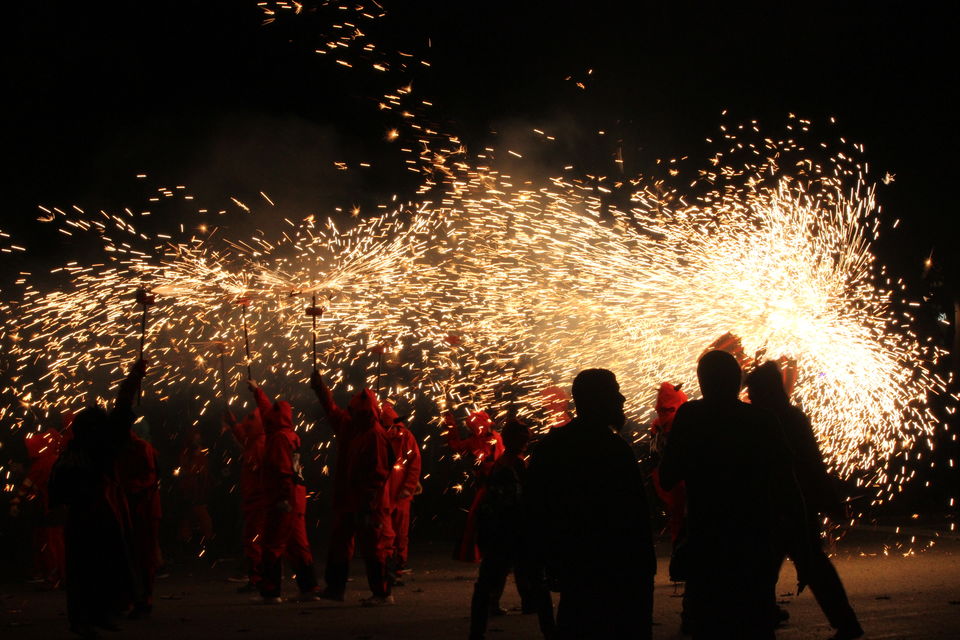 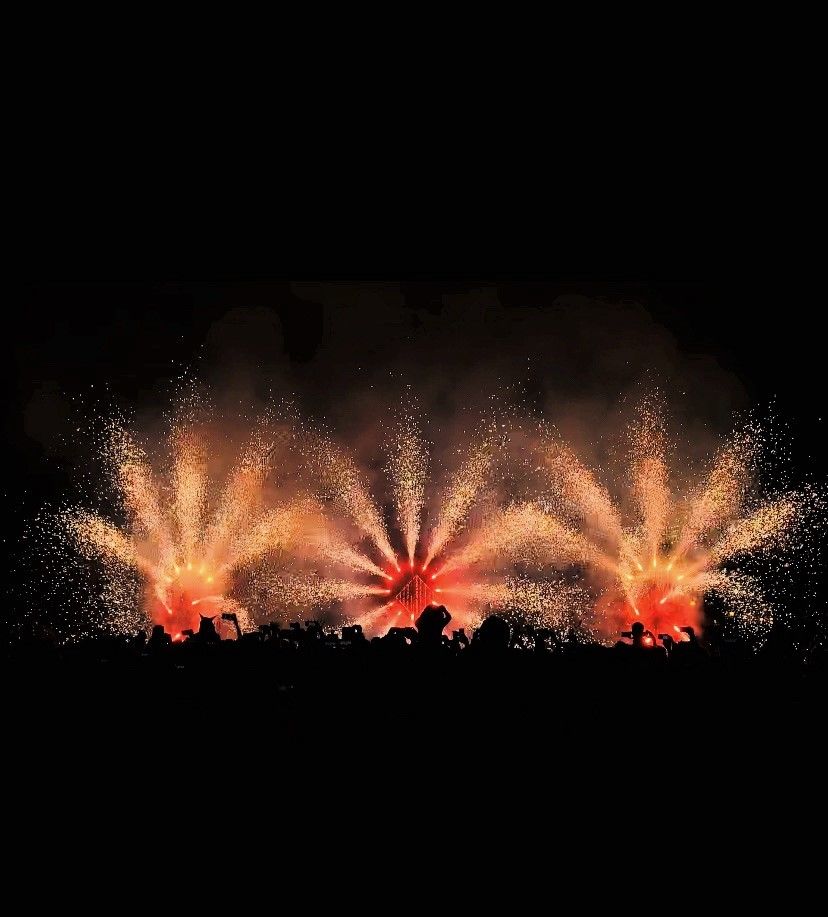 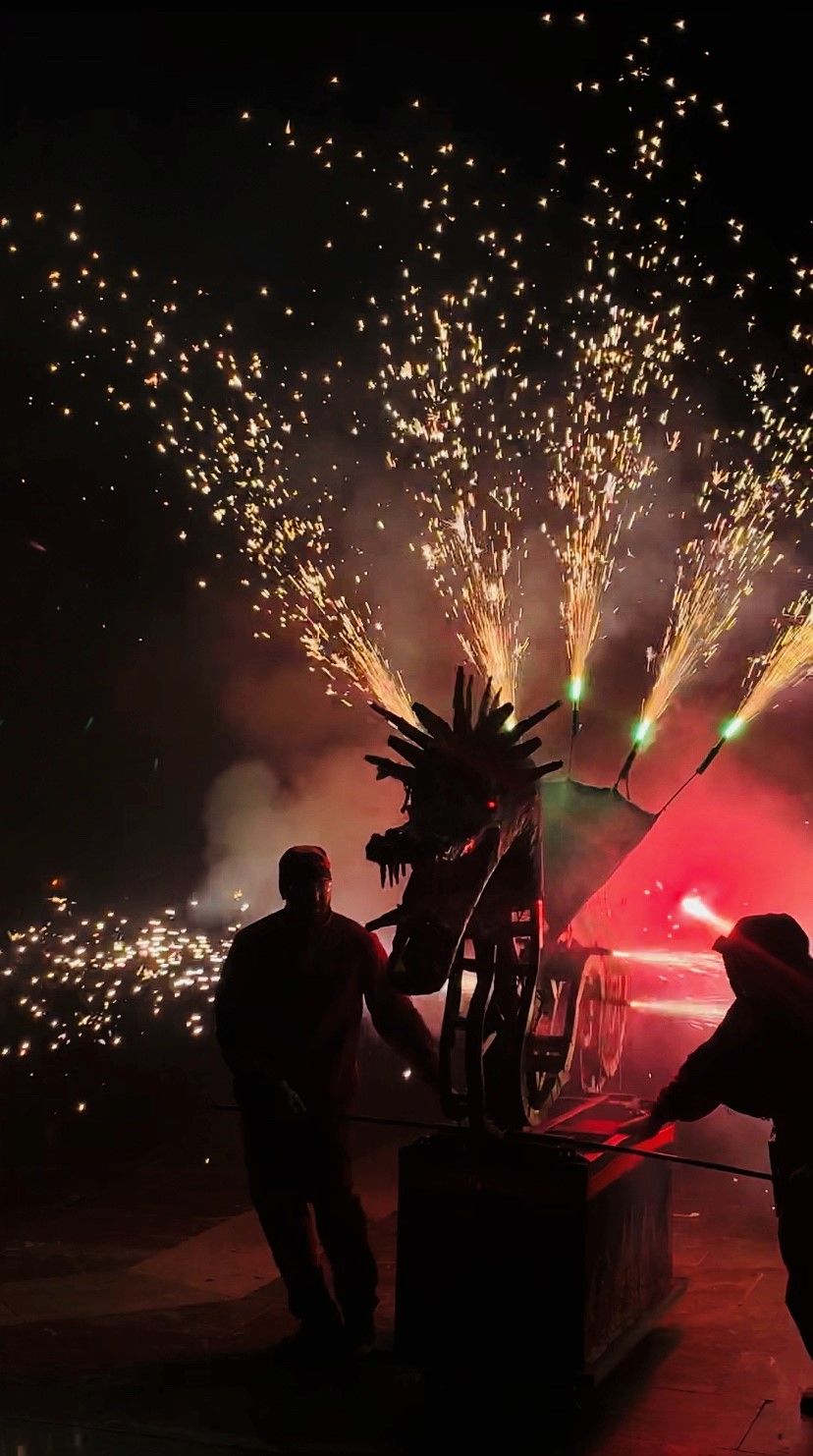 The Parade of the Giants

Papier-mache giants roam the streets of Barcelona, guided by the humans inside them and a team of people directing them where to walk. Not just walk, they dance, hop, jump and make merry.

The giants parade happens twice – one during the night, when the giants are unveiled. And the other, during the morning on the final day of La Mercè. The giants take over the entire city in the morning – wherever you go, you see a few dancing! 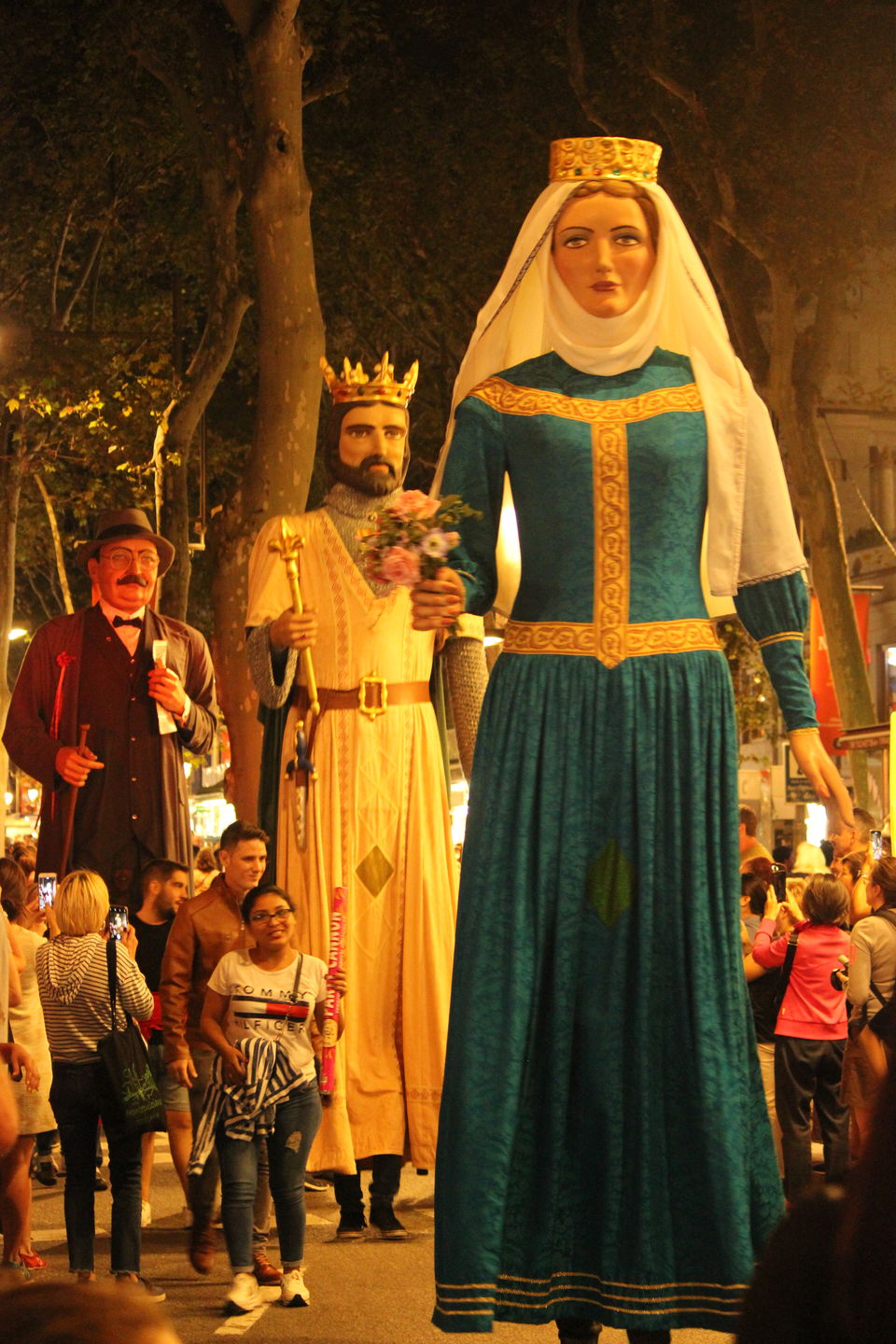 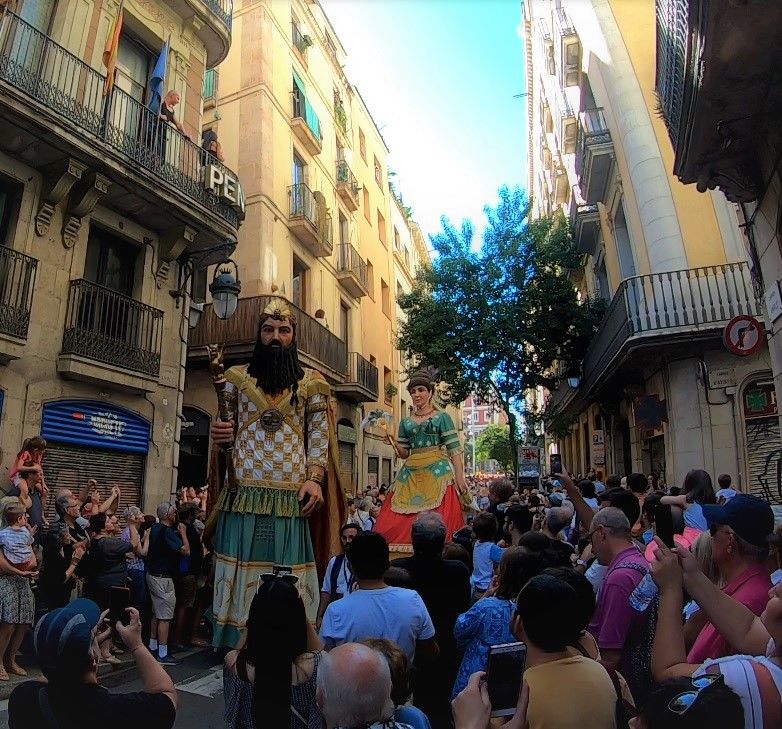 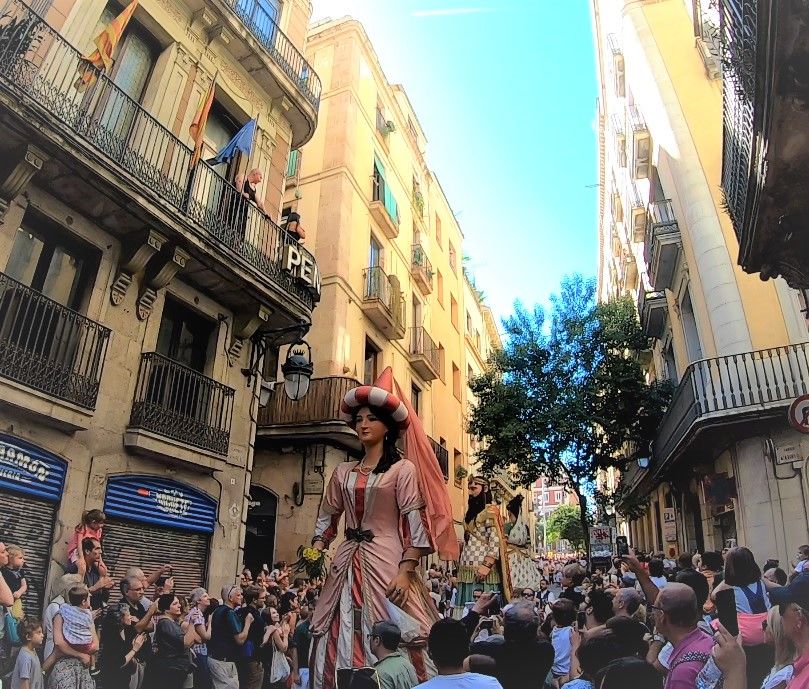 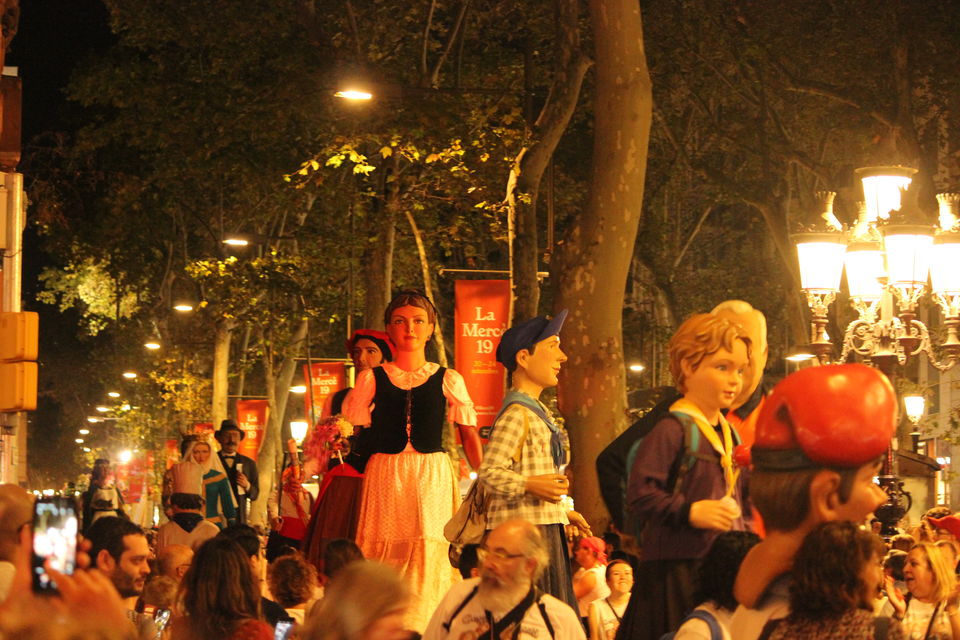 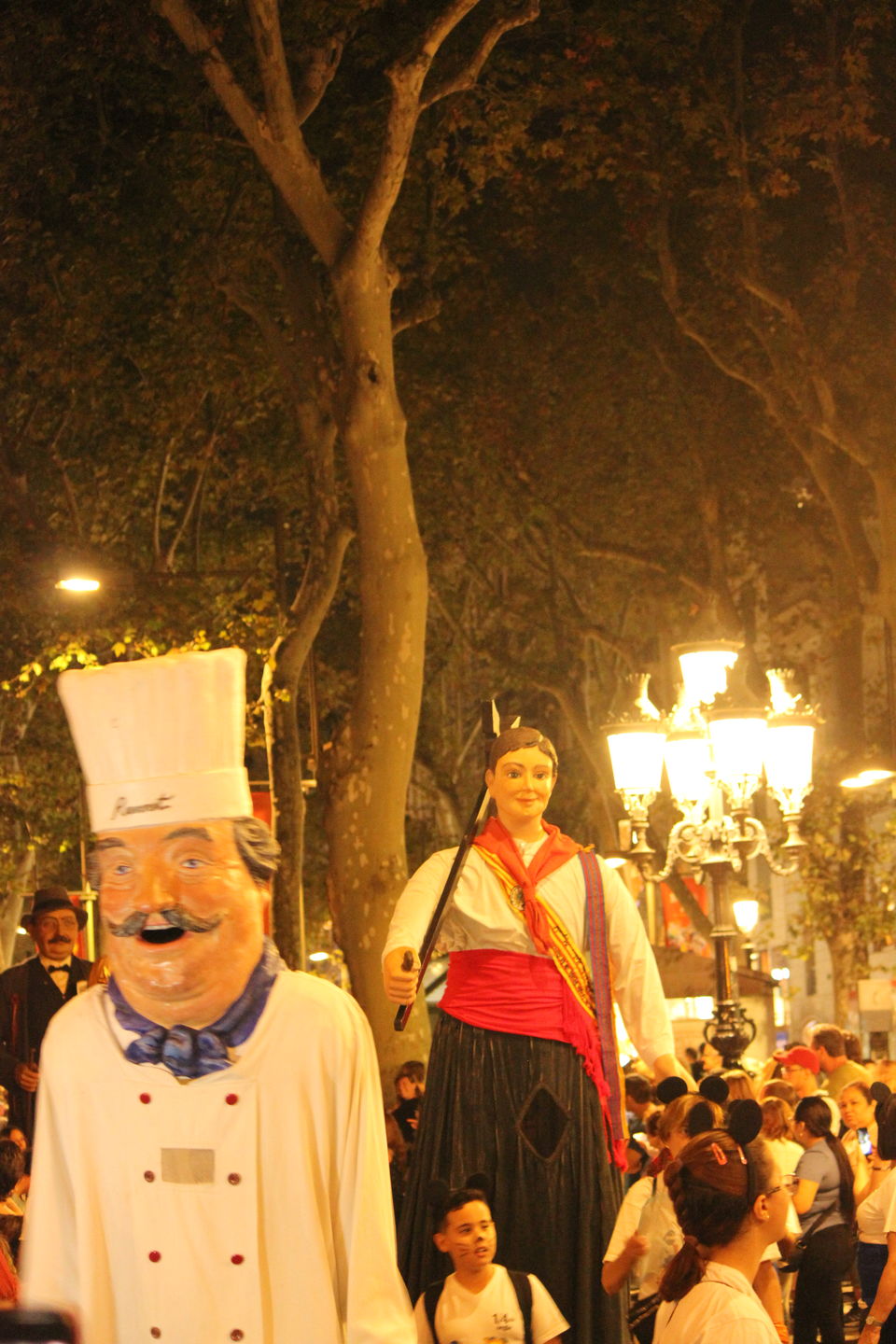 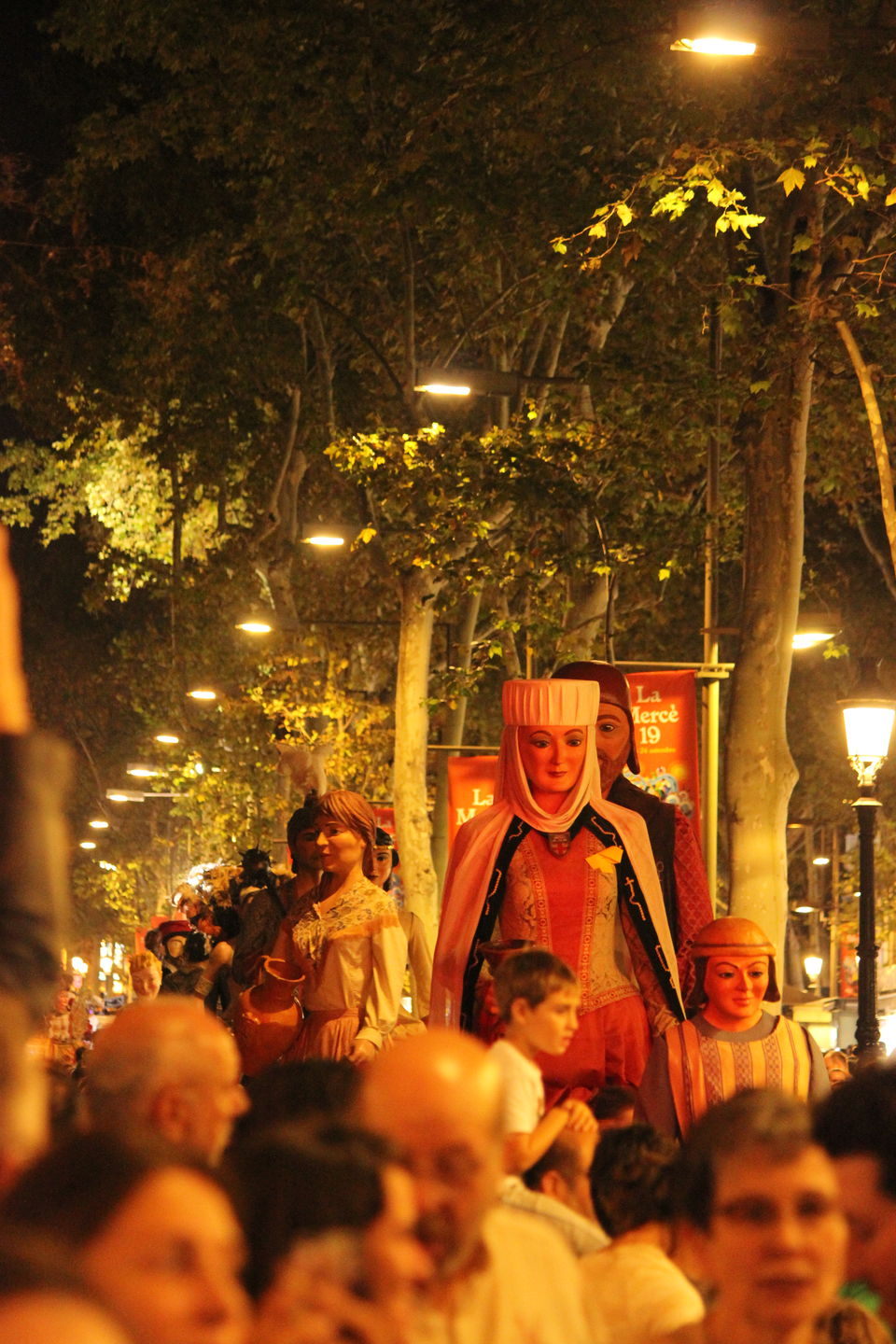 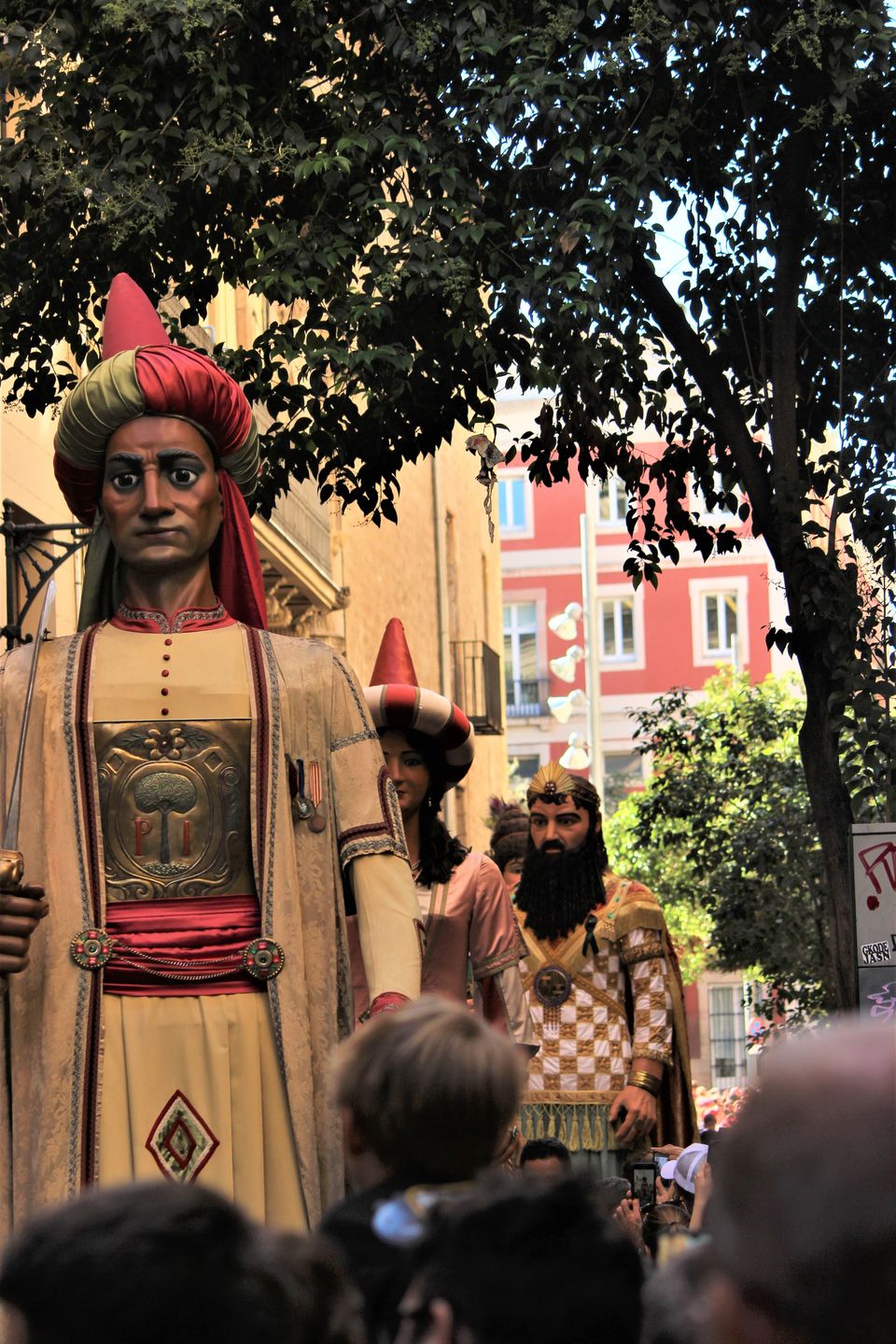 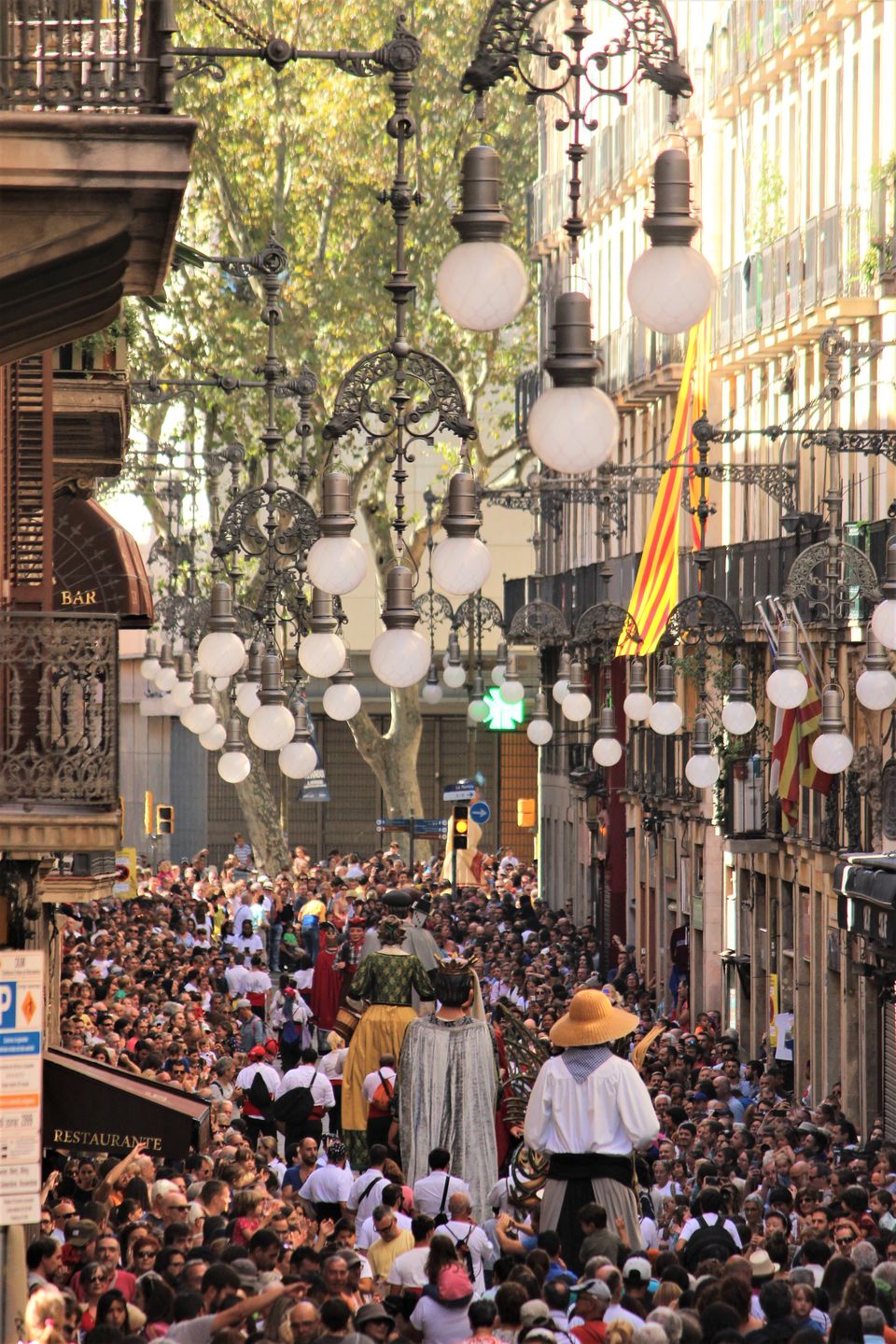 More fireworks! Each night there are firework displays scheduled. Most of them are at the Barceloneta beach front, however, they save the best for last. The final event of the La Mercè is the pyrotechnical display at the Plaza de Espana, which is by far the grandest firework display I have ever seen!

The Museu Nacional d’Art de Catalunya, a palatial museum at the Plaza de Espana is cordoned off for general public 5 pm onwards as the fireworks are scheduled at around 9 pm. The square fills up with people from early evening itself – it’s best if you reach the venue by 7.30 pm – however, the fireworks are visible from everywhere clearly. The half an hour-long display of fireworks is beautifully co-ordinated with the musical fountains, which dances on many English and Spanish classic songs. There are thousands of people watching, singing-along and sometimes, turning the flash of their phones on – a surreal experience! My favourite moment here was the echo of “We all live in the yellow submarine…”. 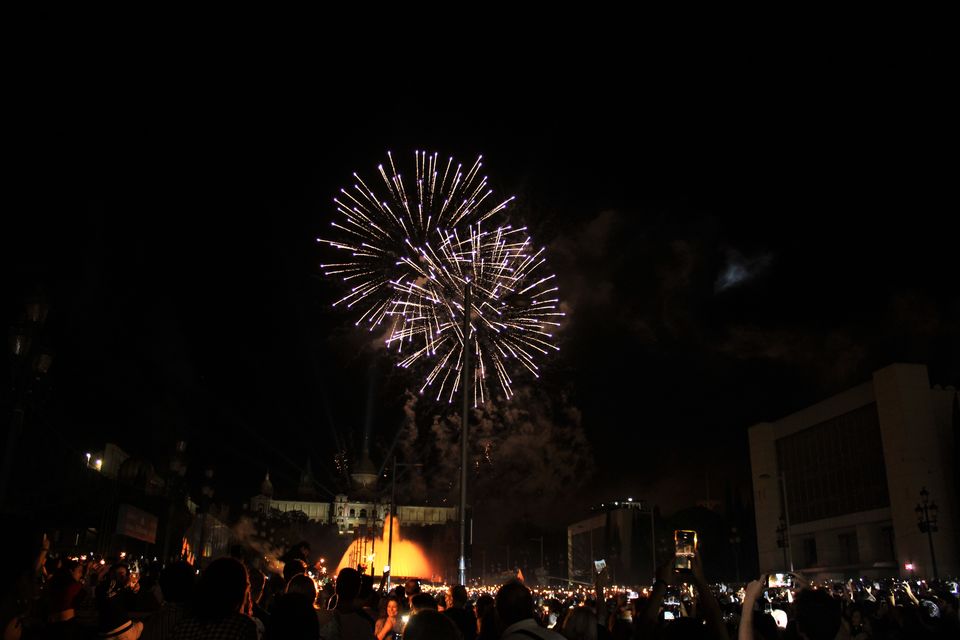 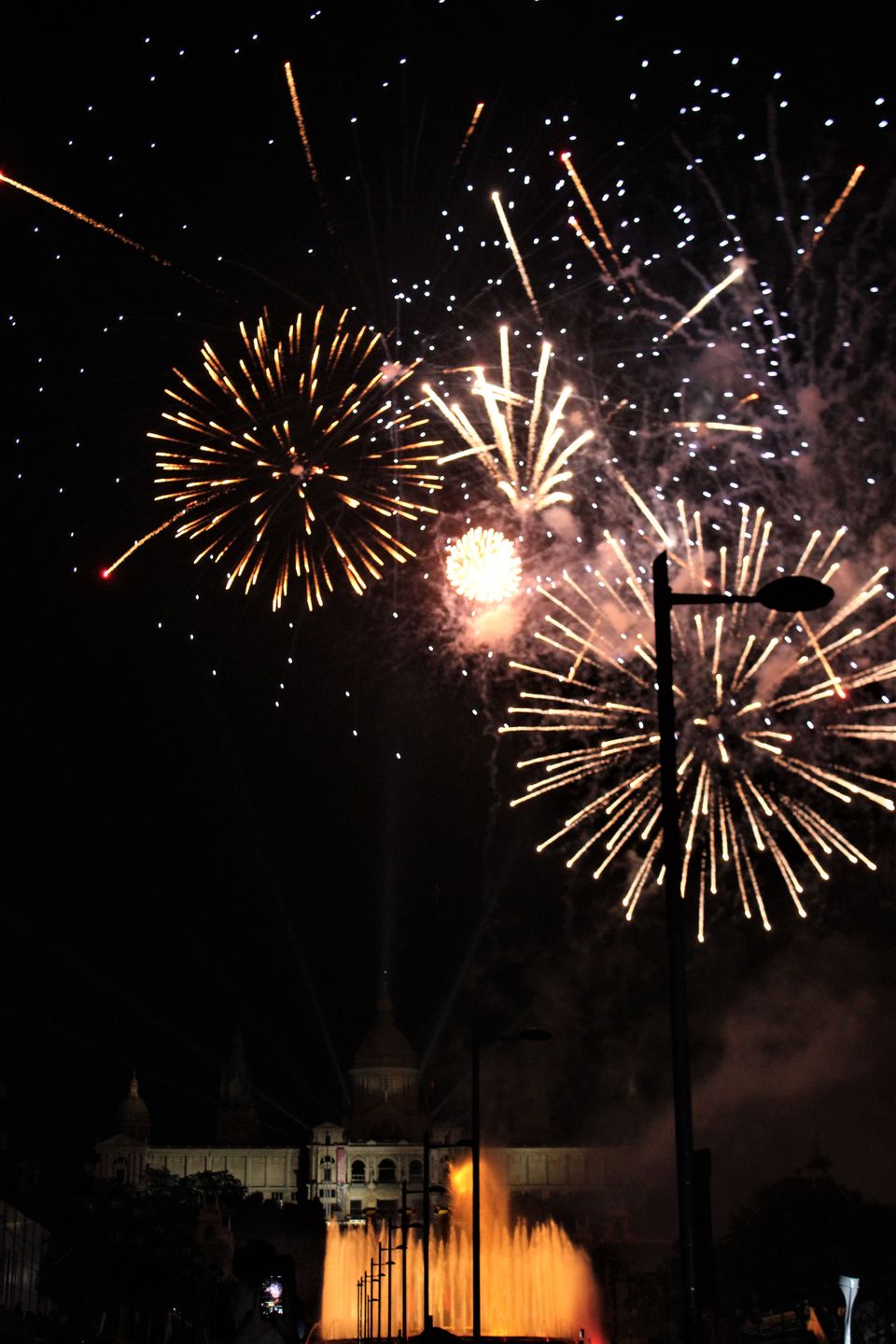 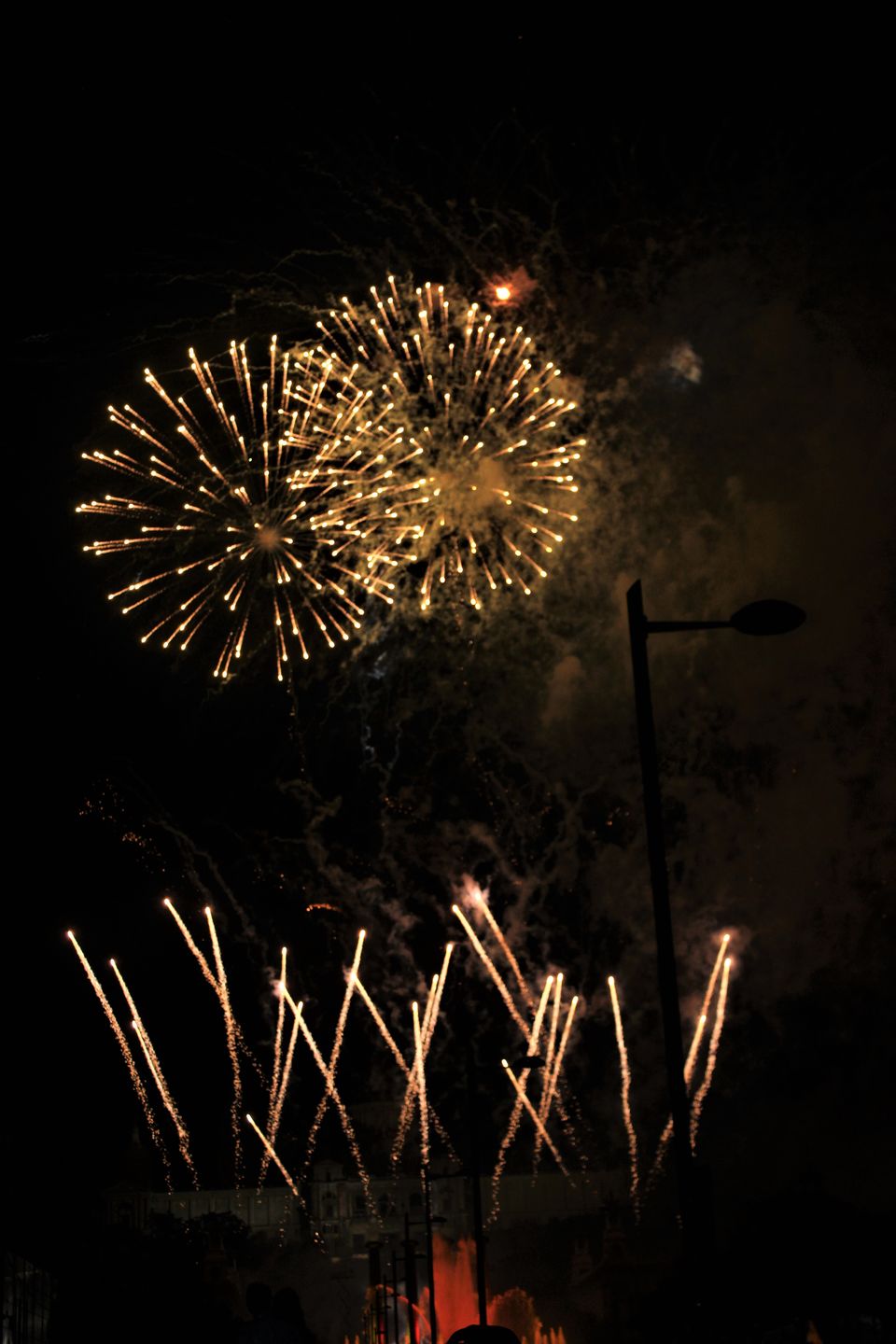 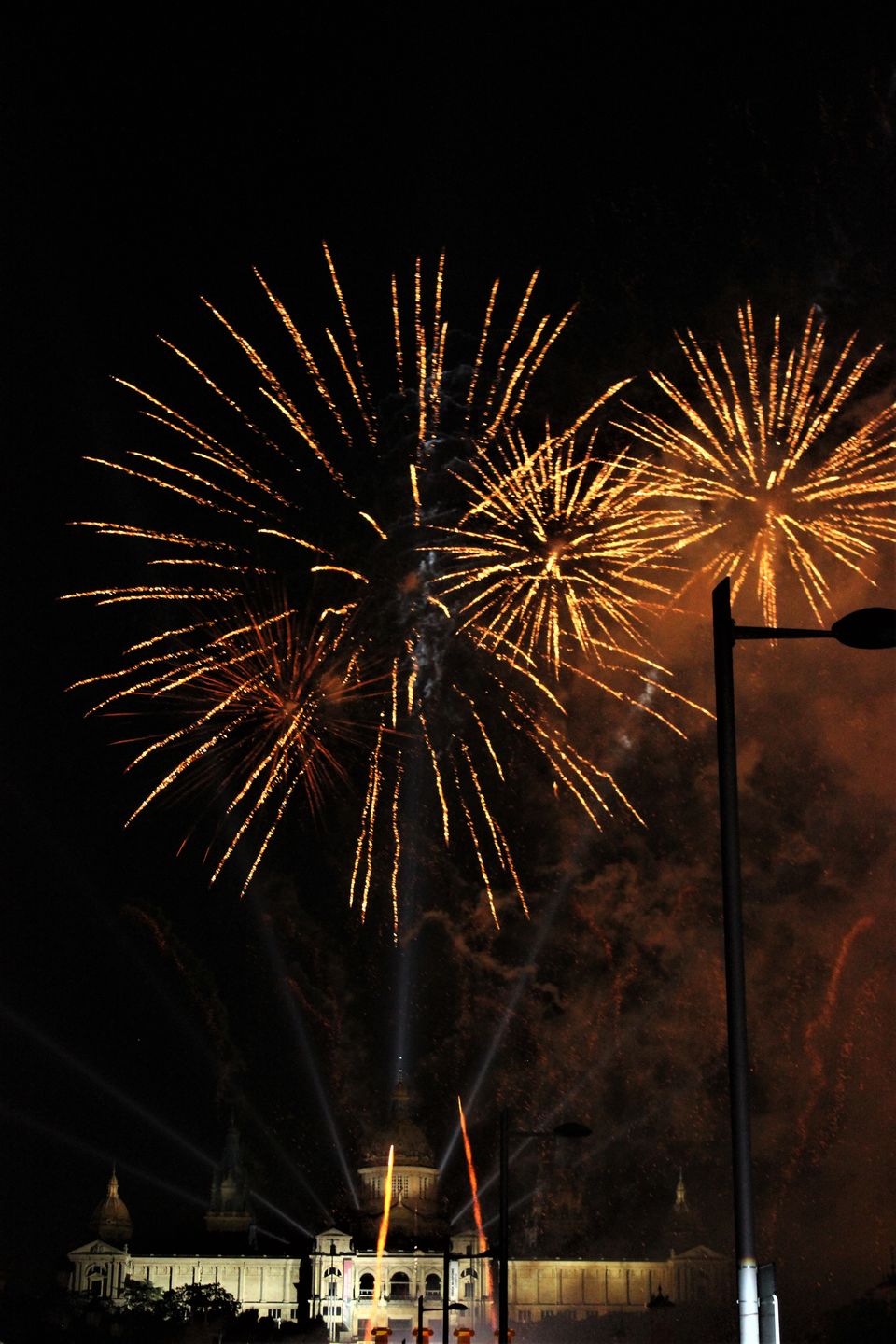 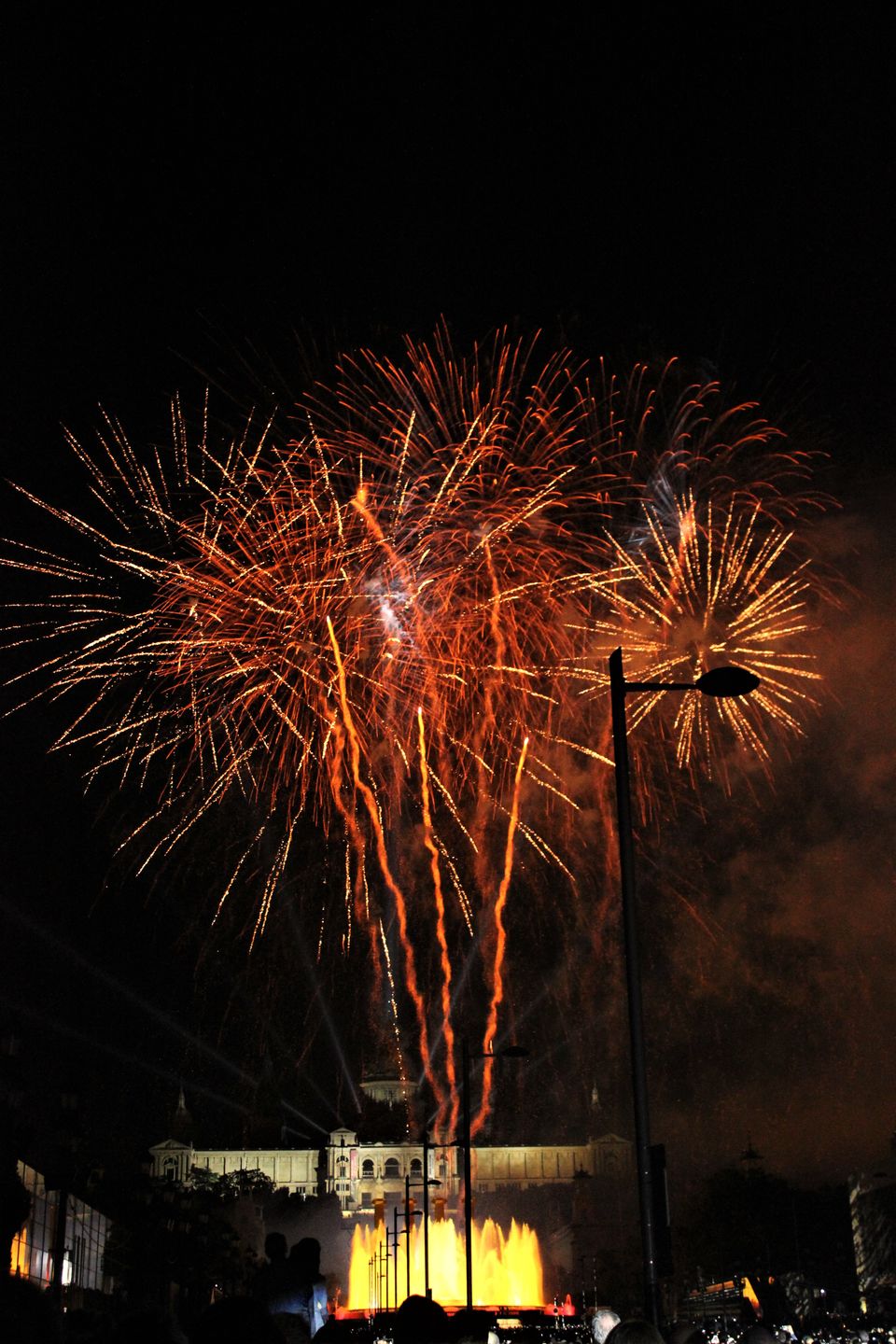 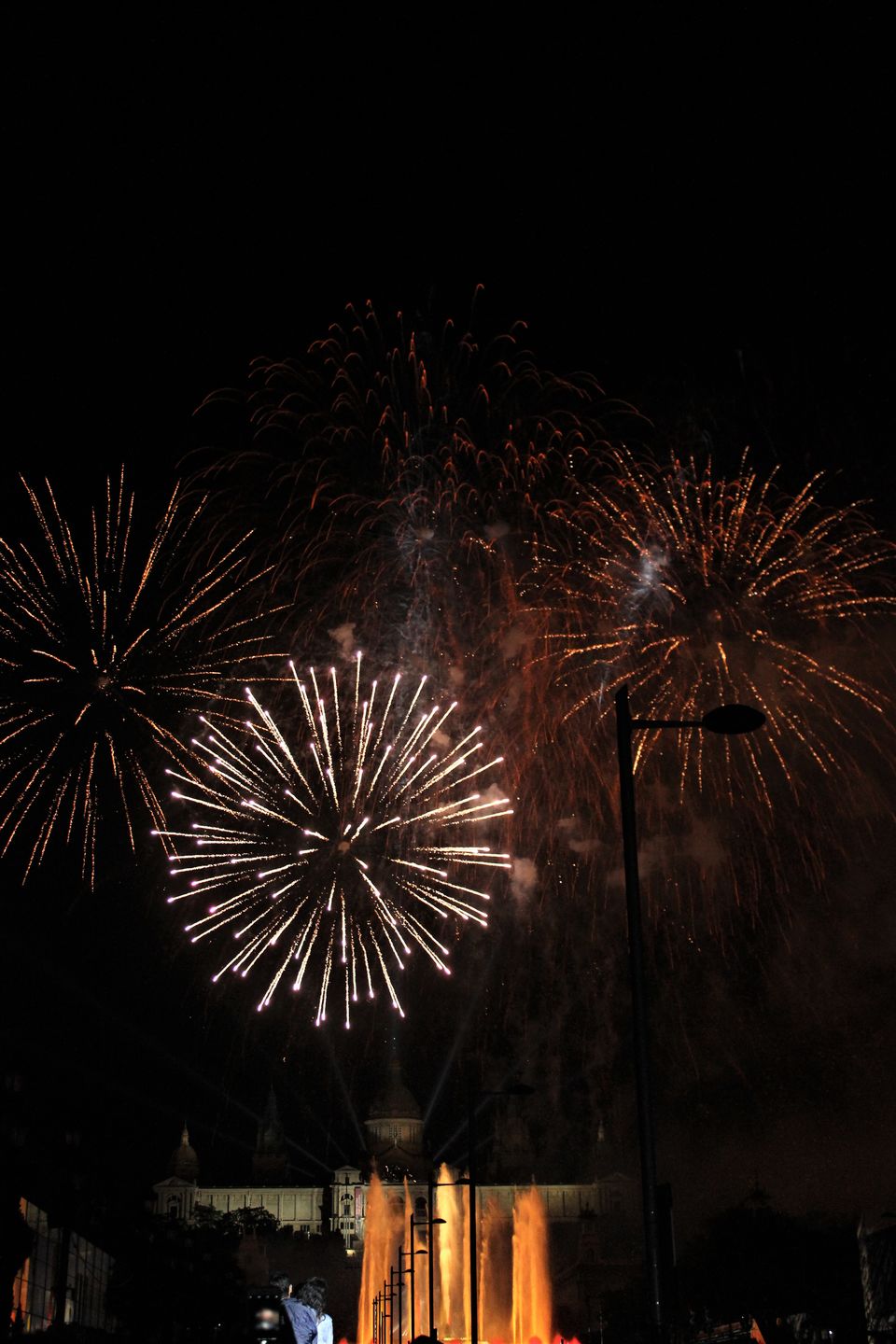 The best part of La Mercè is that there is always something to do on the streets. The moment you feel bored, head out and you’ll bump into some epic street performances. And not just the ones you catch at the metro or with random people playing – these are professional performers. Feel free to dance away – you’ll see many joining in! 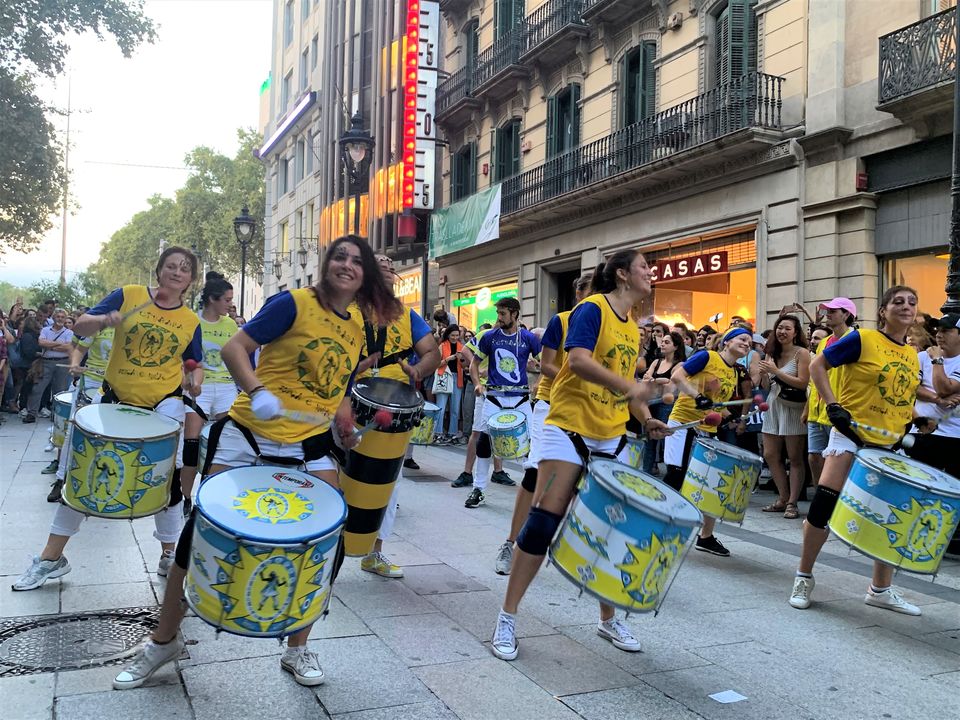 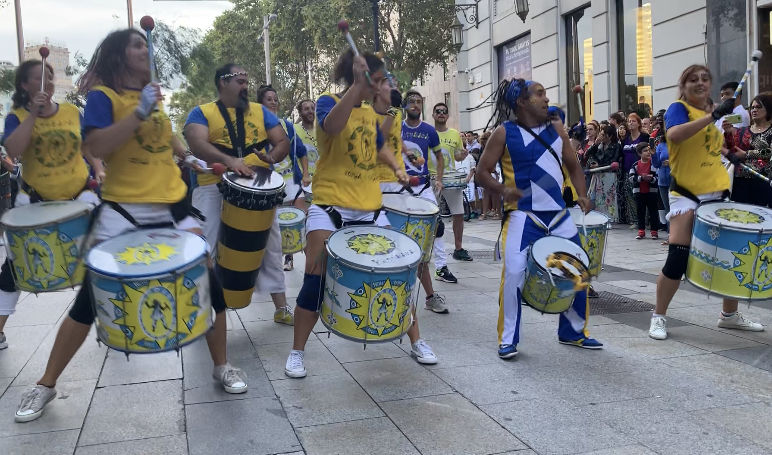 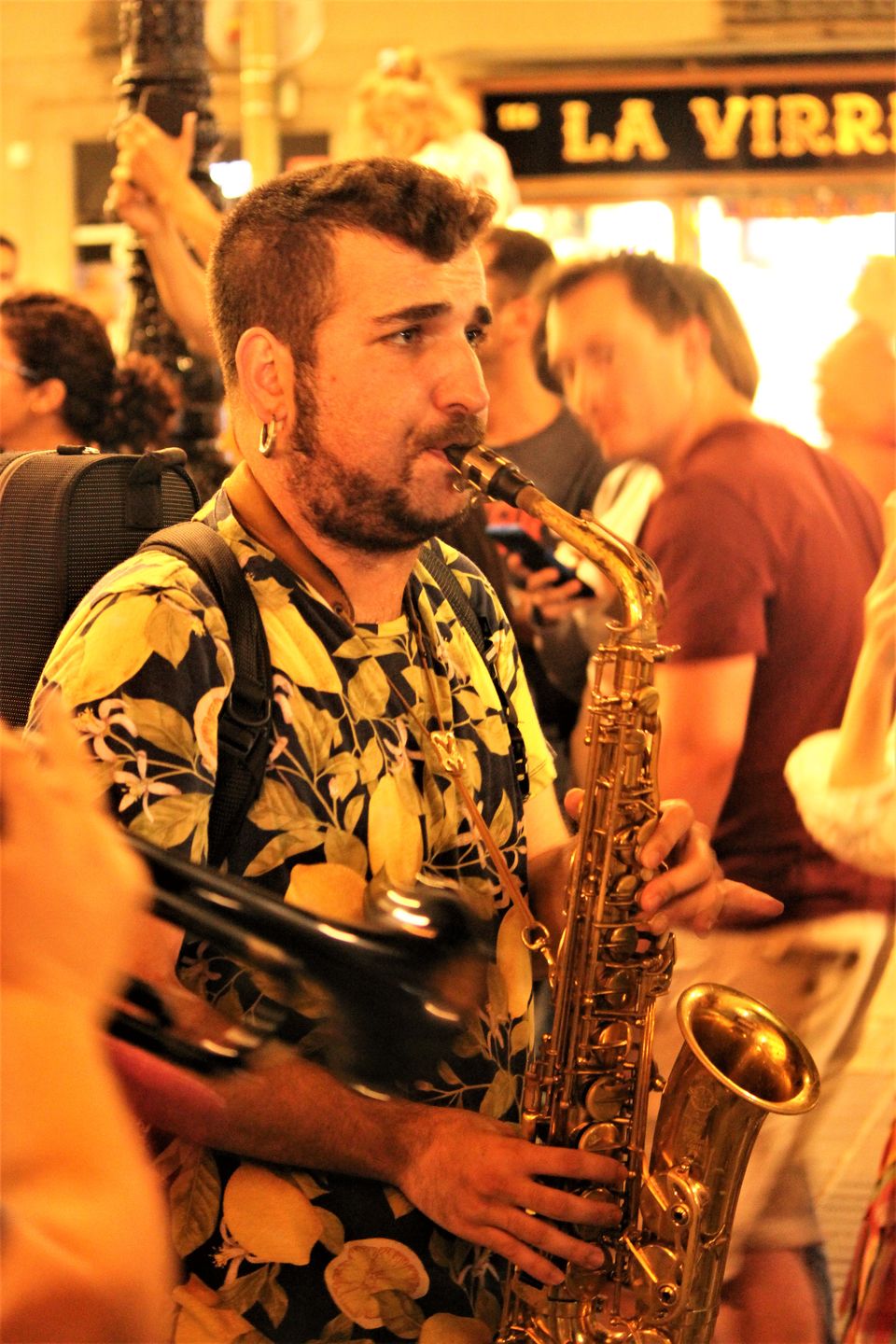 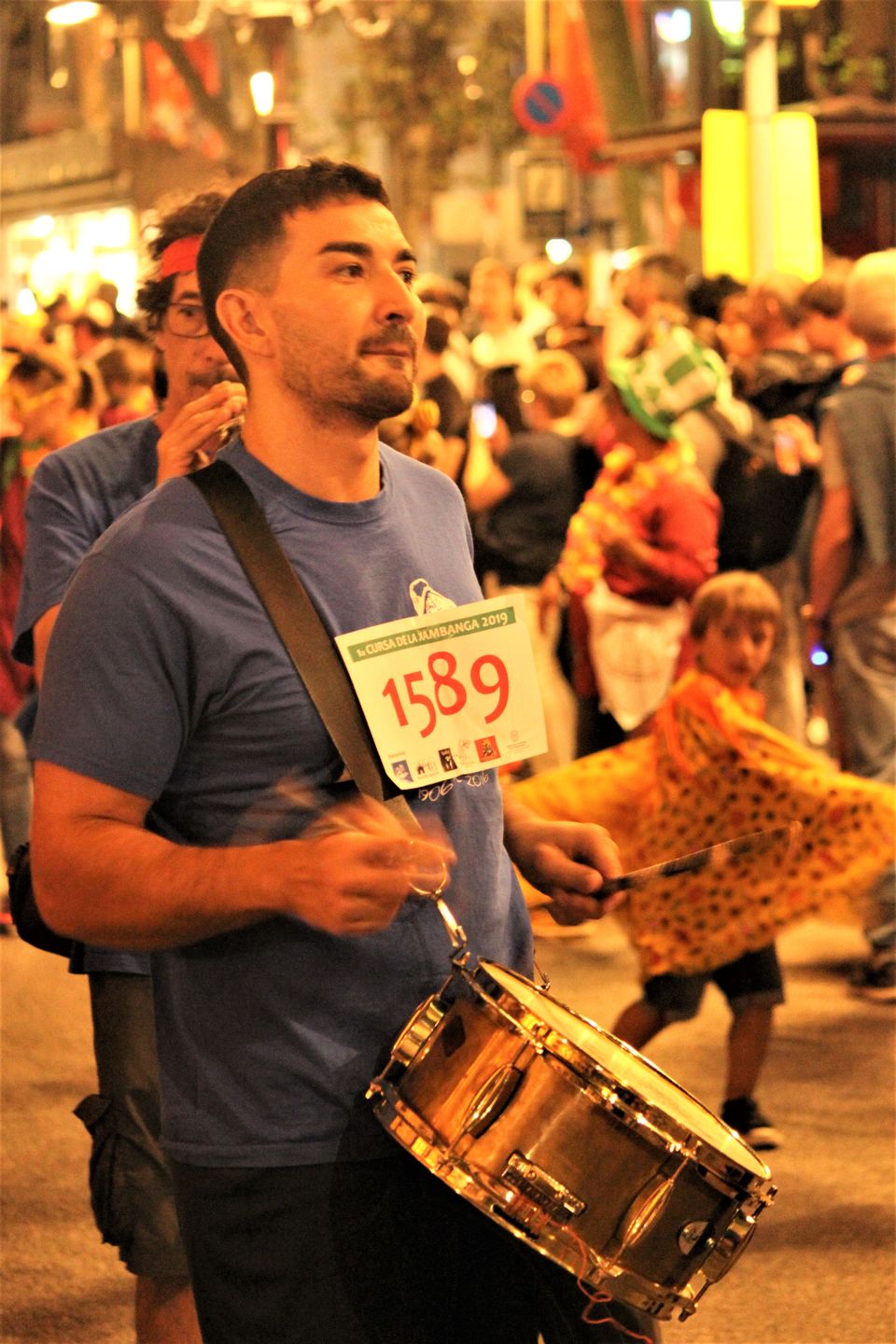 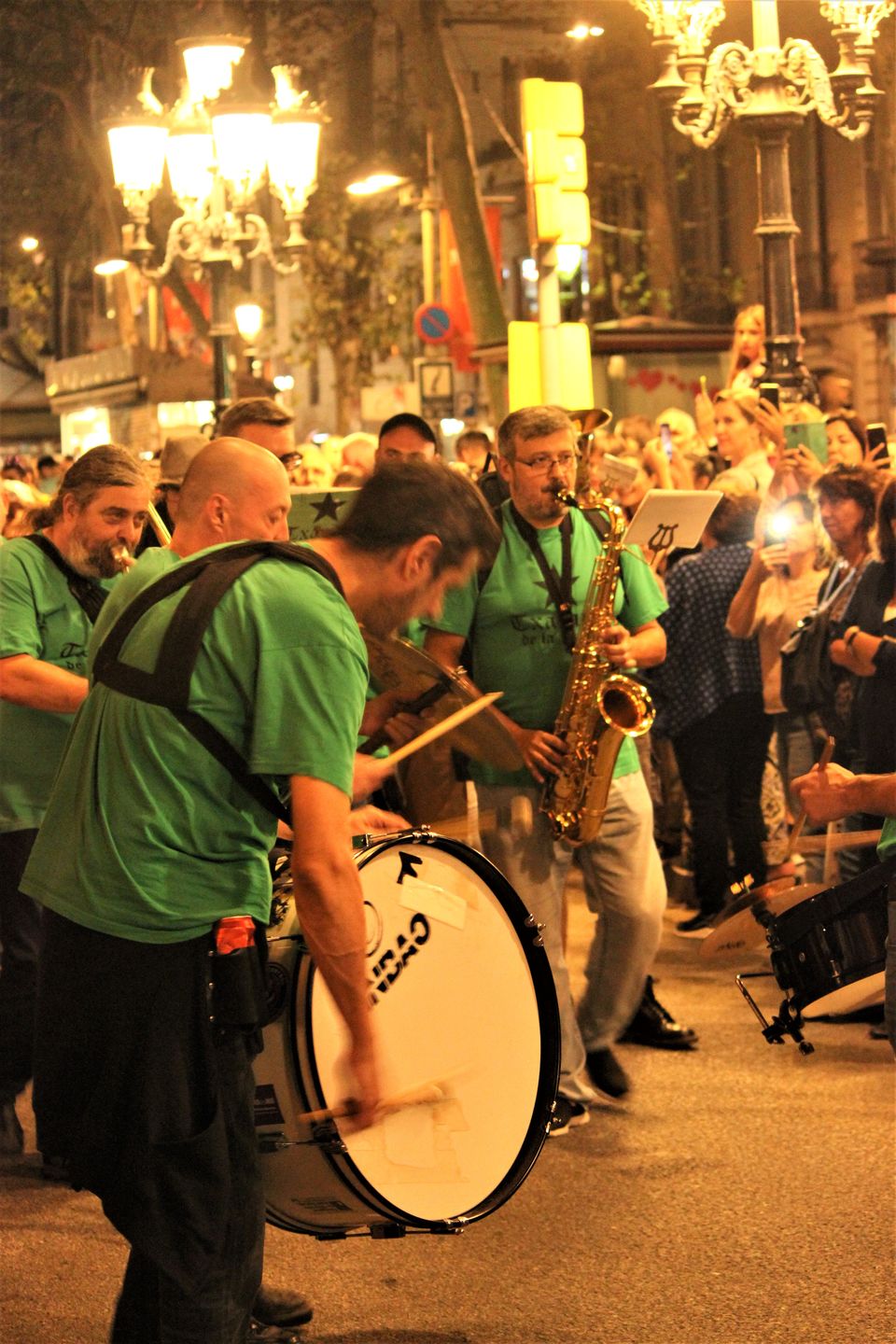 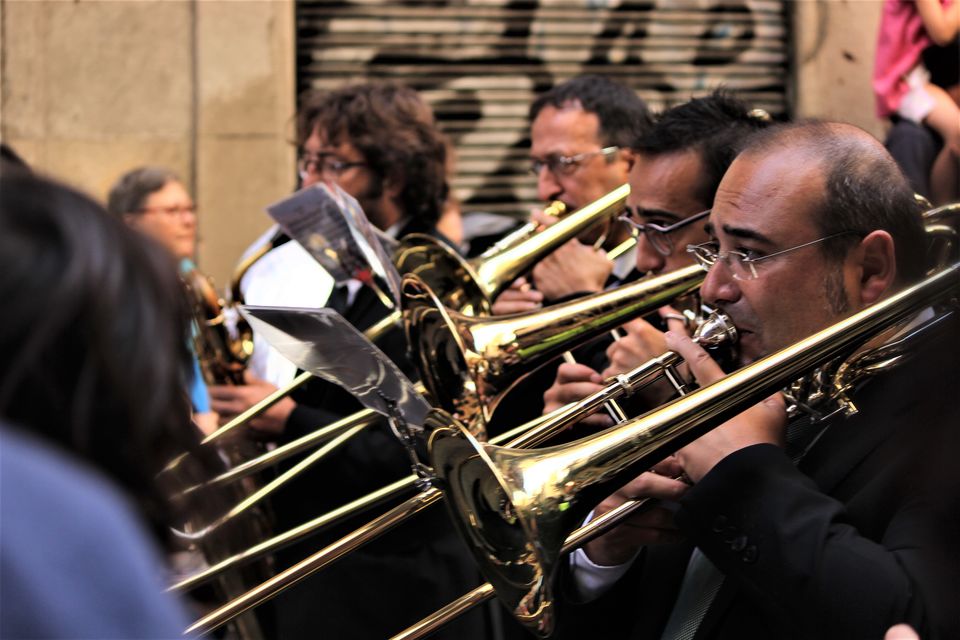 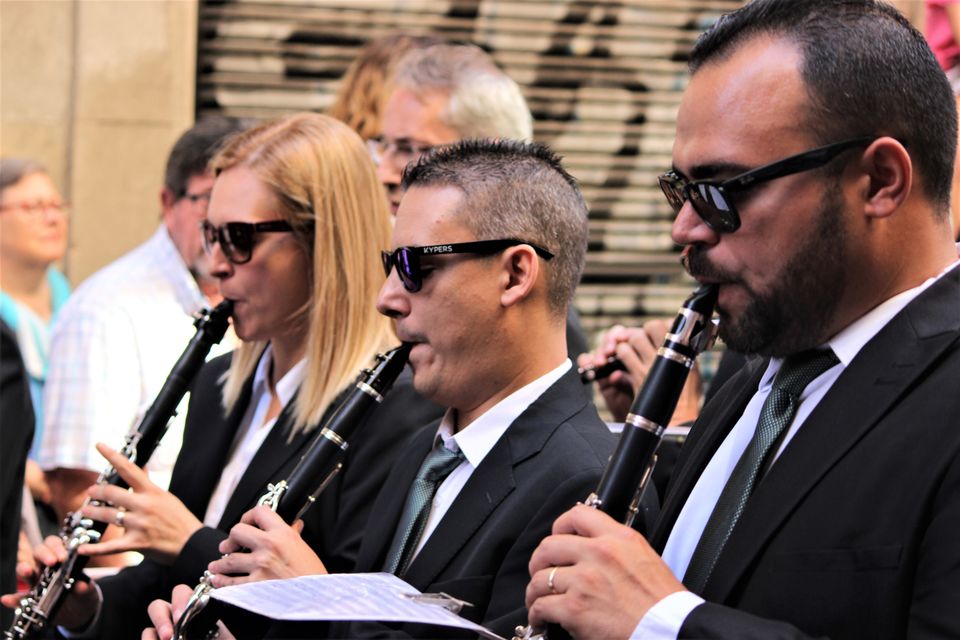 So the big question is - how much does La Mercè cost you – the entry fee, participation fee, etc.? It costs you ZERO! Yes, you don’t have to pay a single cent to attend any of these activities. All you need to do is ensure you stay at the Gothic quarter, grab a can of cerveza (very important!) and just walk around – you’ll bump into some interesting activity. If, for some reason, you can’t stay at the Gothic quarter, ensure you reach the venue before the events begin and grab a corner with the best view. Since it’s open to public, getting the perfect spot is tough and needs a little bit of an effort.

To sum it up, if you’re the kind of person who prefers partying on the streets with the infectiously, crazy locals (of all age groups to be precise), dancing your hearts out to ‘Bella Ciao’ a thousand times, rather than in a dark club, under neon lights, on the same music as you do in any other club back home – plan that trip to Barcelona during La Mercè right freaking now!