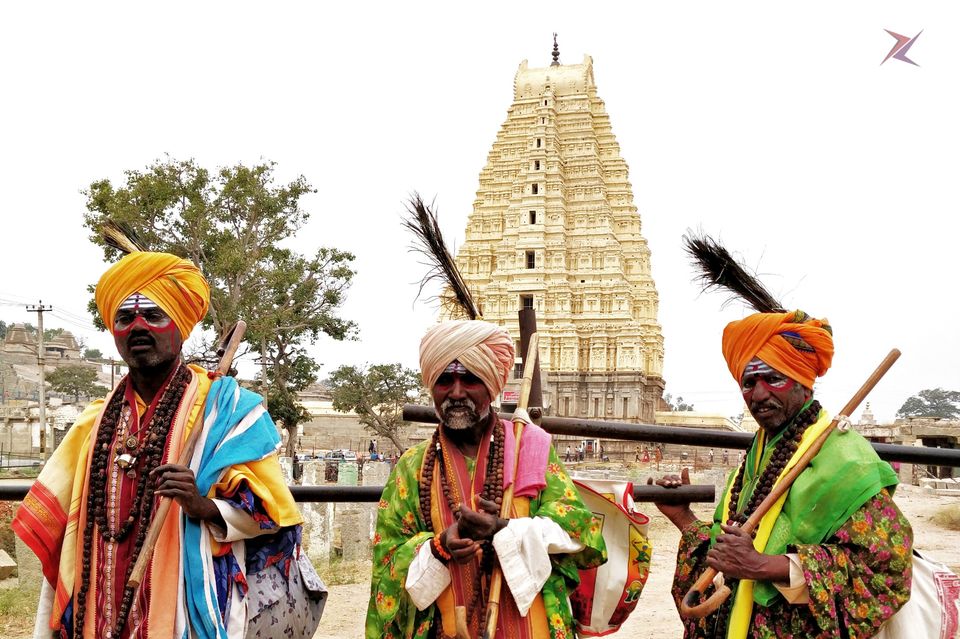 Hampi, a UNESCO World Heritage Site located in the central-east Karnataka, India. It was known as the popular center for the Hindu Vijayanagara Empire Capital in the 14th Century. In the 15oo CE, Hampi (Vijayanagara) was the world’s second largest medieval-era and India’s richest city. Traders like Persian and European travelers were attracted to this city making it more prosperous, wealthy and a grand city.

The Vijayanagara Empire was defeated by the Mughal Empire and they ransacked this place, destroyed many buildings and it was left abandoned. Later it was because of many western archaeologist and authors that Hampi gained significant interest across the world.

UNESCO’s World Heritage Site was conferred to Hampi in 1986.

Hampi is located near the Tungabhadra river, with numerous temples, farms and trading markets.

Air: The nearest airport to Hampi are Bellary and Belgam Airport.

Train: The nearest railway station to Hampi is at Hospet, which is 12.6 km far. There are frequent government buses and private auto running to and fro to Hampi.

Road: There are many private buses and state buses that run to Hampi. The approximate distance to Hampi from major cities is Hyderabad (361 km), Bangalore (372 km) and Hubli (162 km).

The best time to visit Hampi is between November to February. But it is more beautiful in the descending monsoon season between September to November, in case you want to see the more photogenic characteristic of this place.

In this article, we will visit some important attraction places in Hampi ruins. I have listed 18 places that you can explore on your next trip to Hampi. You can get an auto hired for your whole day, like 6-7 hours, to visit all these places around Hampi which will cost you somewhere from 800 – 1500 Indian Rupees (depending on the season and your expertise to bargain). But if you have a healthy lifestyle, you can rent a bicycle or just walk to a few of the places as they are in and around 5-6 km of range. I won’t suggest renting a bike as what I was quoted it was better hiring an auto, but yeah sure go ahead and find some good deals if you can.

So, Let's get started on our exploration to this lost city! 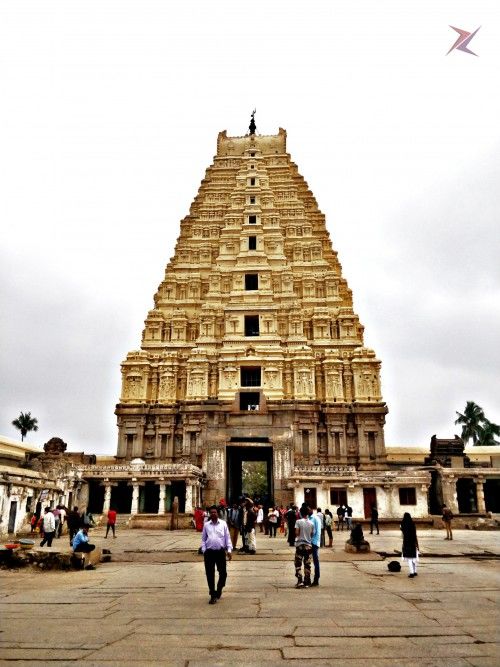 Virupaksha temple is very close to Hampi Bazaar like you can see it from anywhere from the bazaar area. The temple was built by Lakkan Dandesa, a chieftain under the rule of Deva Raya II of the Vijayanagar Empire. The temple is dedicated to Lord Shiva. And in case you have witnessed the beautiful elephant bathing at the banks of Tungabhadra river, she is Lakshmi, the royal elephant of this temple.

Don’t miss: There is a small dark room inside the temple where you can see the inverted shadow of Gopuram (entrance of the Virupaksha Temple).

Once you are done watching the temple you can head to a small elevated mountain like area on the left of the temple entrance. There is a Jain Temple and the place is also popular for people to chill and watch the sunset, but it is not one of those dedicated sunset points in Hampi. 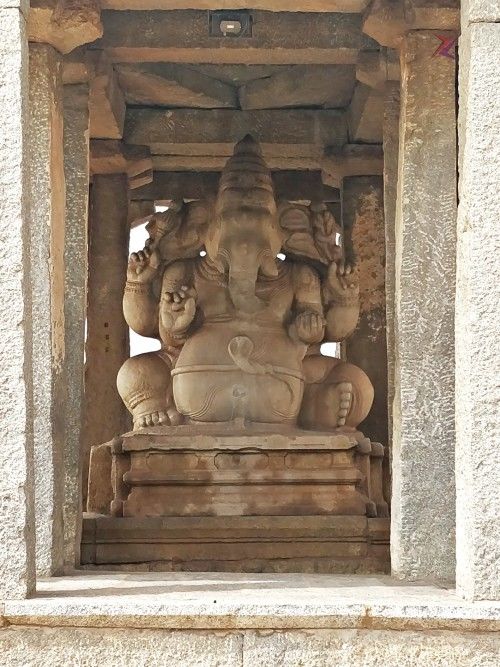 Coming down from the other side of the temple you will reach to the open pavilion of the Saasivekaalu Ganesha. The idol is carved out of a single boulder which is about 8 feet (2.5 m) tall. 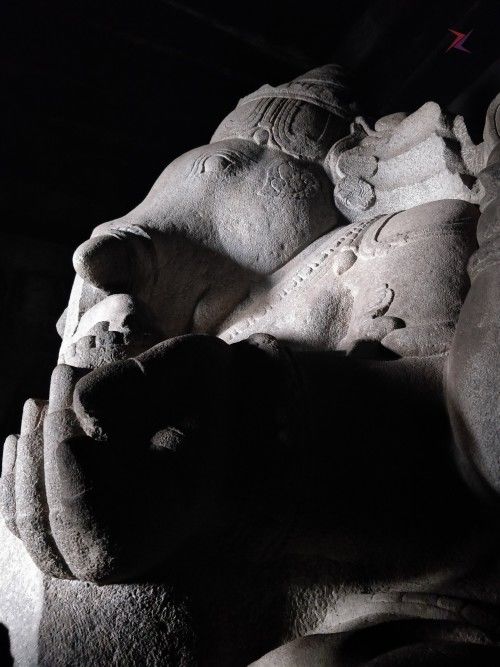 Just at 170 m is Kadalekalu Ganesha temple. This remarkable monolithic statue is one of the largest statues of Lord Ganesha in the southern part of India. This statue is 15 feet (4.6 m) tall. The idol is not worshiped anymore as the belly of this statue was broken during the war of Mughal invasion. 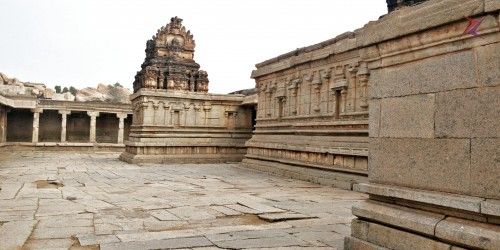 Another walk of 280 m from Kadalekalu Ganesha is Sri Krishna temple. This temple was built by the ruler Krishnadevraya in honor of victory against the battle with Utkala or the eastern region of Udayagiri, now know as Orissa. It is an abandoned temple and the idols are kept in the Hampi Archeological Museum including all other idols of many temples. 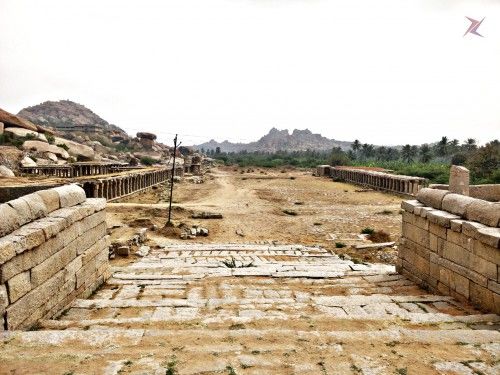 Outside the Krishna temple, you will see Krishna Bazaar. In the old times, this place was a market just opposite to the temple, maybe for fruits, flowers, and vegetables. The best part of this place is, if you are a good imaginer, you will be able to imagine a huge market full of people buying and selling various things in the old times. 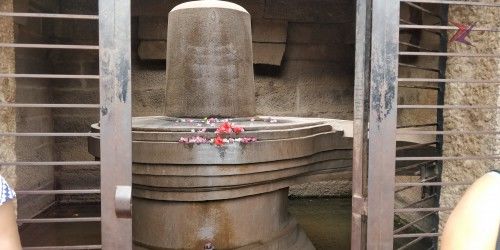 Badavilinga temple is a 3m tall monolithic Shiva linga surrounded by a small pool of water. This is 280 m from Sri Krishna Temple. 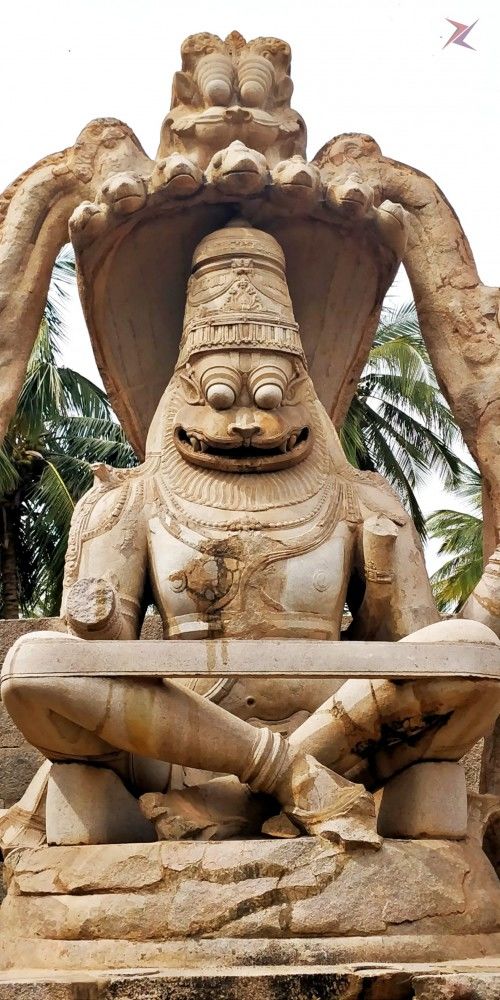 Just next to Badavilinga temple is the famous Lakshmi Narasimha temple. It is the largest monolithic statue in Hampi with a height of 6.7 meters. The statue of Narasimha sits on a coiled Adishesha, the king of all snakes and goddess Lakshmi sitting on his lap. But the statue of goddess Lakshmi was vandalized and mutilated in 1565 A.D. during the raid by the Mughals. The limb of Goddess Lakshmi can still be seen resting on the back of Lord Narasimha.

Just after Sri Chandikeshwari temple is Sri Uddana Veerabhadra Swamy temple. The temple has the largest statue of the demon king Veerabhadra, an incarnation of Lord Shiva. 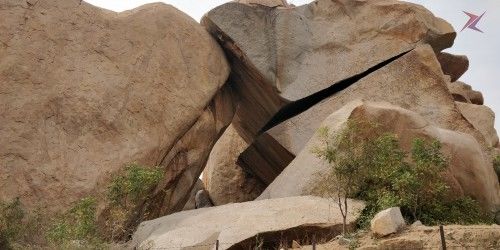 From there after 1 km, on your right, you’ll see the famous Sister stones, locally known as Akka Tangi Gudda. These are two gigantic rocks. It is said that two sisters, who after exploring the whole of Hampi, exhausted and sat here and started to bad mouth Hampi village, saying there is nothing in Hampi except boulders. A sadhu overheard them and cursed both to become rocks. 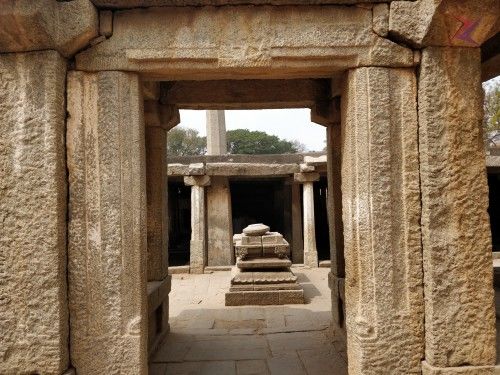 This place is around 450 m from Sister Stones. The temple of Lord Shiva which is not exactly underground but the roof of the temple is at the level of the ground. This temple is also known as Prasanna Virupaksha Temple.

This was the largest watchtower to the Danaik’s Enclosure. This is 300 m from Underground Temple. On the opposite side of the tower, you’ll see an entrance to the ancient mosque. 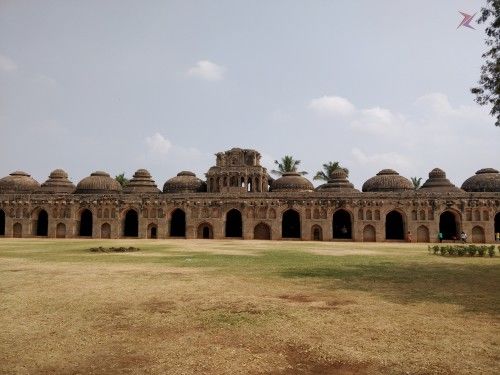 From Mohammadan Watch Tower, 650 m ahead is Zanana Enclosure where royal women once lived in this walled compound. This place has many other historic places to visit inside the enclosure. You must buy tickets to enter the enclosure which is 40 Rupees for Indians and 600 Rupees for foreign tourists. Do not throw away the tickets, as the same ticket can get you in the Vittala Temple later. Inside Zanana Enclosure is Lotus Mahal, Elephant Stable, Parshwanatha Jain Temple, Madhava (Ranga) Temple, and Ellamma Temple. 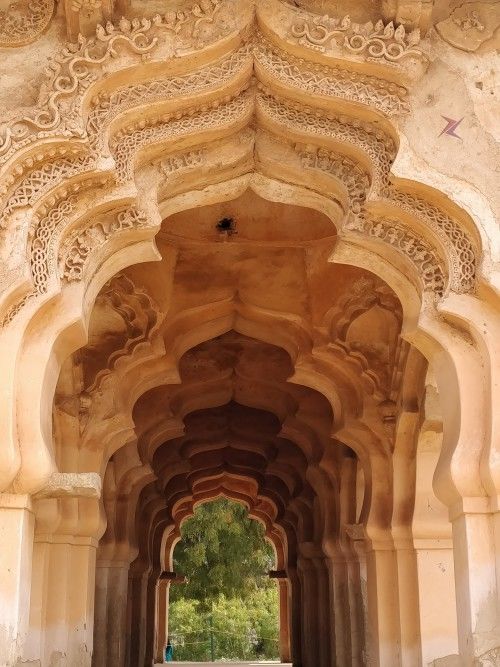 400 m away from Zarana Enclosure is Harara Rama temple. This famous temple is dedicated to Hindu Deity Lord Rama. The most famous or known thing about this temple is, it has the whole Ramayana depicted on the walls of the temple.

This place was like an Amphitheatre for the kings of Vijayanagara. This place is believed to conduct all the important events in front of the king and the people of the state. This place is 350 m from Hazara Rama Temple. 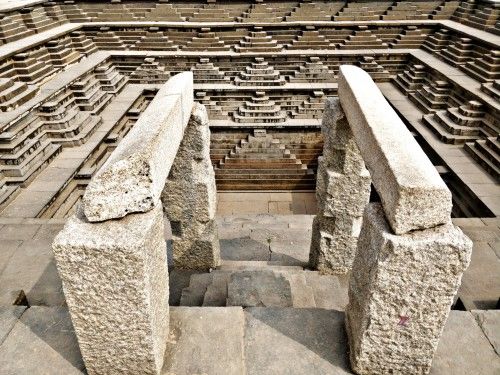 Inside Royal Enclosure is Public bath or Pushkarni, probably you have seen in many photos of Hampi or also in few movies. It was a beautifully constructed step well for people to bath during that period. The most fascinating thing that I observed was their pipeline system. The way they used to direct water into the Pushkarni. Do have a look at these stone made water system. 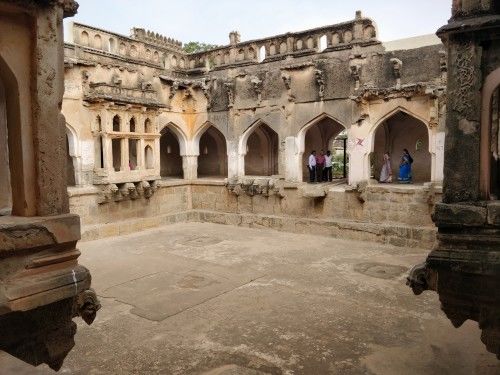 From the Royal enclosure, 700 m away is Queen’s Bath. As the name suggests, this place was for the royal queen to take bath. The place was constructed in such a way that none of the outsiders could see inside the building. 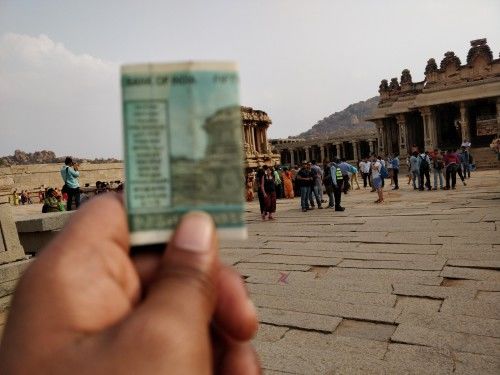 This temple is at a long distance from the Queen’s Bath, around 5.5 km from there. But 2.3 km from Hampi Bazaar, on the opposite route to where we started.

It is one of the most famous temples in Hampi and has important monuments to see like the popular Stone Chariot you will find behind the 50 rupees Indian currency and the musical pillars. The temple is known for its 56 pillars which when struck with thumb produce musical notes as SaReGaMa.

And remember, the tickets you bought at the Zanana Enclosure will be used here also (if you lost it, you must buy again).

So, this was the major attraction points you could explore in the city in a day. Apart from these you can also visit Sugriva’s Cave and end your trip at Matanaga Hills, one of the most popular places to witness sunrise and sunset in Hampi.

This is not it. There is a lot more to Hampi. On the other side of the river Thungabadra is a small town, Virupapur Gaddi, very well known as Hampi Island or Hippie Island. Do read my next article on Hampi: On the Other Side

Also, do let me know if you have any questions or suggestions.

Happy reading and and keep XPLORing...