New York - There and back again 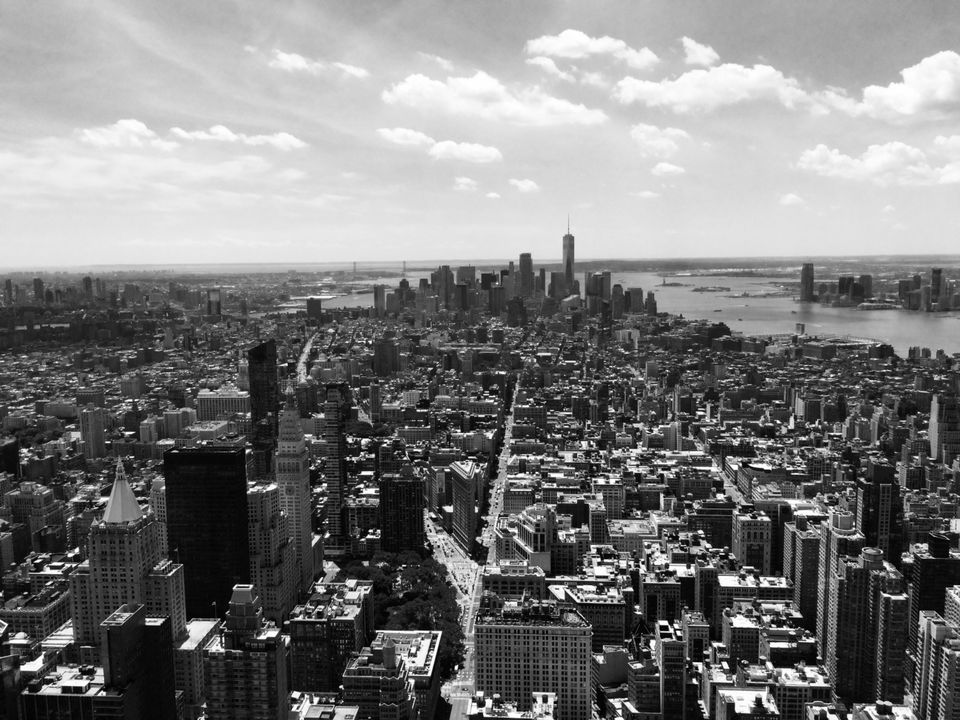 Rarely does one stumble across moments in one’s life that take the air out of the room leaving one totally quiet to rethink everything they might have learnt until that point in time.

If I told you that there is a city where you could learn the obscurest of your hobbies, what would your response be?

If I were to ask you to name a city that imbibed every single culture known to mankind without losing its own charm, one that dazzled every first timer at first glance, what would your answer be?

Unless you’ve been living under a rock, you know I'm talking about New York city aka NYC, The Big Apple, The city that never sleeps.

Since it is an eclectic city, you tend to bump into people from mixed backgrounds which is something I love about travel. On one of my brisk walks on a dusky day, I ran into this gem of a gentleman.

The purpose of my story is to walk you through this emotion. I hope I can atleast try to do complete justice to this culturally diverse urban miracle called NYC. To explore this city, one must think like a new yorker or as the world fondly likes to call ‘em Yankees. Let me dispel your confusions once and for all and tell you that New York city is a part of New York state. NYC is essentially a cluster of islands called boroughs.

There are five such boroughs in NYC namely Manhattan, Brooklyn, Queens, Bronx and Staten Island along with Long Island (not a borough but an island nonetheless that is a part of NYC). That being said, Queens is the largest borough and Manhattan, the tiniest. Each of these boroughs can be further broken down into three districts - uptown, midtown and downtown for ease of reference.

I am gonna share every basic info you might need to get you started on your journey. I am gonna start off with what places to visit, how to visit and lastly where to placate your ravenous appetites once you have explored the city.

Before I share addresses, it's crucial for you to understand that NYC's urban planning is meticulously organized into a grid system. Avenues are roads that run vertically north to south while streets run horizontally east to west. 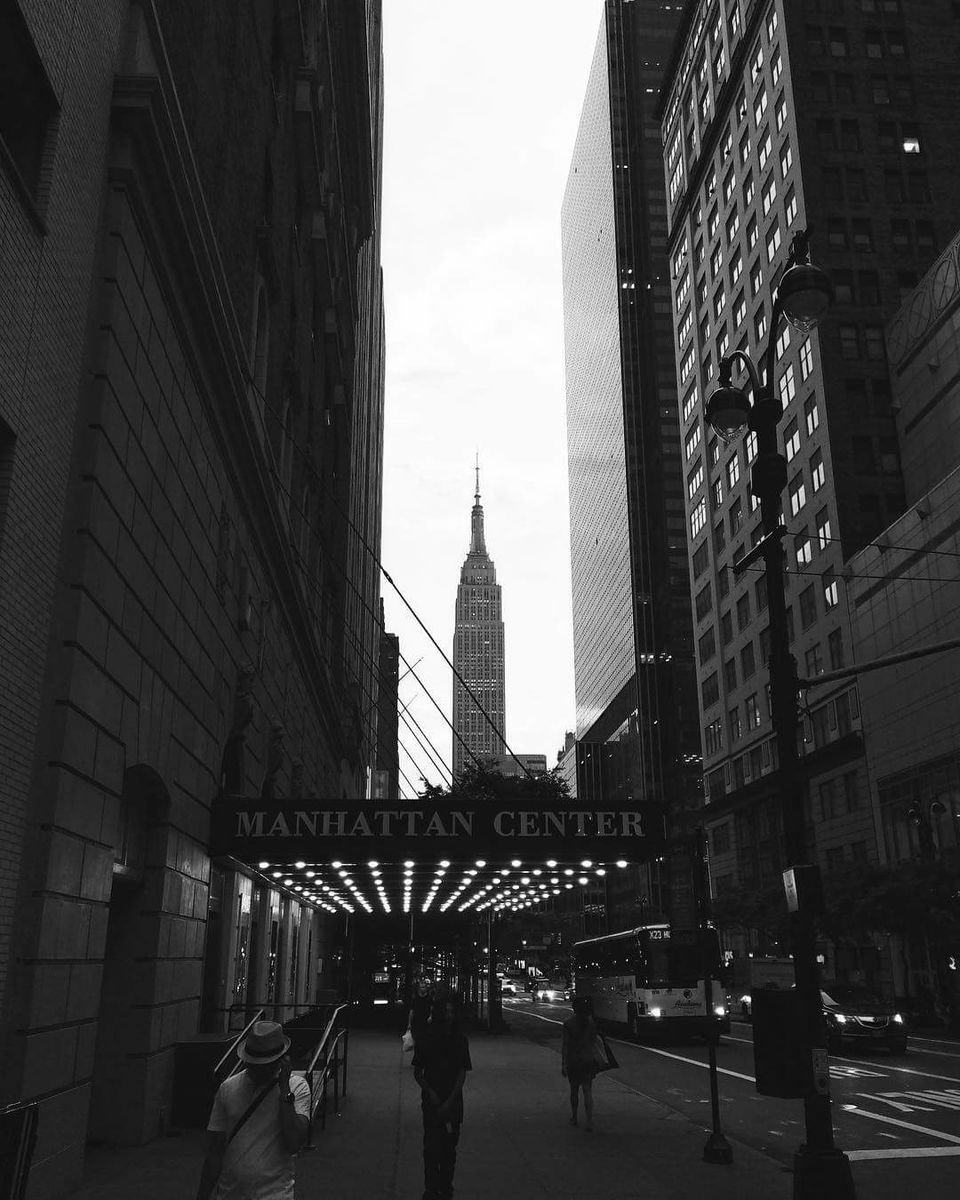 Built in 1931 standing 1454 ft. tall, this 102 storeyed building derives its name from Empire State, a nickname for New York state. This building that was created during a race to create the world's tallest structure enjoyed that status in the world between 1931 and 1970. In 2012, the ownership installed computer driven LED lights on the tower that is capable of displaying 16 million colors which can change instantaneously to recognize occasions and light up accordingly. Having featured on countless movies and TV shows, it'd be a sin to miss this attraction. 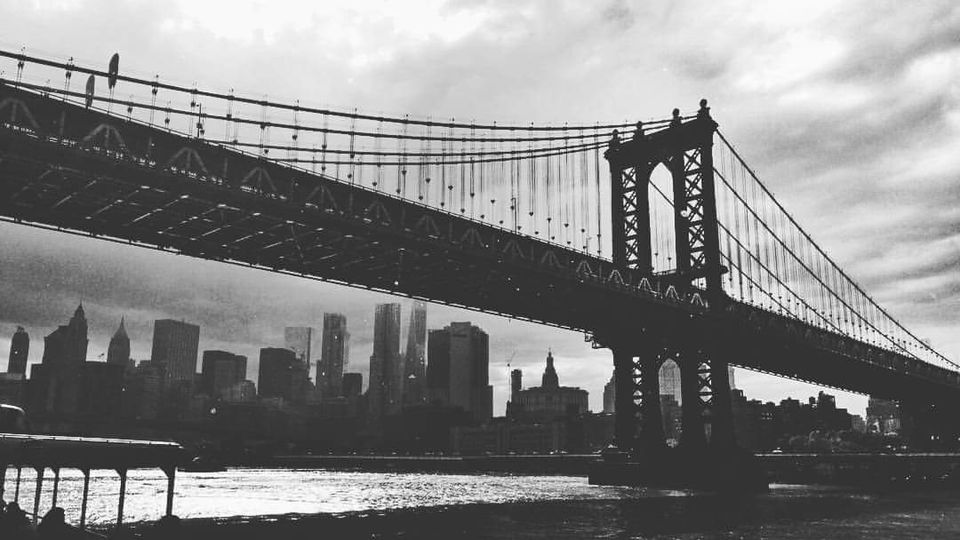 Cruising along the East River all the way to Hudson offers a panoramic view of Manhattan's skyline with a shot of Jersey city, Ellis Island, Brooklyn and Bronx. These cruises are the best way to cover a lot of ground for those with limited time on their hands. Now, there are speed boats too that help you cruise at the speed of light. There are plenty of cruising companies but the one I recommend is Circle Line Sightseeing Cruises. Their guides are funny, effective and service is right on the money.

The Metropolitan Museum of Art 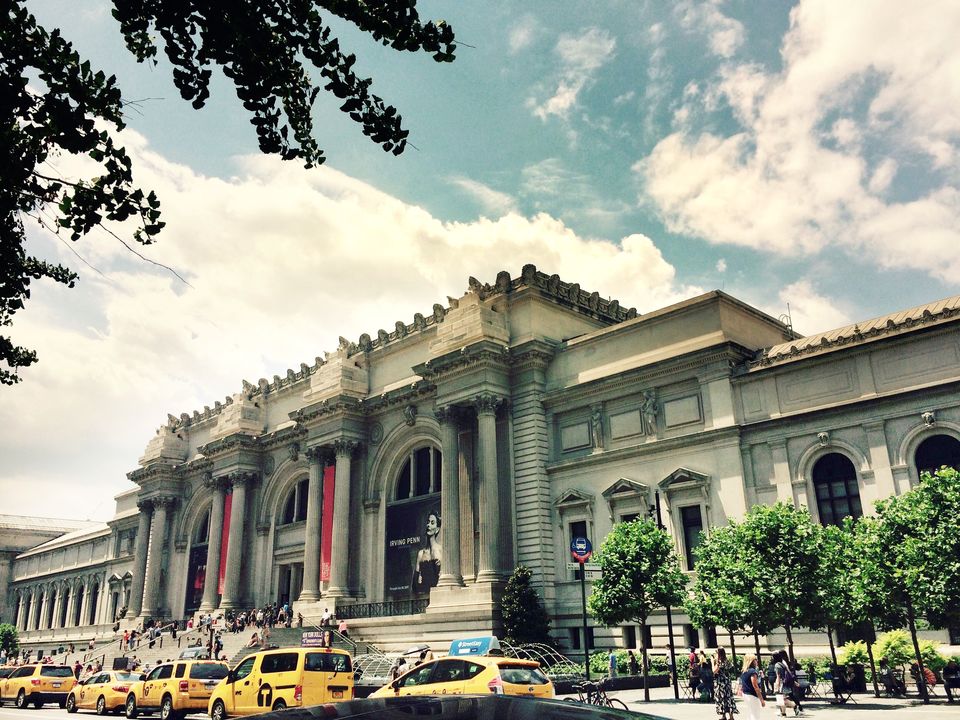 It's MET, not Mets. Sorry for the FRIENDS reference there. A big shout-out to lovers of history and art. This is where past meets present. From the magnificence of the Roman empire and the savagery of the Mongols to the artful Renaissance, this museum is steeped in timelessness.

Price: Pay as you prefer 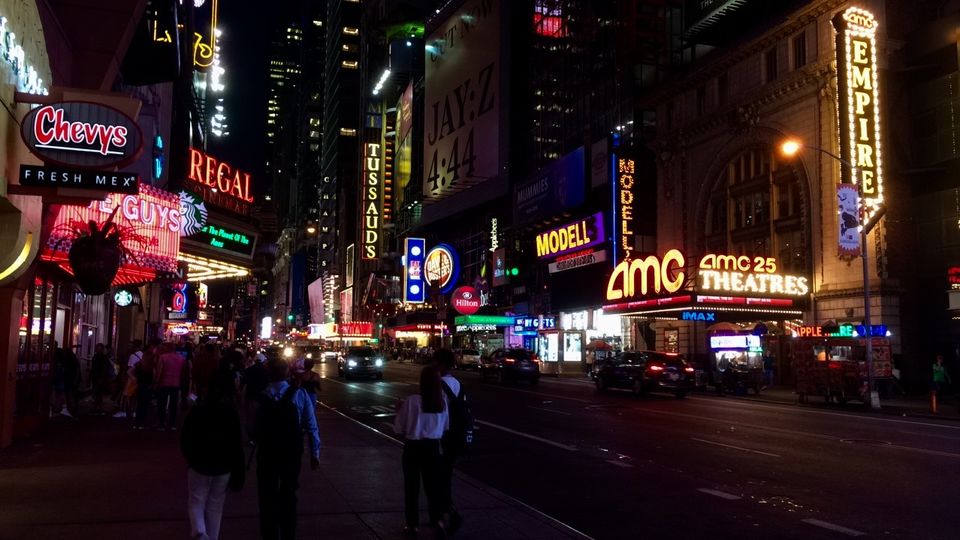 Located in the heart of Manhattan,, this nexus of diversity is beyond a doubt the tourist capital of the world. With its towering presence, colorful jumbotrons and liveliness, Times Square witnesses visitors from all walks of life. You don't do anything at Times Square but just look around and bask in its glory. 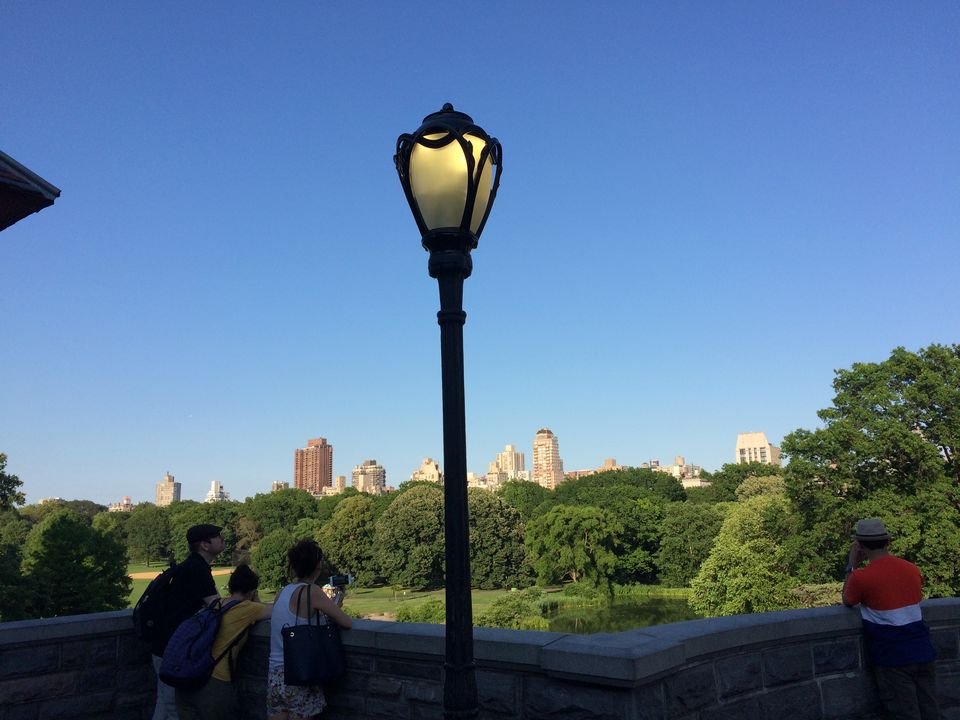 It has been an iconic landmark since 1962. Designed and built by landscaper, architect and writer, Frederick Law Olmsted and English Architect Calvert Vaux in 1858, Central Park is the largest urban park spanning 842 acres between the Upper West and Upper East side. Some fun things to do here would be to Rock the boat, Monkey around at the central park zoo, Get ready to ramble, People watch in sheep meadow, ice skate and hit the carousel at Woolman Rink. 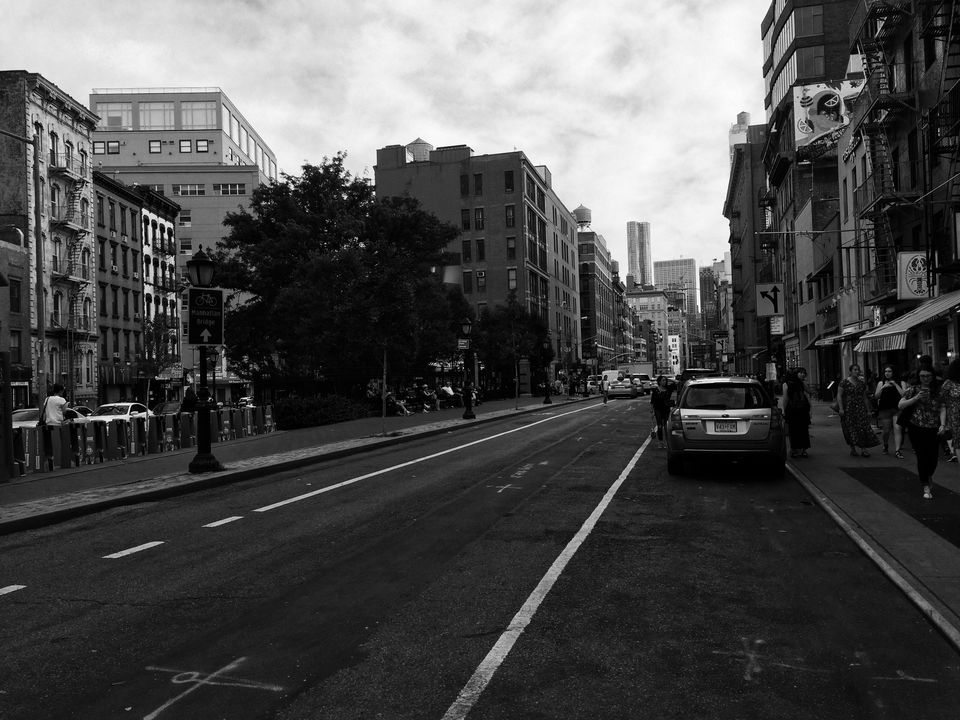 Shopaholics in the house, take note for SoHo boasts of some fancy chain stores and high end boutiques for you to choose your outfits. Five Points once infamously sheltered the gangs of new York. Now a tourist spot, five points derives its name for being the centre point where five streets converge. Little Italy and Chinatown harboured the largest population of these respective ethnic groups outside their own countries. Little Italy is often associated with the Mafia and the Godfather trilogy primarily because the streets once indeed belonged to them. 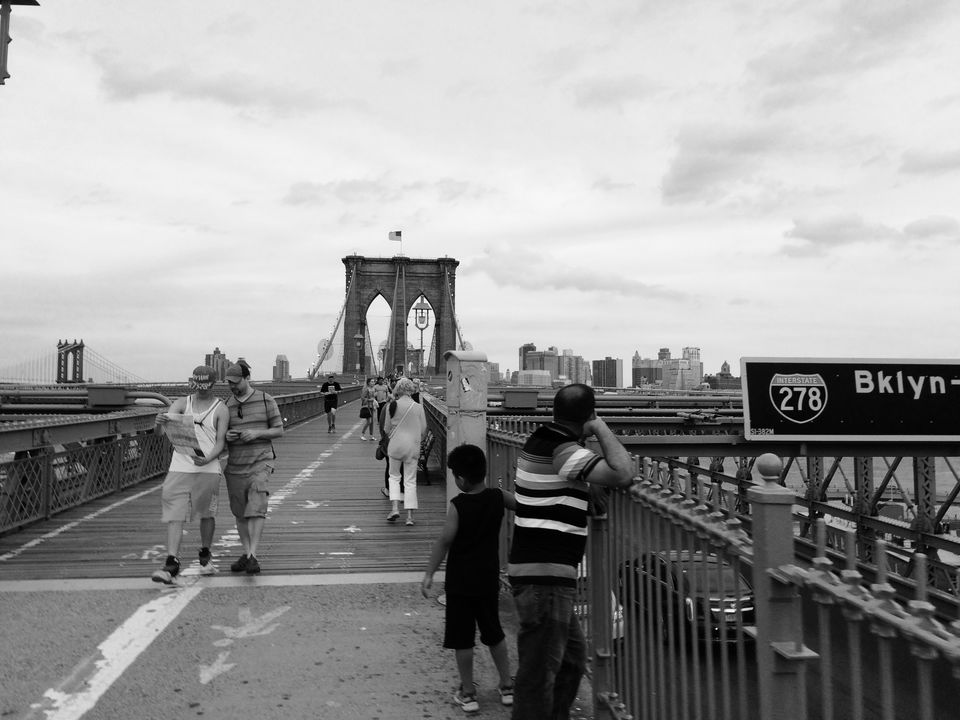 Built in 1883, this 1.6 kms long hybrid cable-stayed suspension bridge is one of the oldest roadway bridges in the United States and the first steel wired bridge to be constructed. It connects Manhattan to Brooklyn. There are two different lanes, one for pedestrians and one for cyclists. 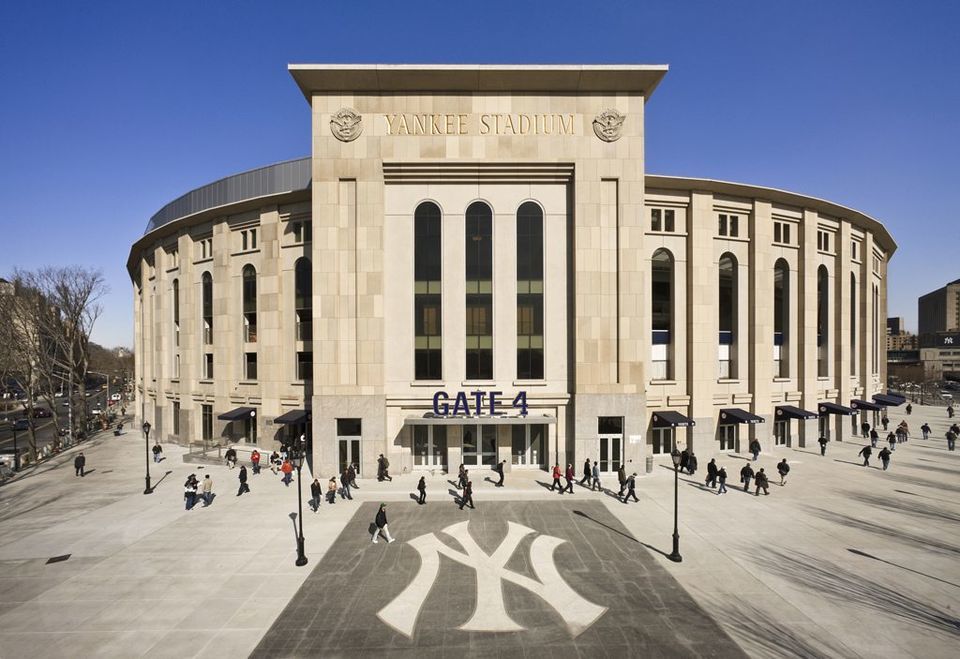 You ain't a true New Yorker till you have watched one of those exhilarating ball games at the renowned Yankee Stadium up on Bronx. Yankees are NY's beloved baseball team and to say that they command a religious fan following would be an understatement. 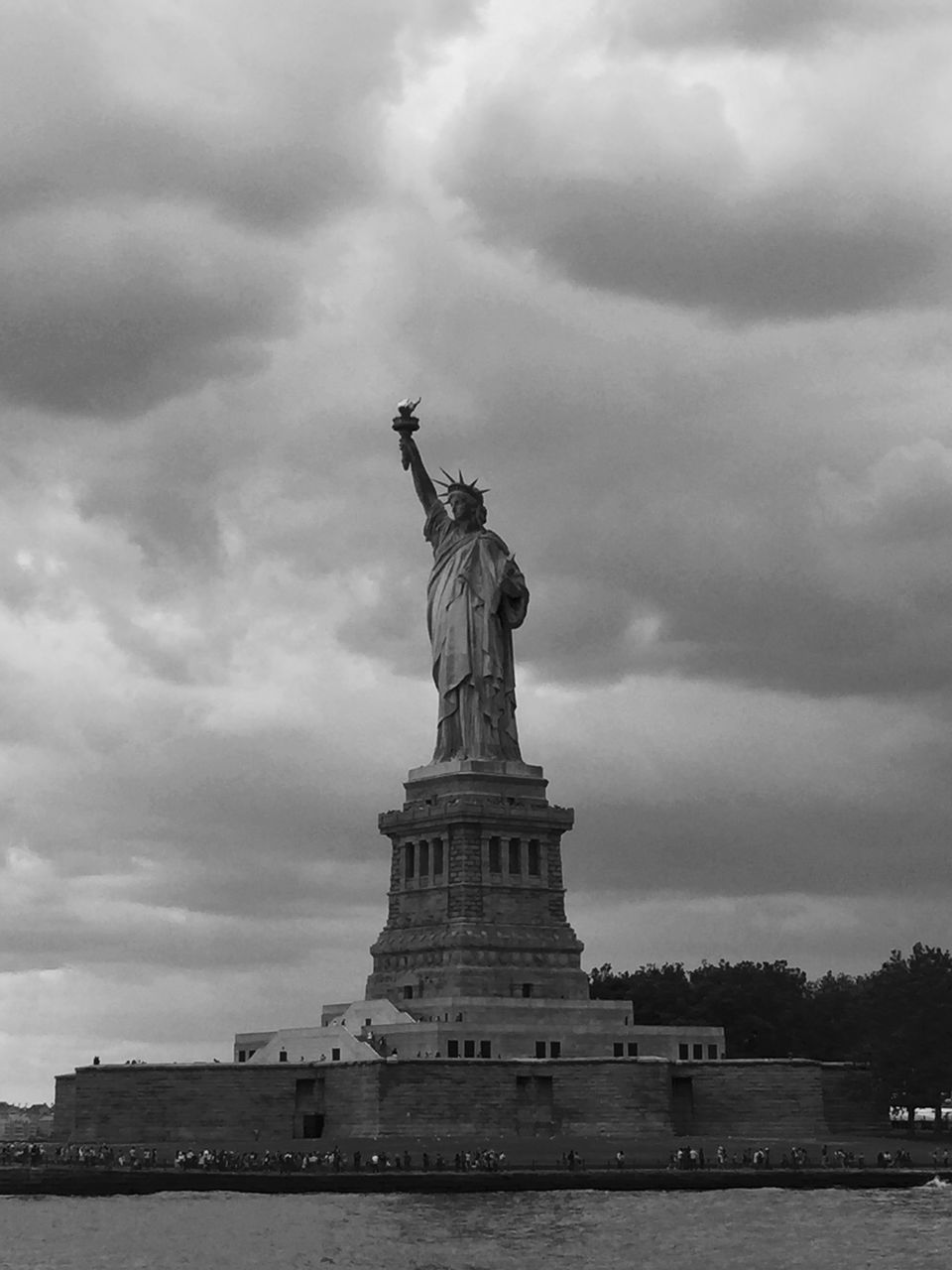 A neoclassical sculpture meant as a gift from France to America, was accepted by the president of the United States on October 28, 1886. This statue was originally meant for the Suez Canal in Egypt but like they say, "Someone's loss is someone's gain". Regarded as one of the wonders of this world, its sculptor, Frederic Auguste Bartholdi modelled this piece of work after his mother. 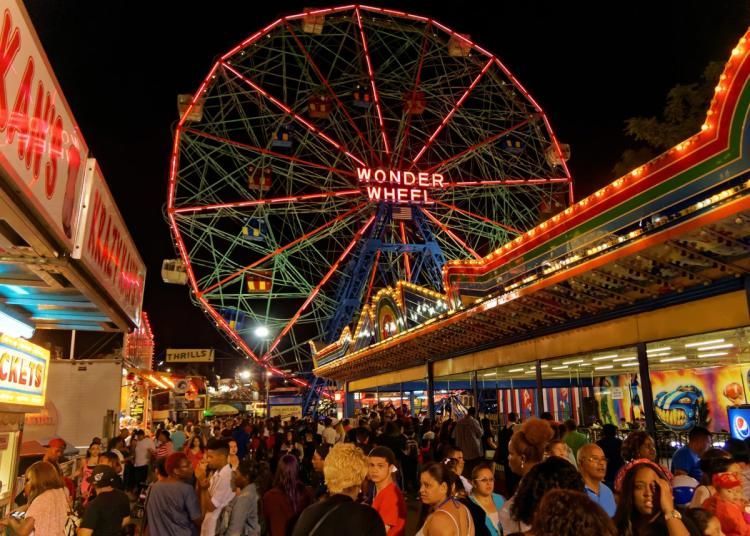 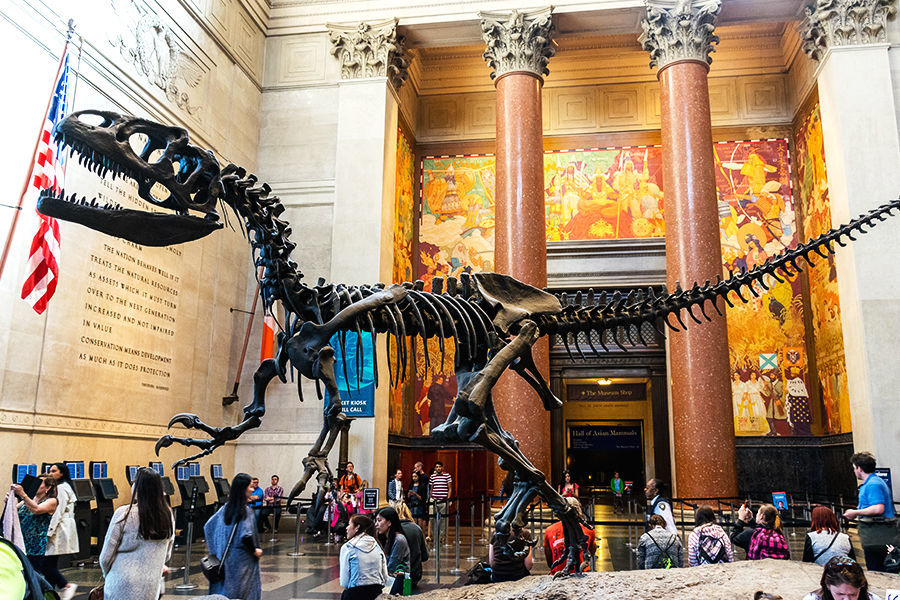 This museum is well regarded by visitors for its Dinosaur exhibits and well preserved historical artifacts. Touted to be one of the largest museums around the world and one with an immensely impressive collection. A truly bewitching experience for fellow travelers and history enthusiasts.

Price: Pay as you prefer. 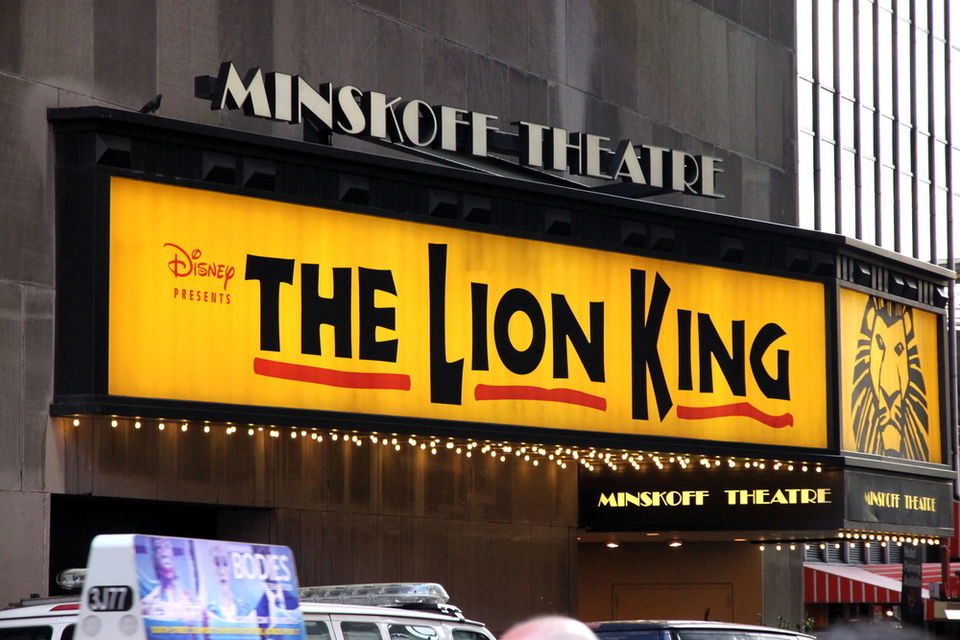 Who doesn't love films and where better to watch 'em than in one of these staggeringly gorgeous Broadway theatres! Their larger than life theatrical performances and gut wrenching intensity make up for an experience of a lifetime. The most famous of 'em all is the Broadway adaptation of Disney's The Lion King performed onstage live with actors, ominous instrumental music and some fantastic singing. 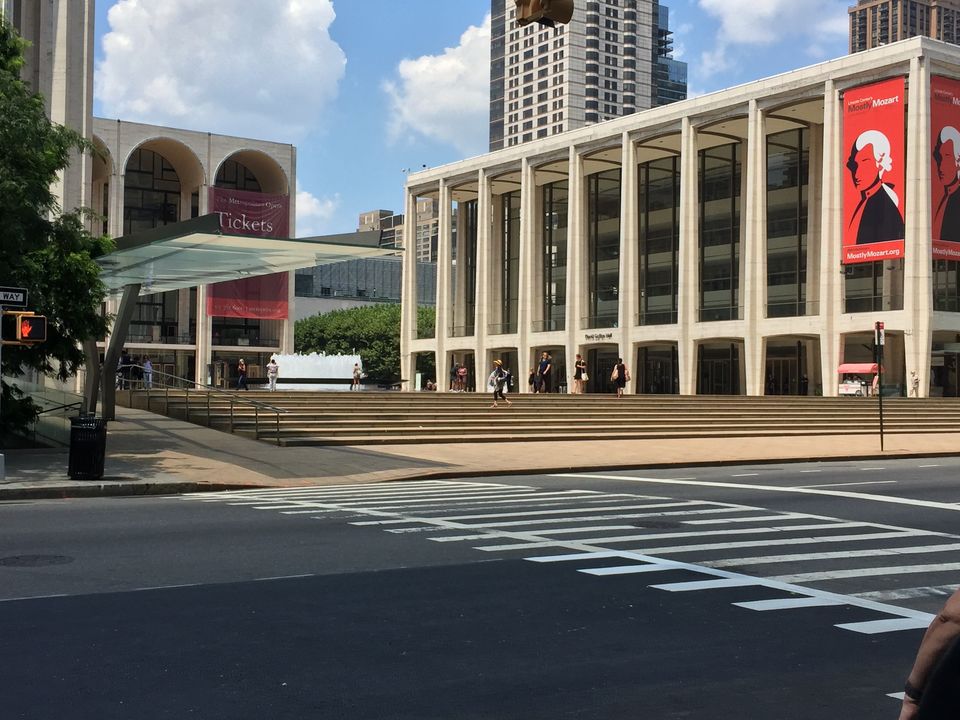 Instrumental in shaping the artists, this place is a breeding ground for aspiring musicians, dancers, actors, ventriloquists, singers and performing arts. Respected artists were commissioned to design major buildings in this site thus inevitably turning it into a major cultural hub. Brightest minds around the country flock this school to make it big. 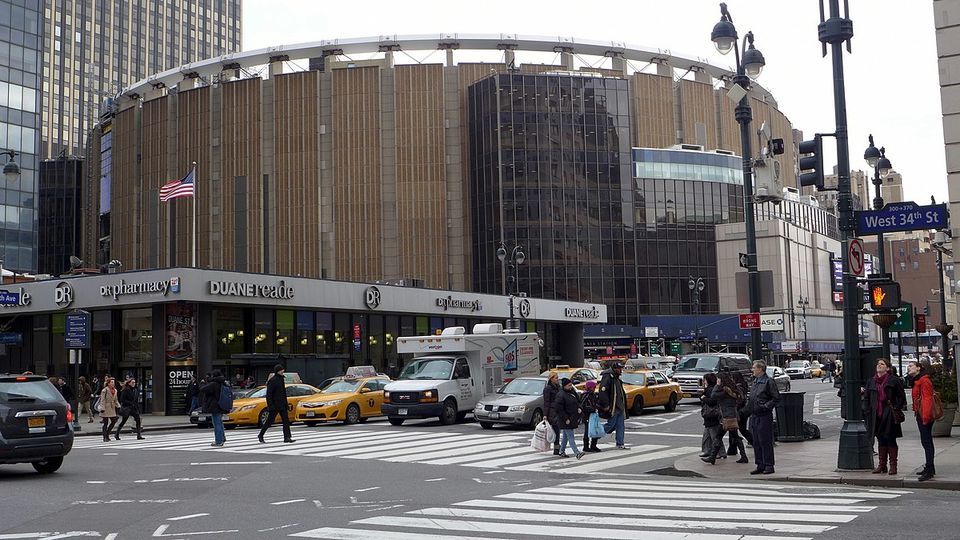 A groundbreaking indoor arena that can seat upto 20,789 visitors has hosted several events over the course of time. New York's Knicks game, the notorious WWE fights and Rangers game are some of the notable events to have taken place in this grand arena. After its construction in 1925 and closing in 1968, it was moved over to 8th Avenue from Madison Avenue. 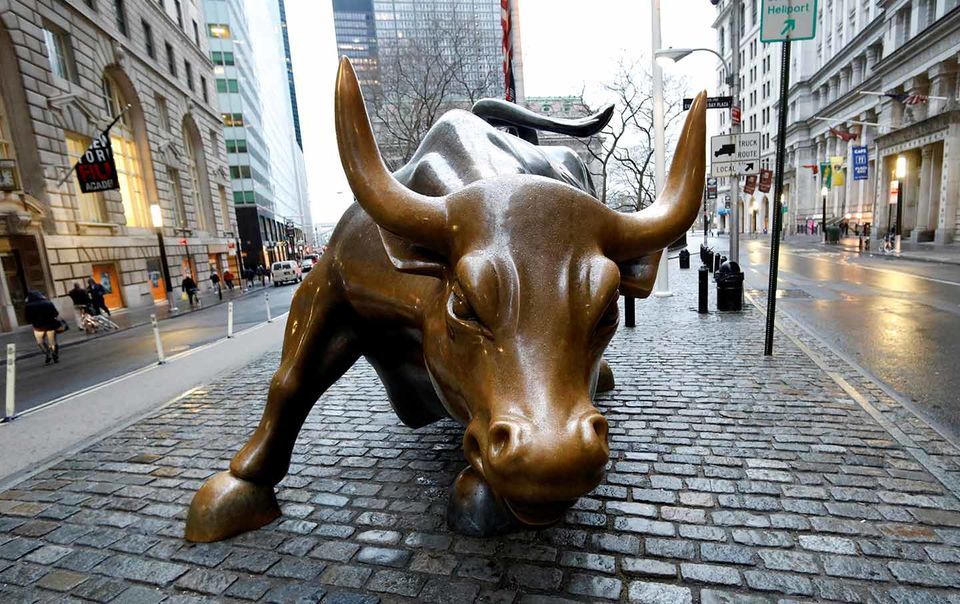 This money district where traders win or lose everything is the financial hub of NY. Working here is often associated with success in the minds of Americans. The iconic bull is symbolic of Wall Street. Interestingly, its inception has a different story to tell. The Wall Street was originally planned by the Dutch t0 keep away native Americans from gravitating into the city.

4. On foot (Lest you forget you're in the most walkable city on the planet)

A culture's experience is incomplete without wolfing down some food. So what are you? A meat lover? Sushi Snob? Pizza guzzler? Whoever you might be, don't beat yourself up. I've got you covered. Here you go. Mazel Tov!

So as to avoid burning a hole in your pocket, here are some websites that could help you with it.

On that note, I'd like to leave you with a quote to sum up my tryst with travel -

"We leave something our ourselves behind when we leave a place. We stay there even though we go away and there are things in us that we can find again only by going back there."

SPONSORED
Want to book a similar trip?
I accept the Terms of Use and Privacy Policy of Tripoto.
SPONSORED
Related to this article
Weekend Getaways from New york,Places to Visit in New york,Places to Stay in New york,Things to Do in New york,New york Travel Guide,Things to Do in Garden,Garden Travel Guide,Weekend Getaways from Garden,Places to Stay in Garden,Places to Visit in Garden,
Tagged:
#New York#New York County#United States#Kings County#Bronx County#museum#garden#nature#shopping#historical#historical#recreation#nature#shopping