In my short life, I’ve had two encounters with the Taj. While one was at that tricky age of 16, the other was at a slightly more befuddling 31 (does maturity really come with age?). Each visit is sharply etched in my mind, and I’m happy to see that by the second one, I seemed to have grown up a little. Or so I’d like to believe.

For most Indians, the trip to see the Taj Mahal is like a tiny pilgrimage. It’s after all the poster child of India, famed to be one of the Seven Wonders of the World. We grow up listening to the magical experiences of people who’ve been to this inimitable symbol of limitless love. On my first trip to the Taj, all of this was pretty much lost on me.

I recall being armed with a Kodak point-and-shoot camera, wearing a hideous blue tee-shirt identical to the ones worn by 40 other teenagers. It was a school trip with my batch mates. All of us had recently faced one of the biggest hurdles in our academic careers – the 10th standard board exams. We’d been slogging out butts off for over a year and now, were finally taking that well-earned break. The trip focused on a seven day trek in the Himachal hills and the visit to the Taj Mahal was just a tick on the North Indian itinerary.

And what a rotten time to pick for a trip to the Taj! It was the peak of summer, the sunlight glinting off the white marble made it difficult to see anything without squinting. People have to walk barefoot to get near the main dome but on this day, the tiled floor was so hot we had to make a mad dash for it. All we wanted to do was sprawl out under a tree and doze off in the gentle breeze. We weren’t interested in the back story; none of us had experienced true love yet. During the one hour guided tour, the only thing that made us pay attention was the barbaric folklore of how the hands of master artisans were chopped off so that no one could replicate the majestic Taj ever again.

We’d brought packed lunch from Delhi. It was made by our school cook at the crack of dawn and had been emanating promising smells on the four-hour bus ride. By the time it was lunchtime however, the food was stinking so ferociously that even rodents steered clear of the dustbin! The heat had been too much for the poor fried rice. Our fiscally prudent principal was in a fix, but made a stupendous, last-minute recovery with some packets of chips and flavoured milk.

As we left Agra, I felt a pang of dissatisfaction. I vowed to myself that I’d be back some day.

Now, almost 15 years later, I had once again come to Agra. This time around I was with family – N, his brother and my dear friend who’s married to N’s brother. We’re all shutter-happy people, so we had four cameras of differing capabilities to make some memorable pictures. We drove to the place where you have to park your cars, about 2 km away from the main grounds. From there, you can either take a ride in an eco-friendly electric rikshaw or ride along with an uber-friendly horse cart.

Is it a surprise that we chose the horse cart ride? Our awesome steed, Sajaan, was quite a cute fella. His owner claimed that Sajaan was super busy during the peak wedding seasons. North Indian grooms are notorious for riding up to the mandap on a beautiful stallion. Who can blame them? There’s probably no other way to match up to the gorgeousness of the brides. But I digress.

After a full-body search, we entered the sprawling compound. While my troops lingered around, I was impatient to get a first glimpse. When we entered the main archway, I remembered something the guide had told me all those years ago. If you stand directly facing the Taj and walk briskly towards it, the building appears to move back, and shrink in size. And, if you back away quickly while still looking at the Taj, it grows steadily and comes closer to you. This delightful quirk of the architecture was interpreted by our guide, “when you gallop towards it, the Taj bows and welcomes you but when you try to run away, it rushes forward and says ‘don’t leave me’!”

Over the years, Shah Jahan’s ode to his precious wife has turned a mild shade of yellowish-cream. Despite this unfortunate reality, it is one of the most enchanting buildings on Earth. When you see it across the water canals and lush green gardens, its hold over you intensifies. You cannot run away from it, if anything, you almost never want to leave.

The Taj Mahal’s beauty stunned me, I felt paralyzed. How do I capture an authentic bit of what I see and feel in a few photographs? How can I translate this inexplicable sense of wanting to get closer and yet being afraid of missing out on seeing it whole? Of wanting to touch the perfect reflection in the still water? Of being overwhelmed by the sheer scale of the art that has witnessed the turn of over three centuries? How do I convey the delicate, gossamer dreams carved out of Makrana marble? The peace and serenity that I feel here?

Eventually, I realized it was my only chance, so I had to try my best. The pictures in this post aren’t entirely satisfactory, but someday I hope to get another chance to improve on my humble attempt.

Seeing the Taj with grown up eyes was a gift. Having lived through some of the highs and lows of love myself, I think I better understood the creation this time around. When you see the Taj, you can’t help but think about how deeply the emperor had loved his sweetheart, and how inconsolable his grief must have been to inspire this final resting place for her.

Tagore perhaps interpreted it best when he wrote, “let this one tear-drop, this Taj Mahal, glisten spotlessly bright on the cheek of time, forever and ever.” 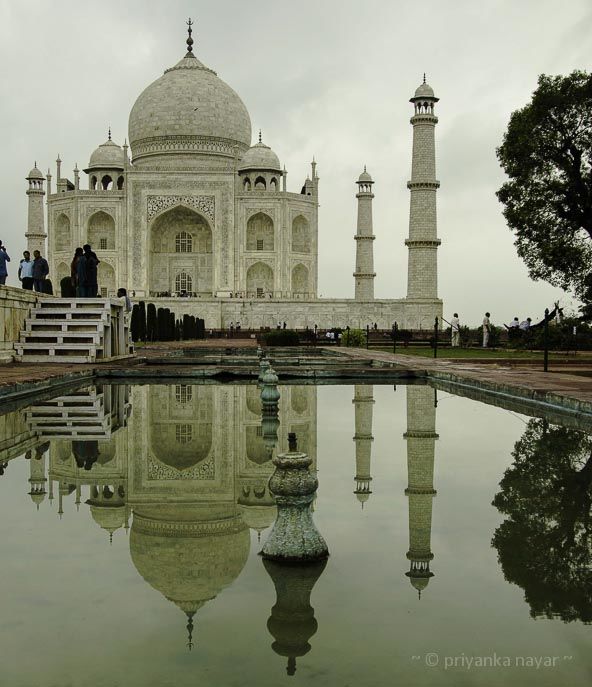 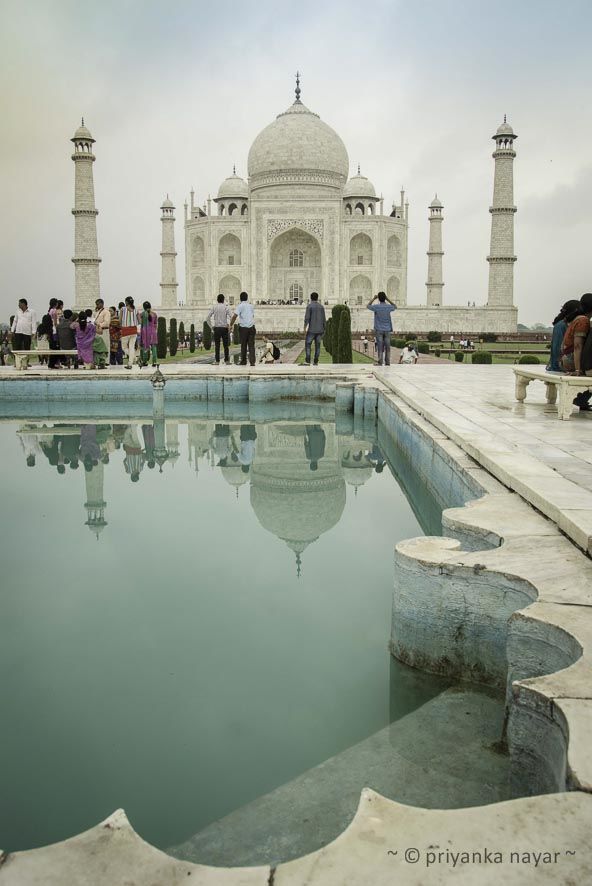