A Love Letter to Kaziranga*.

Oh Kaziranga, sweet love, I have been lured by your temptations for since ever!

Aren’t there some places that just feel like home? Ever since I could understand emotions, Kaziranga has always been happiness for me.

Draped in unimaginable shades of green and engulfed in an unwavering wilderness that spreads acres, the Kaziranga National Park in Assam, India, is definitely a piece of heaven! It is however world famous for being the only natural habitat to the world’s last remaining species of the Greater One-Horned Rhinoceros, which earned it the prestigious UNESCO World Heritage Site tag and proudly maintains so since 1985.

The sight of the interestingly splendid rhinoceros grazing in the signature grasslands, often solo or an epic mother and child, and always familiarly accompanied by a herd of deer, is frequent and spectacular. With the National Highway curving right along the borderlines of the national park, it is not hard to miss these endangered species at a safe distance and careful surveillance. Often uniformed forest guards perched close-by is only a recent edition, in the light of rising poaching activities. It makes daily headlines!

A Rhino in its habitat. Shot by Priyanka Sarma. 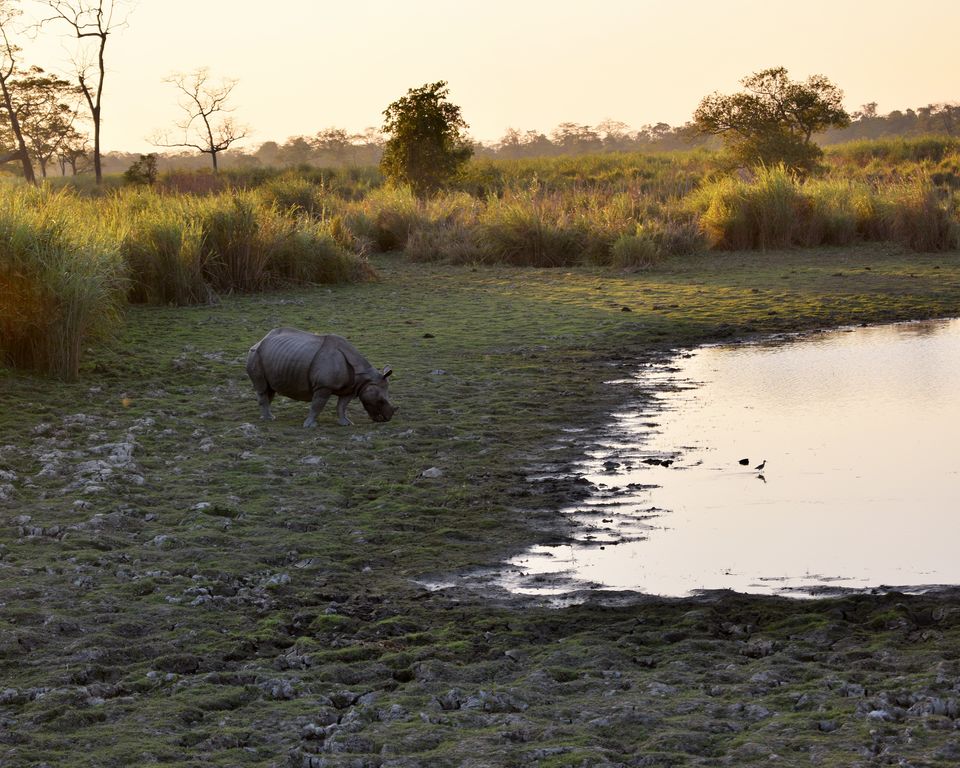 With increasing poaching activities, currently a few conservation groups along with the government have been taking actions of awareness and control but the life of these endangered animals is still a threat with their dwindling numbers, 2,483 rhinos (as per 2018 census). A state treasure, Rhinos are brutally hunted down for their horns. The need for extensive global pressure and strict laws against poaching are the most necessary and the least we can do as individuals is to raise awareness.

The best kind of beautiful

Clothed mostly in tall elephant grass, with the mighty Brahmaputra River lazing in the periphery, Kaziranga is known to host varieties of fish. Attracted by the river and the luscious wild, several migratory birds flock here in season, earning it the title of an ‘Important Bird Area’.

On the opposite side are the hill ranges of Karbi Anglong, a dreamy cloud tinged marvel in the monsoons. They stand like sentinels to the territory, dedicated bodyguards to the precious!

A beel inside the National Park 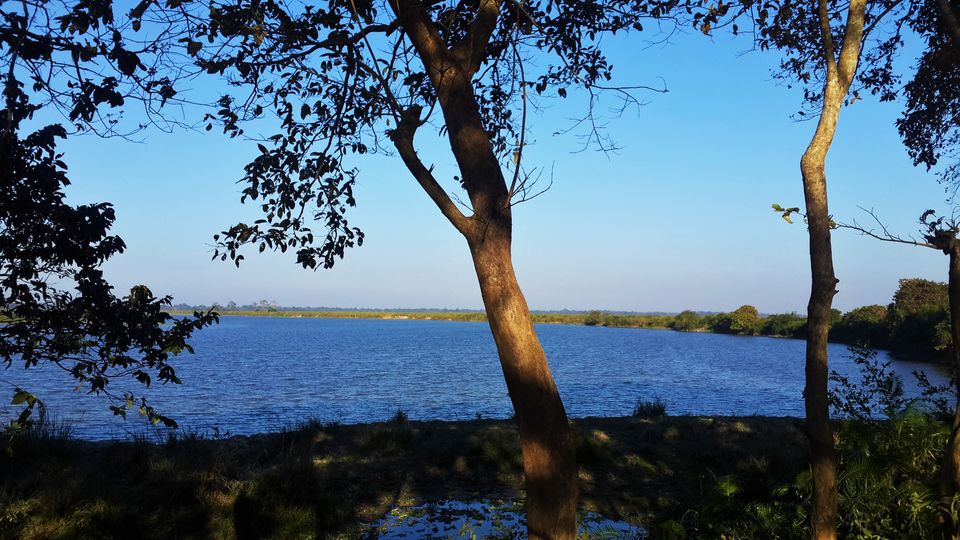 The slopes on particular border pockets of the park are delicately crafted into tea gardens since the Colonial era. Modern day resorts dot the barren lands by the highway where civilization strives, boasting of hefty views and a taste of the wild.

Sneak-Peak into the Vitals

430 square kilometers (approx), covering the Nagaon and Golaghat districts of Assam, and bordered by the Karbi Anglong Hill ranges.

· Hosts world’s two-third of the of Greater One-Horned Rhinoceros.

· Supports the highest density of tigers among the total protected areas worldwide, which has enabled it to become a ‘Tiger Reserve’ since 2006.

. Hosts 15 threatened species among its chief fauna, including the last viable population of the Eastern Swamp Deer and the largest population of Wild Water Buffaloes in the world.

A buffalo blocking our tracks! 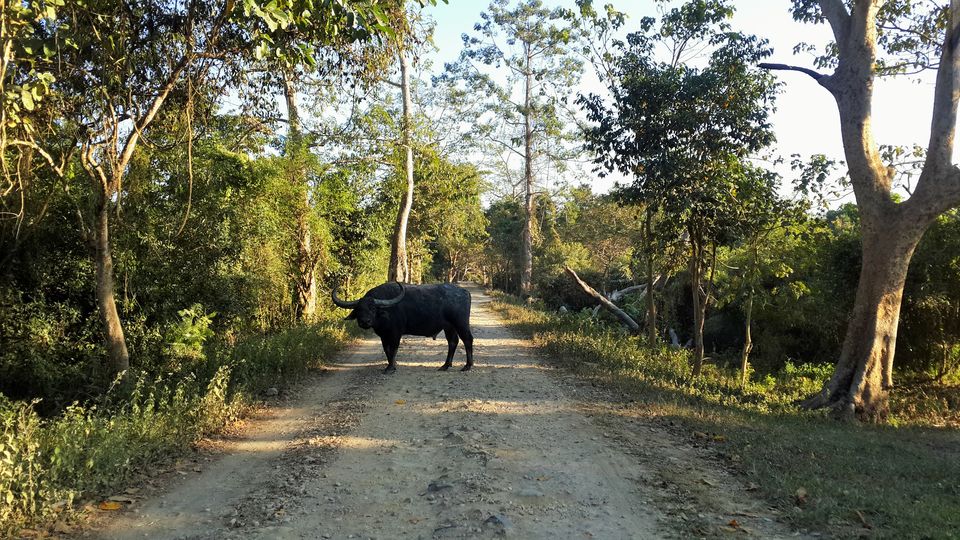 · The park has a good number of the Asian Elephant population (1,940), and the majestic animals can often be seen moving about in herds through specific areas marked as ‘Elephant Corridors’.

· Other interesting animal varieties include the Indian Civet, Assamese Macaque, Hispid Hare, Indian and Chinese Pangolins, Sloth Bear, Capped Langur and the Hoolok Gibbons, among others.

· The Lesser White-Fronted Goose, the Pallas Fish Eagle, varieties of stork, and the Asian Openbill are some among the bird species found in the Kaziranga wilds.

. The King Cobra, along with the world’s largest pythons inhabit the wilds of Kaziranga.

The Kaziranga National Park brags the title of ‘Biodiversity Hotspot’ because of the diversity and visibility of wildlife. 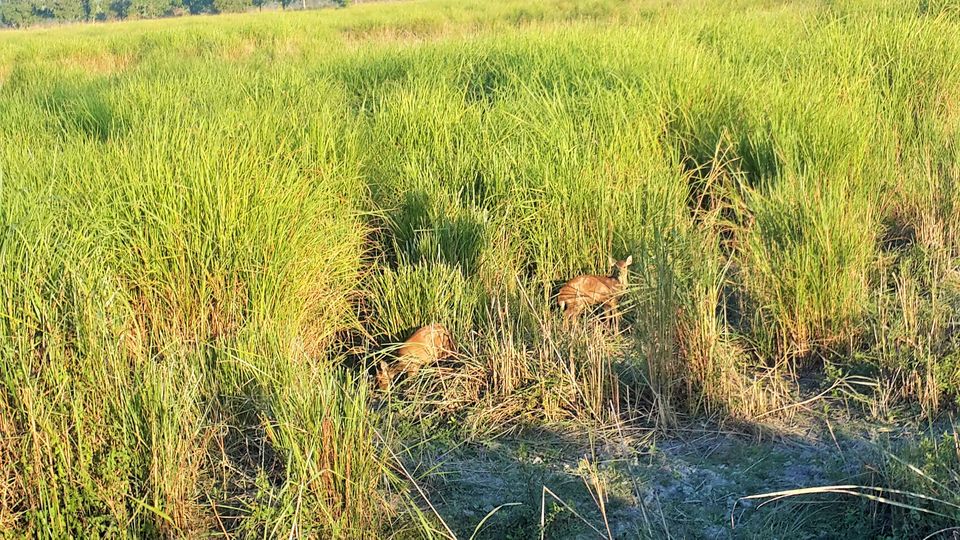 During the Indian monsoons, especially in the month of June, July and August, the Western region of the Kaziranga National Park remains underwater due to the rising flow of the Brahmaputra River. Therefore, the National Park only remains open to visitors from November to April.

How To Get There

NH 37 through the rain-drops. 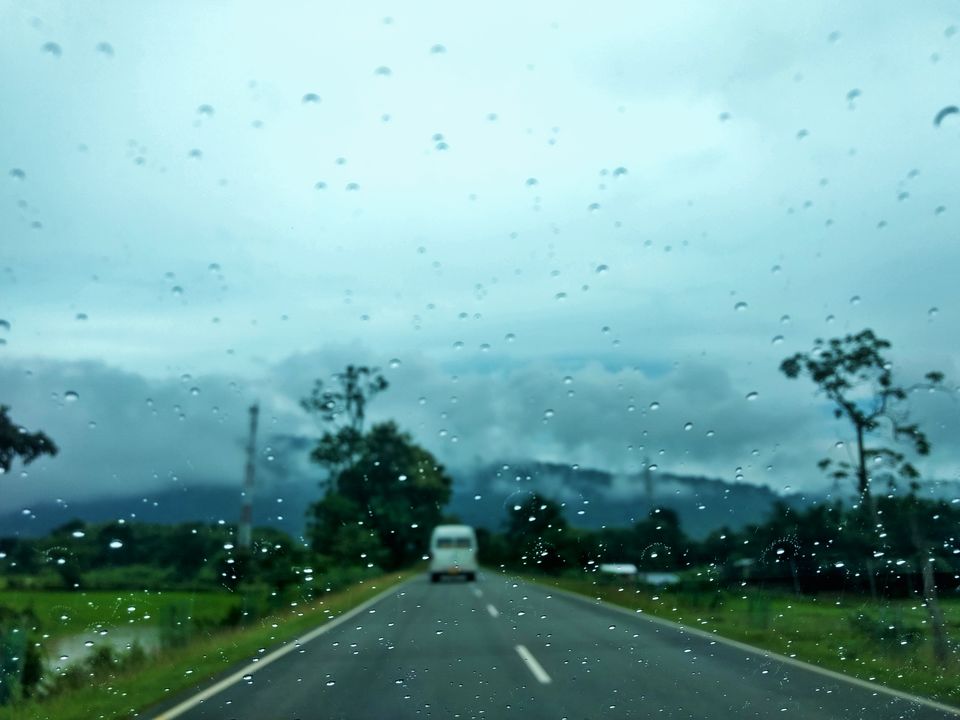 You can drive down the National Highway 37 and enter the main gate at Kohora, from the major cities nearby, namely, Guwahati, Tezpur, Jorhat.

Fly to Guwahati Airport and take the NH 37 from there. But the nearest airport is Jorhat, 90 kilometers away.

The Assam Tourism guesthouses and lodges have the charms of last century architecture and proximity. But also a host of private resorts, hotels and inns are available, with budget to luxury options.

Kaziranga has managed to charm many writers, poets and artists with her bewildering beauty and lures countless nature lovers, bird watchers and wildlife enthusiasts every year. Close to becoming a conservation success story, this beautiful forest needs a little more heart, after all it is the place which nature surely calls ‘home’!

Karizanga reveling in her signature grasslands 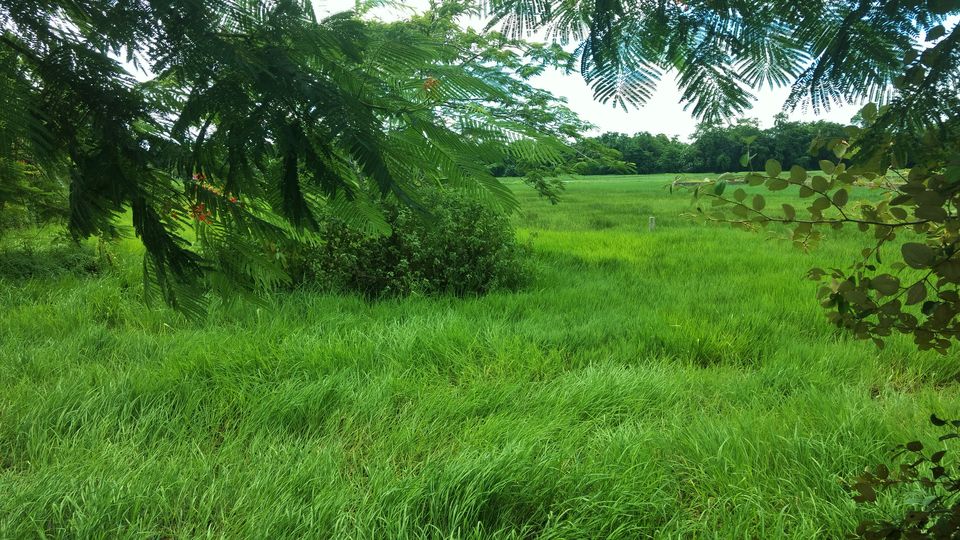 *Originally published on Medium by Avilasha.