Happy In The Happiest Country

Started from Kolkata (Sealdah Station) on KanchanKanya on 23rd October, 8.20 pm, reached Hasimara on 24th Oct, 12 noon - nearest rail station to the border town of India, Jaigaon, the town that share 'Bhutan Gate' with Phuentsholing, the border town of Bhutan.

From Hasimara railway station, took a taxi to Phuentsholing for 500/-, 45 mins drive.

Reached Phuentsholing, checked into hotel. Started for immigration office (2mins. distance from the hotel) with a filled-up form that hotels often provide, photocopy of passport and a passport size photo.

If the hotel doesn't give you the form, don't panic, you will get at the immigration office. Process takes 1 - 2 hours, because of long queue and slow execution. If you are taking a car on hire or driving your own car ( India registration number), the car and the driver too need the immigration approval. Saturdays and Sundays, office remains closed. So, plan accordingly.

Spent the night at Phuentsholing. To go further into Bhutan, we booked a cab for our entire 5 day trip at a total cost of 2800/day.

Started for Thimpu from Phuentsholing at 10. 30 am and reached Thimpu at 3.30 pm.

Here, on this route, you actually start witnessing every aspect of the 'Happiest Country of the World'. A drive through beautifully pitch-paved mountain roads, waterfalls on the way, rolling mountains and valleys, small village settlement with a cluster of 50-75 houses, meandering rivers, white fluffy clouds hanging down from a clear azure sky, thin air and a pleasant nip! Bliss.

Thimpu - The most busy and populated city, where vehicles drive in a queue, people use walkways to walk and cobbled by-lanes surprisingly lead you to a staircase which lead to parallel lanes. The traffic is so organised, that the city is the only capital city in the world with no traffic signals. A traffic police mans the entire traffic from a single traffic booth standing at the central square.

Walk down the entire town, stop and browse the local shops to buy souvenirs, sit at cafés, enjoy a relaxed lifestyle and end the day with a Bhutanese meal at a restaurant suggested by the locals.

We went to Thimpu Immigration office, for both ours and the car and the drivers pass further to Punakha and Haa. Time taken 3 hours.

Started for Punakha from Thimpu at around 12 noon. Reached at 4pm.

1st stop - Dochula Pass - A place that hosts a cluster of 108 memorial chortens/stupas. What a sight! On one side is the snow-clad parts of Himalayas and in the middle of the road rise the cluster of chortens. Head just a little further and suddenly there's a point which has colourful prayer flags tied across. Perfect point to click a few pics with the snow clad mountains making the perfect background. 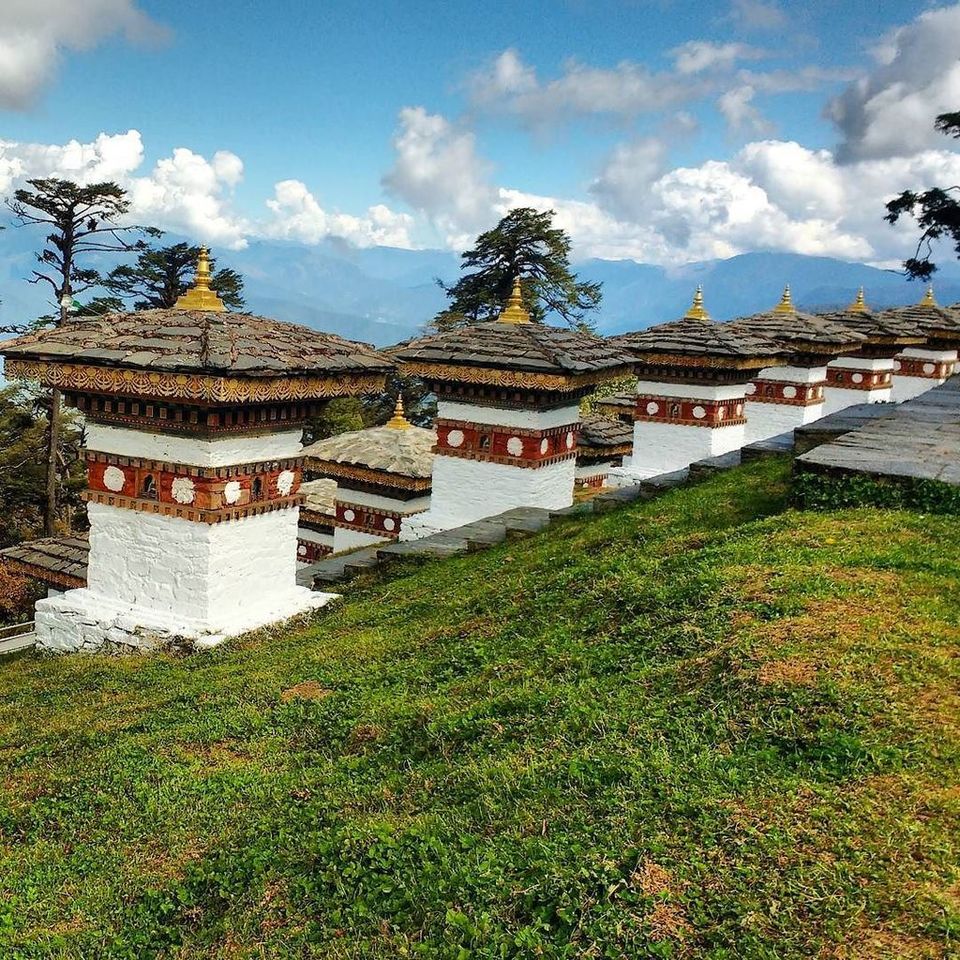 The road to Punakha is slightly uneven. 40% of the road is under construction.

Punakha welcomes you with its quiet, sleepy yet unassumingly beautiful ambience. A river flowing, a small temple, 3-laned town that shuts down between 7.30-8pm. 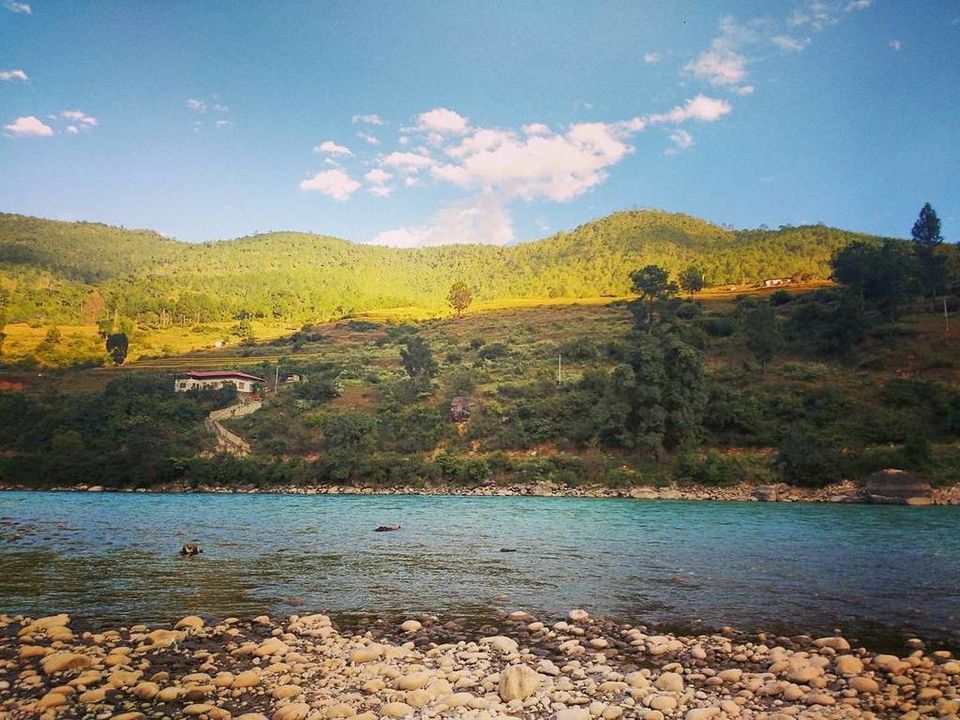 A stroll by the river, have your breakfast and head for Punakha Dzong, the second oldest and second largest dzong in Bhutan, is also the administrative center of Punakha. This dzong also enjoys a brilliant location, which is at the confluence of 2 rivers - a male river Pho Chhu and the female river, Mo Chhu.

Precisely, the confluence of the 2 rivers aspect attracted me to this place and I included Punakha in my Bhutan itinerary.

If you find this beautiful, know this is the backyard of the dzong 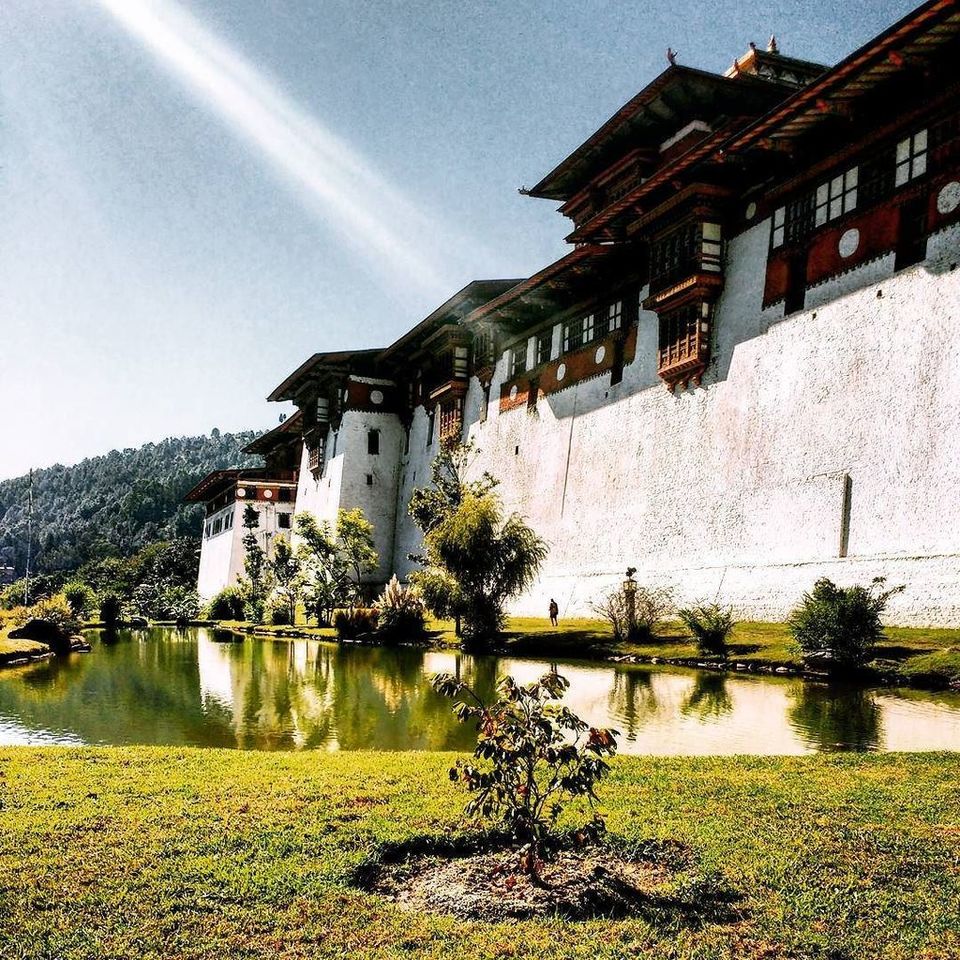 Next Stop: Chimi Lhakhang temple, also referred to as the Temple of the Divine Mad Man or the Phallus temple, is set on a height, which you have to trek up for 15 mins. from the point vehicles can reach. A temple which has young monks-in-the-making playing various musical instruments interspersed by hymns and chants. Sit under the huge Bodhi tree, soak in the silence, walk down to the car point. 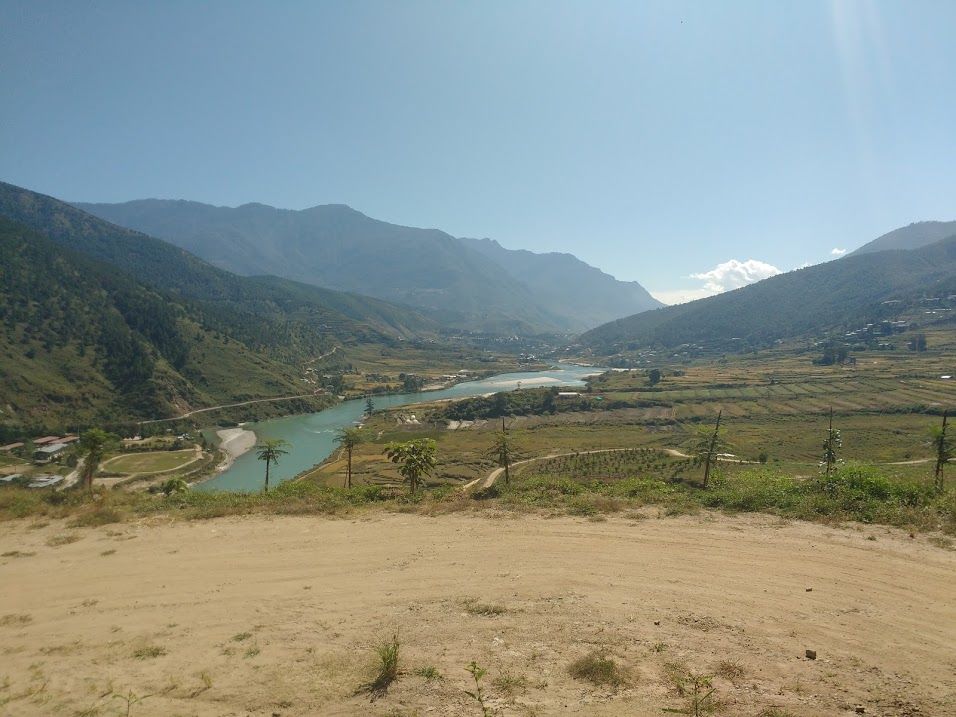 Then we headed out for Paro, which comprise the same route to Thimpu and then a diversion from the Confluence Point to Paro. 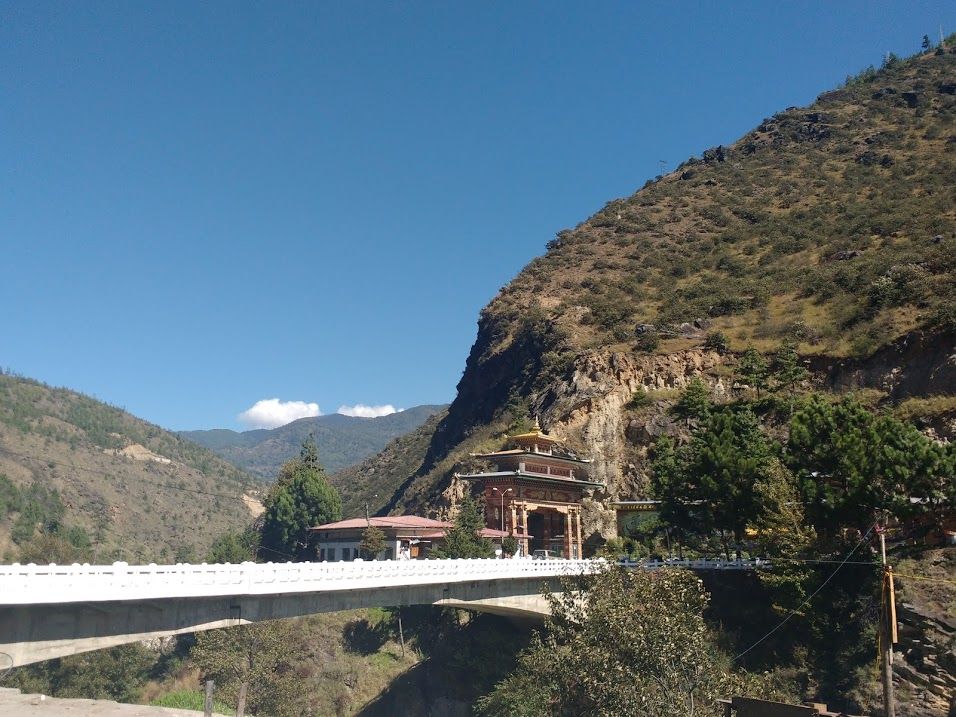 Way to Paro is scenic to say the least. The sights of the rolling valley on this route is different in comparison to what it is on the route to Punakha. Here, the valleys are greener, huge and rolling down gradually to kiss the river. Behold an amazing view of a rolling green and golden carpet as the sun plays hide and seek behind every peak.

Gradually as you near the city, the hills give way to plain lands with a river flowing by on one side of the road and rice plantation on the other side. Eventually, as you drive ahead towards the Paro town, the air strip replaces the murmuring river. 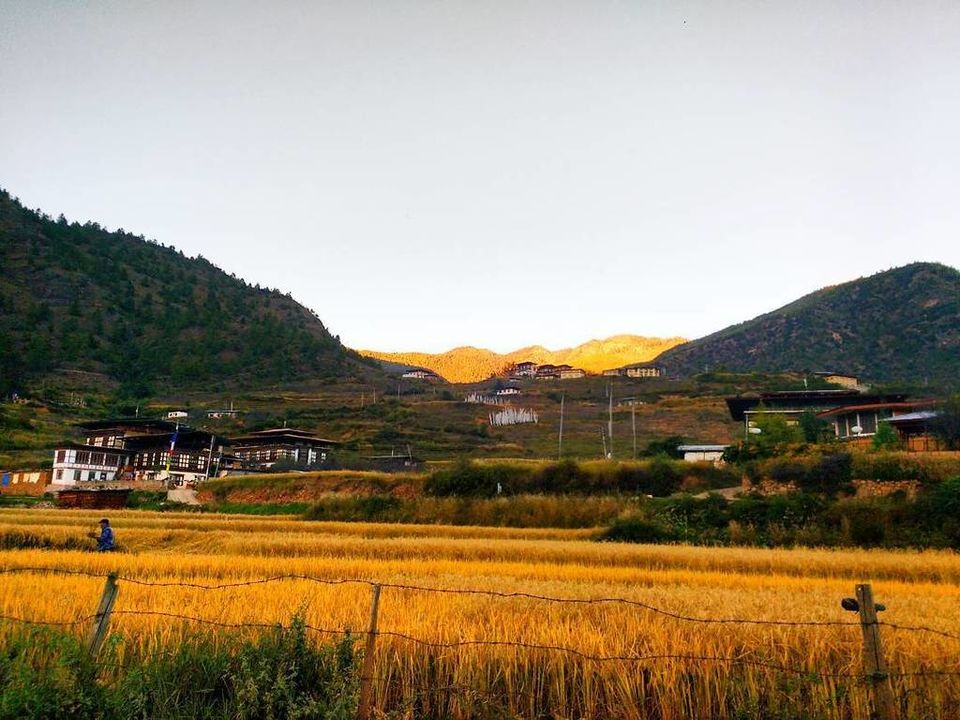 Finally, you enter Paro, where the river welcomes you. The city if personified would be called a very disciplined, organised city. Rows of buildings of almost the same height, lit in the same way on both sides of the road, which opens up to a ground and similarly planned and structured by-lanes.

Go for a stroll around the city, and then plan a day to climb up the Tatkshang Monastery on the Tiger Hills.

We started for Haa Valley via Chele La pass. The drive is through a narrow road up-hill, which after an hour opens up to the highest motorable pass in Bhutan, Chele La adorned with colourful, red and white flags. 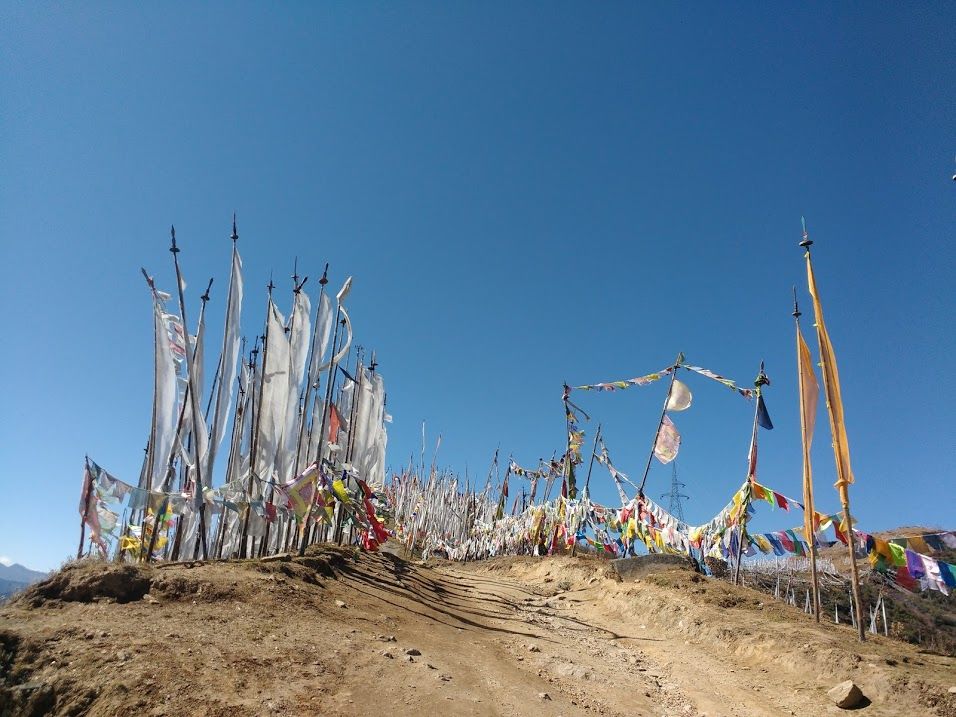 From Chele La Pass, you drive down-hill to Haa Valley, an hour drive.

Haa - a quaint, quiet, just a few house settlement in the valley. So tiny a place, that you can just walk around and grasp the beauty and peacefulness in just one go. 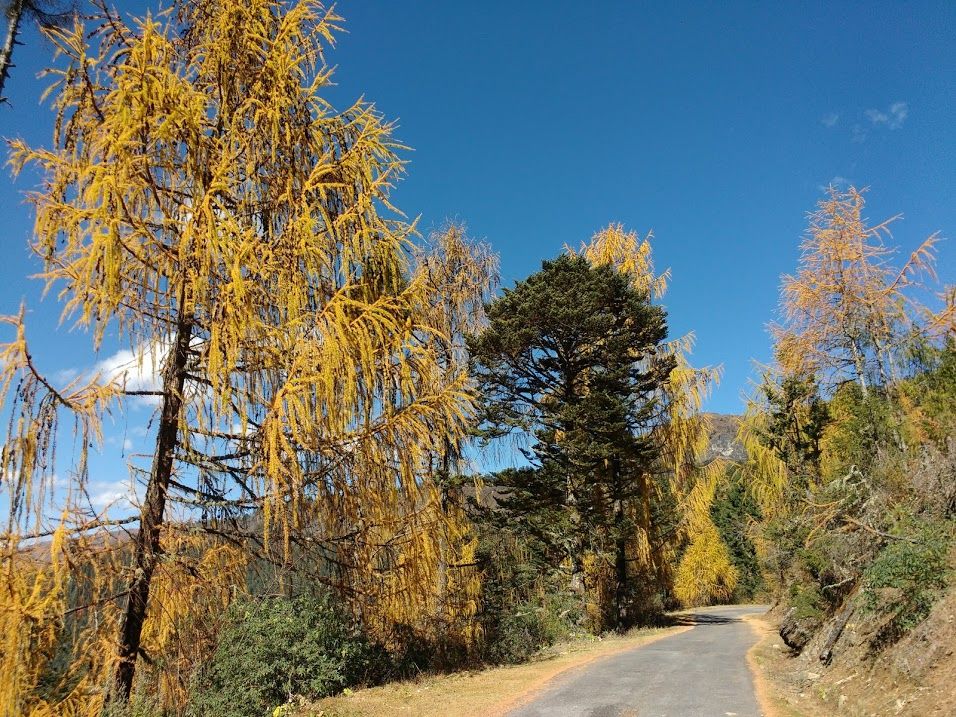 Travelled back to Phuentsholing from Haa to board the train back to Calcutta.

1) Bhutan can be reached by car, train or Air, from India

2) People travelling by train or car, will have to get Immigration stamp from the office at Phuentsholing, if entering from Hasimara - Jaigaon in West Bengal

4) To get Immigration to Bhutan, Indians need to present any Indian Government assigned documents - Passport, Voter's I.d and a passport size photo alongwith

7) Ema - Datshi (Chilly Cheese) is the National Dish. Bhutanese use too much as in TOO MUCH chillies in food. So, direct them as per your preference

8) Commute and transportation is almost nil between towns after sunset