One of the oldest temples in South India, this scenic temple stands on the shore of the Bay of Bengal, enclosed by a row of bulls carved out of rock. It is listed as a protected monument under the Archaeological Survey of India and has shrines dedicated to Hindu Gods, Vishnu and Shiva. 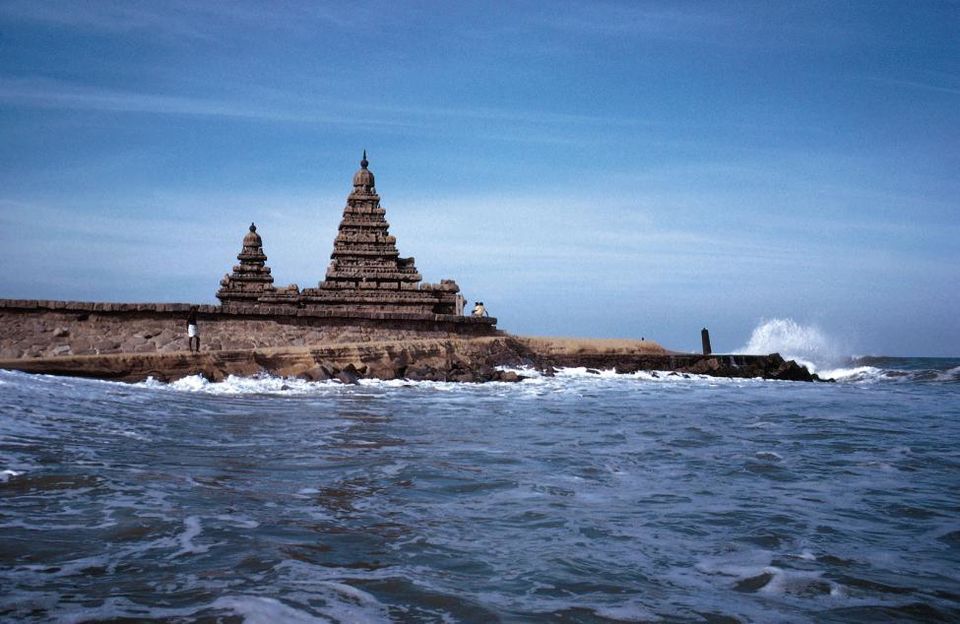 The pride of Mahabalipuram, it is the world’s largest bas-relief measuring 27m*9m. This huge whaleback shaped rock has carvings which are said to represent creation itself. 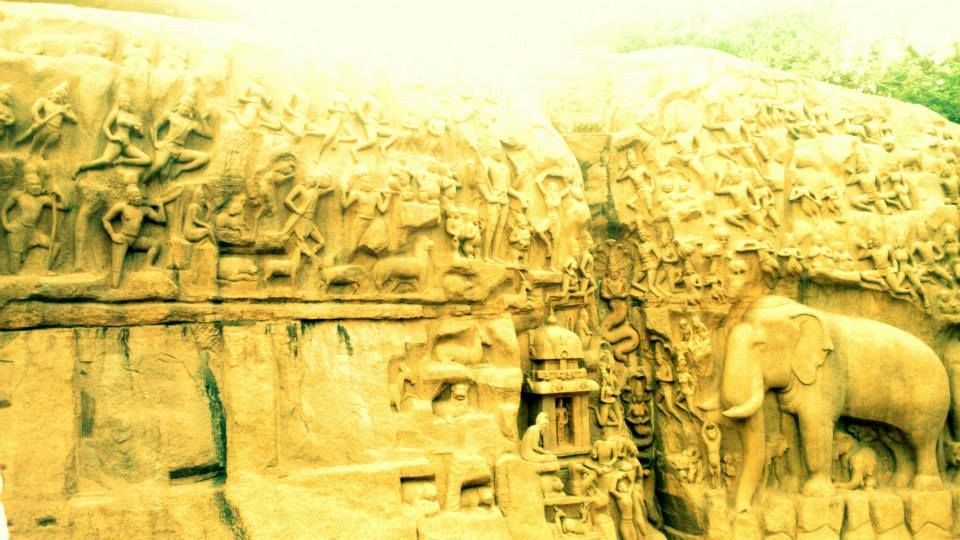 These are 5 monolithic temples, each created in different styles. It is also known as Pancha Pandava Rathas

The caves contain splendid sculptures depicting the Goddess fighting the demon, Mahisashur on one side and Lord Vishnu’s cosmic sleep on the other.

This sculpture depicts Krishna as the protector of all living things and epitomes rural bliss. 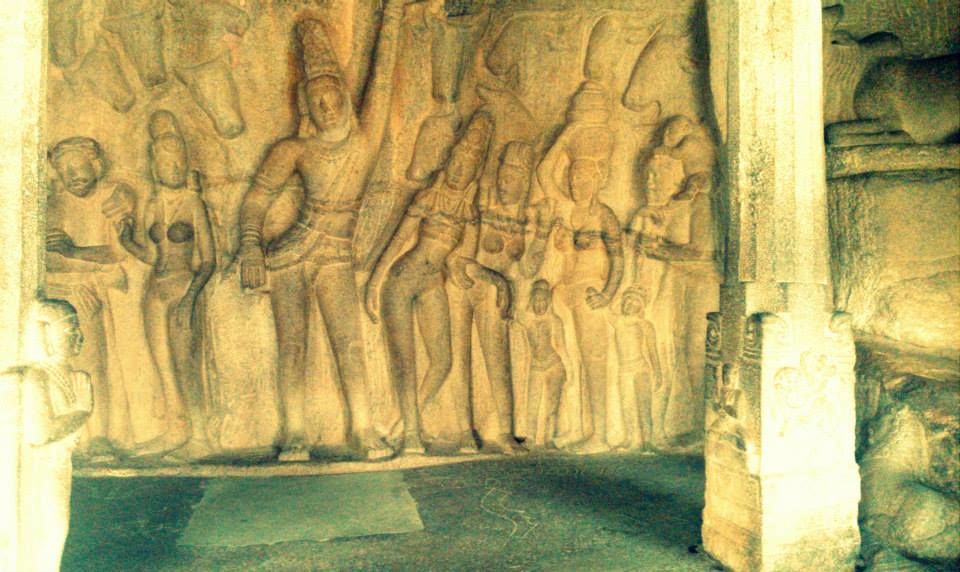 This has to be the most mind blowing rock you will ever see! This is a single boulder rock resting on a small rocky base. Even the tsunami and 7 elephants could ‘not move it an inch! 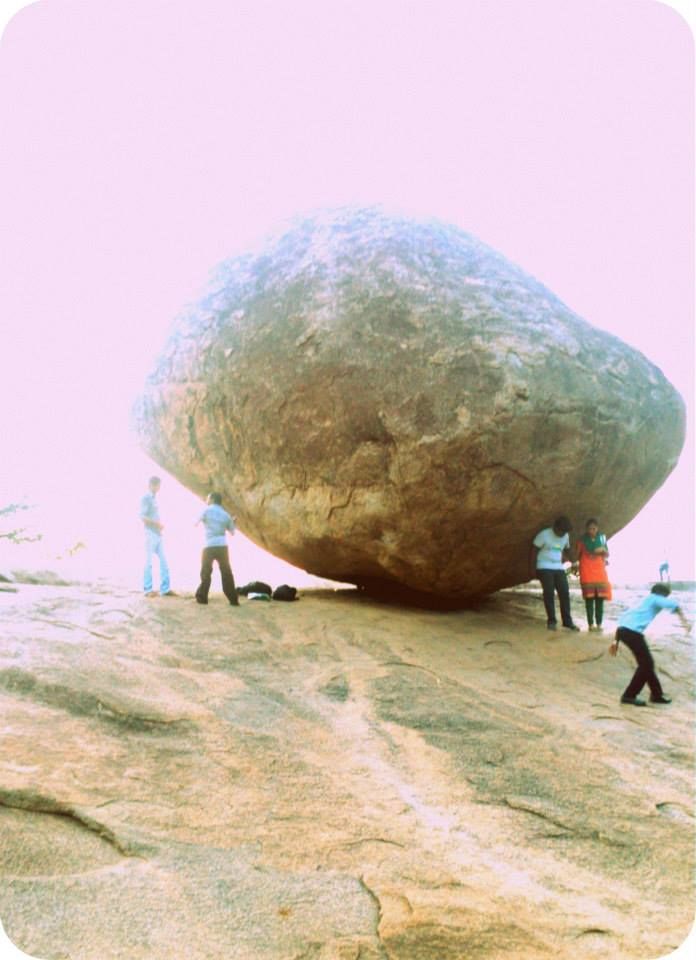 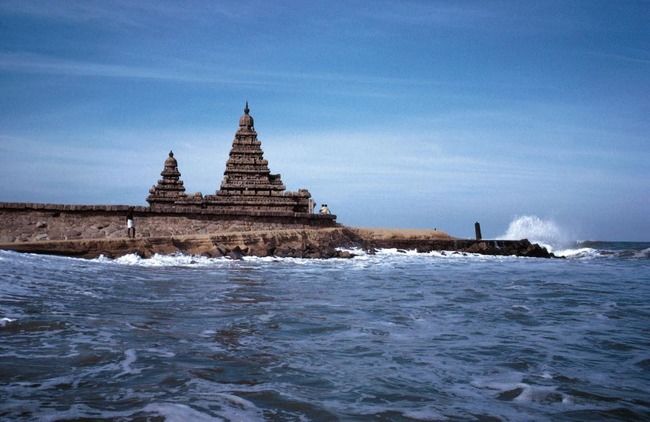 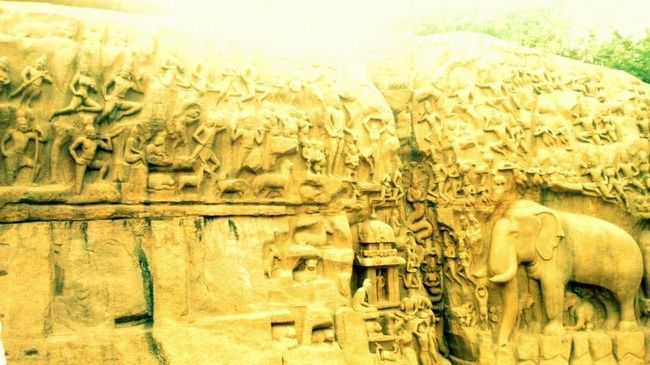 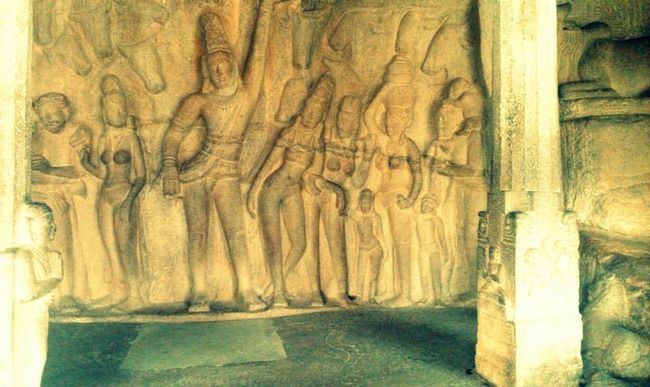 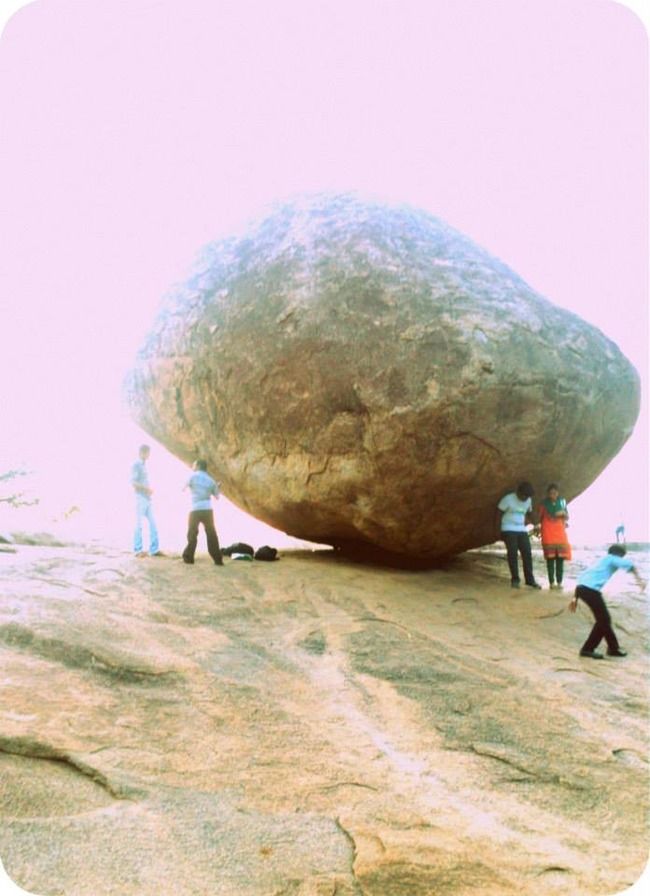 At a distance of 55kms from Chennai, on the sea shores of the Bay of Bengal lies Mamallapuram, also known as Mahabalipuram. It is a centre of art, replete with rich Dravidian style temple architecture and has portraits carved in stone, depicting stories from the epics and the people of yore. The sound of wind on stone and the waves crashing against the majestic rocks of the world famous Shore Temple once inspired the Beatles to compose soul stirring compositions which till date enthral music lovers. No wonder this quaint little beach town with its sunny beach, silvery sand, creative splendours and the hippie backdrop, is a big draw for tourists all over the world and I was no different.

Mahabalipuram is just 55 kms from Chennai. You can self-drive, take a bus, taxi, train or plane to Chennai and then proceed by road on a transportation of your choice. State buses are cheap and cost just Rs. 50 per ticket. Alternately, the nearest railway station is Chengalpattu, 30kms from Mahabalipuram and trains are easily available.

Getting back to my story, once I checked in my guest house and freshened up, I headed out to explore the city. The market place was vibrant with tiny stores selling ayurvedic herbal oils, handmade accessories, perfumes as well as the typical hippie gear of tye and dye kurtas and harem pants! The restaurants were an eclectic mix serving an array of food from continental fare to traditional chettinad cuisines. I had lunch at a delightful place called the “Big Elephant” and the portions were a little too much for my palate! Thereafter, I walked off to visit the sculptural remnants which depict the glory of the erstwhile Pallava Kings and the creativity of the craftsmen. I hired a tour guide to regale me with the stories carved in the stones and to my delight; he doubled up as my photographer as well!

The Pallava Dynasty ruled over Tamil Nadu in the 3RD century CE and the sculptures are hugely influenced by epic stories from the Mahabharata and the life of Krishna. The stones have rich portraits of various gods, goddesses, celestial beauties and characters from the great epics.

There are six places in this town which every traveller must visit - Shore Temple, Arjuna's Penance, Five Rathas, Mahishasuramardhani Caves, Krishna Mandappan and Krishna's Butterball.

Later on, as the evening approached, I went to the beach , perched quietly on a lonely boat admiring the majestic golden orange sky as the sun set across the horizon and listened to the sound of the waves crashing on the rocks. As I sat lost in wonder, I was approached by a pervert who tried to make conversation and disrupted my moment of peace! I fended him off by pretending to be a rock and did not even acknowledge his presence. I did ‘not move an inch and kept staring blankly at the sea. After 10 minutes or so, he gave up and went away (Score!). At the same beach, I also met a lovely Russian lady, Olga, who is an Indophile and a staunch follower of Sai Baba. A “less than satisfying” dinner followed at a pseudo French Restaurant. The night came to an end with a lonely rain dance at the terrace of my guest house.

It had been quite a day. Though I missed the company of friends, I felt closer to myself. I felt as though I wasn’t just an individual entity; I was a part of the great human race, ancient, wise and still evolving. Gradually, fatigue got the better of me and I dozed off to lala land dreaming of upcoming adventures in enchanting Tamil Nadu!