The Forgotten Empire..Hampi - beauty in ruins

The love for History took us to Hampi. We had been planning for this trip since 2013, but having heard about its extreme weather conditions, we were discouraged to plan for this amazing trip. Finally this trip happened during December 2015.

We took the most convenient travel to Hampi from Bangalore - Hampi Express from Majestic. This training is at a very convenient time - 10.30 PM & reaches you to Hospet by 6 AM. We had reached a little before time. Hospet is the nearest railhead to Hampi & you can reach Hampi by numerous local conveyance options available - bus, car, auto. We took an auto from the station that took us to the resort in 15 minutes & the cost was quite reasonable - Rs.100 for 3 of us in the reserved auto. Due to year-end holiday season, most of the hotels & home stays were booked & we did our bookings late. But, we ended up in a beautiful resort at one of the most convenient locations. Vijayashree Heritage Resort is situated on the main road that connects Hospet to Hampi & our resort was mid-way between Hospet & Hampi. This resort is run by a Jain Family & served vegetarian food. But, with an itenary of 2 days & 1 night we had very less time to spend at the Resort.

After a quick breakfast & freshening up at the resort, we started our day at 10 AM. We heard from the resort that to see Hampi, the best conveyance is a local auto as the auto-drivers are very good as local guides. We called up our auto-driver friend from  the morning & he agreed on a day package of 1000 bucks for touring us around Hampi.

Our trip started with the famous Virupaksha Temple.

The focal point of Hampi Bazaar is the Virupaksha Temple, one of the city’s oldest structures, and Hampi’s only remaining working temple. The main gopuram (gateway tower), almost 50m high, was built in 1442, with a smaller one added in 1510. The main shrine is dedicated to Virupaksha, an incarnation of Shiva.

To the south, overlooking Virupaksha Temple, Hemakuta Hill has a few early ruins, including monolithic sculptures of Narasimha (Vishnu in his man-lion incarnation) and Ganesha. At the east end of the recently abandonded Hampi Bazaar is a monolithic Nandi statue , around which stand colonnaded blocks of the ancient marketplace. Overlooking the site is Matanga Hill, whose summit affords dramatic views of the terrain at sunrise.

Lakshmi, the temple elephant, is an endearing sight. She would bless the devotees with her trunk & that would leave the little travelers in glee.

Surrounding the Temple is the beautiful Temple Complex with its rocky terrain & many monolithic rocks & small structural formations that are ruins of a flourishing town of the Vijayanagara Dynasty. This is the UNESCO World Heritage site & you can hire a guide for Rs.100 for a tour of the site with the enchanting stories of the rulers, their penchant for architectural brilliance, art, culture & music. you can also buy a small book & read the history.

We followed up the temple visit with a sumptuous lunch at the Mango Tree Restaurant behind the temple complex. This area is the hippie trail & with quaint homestays, ayurvedicc SPAs, salons, continental eateries looking like Goa-Shacks. Mango Tree is a popular eatery & all you get is vegetarian. We ordered Veg Sizzlers, Corn-Spinach Pizza, Falafel with Pita & Nutella Pudding. All of these were served on Banana Leaves & were very tasty, barring the Nutella Pudding that was rice kheer with a dollop of Nutella :).

Our Sumptuous lunch was followed by the Vittala Temple Complex.

The undisputed highlight of the Hampi ruins, the 16th-century Vittala Temple stands amidst the boulders around 2km from Hampi Bazaar. Work possibly started on the temple during the reign of Krishnadevaraya (r 1509–29). It was never finished or consecrated, yet the temple’s incredible sculptural work remains the pinnacle of Vijayanagar art.

The ornate stone chariot that stands in the courtyard is the temple’s showpiece and represents Vishnu’s vehicle with an image of Garuda within. Its wheels were once capable of turning.Our guide pointed out that this one of the 3 such stone chariots present at Konark, Mahabalipuram & thw present one in Hampi.

The outer ‘musical’ pillars reverberate when tapped. They were supposedly designed to replicate 81 different Indian instruments, but authorities have placed them out of tourists’ bounds for fear of further damage.

As well as the main temple, whose sanctum was illuminated using a design of reflective waters, you’ll find the marriage hall and prayer hall, the structures to the left and right upon entry, respectively.

We concluded the trip with the visit  to the Tugabhadra Hydroelectric Power station. This was a time consuming affair & we wasted a lot of time waiting for the bus to take us to the top of the plant. The evening view of the river below & the illuminated power station was a beautiful site though. This was our last trip for the day & we returned to our resort fatigued due to the scorching heat of the day.

Our next stop was the Royal Center.

While it can be accessed by a 2km foot trail from the Achyutaraya Temple, the Royal Centre is best reached via the Hampi–Kamalapuram road. A number of Hampi’s major sites stand here.

The Mahanavami-diiba is a 12m-high three-tired platform with intricate carvings and panoramic vistas of the walled complex of ruined temples, stepped tanks and the King’s audience hall. The platform was used as Royal viewing area for the Dasara festivities, religious ceremonies and processions.

There's also the Hazarama Temple, with exquisite carvings that depict scenes from the Ramayana, and polished black granite pillars.

Further south, we visited various temples and elaborate waterworks, including the Queen’s Bath, deceptively plain on the outside but amazing within, with its Indo-Islamic architecture.

Other interesting stop offs along the road to the Virupaksha Temple is the 6.7m monolithic statue of the bulging-eyed Lakshimi Narasmiha in a cross-legged yoga position and topped by a hood of seven snakes. Nearby is the Krishna Temple built in 1513, which is fronted by a D-cupped apsara and 10 incarnations of Vishnu.

We called off our trip around 3.30 PM on Day - 2 & headed to our resort as our return was planned by the night bus from Hospet. Due to lack of time, we missed a destination around Hampi - Kishkindha, the fabled abode of Shri Hanuman.

We concluded our tryst with History in 2 days, but Hampi left us craving for more. 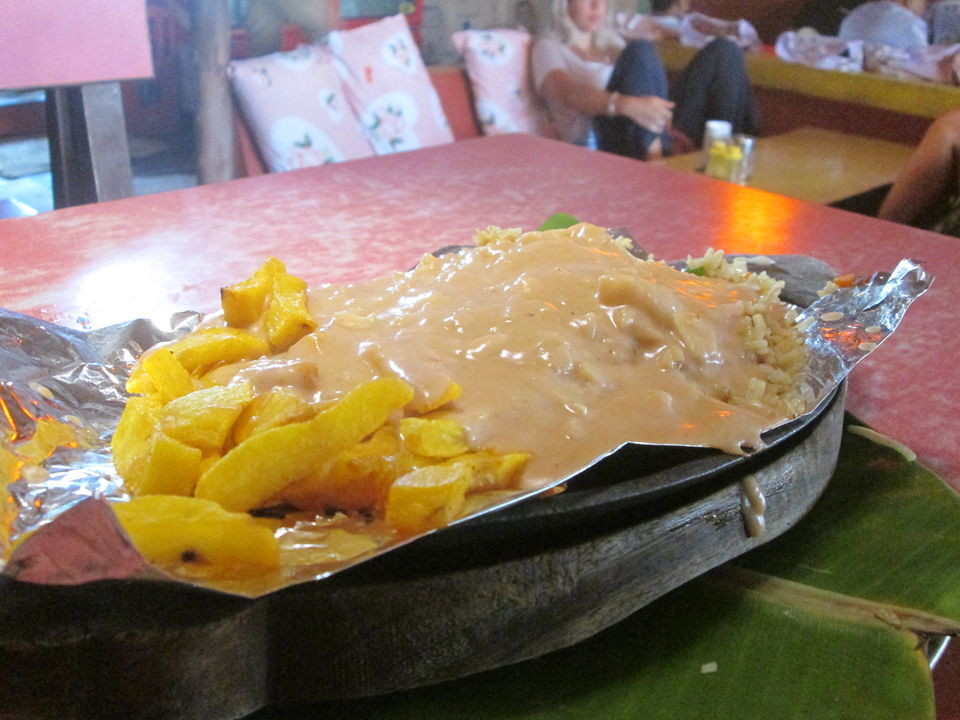 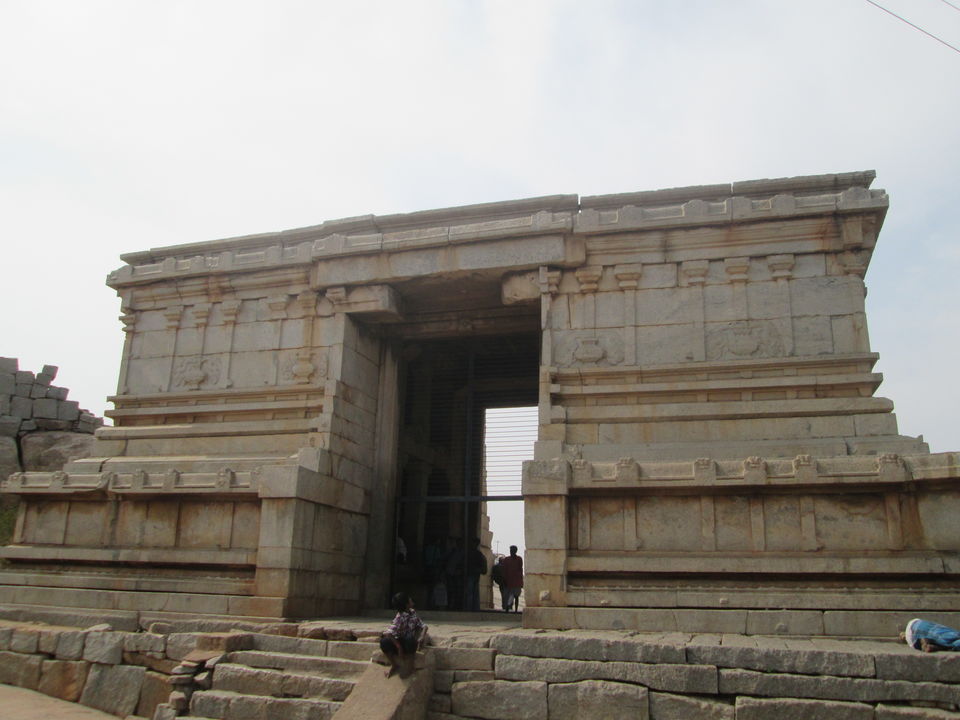 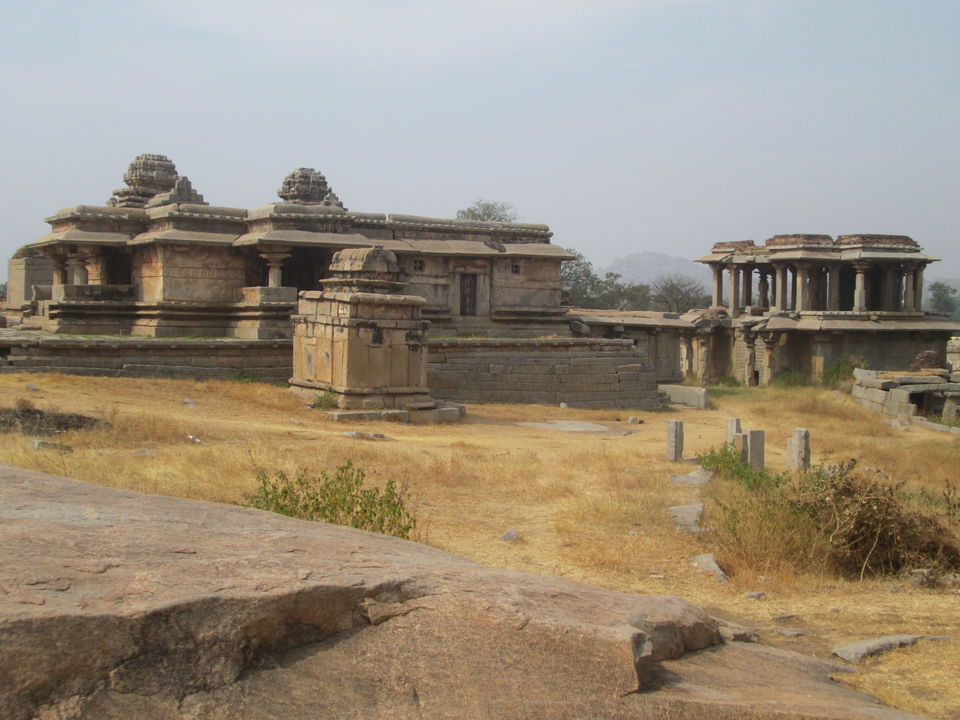 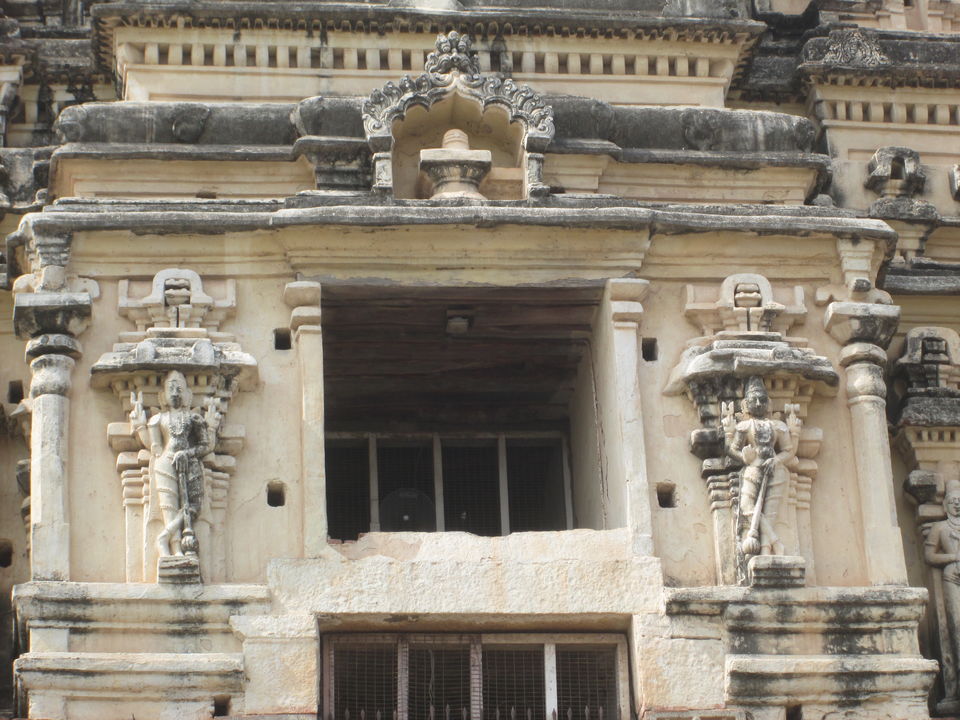 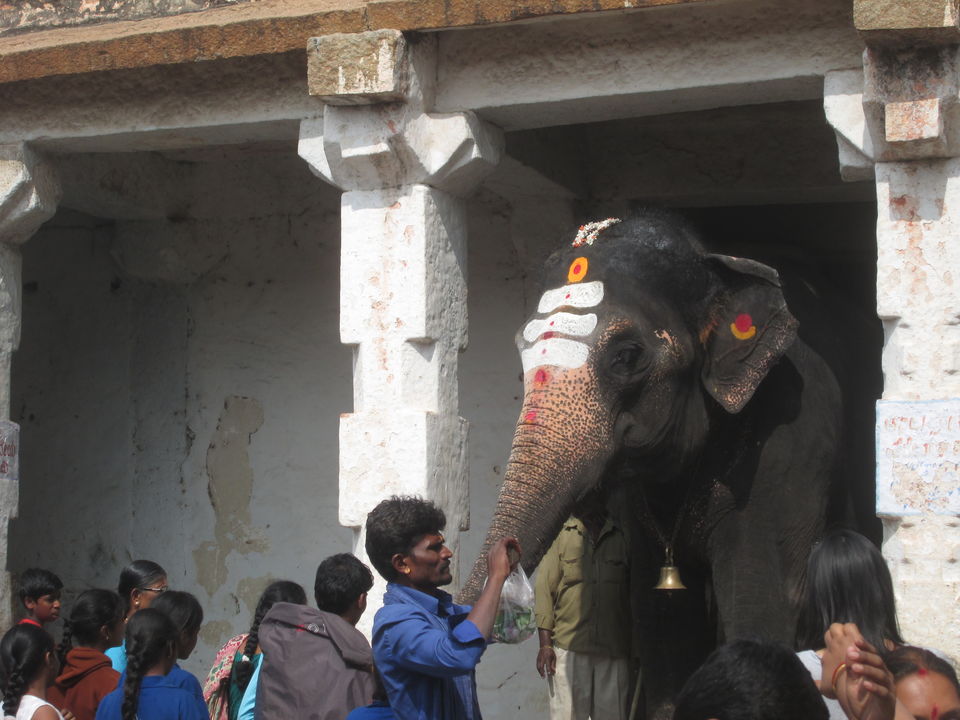 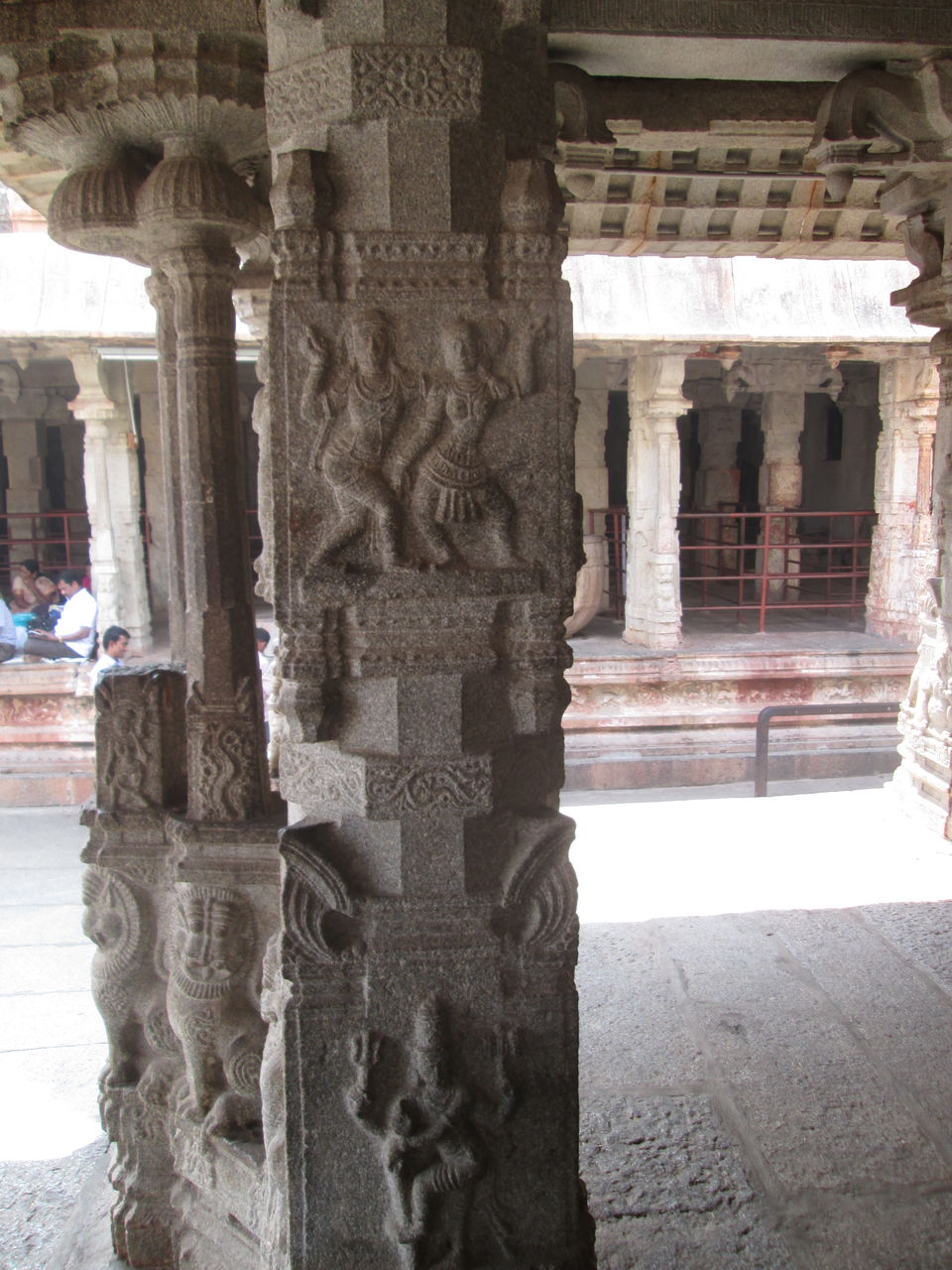 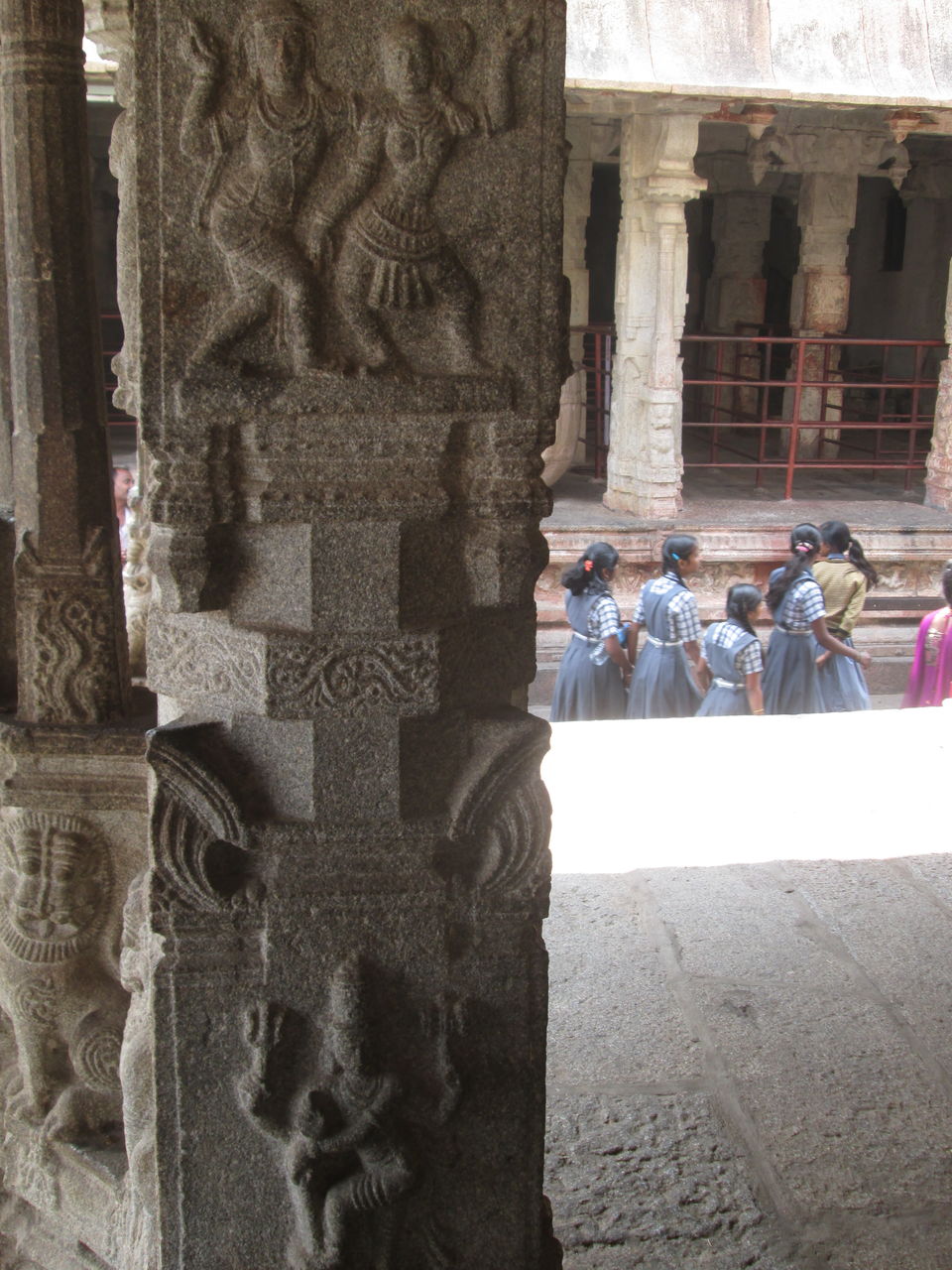 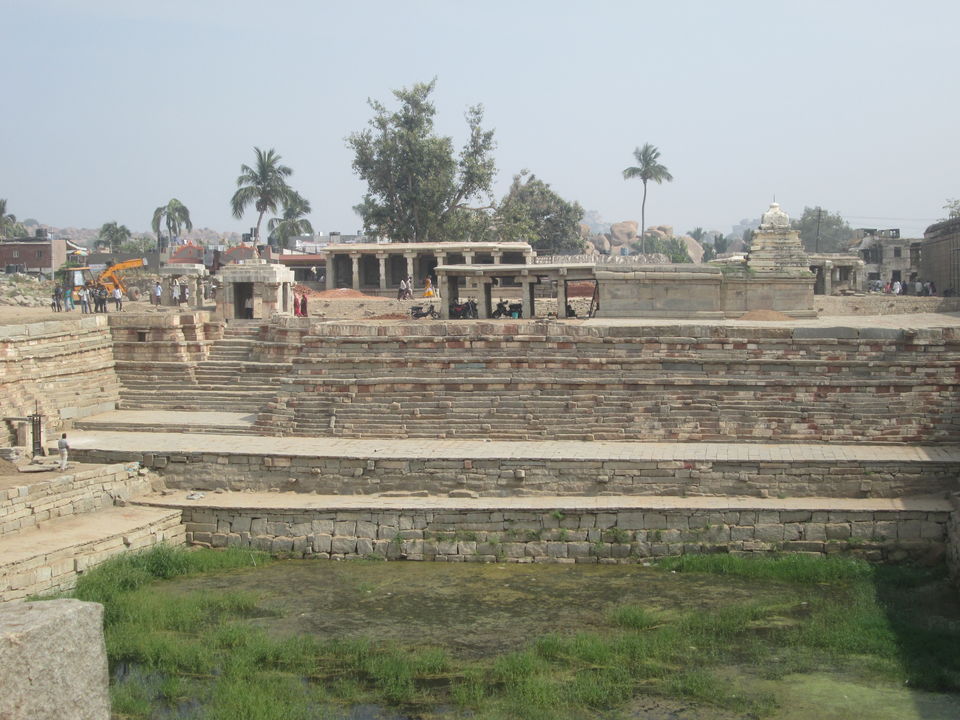 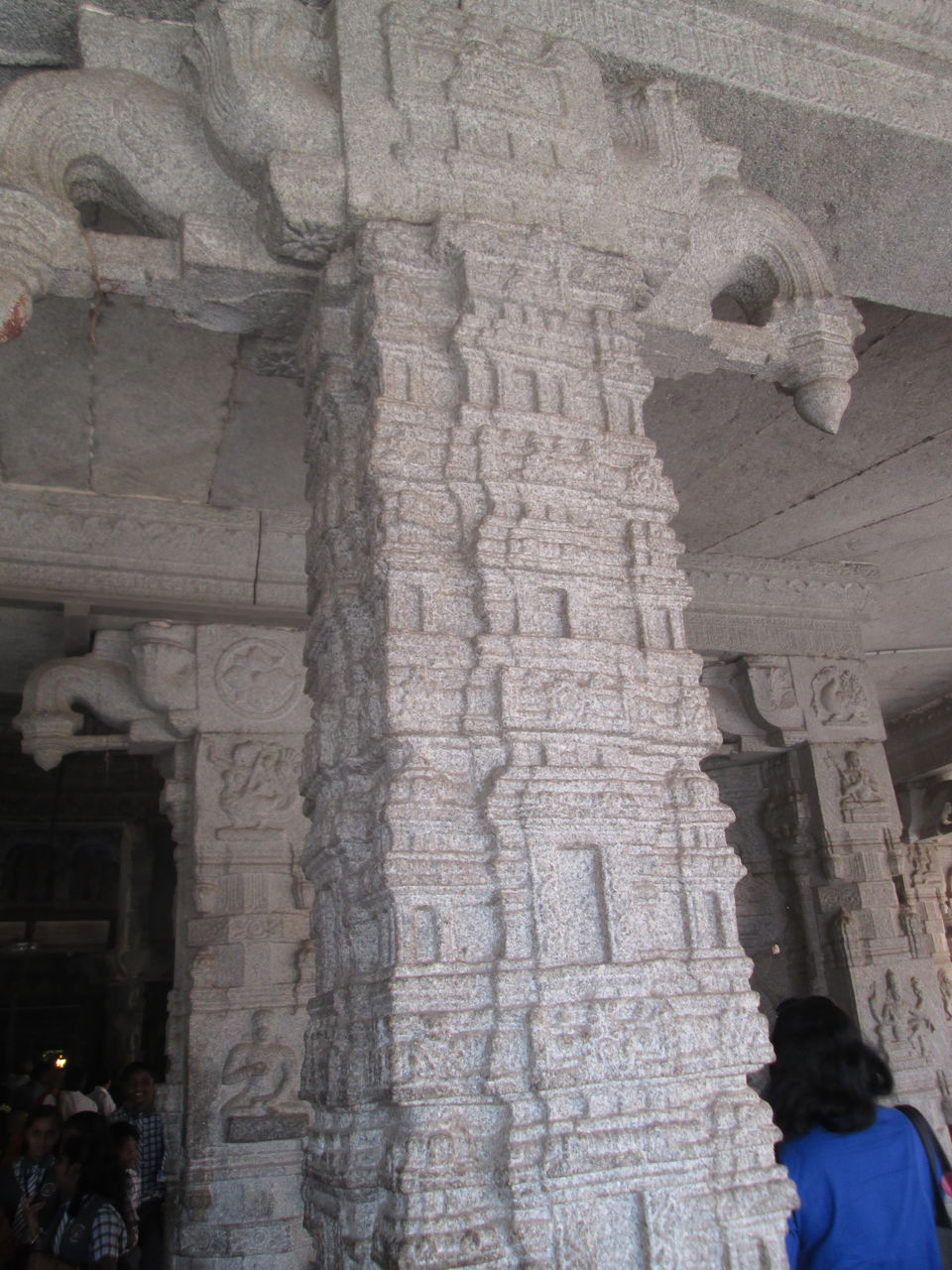 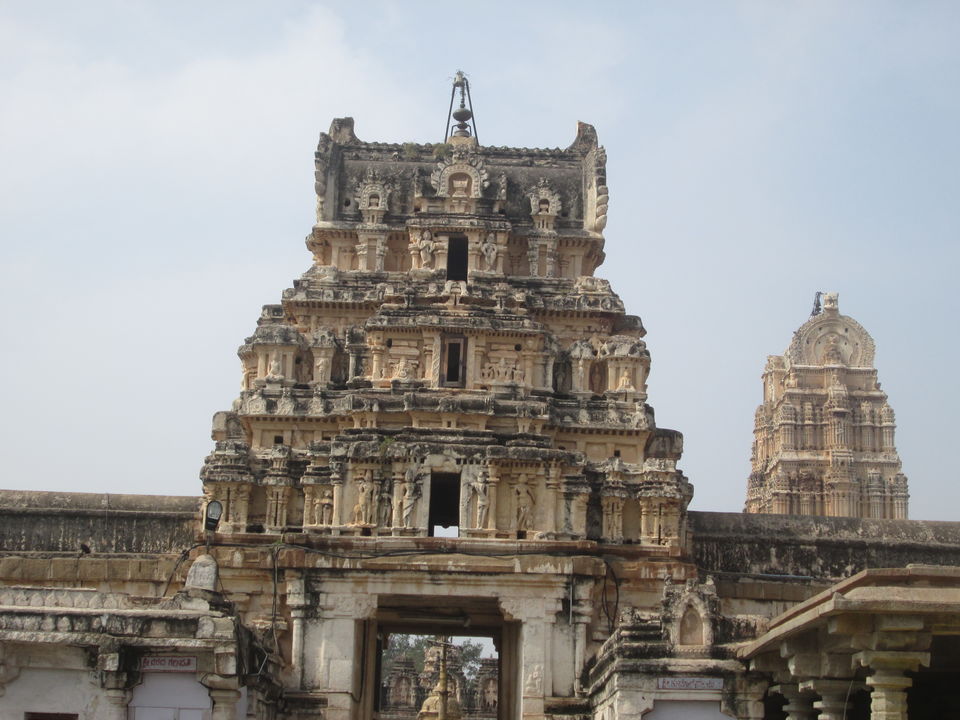