India Travel GuideIndia Trips5 Cities In 7 Days – How I Explored The Best Of 3 States In A Week! 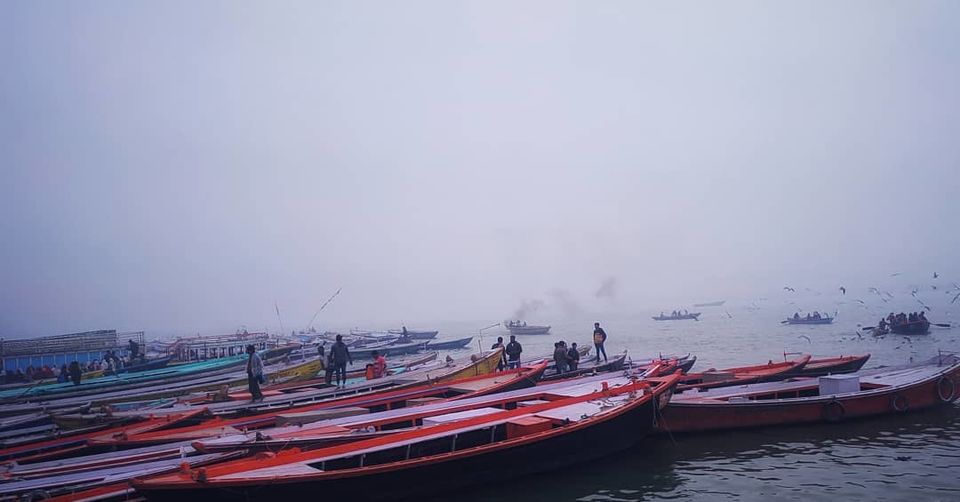 As an avid traveler, I always wanted to visit Varanasi and get lost in its divinity. So, during my winter break back in December 2019, I decided to make my wish turn into reality. You all must be pondering if that's the case, then how does the title "5 cities in 7 days" even apt, right? Okay, so let me guide you through the exact mechanism of how I planned it out.

My college lies in a small city named Sambalpur. The direct train route from Sambalpur to Varanasi has intermediate cities namely Ranchi, Sasaram, Deen Dayal Upadhyaya(Mughal Sarai) which I felt was boring because there's no major city where we can stop for a day and explore. So, I started exploring other routes and I found out an alternate route. The route consisted of cities namely Raipur, Lucknow, Kanpur and then Varanasi. Being from a small town, when I used to see news on Christmas eve, I used to embrace the celebrations in big cities. And hence, I decided to end my trip on a high note and what's better than concealing it in the city of Joy, Kolkata.

I began this trip with my college roommate. We reached Raipur very early at 5 am. We had our train to Lucknow in the afternoon. Approximately, we had around 7 hours to explore whatever we can. I had heard about Marine Drive of Raipur where we could have understood the culture of Raipur as it acted as a hub for most of the people residing there. It was around 2 kilometers from the bus station and we decided to walk it through. We reached there at around 6 am and the place was surreal. We stayed there for a while after which we ate local breakfast and made our way to Raipur Junction. To be honest, I found this station to be pretty good with services like Dominos and Cafe Coffee Day at Station premises itself. We did our lunch at Dominos and then boarded our train to Lucknow.

The reflections of the buildings near Marine Drive 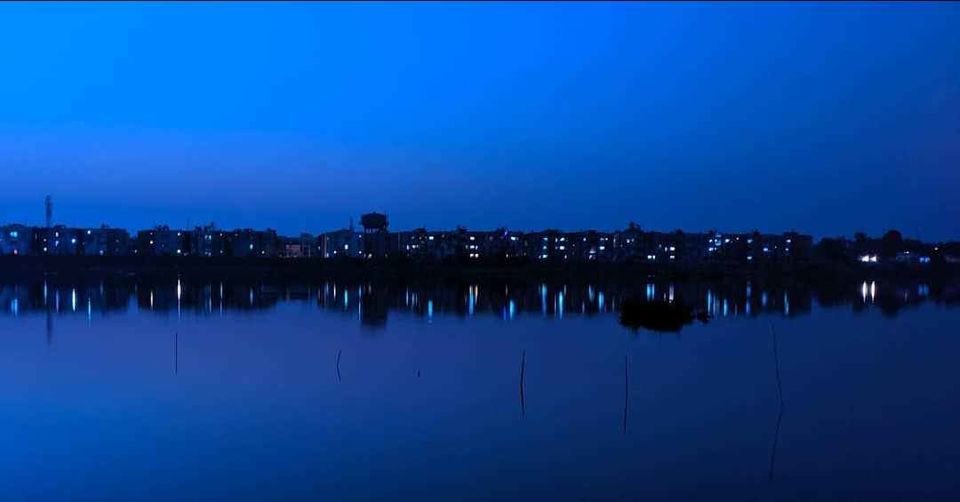 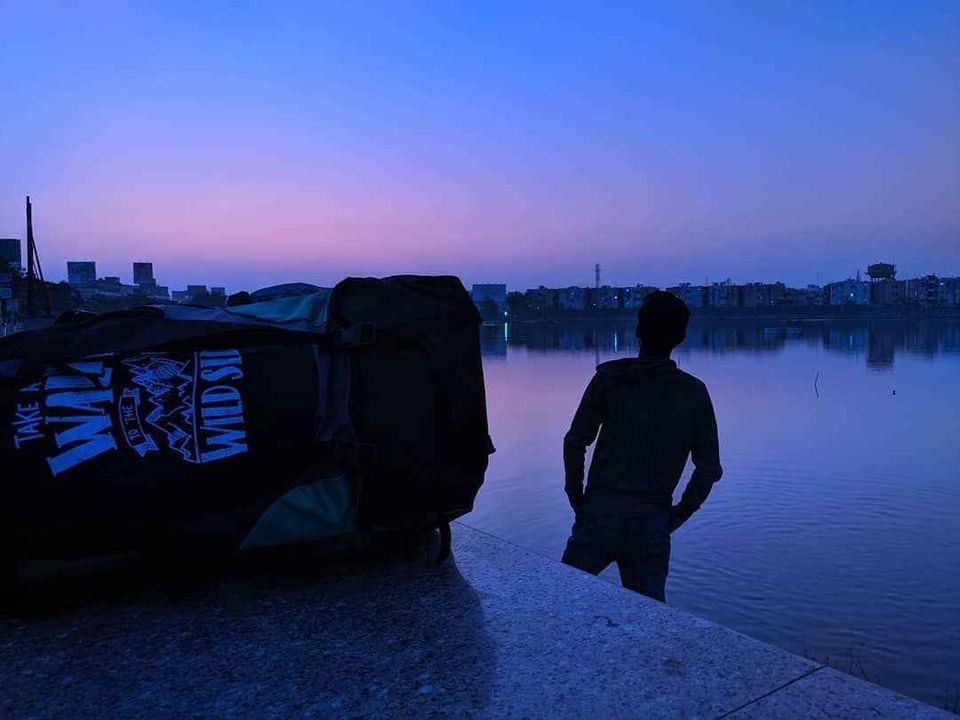 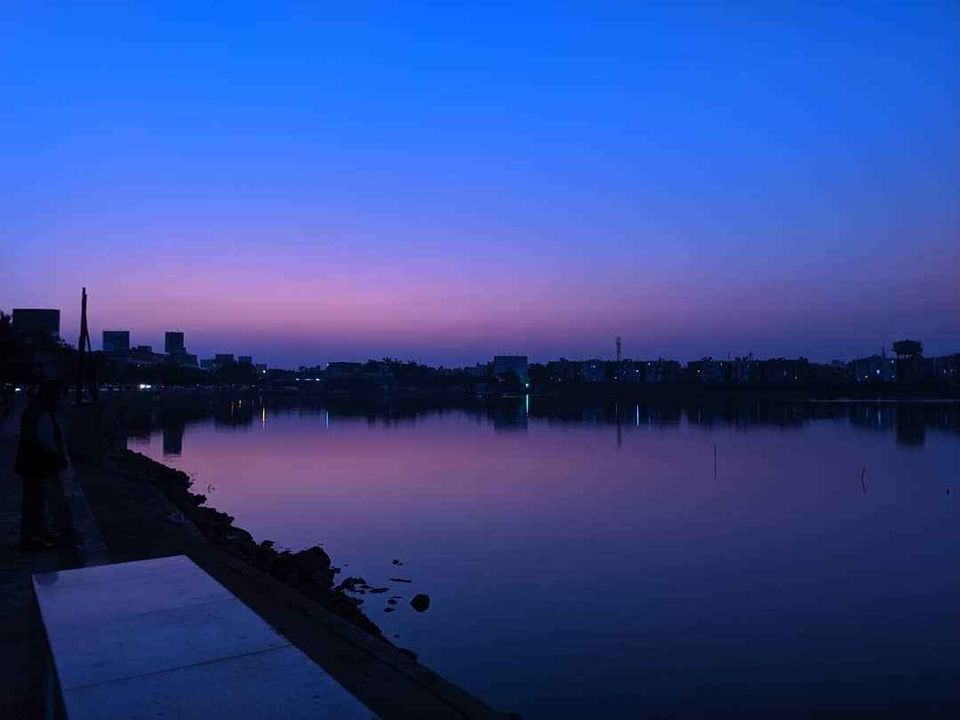 Getting closer to Raipur 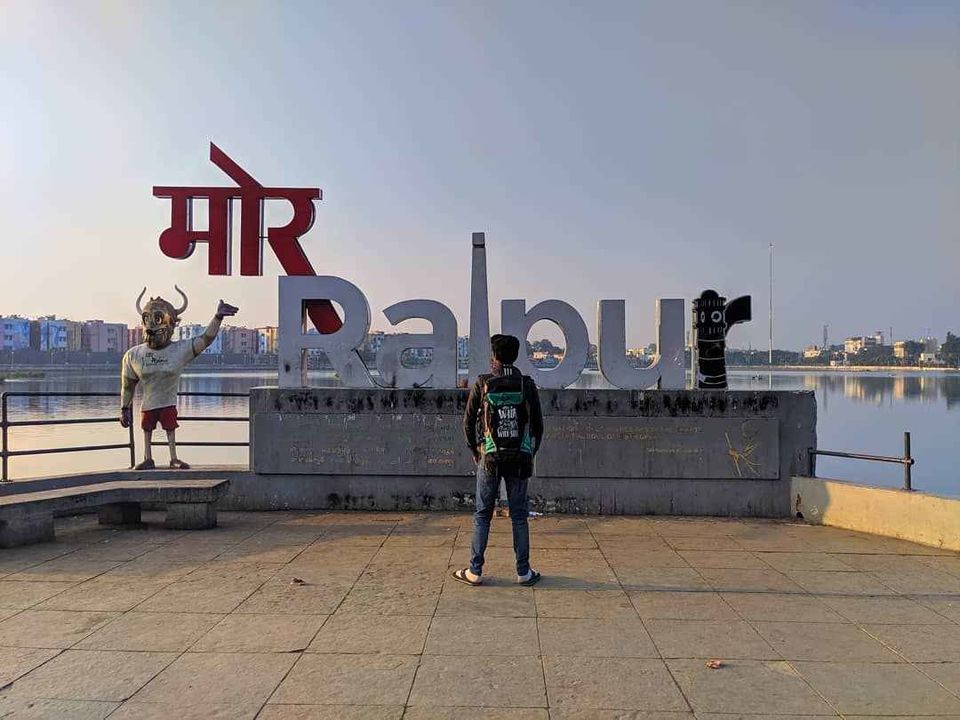 Amidst the tension between CAB and NRC, I reached Lucknow on 21st December 2019. The city had encountered huge chaos just the day before I arrived and the circumstance was very heated up. An innocent was killed and 50 people were taken into lock-ups. Scared and terrified, I was wondering whether I should go out and roam around or not. But then, I thought let's go out and add this experience as well into my book of life.

After travelling around for some time, I had already learnt that: Precaution is very important when you visit a new place and you are unaware of the whereabouts of the city. After inquiring a bit, I decided to skip the places where the chaos broke out last afternoon. But the worst part was : I had to sacrifice the most renowned places like Bada Imambara and Rumi Darwaza which was on my list even before the inception of the trip. I went on to explore the southern part of Lucknow where the situation was under control. I went out for some local sightseeing, travelled in the metro, studied the Nawabi culture, talked to a few people, visited some amazing places, had one of the best haircuts, ate a few delicacies of Lucknow and smiled because there's a saying: "Muskuraiye, aap Lucknow main hai" 🙂

Although I could not explore some of the best places, it was still worth it. Someone said : "Live with no excuses and travel with no regrets". Bhaisahab, Lucknow ki thand aur Makhan Malai ka anand, phir Nawabo ke sheher leke jayegi mujhe kaafi jald!

Walking through the platorm of Lucknow railway station 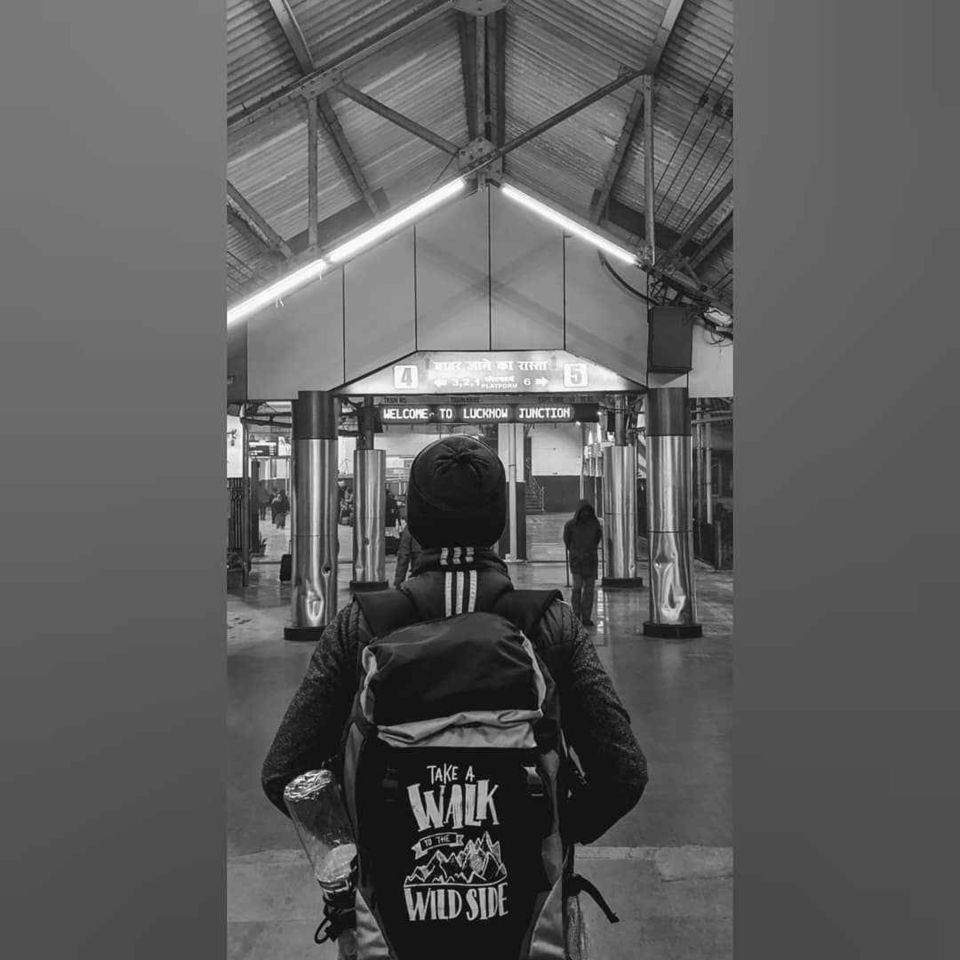 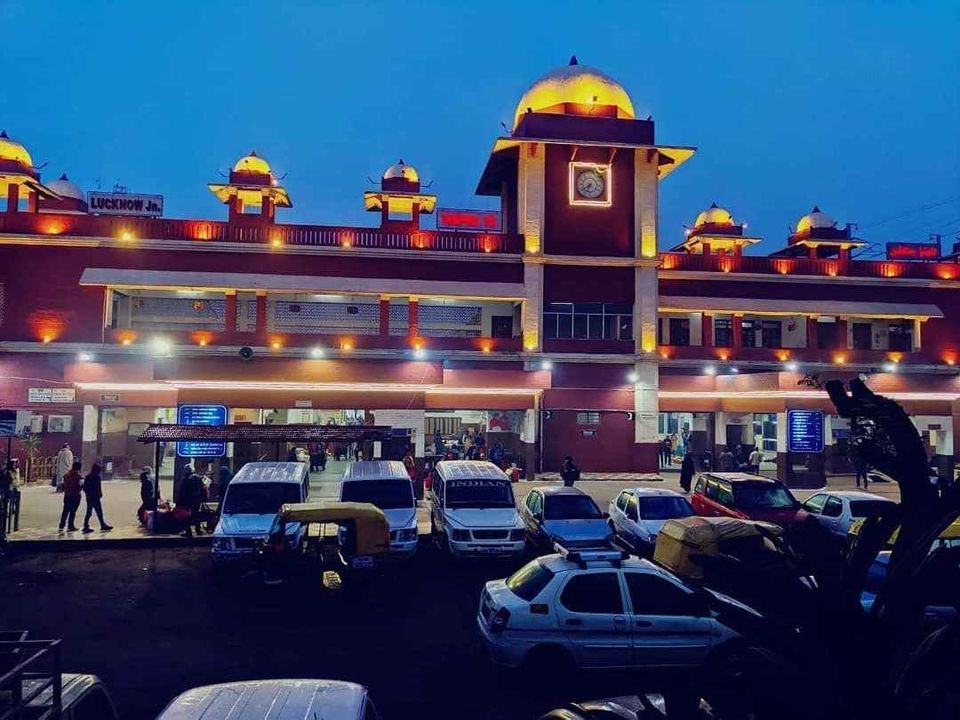 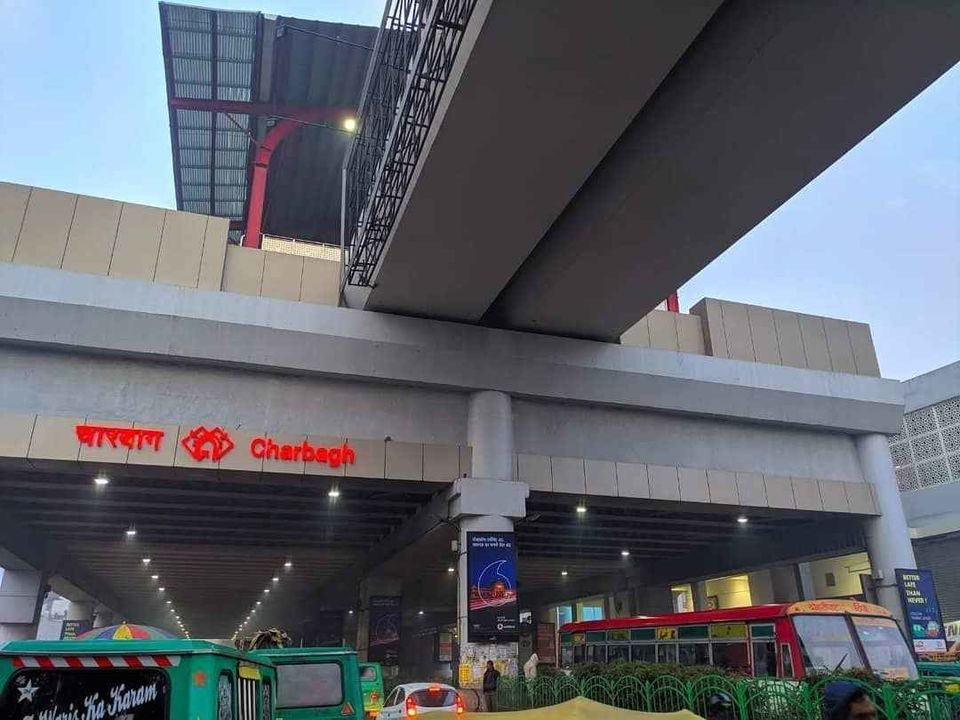 The sublime taste of Makhan Mallai 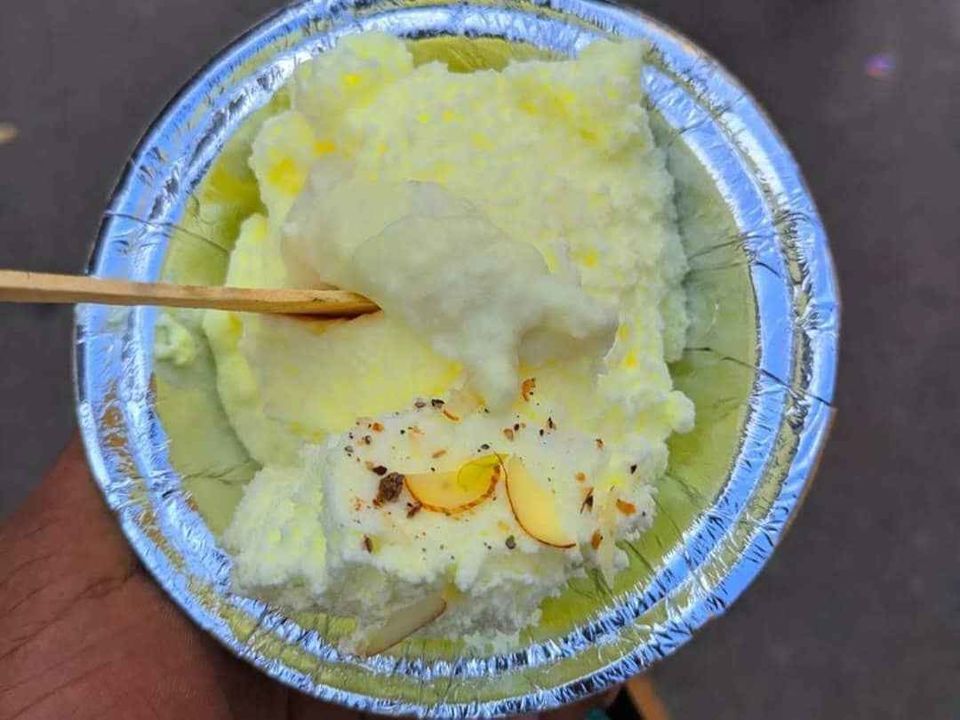 This day was more of a commute day. I left Lucknow during the afternoon and took a bus which took about 2 hours to reach Kanpur. And in the first hour itself, the colour of my shoes turned from blue to red ( Yes, you can smile a bit if you got the pun here). As the situation in Kanpur was also worse, I refrained from exploring much of the city. So, I headed to the nearby mall, enjoyed some local cuisine and went to the station. The Kanpur railway station is one of the busiest railway stations in the country as it links major eastern cities to the national capital. I spent the whole evening exploring the whereabouts of the station and trains that passes the city. I had a train to Varanasi which was scheduled at night. I was extremely excited as Varanasi was the centre of attraction of the whole trip.

Passengers hurrying up to catch their train 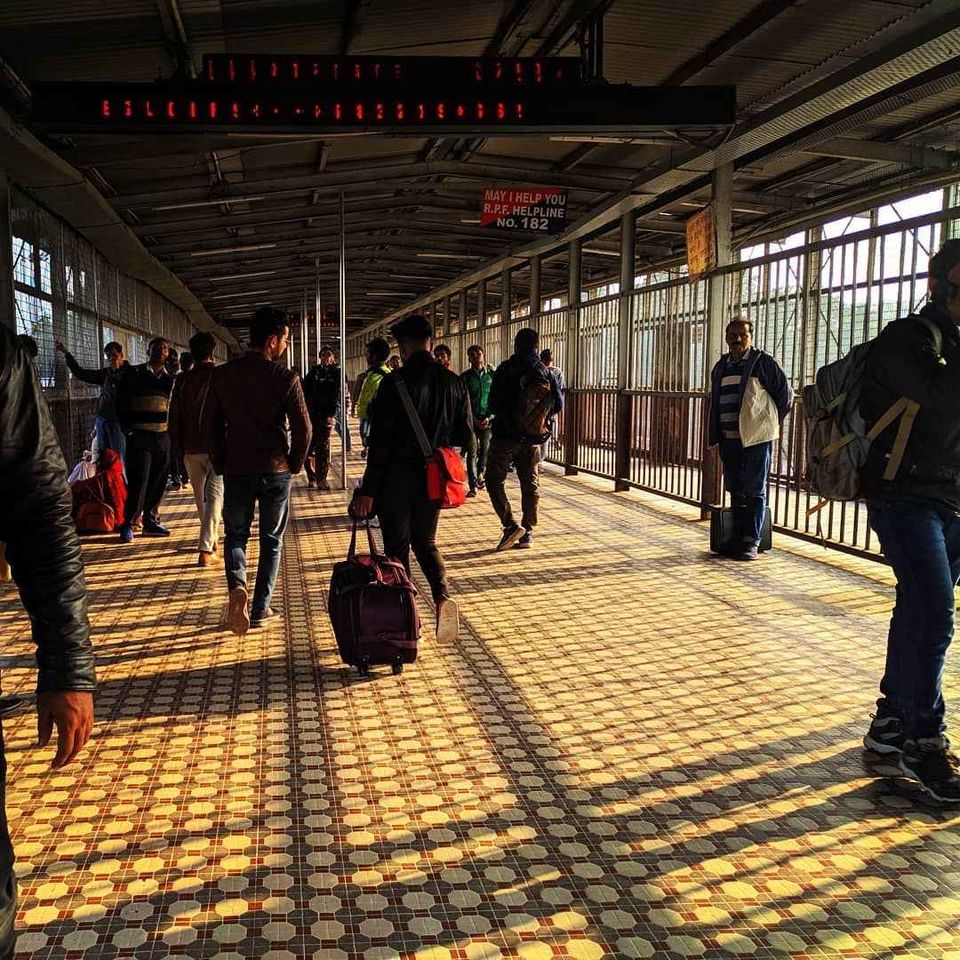 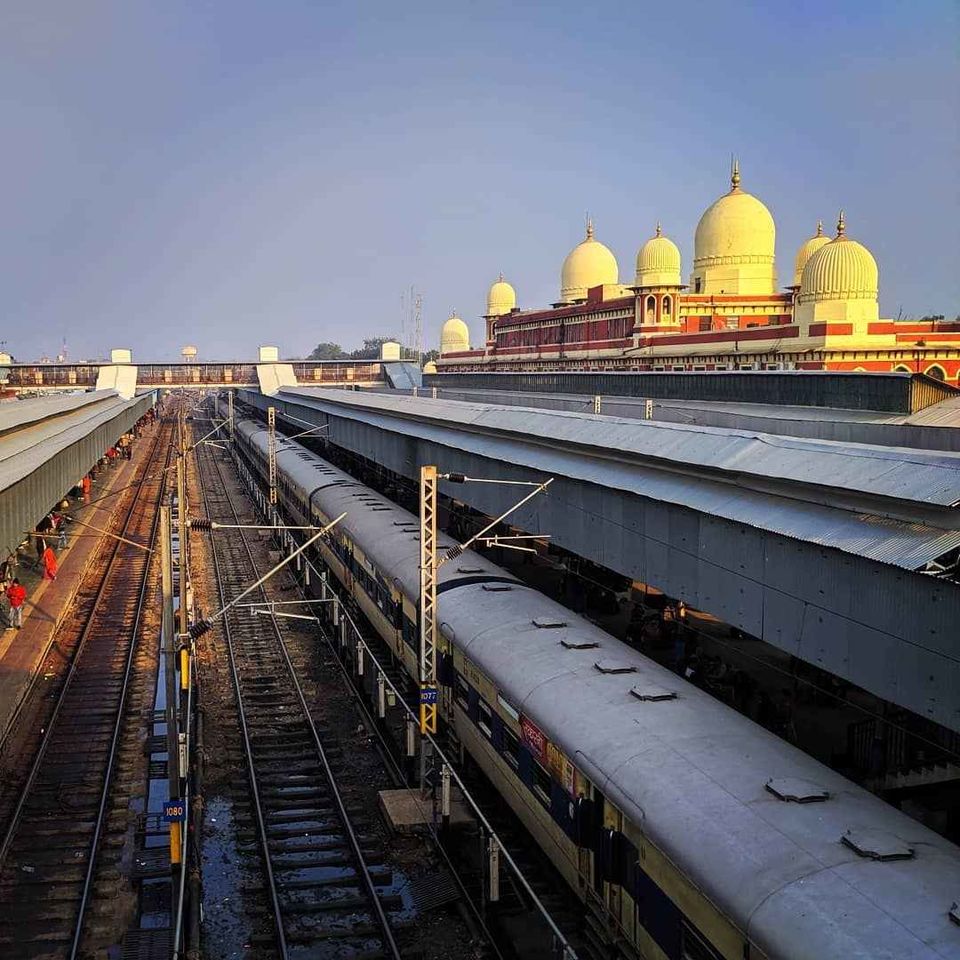 Near a mall in Kanpur 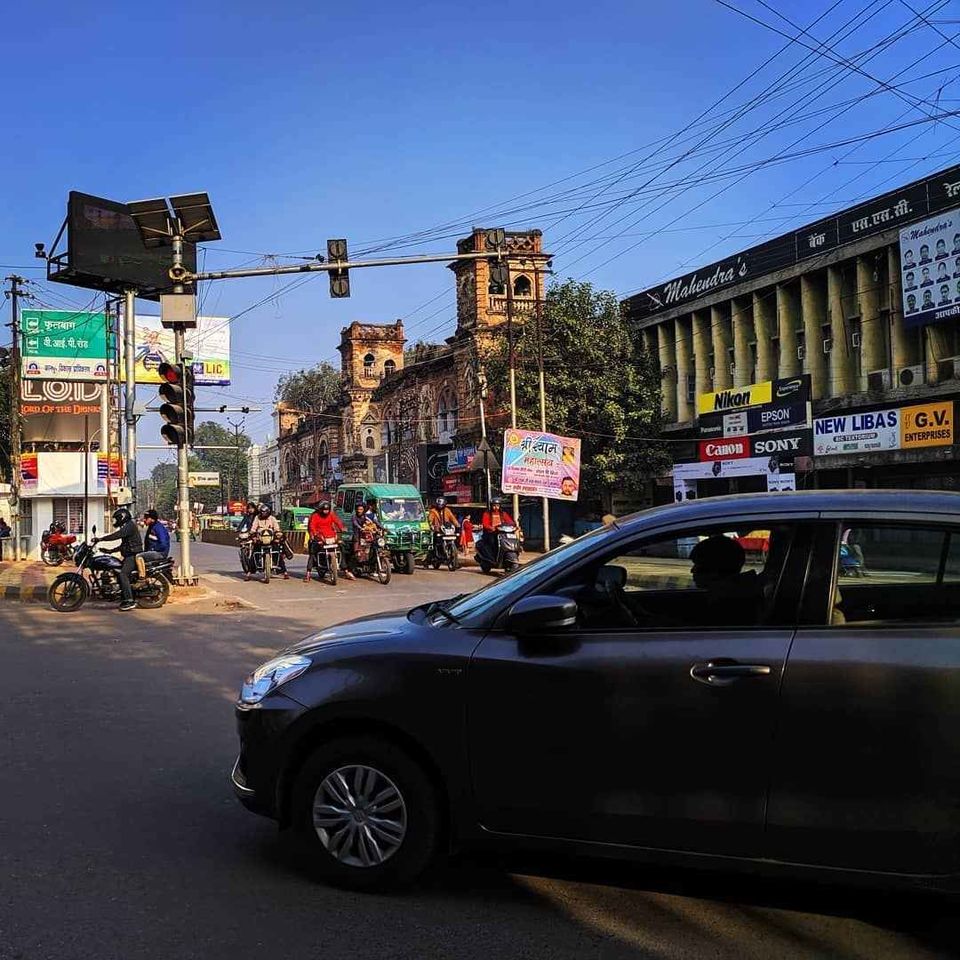 I woke up in Varanasi, the next morning. The vibes were extremely surreal. I took a cab to the hostel where I had booked my stay, got freshen up in no time and directly headed to Dashashwamedha ghat and what I saw is difficult to describe in words. There are hundreds of thousands of people in the ghats but if you sit at a place and stare all around, you can find peace and serenity in the commotion. I sat there, saw the boat drivers and pigeons accomplish their daily errands and tried finding the answers to the questions that I carried all along.

There was 5 solo traveller who accompanied us for the city tour. One of them was from Taiwan and he was 38, the second one was a brave young girl from New Zealand who was solo travelling at an age of just 19. The third was a teacher from Bangalore who recently came back from a Spiti trip. The fourth was a management professional from Mumbai. The last one was from the Netherlands who was a swimming instructor in Dubai. You might think why I am describing all of them but the point is when you explore a place along with strangers with such diverse profession, you get to hear a lot of experiences and ultimately you learn a lot of life lessons.

We went to Mukti Bhawan and it was such a divine place. People during their last phase of life come here just to take their last breaths in this holy land of Varanasi because it is believed that you get Moksha if you die here. Then we made our way to Manikarnika ghat and found a place to sit and observe things. I asked a local and he said that at every 15 minutes of interval, a body is cremated in Varanasi and this made me go numb for a while. Undoubtedly, the questions about life and death that I used to ponder has now found some answers.

It was almost evening by then and we were all set to take a boat ride to Assi ghat and experience one of the most beautiful sunsets of our lives. As the sun went down ending its daily errand, the Ganges shone like gold and our eyes twinkled at such a tranquil view. It was now time for the ganga aarti and what I witnessed is difficult to express. The aarti had such energy that every individual was high on spirituality. After seeing this, I thought maybe this is why the river Ganga is called "holy". After this, we went back to our hostel and we all were wearing a smile.

Morning view at the ganges 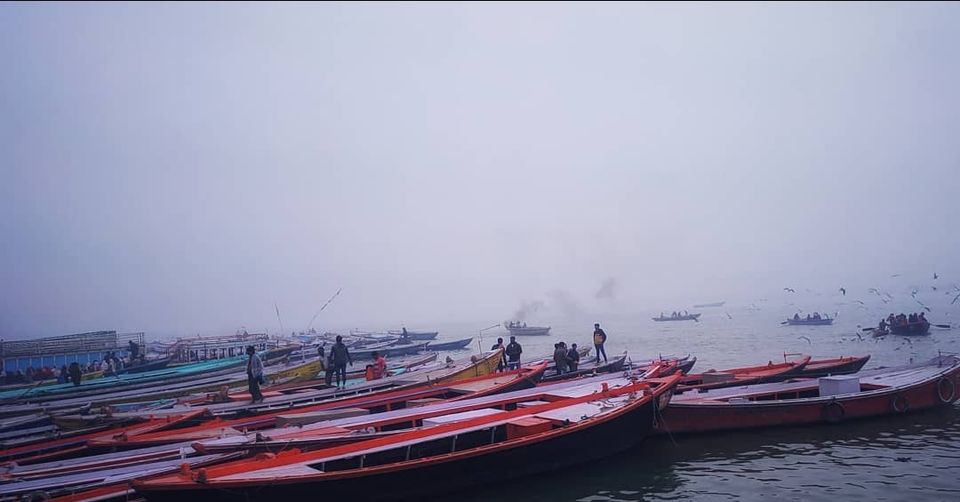 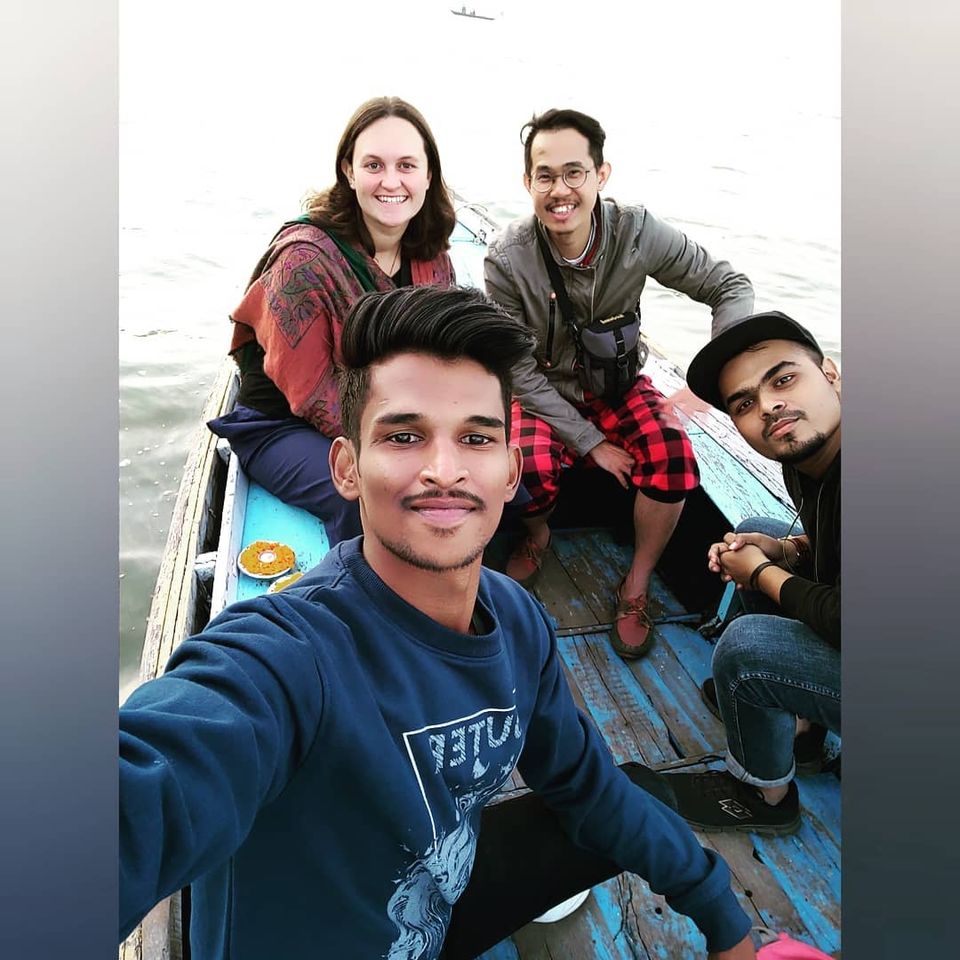 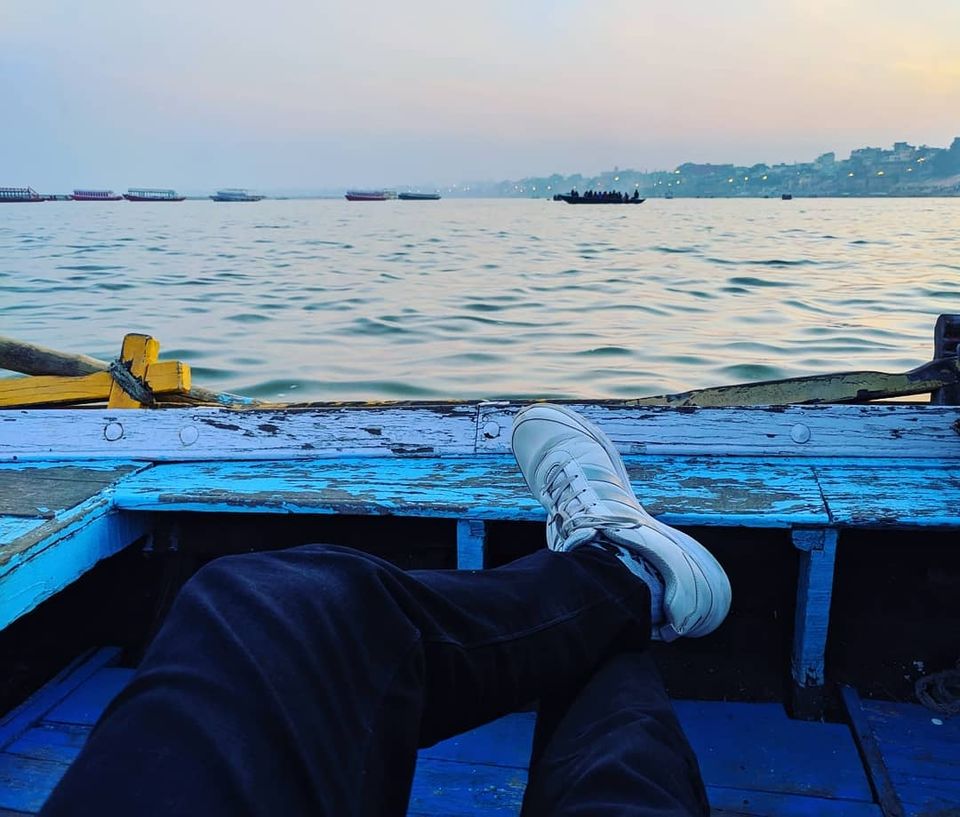 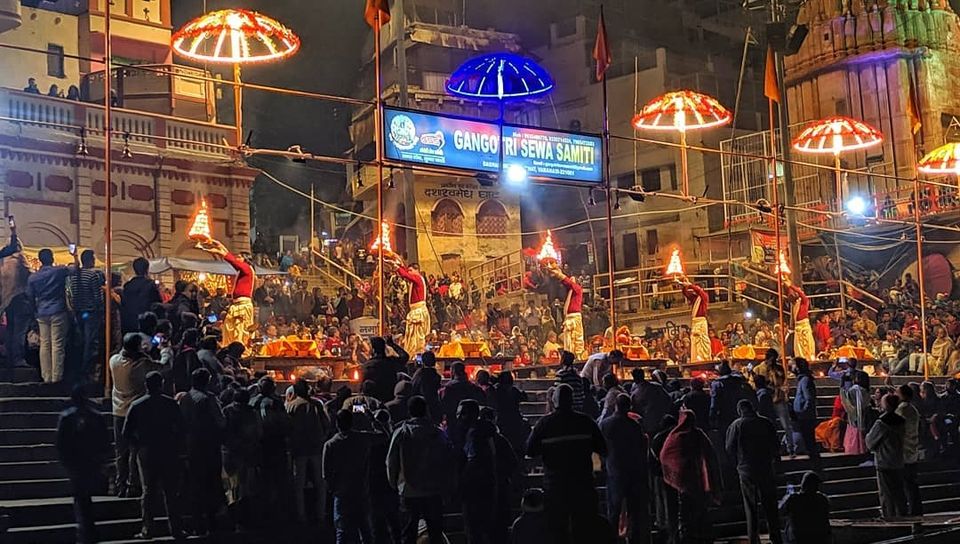 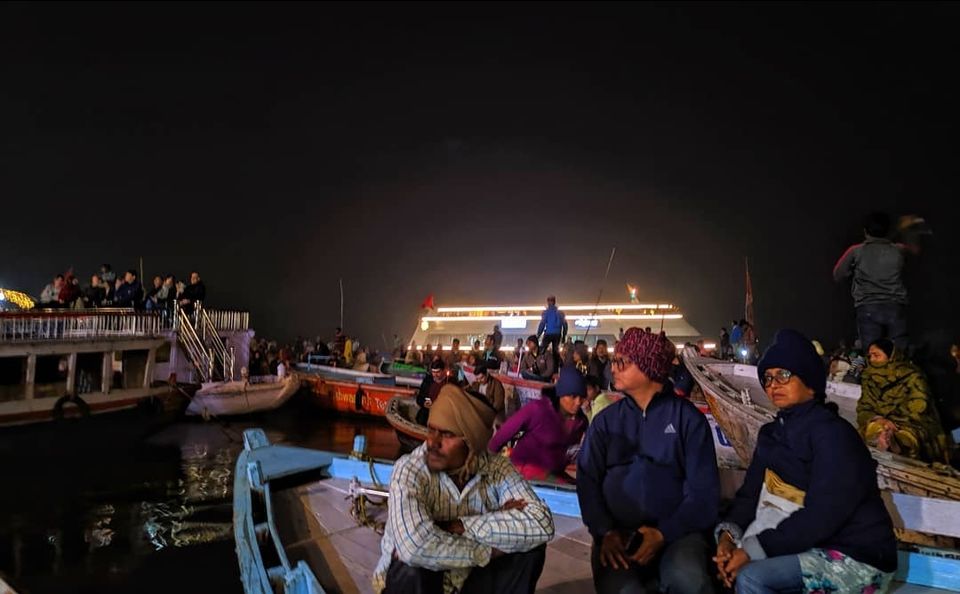 Normally days start in the morning but for me, this day started at the stroke of midnight. I always wondered how these ghats would look at night. So, I went out along with two other strangers and I saw a different Varanasi. During the daytime, when there is a gathering of lakhs of visitors, it was empty now. All we could see was the lights that lit the ghats and the empty boats that were parked at the corner. There were few babas who had made their shelter and were praying in the cold. We walked through the ghats, felt the vibes and returned at 3 in the morning.

When you travel, you can't sleep in peace because you are extremely excited to explore and your mind asks you what's next? So, I couldn't sleep much. I got up early in the morning. We headed out to explore the Kashi Vishwanath temple which is located inside the Banaras Hindu University and luckily there was a convocation ceremony going on. Each student was dressed in typical Indian attire and it was an amazing view. We explored the temple, prayed and got back early because we had a train to catch. In a couple of days, I got so much attached to Varanasi that it was difficult to leave but on the other hand I was eagerly waiting to witness Christmas in Kolkata.

A serene night view of ghats of varanasi 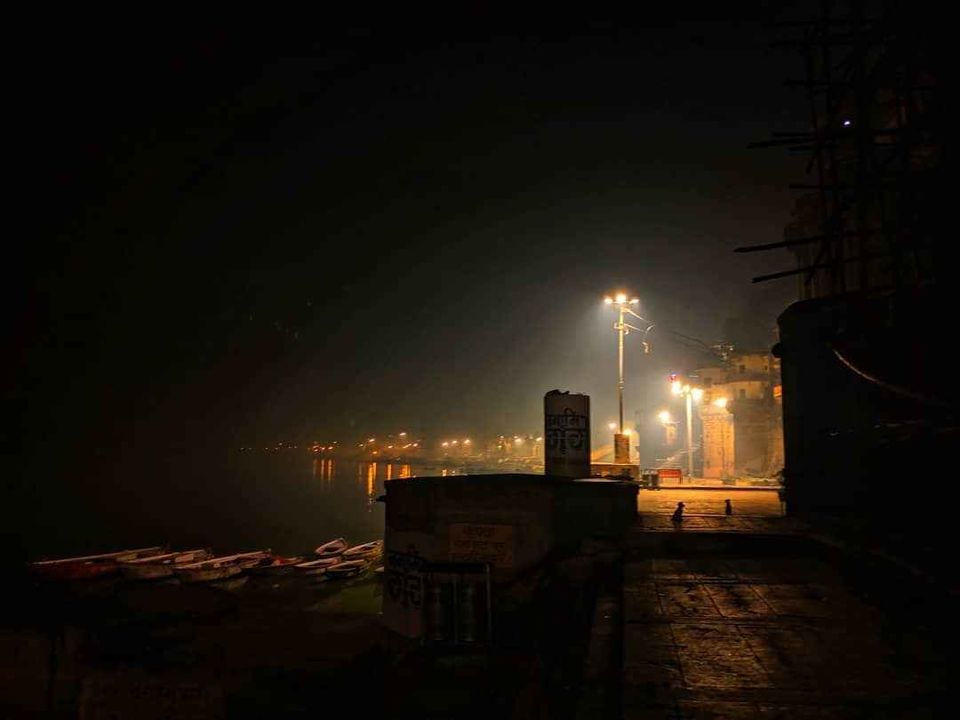 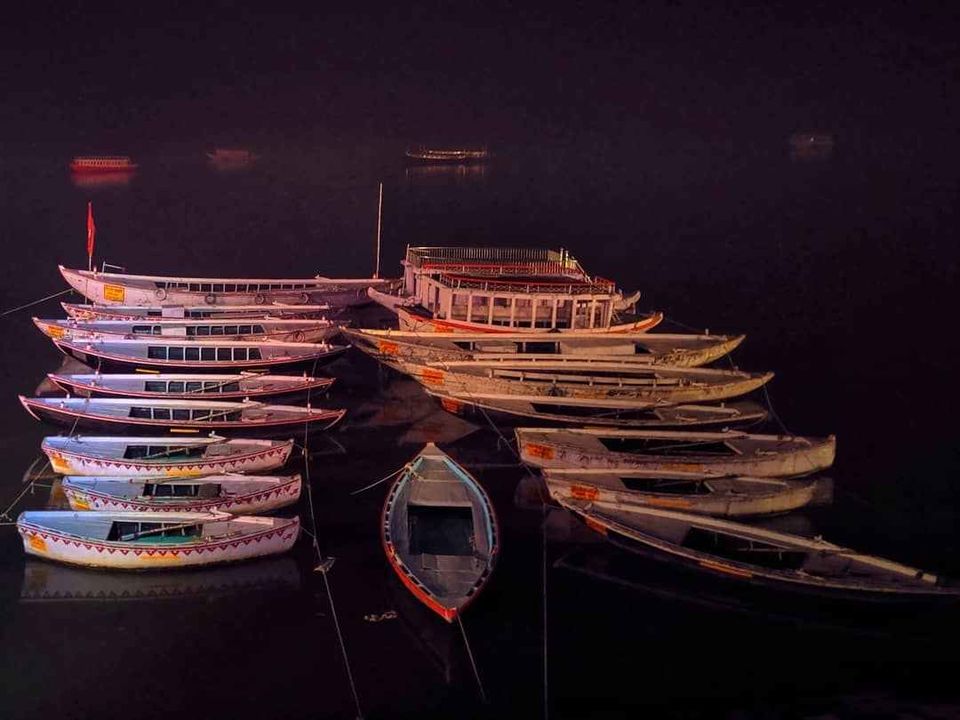 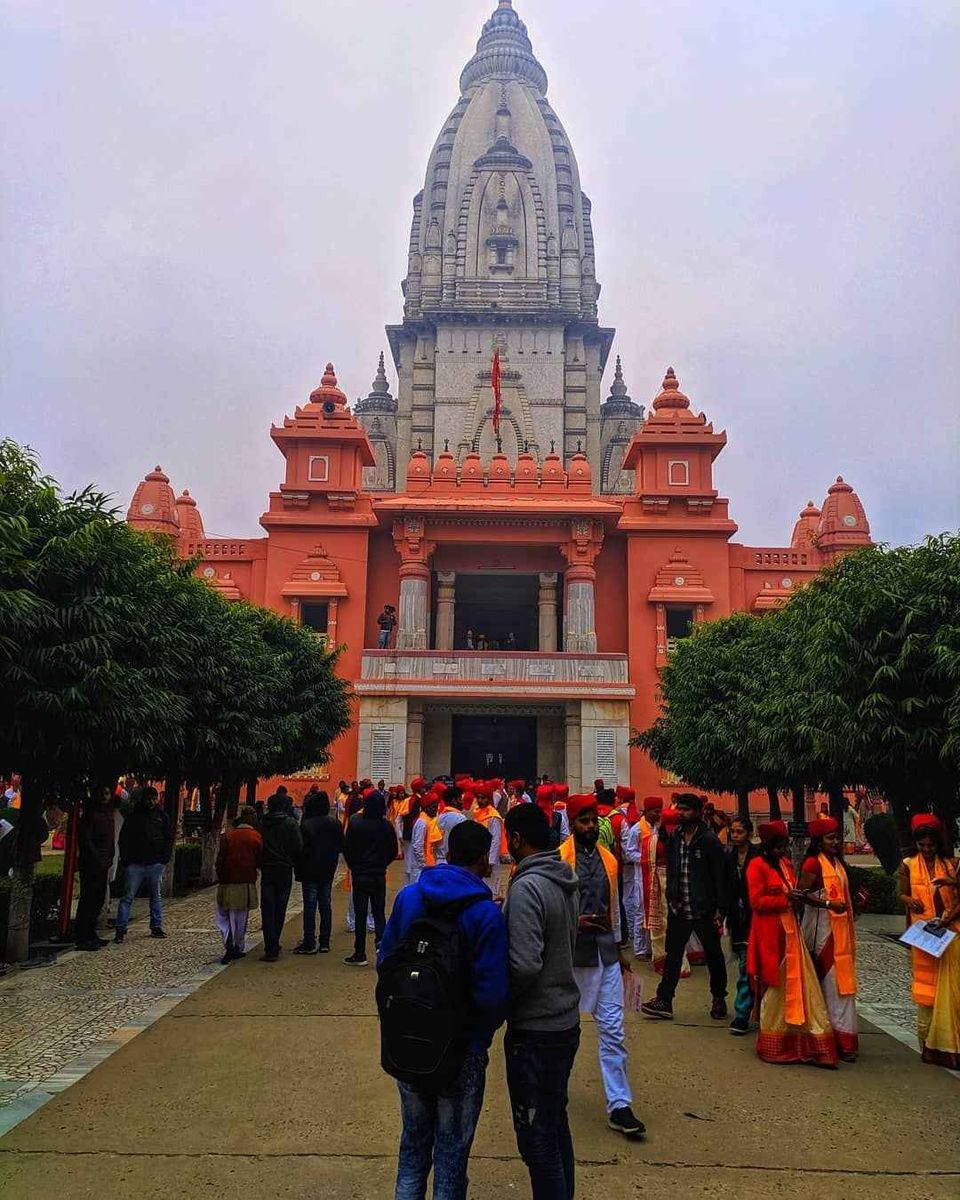 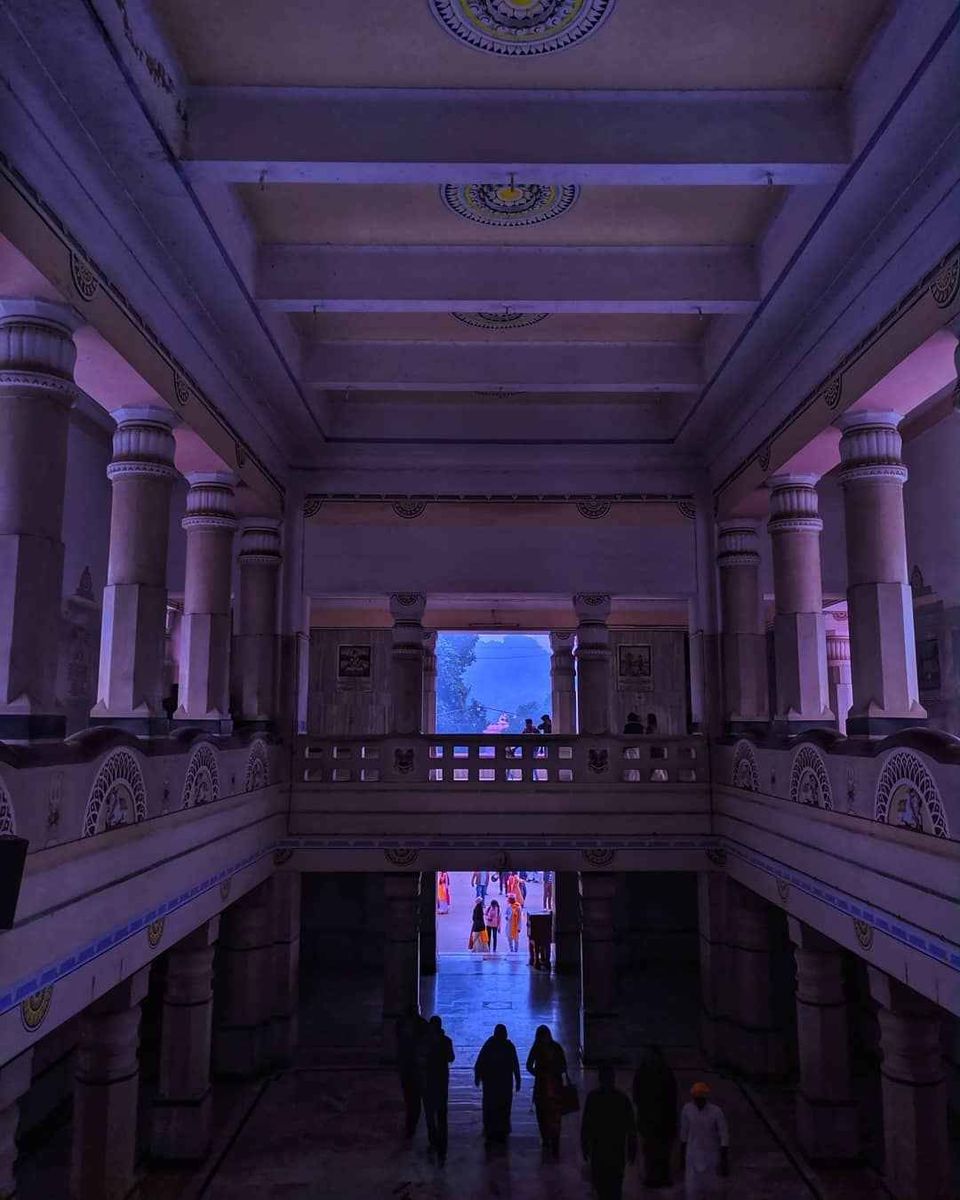 I was in the city of joy and most importantly I was here on 25th December and without wasting time, I headed to Saint Paul's cathedral church. It was all crowded and there existed a long queue which extended a greater distance outside the gate. Although there was chaos, the vibes were something to be happy about. People were wearing Santa hat and all I could see was love and happiness.

Then we headed to Elliot's Park and then moved to the most-awaited Christmas Eve at Park Street. As we entered, the lights casted a magical spell on us. People were enjoying the festival with great pomp and show. And all I could think about was "Did I ever feel this kind of happiness before"? It was an evening which is very close to my heart. I would suggest everyone experience Christmas atleast once in Kolkata and I bet you won't regret it.

A busy day at Howrah Bridge 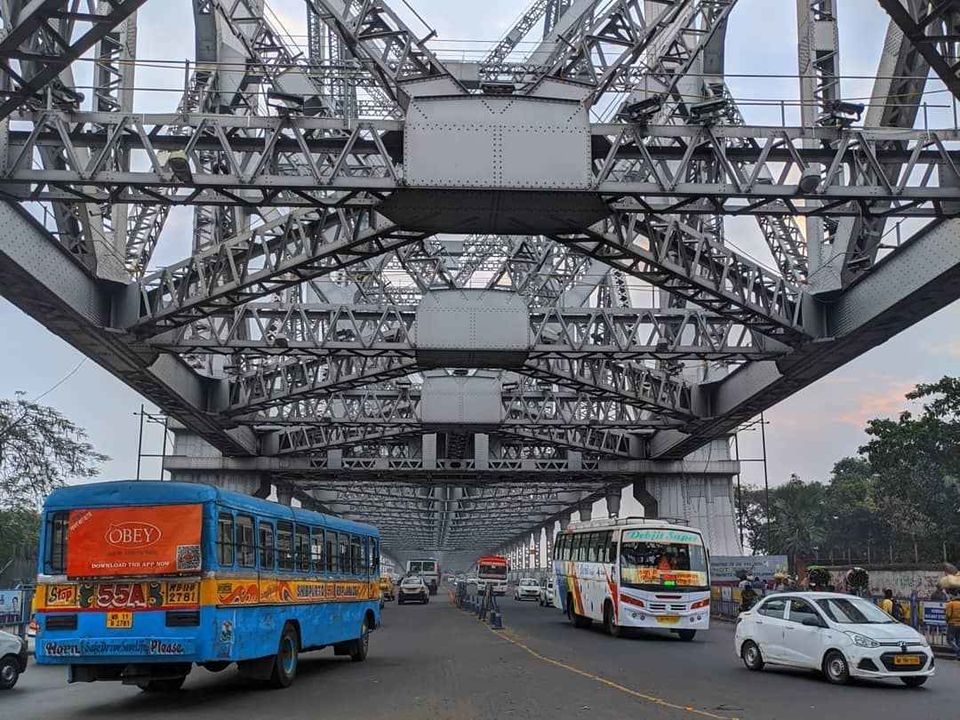 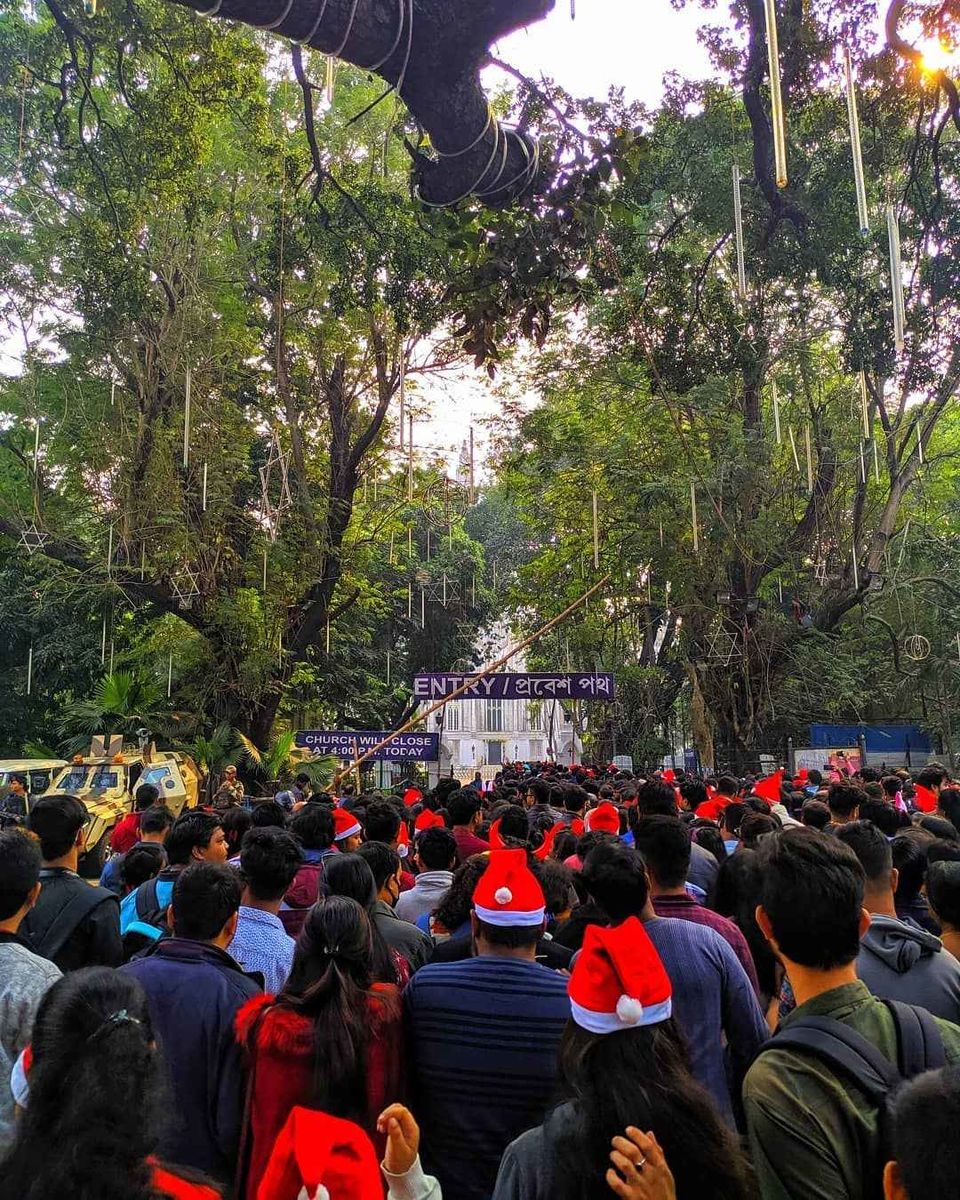 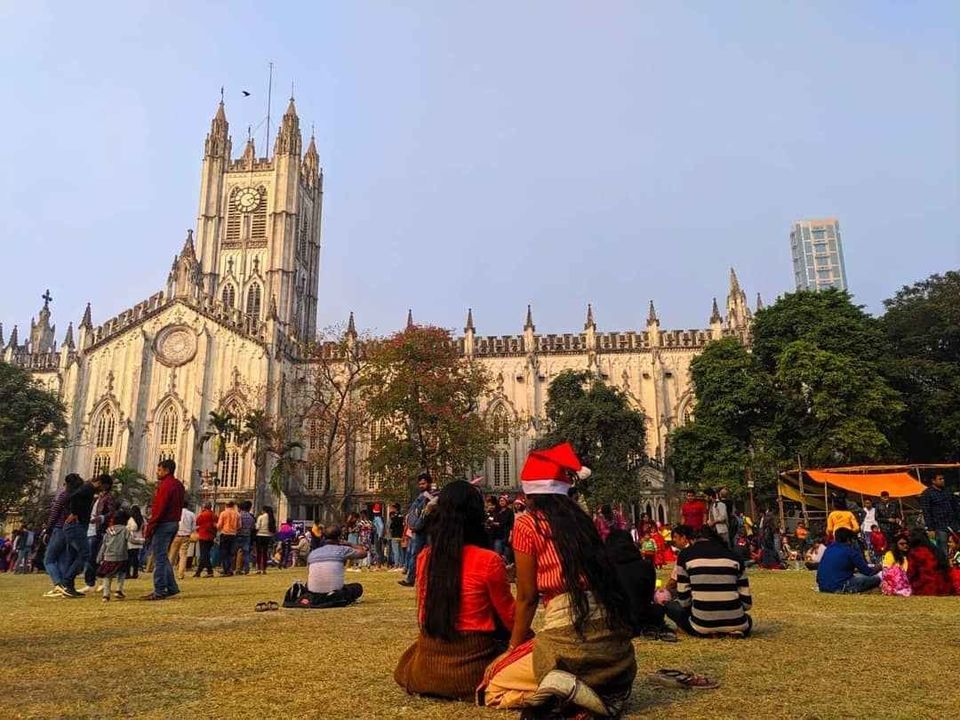 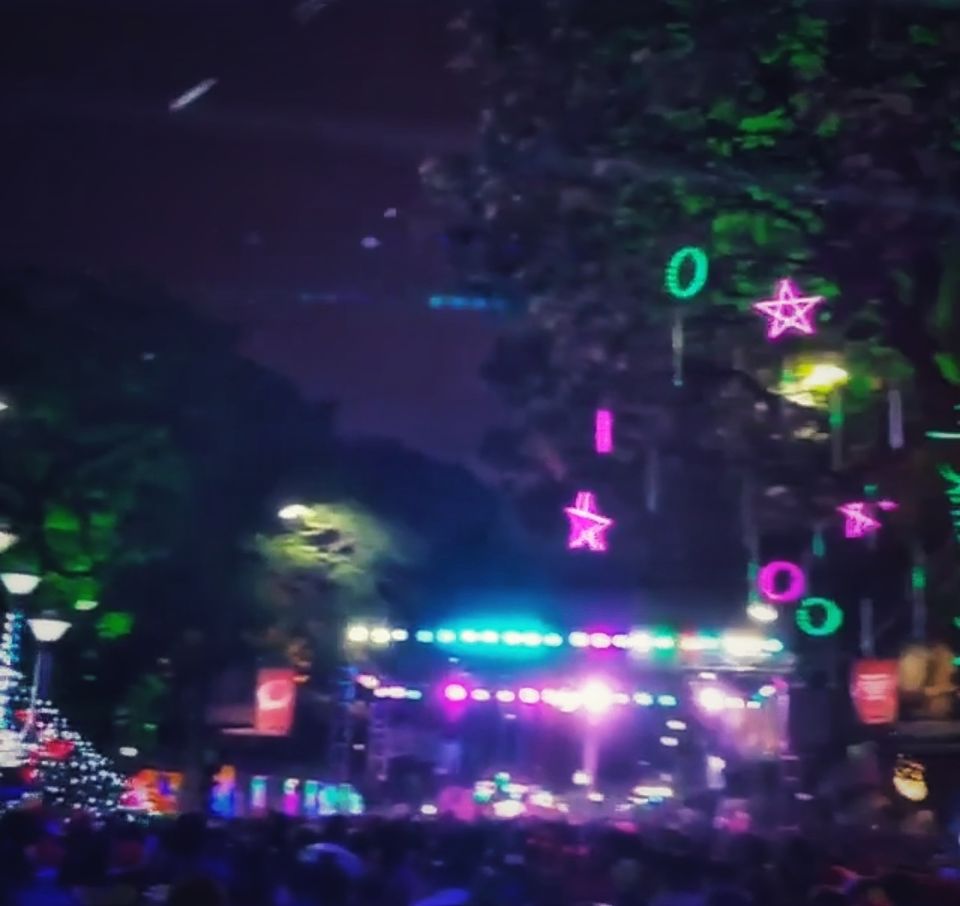 So, this was the last day of this long and diverse trip which made me explore the whole of Gangetic plain and ending it at Kolkata. The complexions of Kolkata city is impeccable. This is the first thing that persuades people as soon as they visit this city of sheer joy. You can synchronize your heartbeat with that of the people who carry with them their jovial nature on these streets. Contemplating the sun-kissed buildings of elegant British architecture is a delight to gaze at all day. As the sun commences to end it's a day-long errand, it makes sure that people plunge in love with the twilight and their life. Finally, I would like to end this with a short poem that I wrote:

The leaves were loathed in scarlet texture while the sky was reflecting azure blue,

O, I wish I could tell you more about the winter of hue!

There was utter silence of humanity,

While the birds sang their song of superiority,

So pleasant and tranquil that it made the humans look above,

And blush in the name of love!❤ 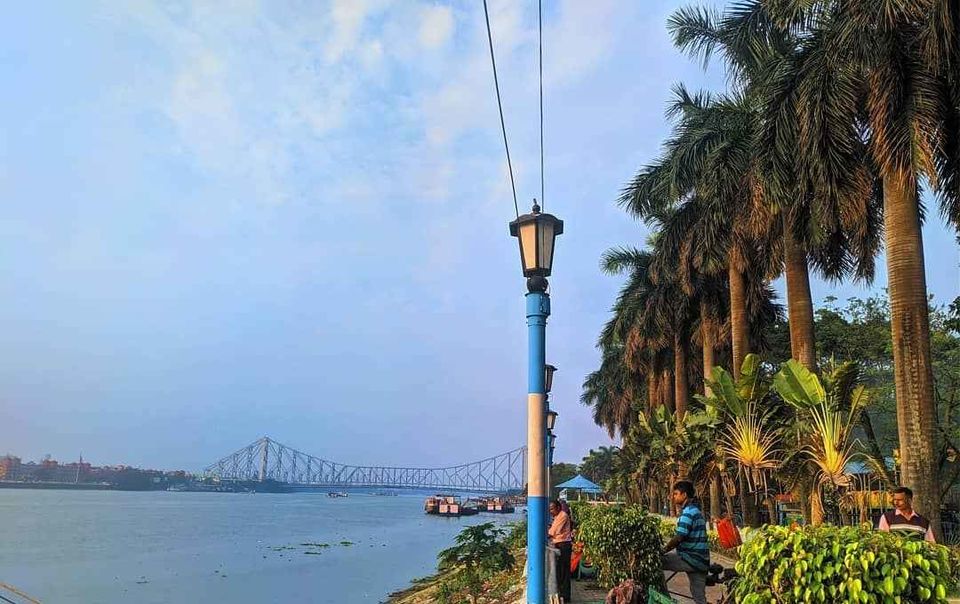 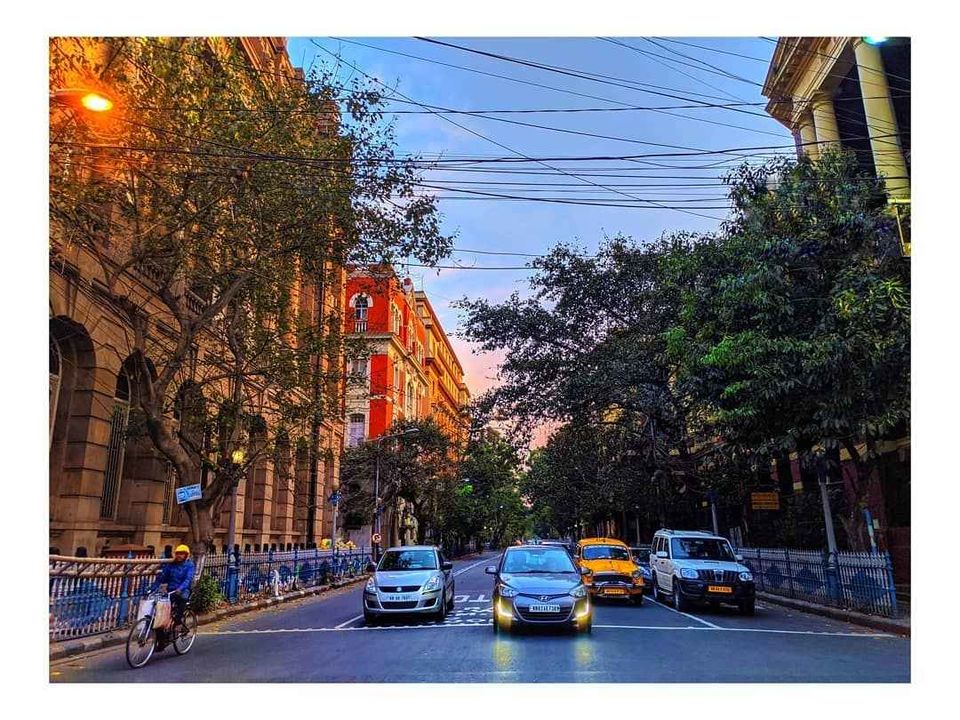 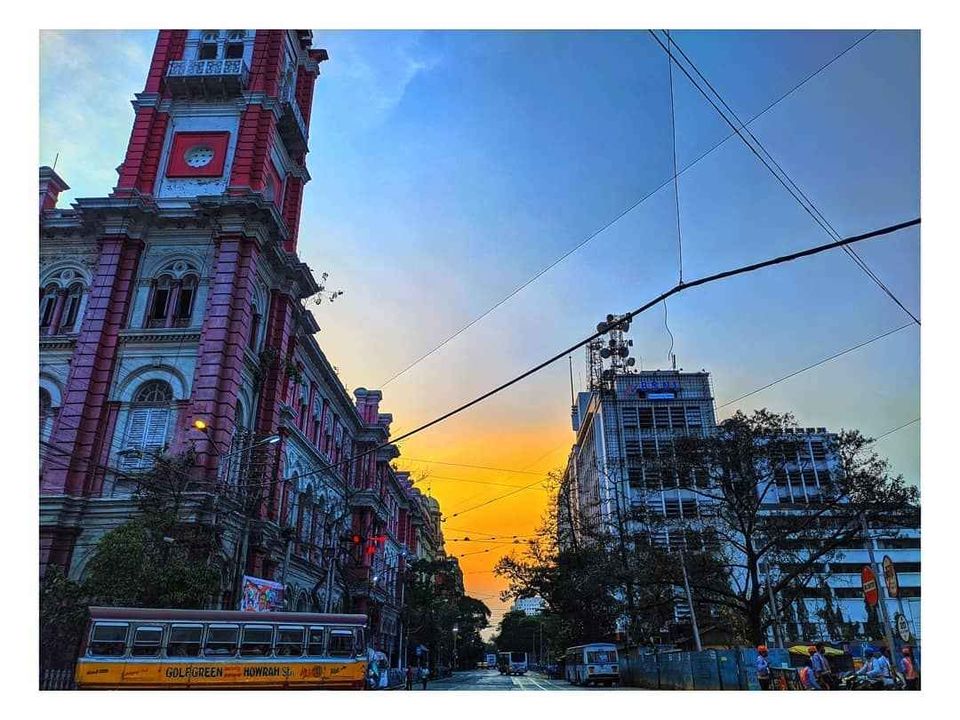 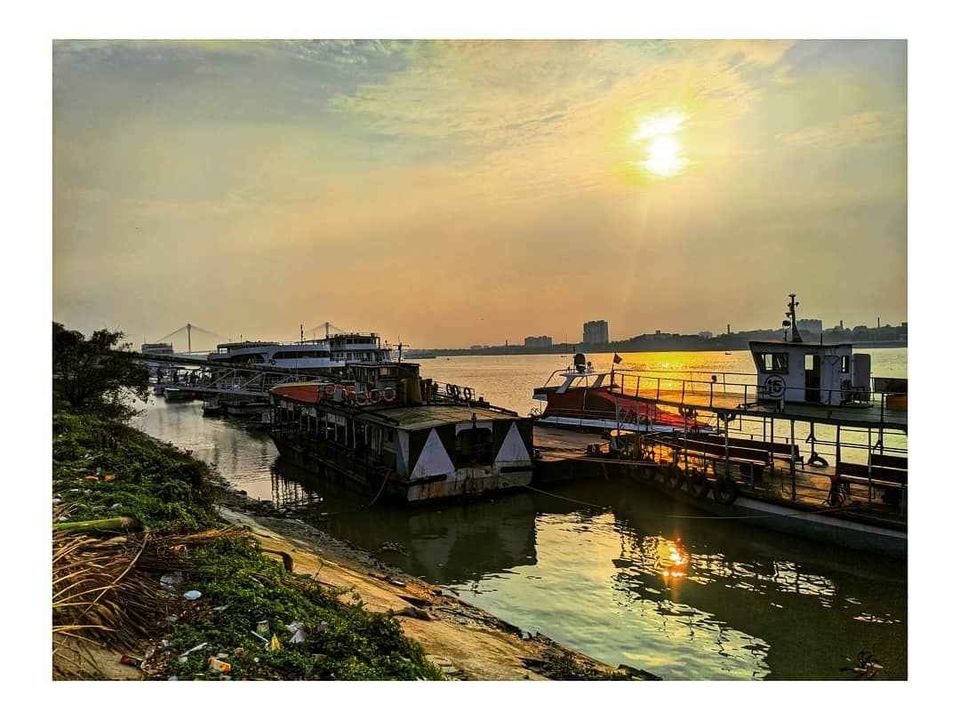 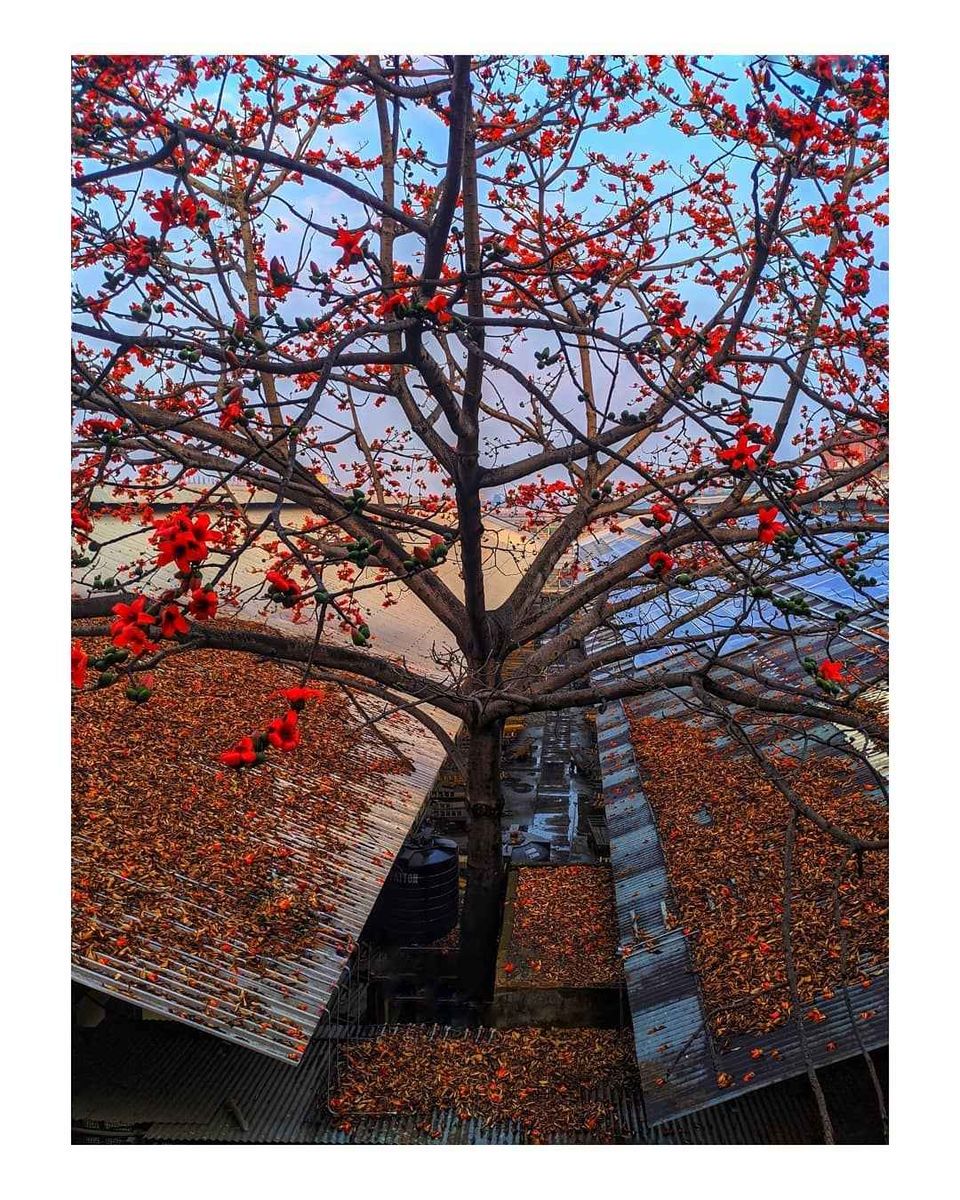