A Road Trip to Konkan - from Konkan Diaries

“Traveling—it leaves you speechless, then turns you into a storyteller.” ― Ibn Battuta

This quote proved right with the Konkan road trip. It was all started with the four day long weekend which making us curious to do it more happening. Since I was not able to go home, thanks to the never ending waiting list of trains, I jumped into the plan of Konkan road trip. Two cars and seven people, all crazy. We decided to cover the coastal strip bounded by giant Western Ghats on one side and magnificent Arabian Sea on the other.

The pleasing strip with picturesque beaches, small hushed villages and wonderful coconut trees. It was a sheer bliss to witness the beauty of Konkan.

The day one started with our journey in the morning of 24th March, Thursday – Dhulivandan day. When people were playing with colors, we were enjoying the colors of nature. We started with NH3 and them came on NH66 till Chiplun and then all the way to Guhagar beach. Since it was a long weekend and road is narrow, we were stucked in the traffic near Vadkhal naka. After that it was all fun. 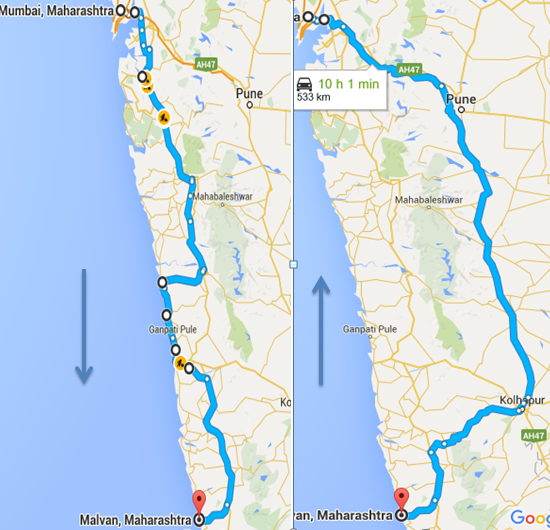 The road is mystical, bounded by greenery. It was evening till we reached Guhagar beach. The beach is beautiful. The sunset at Guhagar beach with coconut water, what a splendid evening! We searched for good hotel to stay and MTDC resort became our savior. It was clean, good and equipped with basic amenities. 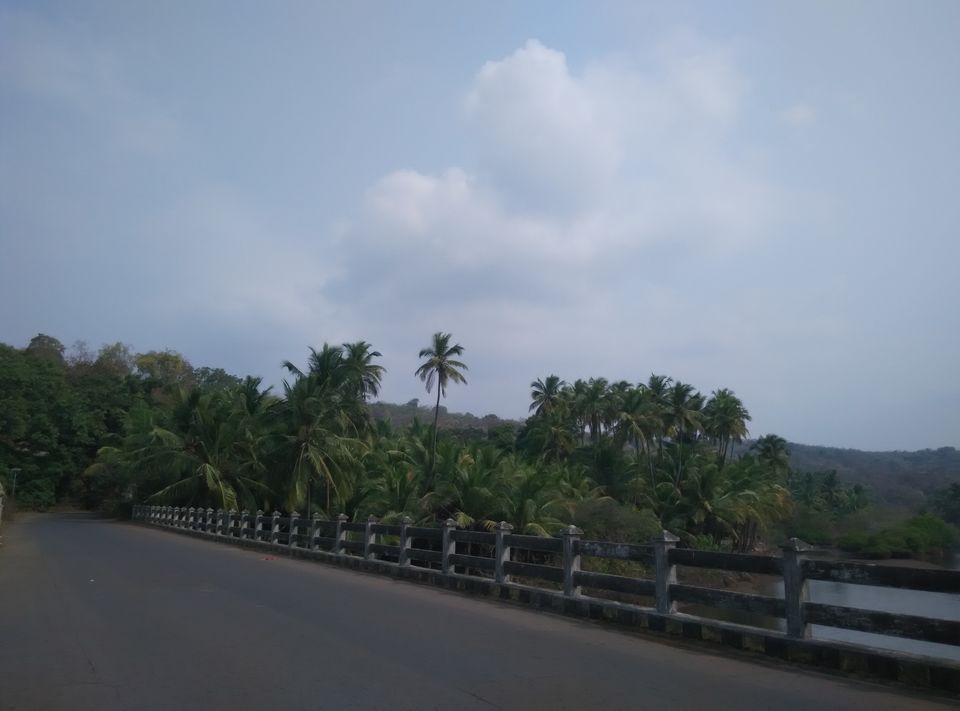 The day two was of coastal route and more exciting. While passing through the village roads, it was fascinating. What a feeling to have a fresh kairi by the en-route.To reach Ganpatipule, Jetty services were available to ferry people and vehicles from Tavsaal in Guhagar taluka to Jaigad port. It took around an hour to cross the 10 minute ferry travel as there was only one ferry for to & fro. Though we enjoyed that time too, the view at Tawsaal Jetty in the morning was lovely. Misty airy marine blue sea mesmerized us. 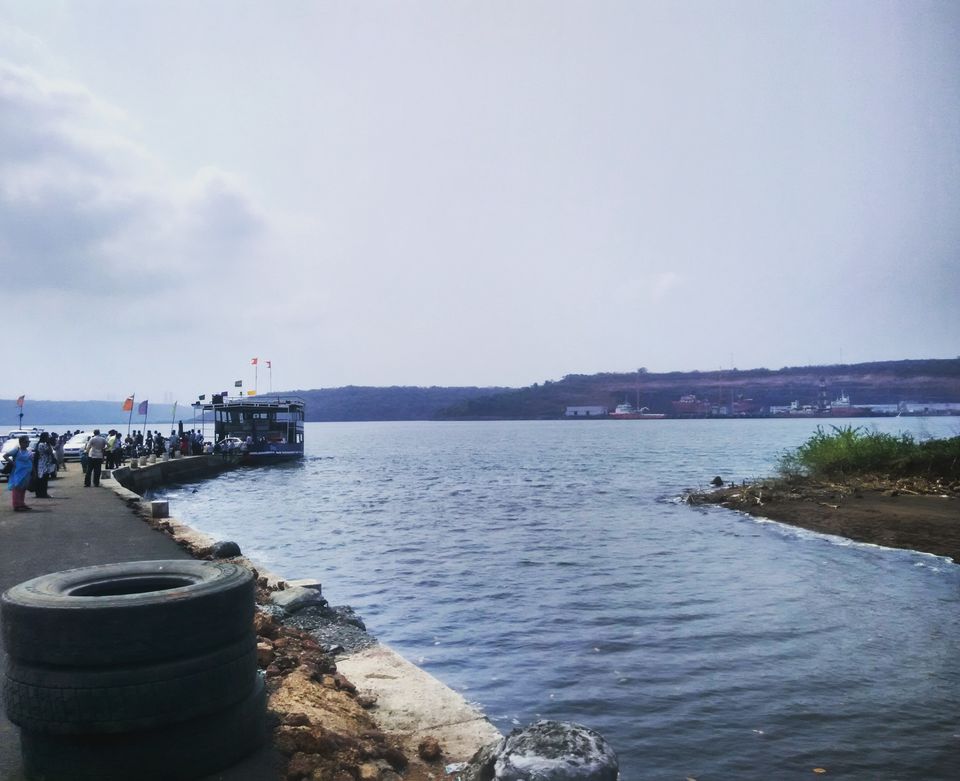 Through Jaigad jetty we drove all the way to Ganpatipule. In between, we found many beautiful beaches – clean blue water, white sand and all lonely. One of them is Neware beach clad with white sand – beautiful, tranquil. The seashore has its own enigma; nothing was ours except the essential things – air, dreams, the sea, and the sky – all things tending towards the eternal or what we imagine of it. 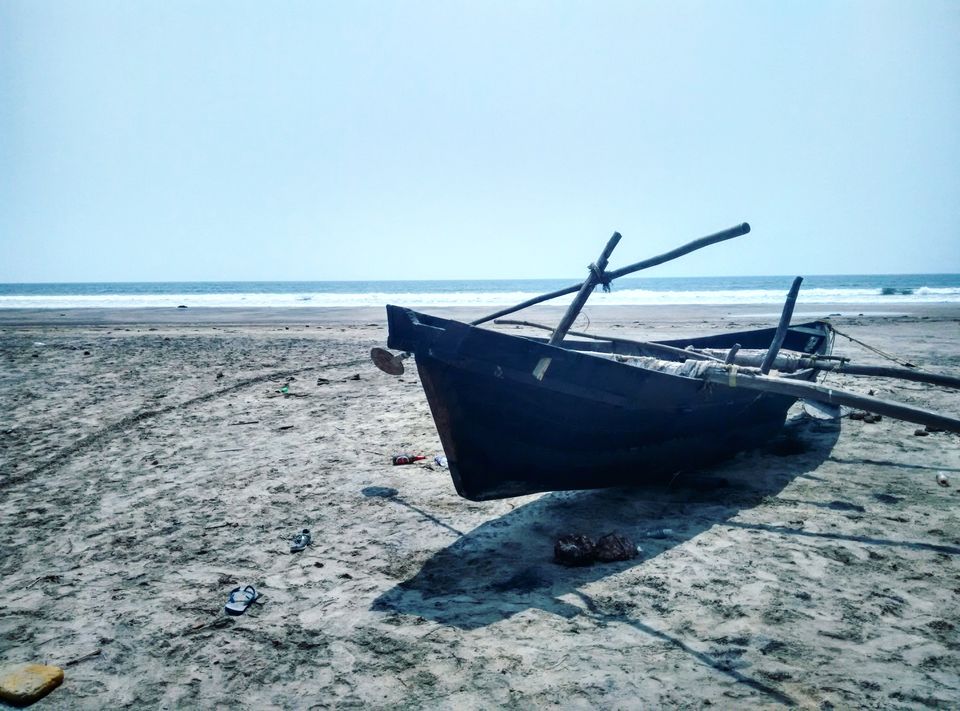 At Ganpatipule, first we had a lunch at Malvan Katta. Since I am a vegetarian, I can assure you that it was one of the best homemade veg thali I ever had. Simple, not oily, not much spicy. And the best thing was solekadi. It was amazing. Must to visit sort of place.Then we headed for a mandir. It is wonderful temple crowded though, commercialized place. The scorching sun had withered us totally. And the savior was the tempting ice gola. In the hot sunny day, we moved from Ganpatipule to Ratnagiri. There we tasted the Haapus aamba. It was yum. After a long bargain we could able to get it. The day ended with a stay at Kankavali. The drivers were tired, so no option to go further. 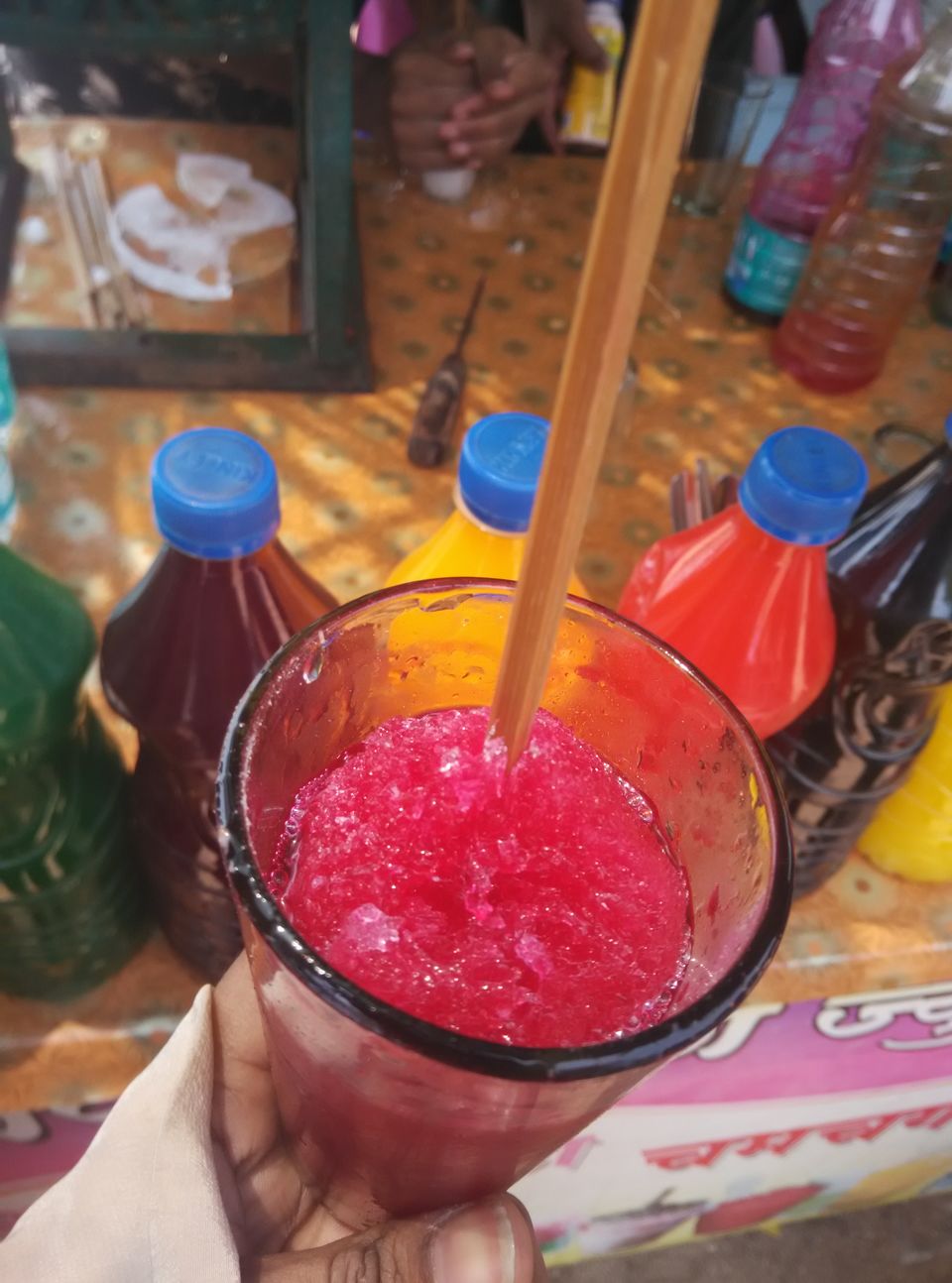 As more days were coming by, the fascination and energy was going up. The adrenaline rush pumped us at the fullest. This was obvious because we were heading for a long-awaited adventure of scuba diving. It was an hour drive to Tarkarli from Kankavli. The road near Tarkarli is next to the Karli River which is famous for boating and Dolphin point. But here unfortunately we could not able to see any dolphins such. Once we reached there, we found out scuba diving is not carried out at Tarkarli. It is carried out at Devbag or Malvan. Thanks to the instincts for turning our cars towards Devbag for scuba diving. Because we realized when we reached Sindudurg fort that scuba diving at Devbag was much better than the one at Malvan . At Devbag, there was a kutcha road, all bumpy and too narrow and the movement was two way. At Mahapurush Water sports, they have good parking facilities. After a long bargain session, we somehow managed to convince them for Rs.1200. And hell yeah, it was a good bargain from Rs.1700 to Rs.1200. And the much awaited excitement grew up more wilder when we arrived at the shore. Raghu, the manager showed us the video of scuba diving and we were fascinated with it. The time had come to board a boat. The boating lasts for around 15 minutes. It took us 3 to 4 kms inside the sea. What an enthralling view it was! Blue water blue sky fresh air…!! I am scared of water. And going 20ft deep with no oxygen is scary. The time had come to overcome the fear. To dive in and enjoy the beautiful creatures that God has created deep inside the sea. The instructor gave us the instructions of how to hold oxygen pipe and breathe and taught signs for “All Okay”, “Up”, “Stop”. We did some practice too before going 20ft down. Then once all set Okay, the instructor dived me all down to the corals. The view was striking. The sunrays upwards and the corals downwards. I was awestruck with that moment. The fishes were swimming all around me. No words to express the feelings. Since I was wearing lens and instructor told me that goggles would be the waterproof one but somehow water went into the goggles. After sometime I was scared that water should not go into my eyes. I told instructor to take me up. I cannot take risk with my eyes…LoL. The feeling after the scuba diving was the same of Hritik Roshan’s post scuba diving in Zindagi Na Milegi Dobara. 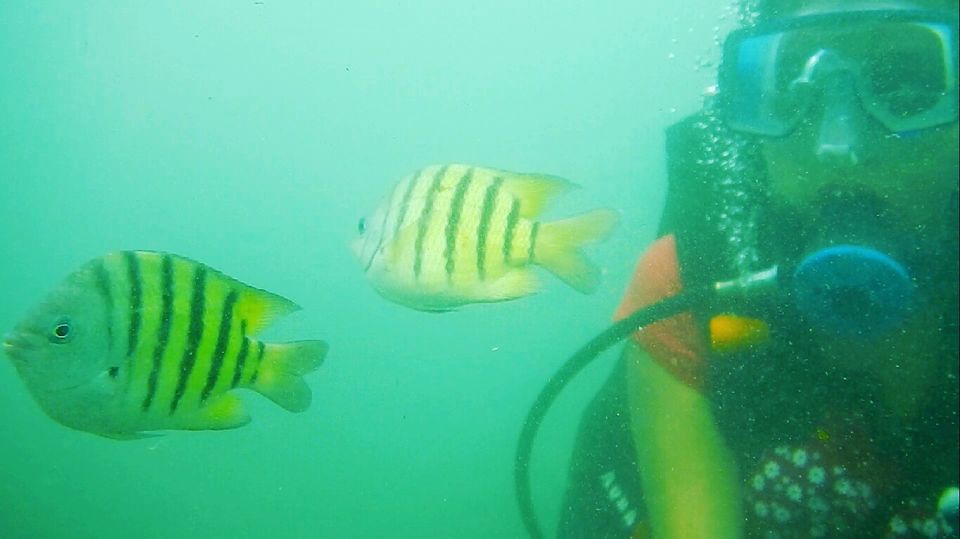 After the diving, we were all hungry. We all jumped into the homemade food again. It was again awesome. Time for the Sindudurg fort, we drove all the way from small, dusky , green clad roads to Sindudurg fort. We reached at 5 O’clock. We hopped into the boat again for the fort. Since it was an evening time, the view at the fort is beautiful. There marine blue sea engrossed us in its charm. I was lost in my feelings over there. The silence and serenity left me completely lost in the surrounding. A must to visit place. It was late in the evening. We had planned to start a return journey to Mumbai, but no one really would like to and it was already late to start with. So we took a homestay at Tarkarli. 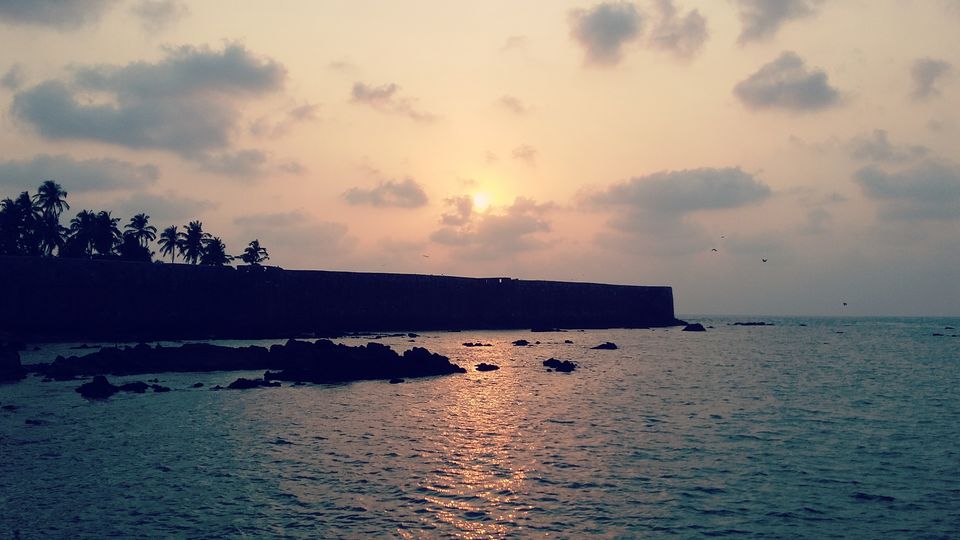 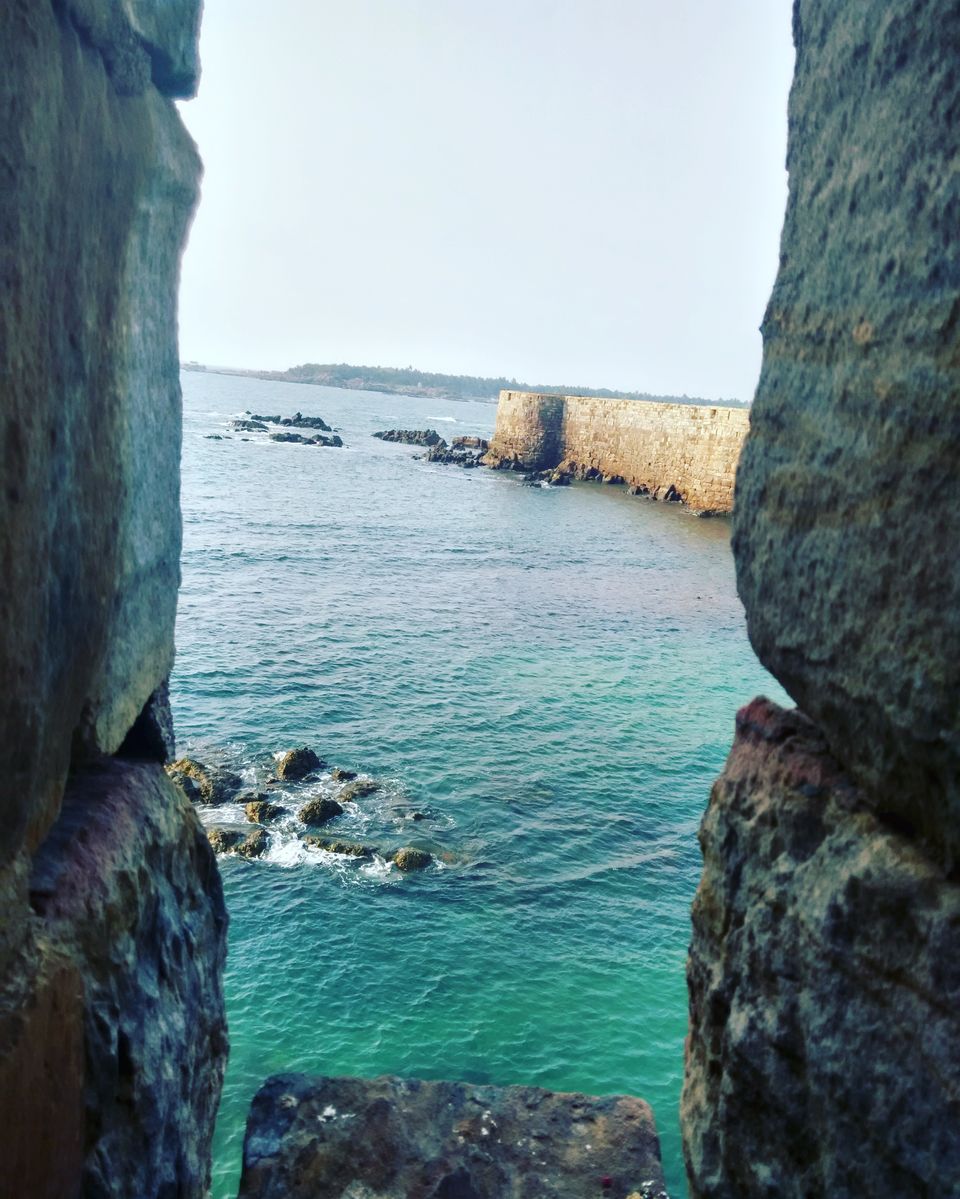 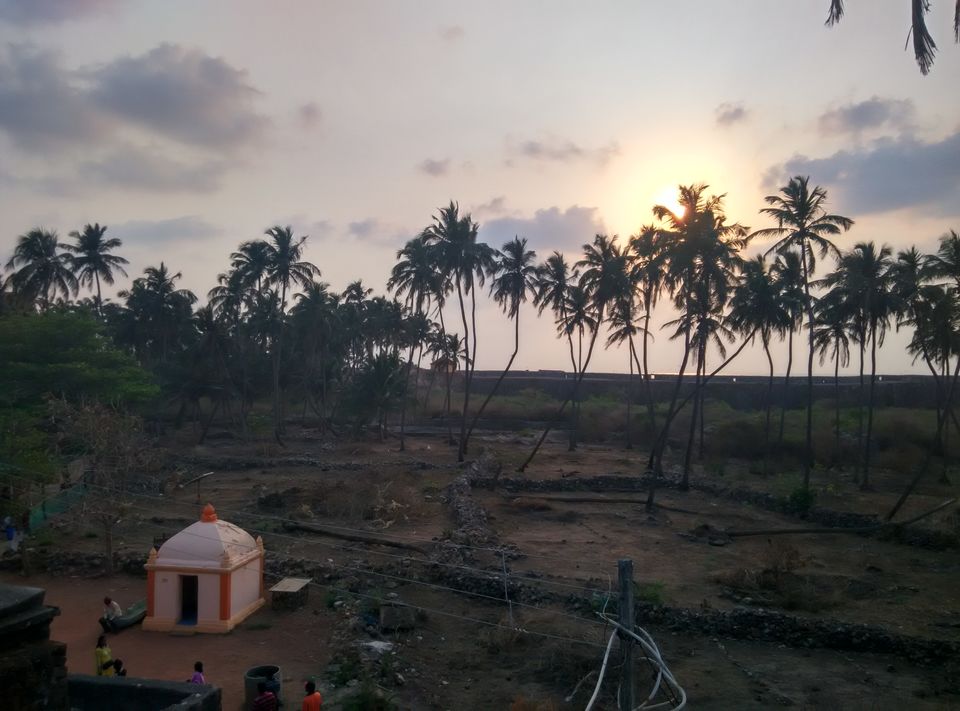 The last day of the trip – the return journey. We started at 9 O’clock in the morning and planned to travel through Kolhapur – Satara –Pune – Mumbai Highway. There was a Ponda ghat and Radhanagri ghat – again a wonderful merry-go-round type of roads. We had a break at Kolhapur. We took darshan at Mahalaxmi Temple, bought some typical kolhapuri chappal and started our journey again. Once more on the roads and as usual I was lost in it. The road has its own life. When you are on the road trip, the unending roads become your friend and play with you, share stories with you. It gives time for you to go deep inside your mind. It provides some kind of meditation. The narrow or the wide, the bumpy or the smooth, whatever road it is; it is always pleasant to traverse by. It is some kind of intangible feeling that we could feel. Roads are not only for about commuting from one place to the other; it is a change that goes on, deep and permanent, in the ideas of living. The perfect road journey is never finished; the goal is always just to cross the next river bridge, round the shoulder of the next mountain. There is always one more track to follow, one more mirage to explore. “What you’ll get in return is an experience that money can’t buy.” 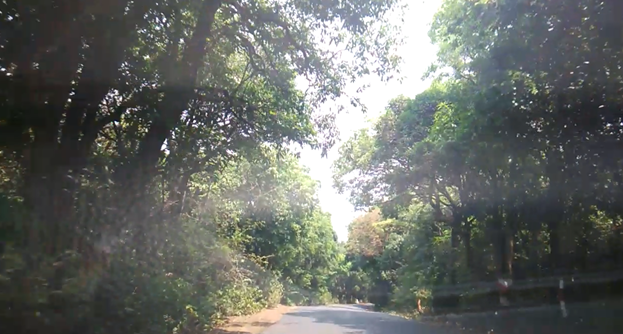