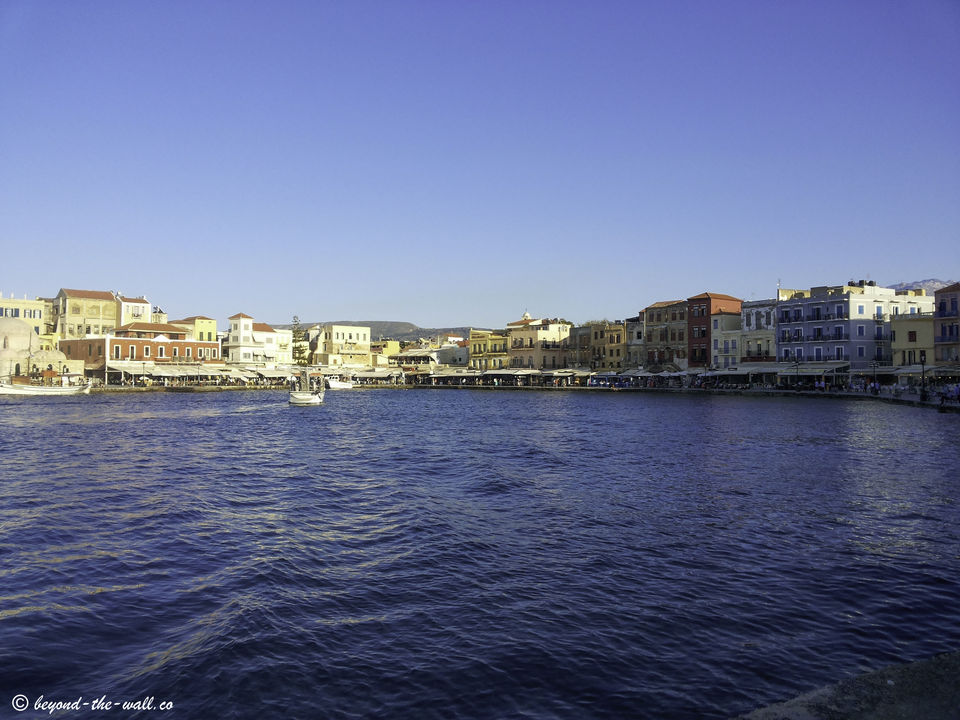 There’s something about the blues and whites of Greece that pulls travellers like moth to a flame. The historical sites, the fresh seafood, the filling Greek gyros, the iced coffee, the mind-blowing sunsets, and the vast sea hugging the whole country are some of the many reasons to visit this underrated country. For us, Greece remains one of our favourite countries so far and may continue to remain so. Thanks to the economic crisis, popularity of songs and movies shot in famed 'Santorini', and the reputation of Mykonos as the world's finest party destination, the popular islands of Greece have become a bit too touristy and overcrowded. Though unfortunate, this leaves many other parts of the country off the limits of tour groups, keeping them sane and raw for the curious traveler to find peace in.

At the southernmost tip of Greece lies the largest and the most populous island of Greece, Crete. Pronounced as /Kreetee/, this island marks the border of European land making Crete a bridge between Europe and Africa. Undoubtedly, Crete houses varying cultures and cuisines that shows off its glorious past and its strategic location on the map. There aren’t any blue domes in Crete and the art, music, and food is remarkably different from the rest of the country. It would be incorrect to call Crete ‘offbeat’ as many history lovers, beach enthusiasts, food connoisseurs, hikers, and cyclists make it to the island. The good news though is that Crete continues to remain non commercial and ‘touristy’ making it a perfect spot for those looking at exploring Greece differently.

In this article, we give you a super short itinerary to begin to know this unusual Greek island and befriend it to come back later for a longer affair.

Heraklion(Iraklion) is a port city and the capital of the island. You can reach the island of Crete either by a ferry or fly into the Heraklion International Airport (Nikos Kazantzaki). The ferries operate from Athens and other islands of Greece as well. A high speed ferry from Santorini is affordable and takes about 2 hours to reach Crete.

- You may not be a history enthusiast or someone who usually enjoys visiting ancient sites, Knossos is unmissable either way. The oldest city in Europe, Knossos was the centre of the Minoan civilization that flourished around 4000 years ago! Thanks to archaeologist Sir Arthur (who discovered the site), the ruins were redeveloped partially to express the grandeur that existed in the ancient world. The site is located 5 km from Heraklion; make sure you check the entry and exit time before you visit the site to account for the changes made by the authorities in different months. 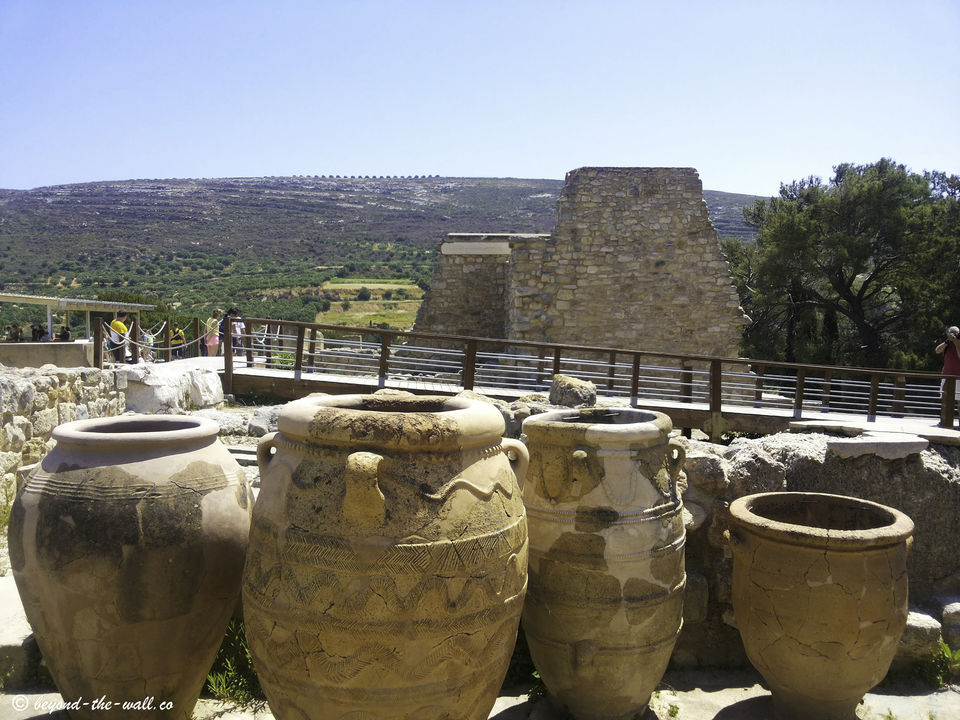 - As you walk around the town of Heraklion, visit the Koules Fortress. The fortress is a living sign of the Venetian rule that lasted for more than four centuries on the island before Ottomans came in (and rules for another 200 years!). An easy walk at the promenade leads to the fort.

- You can also choose to visit the Crete aquarium, Cretaquarium, that is considered one of the largest in Europe and displays unique sea life of the Mediterranean Sea. Besides, do not forget to explore the markets in Heraklion and to buy the Cretan Olive Oil for your kitchen.

- Indulge in fresh food like never before - dakos (Cretan rusk bread with toppings), pickled vegetables, cheese, Greek yogurt, tzatziki (yum!), seafood of all kinds and everything loaded with a ton of fresh olive oil. Sip on Raki as you gulp down the delicious foods. 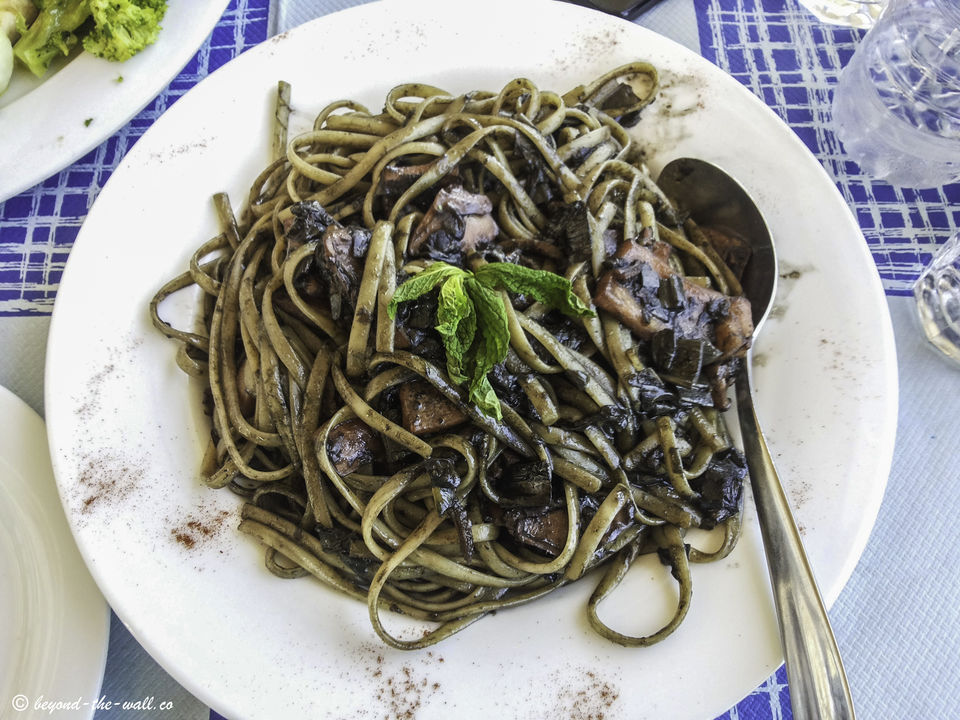 Start the next day with a drive to the town of Chania. If you have rented a car (highly recommended to rent one in Crete), a drive from Heraklion to Chania will take about two and a half hours. Alternatively, you can catch a bus from Heraklion that operates quite frequently.

- Chania is all about old narrow vivid streets, lazy walks at the Venetian harbor, nightlife, and a lot more walking in and around the old town. Based on your interest, budget, and the number of hours that you would like to spare pick a walking tour in Chania. Walking tours are a great way to see a place through a local’s lens. Pick a walking tour of the old town area, a food tour, bar hopping, beach hopping, wine tasting and many more tours available in plenty.

Dining in the ancient lanes of Chania 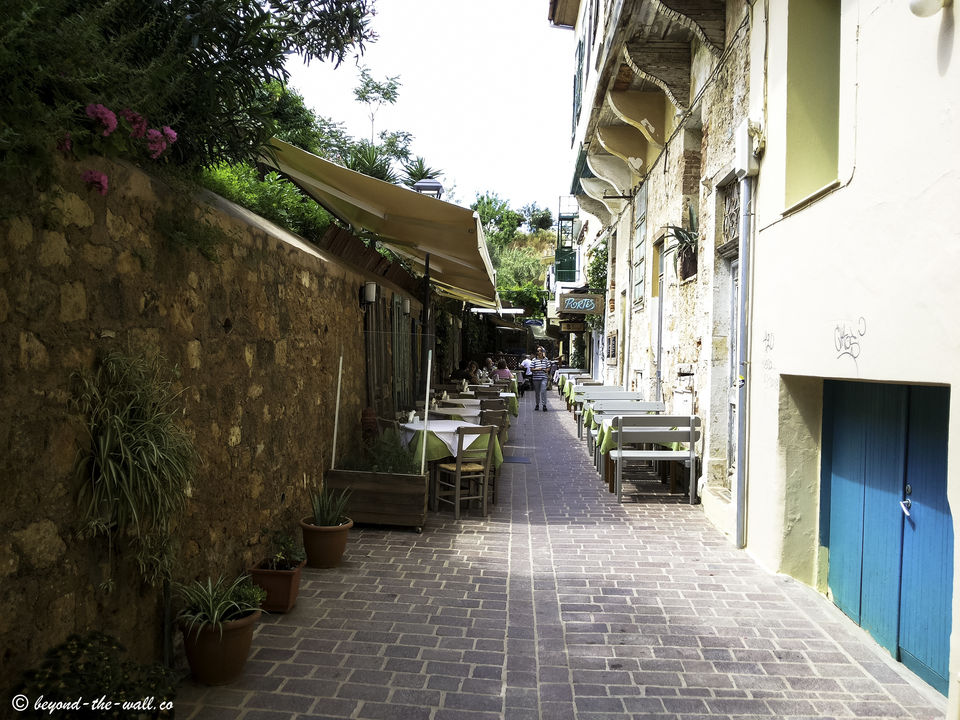 - The harbour and lighthouse at Chania is where all the buzz is and it’s for a reason that this spot is insanely famous among locals and the tourists. The harbor sparkles in different shades throughout the day ending with a stunning sunset only to lighten up even more with the night life. Best to avoid the over priced touristy restaurants located right at the harbor; instead choose to eat in the old town area where the locals go. We recommend Portes for a great meal and ancient’y’ ambience. 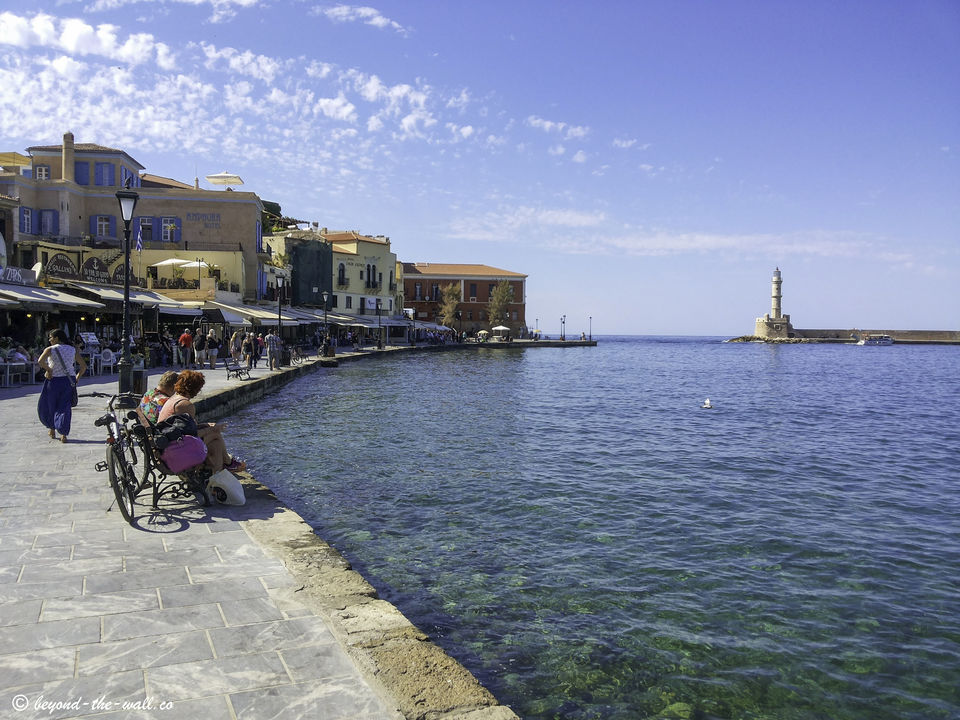 It’s day 3 and Crete has just begin to open up. Save the best for the last and visit Elafonisi, a stunning pink beach that lists on the top ten beaches of the world! Elafonisi beach is located ninety minutes away from Chania and it makes for a mind blowing drive from the town to the beach. It’s highly recommended that you switch off google maps when driving back and deliberately get lost in the villages from Elafonisi to Chania - the views, the village life, and the tiny coffee stops are missed when taking the google recommended ‘shortest’ route. The beach itself is pinkish and the sand is softer than cotton. A wide and shallow lagoon spreads for a considerable distance before the waves hit making the beach perfect for long walks into the water. The beach does receive a lot of crowd (it’s justified!) through the day and gets a bit windy; make sure you go prepared with beach accessories to make the best of the day.

The benefit of switching off Google Maps 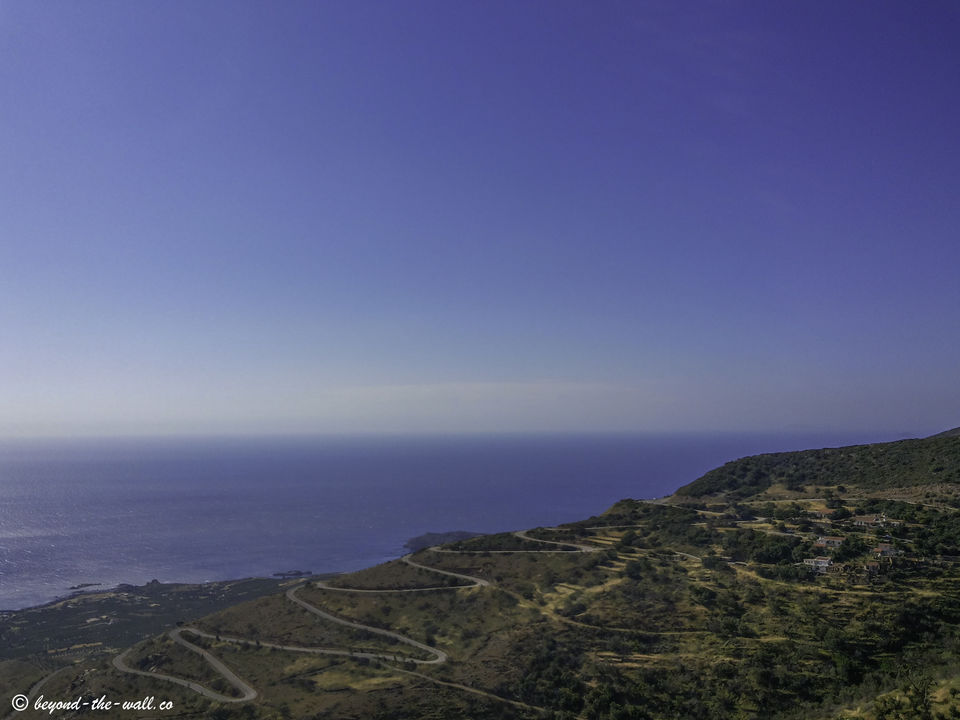 It’s quite likely that you may end up spending most of your day at Elafonisi; if you don’t, drive to the spectacular monastery of Chrisoskalitissa located on a rock 5 kms off Elafonisi. The monastery itself may not appeal to many, the views of the open Libyan Sea make for a great visit. The rock that holds the monastery is perched at 35 metres making it a natural elevation to watch the thick blue waters from. The location also makes for a great sunset view point. What better way to end the Cretan journey!

The picture does no justice to the beauty that this beach is. 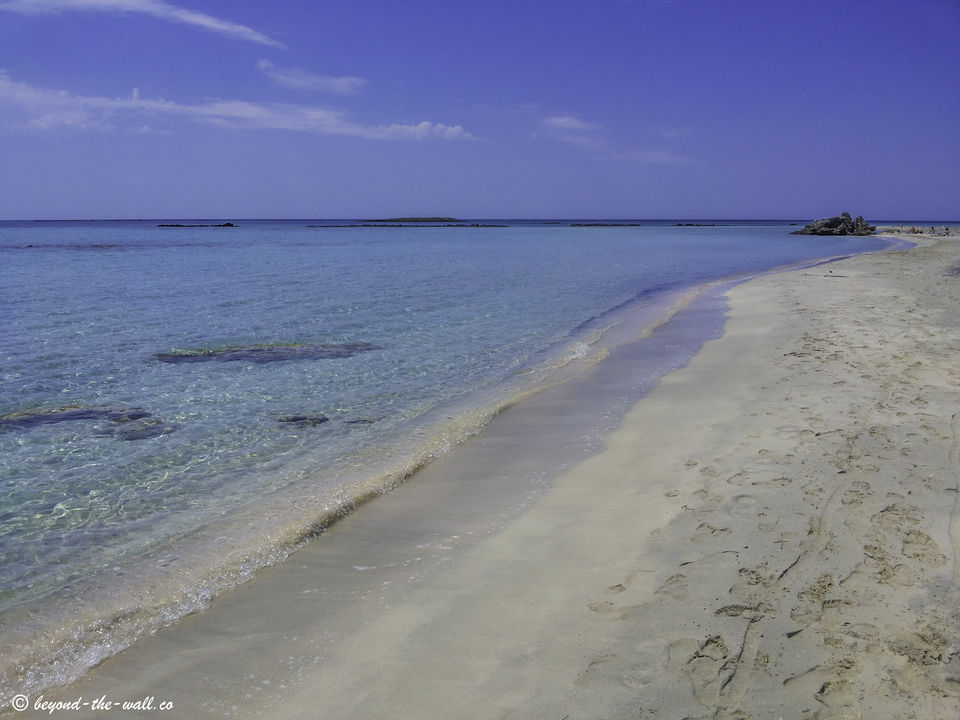 Crete is an excellent destination for long-term and slow travels. If you happen to stay for longer, consider visiting the fishing villages of the southern Crete and hiking the stellar Samaria Gorge. The latter is one of the finest hiking trails in Europe.

Other than Elafonisi, Crete has many other stunning beaches. You can skip the famous islands like Santorini and Mykonos for Crete and have a perfect beach holiday nevertheless.

Crete is a pretty large island. Going from one place to another takes time and it’s best to have a rented car for added advantage.

If you are planning a long holiday to Greece, here is our itinerary for a two week holiday in the stunning country.