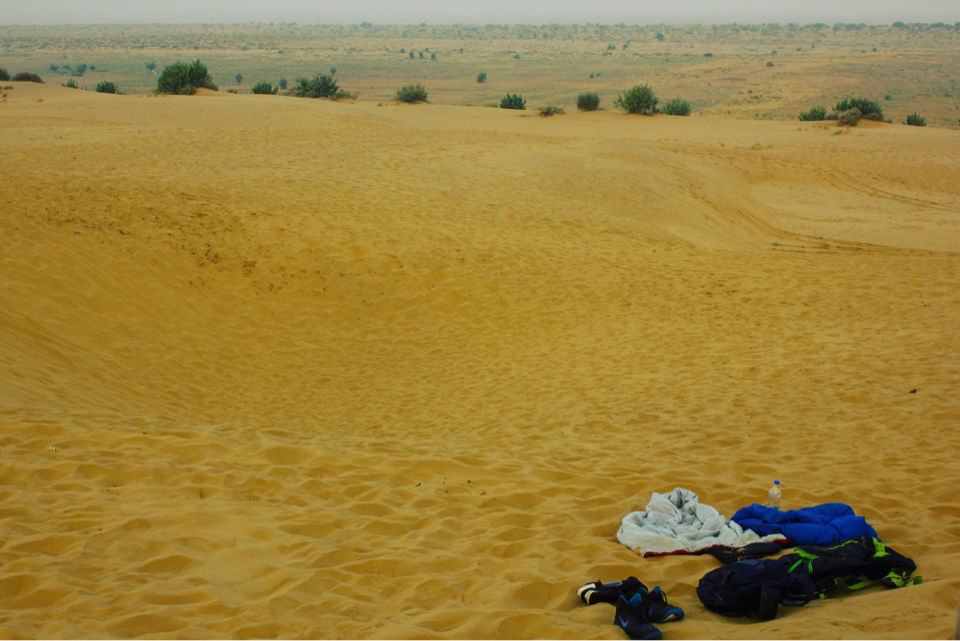 I believe that all of us have a story to tell, that the experiences we have and the lives we live all translate into this great big story. I randomly came across this quote and it really stuck, it goes “Life is a story. Make yours a bestseller.”

And I think the singular most profound way of making my story worthwhile is through travelling. To each his own of course but I would take a spontaneous, (albeit sometimes stupid) crazy adventure in a place that I don’t call home over a house party or night out any day of the week.

Its pretty easy to have these dreams of seeing the world when you’re a somewhat naïve college kid. You don’t have bills to pay yet, no worries about that monthly cheque coming in, attendance issues aren’t half the trouble as compared to the dreaded phone call with your boss. What sucks is when you have to be an adult and continue pushing the dream.

Such was the case with us (my best friend Sud and I). We’d gotten done with our Undergrad the very same summer, around came September and it was time for us to adult. A month in and we knew what we were looking at for the next 40 years of our lives and yes, I know it might have been too soon for us to say that but boy did we need a break.

Anybody who’s lived in Delhi for a substantial amount of time has been to some part of Rajasthan at least once (if you haven’t and you’re reading this, its about time you do!). Rajasthan is close, convenient and so rich in its history and culture that it completely enthralls you and since we knew we weren’t going to get a lot of time off from work it seemed like the perfect answer. Having already been to Jaipur, Jodhpur and the works the new places we ventured into were Bikaner and the star of our trip, Jaisalmer.

We started off at the Gurgaon railway station waiting for our 9pm Bikaner train, getting us there the next morning. Considering the budget we were on, a sleeper ticket was what we were in for but nobody was complaining, having taken all our trips previously on a college kid’s pocket money this was pretty commonplace.

Getting to the Bikaner station was a pretty pleasant start to the day in itself because it was one hell of a good looking railway station, I know that sentence in itself might seem like an oxymoron but it was clean and had more than just polls to look at. Since we didn’t have the luxury of time, we decided to freshen up at the station itself and head to the city, the first stop was Junagarh Fort. The fort in all its glory was fantastic, with most of the typical Rajasthani architecture you’d expect to find and it was pretty well maintained too.

We decided not to stay at Bikaner for the night and instead decided to try some of the famous Bikaner street food and head to our next destination. You’d expect that street food would, well be simple to find but that was one hell of a wild goose chase. Unable to find any of the famous places we'd come across on Google, we decided to cut our losses and take a sleeper bus to Jaisalmer. We were really psyched about taking a sleeper bus, it was our first time in one and the thought of a legitimate bed on a bus sounds great, right?

Reaching Jaisalmer took a little longer than we estimated it would but all of that was made up simply by the fact that this little shop right next to the bus stand had THE most amazing dal-baatichoorma I have ever eaten, the perfect amount of melt-in your mouth and crunchiness. After having eaten ourselves into a food coma of sorts we decided to find a place to crash since it was too late in the day to do much else, but to our surprise the city was jam-packed. Either rooms weren’t available at all and if by a fluke of luck they were, the cost of those sub-standard rooms would burn a hole in our pockets.

We found an auto-wala that turned out to be one of the nicest people I have ever met and you’ll see why. We asked him to take us around the city helping us find a place to stay while we frantically googled our options and made calls hoping someone would give us shelter… Our last resort was going to be to spend a couple of hours at the bus stop and wait till the city was awake to do the rest.

Rajasthani hospitality is pretty well renowned, as most of us must know. They take the whole “PadharomaareDesh” seriously and I can stand testament to this. Our auto guy- Bhupender Singh upon hearing our last resort seemed very offended at the thought of guests in his city having to stay at the bus stop, he welcomed us into his house saying we should spend the night at his house. To be honest, we were a little taken aback by the proposition and of course given the age that we live in, my safety was of utmost concern as well.

But having decided to take the leap of faith, we said yes. He drove us home and believe me when I say this that even the best 5-star can’t give one such warm heart-felt hospitality. It was around midnight when we landed up at his house. His mom brought us tea and home made snacks to munch on even though we insisted otherwise and both of us, me and my friend, fell asleep on charpais in that little room with a warm fuzzy feeling in us.

The next morning we set out to have a look at the Jaisalmer fort, the fort is splendid but we can’t deny what a turn off a misbehaving and loud crowd can be. The next stop for us was Sam Dunes, which is about 50kms away from the main city and the main attraction of Jaisalmer in a way. Going there is going to a whole new landscape, miles and miles of sand and in our case people.

Just as was with the fort, having your own space on the dunes at sunset was kind of an impossible task. One would think walking away from the crowd would do the trick since it is in fact a vast expanse but people have a way of getting everywhere and the worst bit, we do our absolute best to leave traces behind. Little packets of chips, beer bottles, the works all left behind in a desert that’s a 100 years older than you are and will I’m sure take more than a 100 to get rid of all the trash.

As disappointing as it may have been, our next move was to find a tent to spend the night in. We had been speaking to someone on our way to Sam Dunes who promised us a place to stay at a reasonable rate considering it was peak season time. Little did we know that the place was in fact a sad little concrete room in what can be only described as a well established campsite full of Swiss tents. The kind of place where a family would take their kids, if I’m not wrong it even had a pool.

The owner of the campsite looked at us and our rucksacks and could tell we don’t belong. Definitely not among the families enjoying the Rajasthani folk dance (which was pretty cool btw, had ladies with multiple pots on their heads and everything) ,the kids running around and the grandmom’s sipping on their evening tea. He suggested we camp out in the desert, a common practice among the young foreigners, and that he could provide mattresses for us to sleep and we could spend the night in the middle of the desert. We jumped at the idea, a totally untouched sunrise in the dunes, who wouldn’t?!

We realized we didn’t need the mattress since we always have our sleeping bags on us and the camp guy took us on a midnight safari and dropped us off in the dunes. As soon as the jeep was out of sight, there was stillness in the air, complete silence. The kind of silence you forget exists when you live in a city for too long. It was the most beautiful starry night. We finally managed to find the solitude we’d been looking for and it was well worth the wait.

To get the mood going, since we didn’t want to immediately fall asleep, I mean what would have been the point then, we put some music on our phones. Everything around us was so quite that it felt like our little phone speakers could be enough to start a dance party!

We lay in our sleeping bags on the sand for hours, talking intermittently but mainly just looking up all the stars. That’s another thing we forget when we’re too preoccupied with all our daily hustle bustle, how wonderfully enchanting the sky can be, not to say that if we did look up some day while in the city we’d see a whole lot thanks to the layer of smog but you get the idea.

And as the title suggests, we saw our very first shooting star, the first in our lives. And in that moment all I could wish for looking at it, was that my life is always filled with moments exactly like this one. Spontaneous, slightly crazy, very adventurous.

Next morning, our slumber was interrupted by a safari camel (out of all the things to awake to!) right on top of my head. It couldn’t not have gotten more Rajasthan than that.

The jeep from the campsite picked us up and did our morning rituals at the camp and it was time to head back home.

We hitched a ride from the Dunes back to the city and it was the most perfect ending to the trip. A 4 hour ride and me and Sud barely spoke 3 or 4 times, there wasn’t anything wrong but we knew that nothing we could say could sum up how we felt then.

The ride back was just wind in our hair, music in our ears and sand for miles together.

The Pushkar mela is an age old tradition and to be able to be a part of such a grand tradition in such a manner is an adventure of a whole other kind. I don’t think there can ever be an opportunity to experience Rajasthani traditions in such a delightful manner, the mela doesn’t limit itself to a certain kind of traveller, its meant for everybody equally. The hot air balloon ride is of course just the cherry on the top.

Sam Sand dunes, in all its over crowded glory 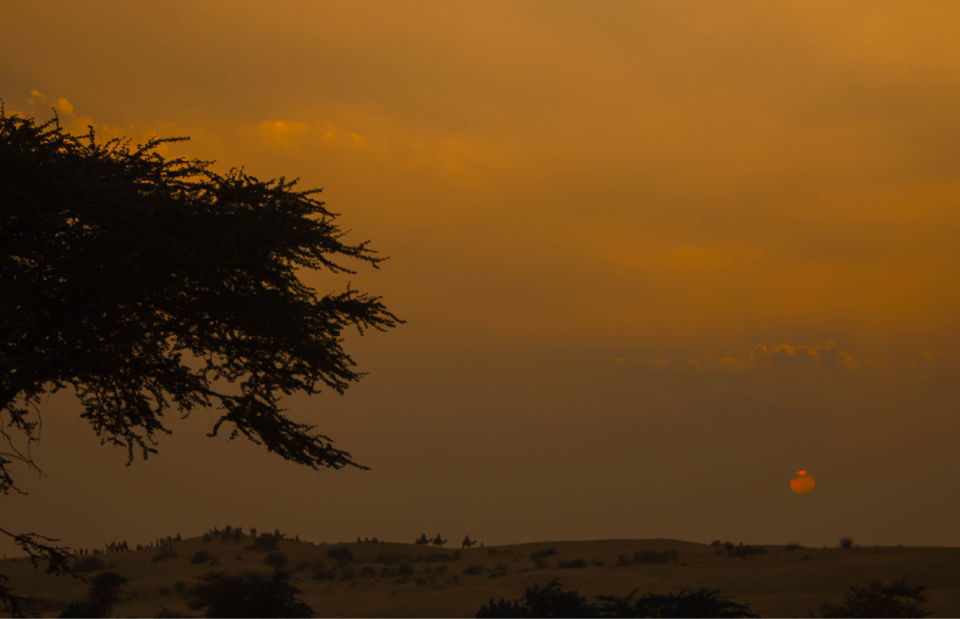 Waking up to this view! 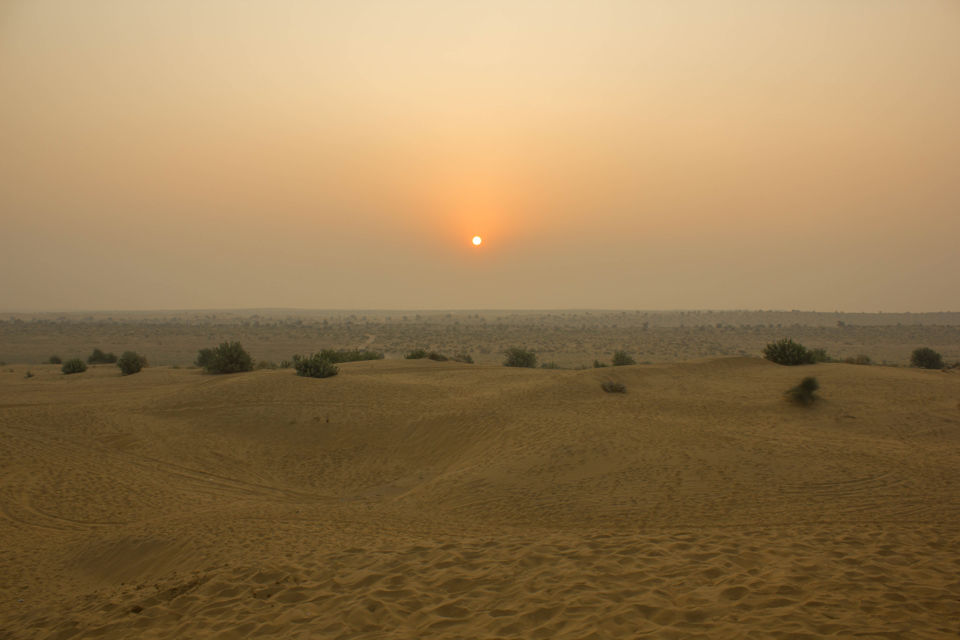 Our little made up campsite in the middle of nowhere 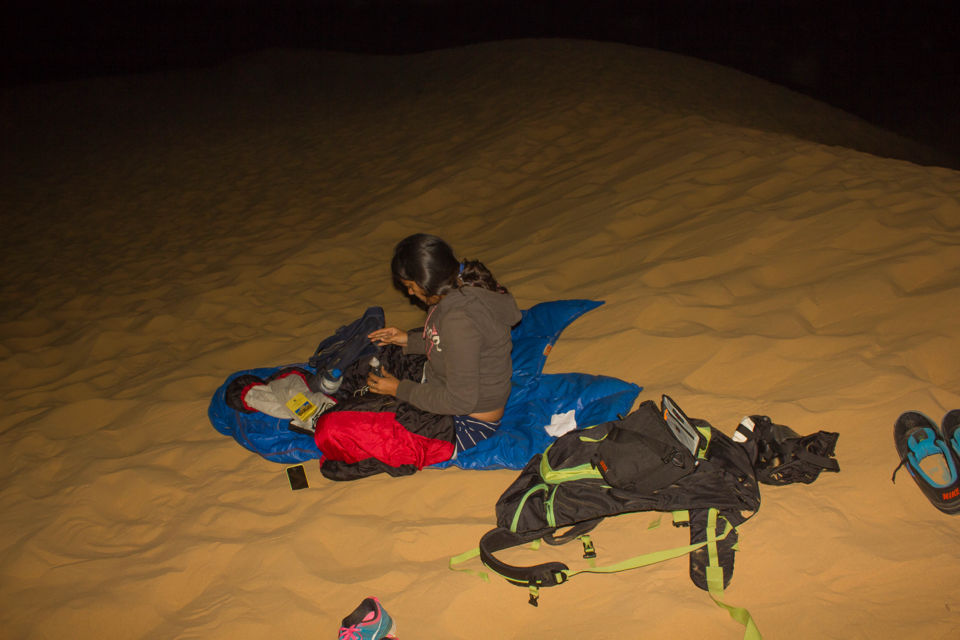