The best way to treat yourself generously to the country of Alps is by train (and their mountain transport) because Switzerland is all about spectacular journeys and not only a means to travel from point a to point b. And therefore it would be unjust to not talk about Switzerland’s integrated and high quality public transportation system after having spent a fortnight there. We travelled the local way because there was no better way to do it. We hopped from one train to another like the higher proportion of Swiss population, who rely on the dense railway network for shorter and longer distances. Armed with Swiss Pass, we only had to run and catch the next train; without having to wait in queue to buy point to point tickets and struggle to add up the cents and francs.

Like every other tourist we opted for the scenic rail routes. On our list were the internationally popular Glacier Express (travels between Zermatt and St Moritz), Golden Pass Route (between Lucerne and Montreux), Jungfraubahn that takes you to areas in the Jungfrau region, Gornergratbahn (takes you to the magnificent Matterhorn).

Our first scenic train journey started from Lucerne on the Golden Pass Route and ended in Interlaken in the region of Bernese Oberland. Gently did Switzerland unveil its beauty upon us. Snow-topped mountains made occasional appearances while earthy chalets, misty waterfalls and green pastures reigned over the region of Central Switzerland. You know you’re reaching Interlaken when you glide pass the turquois waters of Lake Breinz.

The most talked about Glacier Express

The Glacier Express is on every traveler's must do list. It's a slowest express train that takes about eight hours to reach from Zermatt to St. Moritz (or the other way round). The route is a breath taking one provided one makes the travel on a clear day. Riding the train on a cloudy day means that all that was worth seeing is hiding behind those clouds and you have only enjoyed the luxury and the comfort of the Glacier Express train. As the weather is unpredictable in Switzerland, it's best to check the weather before making the bookings. But it's important that one should book the tickets in advance during the peak season. If you don't wish to spend the money on the train (tickets cost Sfr 149 for 2nd class plus Sfr 33 for reservation, Swiss Pass holders don't need to pay for the ticket but the reservation charges), you can take the same route and travel on their local trains. There is no direct train from St. Moritz to Zermatt, therefore you would have to make several changes.

Read my experience of The Glacier Express here.

You can book your tickets online from their official website or you can also buy the tickets from the railway station.

With Swiss Pass (Swiss Travel Pass), one can travel unlimited within the country of Switzerland on almost every train, bus, boat and there is 50% discount on mountain transportation (cable car, cogwheel, funicular, gondola). The pass also entitles the holder free entry to some 400 museums and free travel on most panoramic routes. For example, the Swiss Travel Pass holder travels for free in the Glacier Express, one of the most popular train journeys in Switzerland (the route between Zermatt and St Moritz). Though reservation charges of Sfr 33 apply.

Swiss Pass is available for 3, 4, 8 and 15 days. We bought our 15 days pass online from raileurope.co.in and paid in INR. The passes were delivered to us by mail and we got print outs of it. The ticket checker scans the barcode that is printed on the paper and sometimes asks for the passports. Be sure to carry multiple copies of the pass.

Apart from Swiss Pass, many other passes are available to suit the requirements of the traveller like Swiss Flexi Pass (unlimited travel for certain days during one month), Swiss Half Fare Card (the holder pays half the fare in trains and there is some discount on local bus, trams and mountain transport), Regional Passes (valid only in that particular region, they are available from the train station in that region), Junior Travelcard (children aged between 6 and 16 years travel for free and is valid for one year).

The passes are available online and at train stations in Switzerland.

When selecting the pass, you would be required to select the class. Second class coaches are more crowded than the first class. But you’d find many fellow travellers and locals to start a conversation with (we found first class coaches to be awkwardly silent and boring).

Before starting out on any journey on train, we would unfailingly check the timetable the day before. Their ever so accurate online timetable helped us plan our journeys well and never once did we encounter any delay.

We first experienced the cogwheel ride when we visited Mount Pilatus, one of the many nearby mountains from Lucerne. To reach Pilatus Kulm, we bought tickets for the whole ‘Golden Round Trip’ at one place that made the process of getting the tickets and traveling easier. The cruise from Lake Luzern took us to Alpnachstad; from there we boarded the cogwheel train to reach Mount Pilatus. We came down by cable car to Kreins and by bus we reached Lucerne. Speaking of cogwheel, it is a kind of mountain railway meant to climb steep slope. Pilatus Bahn takes you past lush forest greenery into snow-clad mountains as it makes an ascent during half an hour-long nearly perpendicular journey that was little short of an adventure sport for me. The Bahn claims to ride its passengers at an inclination of 48 percent, making it the steepest cogwheel in the world. This is the technology we’re talking about of the year 1889 when it first opened and was steam operated! In India, one could ride the cogwheel train in Tamil Nadu on Nilgiri Mountain Railway, between Mettupalayama and Coonoor. It’s qualifies to be the UNESCO world heritage site. 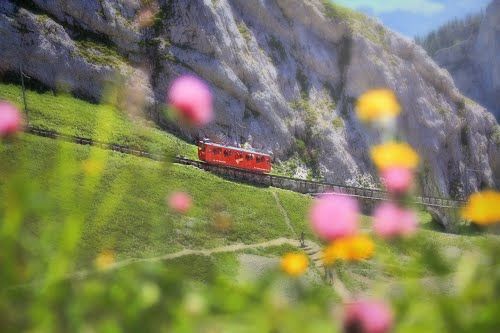 And it is at Mount Titlis that we got to experience the best of cable car rides and enjoyed the breathtaking views for forty-five minutes. The highlight of the journey is the world’s first revolving cable car, Rotair that rotates 360 degree during the five-minute trip to the summit. As we whirled above the Titlis Glacier, we got panoramic views of rising icy peaks, deep crevasses and green pastures of Engelberg. Unlike other cable cars, where few lucky ones get the views, the Rotair treats one and all with stunning scenery. On the top, we rode on the Ice Flyer chairlift that took us down to the Glacier Park where there were many snow activities to try like sledging, snow tubing for free. Adjacent to the chairlift, we did the more adventurous cliff walk on the bridge that was the Europe’s highest suspension bridge when opened in 2012. 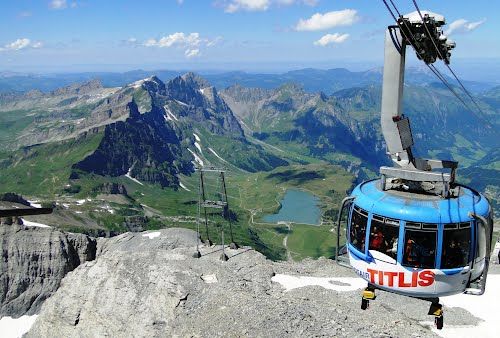 Jungfraujoch is a considerable feat of engineering. It’s a once in a lifetime experience that every traveler must experience. Passing through the seven kilometers long tunnel that took 3000 men 16 years to drill it, fills one’s heart with reverence for those who went through the unimaginable hardships. And with great courage, skill and strength, they made Jungfraujoch the highest train station in Europe (it opened in 1916) that still draws millions of tourists every year.While coming back, we lingered at Kleine Scheidegg for a while before getting on to the train that would take us to Grindewald (we did the round trip). The station has restaurants where you can sit and soak in the sun and some dazzling views of Eiger, Monch and Jungfrau. Watching the red train snake on the snow-covered mountain is a treat in itself. From Interlaken, one can choose either of the two routes, one that goes via Lauterbrunnen and other takes you via Grindewald. Trains from Grindewald and Lauterbrunnen stop at Klein Scheidegg, from where the last stage of the journey begins and takes you to Jungfraujoch. In between, the train makes two stops at Eismeer and Eigerwand where panoramic windows on the stations offer incredible views. Many tourists also base themselves at Interlaken for making a day visit to Jungfraujoch. While we chose to stay at Lauterbrunnen, a small village nestled in the deep valley and surrounded by rising rocky cliffs and some seventy-two waterfalls.

No other mountain stands apart from the rest like the way Matterhorn does. One of the most majestic mountains, Matterhorn lies at the foot of Zermatt, a car free village in the canton of Valais. We traveled on Gornergrat Bahn from Zermatt. It was a clear day and we couldn’t stop photographing and gazing at this striking mountain all throughout our trip. Up on the mountain you’ll get sweeping views of the surrounding Alps with Matterhorn standing proud and tall among them. Cogwheel train also known as rack railway takes you to Gornergrat railway station in about thirty minutes. It is said that it is best to take the trip during sunrise and sunset.