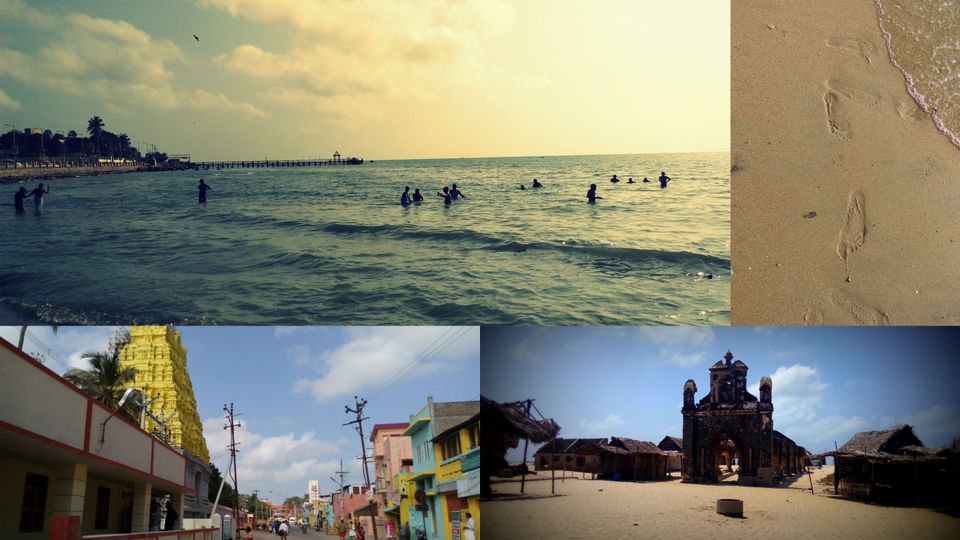 If you have liked any travel website, you would have read about the best rail trips in India. One such scenic and amazing train journey is over the Pamban Bridge which is supposedly the bridge built by Nal-Neel. I had heard about this exciting journey from my mother so many times that I was very keen to travel from Madurai to Rameshwaram by train.

Since I was travelling alone, instead of overnight stays I opted to travel in the nights and discover by the day. From Madurai there are two trains to rameshwaram, one leaves at 4.45am and one departs by 2.20am. I reserved a seat in the 2.20am CAPE-RMM express for some Rs.270. The train was on time and i started my journey with a lot of excitement. I was finally going to experience a ride over Pamban bridge. If you have spent some 4hrs on the railway platform gallantly fighting mosquitoes, you would know that the berth of a train looks extremely welcoming. The train left Madurai and the next thing I remember is Rameshwaram station. I had to pinch myself a few times. For a moment I thought Ravana’s “pushpak vimaan” might have dropped me in Rameshwaram. Then the watch told me that I had completed my 3 hours journey and peacefully slept throughout thus missing the life defining journey over the Pamban bridge.

This made things a little difficult. If it had been some other person I might slapped, kicked and bitten them but how to mete out the same treatment to oneself in a public place without provoking the public to generously book a permanent place in a loony bin. So there was nothing I could do other than goggle like a perfect jack ass.

After de-boarding the train, it was a short walk to the town. It’s not even a town actually. It’s a bunch of houses and lodges clumped together. The whole town ends in a 2km radius. So I started asking for a place to stay and every where they refused to give room to a single person. They don’t discriminate on the basis of sex. Both male and female solo travellers are refused rooms. This made things a bit difficult. I needed to sleep some more and freshen up before heading to the temple. Again an Autowallah came to my rescue. For 20 bucks he took me to Sumathi lodge and convinced the owner to give me a room. It cost me Rs.600. Since he was the only person who agreed I couldn’t bargain much.

The room was nice with TV and attached bath. Hit the sack immediately and after an hour got ready to visit the temple. In Ramanathswamy temple, they don’t permit mobile phones at all, so the phones and cameras and chappals have to be deposited in the locker room or the shops surrounding the temple. They charge Rs.10 for each phone. When I argued the shop keeper informed me that such a costly phone is a big responsibility for which the amount is very less.

Ideally it is suggested that a person should take a dip in the Agneetheertham (the sea near the temple), then bathe in the water of the 22 holy wells, change to fresh clothes and then go to visit Ramanathswamy. While not a hydrophobic, I am quite terrified of the concept of swimming in the sea where the water is endless neither was I too keen on dipping myself in wells. So I went for the Ramanathswamy darshanam directly. It took me some half an hour only and the moment I reached the front of the queue the curtain was pulled. This resulted in some heated discussions with the bouncers and pandits of the temple who where trying to chuck me out. Some more pilgrims objected to leaving without a proper darshanam. Anyway finally when the curtains were pulled aside, the view was really wonderful. It’s something which I can still see with my eyes open.

Pilgrims usually carry Ganga Jal to offer to Lord Shiva. All the water brought by the pilgrims is collected in a bucket and poured over Lord Shiva. The catch is one needs to pay 100 bucks to get their water into the bucket. In case a pilgrim didn’t get Ganga Jal, he/she can buy it from the temple premises. The authenticity of the Ganga Jal is a question here because while waiting in the queue I found one shopkeeper happily drinking from the Ganga Jal can. It is usually believed that Ganga Jal is drunk when a person is on his/her way to kick the important bucket.

After the darshan, I wandered around for sometime and was mobbed by pilgrims who were dripping from every part of their body. Followed the arrows and reached the wells for holy bath. The scene that unfolded before me was not very inspiring. Two men were standing on top of the well and drawing out water which was dumped on the head of the people standing below. I paid my whole hearted respect to all the wells and quietly pushed off from there.

By 9am I finished my Rameshwaram Darshan. From the temple, went to the sea beach, Agneeteertham. Lovely breeze but extremely hot. It was very crowded so after a few selfie sessions, I went in search for the Bus Station. There is a regualar bus service from the Temple to the Bus stop. It costs Rs.5 for a one way journey. Since my next stop was Kanyakumari, I wanted to find out about the bus service. Only SETC buses run from Rameshwaram to any other place. There is only one bus from Rameshwaram directly to Kanyakumari. Leaves at 7.30 pm and takes some 8hrs.

With the whole hot day ahead of me, I decided to visit Dhanushkodi, the famous “ghost town”. There was city bus service to Dhanushkodi every half hour from the Temple. The journey is very pleasant but the bus dropped us at the entrance of Dhanushkodi. On either side was the sea. The Indian ocean to our right, beautiful and sparkling blue against the white sand on the beach. To the left was the Bay of Bengal, slightly greenish blue and bright yellow sand on the beach. The explorer in me was all pumped up and I started walking under the burning sun towards the end point. A signboard said it was 0.5 kms ahead. After walking for some half an hour, I felt some horrible miscalculation of the distance which was confirmed once I reached the Ghost town which was 5kms from the starting point. Seen a decimal where it was not present.

On the verge of collapsing, I saw my fellow tourists arriving in something called a maxicab. Embarrassing!! In no condition to walk back, I bargained with one of the Maxicab fellow to take me back. For Rs.100, I was clubbed with a tour group. On my way back, visited some more places and finally reached Rameshwaram.

I had missed breakfast so I was starving and strongly felt the desire to eat something other than Dosa or Idli. On my way back to the Lodge I found one small restaurant, Chola’s. It was crowded but the service was extremely fast. Ordered mutton biryani and it was one of the best I have tasted in a long time. The mutton melted in my mouth and the quantity was really good. I also visited Dr.APJ Kalam’s house. His medals, his achievements and his wisdom is really inspiring.

Even though a small place, Rameshwaram is worth visiting. The sunscreen lotions are useless here and no one understands a word you say but people are eager to help. Another interesting thing in Rameshwaram was none of the local males wear pants, only Lungis.

As my SETC bus arrived to take me onward, I didn’t know whether to laugh or cry. The ultra deluxe bus seemed to be held together by duct tapes. As the bus started moving my seat started vibrating like a massage chair. And then as I looked forward to my next destination I realised we were about to cross the Pamban bridge. The ride was wonderful… Even though it was dark, it was easy to make out the railway bridge and the endless sea beyond it.

This trip was originally published on 'Srijani Banerjee'.