Visit Lucerne And Fall In Love

There is something about Lucerne, one of Switzerland's most popular cities but the least city-like of them all. The sun shines brighter, the grass is greener, the spotless sky is the most beautiful shade of blue and even the cars on the streets look like they've emerged from a modern painting. It's like being in a perpetual state of love, except that this love is with a place and not a person. Yet, the city has so much character of its own; it radiates a certain warmth, possesses a unique charm and speaks to you by virtue of its many bridges, lakes, chapels and sculptures. Lucerne is almost human, a reclusive one with her emotions carefully tucked away into a corner which she expresses every now and then in the form of loving gestures like the cool winds and the sanguine sunshine.

Iconic sights in Lucerne may have been ravaged by disastrous fires and carved rocks may be emblematic of the pain caused by loss, yet, after a short ride up the sharp mountains, when the clouds part like a curtain and allow you to see the glittering turquoise waters surrounded by verdant pastures and toy-like settlements, all the melancholy vanishes into thin air. If nature is not really your cup of tea (How is that even possible?), the city also has a little something for art and music enthusiasts with museums adorning almost every corner and concerts springing up just the way new upbeat cafes come into existence every single day. Lucerne is thronged by tourists from across the globe some of whom are solely interested in enjoying the delights of this old-world beauty while some visit just in order to hike up to the Mountains Titlis, Pilatus and Rigi. Several people, like the aforementioned music aficionados, might also know of it owing to the fact that it is home to one of the most vintage music festivals in the world- the Lucerne Festival.

'Luzern', which is the German variation of this Swiss City of Lights, is supposedly the prettiest place in Central Switzerland and rightly so. With its perfectly symmetrical cottage-like houses that come in varied pastel shades and windows replete with bird baths and vibrant blooms, the historical town is composed of dreams. Waking up to astounding views of the Alps, listening to engrossing anecdotes about the Swiss hero Wilhelm Tell and walking over wooden bridges with the pristine water gurgling below, you will invariably realize that the modesty of Lucerne, despite possessing such gems, shines above everything else. Take a trip to this marvel at least once in your lifetime; it will gladly welcome you with its arms wide open.

Getting There and Around:

Frequent Intercity/Interregio trains connect Lucerne to the major cities of Zurich, Geneva and Bern with Zurich being the closest. Do check the SBB website (www.sbb.ch/en/home.html) for train timetables and reservations. Holding a Swiss Pass, which is strongly recommended, will cover your travel costs and you can buy one that suits your needs from www.swiss-pass.ch. These passes need to be validated by a railway official before you board the train to your destination.
Public transport in Lucerne, apart from the pedestrianized Old Town, is majorly in the form of city buses the tickets for which range from 3-4 Swiss Francs and can be bought inside the bus itself. If you own a Swiss Travel Pass, you do not have to pay anything.

Pilatus, like a lot of other geographical beauties has a captivating story behind it. It was apparently named after the Roman prefect Pontius Pilate whose cadaver was discarded in a lake on the summit and whose ghost continues to haunt this 2132 metre peak, Southwest of Lucerne. Then there are the truthers who believe that the name is merely derived from the Latin term 'Pileatus' which roughly translates into 'cloud-capped'. A heaven for hikers, Pilatus is accessed by virtue of a Golden Round Trip which basically entails a boat trip on Lake Lucerne till Alpnachstad followed by a ride on the steepest cog railway in the world that takes you to the top. Panorama cable cars bring you down from the peak to Kriens from where you get a bus back to Lucerne. Walk around and click a lot of pictures of the bright blues and the gorgeous greens dotted here and there with winsome whites-typical Swiss beauty. www.pilatus.ch will provide you all the information you need about the timetables and the ticket prices. Having a Swiss Pass will enable you to get massive discounts on your trips. 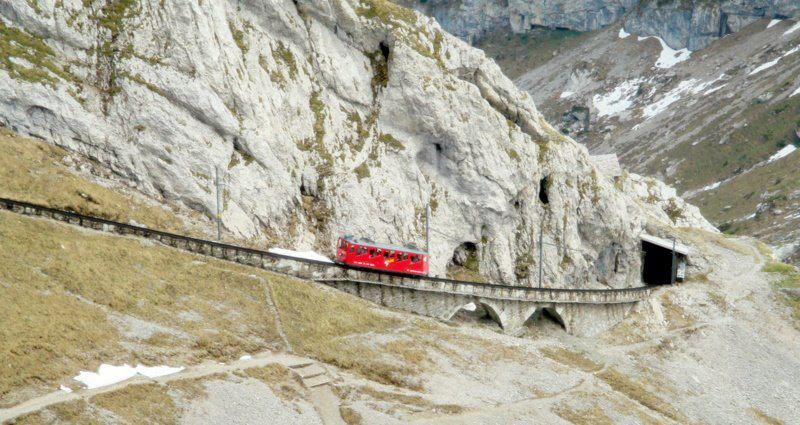 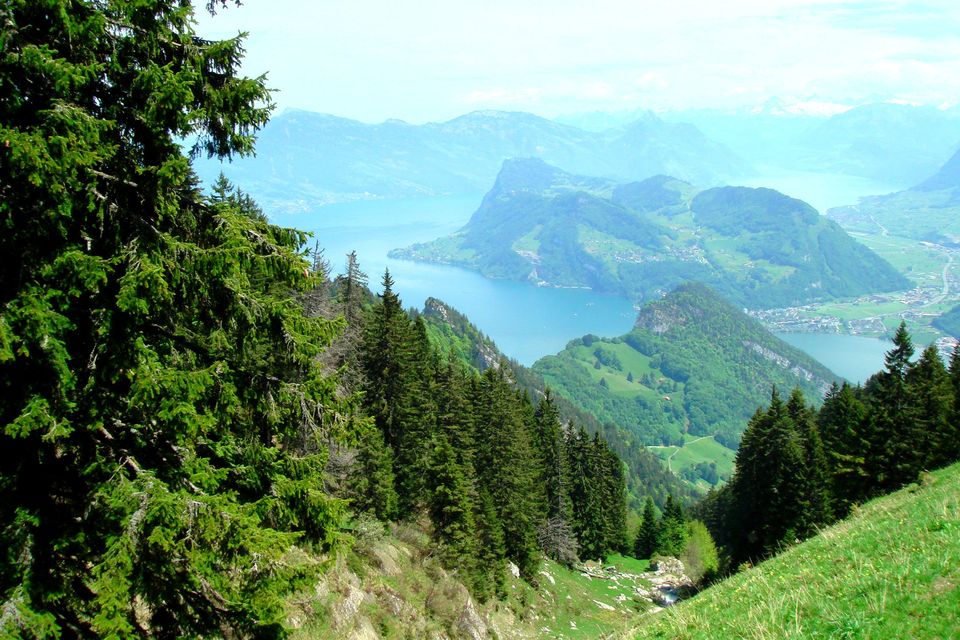 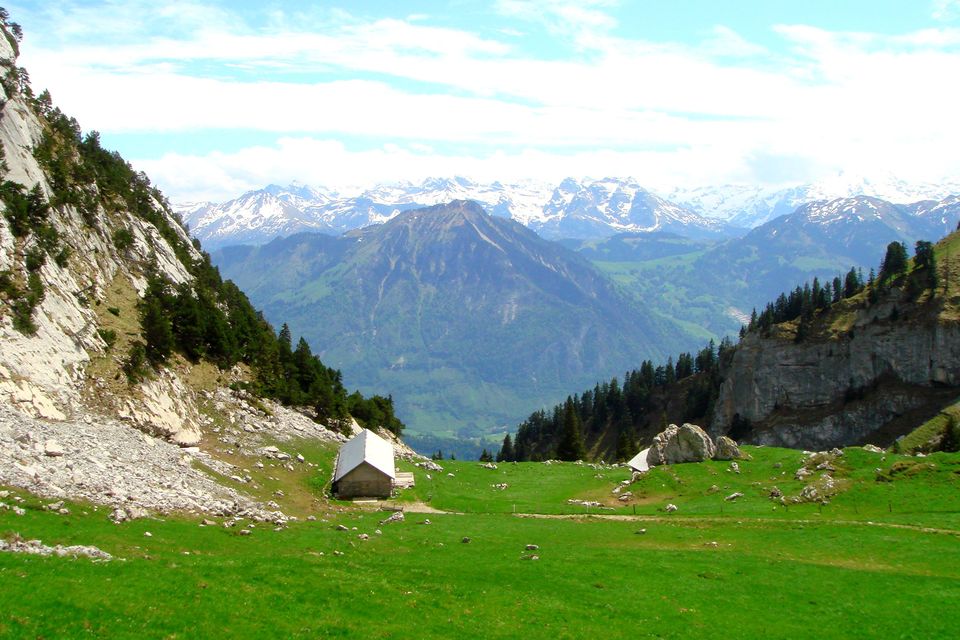 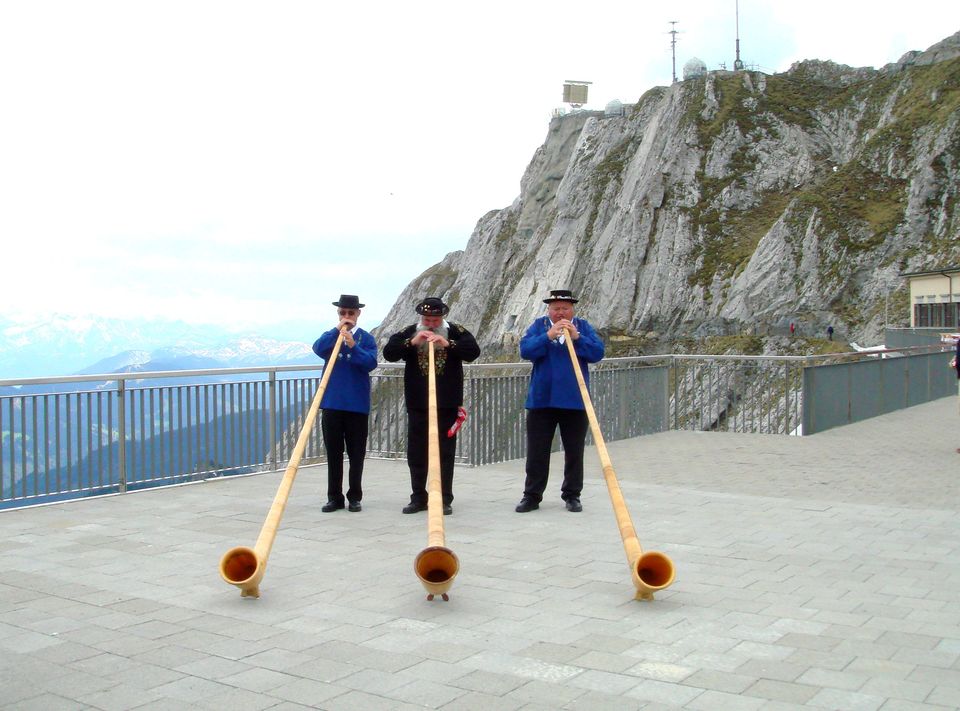 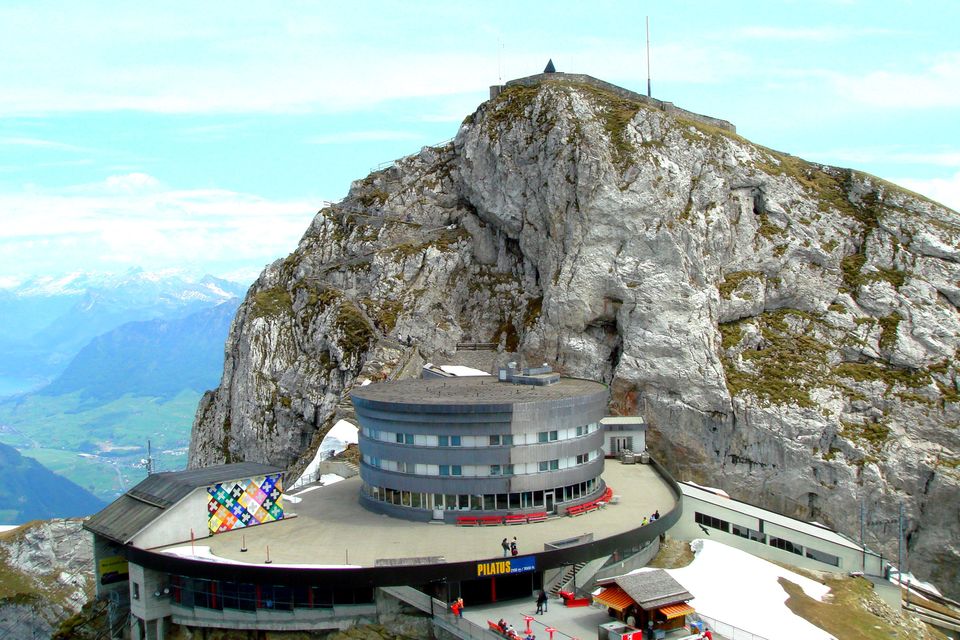 Also known as the Queen of the Swiss Mountains, Rigi stands tall and pretty at 1800 metres. With brilliant views of the Jungfrau, Titlis, Arth Goldau and Zugarsee coupled with the sun rising and setting beyond the horizon of Lake Lucerne, Mount Rigi is fully capable of inducing a deep state of trance and is therefore a must-see for all travellers. Another Mecca for hikers, getting to Rigi from Luzern can be a slightly complicated process and the Classic Rigi Round Trip is therefore suggested. You could also take the train and cable-car connection to the top and back. Information for both is available on the following websites: www.rigi.ch/Adventures/Majestic-moments/Majestic-moments-Groups-Companies/Classic-Rigi-Round-Trip www.fahrplan.sbb.ch Remember that ticket prices are almost reduced by half if you own a Swiss Pass. 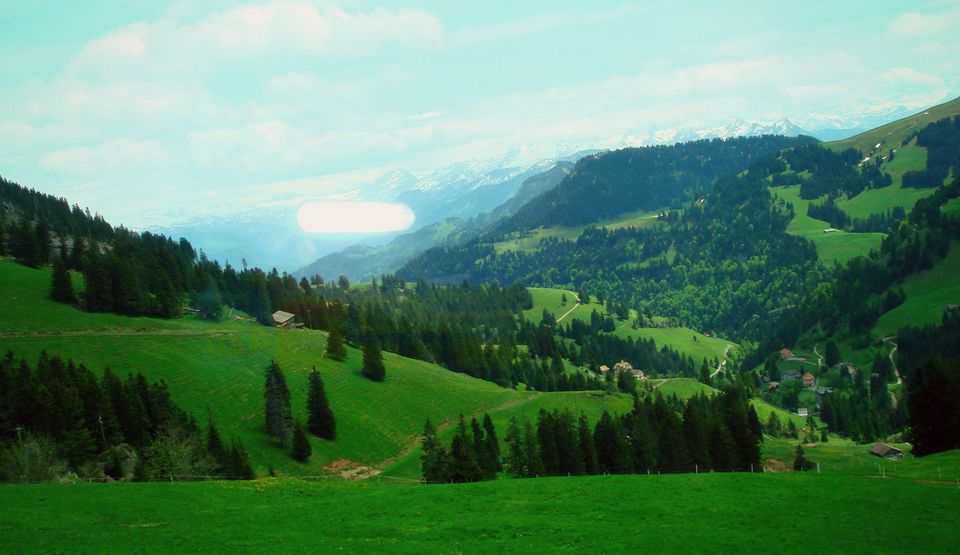 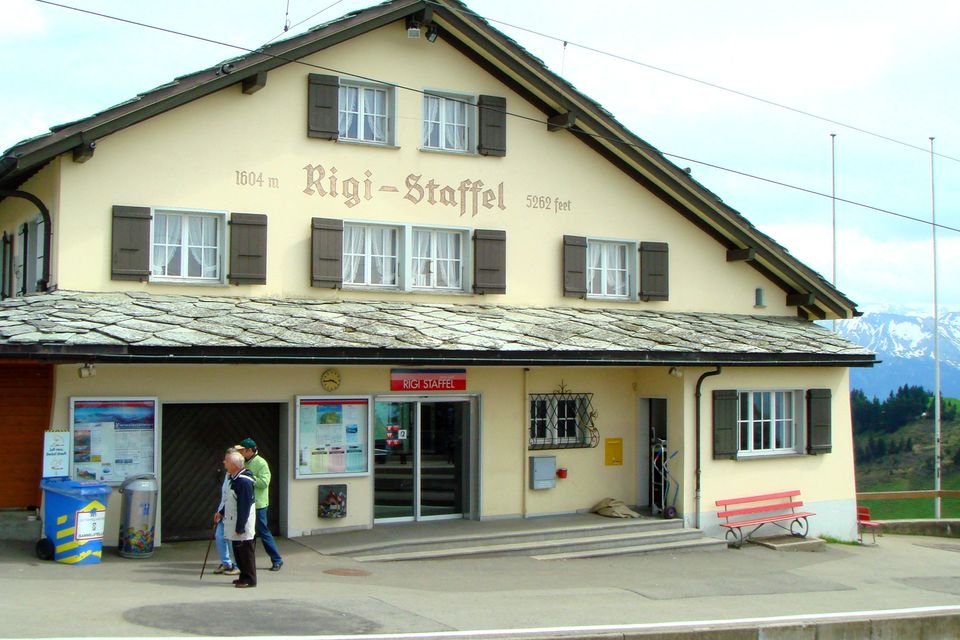 "Snow here, snow there, snow everywhere" could easily be the kindergarten definition of Mount Titlis. 3238 metres above sea level, it is Central Switzerland's tallest mountain and is accessed by a cable car that revolves! The four leg journey starts in normal gondolas from Gerschinalp to Trubsee and then Stand followed by a transfer into the fantastic spinning human invention. After a steep and head-spinning ascent that provides you lovely views of meadows that ultimately make way for the blinding snow, drafts of icy winds greet you the moment you step out of the cable car into Mount Titlis Station. Apart from being as close as one can get to the staggering Eiger, Monch and Jungfrau, Titlis is also a home away from home for most Indians owing to the omnipresence of Bollywood. Switzerland has turned into a miniature version of India because of the huge number of Hindi movies that are filmed here and an elaborate photo studio that houses life-sized cut-outs of Shah Rukh Khan and Kajol from 'Dilwale Dulhaniya Le Jayenge' only speaks volumes about their popularity. There's also a fancy restaurant, a chocolate shop, a glacier park which is reached by virtue of a somewhat scary chair lift and also a glacier palace. A 40 minute ride on the scenic Lucerne-Engelberg Express from Lucerne gets you to the town of Engelberg after which the aforementioned cable cars take you to the top. Checking the Lucerne Tourist Office on Zentralstrasse for the Mount Titlis excursion tickets should get you all the necessary information and the possession of a Swiss pass could get you major discounts. Remember that the cableway closes at 5 in the evening and make sure you carry several warm clothes along with sunglasses. 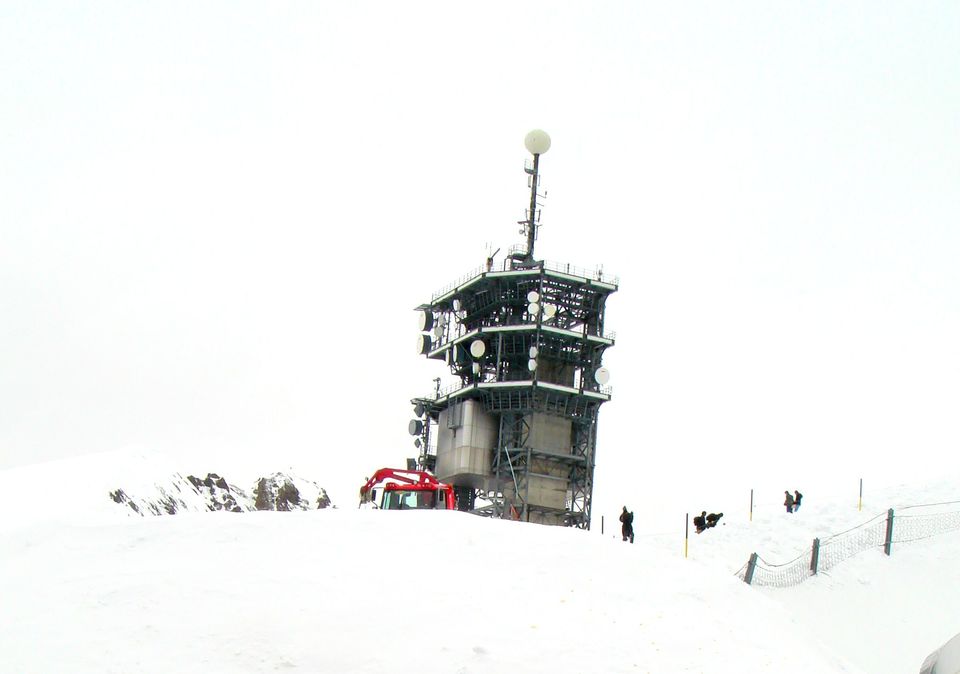 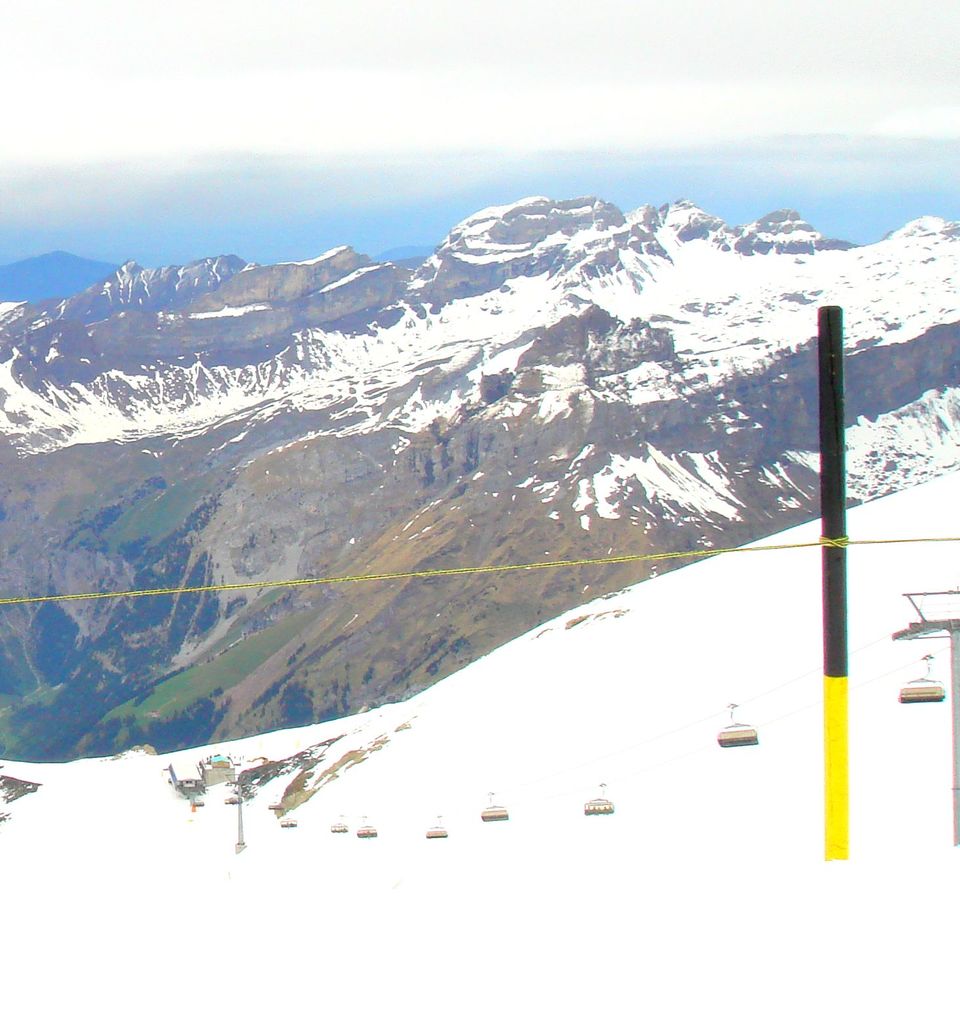 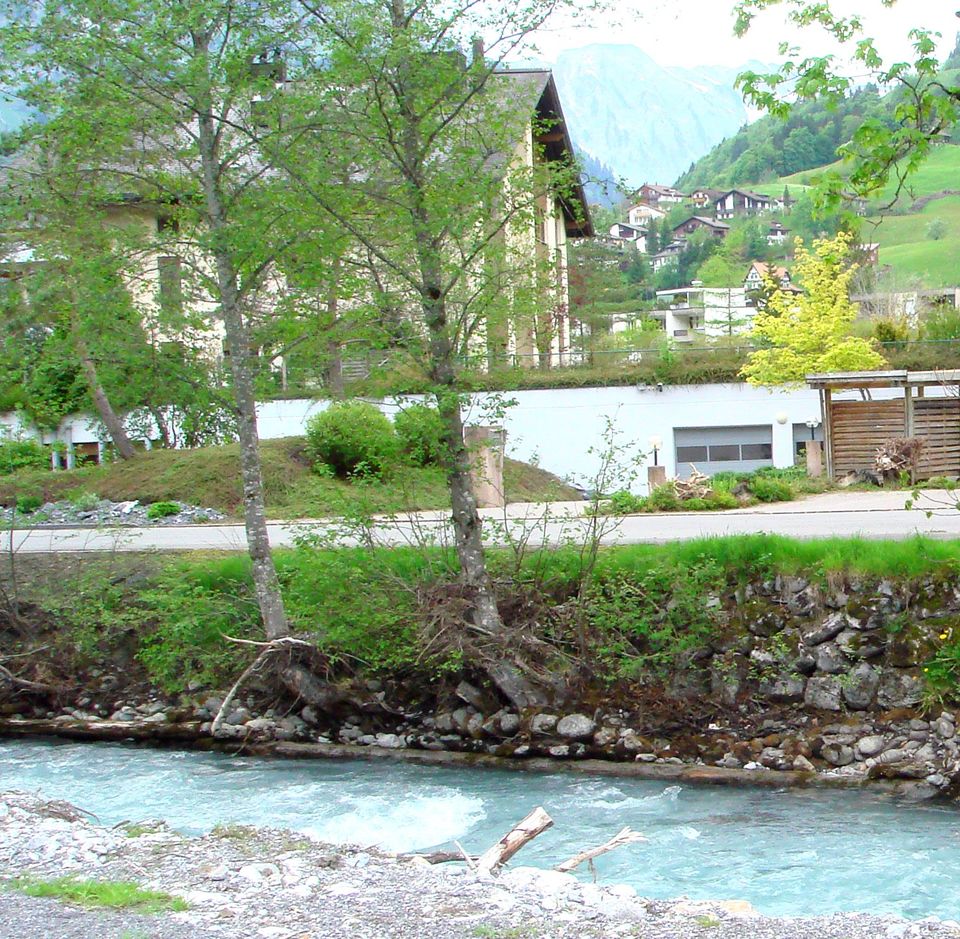 An expanse of serenity and virginal elegance, the Lake of the Four Cantons or Lake Lucerne is fondly known as the heart of Switzerland. A smooth boat-ride along Lucerne, Uri, Unterwalden and Schwyz will introduce you the most splendid mountain scenery along with miles and miles of pastureland dotted with cows and cosy Swiss chalets. Flora and fauna are abundant and so are the welcoming smiles of the locals who always wave at you as your boat leaves for the next stop. Do not be surprised if for a second you believe that you are amidst the fjords of Norway. Paddle wheel steamers and motor vessels take you around the lake and the destinations from Lucerne include Weggis, Vitznau, Brunnen, Fluelen and Alpnachstad. A day ticket on an SGV boat (A popular navigation company in Switzerland) comes for about 70 Swiss Francs and if you are the proud owner of a Swiss Travel Pass, the rides are free. 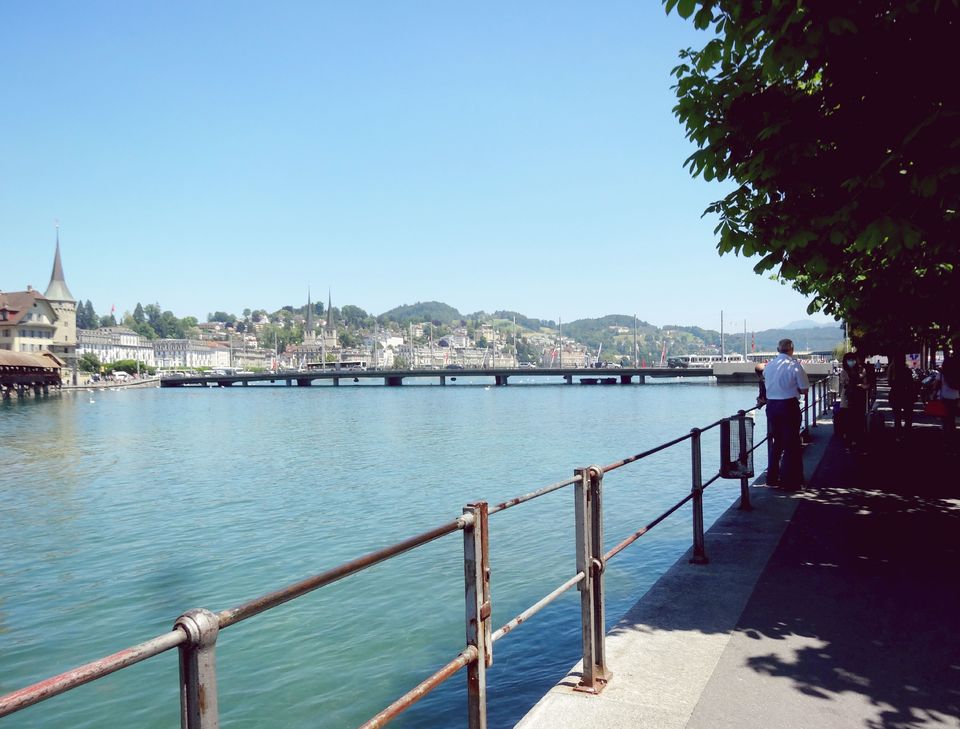 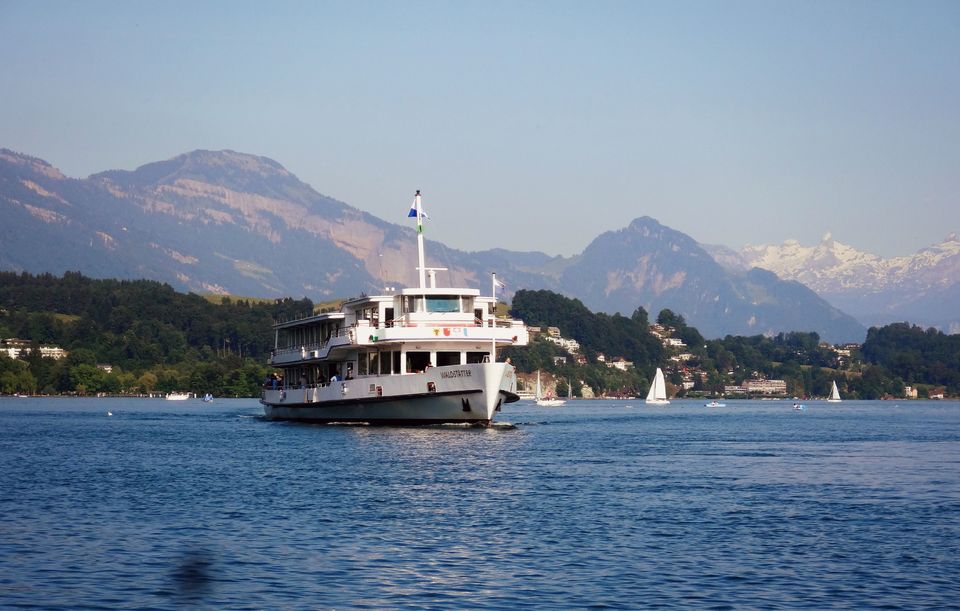 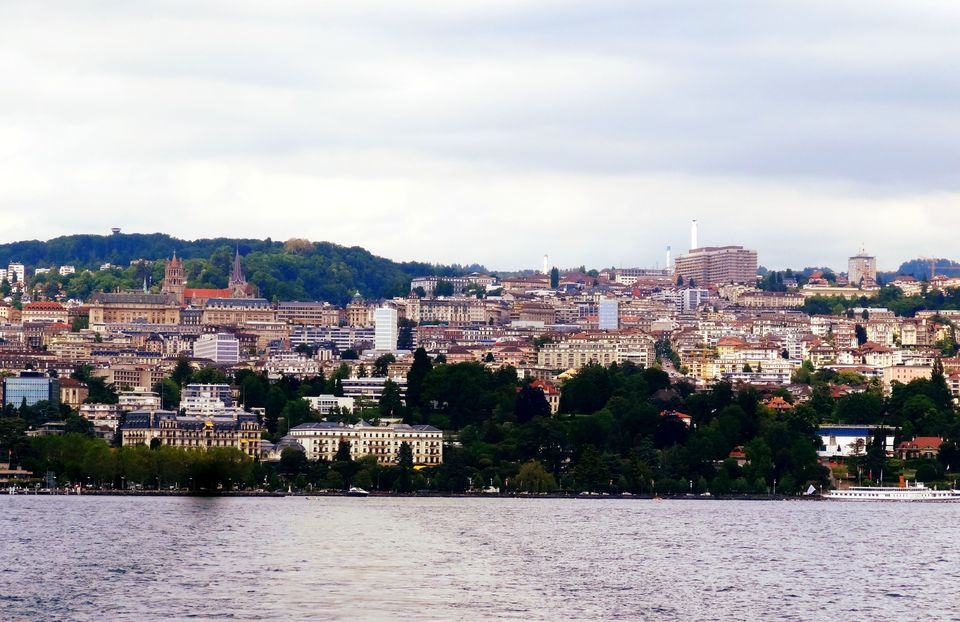 'The saddest and the most moving piece of rock in the world' according to Mark Twain, the Lion Monument was designed by the Danish sculptor Berthel Thorwaldsen and carved by Lukas Ahorn and is nothing but a heart-wrenching depiction of a dying lion. It commemorates the Swiss guards who lost their lives while defending Louis XVI of France during the French Revolution. The 'Lowendenkmal' is located in Denkmalstrasse, about a kilometre from the Chapel Bridge and perfectly walkable. 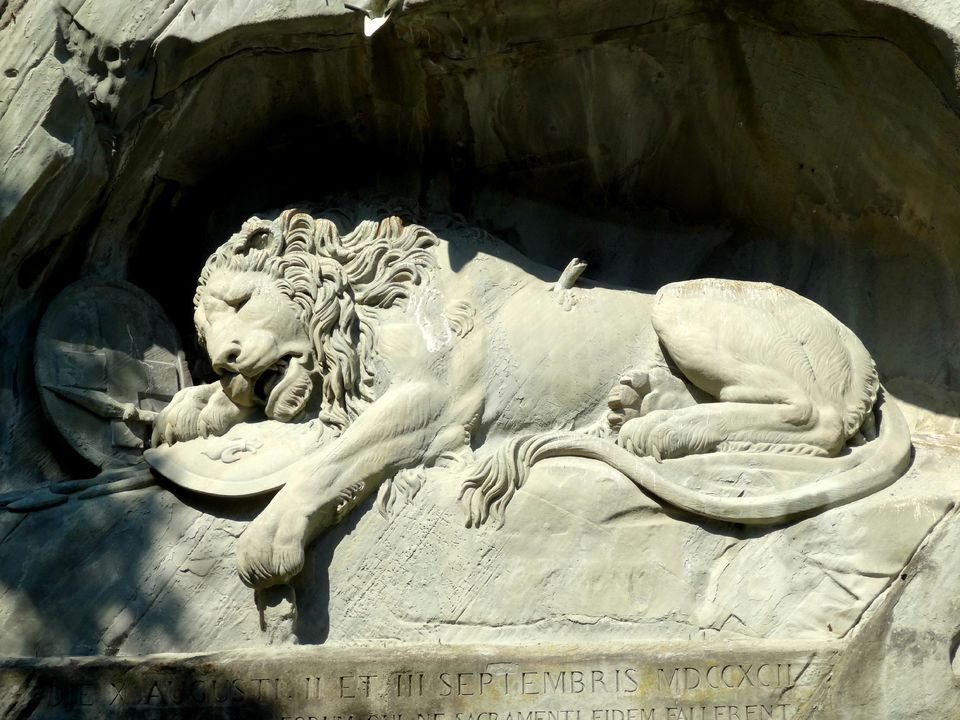 Standing tall above the Reuss River in the Old Town, the Kapellbruke has increasingly become the symbol of Lucerne, especially when it glows at twilight and makes for a pretty picture. This 14th Century water tower was completely destroyed by a massive fire in 1993 and had to be rebuilt. The panels on the roof of the oldest bridge in Europe contain paintings by Heinrich Wagmann depicting the glorious history of Switzerland. Make sure you cross this bridge when you get there. 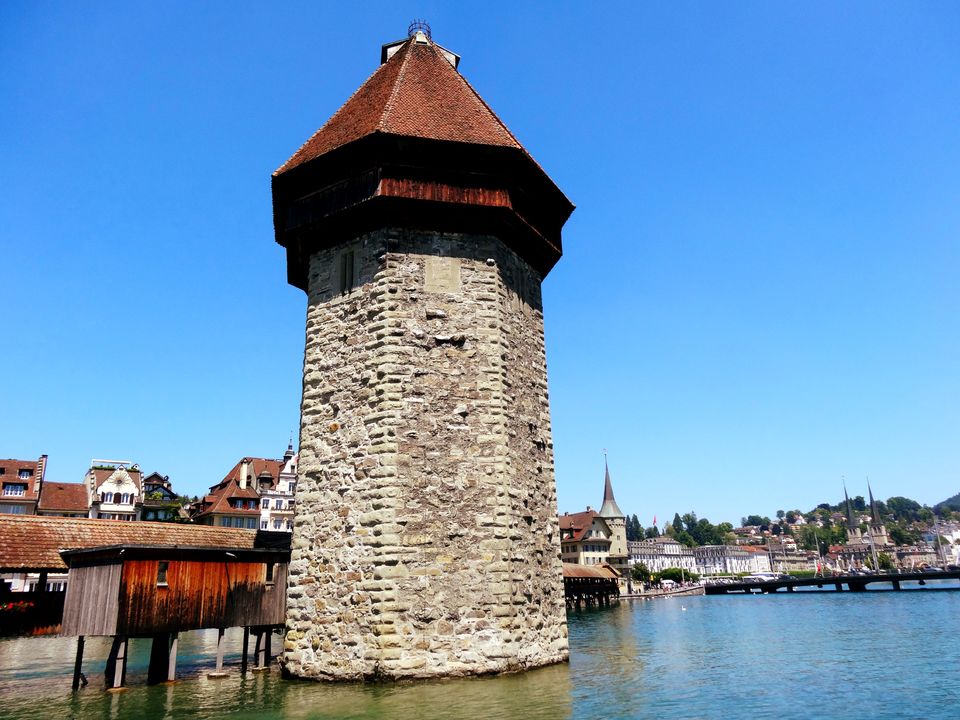 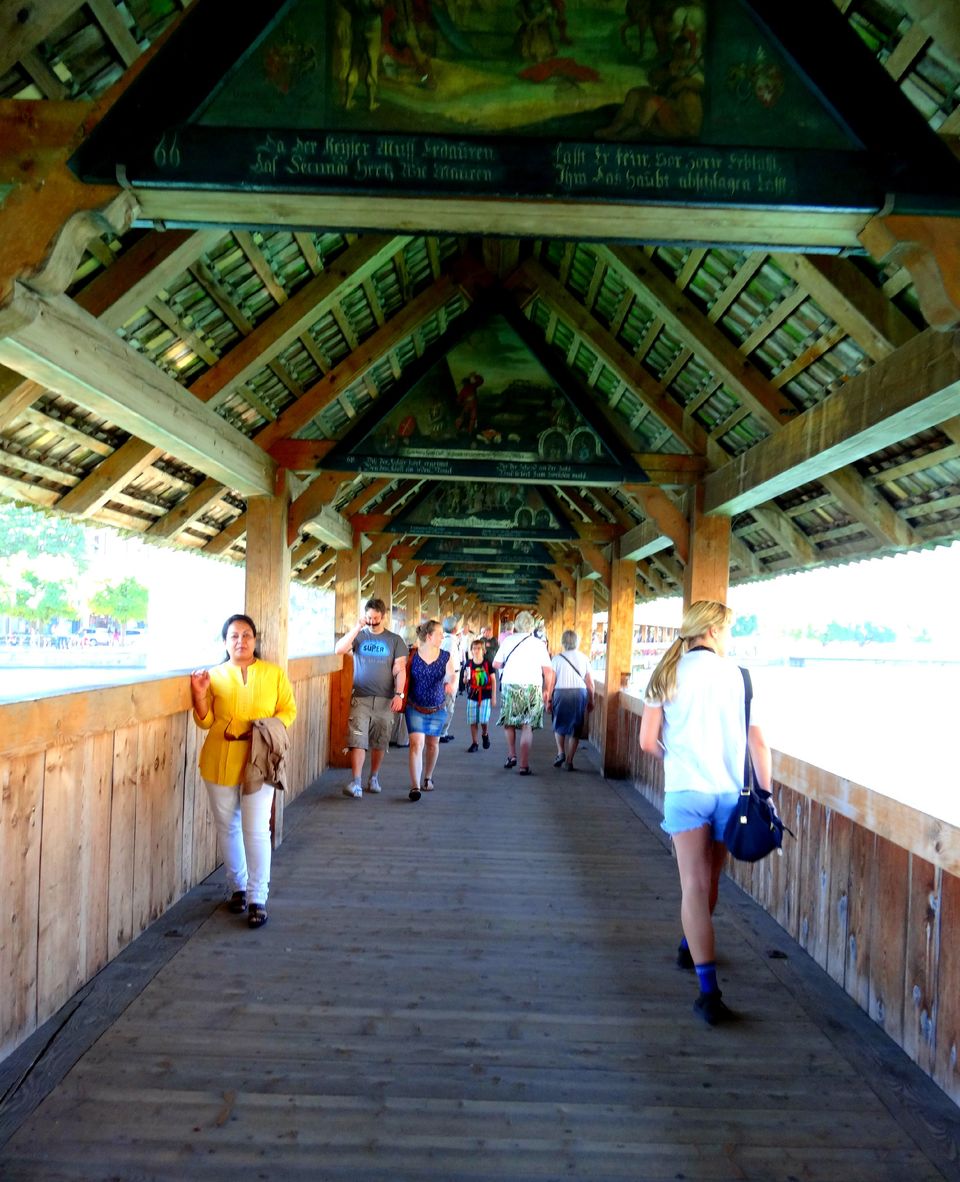