My Tryst with Triund and Indrahar Pass Part 2 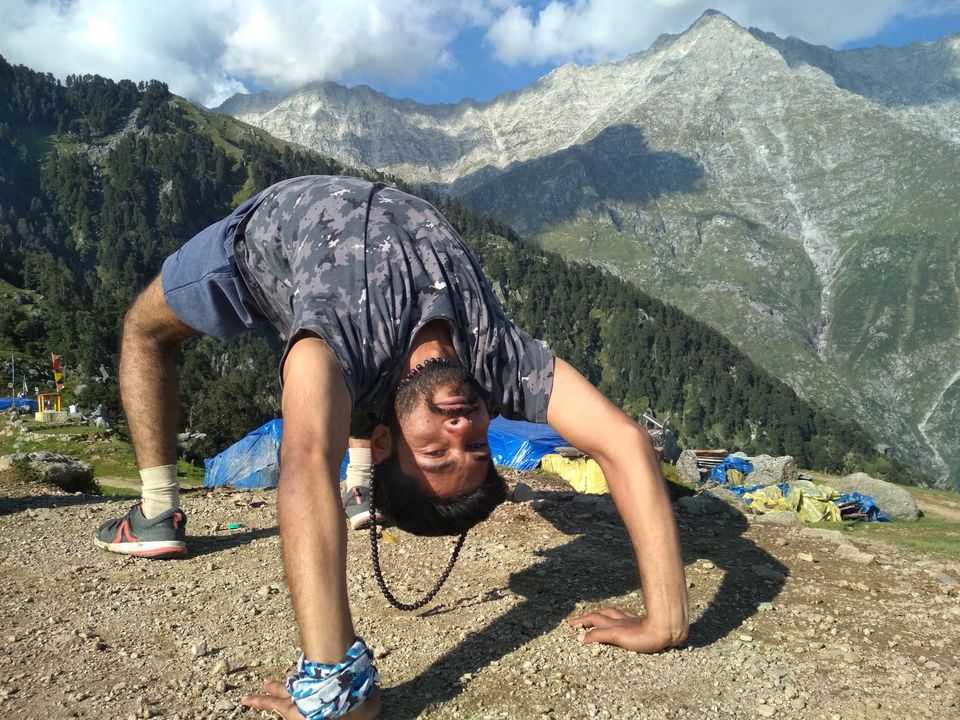 I woke up by the sound of alarm. It was 3:30 am in the morning. I got up, packed all my stuffs in the tent itself, then slowly opened the zip of the tent slightly to get to know the temperature outside. It seemed fine. I opened the zip completely and stepped out, covered completely from top to bottom.

Then, I lost my way going slightly off the trek. Somehow as happens always with me, I came back to the right trail. I had learned the signs and symbols for trekking in my rock climbing course. So, I kept searching for the signs and hoped from one symbol to another. For amateurs, it is something like this 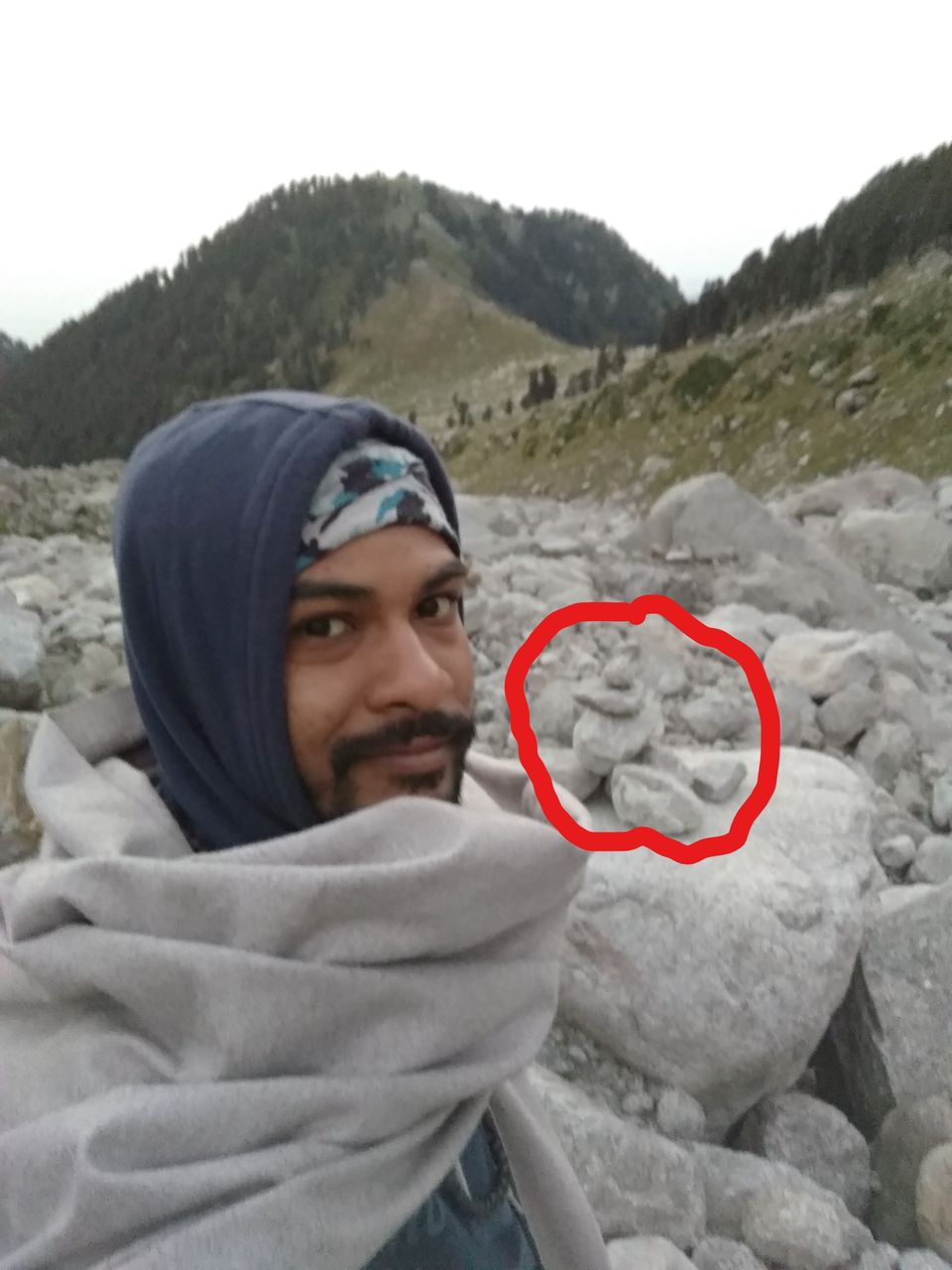 I finally reached the top at 10:15 am. The view of the Himalayan peaks is mesmerizing from here. 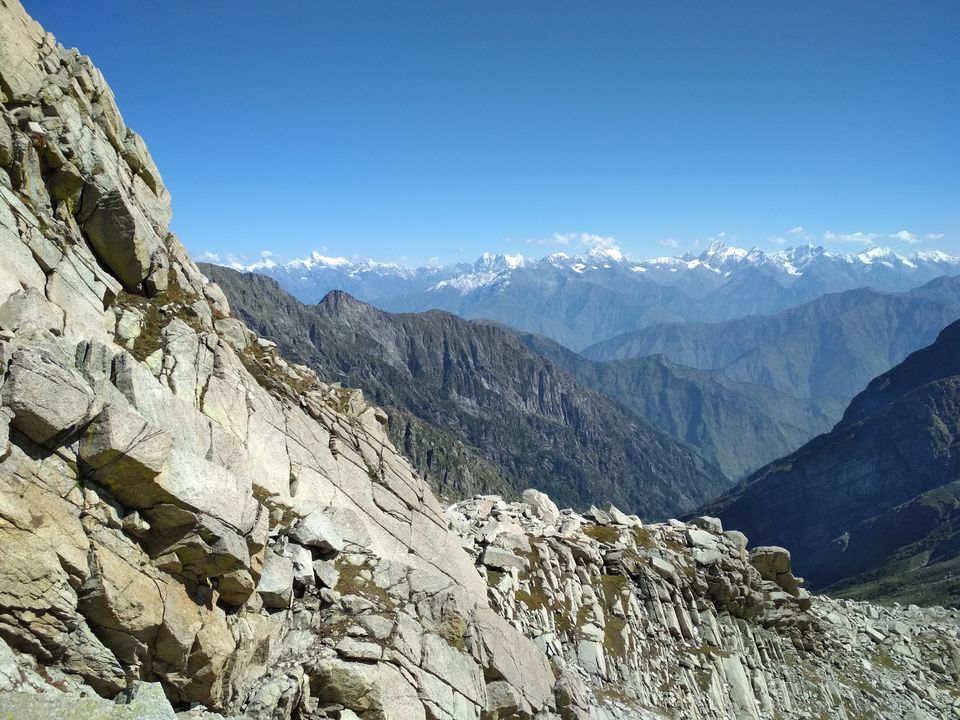 I was all alone in the mountains. It was an amazing feeling. I shouted in all directions and enjoyed listening my own echo. I laid down in the soothing sunlight and listened to some music. Then, I started descending at 10:45 am. 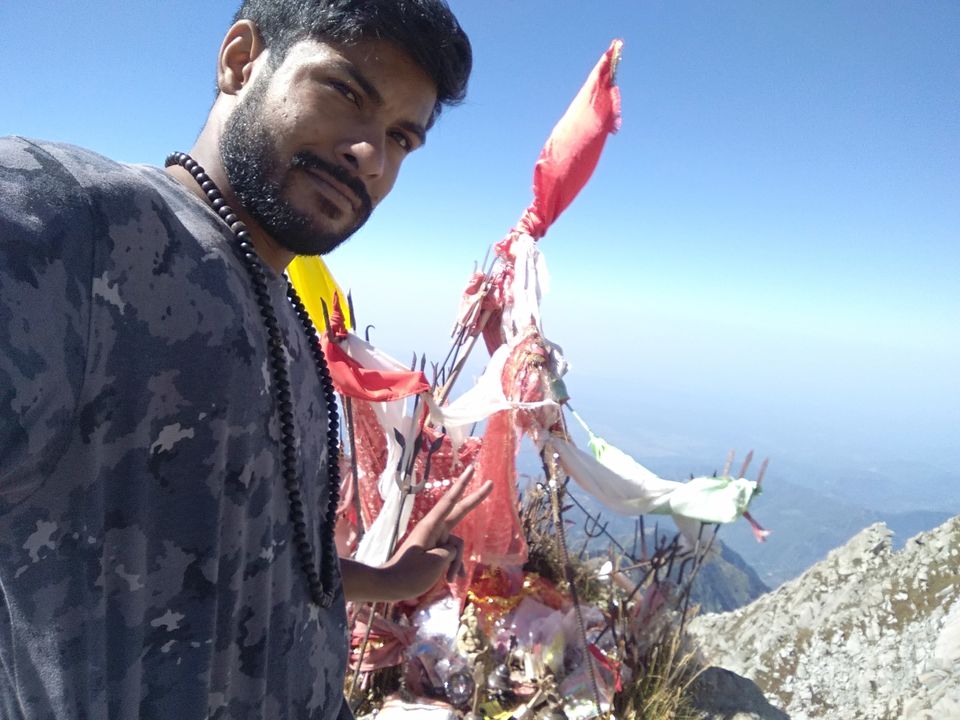 I met David and his wife while coming down. They seemed really impressed by my harmonica session last night. I am seriously considering shifting to Canada and take up harmonica playing as a career option.

The Red mark is from where we started 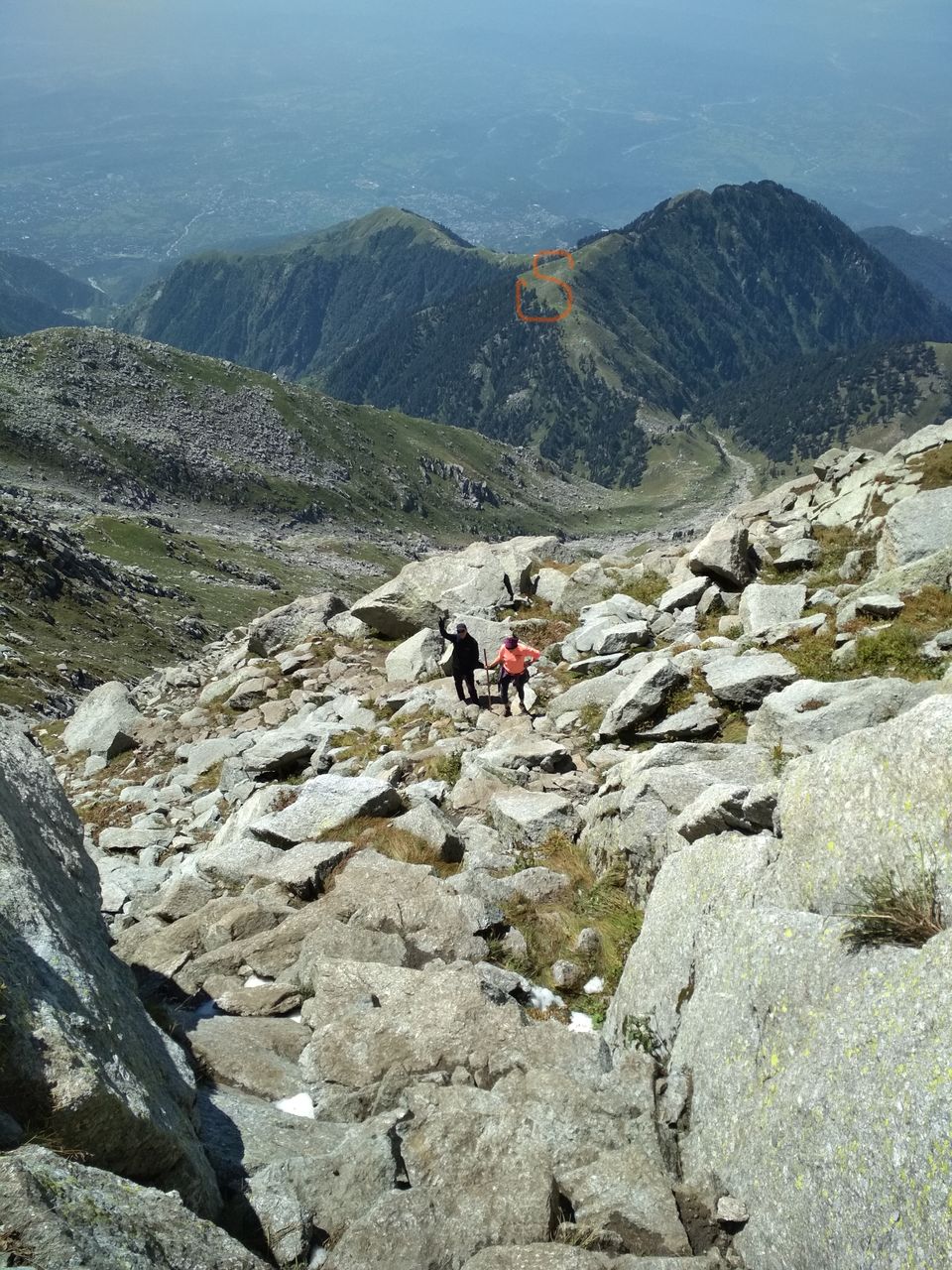 Climbing down was harder than climbing up. On the top of that, my supply of limited food and water ran out. The waterfall was still some distance away. I kept walking while taking some rest in between.

Finally, at 1 o o'clock, I reached the waterfall almost half dead. I dipped my head into the water and drank water directly. It was satisfying to the core. Then, I laid down at the stone nearby. I filled my bottle and started again.

Then, I started back to Dharamkot at 4. It was a quick descent. I met a beautiful spiritual lady on my way. She was also going back. Heading from South Africa, she was deep into Vedic studies. To my utter surprise, she also chanted a few mantras in perfect Hindi. We talked about a lot of things. I gave her a very brief summary of Ramayana. I hitched ride with her from Bagsu to Mcleodganj. On our way back we had discussions about the chakra theory, meditation, Buddhism and almost all the religions of the world.

At Dharamkot, yes those are white, fluffy clouds behind me 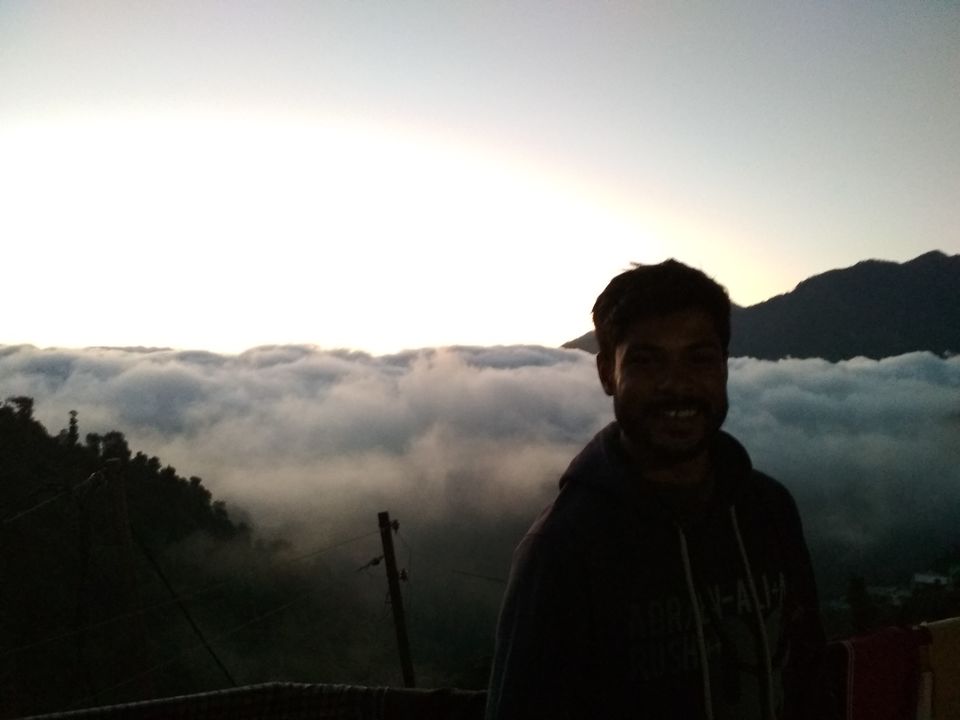 We had our dinner and I dropped her to her place. After coming back, it was almost 10. Dharamshala was another 1 hour away and the last bus would have left by probably 10:30. So, I called my hotel owner, and asked for a room for the same price which I had stayed on the previous day. He agreed. I went to the hotel and crashed in my bed.

When I woke up, it was already 7:26. I bathed and packed my bag to the bus stand. I got a public cab and reached Dharamshala. I had my breakfast at the same place where I had it earlier. After breakfast, I headed for the tickets. But, the last bus to Delhi had just left, before 15 minutes. I wished I had booked my tickets first instead of gluttoning myself with food.

I then took a ticket for Chandigarh instead. The bus was scheduled to depart at 10:30. I met Nina and Pam, the couple from the Netherlands who were there with me at snowline cafe. I showed them the pictures of the summit top. They were heading to Amritsar, where they would visit the Golden temple and wagah border. They would go to Jaisalmer from there.

My bus arrived and I bade goodbye to them.

Did you like this post or have any feedback? Let me know in the comments section below!

Planning to travel to Triund. Check out the 5 Cheapest places of Stay for a Solo Traveler.

I had my small dynamo battery with me. After walking a couple of steps, I found a flock of sheep. I guess they were pissed off as I disturbed their sleep. So, they called their bodyguard, the Dog who came charging like anything at me. I didn't lose my control and like any other Indian started calling cho cho cho, tommy tommy, you are a good dog. The guy (dog) got flattered and calmed down and it also told the sheep to go back to sleep. I guess it also gave them a mild rebuke.

I walked carefully for 2-3 km, looking for the trail lest I should get lost. After 1 hour, I reached the place from where I fetched water yesterday. There was a tent and few people were snoring in there.

I thought it would be a good idea if I rested there for a while.

After 30 minutes, I saw a torch light some 300 m away. Thinking that this might be some group heading for Indrahar pass, I walked hurriedly to catch up with them

I again encountered another flock of sheep, then followed the dog and I replied with my same technique and the result obviously had to be the same. I had till then surpassed two such flocks of sheep. I was patting my own back that dude either I was too good to handle the dogs or the mountain dogs are very humble at least with humans.

On reaching the tent, I found that it was one of their own guy who had went out for a loo. It was still dark then. So, I sat there and had a tea till sufficiently good light. I asked my way and started on the mission to scale the summit with two chocolate bars, a biscuit packets, a few candies and a half filled water bottle.

First of all, came a waterfall. I drank some water and filled up my bottle. 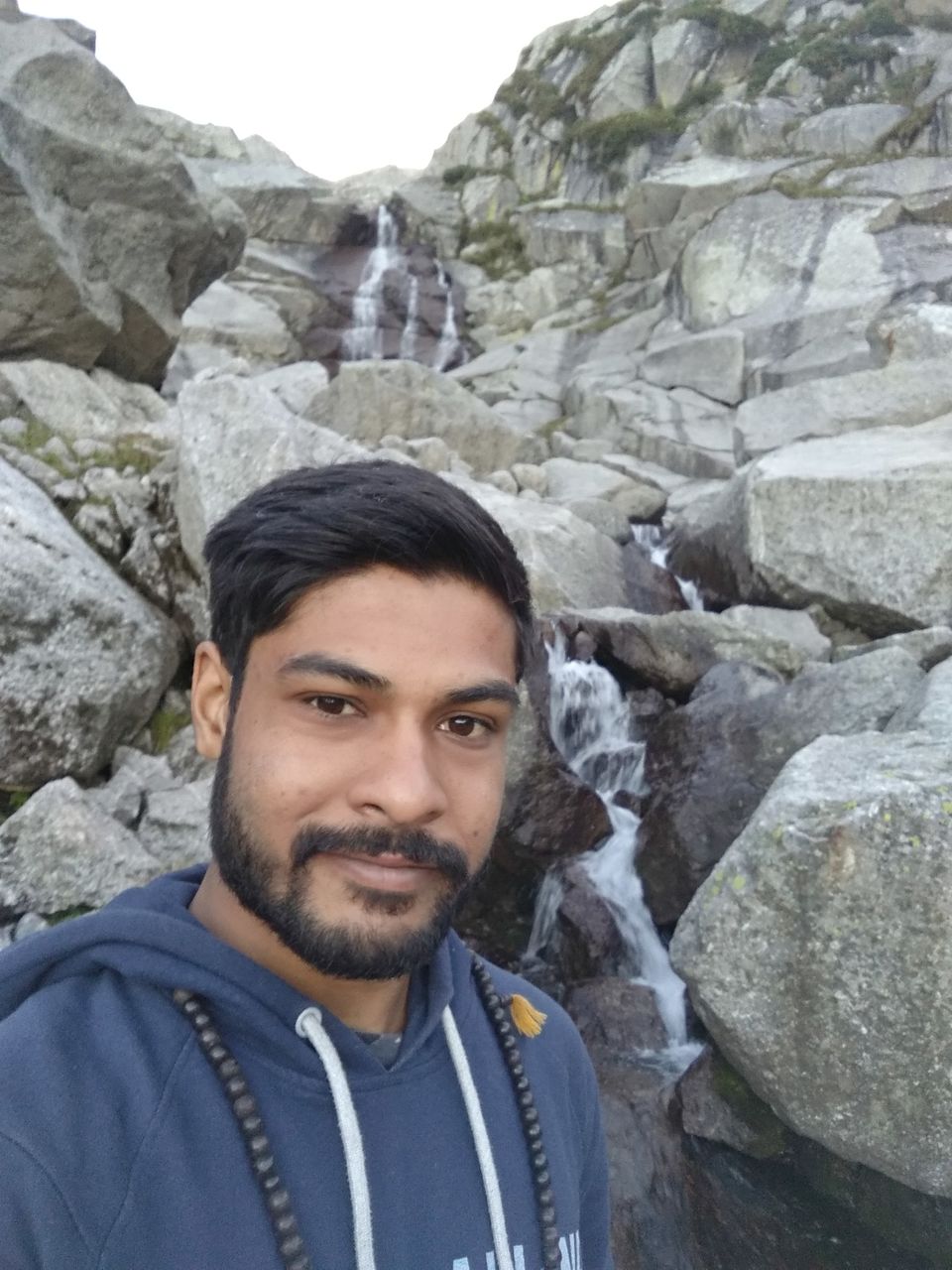 Finally, I reached the Dhauladhar cafe at 1:45 pm and had my lunch. After some rest and food, I started again at 2:15 for Triund. I met the snowline cafe owner on my way and reached Triund at around 3:30. I took some pictures there, my standard jumping one and the one Chakrasan pose. 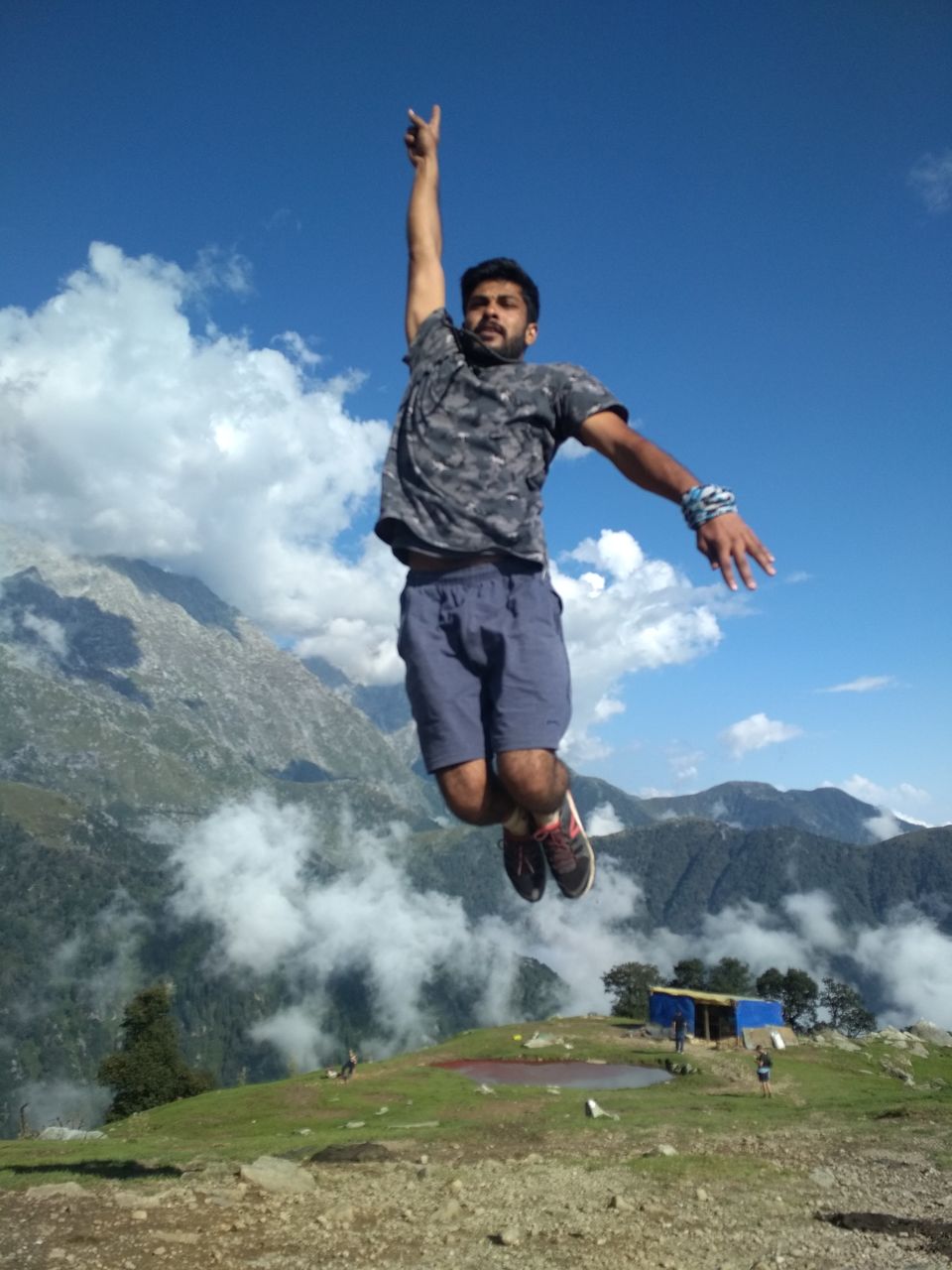