As usual i woke up at 4 and made it to Janki Ghat by 6 with my camera man. Both Janki and Anandmayi ghats are very small in size and is difficult to be recognized. The only mark of identification for Janki ghat is it's colourful stairs while the other has none. Janki ghat is said to be a bathing ghat. Both the ghats are very unpopular in performing any religious or cultural activities.

Also, earlier Anandmmayi Ghat was also known as Imalia Ghat. In 1944, Ma Anandmayi bought that area from the British and made it cemented in order to run an ashram (or organization) which is involved in performing a number of religious activities. Since this ghat was initiated by Ma Anandmayi so is the name of this ghat. 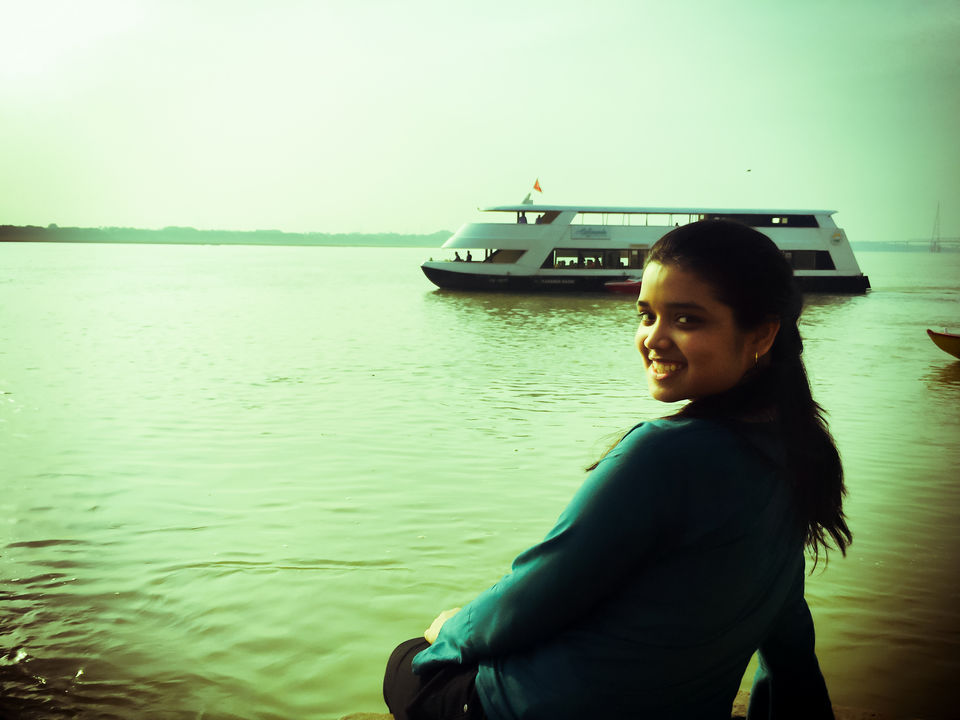 As i was shooting my YouTube video suddenly i saw a cruise passing by. You can see how much happy i was when i saw that. After exploring Janki ghat we went into the gullies in search of Shri Dig-amber Jain Temple. We were almost lost but then we finally found our way to the temple. That place is said to be the birthplace of Suparshwanath, 7th Jain tirthankara. It was very beautiful and peaceful. The temple was echoing with the prayers of the priest. Then through a veranda i got to see river Ganges from a different perspective. And it was mind-blowing.

Next, we went to Anandmayi Ghat. There a group of people were talking loudly, making it difficult for me to shoot a video. So i went up to them with confidence and asked them if they can be silent for few minutes. And they agreed to me. I think if i didn't had that passion for my work, i would never had that courage to went up to them. Travelling is really helping me to improve my public relation.

Again we went into the gullies in search of Anandmayi ashram. This time it didn't took much time to find because people were very helpful. We took the permission and started shooting in the ashram. We saw children in yellow clothes going out towards river Ganges to perform religious activities with discipline. We were so engrossed in filming that we didn't recognized we went close to the temples in the ashram with shoes. We got scolded for about a minute and then had a sign of relieve when we came out, also we laughed on ourselves. On a serious note, this shows that we had to be extra careful when we are at religious places because we might hurt someone's believe. And at that time even 'sorry' doesn't works.

We were left with just one temple which was a bit far from the ghats so we set the location on Google Maps and went. But then i saw something on my way that had made me fully mad. I saw a temple in the shape of a huge shiveling of grey colour. It is called "Bankhadi Mahadev Temple". I couldn't stop myself to pay a visit and make a video even though it was not on my script. It was not at all crowded and the environment was very eco-friendly. The temple did't had an ancient outlook but a modern one.

Then we reached to our last location, i.e., Shri Ram Janki Temple. This temple is very beautifully designed and a bit crowded as compared to others. We took the permission and started shooting. There were students too siting in a row and chanting hymns. As we were about to leave we saw a very emotional scene. A student's parents came to him and when they were leaving he started crying, wanting to go home. Both his father and mother tried to convince him respectively. But he was convinced only after his parents promised to visit him again in the nearer future. I became a bit emotional that we think our life is difficult but look at them. We just spend half a day in the educational institute then come back home but they spend months and years away from their home, away from their loved one's. Everybody's life has a different storm so respect.