When we sat down to decide where we should go for our Christmas holiday, we both thought it would be fun to do a "snowy-cold-Christmasy" place and to hit a few countries we have not been to - so we picked Tallinn-Estonia, Helsinki-Finland, and Stockholm-Sweden. At this time of year, mid December, snow is iffy in these countries.  Wow did we hit the mother load!  Record snowfall in all three!

Our first stop was Talinn in Estonia.

Christmas Eve is the highpoint of the season.  They used to put out clean straw and place it on the floor and table to bring good luck,  After dinner, the family would leave the food on the table for the souls of ancestor.  It was believed that ghost moved around freely on Christmas eve.  Santa is a modern day character to them.  We thoroughly enjoyed our three days in Tallinn.

In Finland they believe Joulupukki (Father Christmas) lives in the northern part of Finland called Lapland.  They are one of the only countries where children see Father Christmas in the act of giving the presents.

Then came the traumatic part of the holiday - our 14-hour cruise to Sweden (well my opinion). It started out great - we had a glass of wine and sat at the front of the  ship as we pulled out of the very frozen port.  Out into the black of the night. Seeing the night skyline of Helsinki as the ship pulled away from shore was striking. We enjoyed a few variety shows just like a long cruise. The last few hours of the trip, when we were close to land, was stunning scenery and very enjoyable.

Next, we reached Stockholm in Sweden. They had a Christmas Market on Sundays or as they call it Julmarknade.  In Sweden Santa is called Jultomten and is a cross between a little gnome and a German/British Santa.  The kids leave him a bowl of porridge on Christmas Eve. And of course being Sweden - grilled herring  This was one of my favorite dishes of the trip.  As we were eating it, a local started talking to us about it.  Said it was a very traditional dish, but from long ago.  We asked him a bunch of questions about the town.  Funny enough, a large aviation population lived there.  He was a pilot and his wife was an air traffic controller.

We knew very little about Tallinn before arriving, other than it was supposed to be the quintessential Christmas town - and that it was! Tallinn is the capital of Estonia and the largest city. It is a very quaint old town with old world charm. The snow made it extra special. The old town is a UNESCO World Heritage Site. Tallinn as a city goes back to 1154 and has quite the history of who ruled it from Denmark to Sweden to Russia to Nazi Germany and back to Russia. Finally, on Aug 29, 1991 Estonia declared independence and Tallinn became its capital. Today Estonia considers itself a European/Scandinavian country with close ties to Finland (ethnic, language and culture). On January 1. 2011 they will officially begin using the Euro. We bought Kroon but found out we could have used Euros. 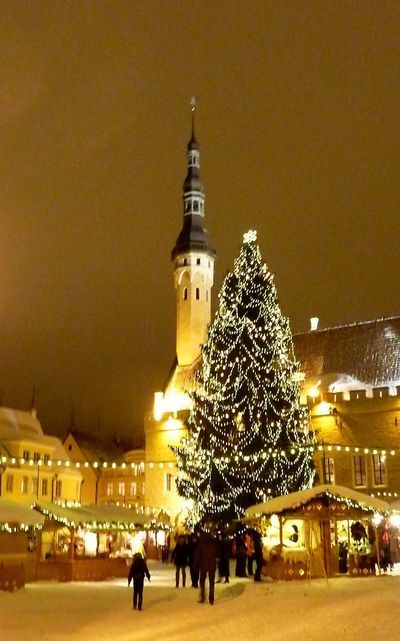 I loved the romantic boutique hotel we stayed in, the Three Sisters, built into three famous medieval houses which, were originally built in 1362. The room was very modern yet had the backdrop of the medieval times. Our bed had a billowy canape and in the room was a huge claw-foot tub. Two days before we arrived they received a foot of snow. We did not get to see the quaint cobblestones, but the snow made the town magical. 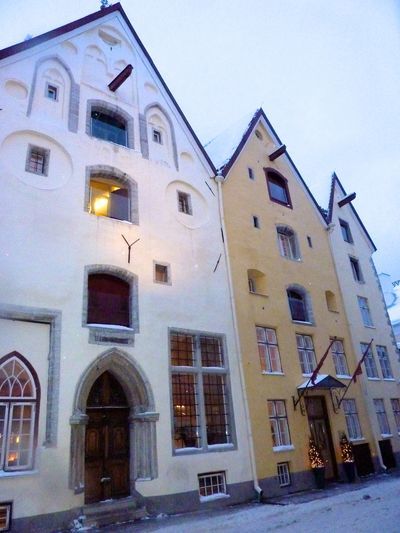 The Kadriorg Palace is set in a beautiful park where the Prime Minister's house is located. The Prime Minister is the actual political head of state, and their President is mainly a symbolic figure, who does not hold any executive power. We are pretty sure he was there as the flags were up, the red carpet was out, and guards were walking everywhere. It was a lovely walk through the park. The Palace and park were created by Tsar Peter I in the 18th century for his empress Catherine. The name, Kadriorg, means Catherine's Valley. We toured the Royal Palace, which is now an art museum. 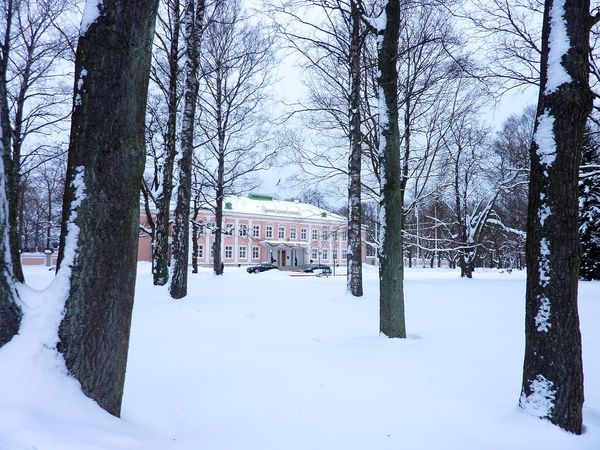 We also toured the Kumu Art Museum. It was very modern structure and had some interesting exhibits of Estonian art from the 18th century on. On our walk back to the hotel we went through a neighborhood and found the houses to be quite charming and very colorful. Not what we were expecting in an ex-soviet country. 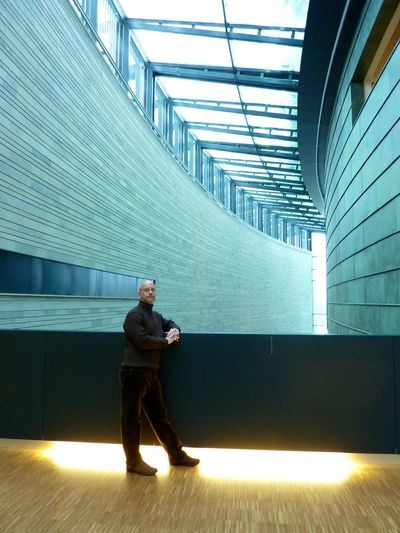 To get there, we took a two-hour ferry ride. Looking back on the picturesque town of Tallinn from the ship. We claimed a round table at the front of the ship. I took advantage of this time to catch up on my sleep! Helsinki is in the Baltic Sea. Founded in 1550, it is the capital of Finland. It was ruled by Russia from 1089 to 1917, the year it proclaimed independence. Today it is a very prosperous city and has a high standard of living. It is one of the World's northernmost capitals and has a lengthy and very cold winter, which lasts from October to April. Winters are also very dark with the sun setting around 3:15 the days we were there. They also had a fun outdoors Christmas Market and a special art show going on the weekend we were there. We bought two beautiful coffee cups made of ceramic with a felt cozy they sit in. 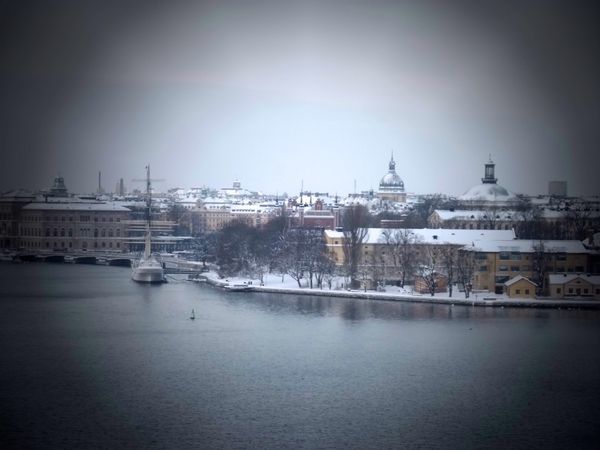 Our hotel, Hotel Katajanokka, was an old prison dating back to 1837. It served as a prison up until 2002 and then converted to a hotel in 2007. Our room was the equivalent of two prison cells and was very quiet, as it should be with those thick walls! At breakfast they served us on plates like the prisoners would have eaten off of. All of the workers and maids wore striped black and white shirts. Hokey, yet it was fun. One cell was kept in its original state so you really could see what it was like. 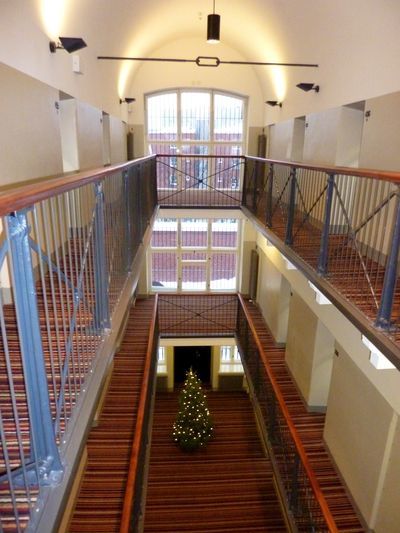 Our stay in Helsinki was short (one night, so we did not get to see many of the tourist sights. This is the Uspenski Cathedral built in 1862; unfortunately, it was closed when we went to see it. It is the largest Orthodox Church in Western Europe. 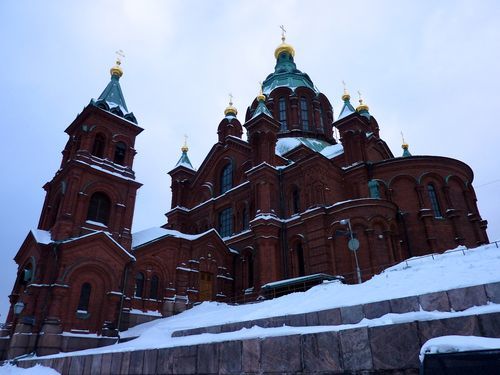 Stockholm was a pretty city but it did not have the quaint feel of Tallinn. Lots of snow here too and it snowed everyday we were there with temperatures around 18 degrees. For some reason doughnuts seemed to be a big seller on the streets. We figured we needed to try one - the verdict, okay but not great. Not like a Belgian waffle! The downtown area was like any city with lots of chain stores and restaurants. There were a wide variety of international foods (Italian, Chinese, Thai) to choose from, but really nothing local. 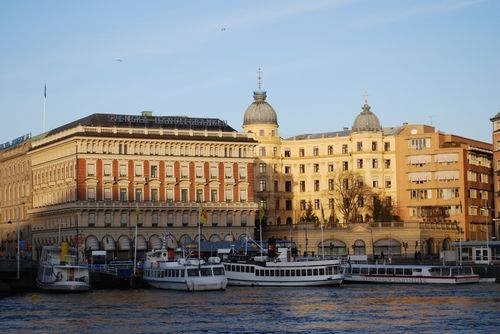 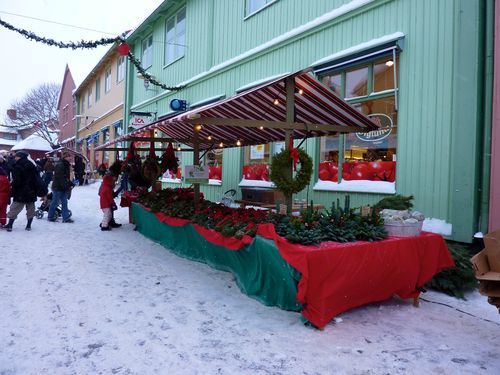 In Stockholm, I preferred the Gamla Stan, the old part of town. It dates back to the 13th century and was very picturesque. We walked (schlepped in snow over a mile) across the bridge to get a pretty view from across the harbor. We took the bus back. 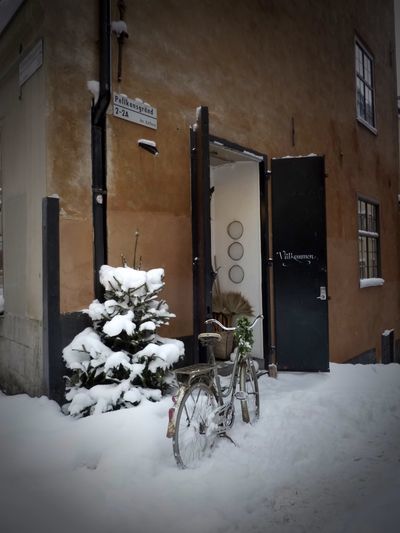