Toronto Travel GuideToronto TripsToronto: A Few Of Our Favorite Things To Do & See

Toronto: A few of our favorite things to do & see

Pretty much my final birthday celebration was yesterday when Luke paid for me to go to Medieval Times in Toronto. Our primary reason for going though, was to celebrate our neighbour's Mom's (part of our substitute family as our families are both in England) birthday! I don't know whether you have ever watched Cable Guy with Jim Carrey, but Medieval Times was just the same as that in the movie. Oh...and the horses. Dozens of andalusians frisking around with big necks, muscly bottoms and flicky toes! Rearing and champing at the bit. At this point Luke started to get a bit bored. Maybe because I was trying to tell him exactly what a flying change is and how you know if a horse is cantering on the correct lead. Sam, however, was waving his green flag with all his might, demanding more beer for his newly purchased tankard and yelling 'you going down red knight' at the top of his voice! So funny! Luke was much happier when the games and fighting started and I stopped gas bagging about how to make a horse leg yield and rein back. Everyone there was divided up into colours according to where they were sitting. We were all in the green section, which meant that our knight was the green knight. The games started and were initially not dissimilar to a gymkhana, but by the end they were jousting and sword fighting. It was very staged, but had us all cheering and booing like crazy medieval bloodthirsty paupers nonetheless! Everyone sat around a sort of dressage arena to eat and whilst we were watching the entertainment the food was served on pewter crockery and consisted of soup, half a roast chicken, spare ribs, a potato and a tart for pudding. Our serving wench was excellent at topping up our potion. No cutlery is provided so wash your hands well before you go! There was also a falconer, who I did feel sorry for, as his bird would just not obey him! All in all, it was an excellent, fun novelty night with good food and good company. 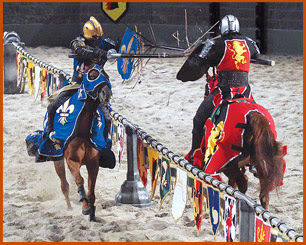 This is a yearly exhibition that lasts 18 days. There is so much to see and do it is clear why they hold it annually! I can't write about everything there is to see, but I can write about the things I saw! First off - the amusements! If you are a fan of small cuddly teddies, or even gigantic fluffy companions as big as you are, there are so many stalls where you can win some! Yesterday, myself and my group of companions won a small fluffy teddies, two smurfs and a unicorn (clearly I kept the unicorn - you know how I love them, being a huge fan of the film 'Despicable Me' - sooooo flufffeeeee!!!') As if the stuffed animals weren't enough of a delight, this was the sight from all angles - the CN tower watching over us in the distance. I love the CN tower. I love how it changes the whole of the Toronto skyline! Inside one of the large exhibition centres were some sand sculptures. The meticulous nature of these blew my mind. I can't imagine ever being able to create something so wonderful out of anything, never mind sand! I loved this one of a man watching time. It is so wistful in it's nature and I love these open ended types of art that leave you with more questions than answers! After wandering around and looking at some of the stalls (and also after having purchase some delicious smelling lavendar sachets for my drawers and to add to my tumble drying and some red velvet fudge for my lovely Luke, who is quite partial), we watched some of the acts. I am unsure if readers have been keeping up with the news coverage regarding the CNE, but there have been 150 cases of food poisoning from the food market, which was isolated to the 'cronut' burger stand. We sat right next to it to eat our dinner, but thankfully our tummies are feeling healthy as ever! Finally, we inspected the agricultural area. I loved the alpacas and really loved that their wool was on sale. 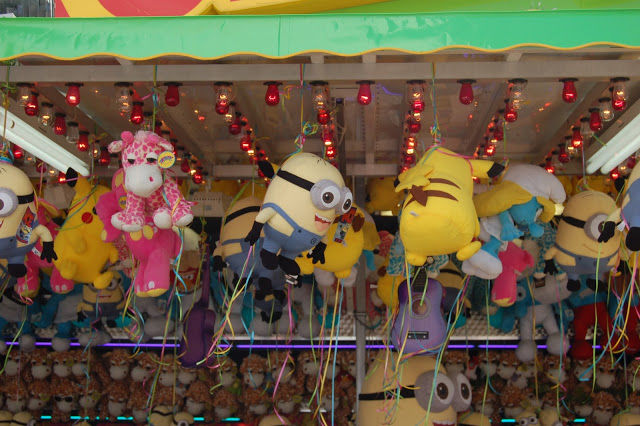 Luke and I decided to go down to Lake Shore, Toronto. Every time we go past there it looks so nice and yuppy with people blading or cycling. We are the least yuppy people in the World so we wanted to sample a bit of it! It wasn't actually anything like what we thought it would be. For a start it was breathtakingly beautiful. Lake Ontario stretches forever as blue and vast as an ocean, but still and peaceful as a bath. The sandy beach stretches along the lake and along the city forever. We sat down on a bench on the sand to eat a take out burger and soaked in the sun for a long time. It was like being on holiday with all of the families milling on the beach and the lovers lying on the pier in the distance. There is such a resort feel to it all. 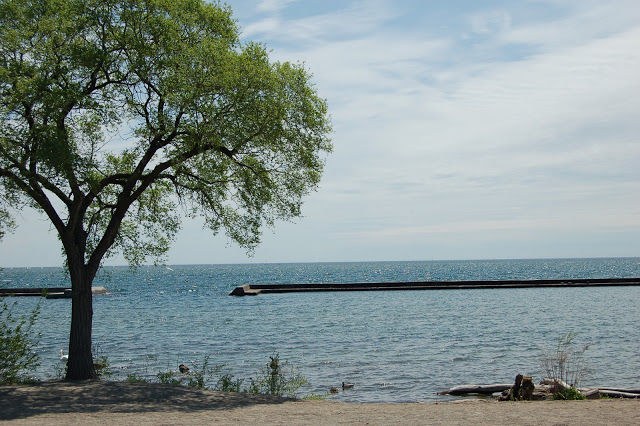 Our first stop was The Eaton Centre. Shopping in Canada is still new to me, I don't go to malls very much, so I enjoyed going just as much as Kim - although neither of us bought much! I just like seeing what I could buy if I had the money and inclination! We walked every single floor, trying things on and being silly! We got pizza and watched the Olympic hockey on a big screen TV. The Eaton Centre is huge and has every kind of shop you could want (except Dollarama - my favourite store), whilst I was not exactly the last of the big spenders, I did make a few small purchases in Abercrombie and Fitch (in a sale) - Kim's favourite American store that I had not yet been introduced to! The other thing I liked was that there is a Topshop opposite The Eaton Centre with prices still written on in £'s. I felt right at home and it did make me realise just how confusing I find money and the value of money here. All in all, if you like shopping, it is definitely worth the trip but be prepared to spend hours in there! 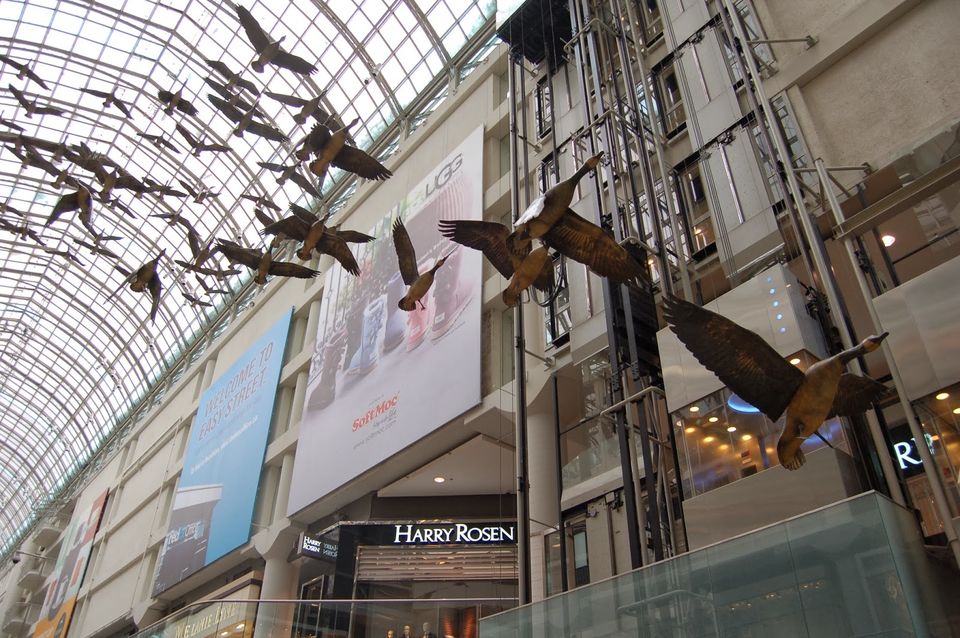 From The Eaton Center, it is only a stone's throw to Chinatown. Chinatown is a buzzing little area of Toronto filled with Chinese writing on the walls, wafts of Chinese foods coming from Chinese food vendors either in restaurants and stores or, in the summer, from Chinese street vendors. The stores sell cheap tourist merchandise, but hidden amongst the more commercial stores, you might find a gem, such as the store Kim bought a Chinese wall hanging from. Kim has a degree in fine art and she has a keen eye for things such as these. The other thing I love about Chinatown is that you will see things you never normally see, mostly exotic foods. I am not sure I would ever eat any of these things, but they are definitely interesting to look at! 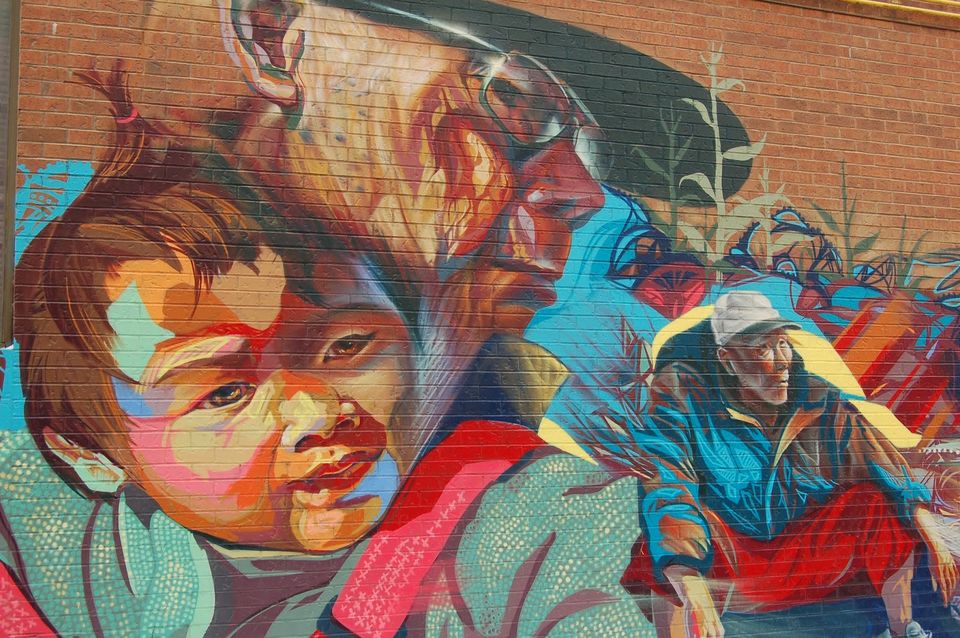 This is one of the only parts of Toronto (aside from Lakeshore) that I actually prefer in the summer. Simply because in the summer, Kensington Market is a bright, vibrant place that spills out into the streets with astonishingly cheap and marvelous vintage clothes. In the winter, however, many vendor's wares were, for the most part, safely stowed behind innocuous doors that seem formidable. I hate entering little shops without knowing what is in them because I always feel obliged to purchase something, where as when items are on display more accessibly, it is much easier to browse. I also hate that sales clerks here are always so ready to help you and follow you around stores, informing you of deals etc. I find it so intimidating. Aside from that mini-rant, it is so worth going to Kensington Market, even in winter the bright colours of the houses and stores brighten life up a little bit. There are so many bargains to be found too. Along the colourful street, I spotted the prettiest blue house. I could live there. If it weren't in the city of course! 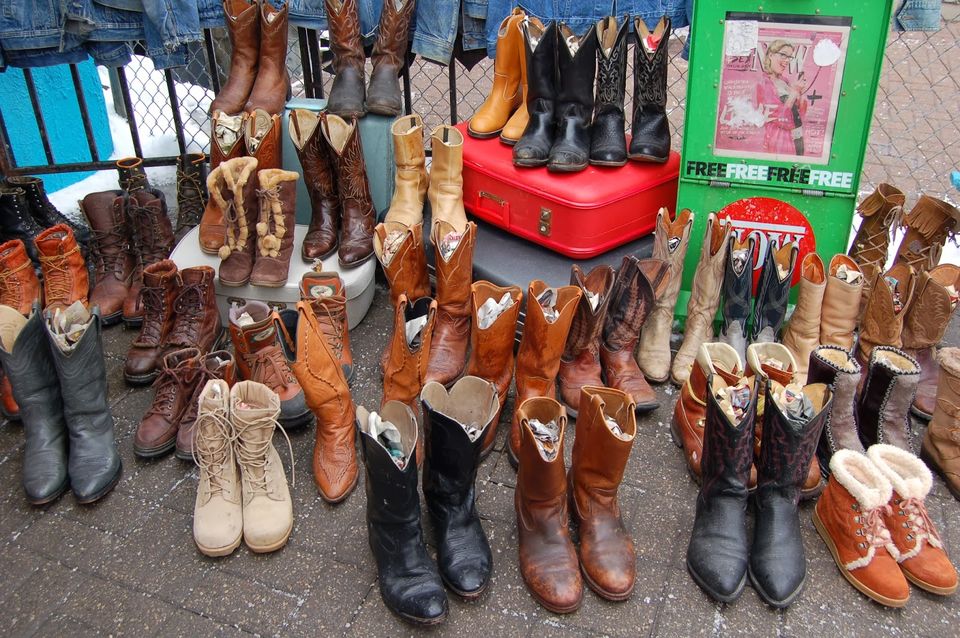 The CN Tower is arguably the most iconic landmark in Toronto, if not Ontario! In fact, in 1995, the CN Tower was listed as one of the seven modern wonders of the world. I do hate how many 'Wonders of the World' lists there are. They confuse me. If you are confused, read more here. Also listed on the 7 modern wonders of the world are: Itaipu Dam, the Golden Gate Bridge, the Panama Canal, the Chunnel under the English Channel, the North Sea Protection Works off the European coast, and the Empire State Building. The CN Tower was finished in 1975, is used as a broadcasting station and measures at 553.33 metres. I think they are the three main facts! Now for why it is appealing to me. Firstly, I love the way it dominates the Toronto skyline, by day or by night! nce at the top, the view of Toronto is literally breathtaking. Literally. This is another area that viewing Toronto in the winter beats viewing in the summer. In the summer, all you see from the top of the tower is the city. A stunning view of the city and you can perhaps see for further, but it is still just the city (this is entirely subjective, however), but in the winter the ice makes pretty patterns on Lake Ontario and everything is covered in snow. I have so hated the snow that I had forgotten that I actually once liked it! There is also the 360° restaurant. It is rather pricey, but it isn't so bad if you do what Kim and I did and buy a piece of cake for $10 and share it (there is plenty for two people) and a drink each. Many people simply order drinks and sit looking at Toronto with them, so you won't be alone if you don't order something larger on the menu. It was wonderful to sit and look at the shadow cast by the CN Tower, trying to work out whereabouts on the shadow we were sitting and marveling at how far it spreads a roast here stop. The city!!! 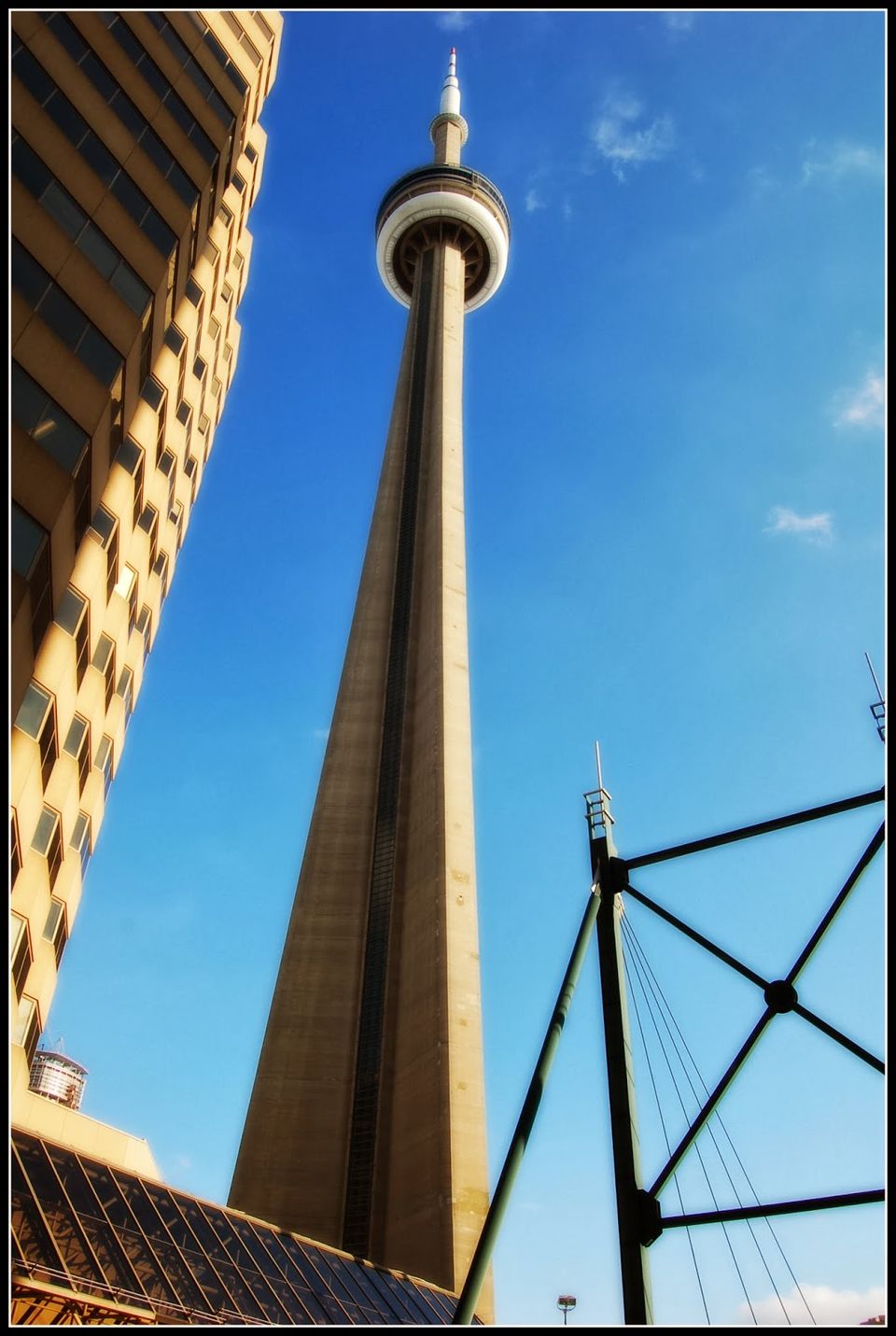 I waited for so long for this to open! And then I waited for so long to visit, but finally I have! The Ripleys Aquarium of Canada, in Toronto, finally opened and it was so fantastic, I honestly wanted to love it, but I am not so sure I did. I would welcome opinions on this! The Ripleys Aquarium is a valuable tool to provide sensory understanding and knowledge to children and adults worldwide about the oceans of our World. The information and the feeling of being in the ocean is so worthwhile. In addition to the knowledge and understanding provided to the public, the Ripleys Aquarium has a fantastic understanding of conservation, they are so wonderful at helping to clean up the shores of Canada, and it is nice to feel like you are part of that. 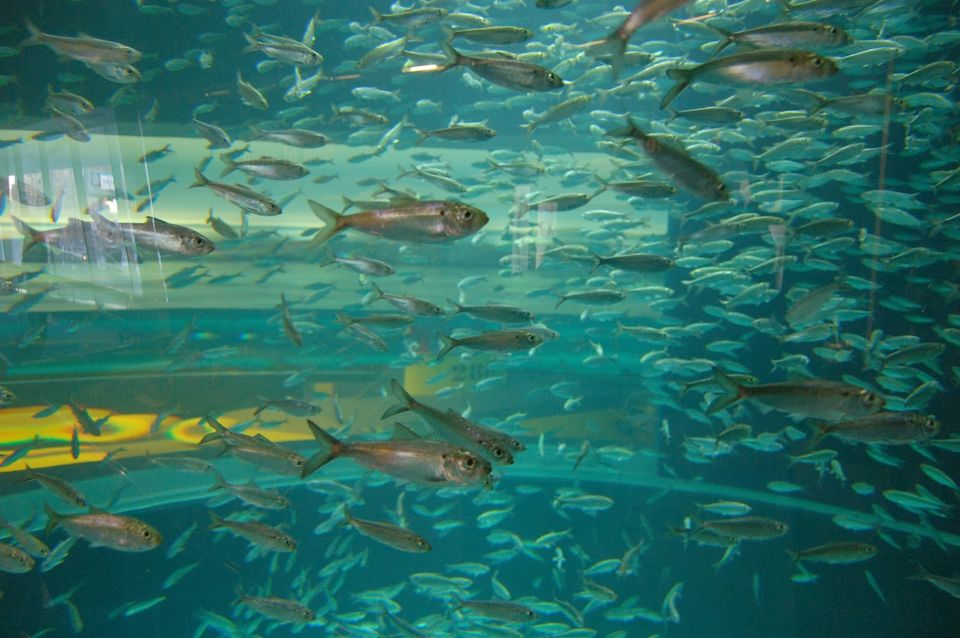