Riding Across The Border: Croatia & Herzegovina

I figured there would be no problem getting into Croatia.
Right away, the agent was asking quite a few more question, but no big deal. He took my passport, registration, and insurance/greencard and started entering something into his computer.
“We’ve got a problem,” (…fuck…what could be the problem?!) “This computer is old and slow” (WHEW!)
So I sat there for about 20 minutes, playing with a couple stray dogs while waiting for them to finish processing everything. And the whole time I was staring at the hillside…my first glimpse of Croatia…a massive landfill.

My first day in Croatia was November 1st, All Saints Day. Every cemetery I passed was filled with people bringing flowers and candles to the graves of family members. It was definitely an interesting sight.

One of the first cities I rode through was Vukovar, and I immediately came upon the water tower. It was heavily damaged in a battle in the early 90s, in which ~2000 people were killed. It’s been preserved as a memorial (a very grim one) of this battle. There were a few other large structures I noticed with very heavy damage, along with many buildings that were still riddled with bullet holes. On my first day, I also visited two WWII memorials. The first was the Monument to the Revolution of the people of Moslavina, built in 1967 to honor the people of Moslavina that fought in WWII. The second was the Stone Flower, in memory of the victims of the Jasenovac Concentration Camp. This was the only concentration camp that wasn’t run by the Germans, and was also one of the largest across Europe. It was started by the Ustaše in 1941, and the primary victims were Serbs. It’s estimated that 80-100,000 people were killed at this camp. 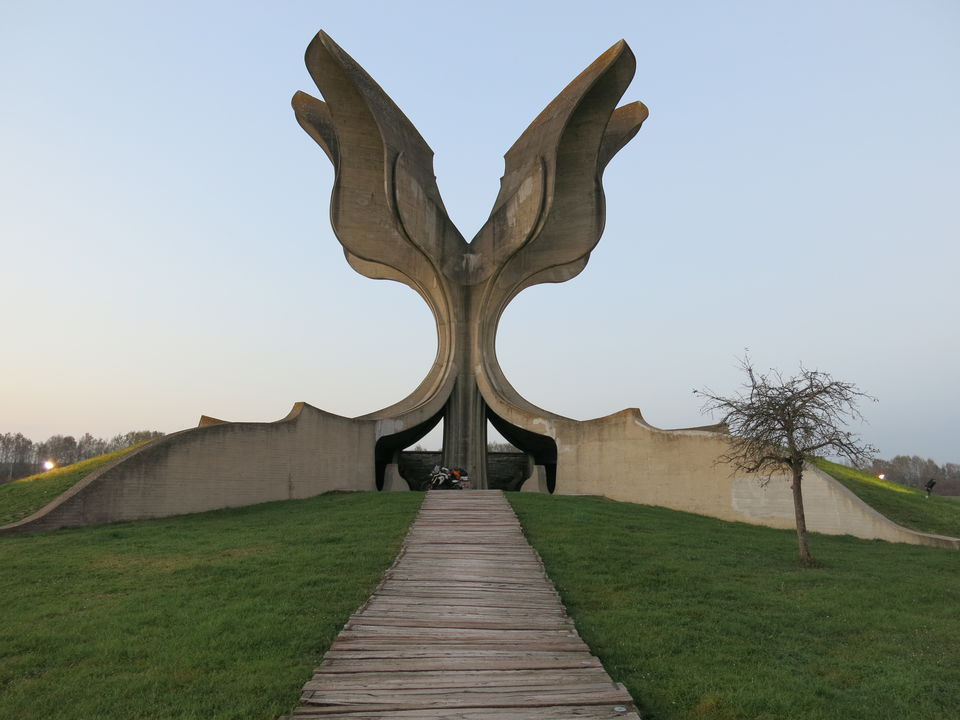 Here is another old abandoned monument that I went to on my second day…this one is far creepier than the others. Probably because it was much more than just a monument, and it was also very much abandoned. On the grounds in front if it, there was what used to be a food court and a big courtyard…It felt like there should’ve been loads of people up there, enjoying the day, but now it’s slowly becoming overgrown, and it was completely empty. It was built in 1982, as a memorial to the people of Kordun and Banovina (two regions in Croatia) and their resistance to the fascist regime. Until recently, despite being ignored, it was more intact. But lately, people have been stripping away the exterior to use as building material. As I walked up towards it, all I could hear was my boots squeaking (they’re super annoying), and one loose piece of siding clanking against another in the breeze. This didn’t make it feel any less eerie. The door to enter it was closed and locked up, but the exposed beams made for easy climbing. I went on top of the first level, but didn’t continue. Maybe it was because climbing isn’t too convenient in all my motorcycle gear, maybe it was because I was worried that a zombie might pop out and grab me at any moment. I’m not sure if this site has ever been used in a post apocalyptic movie…but if it hasn’t, Hollywood is really making a mistake. 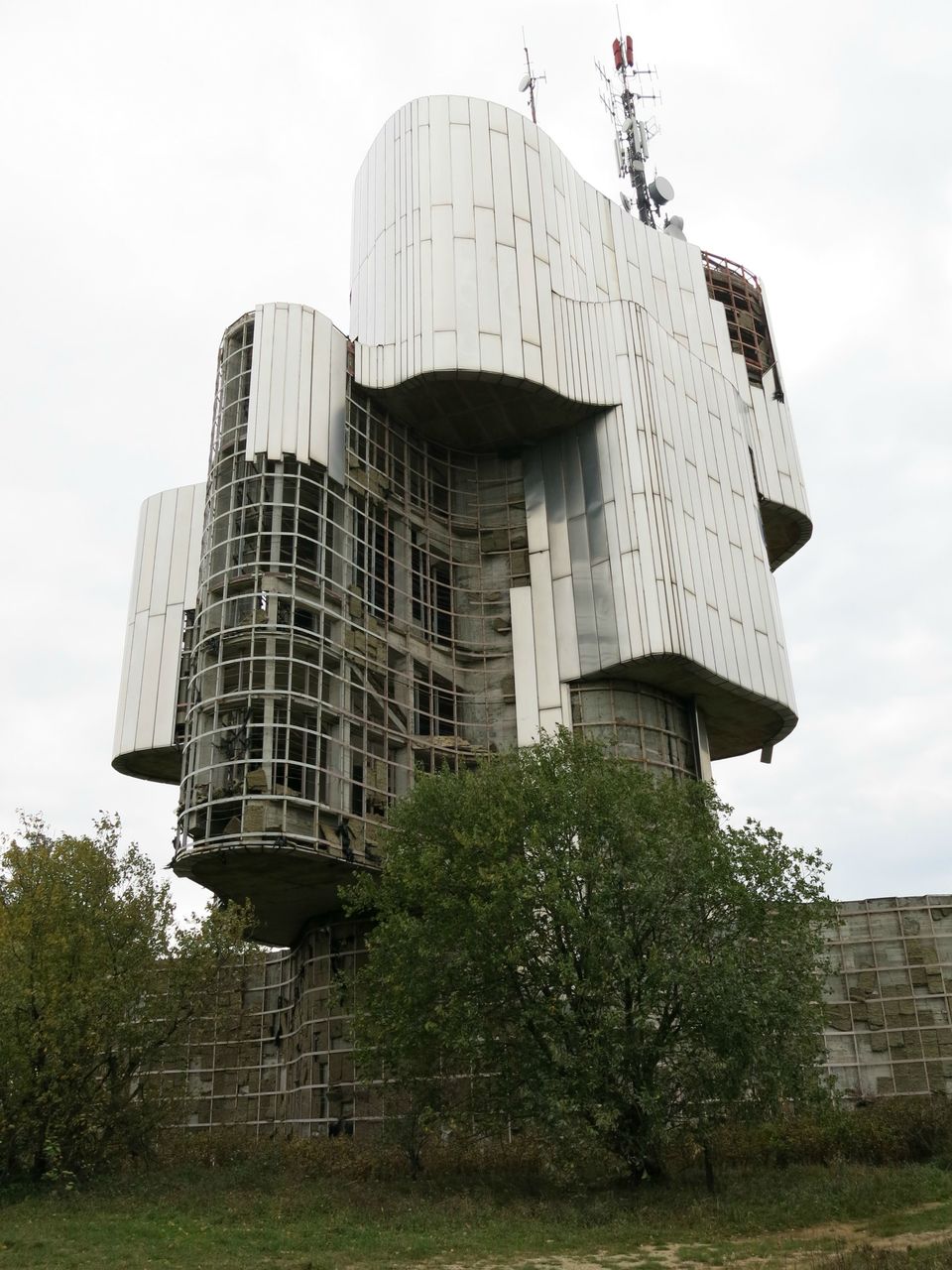 I took a very long, but great route getting here. First I passed through Plitvice Lakes National Park. Next, I rode over Mali Alan pass. Earlier, in the morning, it was raining a tiny bit, so I was happy to see that it stopped by the time I started up the pass. I’d just have to deal with a little fog at the top. The road surface wasn’t too bad…some occasional loose gravel and ruts, but nothing serious, and there hadn’t been enough rain to make it muddy. Coming down the south side was a little more nerve wracking. Less than fifty feet of visibility and hairpins with no warnings or guardrails made for some very slow riding.After getting down from the pass, I was about 30km from my destination, but decided to backtrack to get some riding in along the coast…wise choice. The view was amazing, the road surface was surprisingly good, and the riding was excellent. I rode from Senj to Zadar…any motorcyclists out there that want a nice route, keep this one in mind. So, now I’m in Zadar…it’s a nice little city with some Roman ruins to see in the old town…very interesting. Right on the water were two cool features. The first was the sea organs, which are large tubes underneath marble steps leading to the waterfront. As waves pass over the tubes underneath these steps, they emit different sounds. And the second shows up after sunset…the Greeting to the Sun. This large disk has LEDs of various colors that light up in crazy patterns, and all the while, you can hear the sea organs in the background…just add mushrooms and you’ve got yourself a party! 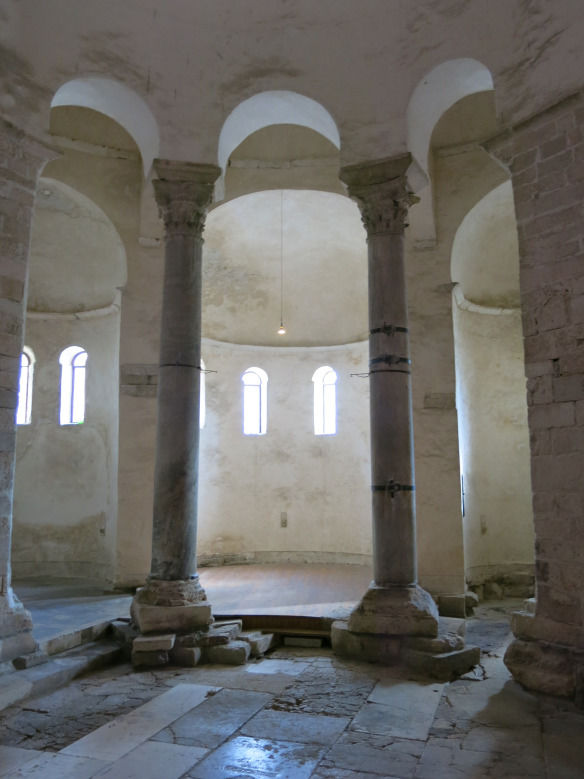 It rained on and off, sometimes pretty heavily, but luckily, it wasn’t when I rode up Sveti Jure, the second highest peak in Croatia. It’s in a National Park, and as I got to the entrance, there was a sign that said it was closed. But there were two gates, both opened, which I’m pretty sure means it’s not quite closed… It was a short, but very steep ride, from sea level to 1762m, which meant lots of switchbacks. 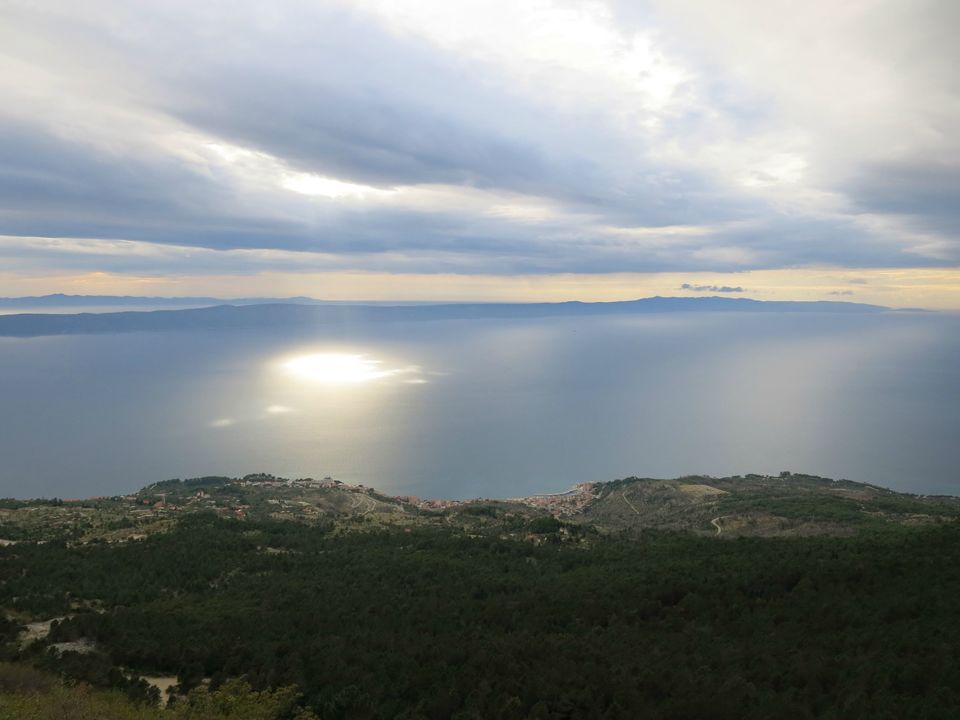 Crossing into Bosnia and Herzegovina the next day brought on a drastic change. Mosques started showing up in villages instead of just churches, cars from the 90s were traded for cars from the 70s, houses were far more utilitarian…but there were still plenty of stray dogs. I arrived in Mostar (unofficial capital of Herzegovina) and had plenty of the day left to see a bit of the city. In 1992, the Serbian Orthodox church (in eastern Mostar) was destroyed. Today, they are just now starting to rebuild the church.The ruins of the original church are still at the site. They were able to retrieve the church bells from the rubble, which will be used again in the new church. 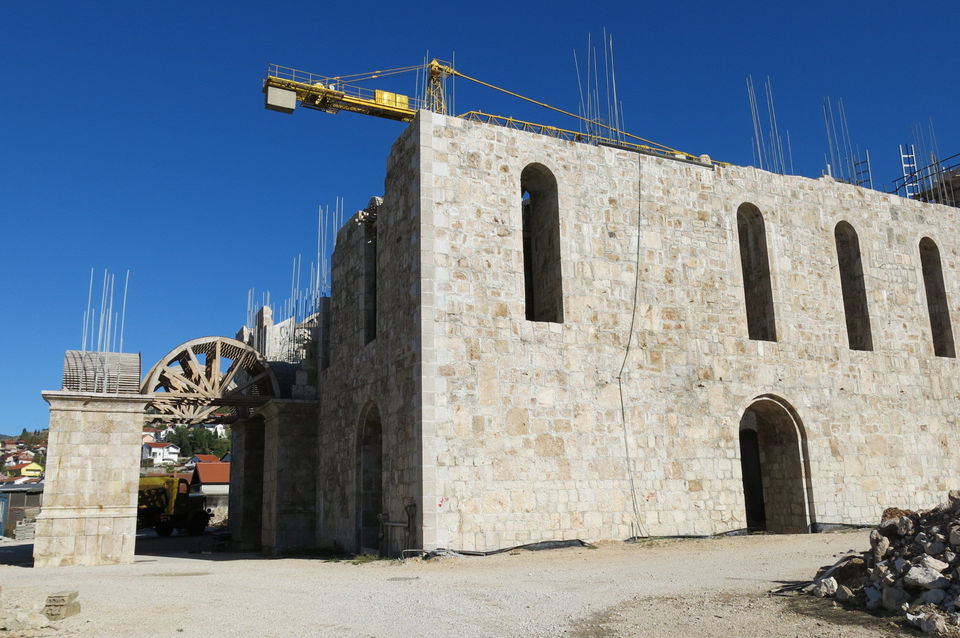 Originally a park in the middle of Mostar, this is now a cemetery where resistance soldiers were buried. During the war, the city was completely surrounded, so they couldn’t get to their actual cemeteries to bury the dead. Originally, they planned on this being a temporary burial location, and after the war, they’d move the bodies to the proper cemeteries, based on religion. But after the war, the families all agreed that rather than move the bodies to Catholic, Muslim, or Orthodox cemeteries, they’d keep them here. They were all Bosnians, so they agreed there was no reason to separate them because of religious differences. Some bodies have been moved to the cemetery more recently, as the location of the victims was not always known. In 2007, 20km from Mostar, they found a grave where a group had been executed, by 2008 they had finished DNA testing to identify the bodies and gave them a proper burial. So some headstones have four dates: birth, death, exhumed from mass grave, proper burial. 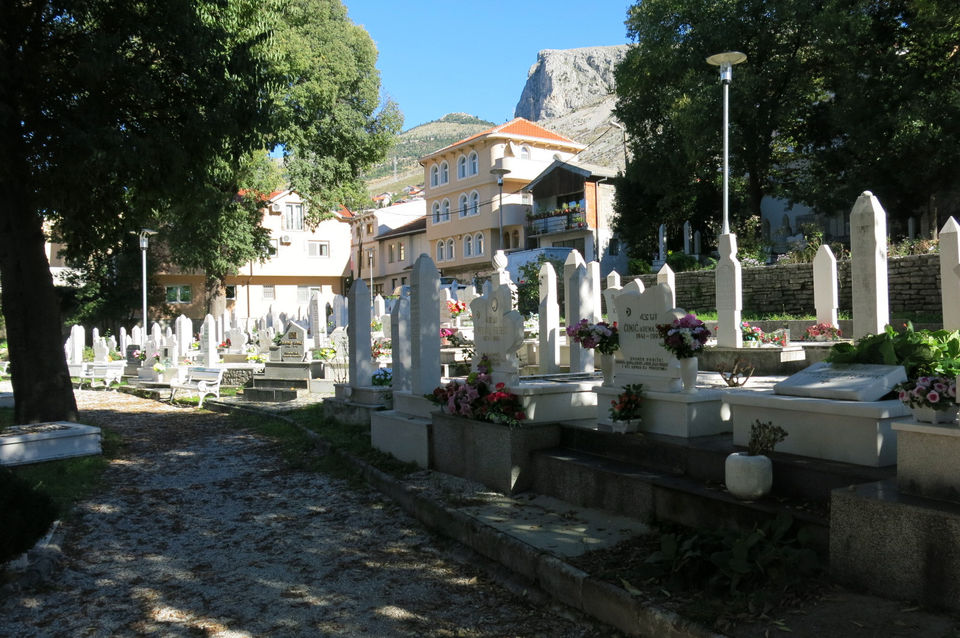 The old bridge in Mostar is the icon that the town is most known for. On November 9, 1993, it was destroyed by artillery fire. Žika was hiding out with friends near the side of the river and watched as it was destroyed. In 1997, reconstruction of the bridge started, and it was finished in 2004. Pieces of the original old bridge were removed and set on the bank as a reminder of what happened. The original old bridge was built by the Ottomans in the 16th century. It was the only passage across the Neretva river in the area, so historically was a very important trade route. The bridge keepers, who both protected it and collected fees for crossing it, were called Mostari, which is where Mostar got it’s name. The bridge is not just an attraction by itself…it’s also well known because of the locals that jump from it. Its a bit of a right of passage to manhood for the local Bosnians to jump from it. They also keep a record of all foreigners who jump from it, and I’m comfortable with the fact that my name will not be entered in that book. It’s a 25 meter drop, there have been numerous injuries from jumping, and even some deaths…no thanks… 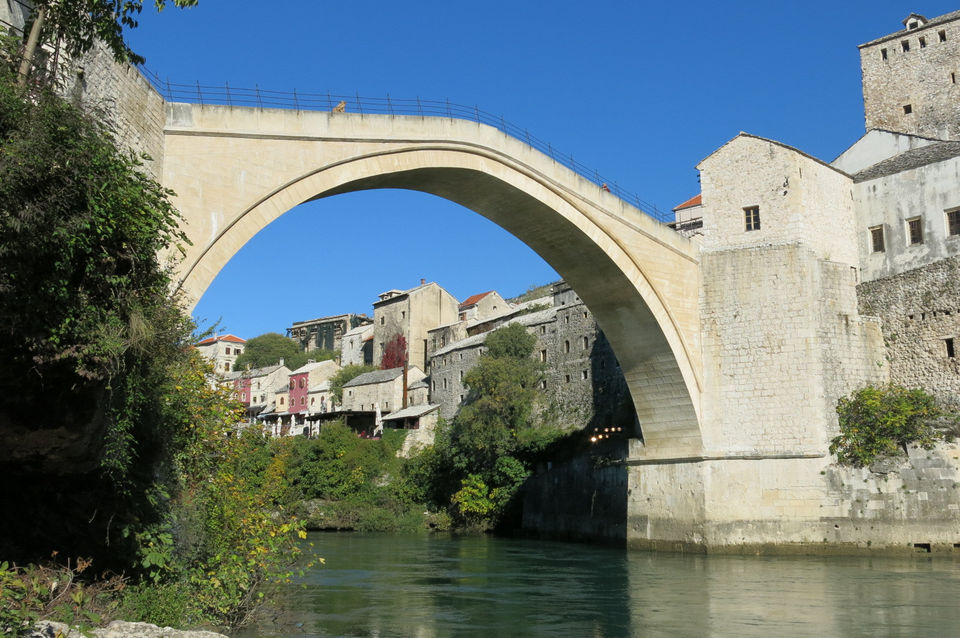