Only 4 days to explore Jaiselmer. Feel royal in the royal state- Rajasthan.

We reached Jaiselmer in evening. Our first place was Sam dunes desert camp,Jaisalmer. So we decided to stay a night in camps.
Since , it was 6:00pm we decided to stay at Shiv Tara desert camp. It was a great welcome by them.
At 7:30pm they started their traditional dance  and music program  which was so awesome. And was welcomed by their traditional song. Later,They made us dance.  It was a great experience. We enjoyed a lot with the lovely people.

Beautiful lady on the floor 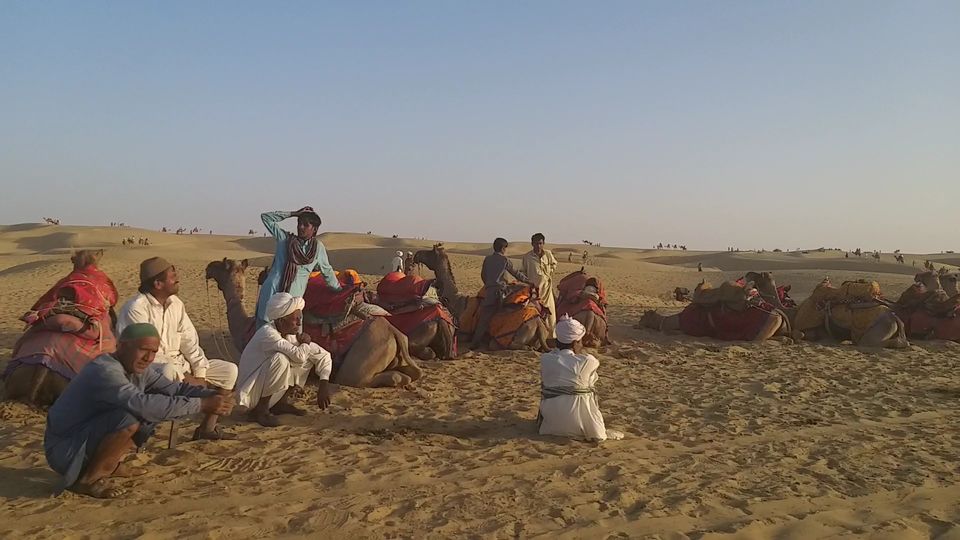 In the morning we had a breakfast. After that we went for a desert safari. First we took a ride on camel which so much of fun. Later, we hired a safari jeep and went to experience the golden sand desert. The whole desert was of golden colour, so Jaiselmer is called "The Golden City Of Rajasthan".
After the desert safari, we went to explore small village named Kuldhara "The haunted Place". Kuldhara is said to be Haunted place because in an era of powerful kings and ministers, about 200 years ago, Kuldhara was home to the Paliwal Brahmins. It was during this time that Salim Singh, the Diwan of Jaisalmer, known for his debauchery and unscrupulous tax-collecting methods, set his eyes on the beautiful daughter of the village chief. The Diwan was absolutely hell bent on having the girl and he told the villagers if they came in his way he would levy huge taxes on them.
Fearing the wrath of the Diwan, the residents of the entire village fled one dark night, leaving behind their homes and everything within them. Kuldhara was abandoned by its very own people. No one saw the thousand-odd members of the village leave. For generations now, no one knows where the Paliwals have resettled. All that is known is they cursed the town when they left – that no one would ever be able to settle down in Kuldhara again. So from that day no one has settled in village.

Day 3, we reached Jaiselmer city. We had a stay in  lalgarh hotel which was so royal type. The hotel name was itself from the Lalgarh fort.
Later we explore The Lalgarh Fort which was so beautiful and amazing. And the best thing, it is believed to be one of the very few (perhaps the only) "living forts" in the world, as nearly one fourth of the old city's population still resides within the fort.
After in evening  that we visited Gadisar lake. It was a beautiful view and wonderful climate.
This lake was built in order to satisfy the water needs of the people of Jaisalmer during the reign of Maharaja Rawal Jaisal.
Gadisar lake  has been an integral part of Jaisalmer since time can comprehend. The lake is beautiful and is surrounded by nature. This place is a perfect getaway location and its serenity is why it is well known for. This lake is one location that’ll heal you and give you such memories that you’ll remember forever. Not only is this lake of immense importance to the locals but is also one of the most visited places by tourists.
Later we again went to the fort for the night view from the top of the fort which was so amazing.
After we went to our hotel, we had a candle light dinner in the beautiful lalgarh hotel.

Next Day in the morning we went to explore patwa Haveli. One of the best Haveli I have ever seen. The Patwon Ji ki Haveli is an interesting piece of Architecture and is the most important among the havelis in Jaisalmer. This is precisely because of two things, first that it was the first haveli erected in Jaisalmer and second, that it is not a single haveli but a cluster of 5 small havelis. The first among these havelis was commissioned and constructed in the year 1805 by Guman Chand Patwa and is the biggest and the most ostentatious. It is believed that Patwa was a rich man and was a renowned trader of his time. He could afford and thus ordered the construction of separate stories for each of his 5 sons. These were completed in the span of 50 years. All five houses were constructed in the first 60 years of the 19th century.

The havelis are also known as the 'mansion of brocade merchants'. This name has been given probably because the family dealt in threads of gold and silver used in embroidering dresses. However, there are theories, which claim that these traders made considerable amount of money in Opium smuggling and Money-lending.

This is the largest Haveli in Jaisalmer and stands in a narrow lane. This haveli is presently occupied by the government, which uses it for various purposes. The office of the Archeological Survey of India and State art and craft department is situated in the haveli itself.

Nevertheless, even after these encroachments and abuse you can find a good amount of paintings and mirror-works on the wall. The other important aspects are its gateways and arches. You will notice individual depictions and theme on each and every arch. Although the whole building is made yellow sandstone, the main gateway of the Patwon Ji ki Haveli is in brown color.
After that we went for lunch and we returned to our place.