Road Trip to the City of Coffee - Chikmagalur

The trip happened in September this year, planned by 6 but finally executed by 4. Yes! As it generally happens, a plan made by “n” members is rarely performed by all the “n” together. So, me along with 3 college friends made this weekend getaway happen to the City of Coffee in Karnataka - Chikmagalur. It was chosen for its favorable climate and exploring the mountain ranges.

Reached Chikmagalur by noon, checked-into our hotel, dropped the luggage, had lunch and left for the long awaited expedition. The first spot was Hebbe Falls. It is about 10 km away from Kemmangundi, the famous hill station in Karnataka. Now, the waterfalls were inside a coffee estate and can be reached either by walk or four-wheeler. We wanted to take our car to the falls but were not allowed to, the people in-charge said, "the path is dangerous to drive on" and hence taking their Jeep for the same is advisable. We had no clue how the route would be until the thrilling ride began in their Vintage Marshall Jeep. It was scary more than thrilling, so basically, it was a very narrow lane fully swamped up with bumps, potholes and what not. And that is why only Jeeps are preferred (allowed) on it.

After the ride, there is a long walk in the jungle, through the coffee plantations, small ponds and an uneven rocky path that finally leads to the Hebbe Falls. Someone has rightly said, "Difficult roads often lead to beautiful destinations". 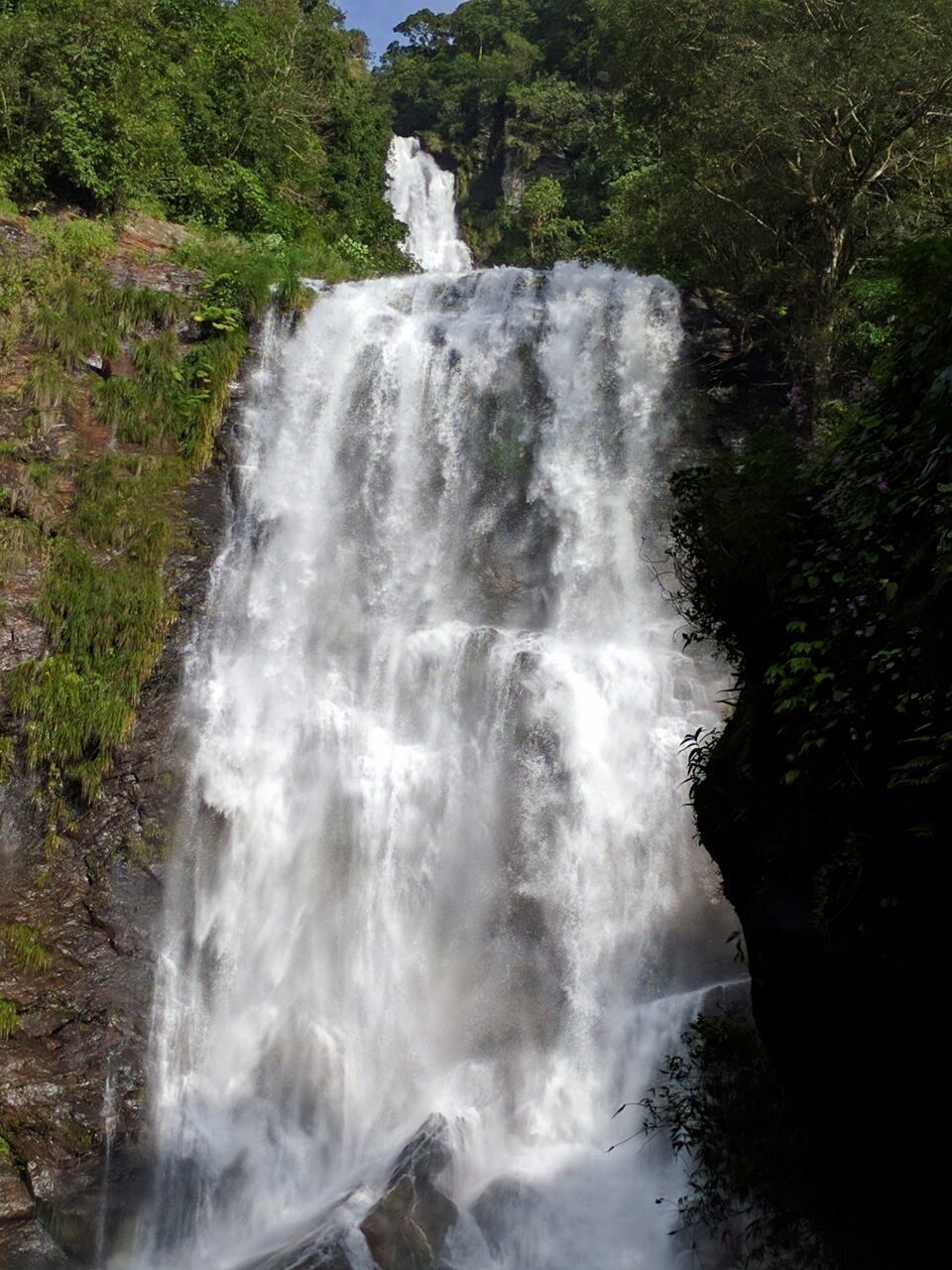 Me floating in the pond :) 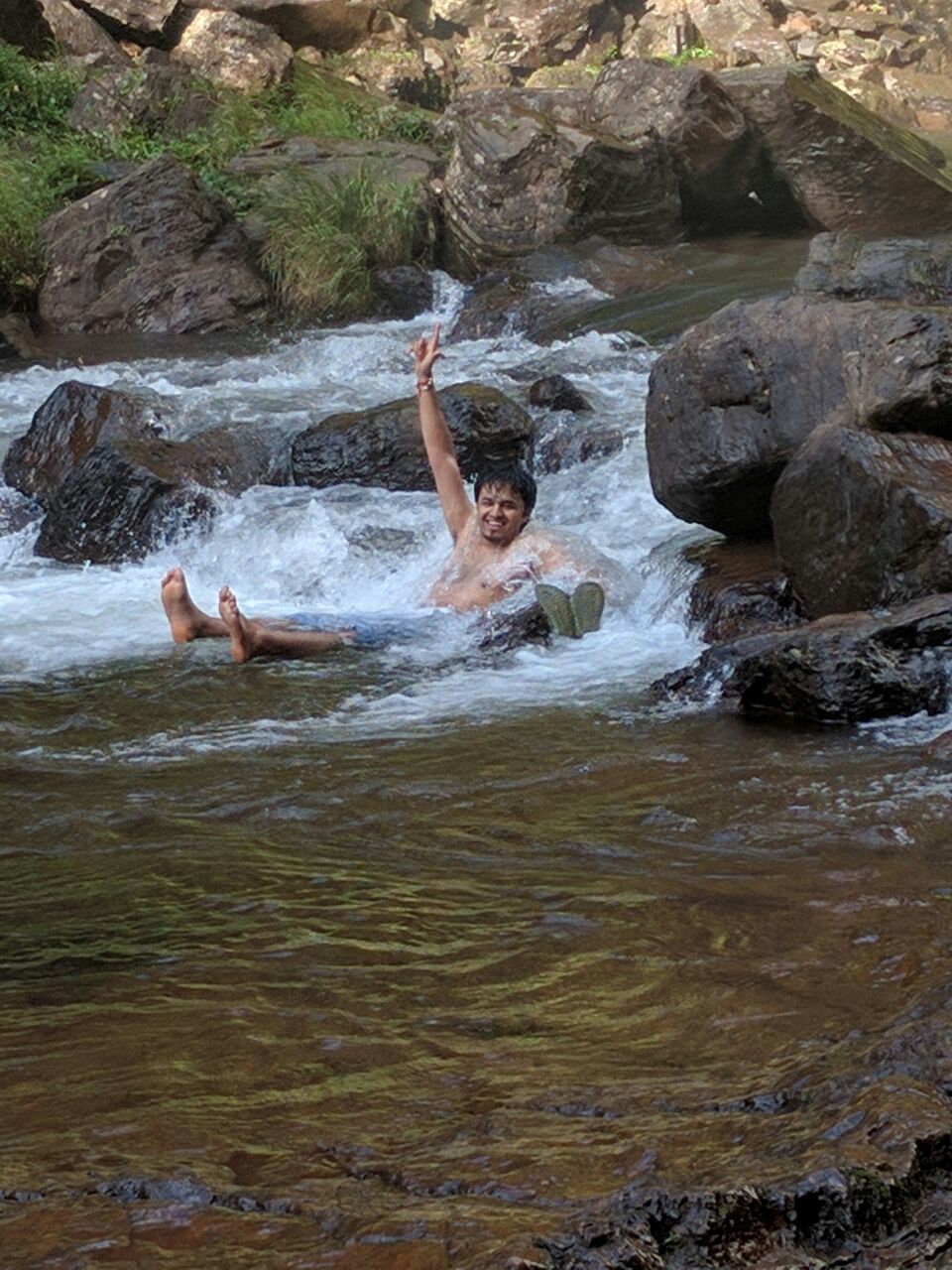 Steps to the peak 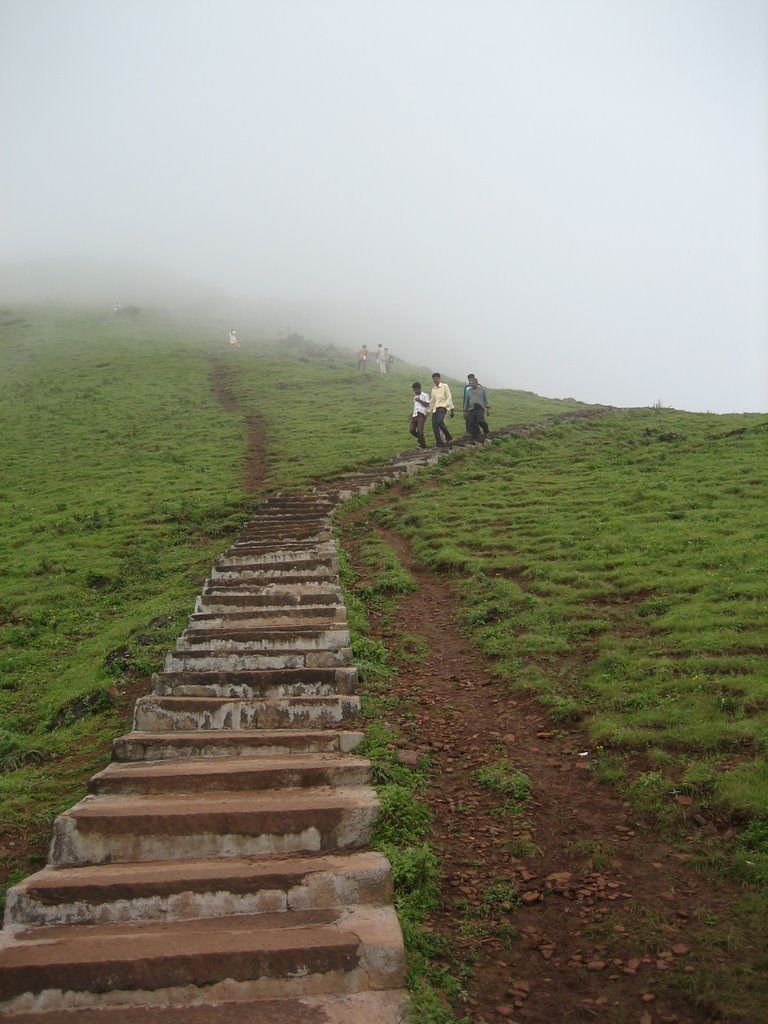 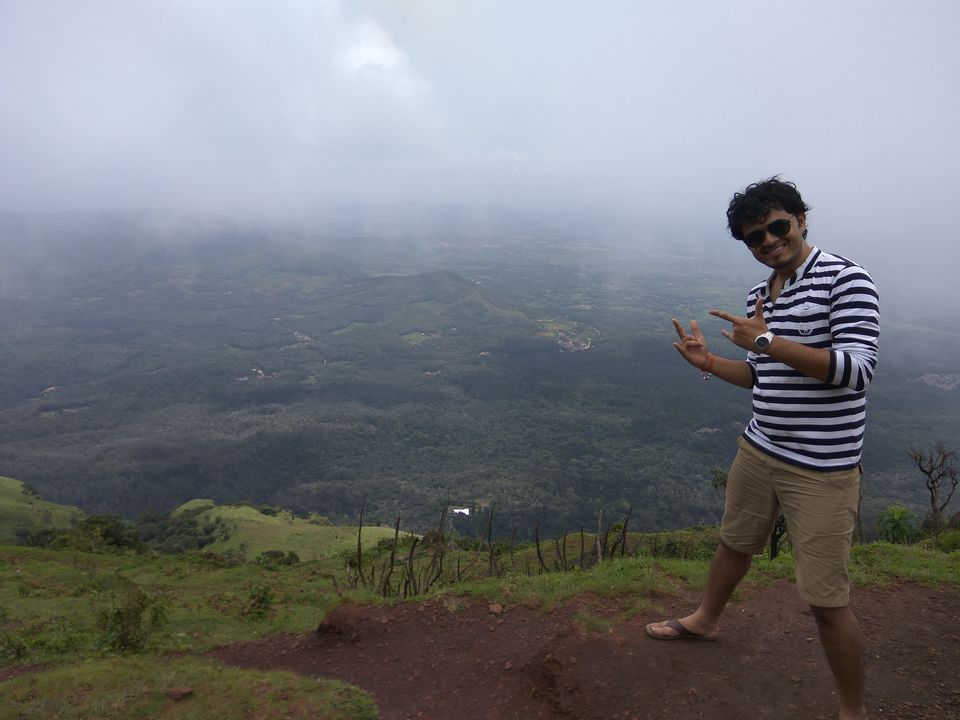 Caves near the temple 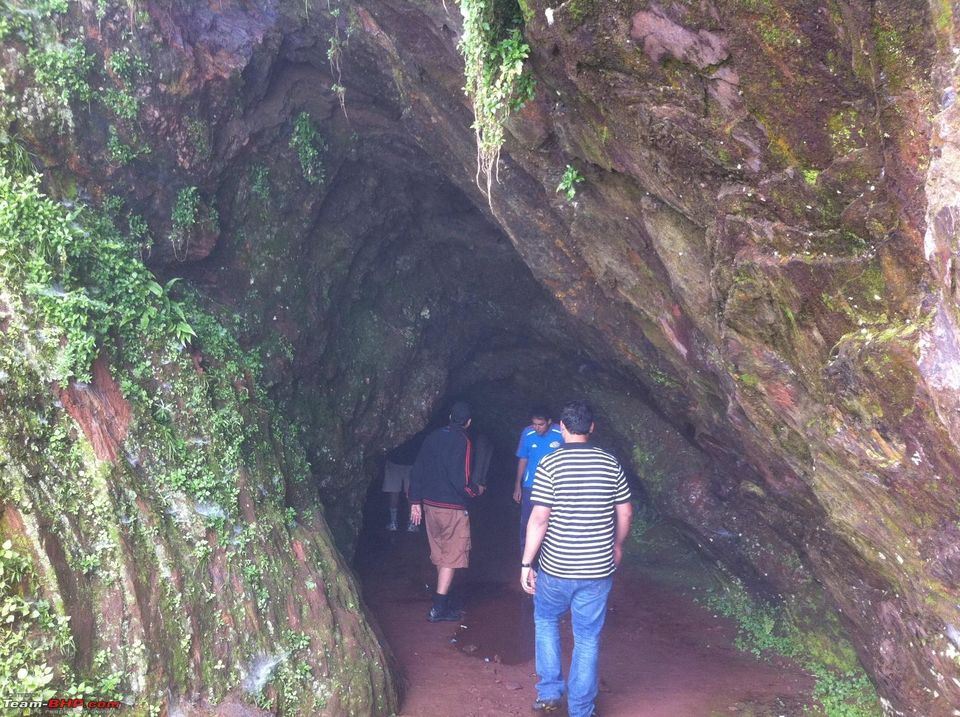 "Serene" is the word 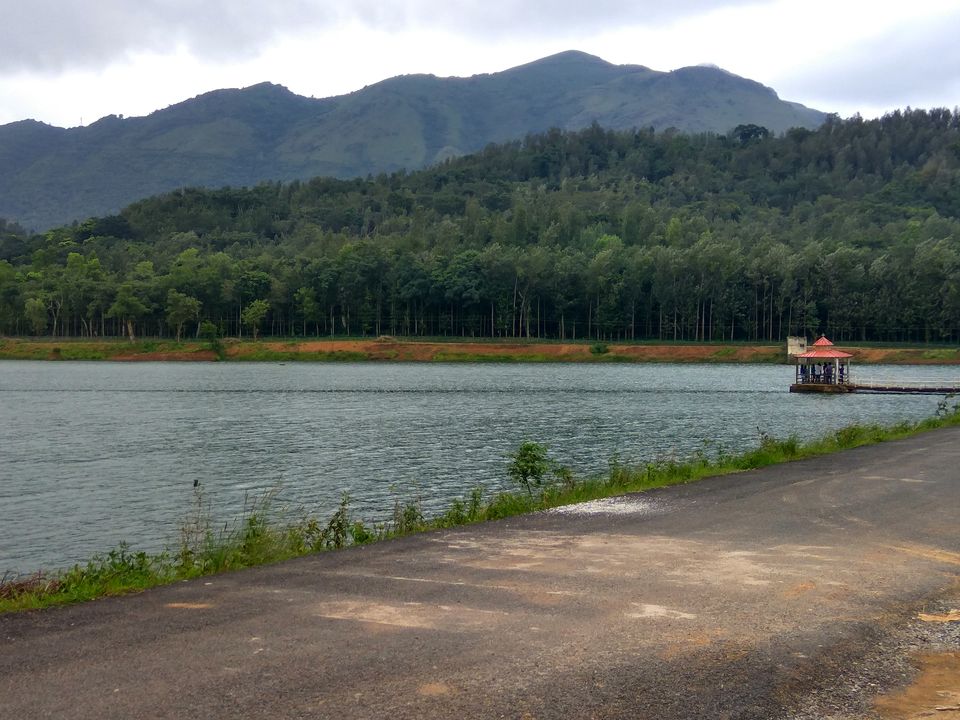 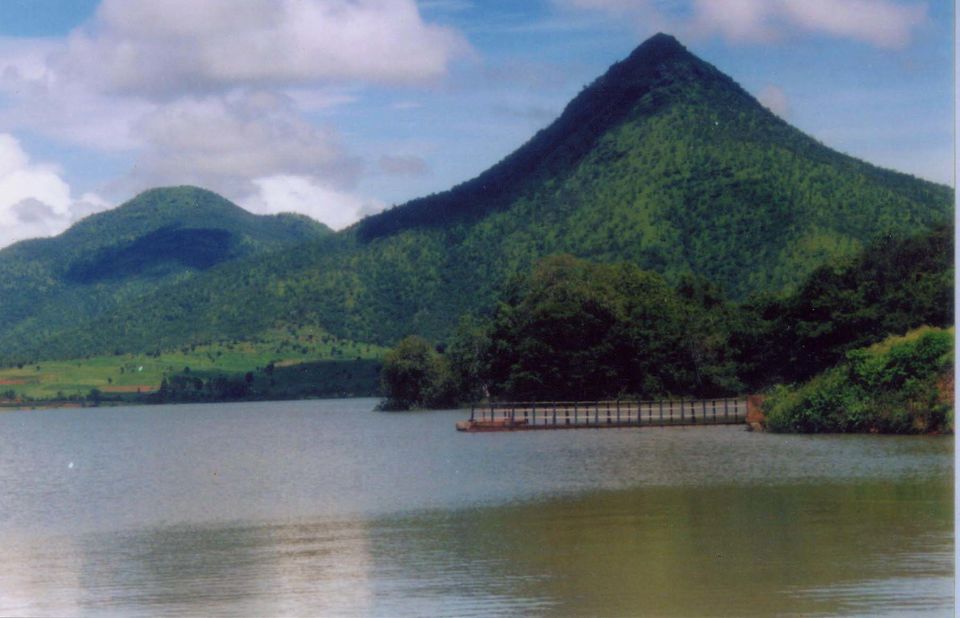 Cold water gushing down at you from hundreds of feet is such an amazing feeling. Under the splashes, immersed in a pond, we stuck around for an hour or so, relaxing in the cold water, disconnected from the world.

Then took the same adventurous ride back to the place where our car was parked. By the time we drove all the way down from the mountain ranges to the city it got dark and was time for dinner. After dinner, we came back to our hotel and slept.

Next Day, our first destination was Mullayangiri Peak, the highest peak in Karnataka. We left in the morning and started our ascend just after breakfast. It took us around an hour to reach, parked our car and then we had to climb a stretch of around 100 steps on the hilly region to reach the top.

The path was narrow and the weather was extremely windy making the walk uphill not just exciting but also spine-chilling at times (almost at all turns). The snowy view from the top was spectacular, the pictures explain it all.

The peak gets its name from a small temple located on it, which is dedicated to a Tapasvi - Mulappa Swamy, who is believed to have meditated at the caves (only a couple of feet below the summit). The caves are accessible and not very deep but the information about the deity remains ambiguous.

We spent a while and then came back down the steps to relish some "corn and tea" - perfect ingredients to energize your body on the hills.

On the way down from the peak 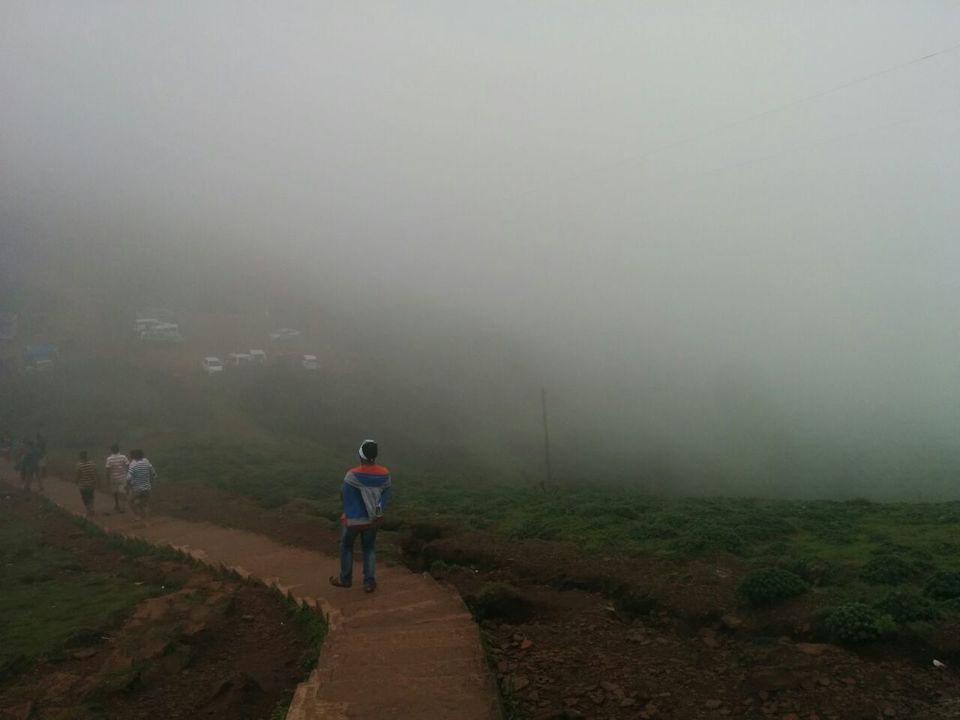 A rejuvenating snack break and then it was time for us to start the descend from the mountain ranges.

Reaching the city, our next location was Hirekolale Lake. It is a beautiful lake amidst beauty and surrounded by high mountains. The sight at the lake was extremely pleasing, the Sun was painting the trees with different shades of green.

Moving on, was time for lunch so we headed towards the city again (this time in search of a nice hotel) and found a famous chain of Maharaja Hotels, the long queue outside the hotel validated the brand and its craze. The mouth watering delicacies made us wait (patiently and eagerly) but it all seemed justified and worth the wait once the food was served. Fully enjoyed the meal and then moved back to our hotel, it was time to check-out and Bid Adieu to Chikmagalur. Aaaaannd! we hit the road back to Bangalore.

While departing from Chikmagalur 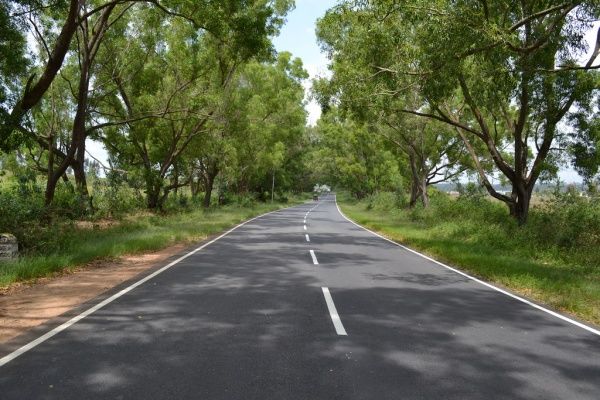 A very famous thought strikes me instantly, "Traveling" - It leaves you speechless, then turns you into a storyteller.