Paris - one of the most popular destinations in the World. The capital city of the mighty France, where you can’t possibly be bored. Even if you’re staying for a couple of days, you can’t miss the continuous flow and movement the city is so famous for. So much to see, do & experience, Paris is that kind of a city which deserves more than just a long weekend. Prepare yourselves, I’ll be talking about Paris and Paris only .:D I would like to start with the museums we visited, choosing Auguste Rodin’s impressive collection .

Auguste Rodin was one of the most controversial sculptors of the 19th century. “Rodin’s most original work departed from traditional themes of mythology and allegory, modeled the human body with realism, and celebrated individual character and physicality. The museum is not only worth visiting because of Rodin’s impressive collection, but also because of the beautiful garden that belongs to the property. With its picturesque hedges, pretty little lakes and green surroundings that mix perfectly with Rodin’s black sculptures, a walk in the garden is a must if you’re around!

The Orsay museum
The Orsay museum is housed in a former, XIXth century railway station, on the left bank of the Seine. In it you can find not only paintings, but sculptures, furniture and photography as well.  “It is probably best known for its extensive collection of impressionist and post-impressionist masterpieces (the largest in the world) by such painters such as Monet, Manet,Degas, Renoir, Cézanne, Seurat, Sisley, Gauguin and Van Gogh.” (my favorite part of the expo).

The Louvre. The most visited and probably the most famous Museum in the World. After exploring the  “museums” in Paris but I personally think that it was an awesome idea stepping out of the beaten path, and making time to visit city's business district , totally opposite to the “usual sights” of Paris. Gigantic buildings of glass and steel, groups of people in an unbelievable hurry is what characterizes the area. It is considered to be Europe’s largest purpose-built business district. Not only does it have 1500 businesses with over 150,000 employees and 2,600 hotel rooms, it also contains the largest shopping mall in continental Europe, the Quatre Temps. The Grand Arch (Grande Arche de la Défense) is a 20th century version of the Arc de Triomphe. It was open to the public until 2010, luckily we were there two years earlier, so we could get on top (and boy, the view was awesome!)

“King Louis XV vowed in 1744 that if he recovered from an illness he would replace the ruined church of Sainte-Geneviève with an edifice worthy of the patron saint of Paris.”He did recover, and that’s how this grandiose edifice was built under the architect Soufflot, completed by the start of the French Revolution.

The Invalids’ Dome
The Invalids’ Dome is a complex of buildings, made up of the French Army Museum, the Military Models Museum, the Contemporary History Museum and a burial site, which holds within itself the graves of notable French war heroes, like Napoleon (among many others). The building complex also houses a retirement home for old war veterans, and a medical and surgical center. If I remember correctly, we visited the Army Museum and the Dome to see Napoleon’s tomb. It was kind of funny seeing that huge tomb, when we knew that it is said that he was not such a tall man, but I guess they thought a great leader deserved a great resting place. Anyways, the Army Museum is quite interesting as well, totally worth a visit.

Arc de Triomphe.
It is located at the western end of  the  Champs-Élysées, so it even comes with an amazing view upon the world-famous shopping street. I climbed up the stairs while the sun was still up, and  actually got to see the sun set over Paris, and the lights lid up on every little street and building. I think it was an awesome experience, because I got to see how everything looks in both day and nighttime, so it was pretty unique. As I was admiring the beautiful Eiffel tower in complete darkness, suddenly some small blue lights started to flicker, and it kept going for quite a while. I was a bit surprised. I don’t really now how the Eiffel looks like at night nowadays, but back in 2008, it looked magnificent.After watching the light show , I hurried down from the arc to continue my journey among the Parisian streets. As I got down, I took a last glance at the majestic Arc de Triomphe, and decided it was a very good idea to climb all those stairs, because of the unequaled view it had to offer.

Our Lady of Paris

It is probably one of the most well-known churches in the World. Notre Dame de Paris is often reputed to be one of the most prominent examples of Gothic architecture in both France and in Europe as a whole, and the naturalism of its sculptures and stained glass are in contrast with earlier Romanesque architecture.”

I remember my disappointment, when I was standing in line to get on top of the Eiffel tower and the staff announced that it wasn’t possible to go to the top because of the strong wind that day. In my opinion, the Eiffel is the symbol of Paris, and I dreamed of conquering its top ever since I was a little kid. As I was standing in line, devastated of the news I took a few shots of Paris’s powerful symbol. I finally got into the elevator that  stopped at the first floor. Even though my original sadness was still present, I was also glad that I at least made it this far. As I  was walking around, looking through small souvenir shops, I noticed some people get into the elevator and go up. Our heart stopped when we found out that they were letting people up because the storm had calmed down a bit. I immediately purchased my ticket and with heart beating faster and faster I ascended to the top of the Eiffel tower. And what a view it had to offer! I’ll leave you with the photos so you can decide for yourselves, but I’ve gotta tell you: it took my breath away.When I decided to go down,I actually went by foot. I have a great fear of heights, but in order to defeat it, I needed to face it. So that I did, with shaking legs, but I can definitely say that it was worth it, because my fear of heights has decreased over the years, and the Eiffel was the place I started to defeat it.

Auguste Rodin was one of the most controversial sculptors of the 19th century. “Rodin’s most original work departed from traditional themes of mythology and allegory, modelled the human body with realism, and celebrated individual character and physicality.” He had an amazing eye for detail, as well as exceptional talent for bringing out the most realistic forms of his sculptures. He became world-famous by 1900, making him one of the most in-demand sculptors of his time. Not only did he make impressively realistic sculptures, but he also managed to express human emotions with them as well. One of his most well-known masterpieces has to be “The Thinker”. The museum can be visited all year-round, and there is no entrance fee for every first Sunday of every month. If you’re in Paris, I really recommend this lovely little museum, just to take a walk and take your mind off things. 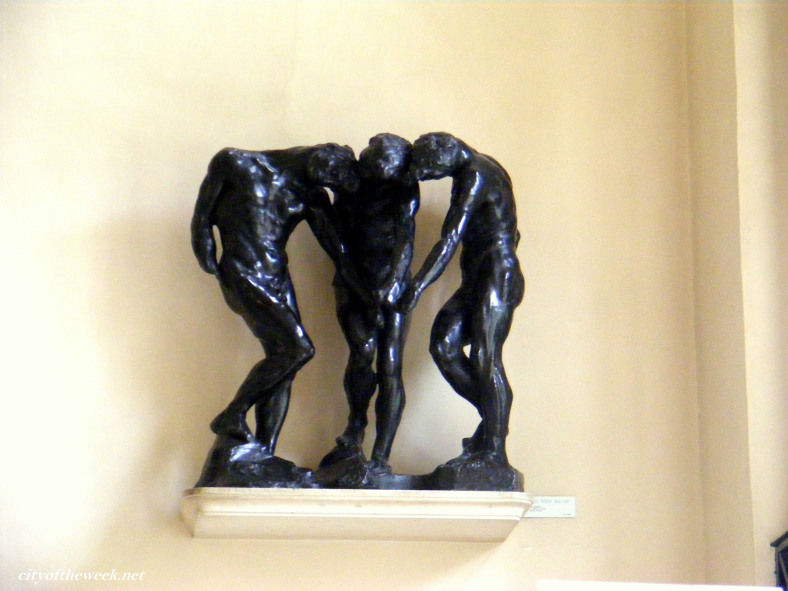 I remember when I stepped in I was actually awestruck by the beauty of the old railway station! I found the surroundings somewhat close to magical, and even as we were walking past the world-famous paintings and sculptures, I couldn’t help myself in taking a glance at the beautiful ceiling and the amazing railway clock.The sculptures magically came alive once you were walking among them and the beautiful scenery offered by the “vintage” railroad station. One of my favorites is Salvador Dali, but unfortunately his paintings were not among the collection of the Orsay. I did, however, get to see a few awesome artworks from such masters as Vincent van Gogh, Monet, Manet, Cezanne, etc. If you’d like to visit the museum, the entrance fee costs 9 euros. For info about opening hours and additional information, visit the museum’s site. 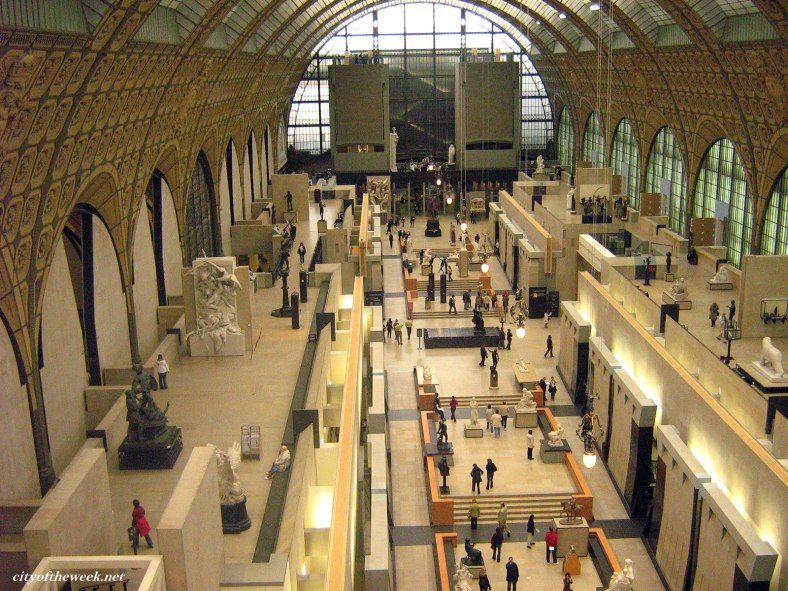 I don’t think it needs any special introduction. With an impressive collection of 35,000 artworks, if one would stand 30 seconds in front of every piece of art, it would take thirteen days (yes, all 24 hours of it) to see all of it, not taking into consideration the time it takes to walk from one to another. Yes, it’s that big.It was a dark, windy morning the day we stood in line to see this fabulous museum we’ve all heard so much of. Even though we were there before the opening hour, I think we still must have stood an hour waiting to get in. Yeah, it’s crowded, there’s always a huge line in front of it.It was a rainy day, a perfect day to visit a museum. At the entrance, we all got a map, and we circled everything we managed to see. Although the Orsay Museum remains my favorite museum in Paris, the Louvre has its own wonderful and beautifully decorated places and spaces as well. 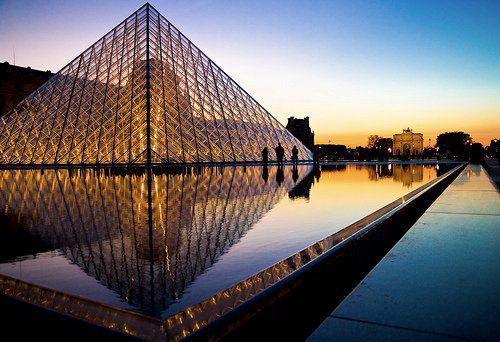 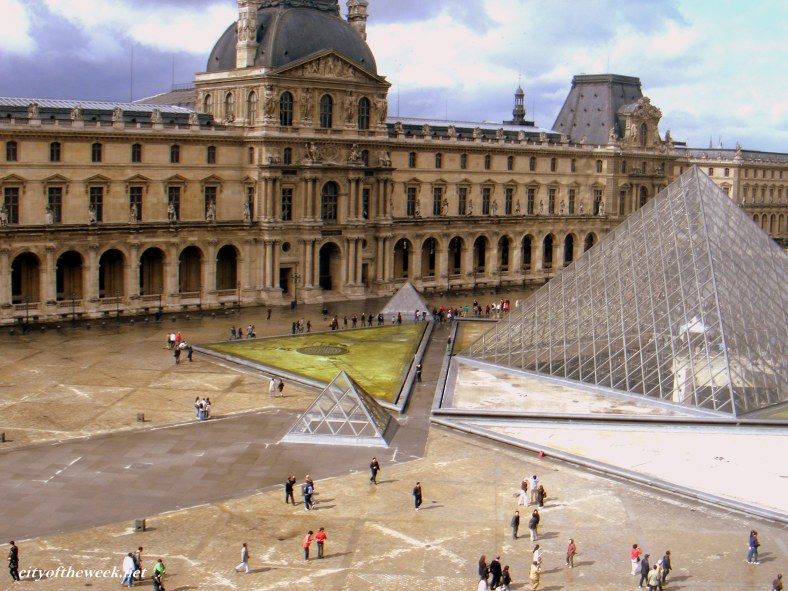 They changed it from being a church into a mausoleum for war heroes. “Twice since then it has reverted to being a church, only to become again a temple to the great intellectuals of France.”I also read that Rodin’s Thinker was housed here for a short period of time.I found it really weird that there was a huge pendulum present in the mausoleum. I didn’t know what it was and nobody there could tell me, so when I came home I had to google it. Turns out, a physicist (named Léon Foucault) wanted to demonstrate the rotation of the Earth with the help of an experiment with a pendulum (later named after him), which is actually 67 meters tall!There are a number of renown people buried in the mausoleum. Actually, the writing on the facade of the building actually means “To the great men, the grateful homeland”. We could saw Victor Hugo’s, Émile Zola‘s, Louis Braille‘s, Jean Monnet‘s, Marie Curie‘s and Alexandre Dumas‘s graves (among many other notable personas). 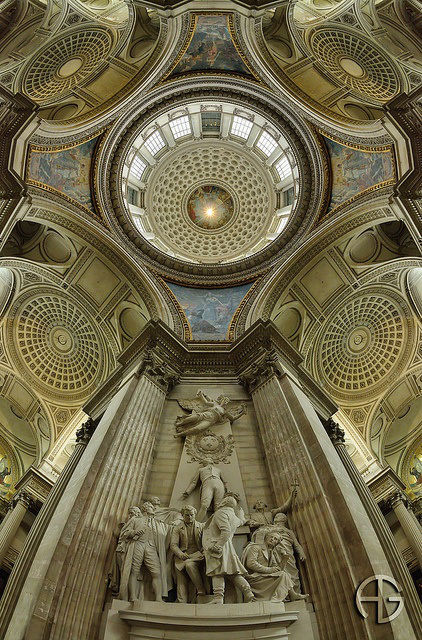 What I really liked while we were walking through the tomb were the painted glass windows. I really loved how detailed, yet seemingly simple they were. Also, there were not only just tombs and arms, but little scale-models and soldier-figures as well.And after wandering around for a while, we finally got to the créme-de-la-créme of the expo, Napoleon’s final resting place. Wikipedia says: “Napoleon was initially interred on Saint Helena, butKing Louis-Philippe arranged for his remains to be brought to France in 1840, an event known as le retour des cendres. Napoléon’s remains were first buried in the Chapelle Saint-Jérôme in the Invalides until his final resting place, a tomb made of red quartzite and resting on a green granite base, was finished in 1861.'' 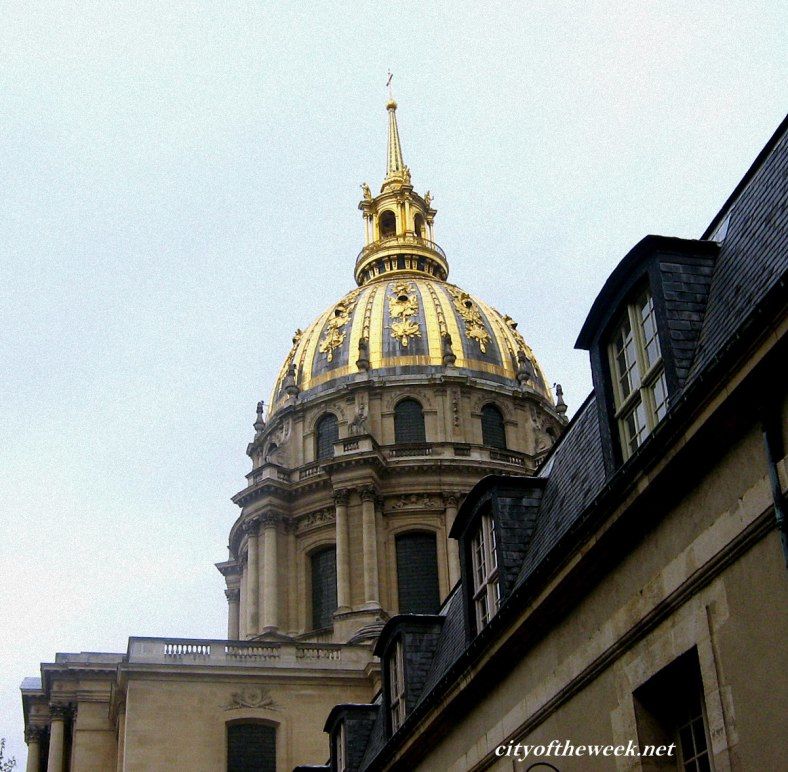 It is located at the western end of the Champs-Élysées, so it even comes with an amazing view upon the world-famous shopping street 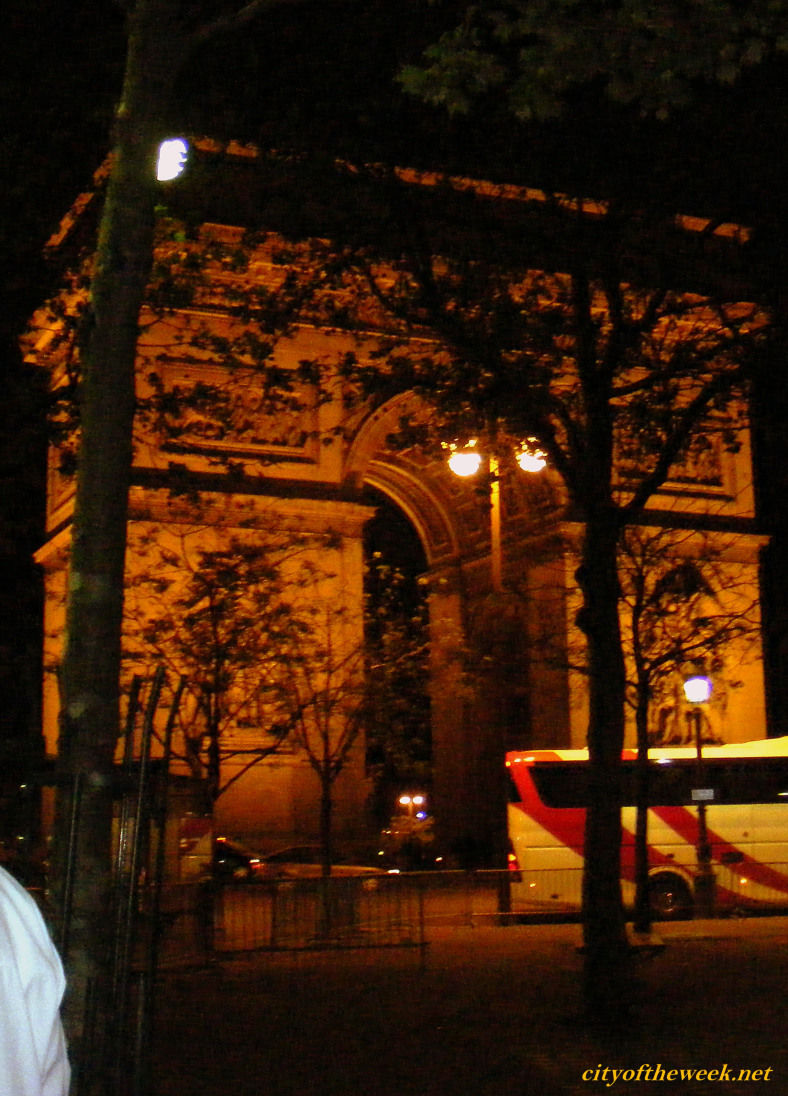 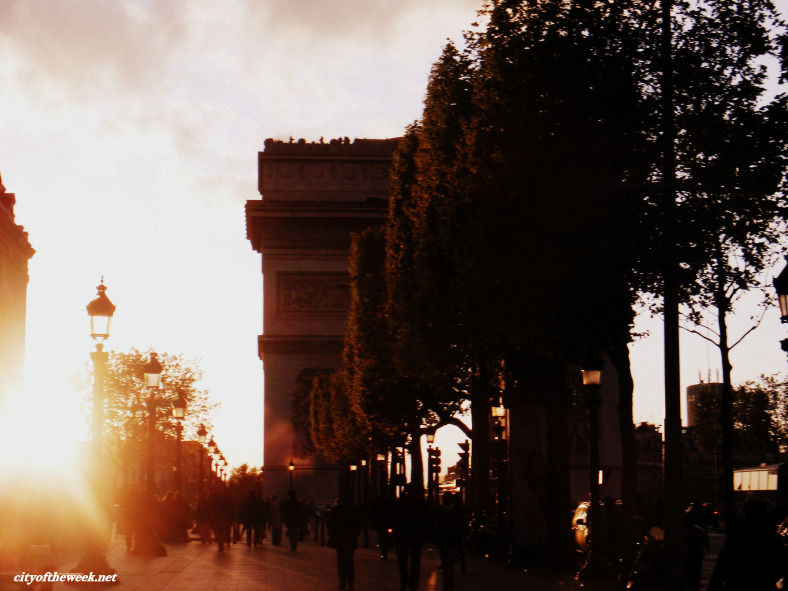 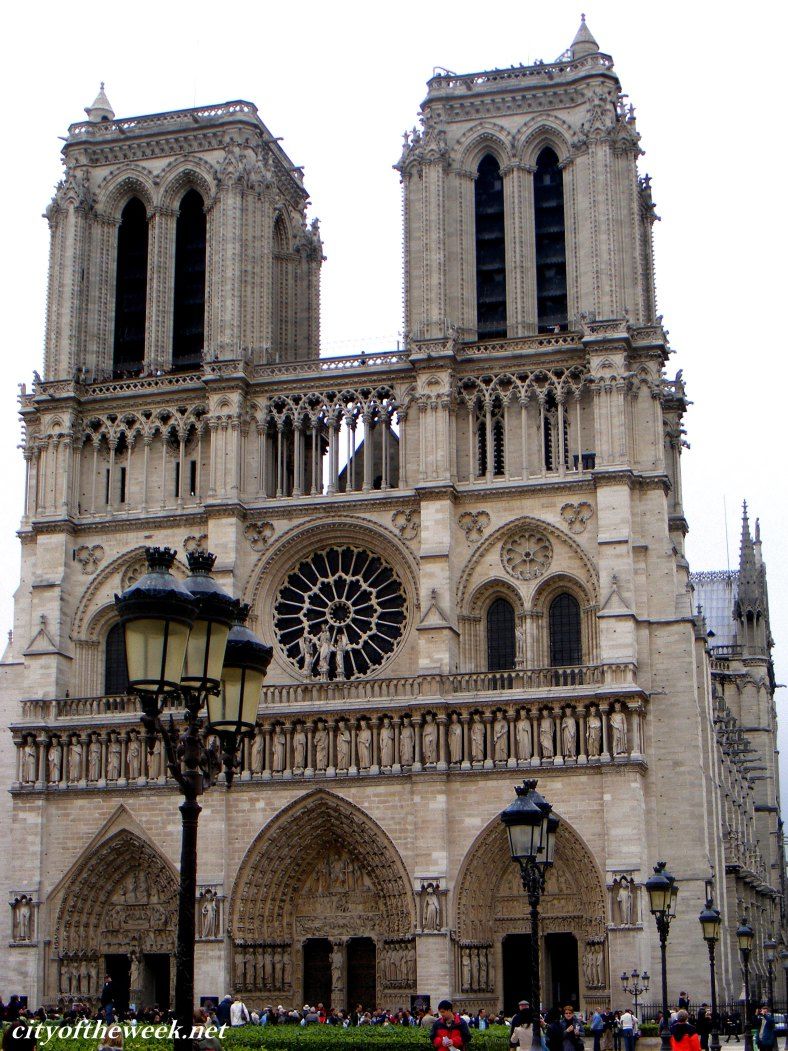 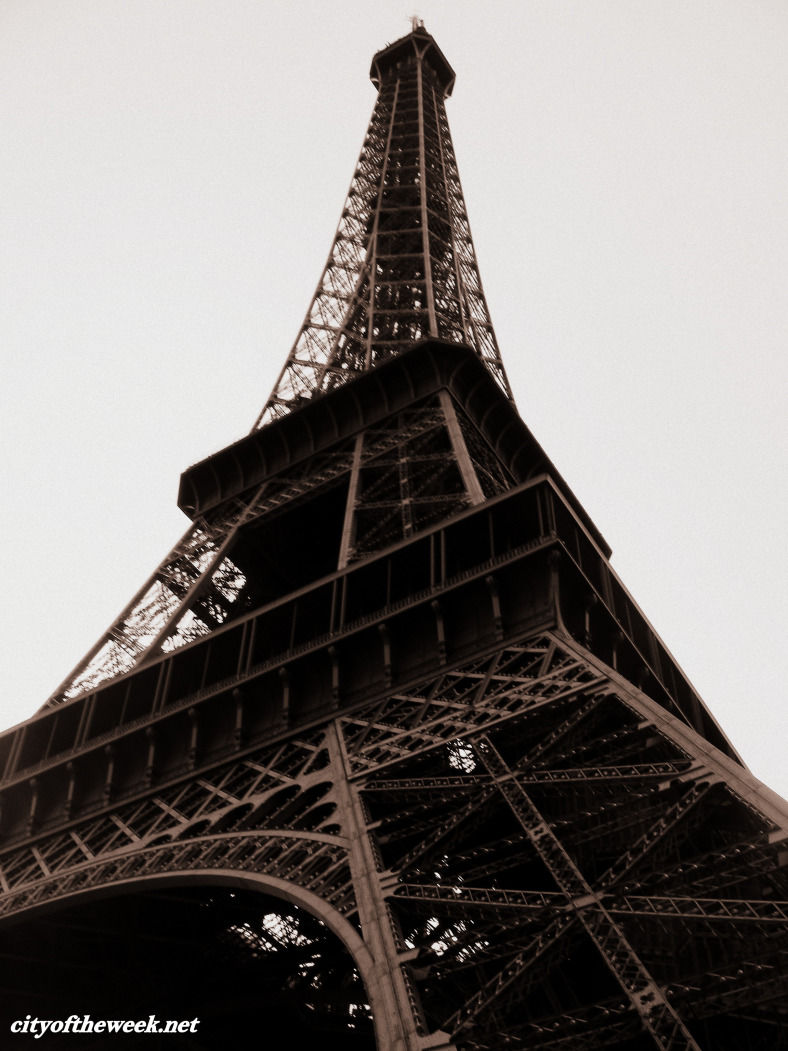 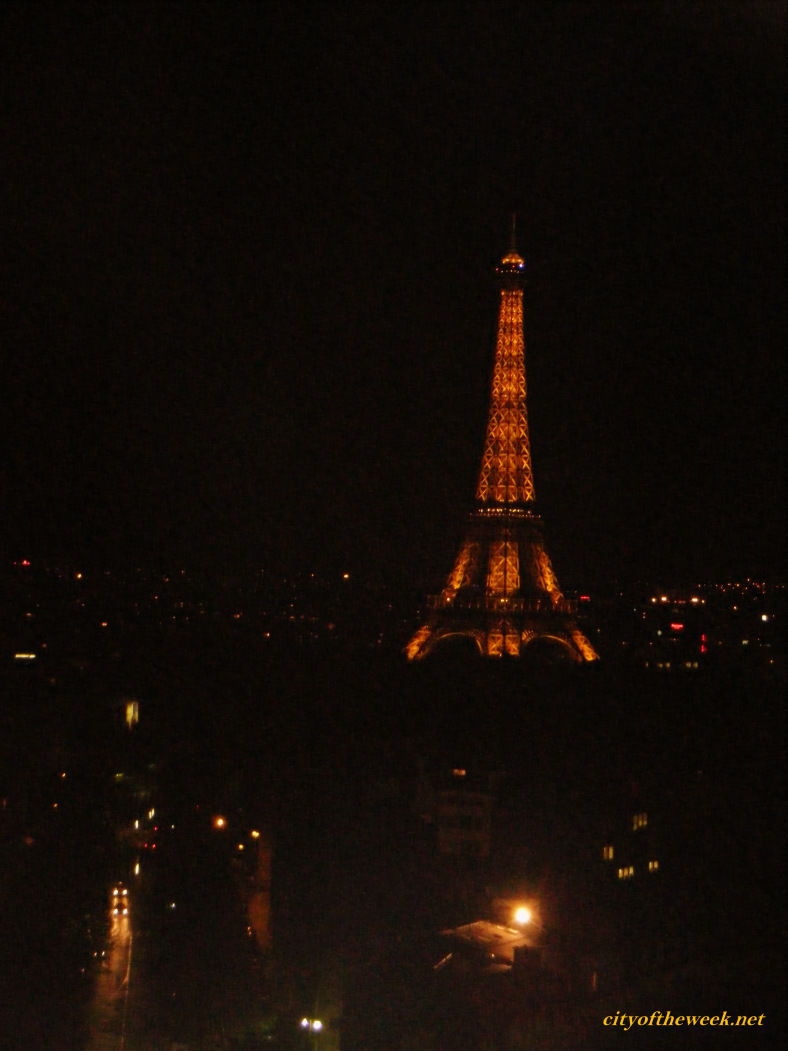