Long weekend at Venice of Rajasthan

Udaipur, fondly known as the City of Lakes, but for us this city is something more than that. We were anchored to the history of this city from the day we decided to go to there. The city is a photographer's paradise as every nook and corner of the city is just so picturesque. We are going to be sharing lots of photograph's in this blog, so don't forget to miss them.

Upaipur is the historical capital of Mewar named after the king named Maharana Udai Singh who belonged to the clan of Sisodia Rajput.

Udaipur is well connected through roads, train and airways. The Udaipur airport is 21km away from the main city. 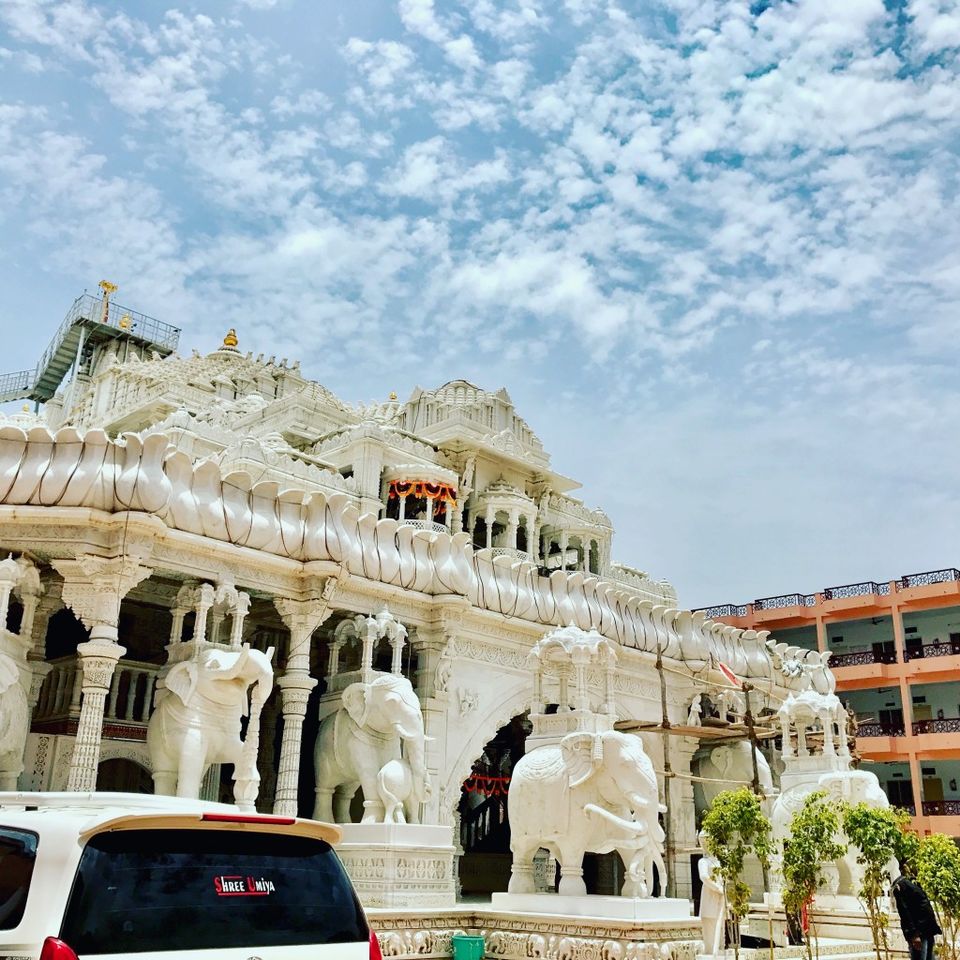 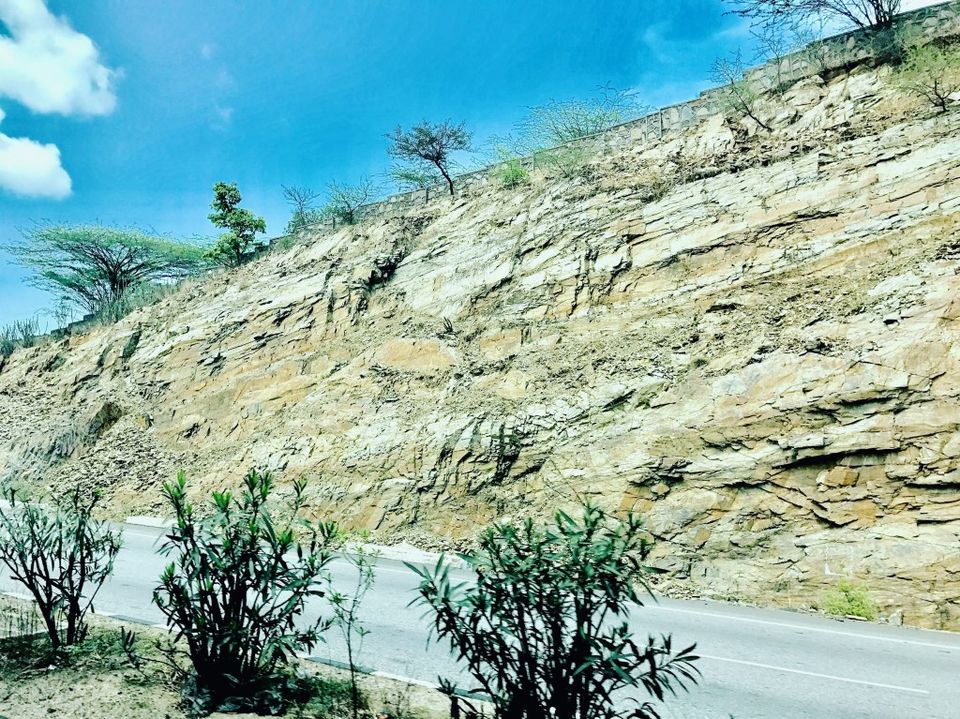 Places to visit in Udaipur

The ticket to City Palace is 300 per head and it would take around approx. 2.5 hours to cover the whole palace. Do hire a guide from the entrance of the palace or an audio tour to know about the history of the palace and the grandeur of the Kings of Rajasthan. 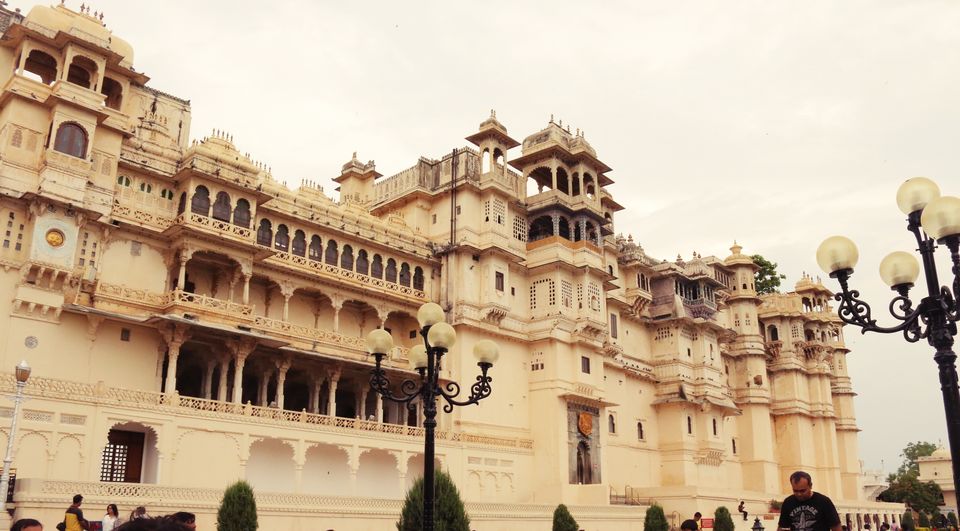 You will find lot of eateries as shown in the below picture. Check out the shops behind the cop. You can treat your taste buds at these eateries while your eyes witness the colourful sun set. 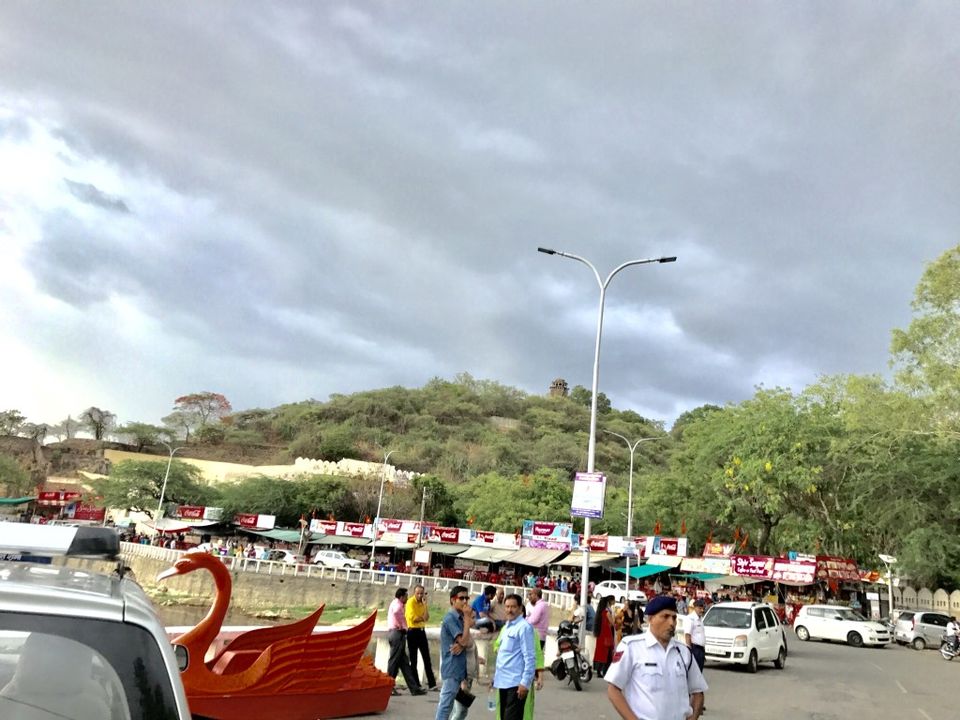 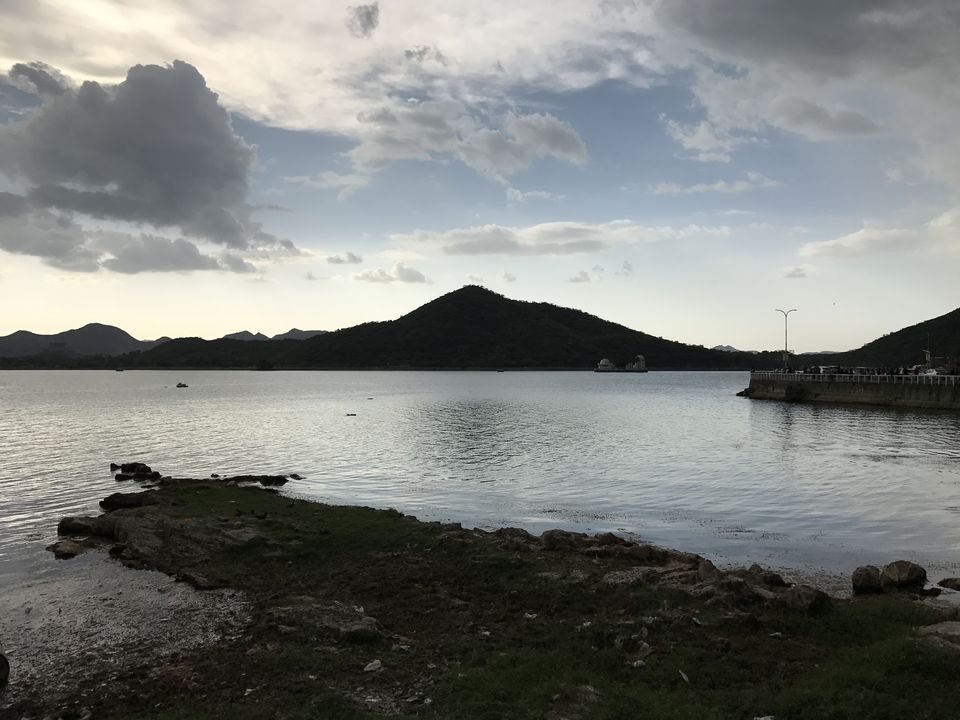 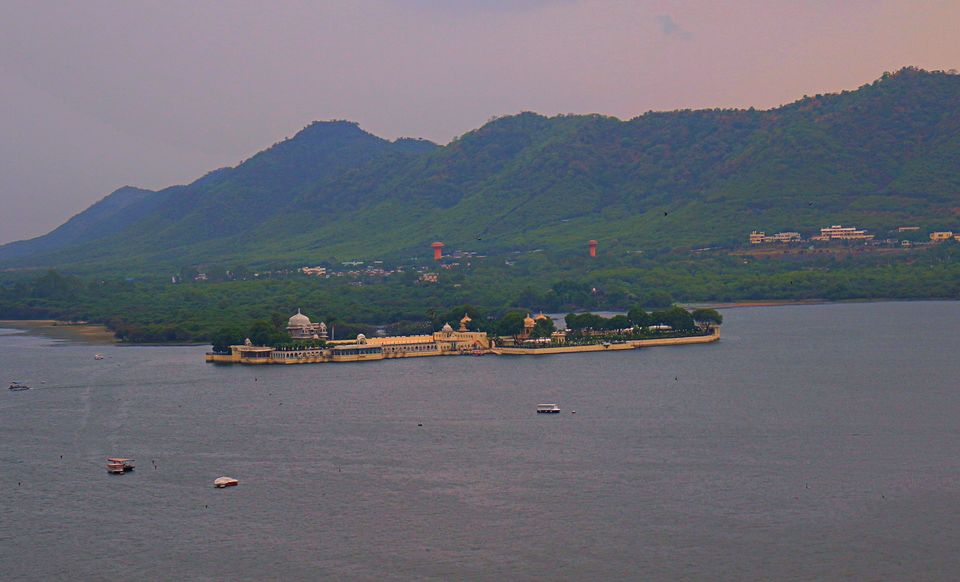 You can visit any one of the lakes out of these two but we visited only Fateh Sagar due to time constrain.

Beautifully built garden has pools and water channels. There are idols of elephants and figures and figurines of men and women adorning the place. It was relaxing experience to spend few moments in this rejuvenating place.

Do shop for the famous Pichwai and Phad painting of Rajasthan. We have been looking for a wall painting since a long time, but were unable to find one, but after seeing the paintings at Udaipur we were awestruck. We got a Pichwai painting of 5X3 ft for just INR 1100. 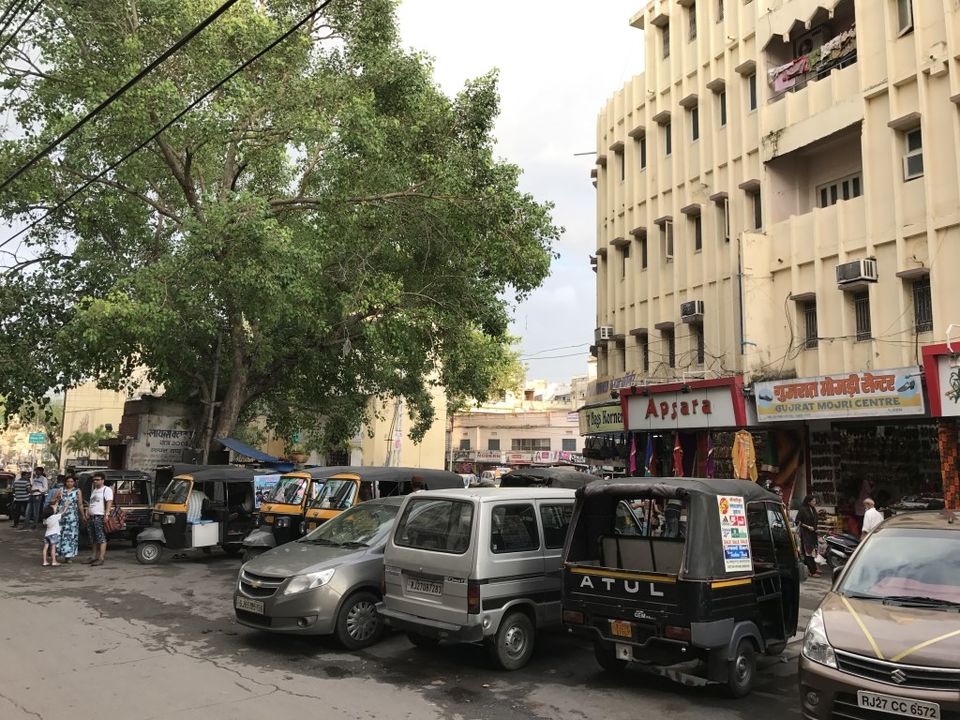 Places to visit nearby Udaipur

1. Chittorgarh fort – It is one of the largest forts in India and a UNESCO world heritage site. This fort has survived many battles and its history is worth knowing. A visit to the fort is recommended to feel the courage and valor of the Rajput warriors. 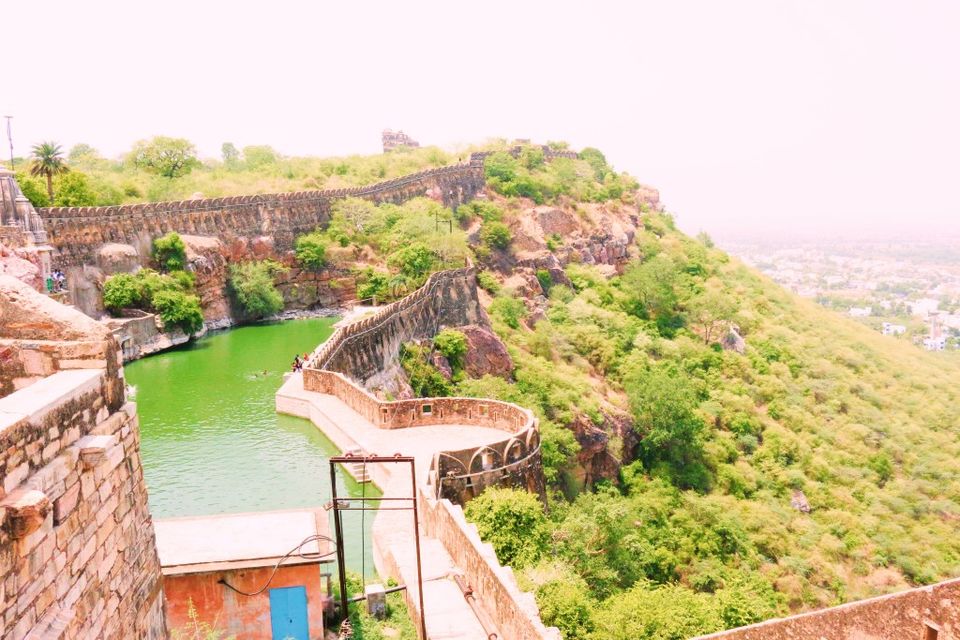 2. Kumbhalgarh fort - The fort is situated 85 kms away from Udaipur. The wall of the fort is second largest in the world after the Great Wall of China.

3. Ranakpur Jain temple - The Jain temple is 100 kms away from Udaipur and can be covered in one day. The temple has more than 144 towers carved intricately each having a unique design. 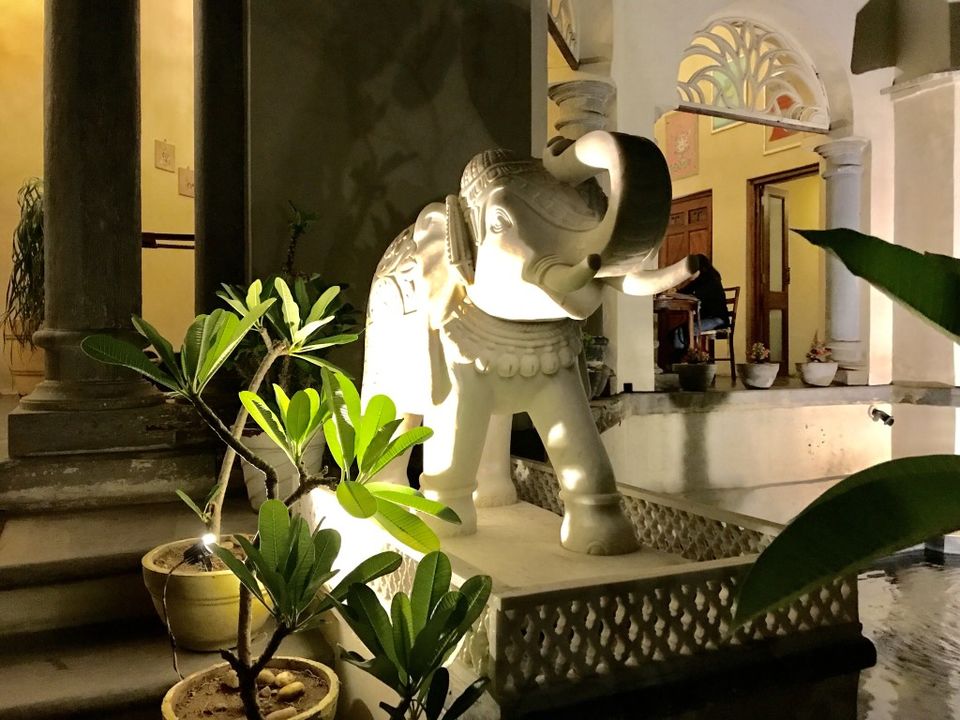 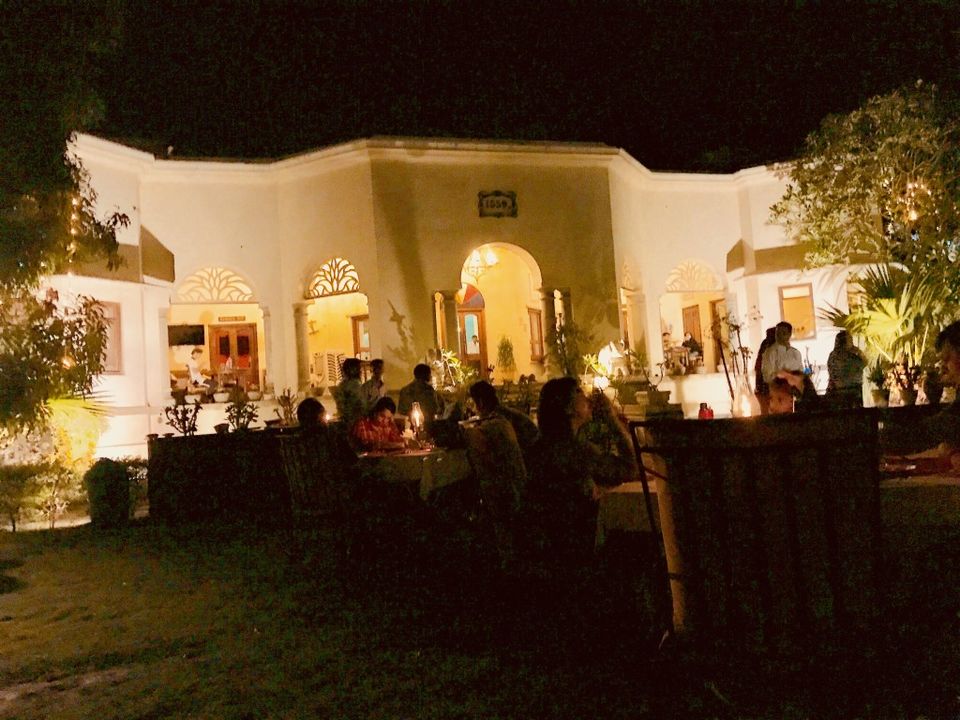 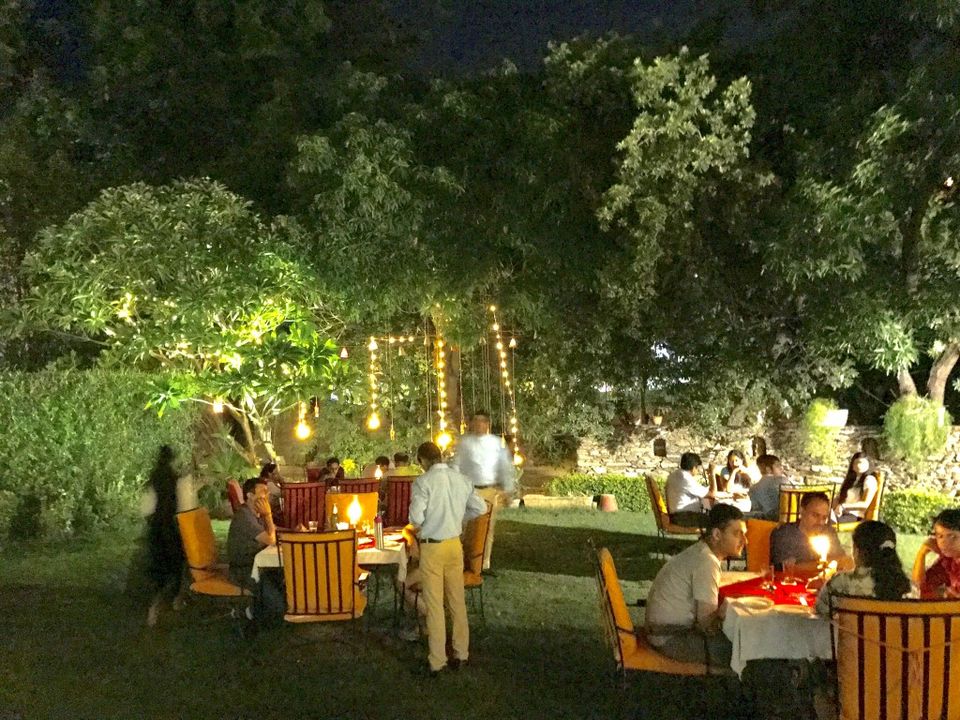 2. Padmini - Restaurant at Lalit Laxmi Villas Palace Udaipur The buffet at 999/- per person is a must try in Udaipur consisting of mammoth line of dishes originating across cultures in Rajasthan and other parts of India. Intricacies of spices can be appreciated with every bite reminding us of mother's own recipes.

5. Food stalls at Fateh Sagar Lake - Must go for the view and don't miss out try the coffee & Rabri.

We recommend staying at a hotel, which is near lake Pichola or lake Fateh Sagar. The view of the lake is going to leave you mesmerised.

Open area in Radisson Blu for family get together combined with lots of activities like Puppet show, folk dance, music etc and the spectacular sunset view. You can witness it yourself from the picture. 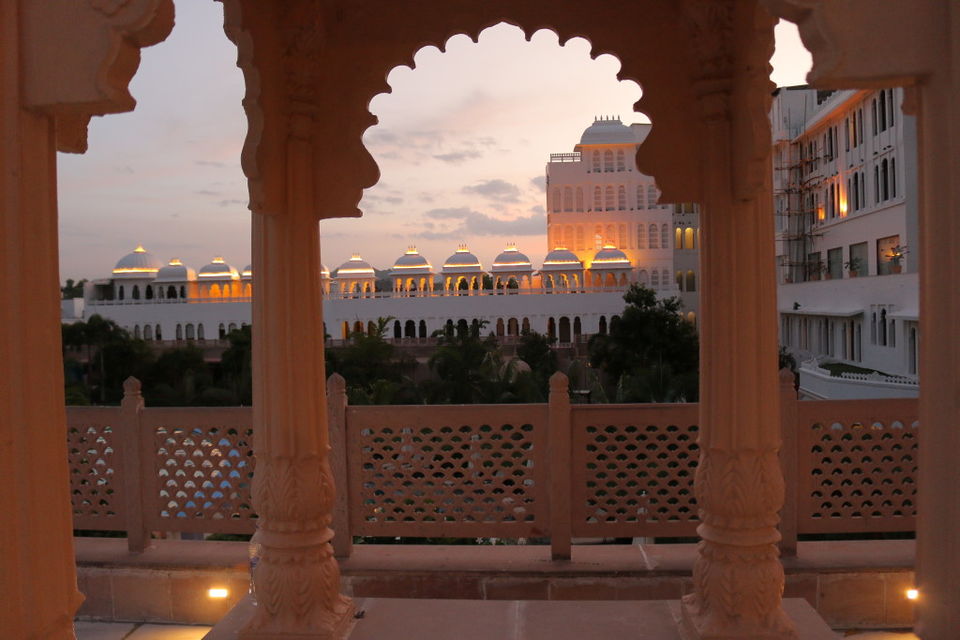 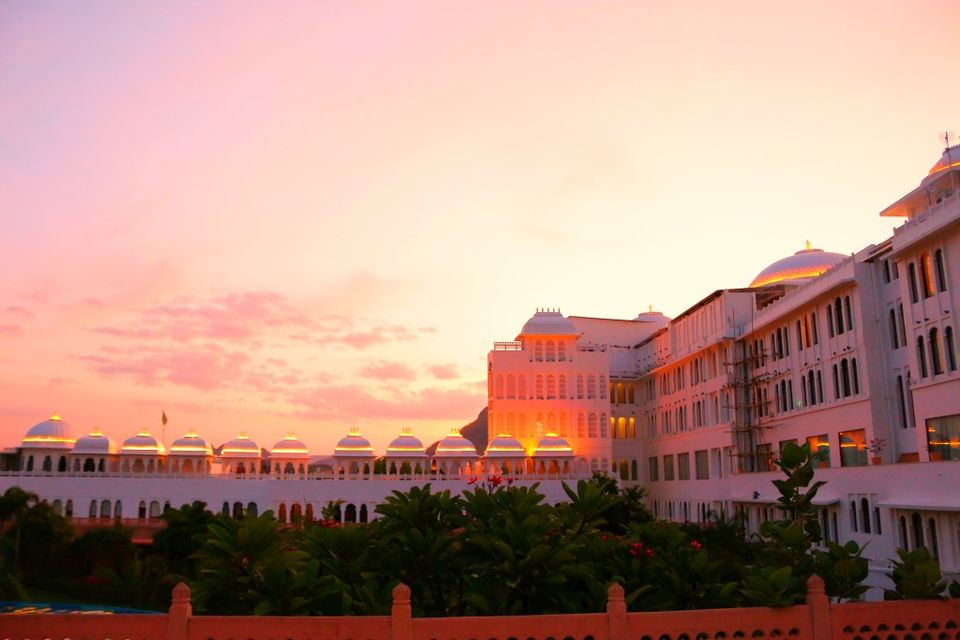 View from my lens and side railings 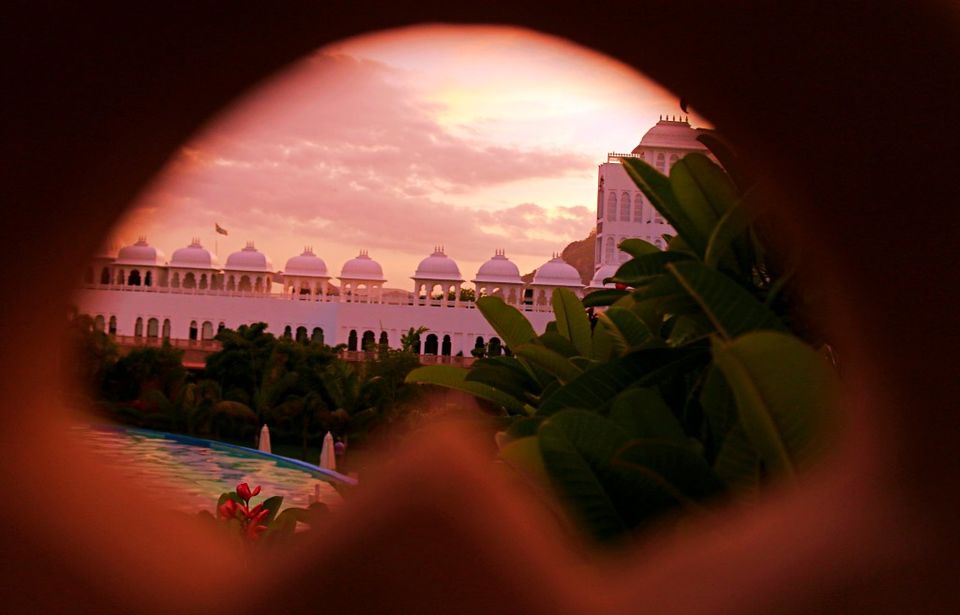 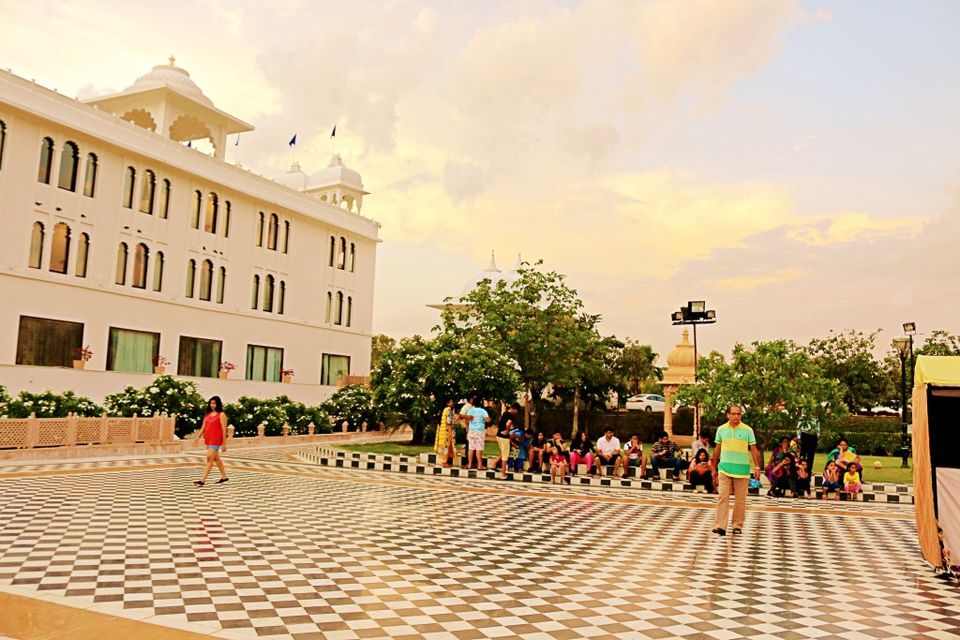 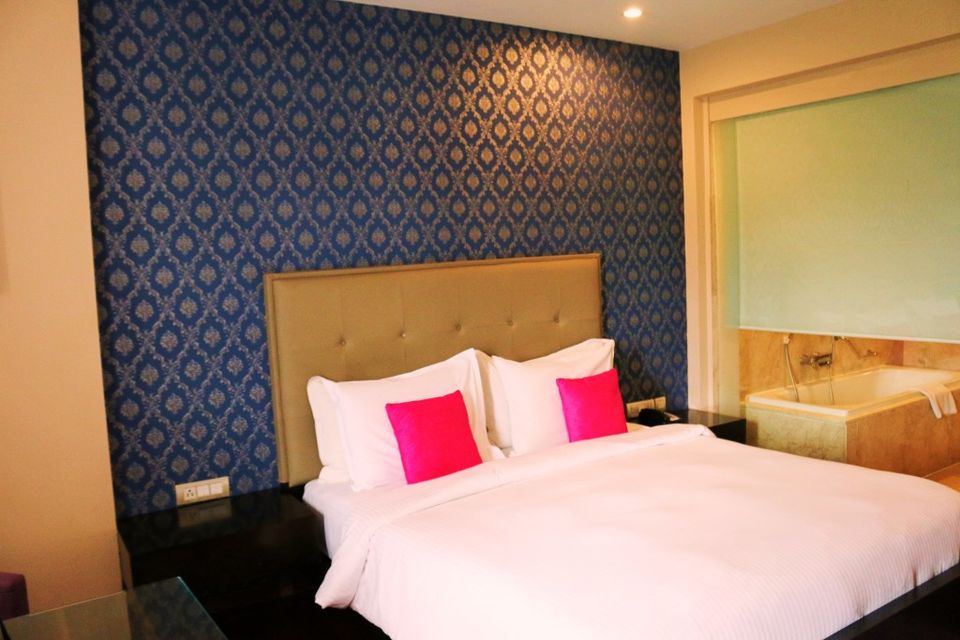 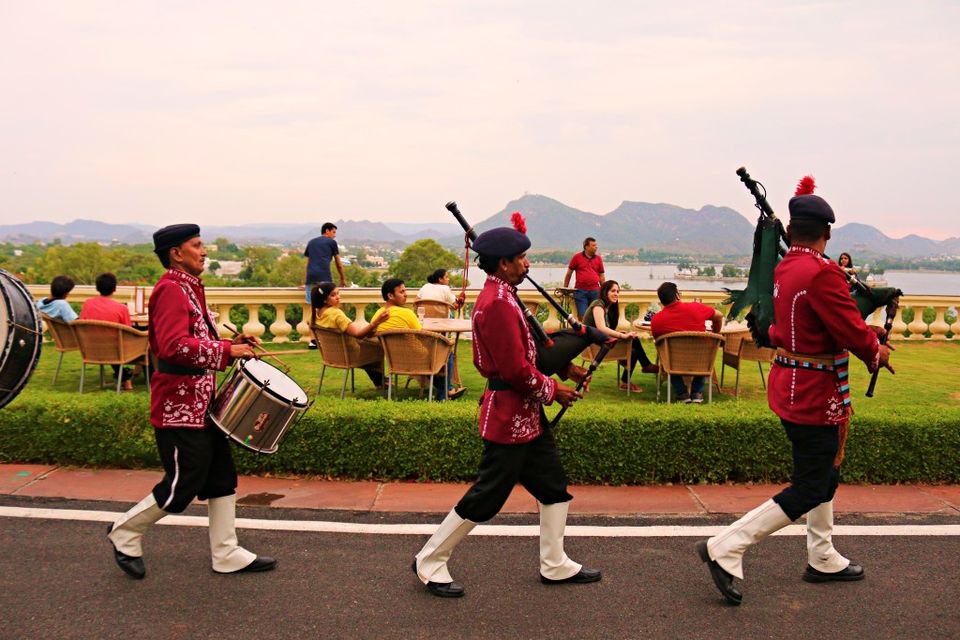 Front Facade of the hotel 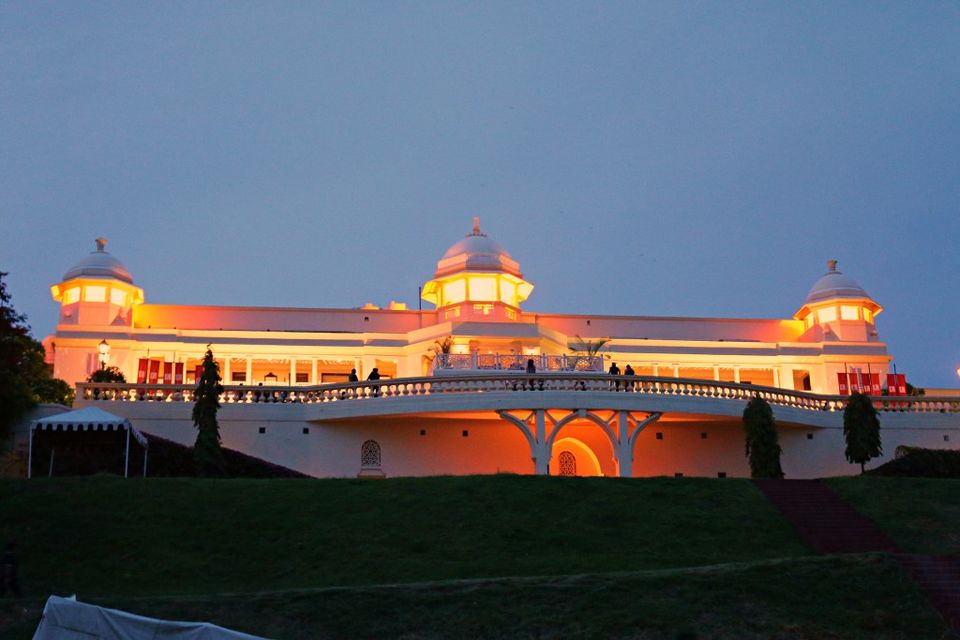 Close up of front facade 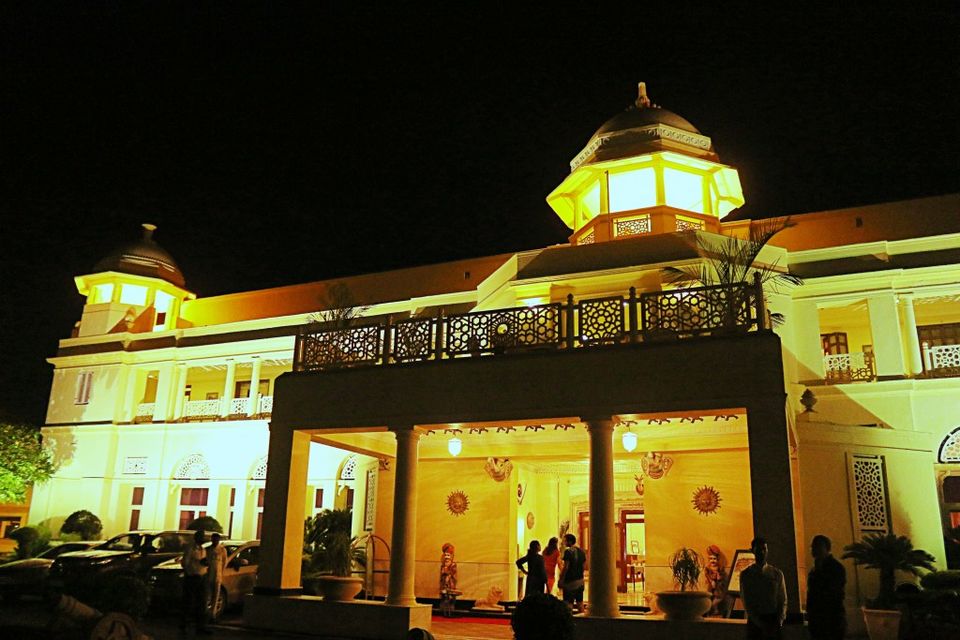 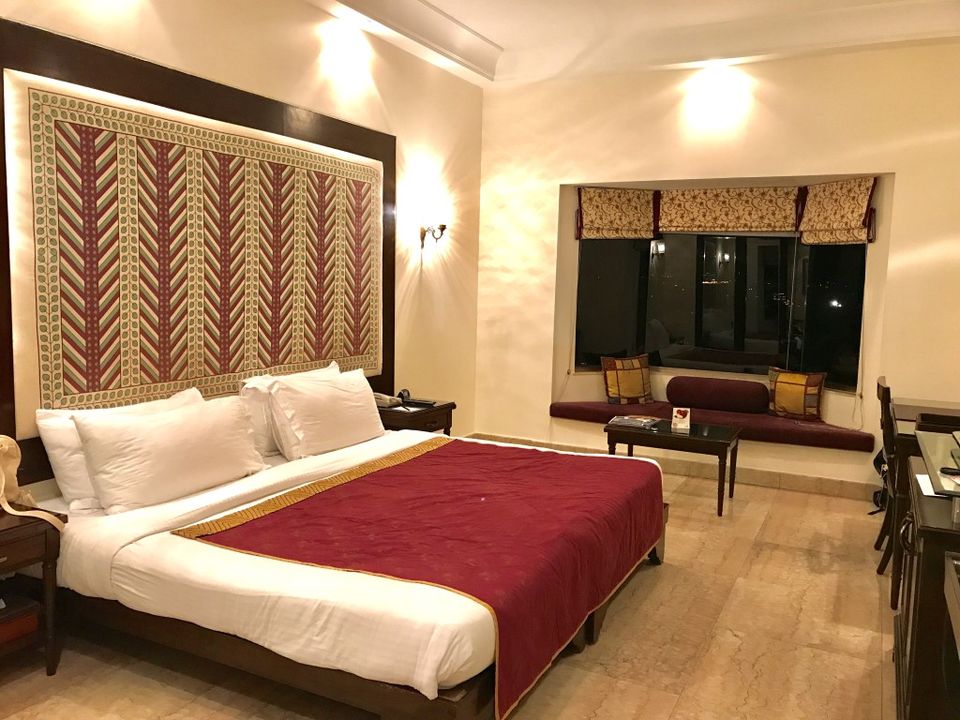 Chittorgarh is a town which is situated 120km from Udaipur. It takes around 2 hours to reach Chittorgarh. You can easily find local guide at the fort. They are really worth hiring, They take a very reasonable fees of Rs 100. 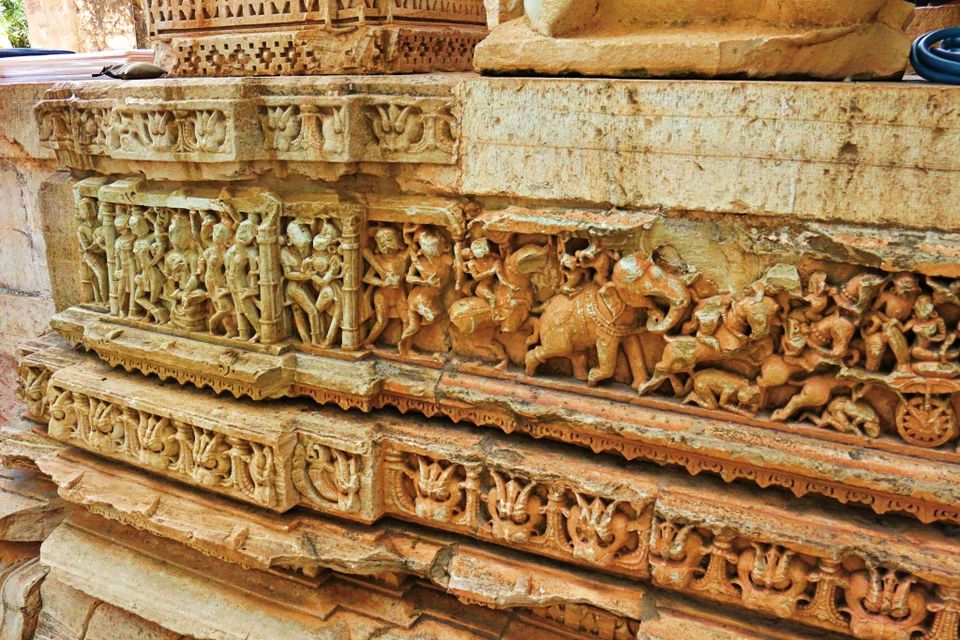 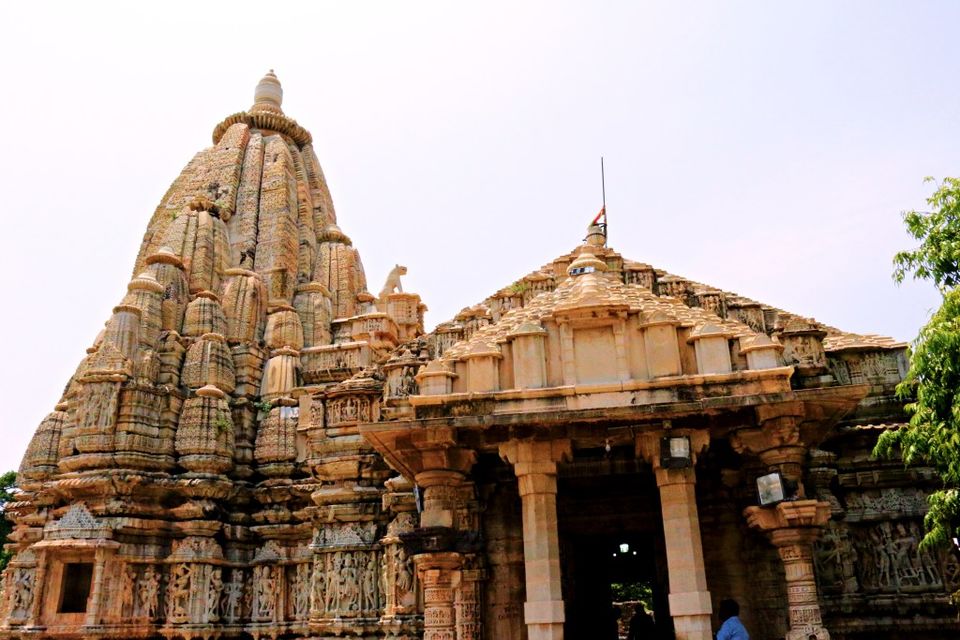 Close up of temple front side 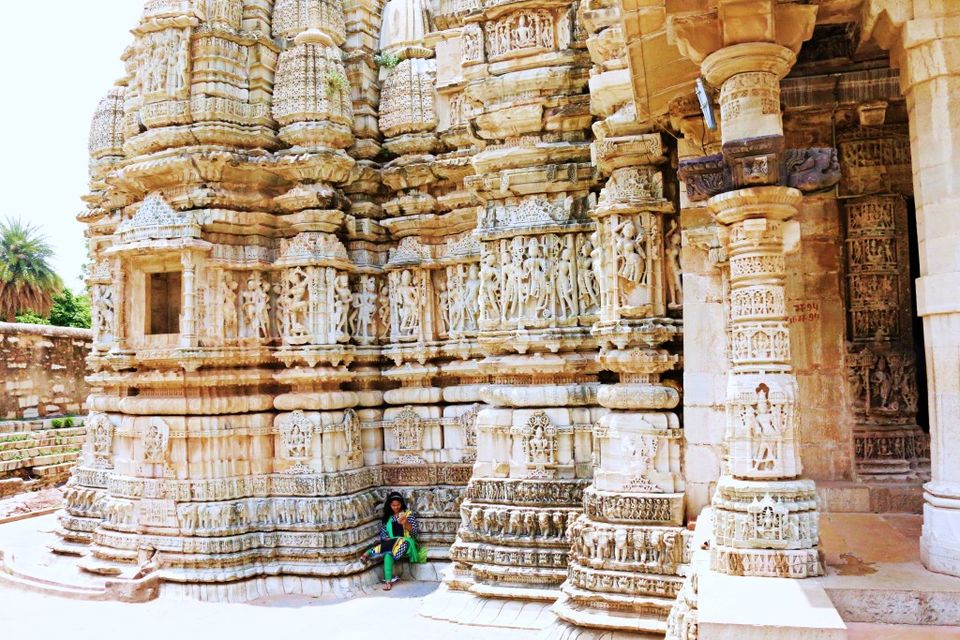 Vijay stambh by king Kumbha or Victory Pillar in 1448 to commemorate his victory over the combined armies of Malwa and Gujarat led by Mahmud Khilji. 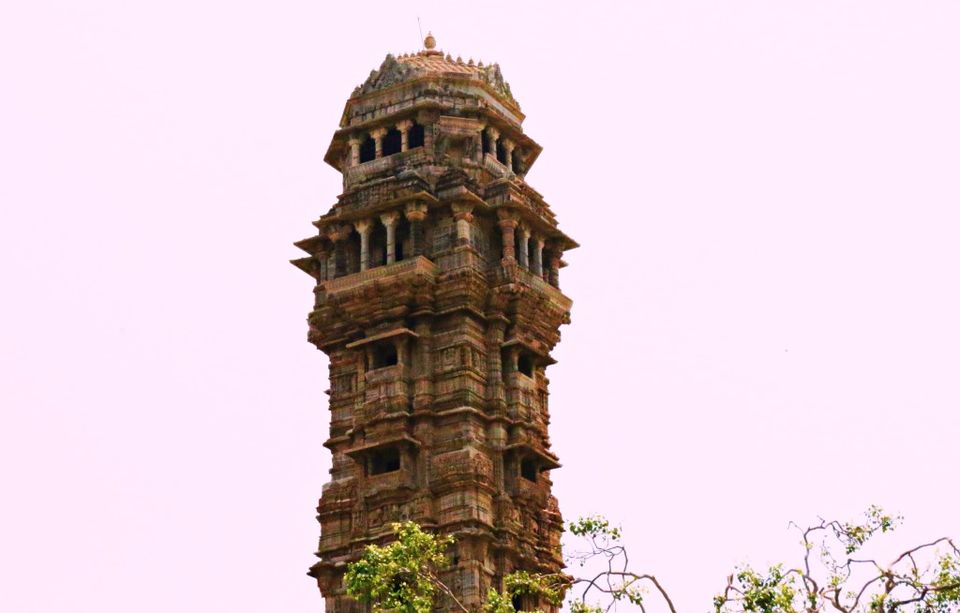 History of Chittorgarh will bring you goosebumps. Before visiting Chittorgarh, we did a lot of research about Maharana Pratap and Chetak. So we were really thrilled to visit Chittorgarh. History of Chittorgarh almost brought tear to our eyes. We dont want to make this blog too long and get into history right now but one thing worth mentioning about Rajput is that they never put their heads down in front of Mughals and always fought courageously. If you do get a chance to read about history of Chittorgarh, please dont miss the chance. We will come with another blog giving key highlights of History of Chittorgarh which we came to know from our guide and also after researching through books and blogs.