Sikkim: Abode of the Gods

Waking up to the snow white clouds the day before left us wanting for more of the same the next day. After we had settled down, we went about looking for travel agents to arrange the next part of our tour. We met a couple at M.G. Marg looking to share a cab with someone for a trip to North Sikkim for the next day. We became friends and joined them to book a cab. Going alone was not affordable for us so sharing with them helped us keep our expenses low. Due to time constraints we decided we would do this trip only to the North and East districts of Sikkim. The constant rains over the previous few days had caused a lot of landslides along the routes and heavy snowfall at higher altitudes.

Sikkim has a strict permit policy to all it's visitors, keeping in mind the security of the border areas. The state is neatly tucked in from all sides. To the North and the East, it is surrounded by Tibet, to the South-East we have the happy Himalayan Kingdom of Bhutan, to the West there is the famous mountain country, Nepal and the mighty Kanchenjunga massif separating India from it.

One of the workers at the guesthouse mentioned that the room we took had views of Mt. Kanchenjunga, the third highest mountain in the world. So that night I kept my alarm for sunrise and woke up just to see the morning rays of the Sun falling on one particularly tall peak to the far North. It looked like it was on fire. The fiery mountain awakened my day. We got our ride booked with the couple we met the day before and we were to spend the next 3 days in North Sikkim, high up in the Sikkim Himalayas.

It was a nice sunny day with stunning views. The mountain peaks only got higher by the day. The ride was bumpy and definitely not for the faint hearted, for obvious reasons there are no paved roads at some parts. We passed by towering waterfalls, deep gorges and mesmerising views of the flora and fauna the place is known for. The landscape was dotted with army encampments and small villages throughout. By evening we reached the village of Lachen. It was almost sunset and a sudden chill was in the air. You could feel the mercury dropping down. The last reflecting rays of the sun on the white peaks had a sort of glaring blue effect on your eyes. 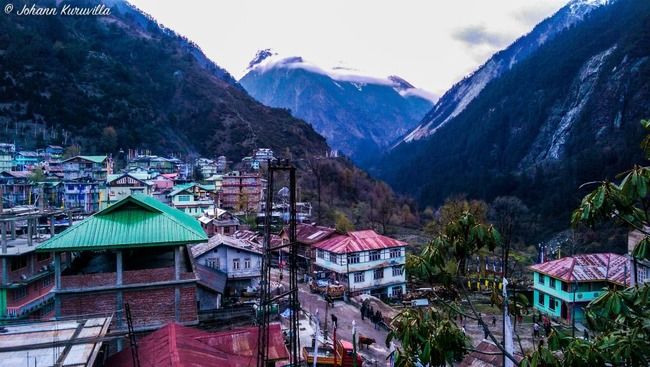 We got to a homestay next to a traditional village house and saw lots of firewood outside the home. During the winter the village is fully covered in snow for months together. The villagers collect and stock up the firewood as fuel during the summer months. The locals told us that there was a buddhist monastery a short hike from there.

Perched up the hill where the village is located, is the Lachen Monastery. We started hiking up the trail. Sunset was upon us. From far we saw the gate to the monastery was already closed for the day. We reached the entrance and for some reason even though we were told that they do not entertain visitors after sunset, a monk cladded in the traditional orange robe gladly opened their doors for us. Delighted, we got inside to see the interior of it and the amazing artwork. This was the first time I was in a Buddhist monastery.

After a short while, we descended back to our homestay. Soon after we got back we took time to visit the Bhutia family who had arranged us the stay there and was cooking us dinner for the night. Inside their small home was a fireplace that doubled as the kitchen and the living room. Neatly stacked brass kitchenwares and utensils filled the cupboards in the room. We felt very much at home and the hosts were so welcoming to us, we sat there for a good 2-3 hours. The hosts were curious about the world we came from that they had only heard of. We shared photos and had a good chat with them. After a warm dinner, we were off to an early sleep. The night was freezing cold, well below single digits and I kept waking up gasping for breath due to the high altitude we were at.

The next day we were woken up early to make our way to Thangu. Lachen was at 9000 feet, almost twice the height Gangtok is situated at and now we were going up to 14000 feet. The road from Lachen leads up to the famous Gurudongmar Lake which is one of the highest lakes in the world at 17000 feet. Permit to the lake is restricted to foreigners because the China border is a mere 5 km from there.

If you are not visiting the lake, one can go half way to it and visit Thangu after which it is a cold desert compared to the likes of Ladakh. Thangu at 14000 feet was the last human settlement before the lake. En route we stopped for breakfast and had some bread, yak butter, jam, tea and eggs. You'll have a hard time trying to melt the butter.

We stopped at Tsopta Valley at Thangu. An open area in between the high mountains, a snake like river flowing from the high glaciers almost frozen, small wooden houses at its banks with beautiful flowers growing around and the pure azure skies above. This is heaven or what? Here we found our childish selves and played with the snow and made snow men. Unable to go ahead to Gurudongmar Lake due to the non Indian passports that two from our group were carrying, we returned back to Lachen, had lunch, bid farewell to the lovely family and departed.

The Lachen River which flows from the mountains meets the Teesta River at a point called Chungthang. From here we travel north again on the other side of huge mountains along the Lachung River to the village of Lachung. We made it to the village by late afternoon the same day. Situated en route to Yumthang Valley, this area is known for its varieties of Rhododendron flowers. We stayed here for another high altitude cold night and decided to head to the valley in the morning.

The morning was overcast, and cloudy. The Lachung River was frozen to ice overnight. As we gained altitude the gentle rain showers turned to snowfall. Experiencing this for the first time we felt like kids who wanted to stay and play outside all day. At Yumthang we stopped for some hot tea and breakfast and then travelled to the northernmost drivable point called Yumesamdong where they say the snow never melts. We witnessed some fresh landslides and avalanches on the road to Yumesamdong.

With a sense of national pride making it till here, at the borders of India, we played patriotic songs to enjoy the moment as we passed by the army camps.

The road was snowed in after a point. We got out of our jeep and climbed the remaining on foot with gum boots which we rented at Yumthang for a decent price and our heavy winter jackets and gloves were on. We trekked up in the knee deep snow to reach a point where when we turned back we could see the entire valley below and the river meandering through. This I can say was simply one of the best views I had ever seen in my entire life and had left a lasting impression on me, at an altitude of 15000 feet. 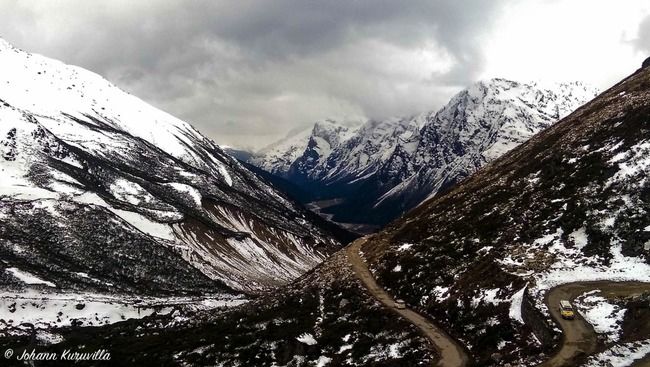 While the others enjoyed snow sliding and skiing and the other activities, I sat down on a big rock to fall into a trance looking at the valley below. They give you a sense of insignificance of your very being. You become a very tiny nobody in front of these massive structures of rock and granite pushing its way up touching the sky. This is what attracts me back to the mountains every time. Living in a world where you try your best to be somebody, travelling to the mountains give me a necessary antidote for insanity. There is a great quote from the great Sir Edmund Hillary, " It is not the mountain we conquer, but ourselves " and how true it turns out to be. 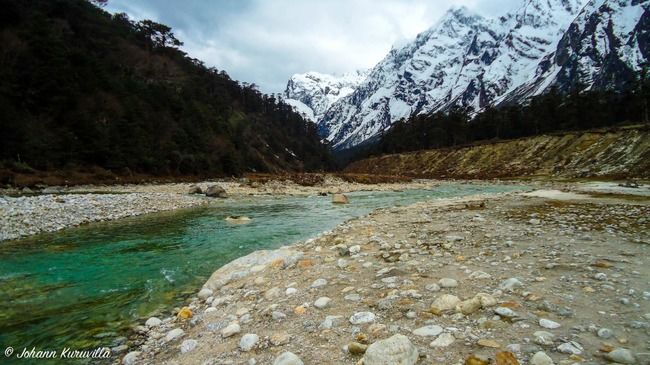 After a few hours, we rolled back to the Yumthang Valley, spending some time next to the Lachung River bed, where a line of small huts provide you with food and other basic amenities. We got reenergised and sat around a fire place which used yak dung to fuel it. After enjoying the heat for a while, we left the picturesque valley back to Lachung village where we had our lunch and we prepared for the long ride back to Gangtok.

The two days of up and down journey had been very tiring for the body maybe, but eternally relaxing for the mind, the experience will last for a lifetime. We got back to Gangtok by nightfall, had a good heavy Indian dinner and collapsed on our bed back at our homestay. 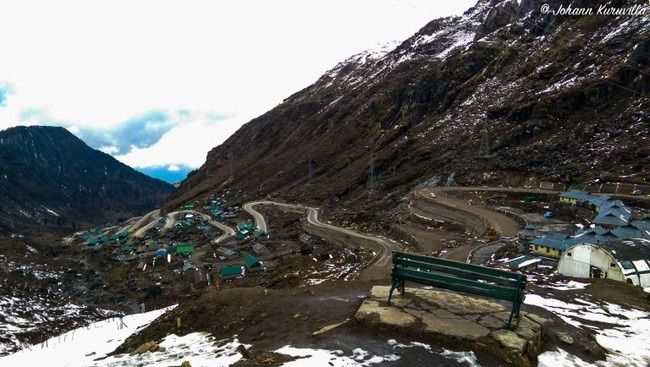 The next day we rose up early and we were to visit East Sikkim. Climbing the flight of steps from our homestay to M.G Marg was a task all throughout our stay there. Sometimes we had to do this twice or thrice a day. That day we had to do it the first thing in the morning without breakfast. We got back together with the same couple from before for one more trip. The route leads to Changgu Lake or Tsomgo Lake, beyond which only Indians are permitted to visit the trading border with China called the Nathu La Pass.

At the lake we got to ride a yak around the lake and felt like it would take us on the ancient silk route to China. Talking to the local Yak herders they explained how they take care of their yaks. Until then, all I knew was that Y stood for yak and nothing more. While we were there we experienced hail for the first time. Small goblets of whites rain drops fell around the lake.

We spent the time taking pictures and talking to people we met there. The grey view of the almost frozen cold water of the lake will send a chill up your spine. We had a good round of snow ball fights with each other before returning back on the road. The weather was turning really bad after the hail and had to return to Gangtok before the roads closed and to avoid getting stranded there in case of new landslides. 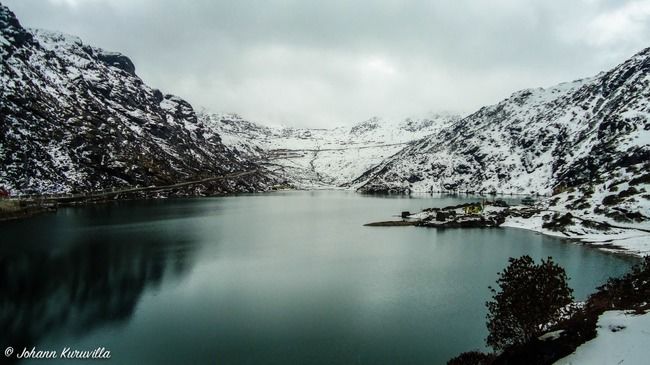 Gangtok welcomed us back to some very heavy rain for the rest of the day and we retreated to our homestay for the night. The next day was going to be our last day in Sikkim and we were not in a mood to leave. We had left a small part of ourselves there and it still remains there.