Jaipur to Jodhpur - The Backpacking way!

A visit to the land of palaces had always been in mind since many years. I had calculated one week time to explore Rajasthan. The plan was to take the Mumbai-Jaipur express and start off. However on the way I got down at Sawai Madhopur to visit Ranthambore national park. From there, booked a train to Jaipur starting at around 7:00pm. The food options at Sawai Madhopur station premises was pathetic. If visiting, it is better that you carry preserved food items or enough snacks to fill your tummy.

Jaipur city seemed to be as crowded as Mumbai. The auto walas will take you to the desired location, be ready to pay the fare they ask. The night stay was arranged at Moustache hostel (if arriving post check in time, kindly inform your hotel staff over phone, so that they keep the room blocked for you). I had to wait for sometime to check-in before going up to the roof top restaurant to have dinner. The food was tasty and satisfactory. The ambiance is good especially for solo travelers and foreigners. There is a pretty decent lounge near the reception to sit back and read/play.

The good thing about auto walas in Rajasthan is that they offer to take you around the city the first time they meet you at the station/bus stand. I didn't deny the offer as I was a first timer there. The next day morning I started city tour in the following order -

1. Albert Hall museum (diverse collection of exhibits, located in the heart of the city, there is a zoo nearby if you have children you may visit that too). There is a CCD and restroom facilities in the premises.

I just saw Hawa mahal on the way in auto and chose not to go inside.

2. Jaipur City Palace You can take your cameras inside after paying the camera fee along with the entry fee. The palace is well maintained, most of its interiors is like a museum for visitors. The royal family still resides on one side of the palace. You can finish exploring the place in an hour and move onto Jantar Mantar which is situated just across the road. 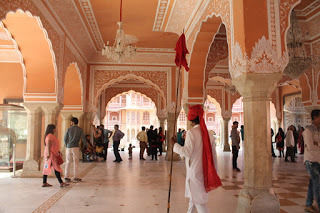 It is advisable to hire a guide here in order to understand the significance of the scientific instruments/structures. There are 5 Jantar Mantars in India constructed under the leadership of Maharaja Jai Singh II of Jaipur in 18th century. The world's largest stone sundial is situated in Jaipur Jantar Mantar. Stopped to have lunch at a small roadside hotel on the way to Amber fort.

Plan your visit to Amber fort in the evening so that you don't get burnt in the sun. Ideally I would suggest not to opt for elephant ride up the hill, instead walk and enjoy the hike. Why harm the poor animals and also you can save a 1000 bucks. Inside the fort you will get guides who will charge you a 100 or 150 Rs which is worth it. My guide took me around and explained the various parts of the interiors and their historical importance. Many Bollywood films like Jodha Akbar and Bajirao Mastani has been shot in this fort. There is a temple of Kuldevata (household deity) inside the fort where the Royal family continues to pay visit. It was almost 6.30/7 pm when I finished seeing the fort. Suddenly the lights lit up and the whole place looked so amazing in the orange glow. This is another advantage if you visit the fort in the evening. I met the auto wala and proceeded towards the Bapu bazar (market) planning to do some shopping. However the shopping didn't happen as it was a Sunday, holiday for all local markets. 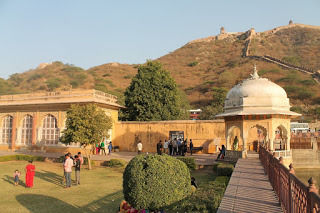 Jodhpur, 11:30 am: I got into an auto heading to Kesar Heritage home stay near clock tower. The room was well done in a true heritage manner and had a small balcony which had only views of next buildings. There was a rooftop restaurant with a view of the majestic Mehrangarh fort. Outside, the alleys were dirty and poorly maintained, garbage and faeces all along the way. Honestly, Jodhpur was nothing like I had imagined.

Post lunch, I decided to explore the fort. Later, realized that it was a bad decision as the fort entry closes at 5:00PM sharp. An auto guy ditched and left me half way saying that the road is under renovation and took Rs.100 from me. From there I had to catch a share auto up the hill. As I reached just in time, the entry ticket was provided but I had to hurry because the guards kept on telling it was time to close the gates. I took some photographs in a hurry and spent ten minutes on top of the fort near the temple watching the sunset. Although its named as blue city, only some portion of the city is painted blue. The Umaid bhavan palace where the Jodhpur Royal family resides, was clearly visible at a far distance from the fort. On the way back to the homestay, I hired an auto for about Rs.200. He agreed to take me for sightseeing the next day for Rs.600. (Tip: if you are a solo female, make sure you reach back the city before dusk as the premises will be quite deserted after 6:00PM).

On day 2 morning, I decided to explore a good hotel for breakfast. Unexpectedly, during that random walk, I found this awesome theme hotel named Nirvana. The ambiance was mind blowing and the Poori bhaji was just exceptional. This hotel also have a splendid rooftop restaurant arrangement with a great view of the fort. Please check http://www.nirvana-home.com/ for route and pictures. The restaurant downstairs was designed with colorful wall paintings from Ramayana. The staff was very friendly too.

After breakfast I met the auto guy and started city tour in the following order:

1. Jaswant Thada (very close the fort, hardly need half an hour to finish this) - the cenotaph built by Maharaja Sardar Singh. It serves as the cremation ground for Royal family of Marwar. 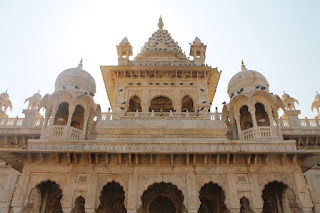 2. Mandore Garden (8km from the city, takes an hour and a half to complete) - a collection of temples and memorials. There is a Ravan temple here since the place is believed to be the native place of Raavan's wife Mandodari. 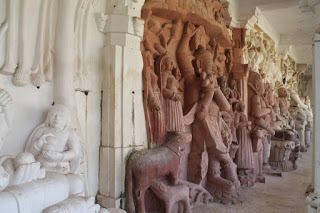 3. Umaid bhavan palace - Nothing fancy about this place, just a museum on one side of the palace and some exhibits of vintage cars. Hardly takes 1 hour to finish. 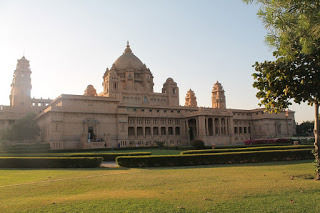 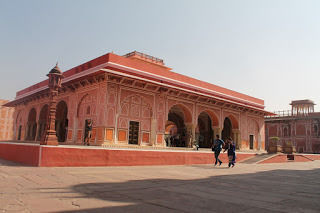 I skipped Choki Dhani (a Rajasthani village resort) as someone suggested it is expensive and a bit far off the city. Thus, I winded up touring the Pink city.

Next day early morning, I caught the 06:00 am train to Jodhpur (approximately 4-5 hrs journey, booked tickets in advance). The train was jam packed with passengers. The only food option in the train was bread-cutlet sold by local vendors. 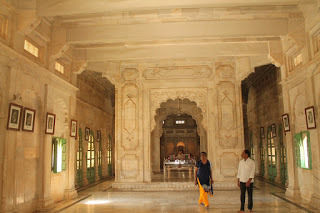 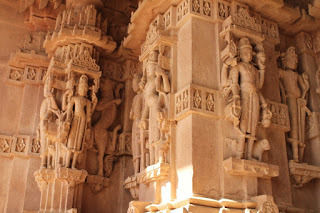 I don't advice you to do much shopping in Jodhpur as everything is overpriced.

I continued to the next destination Udaipur in an overnight sleeper bus.