Meghalaya: Beyond the Rains

India’s North East is a fascinating place, a land of pristine landscapes, virgin rain forests, crystal clear rivers and lakes. Combined with this natural beauty is the anthropological richness of the numerous native tribes that reside in this part of India.Due to the remoteness, it is often dubbed as a “Paradise Unexplored”.

Once the capital of Assam during the British Raj; Shillong became the capital of the new state of Meghalaya post-independence. Set among wooded hills, with quaint English style cottages and numerous churches and chapels; the city has quite an English charm floating about in the air. But the colonizers have left more than just villas and churches; the legacy that lives on here in the hills is Christianity. But with time Shillong has leapfrogged into the twenty first century like the rest of India. 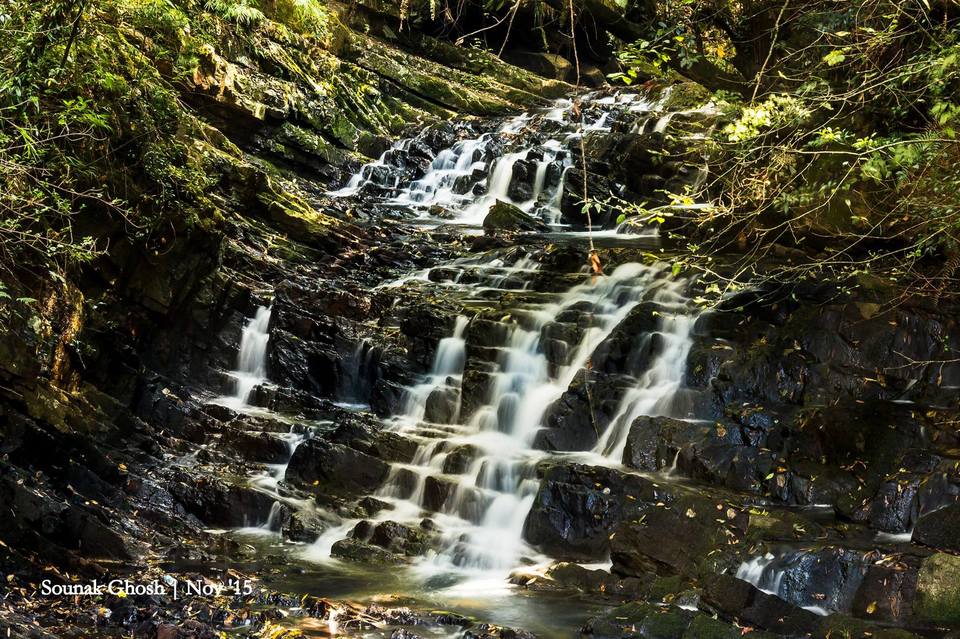 A city with manicured gardens and serene lakes, one is never far away from nature. And just outside the city are two beautiful falls — the Elephant Falls and the poetically dubbed —  Sweet Falls.

Venturing outside of Shillong, the woods give way to grass carpeted hills rolling on for miles till they met the horizon; the approaching winter slowly turning them from the lush hue to a dazzling amber. Driving on through the countryside inhabited by the Khasi tribes, I reach the village of Pynursla where the road bifurcates; I take the one which goes toward Laitlyngkot. The scenery gradually begins to change; the grasslands make way for the canyon like steep cliffs. At Laitlyngkot one can gaze at the magnificent deep valley flanked by lush hills meeting the heavenly turquoise.

From here onward the road negotiates the cliff sides till one nears Riwai. As I approach Riwai the road is engulfed by forests interjected by bamboo and betel nut plantations. Just before the village of Riwai, there is a sturdy canopy walk made of bamboo which resembling a hunting ‘machan’. Form this perched vantage point, a commanding view of the hills are on offer. It is a place shrouded in a breathtaking silence, punctuated by far off waterfalls and the chirruping of the birds.

Not far from Riwai is Mawlynnong. It may seem like another unassumingly simple Khasi village. But it has the distinction of being (arguably) the cleanest village in Asia. The road now descends gently through betel nut plantations until one can see the hills blend with the gentle plains of Bangladesh. A few gorgeous waterfalls flank the hillside of the road, undercutting Bailey bridges before flowing into the neighbouring nation.

The road; part of the Asian Highway; finally enters into Bangladesh at Dawki. Dawki — still off the mainstream tourist circuits — is a place that boasts of resplendent beauty. It has the power to leave a person struck with awe. The beautiful Umngot River, the color of gorgeous jade; flows through a deep canyon from India into Bangladesh. A British era cantilever bridge spans the river connecting the Khasi hills with the Jaintia. One may easily mistake the place for the outdoor shooting location from the legendary film “The Bridge on the River Kwai”. Yet, the green of the river is misleading, it only mirrors the verdant rainforests of the surrounding hills. People fish here in little dugout canoes, and at places where the water is shallow, the boats’ shadows fall on the riverbed making it look as if floating in air; giving away the clarity of the water. 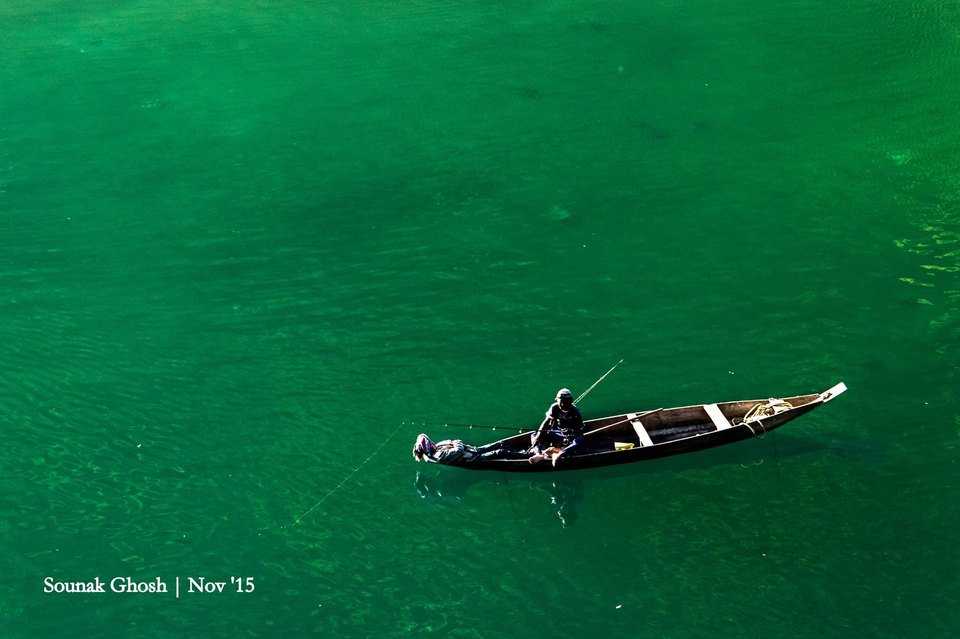 The border at Dawki contrary to the general notion is unfenced, only a single white pillar demarcating the end of Indian Territory and the beginning of Bangladesh. Beyond the border lies the Sylhet district of Bangladesh, once part of the Jaintia kingdom, ceded to East Pakistan (later Bangladesh) during independence and subsequent partition of India. Suddenly a torrent of emotions gripped me. What if the nations had not been partitioned during Independence? Perhaps the border existed in the minds and maps only… Being a Bengali; I felt somehow a strange invisible bond with the people on the other side who spoke the same language, ate the same food and clothed in the same way. What if we could reunify? What if…? I wondered!

The thoughts kept on tormenting me while on the journey back to Shillong. Thoughts of generation old ties, of the dizzying landscape I had seen throughout the day, of the symbiotic coexistence of the resourceful Khasi people with nature as the sun bathed the bathed the Khasi hills in tangerine. And, beyond all this I was looking forward to the next day’s excursion to the mythical land of — Sohra; famously known as Cherrapunji — the wettest place on planet Earth.

The next day; on the way to Sohra (Cherrapunji); brought clear skies, wisps of cotton like clouds floating about in a sea of brilliant blue. This was very much unlike the Sohra; a place which is expected to be perpetually overcast given its claim to fame for being the wettest place on earth. Perhaps climate change was having its toll here as well. On the way to Cherrapunji, the road is lined with numerous waterfalls which were not dry. But the limestone walls of the cliffs were stained with signs of flowing water. Even though the whole journey is beautiful but a viewpoint almost halfway to Shora offers brilliant view of the deep Mawkdok Valley.

Cherrapunjee is famous for its gorgeous waterfalls. The first major waterfalls is the Wah Kaba falls; some distance from the Mawkdok viewpoint which flows over the road and plunges into a deep gorge. Yet just before entering Cherrapunji is perhaps the best of the falls. Hidden from the main road, one has to travel over bumpy, unpaved roads and a bailey bridge to reach the Dain Thlen Falls.

Sohra was the erstwhile capital of the Khasis until the British shifted it to Shillong. And places like these reverberate with legends. Like the local legend tells of a giant serpent (Thlen) which used to reside here and ambush villagers. People kept falling prey to its voracious appetite until it was it was slain by a village brave heart and chopped into pieces. The gnarled rocks of the river resemble the chopped up meat of the snake, indeed the color of meat. Hence, the name Dain Thlen meaning —where the “Thlen was cut”. Even though it seemed quite a farfetched tale; but the landscape was so surreal; it could well induce someone to come up with such stories; especially on days when the villages here are battered by unrelenting rains from a steely sky. The falls is a huge horseshoe and one has to cross the river itself to view it plummet a couple of hundred feet into a gorge. I imagined what a sight it would make in its full monsoon glory. I had already surrendered myself to the captivating beauty of the land; now a quest for the Khasi folklore gripped me. And the quest of for the legends took me to the famous Nohkalikai falls; albeit via a detour through the Sohra caves, a hair raising journey into the cavernous womb of the Khasi hills.

The Nohkalikai falls is one of the highest waterfalls in India, plunging over a thousand feet into an aquamarine pool from an emerald precipice. The fall looks like a white silken scarf fluttering in the wind amongst the lush vegetation. The falls is named after a Khasi woman – Ka Likai and the name of the falls loosely translates to “Jump of Ka Likai”. Unfortunately the story behind the falls is a heart wrenching one, of betrayal and murder: Ka Likai had plunged to her death from grief and anger at the falls after she came to know that her husband had killed her beloved daughter and fed her the very meat. For quite some time I stood transfixed looking at the beauty of the crashing water while at the heart felt heavy with the tragic story.

The last stop for the day was the Nohsngithiang falls famously called the Seven sister water falls because of its seven streams. The place where I stood, offered a commanding view of the falls to the left, the deep valley below and floodplains of Bangladesh glistening in the afternoon sun. The spell binding beauty of the scene was dizzying for the senses.

When I came to Meghalaya, I was tipped off by some that it was place of beautiful waterfalls and captivating scenery and the most common notion: of being the wettest place on earth. But after visiting this fascinating land, I came to realize that Meghalaya was much more than that. It was about the deep rooted connections of the human being with nature, of ancient folklore and traditions, of colonial legacy, a reminder to the partition of India and of course of stark natural beauty. A place which left me wanting for more, as there were many more such places which perhaps was destined to open up their secrets before me sometime in the future. But for the time being I was happy; happy to have peered into the life of the land fondly called ‘The Abode of the Clouds”. 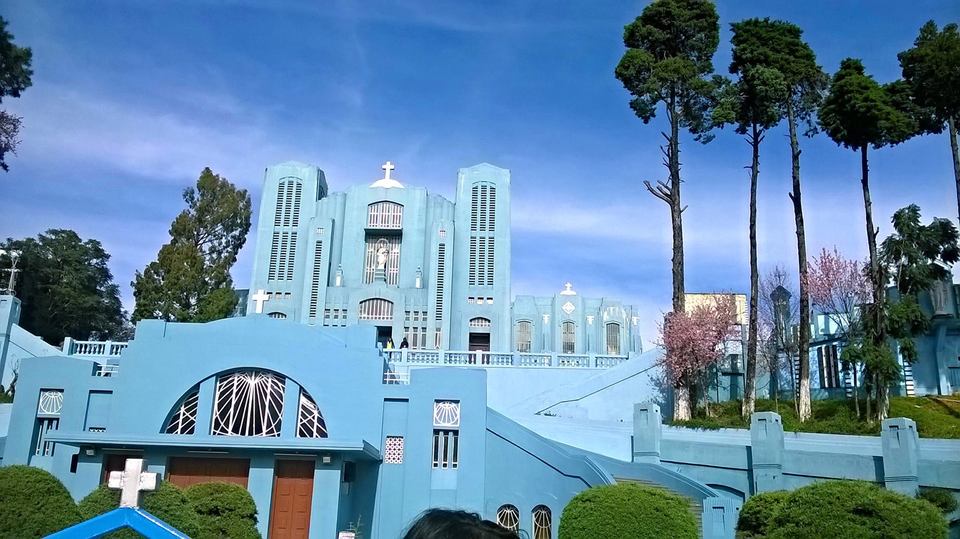 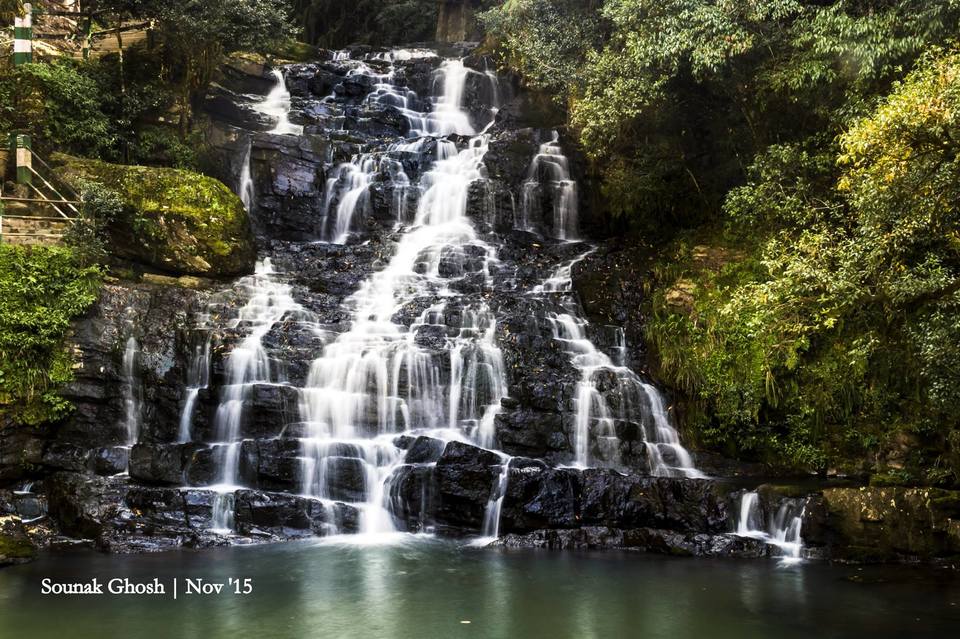 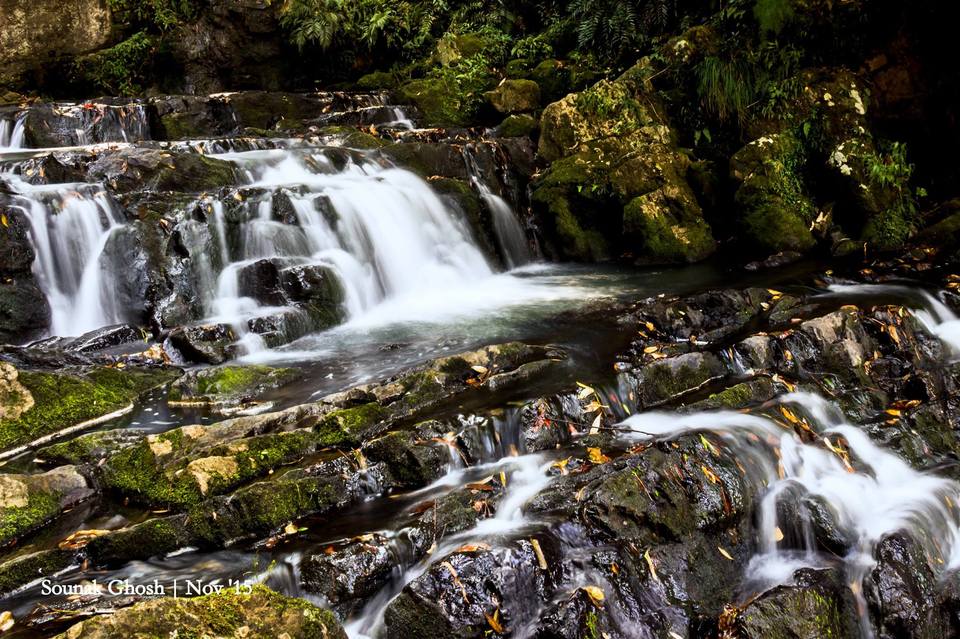 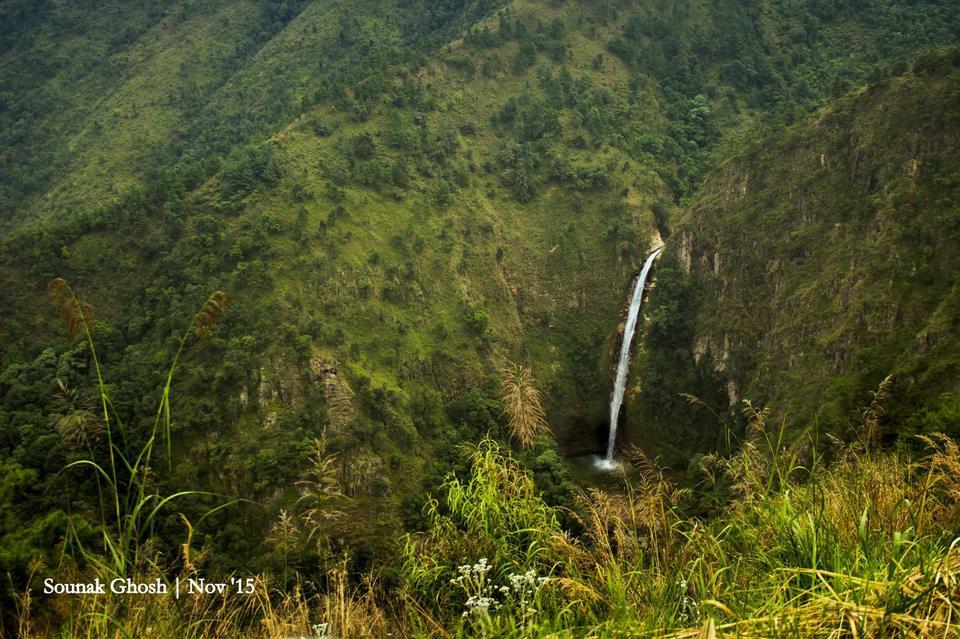 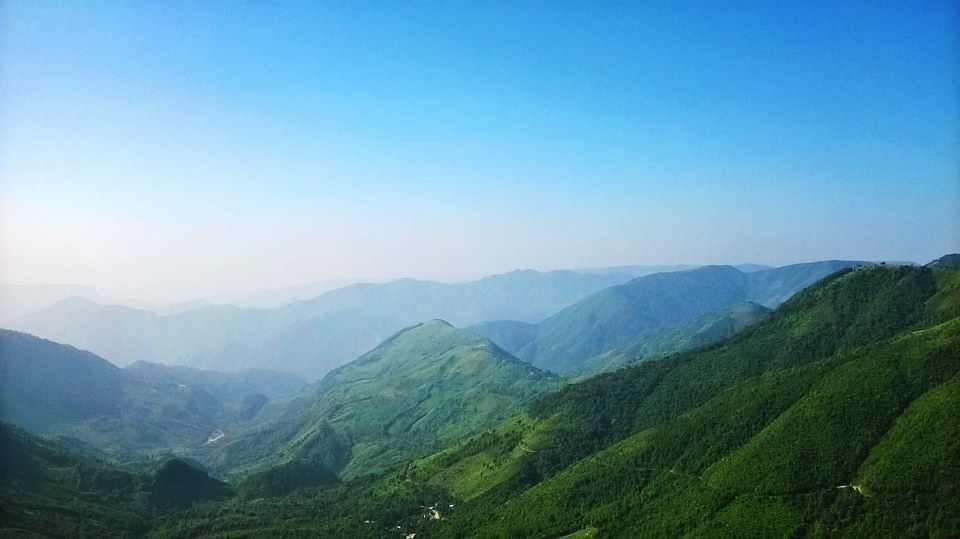 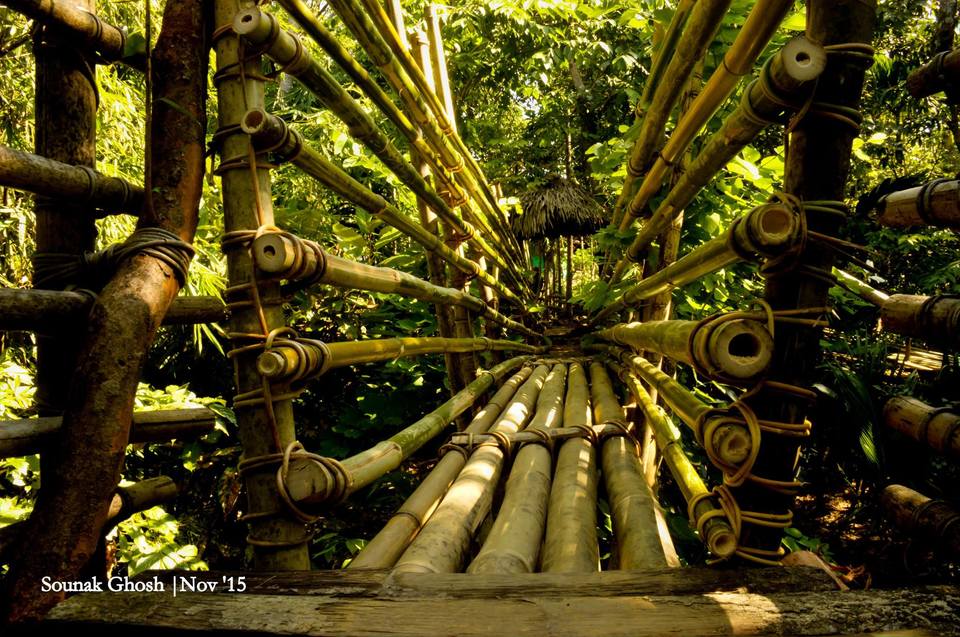 At Riwai; one can witness the ingenuity of the Khasi people. The Khasis have engineered the young roots of the Ficus trees on either side of gullies and brooks to grow through bamboos spanning the banks. The roots have taken hold on either side over years, forming a natural bridge; the famed — Living Root Bridges of Meghalaya. With time, stones have got lodged into the entwined roots. These bridges grow stronger with time unlike others; blending with the surrounding jungle landscape becoming a part of the scenery itself. There are many such bridges strewn across the forests of Meghalaya but the one at Riwai is the most easily accessible; the others requiring hours of trek through ancient trails known as the King’s Way. The King’s Way have kept the centuries old betel nut alive with the capital Shillong. The place also offers the village kids a natural pool to have a bath and splash about during the summers. It is a place of stunning beauty, with sunlight streaking down through the lush canopy amidst fluttering butterflies, the roots overgrown with moss and dangling creepers; an unique wedlock of natural bounty and human cognizance. 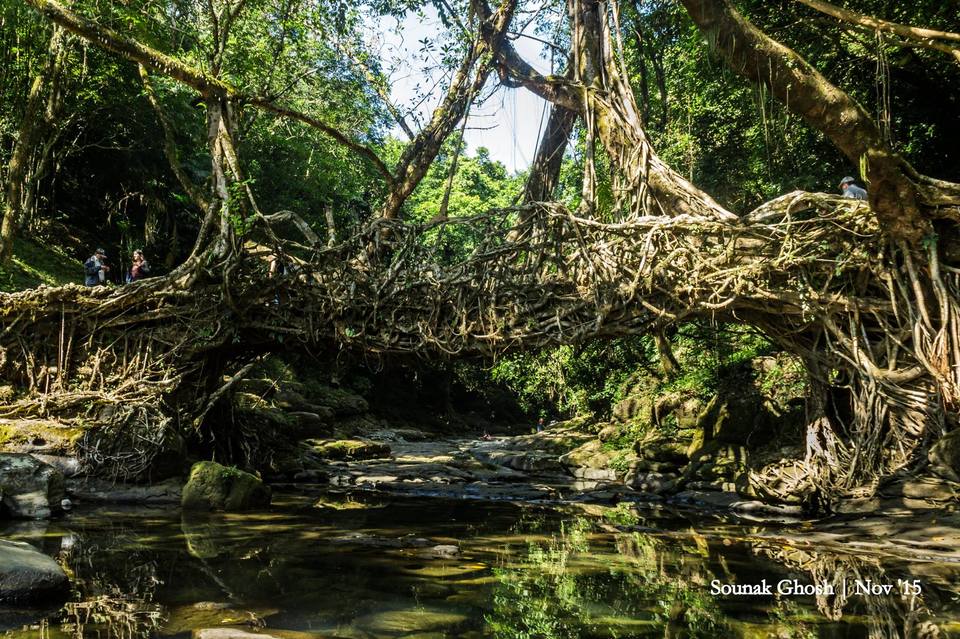 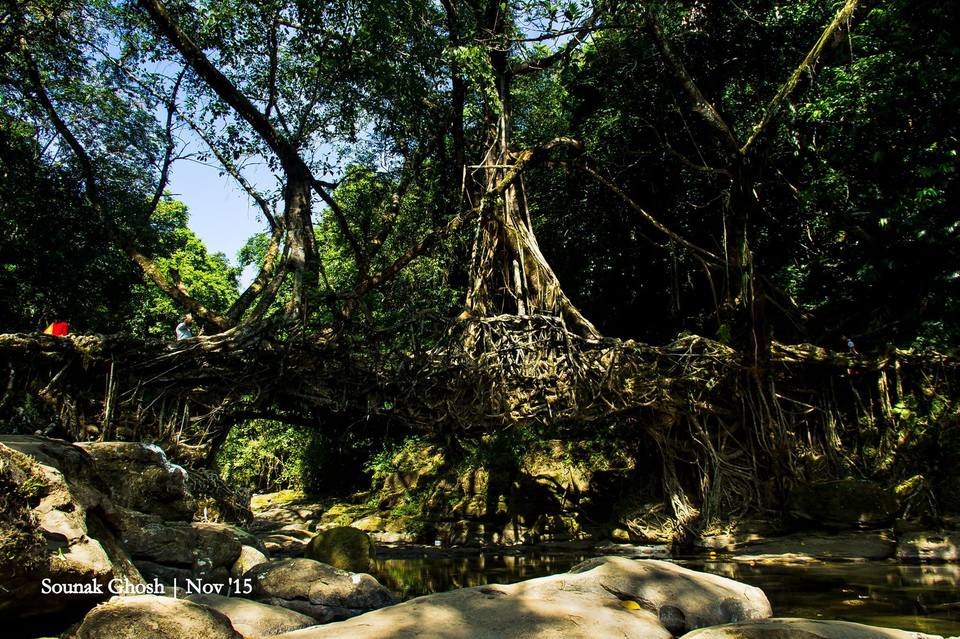 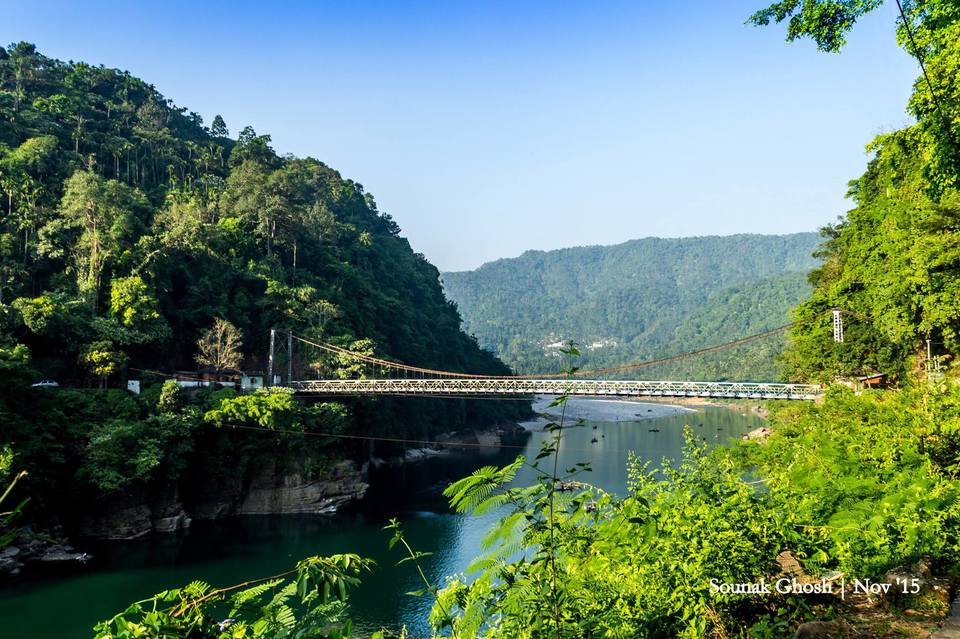 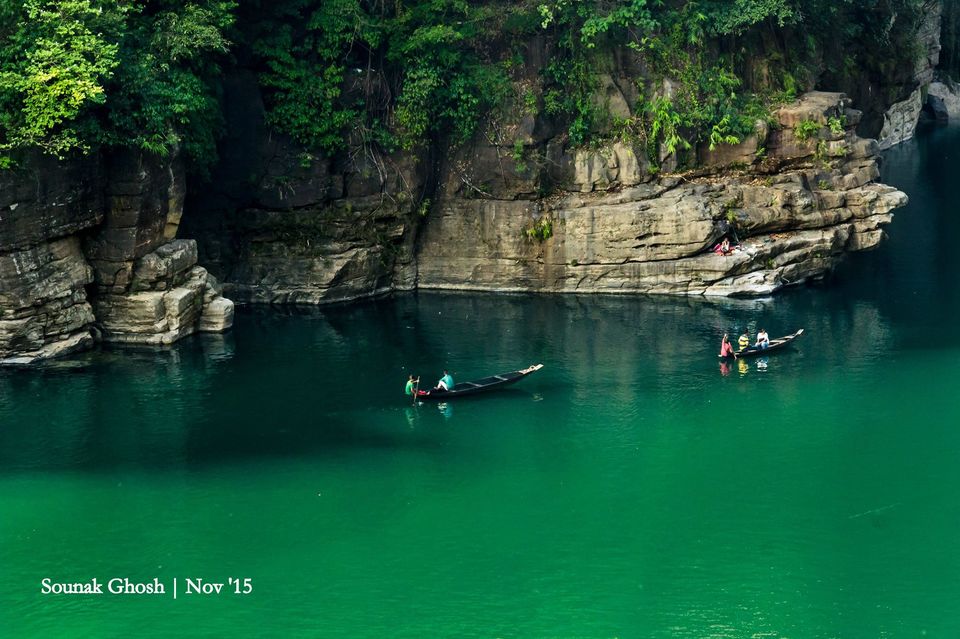 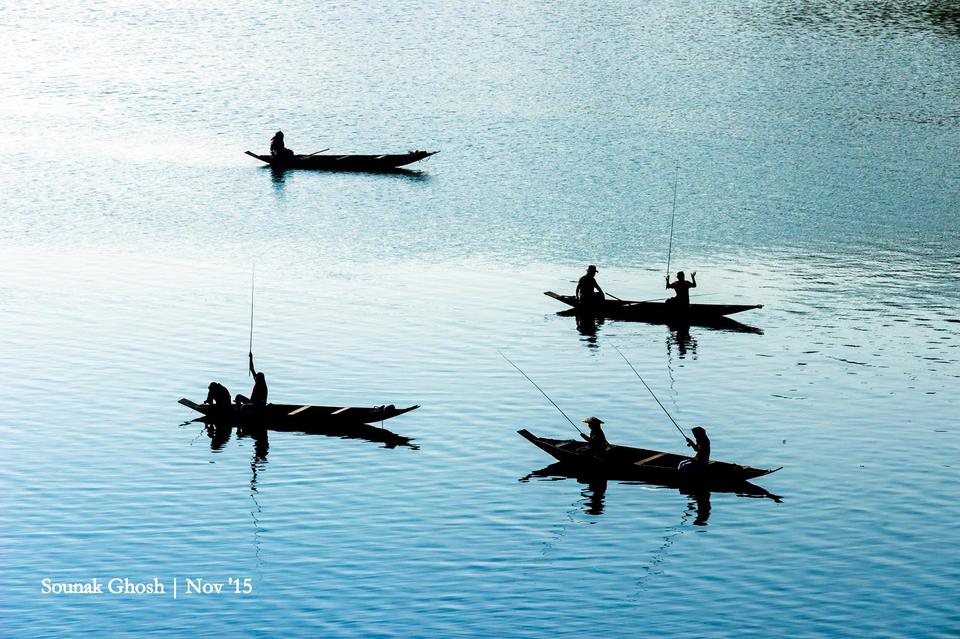 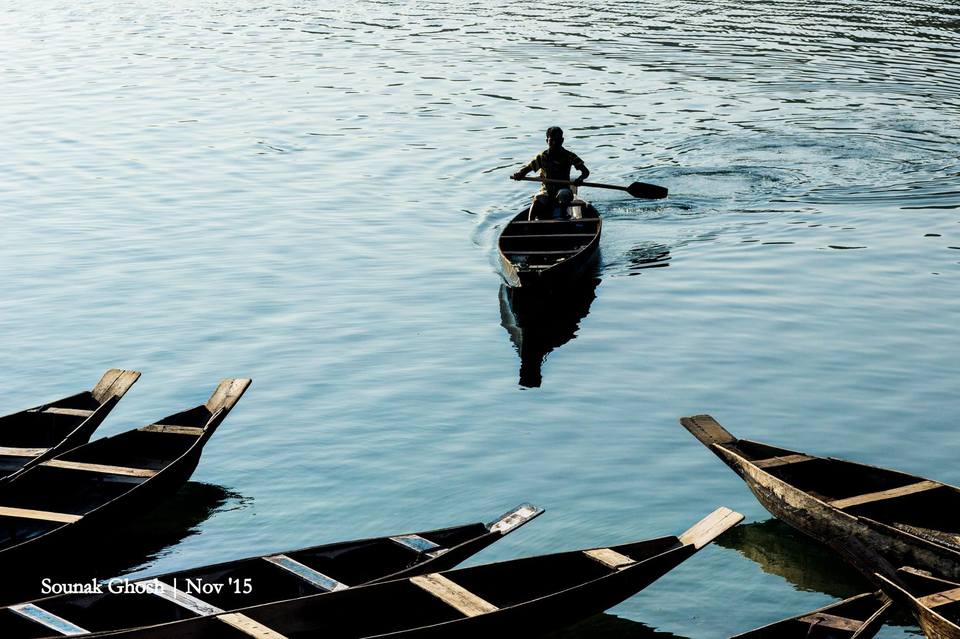 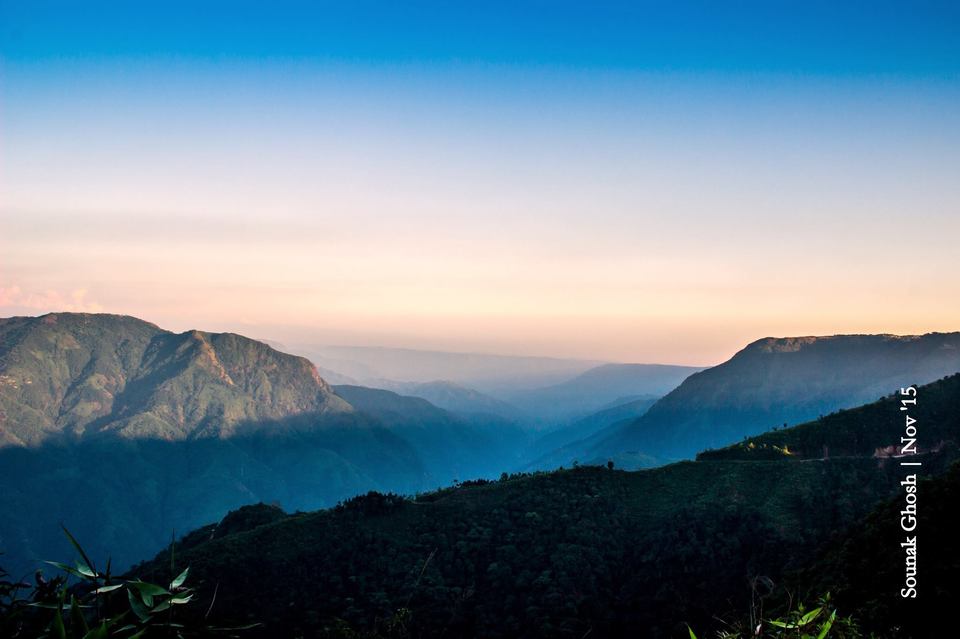 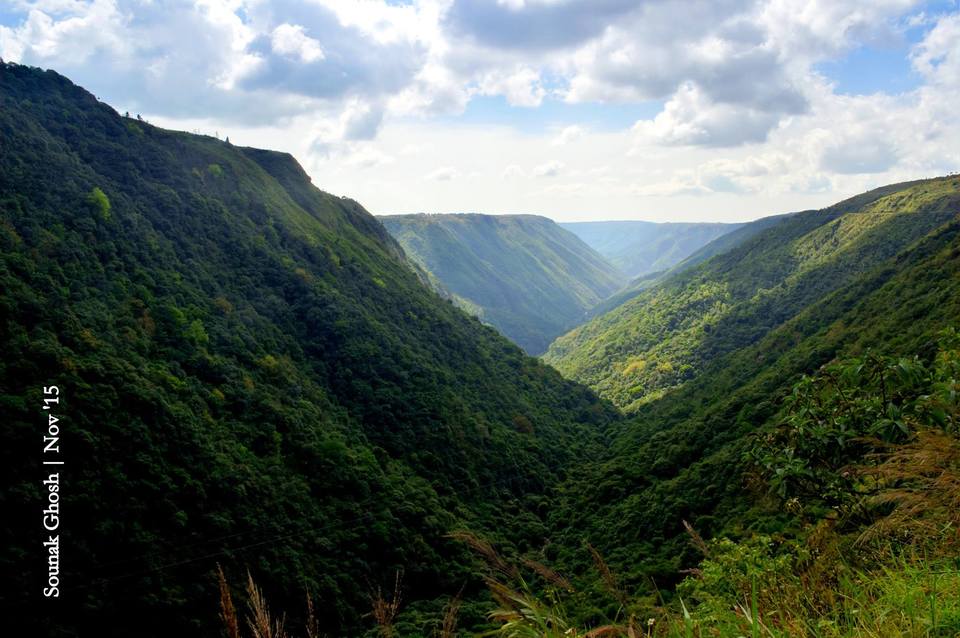 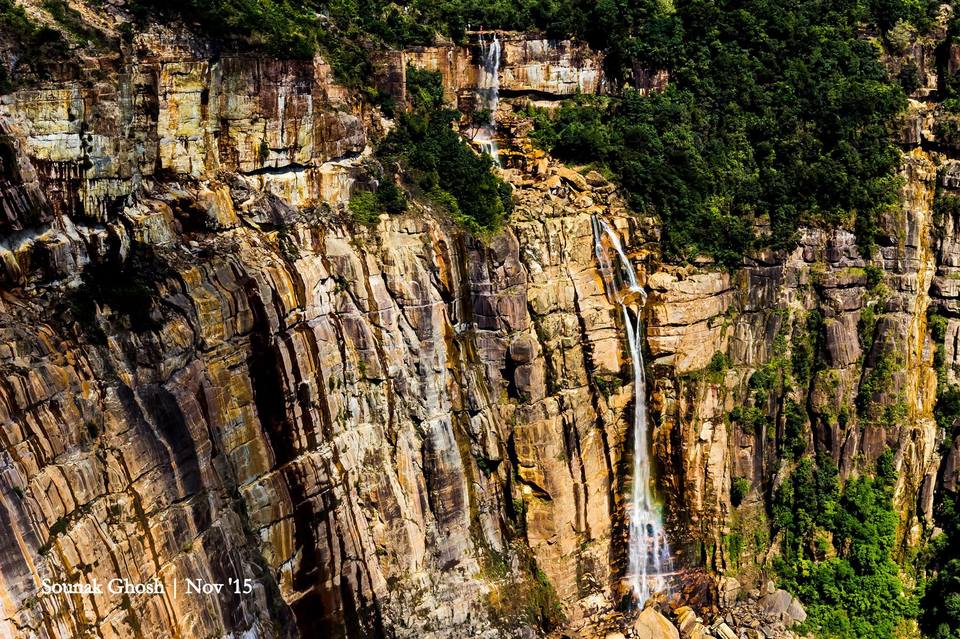 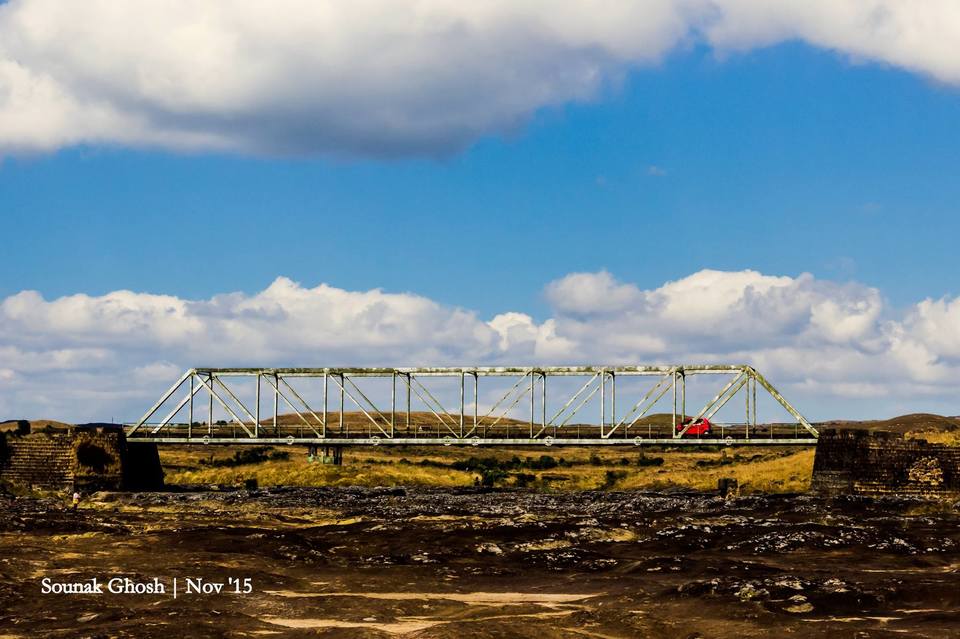 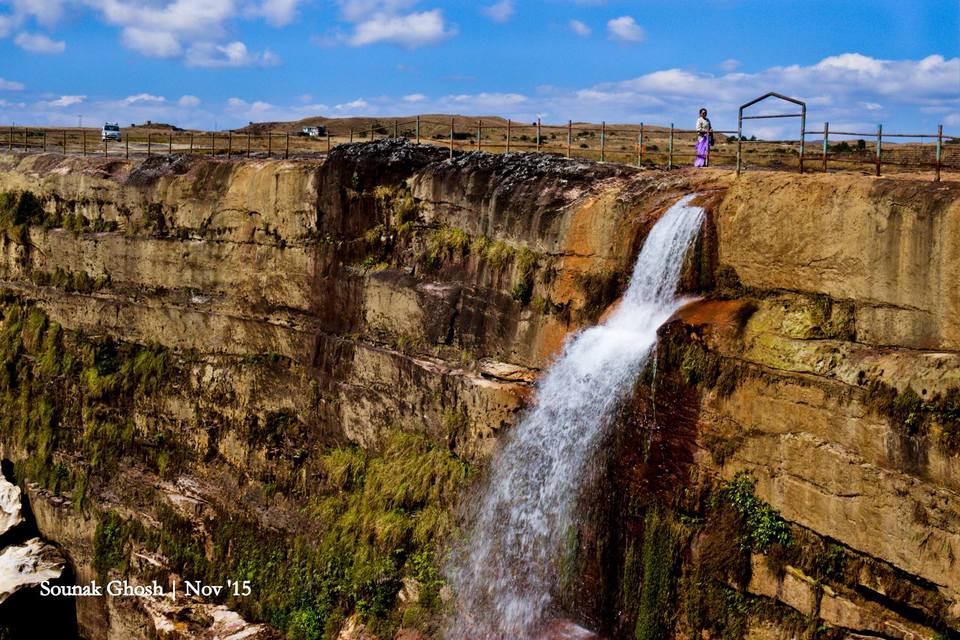 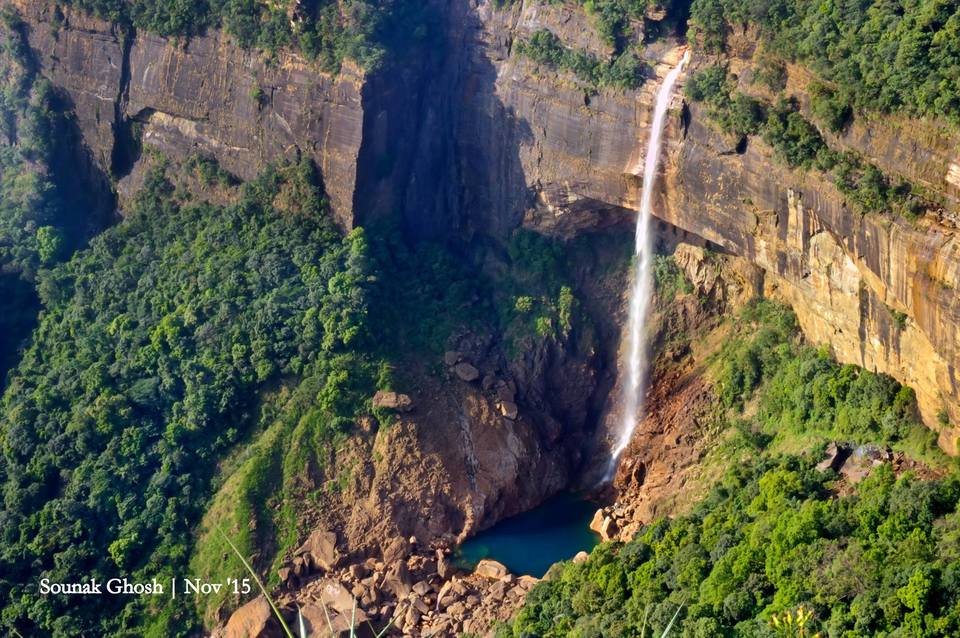 Day 1: Train From Kolkata to Guwahati.

Day 2: Reach Guwahati. Take a car for Shillong. There are numerous shared taxis available. It takes about 3 hours to reach Shillong.

Day 4: Day long Excursion to Riwai, see the famous Living Root Bridge before going to Mawlynnong, the cleanest village in Asia. The take the picturesque drive to Dawki. Return to Shillong.

Day 5: Set out early for Cherrapunjee. On the way, stop at the Mawkdhok view point for some breathtaking views. The first stop before Cherrapujnee is the Dain Thalen Waterfalls. The next destination is the Arwah caves before visiting the highest water falls in India, the Nohkalikai Falls. Then to the more famous, Mawsami cave. The last destination is the Nohsngithiang or the Seven Sisters Waterfalls. Return to Shillong.

Day 6: (for more adventurous souls) One may go to the Double Decker Living Root Bridges.

Day 6: Return to Guwahati. On the way, pay a visit to the Umiam Lake.

Day 7: Visit the Kamakhya temple. Board Train for Kolkata.

There are numerous hotels in Shillong, mostly at the Police Bazar area. There are many home stays as well,one of them is Russet Homestay.

By Air: The nearest airport is Shillong Airport, 40 minutes drive from the city. From Guwahati Airport it takes about 4 hours to reach Shillong.

By Railways: The nearest rail head is Guwahati. From Guwahati numerous taxis (shared as well as reserved) are available. It takes about 3 hours to reach Shillong from Guwahati Station.

By Road: Shillong is well connected by roads.

Can be visited throughout the year, but the best time to visit is during the monsoon from July to October.