The Venice of the East

Famously known as the Venice of the East or the City of Lakes, Udaipur was our first stop in a 6-day long trip of Rajasthan.

We arrived at the Maharana Pratap Airport in Udaipur very early in the morning. I was pleasantly surprised by how quiet and clean the airport was, which was expected considering this is a small, domestic airport with flights currently to and from only 9 Indian cities (we arrived from Delhi via connecting flight from Bangalore). There are plenty of Uber and Ola options available right outside the airport.

We immediately struck up a conversation with our Ola driver, who was more than happy to be chatty and shared his contact details with us after dropping us at our hotel. He ended up being our driver and guide on the second day in Udaipur, and even took care to drop us all the way to the boarding point for our bus to next destination, Jaisalmer!

We visited these places in above order which turned out to be a day well-spent, covering a lot of ground on our first day! 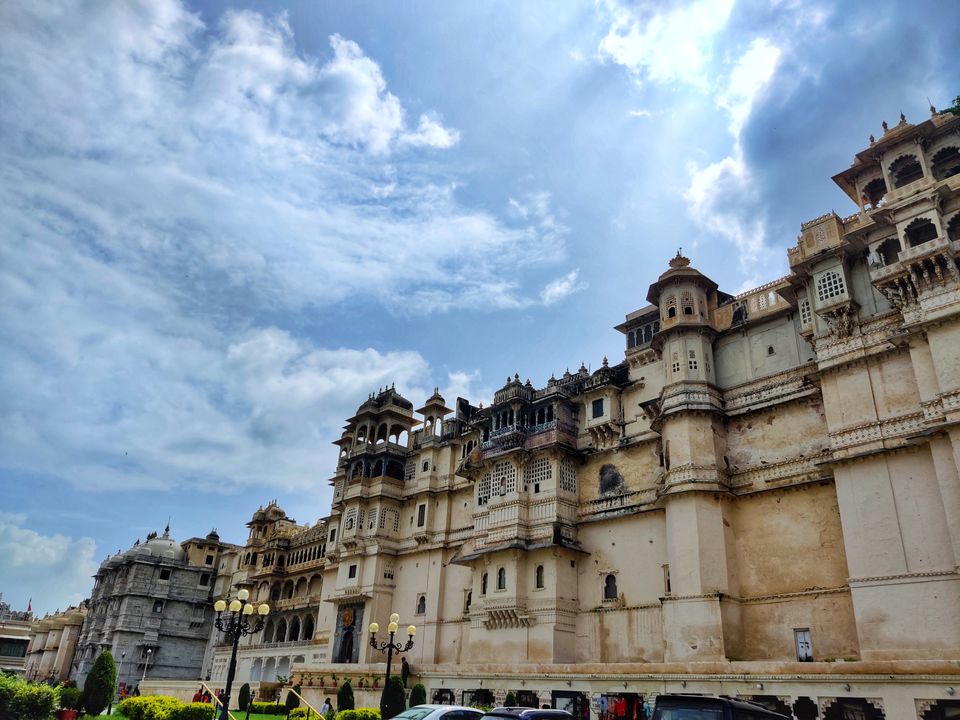 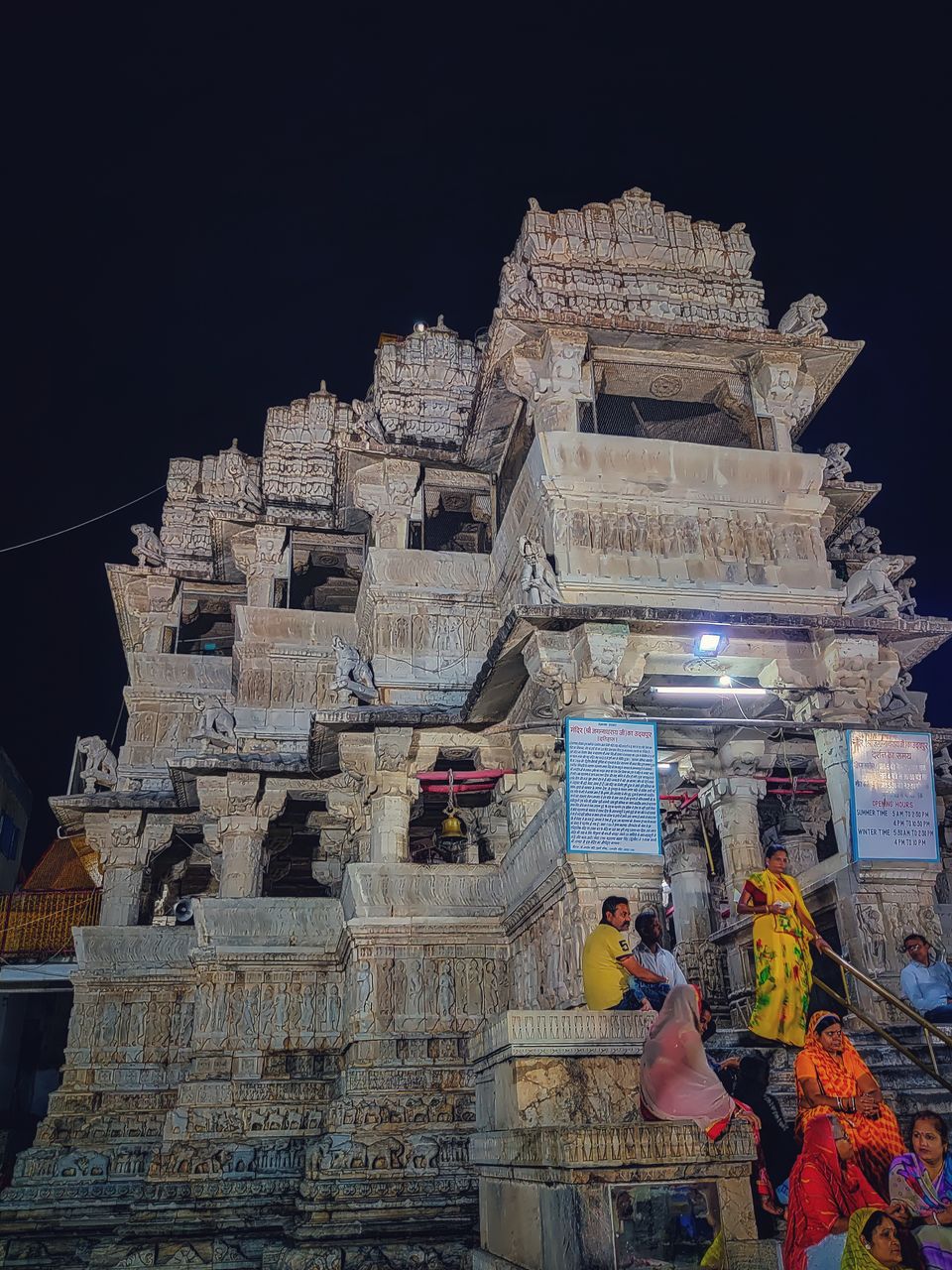 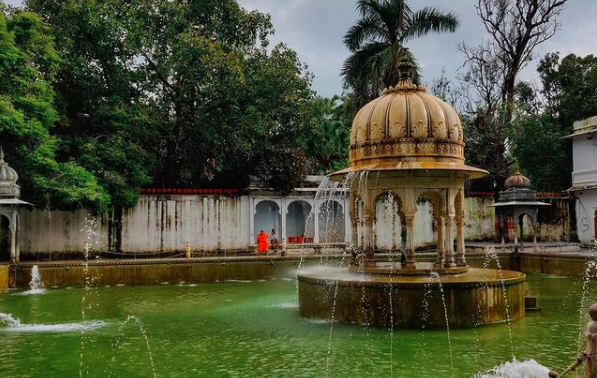 View of the observatory from the lake

The City Palace is located in the Old City of Udaipur on the banks of Lake Pichola. It was built by Maharana Udai Singh after the Mewars moved to Udaipur from Chittorgarh and established it as the capital and seat of power of the Mewar region. Since it’s inception, the palace has been altered many times over the course of several hundred years, with each ruler adding their own touch to the palace architecture.

Currently, there is part of the palace which has been converted into a heritage resort, a part which is open to public viewing and another secluded portion where the royal family still resides. We actually got lucky enough to spot a royal (‎Lakshyaraj Singh Mewar, son of Prince Arvind Singh Mewar) while in the City Palace!

Entry fee: Rs.300 (for entry to the palace, museum and courtyards)

There are tour guides available outside the palace with whom you can negotiate a price with to offer tours in English/Hindi.

The tour takes you around the palace to see the king’s quarters, the queen’s quarters (the Zenana mahal), other rooms/mahals that were used by royals where the walls are covered in beautiful tiles, complete mirror work or paintings, the courtyards and a museum housing items like royal jewellery, clothing, royal board games, kitchen utensils and the like. 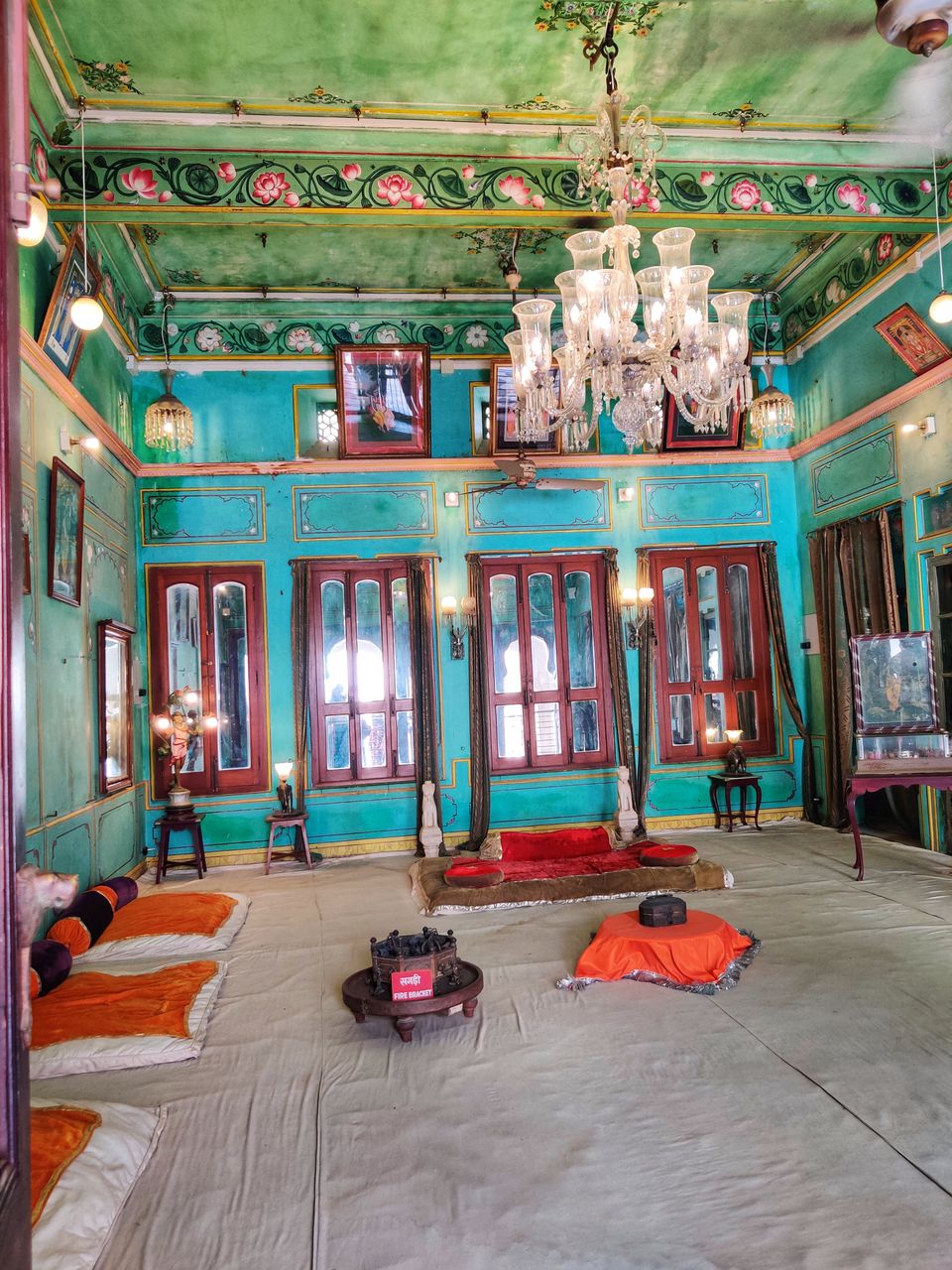 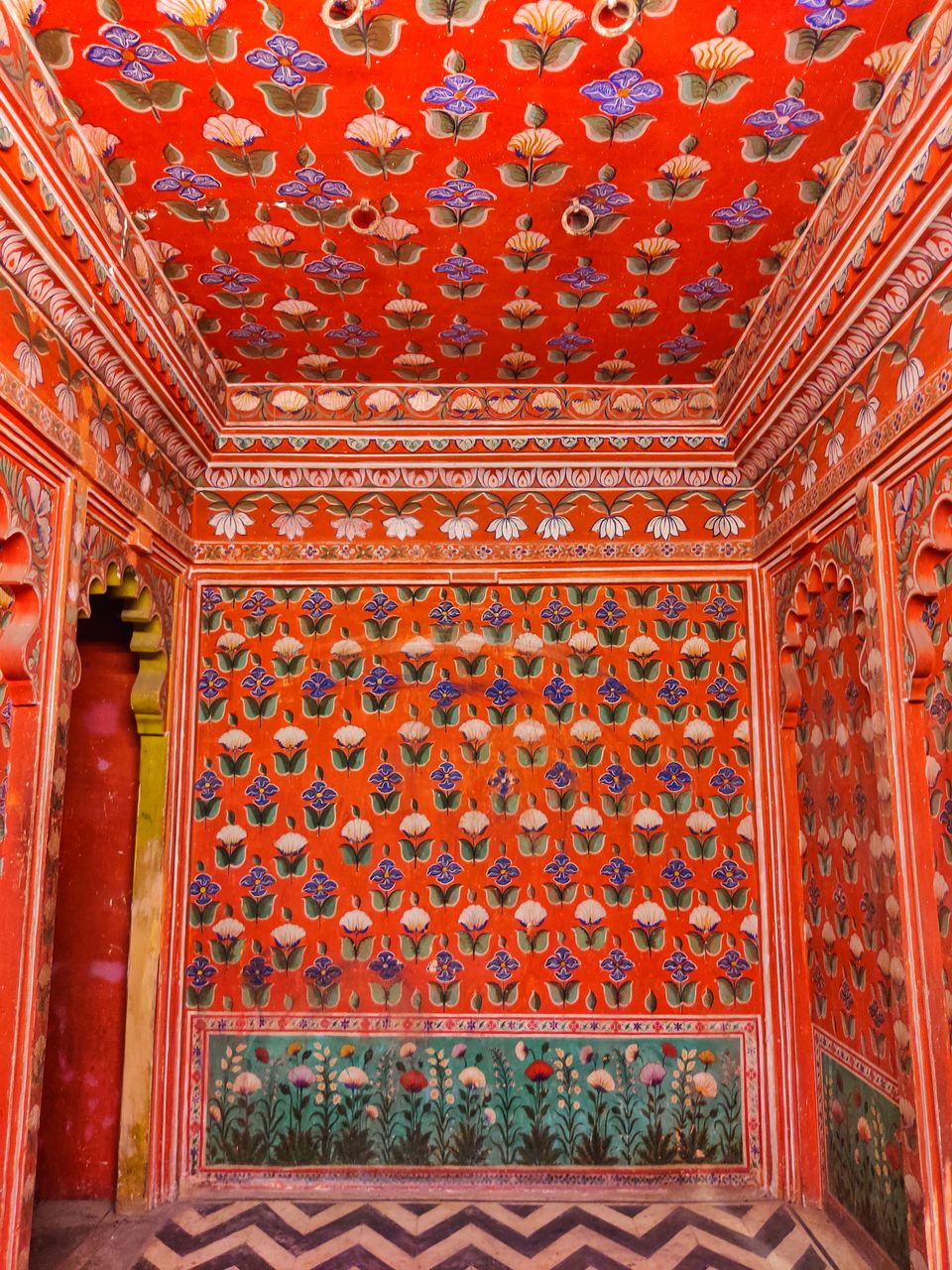 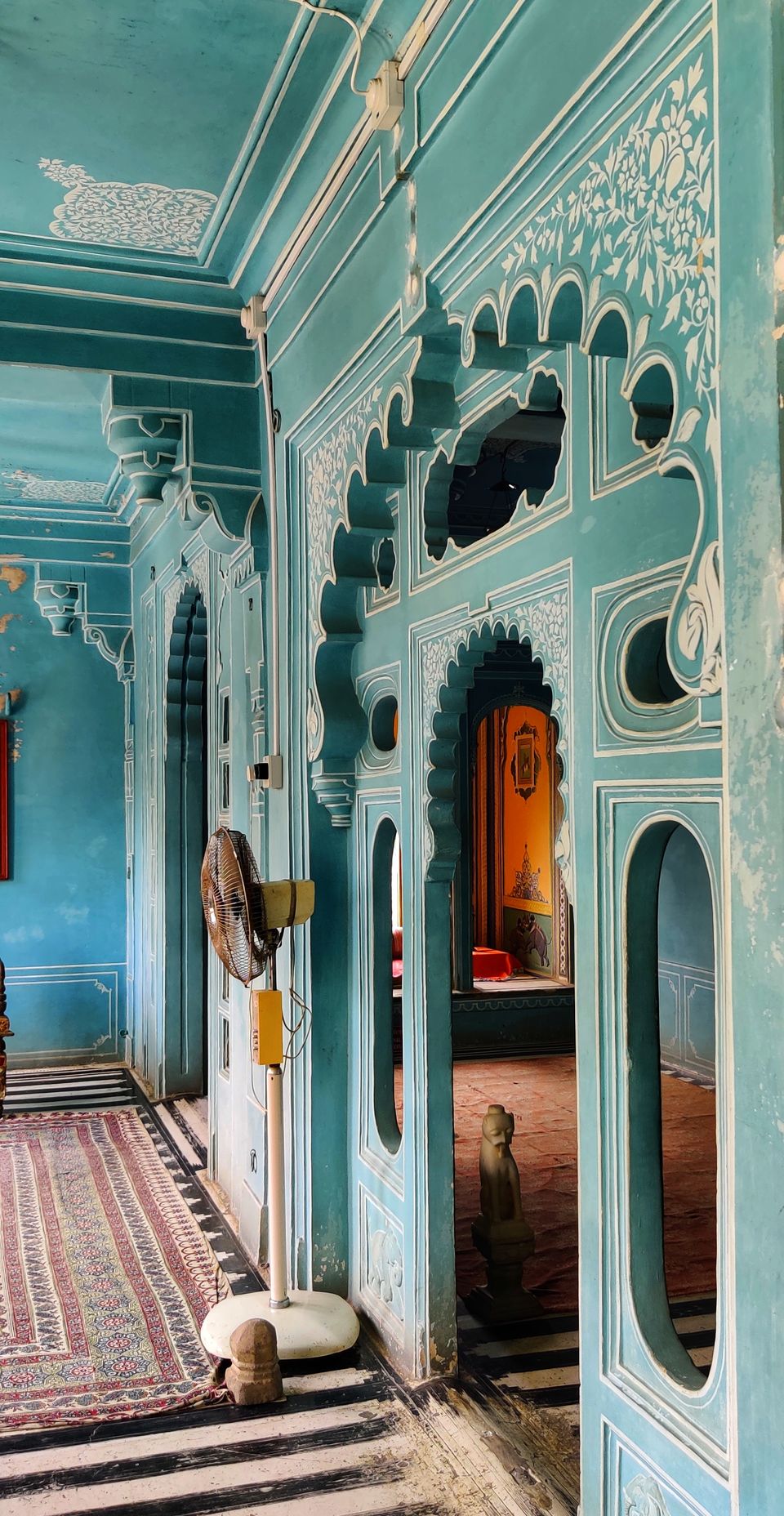 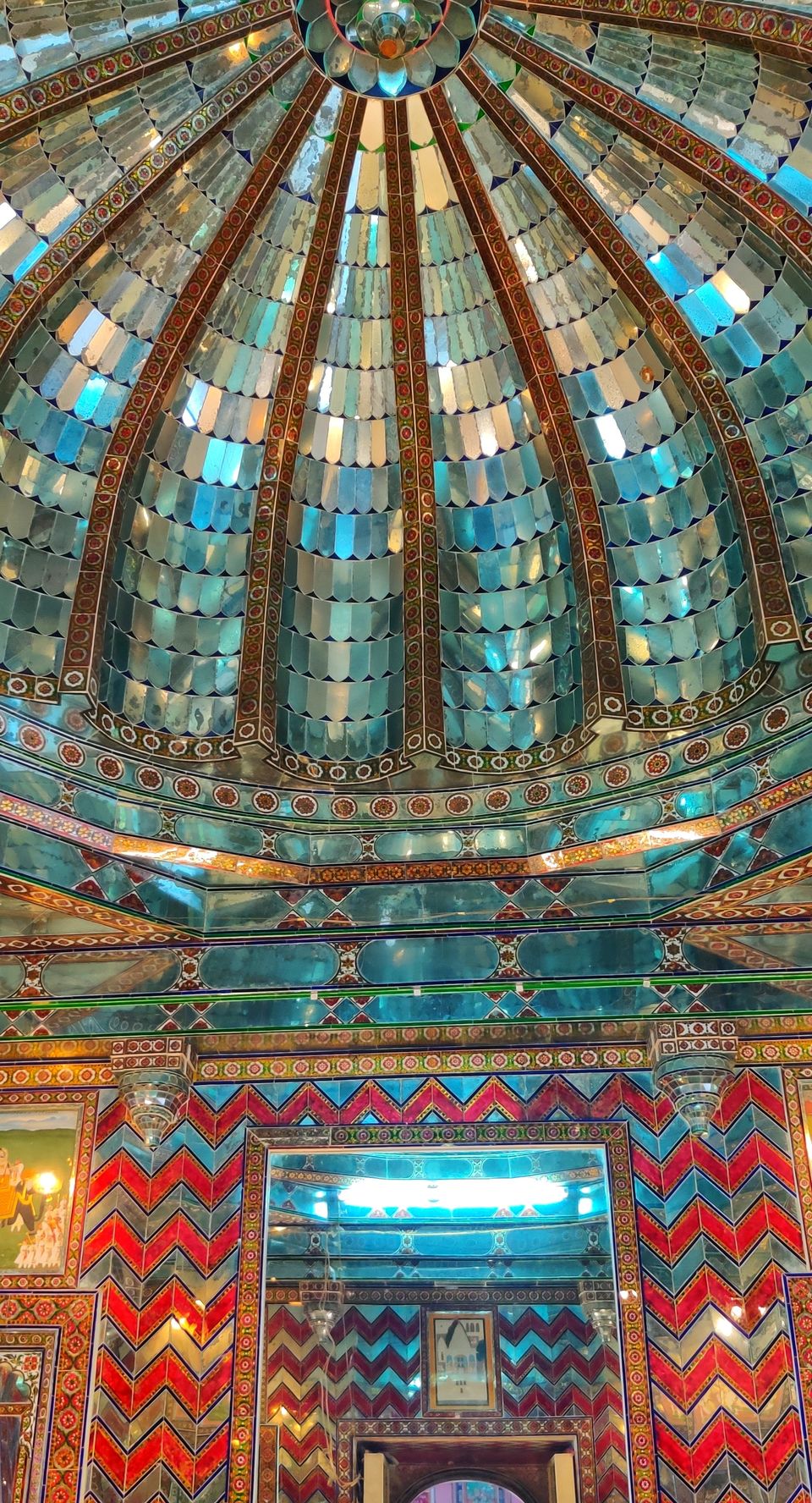 View of the City Palace from Lake Pichola 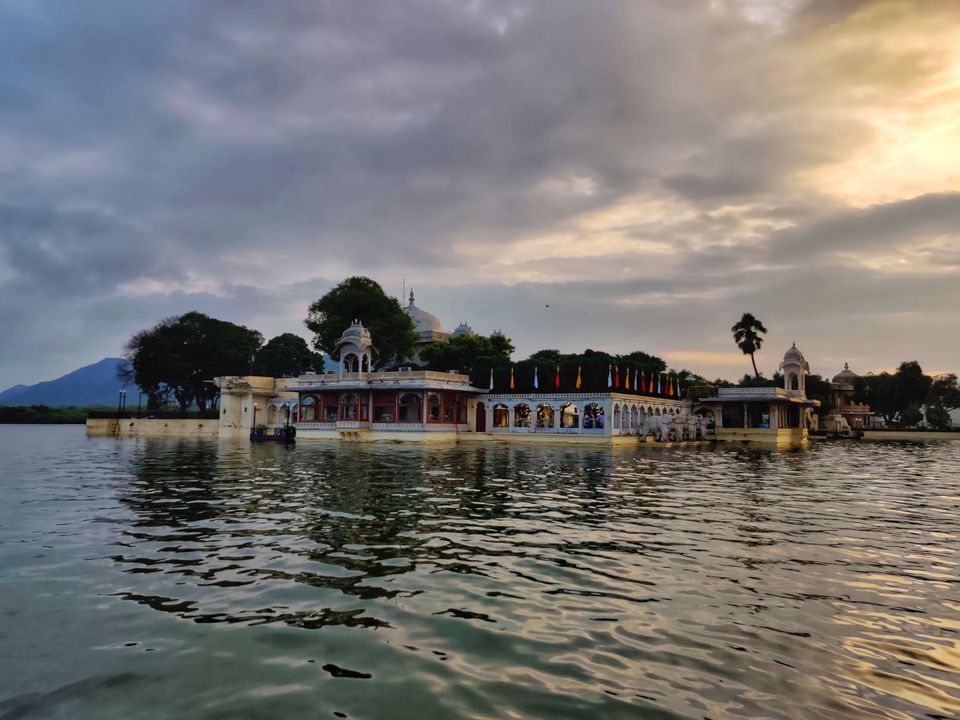 You can visit the Jagdish Temple on the way to the palace or while returning from it. The stunning marble architecture, with a richly carved façade, the calmness of the temple and the chants being performed are not to be missed!

Translated as ‘Garden of Maidens’, the Sahelion-ki-Bari is located very close to the Fateh Sagar Lake and was built for the queen and her maids to spend their leisurely time away from the palace.

Upon entering the garden, you see a beautiful pond surrounded by fountains and as you walk in, lush greenery surrounds you. An overall sense of calm settles in and you would see why this garden is very popular among tourists.

How to reach: Take an auto to the garden once you finish the City Palace tour.

Visit the Fateh Sagar lake around lunch time as there are several shops lining the banks of the lake offering a great selection of food. There is a boating facility in Fateh Sagar Lake which takes you around the lake and near the Udaipur Solar Observatory (disembarking from the boat and going inside the observatory is not allowed). We preferred to take the sunset boat ride around Lake Pichola so we skipped the boat ride here.

Lake Pichola is a large man-made freshwater lake, built centuries back to meet the drinking water needs of the people of Udaipur. There are several notable attractions and islands in and around this beautiful lake, some of which are, the City Palace, Jag Mandir, Taj Fateh Prakash Palace hotel, Taj Lake Palace hotel, Gangaur Ghat and Ambrai Ghat.

We were able to get a private boat just to ourselves and the boat was built very comfortably with couches. Taking a boat ride around this lake around sunset is one of the most magical things to do in Udaipur and the tour and took us around the lake and up close to some of the places such as Jag Mandir and Taj Lake Palace hotel.

There are some boat tours that allow you to disembark on the Jag Mandir and have a look around, but most boats only take you around the lake. You can get down at the Taj Lake Palace hotel only if you are a guest staying there.

‘Haveli’ typically means a mansion/stately residence of notable and distinguished members of the community. Havelis all around Rajasthan have now been re-purposed as tourist attractions, museums and heritage hotels.

Bagore-ki-Haveli is situated right on the waterfront of the Lake Pichola next to the Gangaur Ghat. 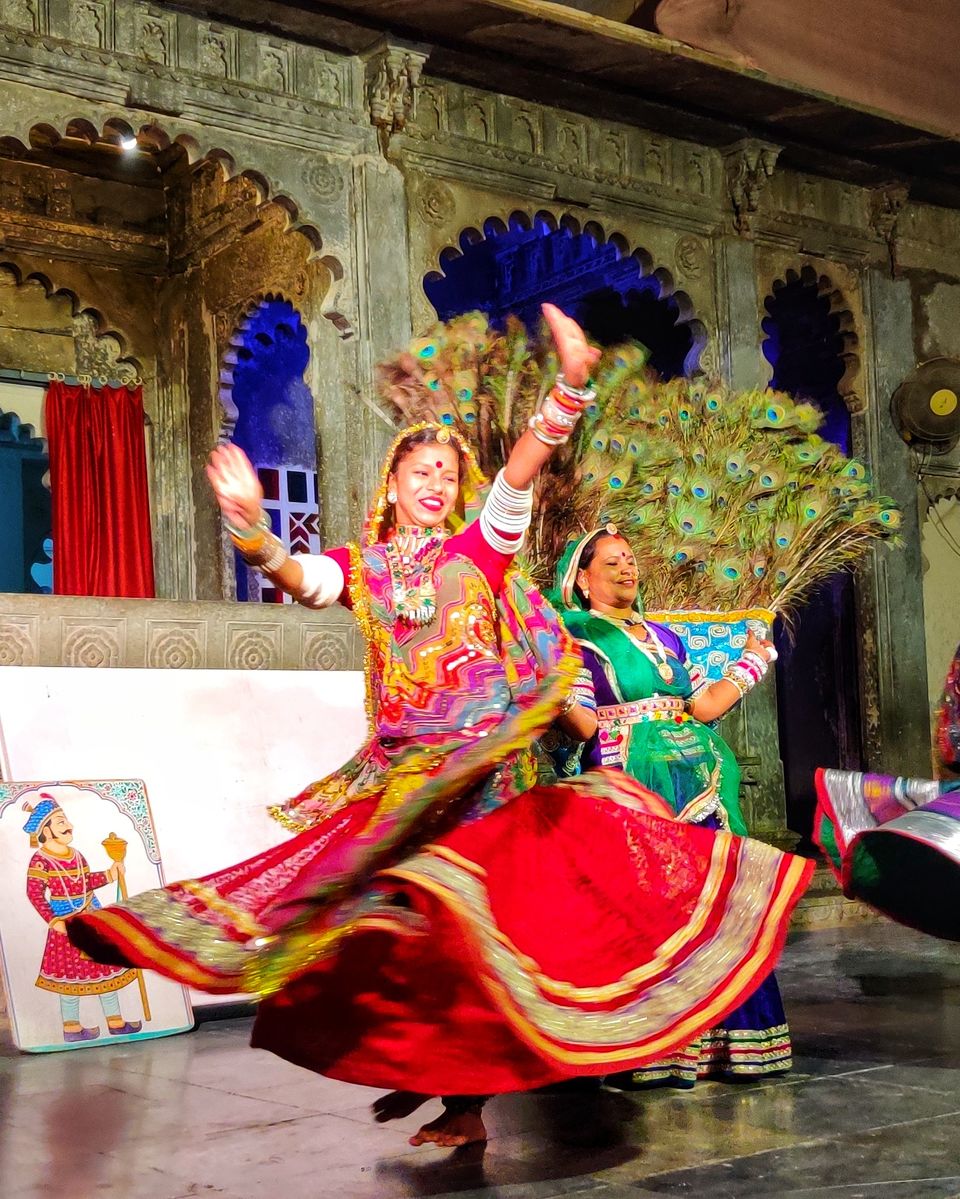 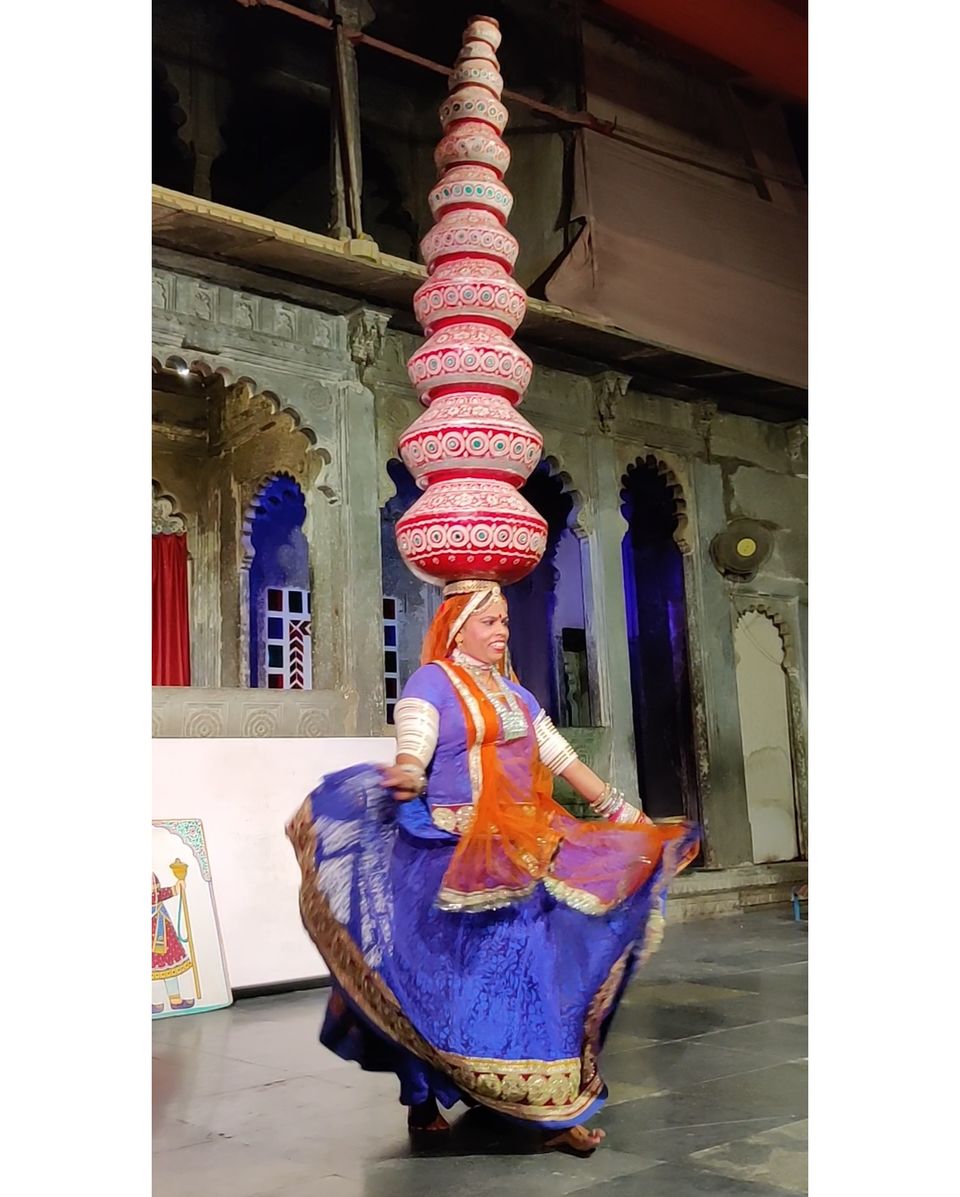 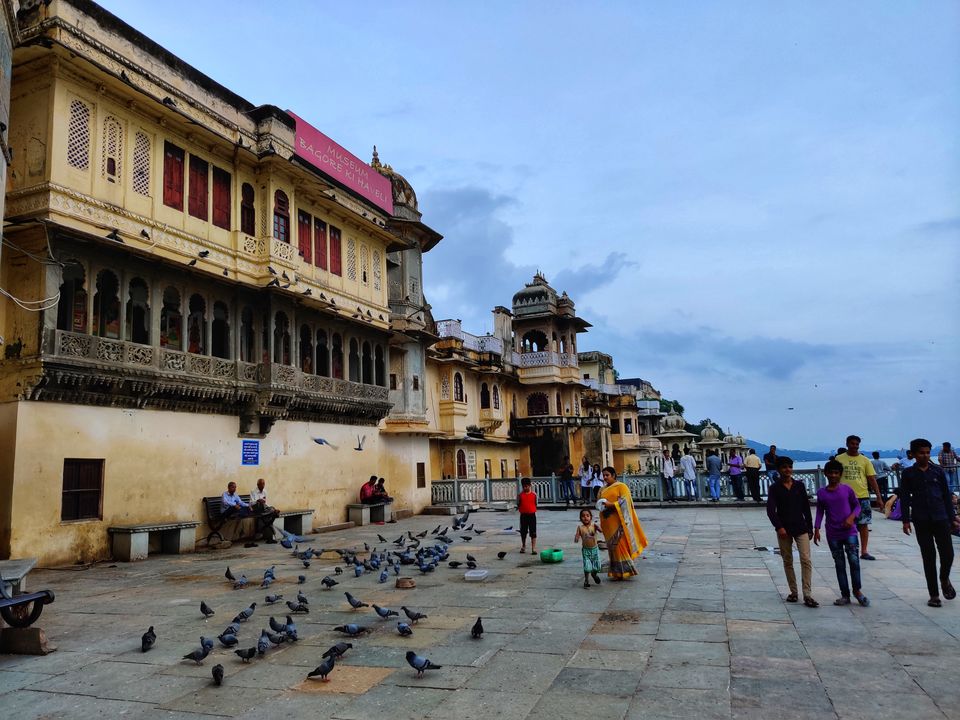 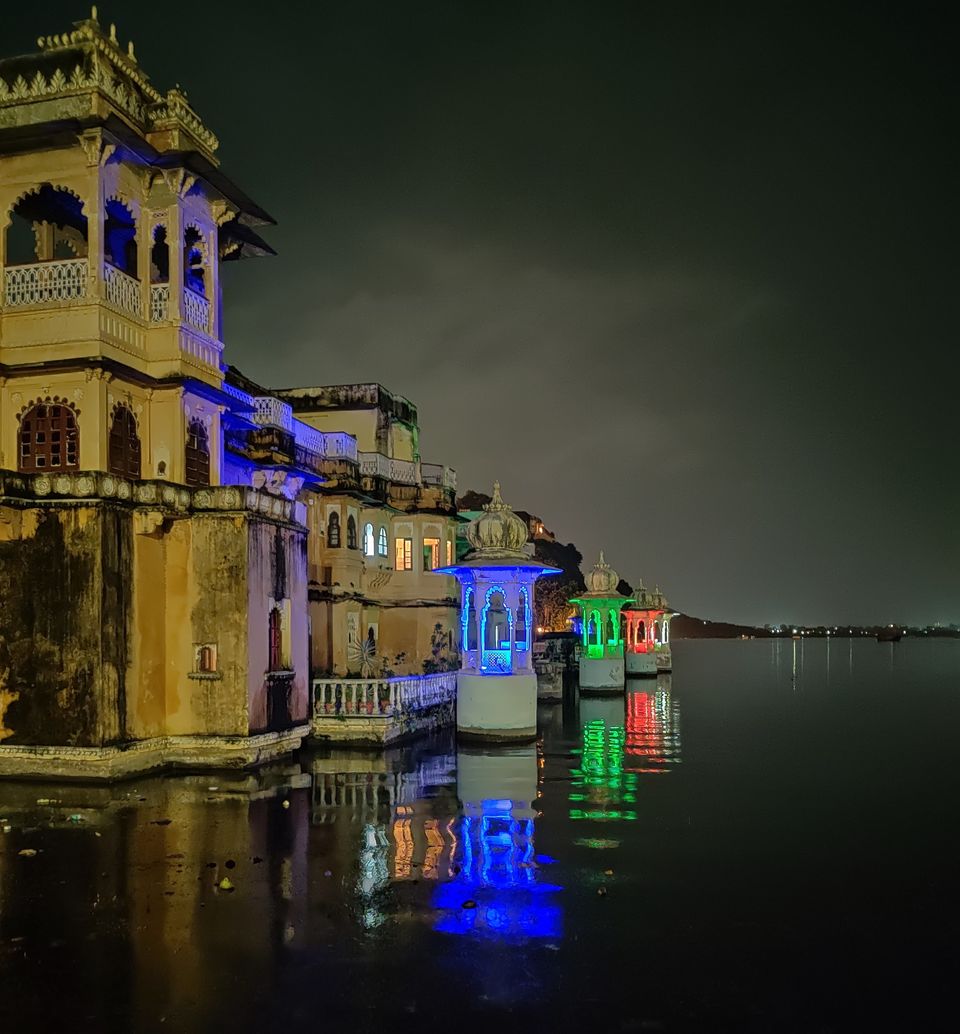 At twilight, the ‘Neem Chowk’ courtyard of this Haveli is lit up and transformed into a performance area for the Dharohar folk dance show.

Additional cost: Rs. 150 for photos/videos (a tag is provided and only those with said tag are allowed to take photos/videos)

Tickets are sold starting from 6 PM at the haveli entrance.

The folk show is a very structured program consisting of live music, singing, various forms of dance (Chari, Terha Taal, Gorbandh, Ghoomar, Bhavni), a skit and a puppet show, all of them showcasing the various cultures around the state of Rajasthan. This show is one of the main highlights of an Udaipur trip and I would highly recommend it to anyone visiting.

The Gangaur Ghat is the main ghat located on the waterfront of the Lake Pichola. It is named so since the processions during the famous Gangaur festival or Rajasthan ends at this Ghat.

On normal days, this ghat is great to spend an evening lounging on the steps leading to the lake, taking in the 180° view of the lake and enjoying the local street food sold at the ghat.

Where to stay in Udaipur -

Book your stay in the Old City area so that all major attractions are either at walkable distance or hardly a 15-minute auto ride away.

Kotra Haveli (booked on agoda.com) was a steal deal during the time we visited as it was the off-season and considering that it was such a beautiful place to stay. The rooftop of this hotel offered a great view of the City Palace and the Jagdish Mandir.

How to reach: Private Taxi

We were lucky in the sense that our Ola driver from the Udaipur airport the previous day offered us a day tour from Udaipur, right from hotel pickup till drop to the bus boarding point, at a very nominal price.

The drive from Udaipur to Kumbalgarh fort is so picturesque that it is a whole trip in itself, passing through villages and abundant greenery in the Rajsamand district.

The massive Kumbalgarh Fort was built by Rana Kumbha; it is a UNESCO Heritage Site and the second largest fort in India after the Chittorgarh Fort (the fort from the movie Padmaavat). Also known as the Great Wall of India, this fort has walls that are at least 15 feet thick with the fort walls stretching to a whopping 36 kms. This fort wall is so renowned so much so that there is a Heritage Walk organized every year to promote tourism.

View from the Badal Mahal

Temple located inside the fort complex 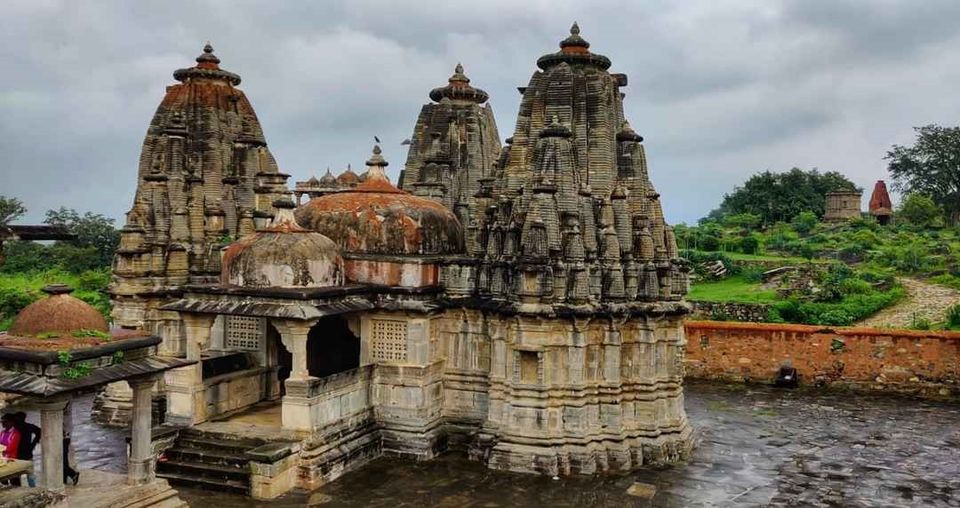 There are seven pols/gates that lead up to the main palace inside the fort. A major highlight in the palace area was the Badal Mahal which was located at the very top with stunning views all around. True to its name, quite literally, we were able to see clouds up and close at the Badal Mahal and if we were to reach out a hand, we would have been able to touch them.

We were very lucky to experience rain while on our visit to this fort. While rains can put a damper on plans, the fort looked all the more beautiful after the rain had washed away.

Other Places to see in Udaipur

Other Day trips from Udaipur