Aarti is a travel consultant, so all I had to worry about was to drive and rest everything was taken care by her i.e. Visa’s, route planning, hotel booking etc.Hunt for our vehicle started, Aarti wanted a Range Rover, however internet was against it as were most of our friends, they all wanted us to take a Toyota. Opportunity knocked our door in the shape of a friend, who owned a 2003 HSE 3.0L V6 and was confused for the last whole year whether he should sell her or not. She has been standing still for more than 6 months owing to a transmission fault (very common in 5L40E transmission). After knowing about our plan of world domination, he happily decided to part with his well-kept possession finally.We bought her in December 2013, a through check-up revealed a worn out radiator and a faulty 5th gear.I like machines in particular and can sense (I like to think so) if they are in a good shape or not! When I drove her for the very first time, I had a big smile on my face. Even thought she had clocked 144K, the BMW engine was butter smooth and effortless. And to check out if she can hold up well on long trips, we did the length and breadth of UK (from London to Scotland twice and once to Wales) on her and she never failed to impress us.Time was really running fast, we were already into August with flag off date sitting pretty at September 6, 2014. We still had to get the car fixed and make arrangements for the roof rack. Using references, we got in touch with the right guys who helped us prepare the car within weeks. Going back, if I could change anything, I would start on the car a little early giving myself time to test the fixes and how car responded to those changes.We got the car ready on September 5th, yes a day before our flag off date. The transmission was serviced but was still throwing an error and entering limp mode (incorrect gear ratio on 5th gear), however the power that was available to us in limp mode was not as low as it was before getting the transmission serviced.We had an amazing flag off by our friends on September 6th, 2014 and after experiencing jaw dropping landscapes, picturesque mountain ranges, amazingly warm and helpful people, we reached Jammu on November 15th, 2014."Traveling - It leaves you speechless, then turns you into a storyteller"- Ibn BattutaThis is Aarti’s favourite quote and she would always mention this whenever and wherever and now when the road trip has been completed, it finally made sense to me.

Day 1: London To Paris[Written By Aarti]Finally the day came. We have not slept for more than 2 hours in last 24. Absolutely hectic but the thought of visiting 28 countries is keeping us super energetic. Oh! Did I tell you that we are also moving to US for good so we had to pack all our bags, vacate the house and arrange sea freight from UK to USA as well. So we had two jobs at hand – Moving from one continent to another and our BIG Roadtrip planning!!Saturday morning came and we got up at 8 am, started loading our car and pasted the car stickers.Now was the time Dhanno had dreamt all her life, she looked very beautiful with all the accessories fully loaded! Few of our friends and Kapilians joined us at Priya’s Tandoori (Bath Road, London) for the last supper. We had Paranathas (Oh!! This place is heaven and best for Paranathas just in case you are in London and want to try) and after that we did our last good byes and they all flagged us off (bit of cry and those emotional hugs – You know what I am taking about). Surely we were sad but had to say good bye with a heavy heart to all of them.I bought euro tunnel tickets a week in advance which came around for GBP 79.00 one way. We decided to choose this boring journey because we wanted to cross the country ASAP. We were running late to reach Euro Tunnel, as they wont allow you if you are late and any last minute ferry tickets, they can be quite heavy on the pocket!Euro tunnel takes only 35 mins from Folkestone to Calais as compared to Ferry from Dover to Calais which takes roughly 2.35hrs. Our Euro tunnel departed at 15:50 hrs and we are in France at 16:35. Wohoooo!!!And as we entered the first leg of out journey i.e. France, driving pattern changed. I am not so comfortable driving on the opposite side and i have been doing all of the travel planning, so it comes down to my personal driver i.e. Akhil Pathania to display his skills .. he heNow, we are on right side of the road while our steering is also on the right side, double whammy .. init!We took our first pitstop in Paris, staying at Akhil’s old mates and it was an absolute pleasure meeting them In France. Thanks Priya Soni & Pankaj Singh :-)As we crossed Arc-De-Triomphe roundabout, our GPS screamed “Take the 7th Exit”, we were like did I hear that rite. Yes 7th exit! Something not very common in UK/USA/INDIA. By the end of our first day, we strongly believe, had this been UK, we would have received 2 penalty tickets at least – Let’s see if they send us tickets to UK :-) 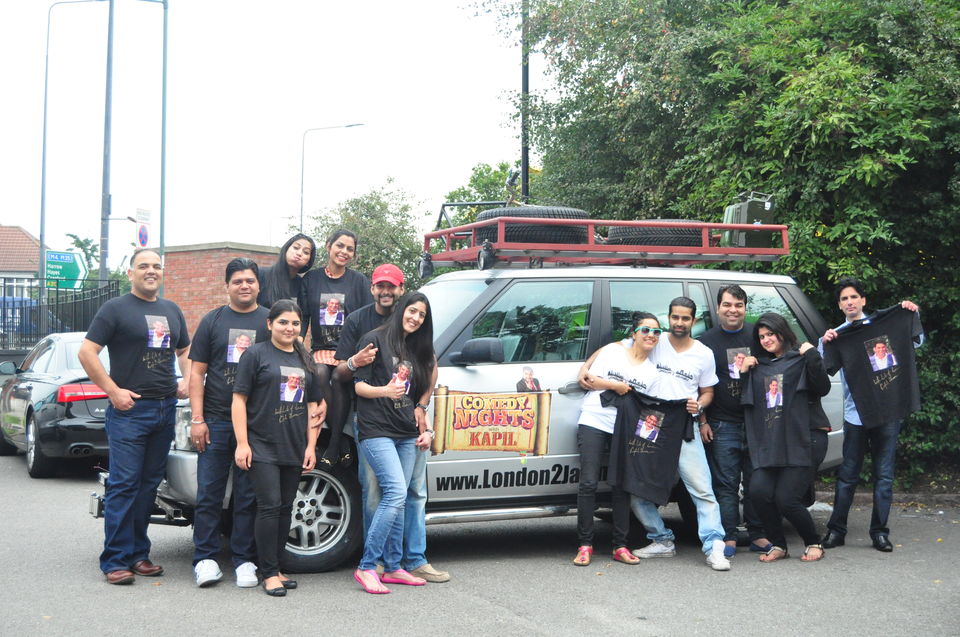 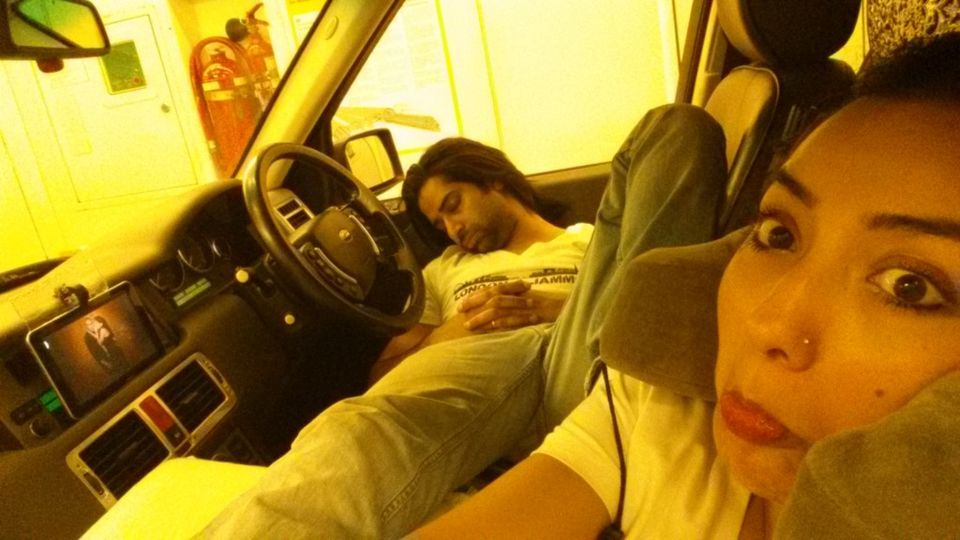 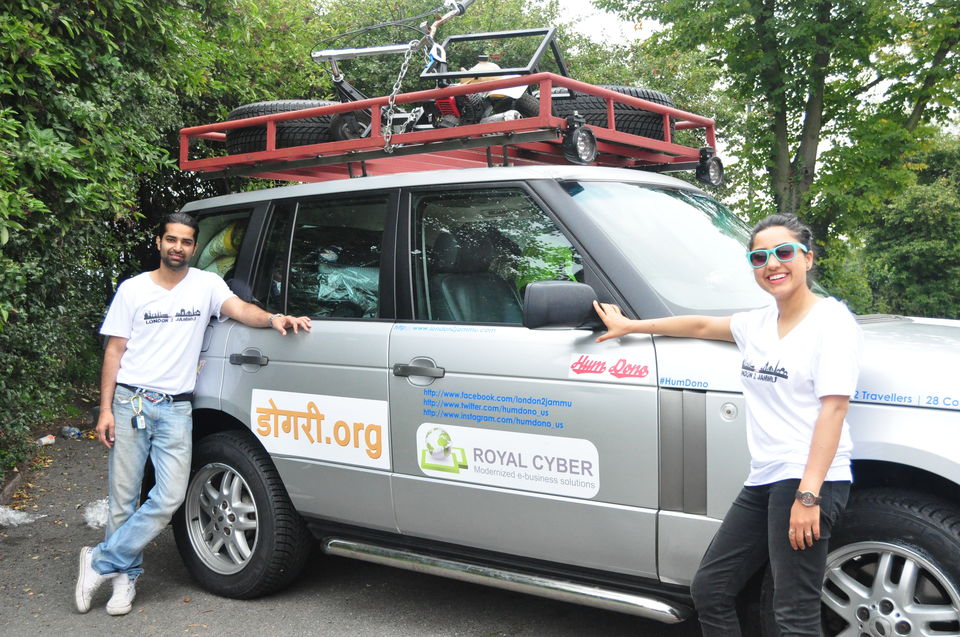 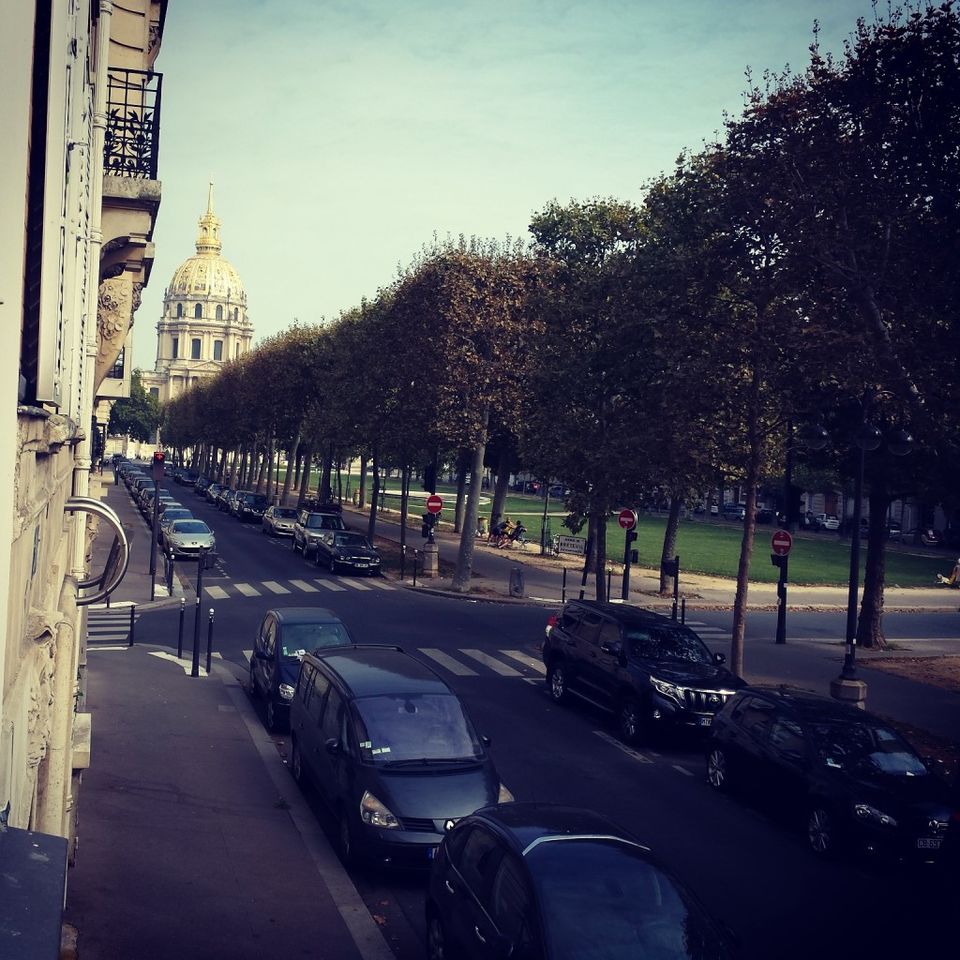 Day 2: Breakfast in Paris, Tea in Luxembourg & Dinner in Belgium[Written By Aarti]In the morning we had amazing crepes at Montparnasse (Creperie Josselin) and drove to Eiffel tower (captured few shots and met Kapilians) and then we drove off to Luxembourg around 2PM.Reached LUX by half 5. There is nothing much to see/do here, just roam around the city center and eat out. We had tea and decided to move on.Entered Brussels at night and had amazing Kadai Paneer, Chicken Curry with rice at friends place (Thank you Mrs. & Mr. Vijay Singh and the cute little Princess). This trip is actually giving us an opportunity to meet friends we had not seen in a long time and we are loving it :-) NOTE: You cross lots of tolls on the way. Since we had a roof rack as well, our car’s height is now 2.4 M roughly and at one booth we had to pay EUR 22.00 .. Wow! 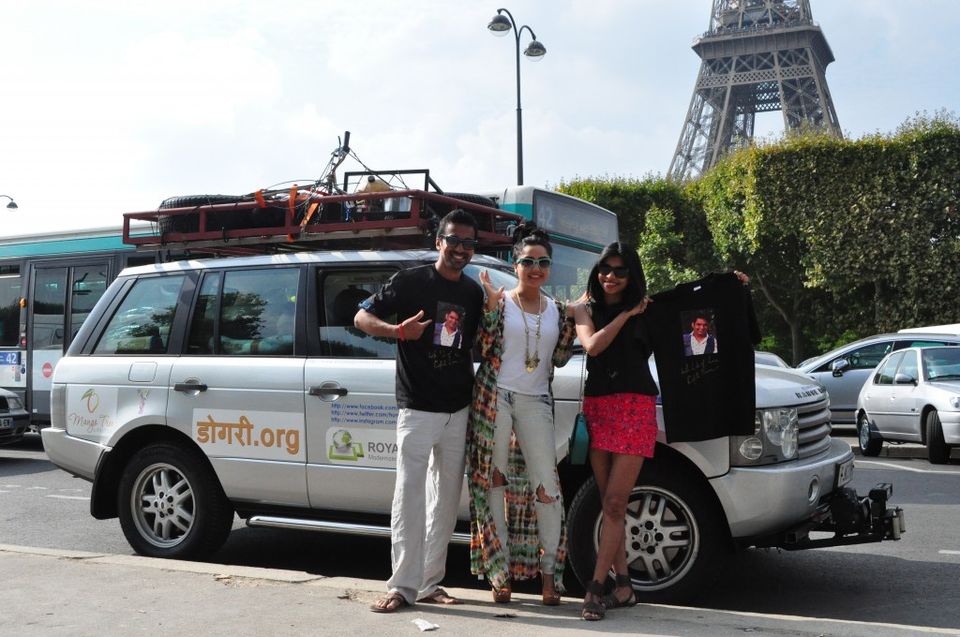 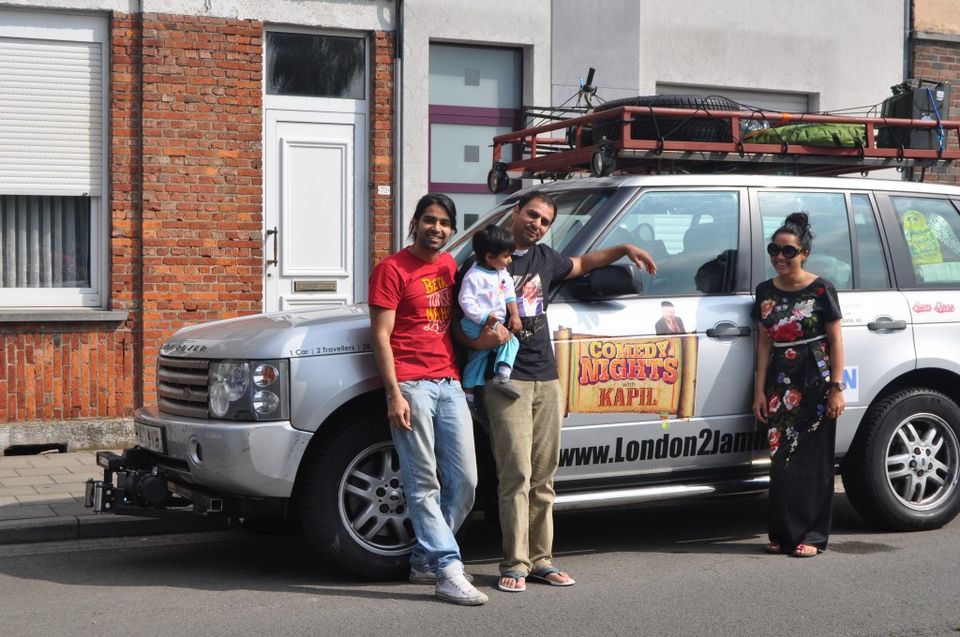 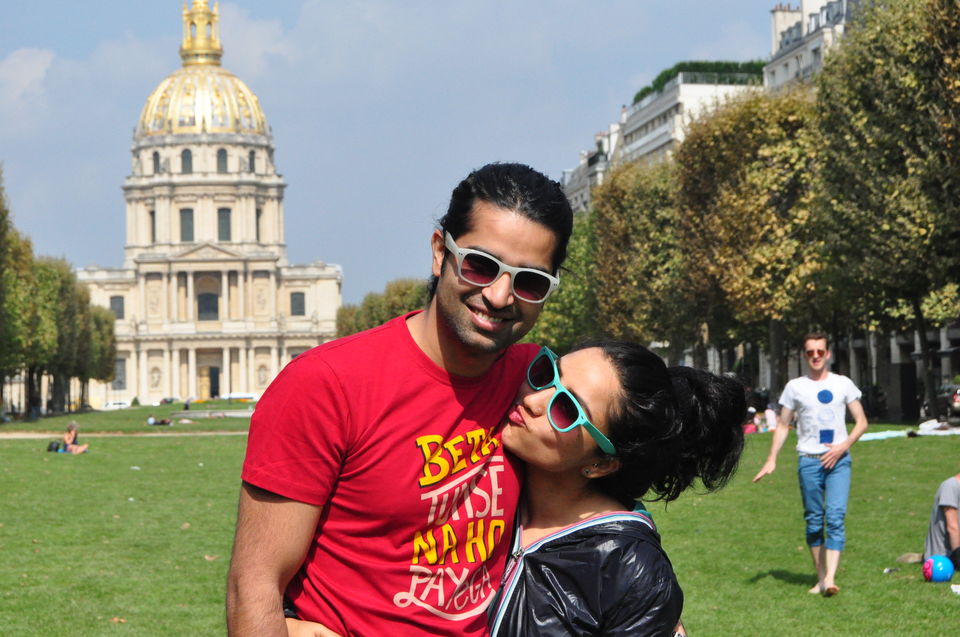 Day 3: Belgium & Netherlands[Written By Aarti]Its 9 in the morning, Akhil worked for few hours (remember we work from home) and then we grabbed a quick cup of Tea and decided to visit Grand Palace & Manneken-Pis. On the way we met a did the Grand Palace was full of Waffle shops and the fragrance .. Ummmm. We surely did not miss the opportunity and grabbed one :-)We strolled around Grand Palace, Manneken Piss, clicked few pictures, had a little drive around in Brussels city and then we started towards Brugge by 2PM.Brugge has been in my list for long time now. Especially after watching “The monuments Men”. If you have seen the movie, I am sure you know what I am taking about. “Ghent” and “Church of our Lady” both were in our list but due to limited time we decided to do just “Church of our lady”. We reached the museum but a little too late as the area was closed where “Church of our Lady” is kept 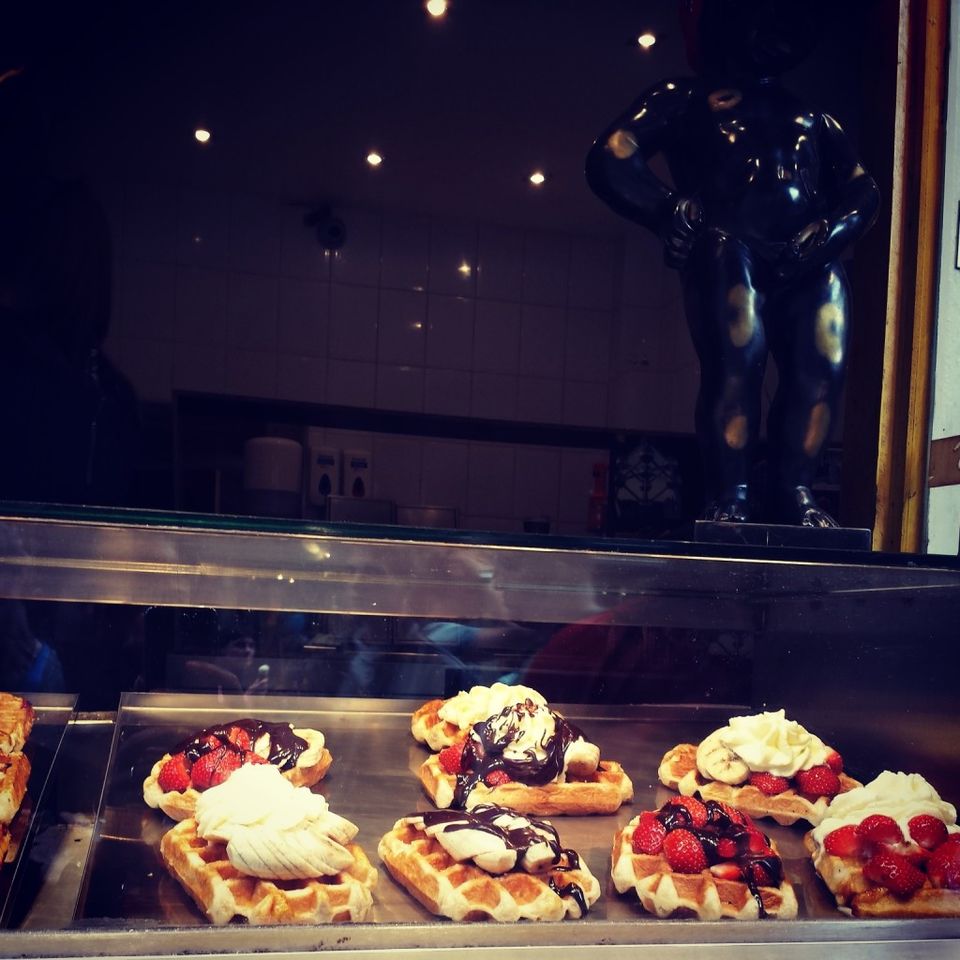 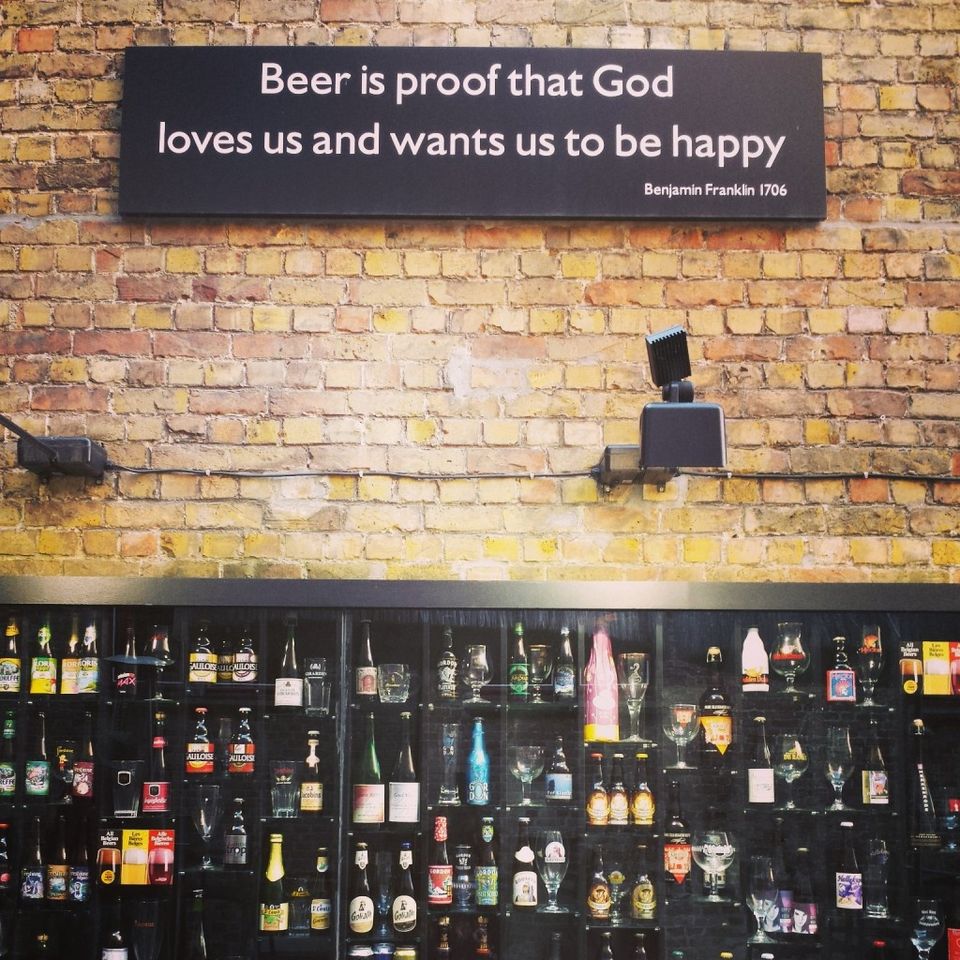 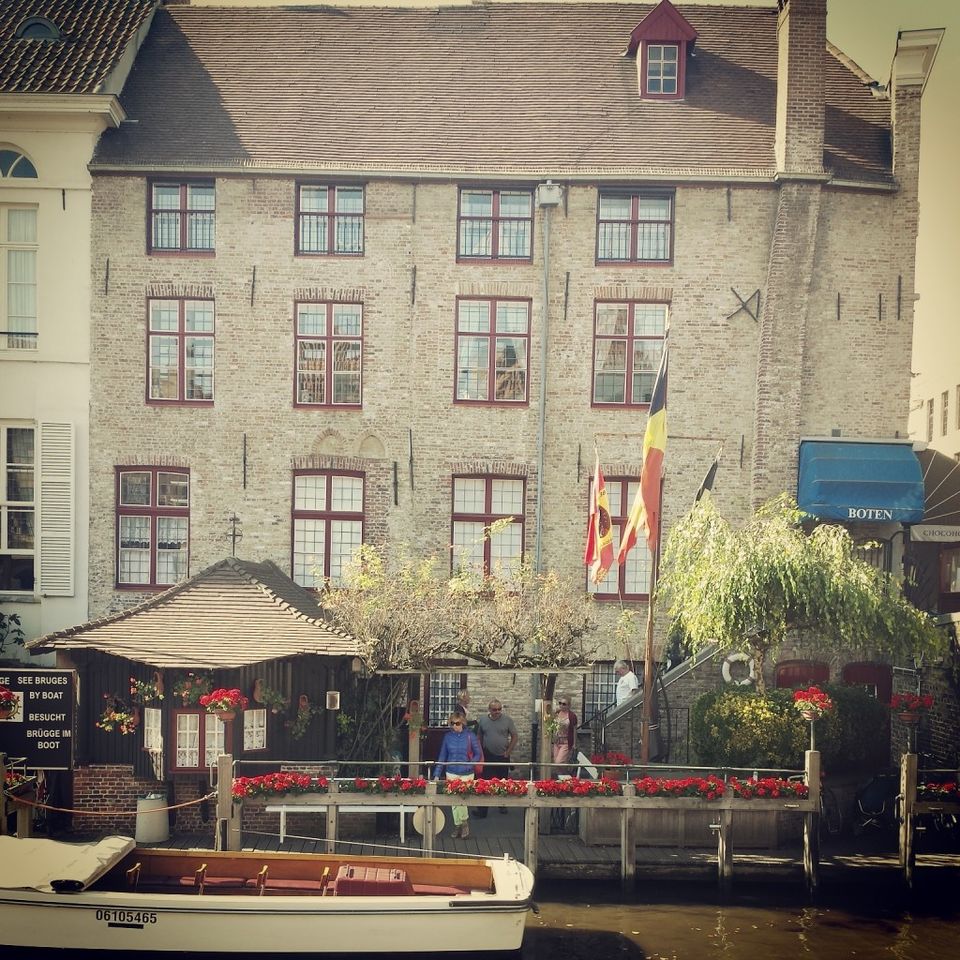 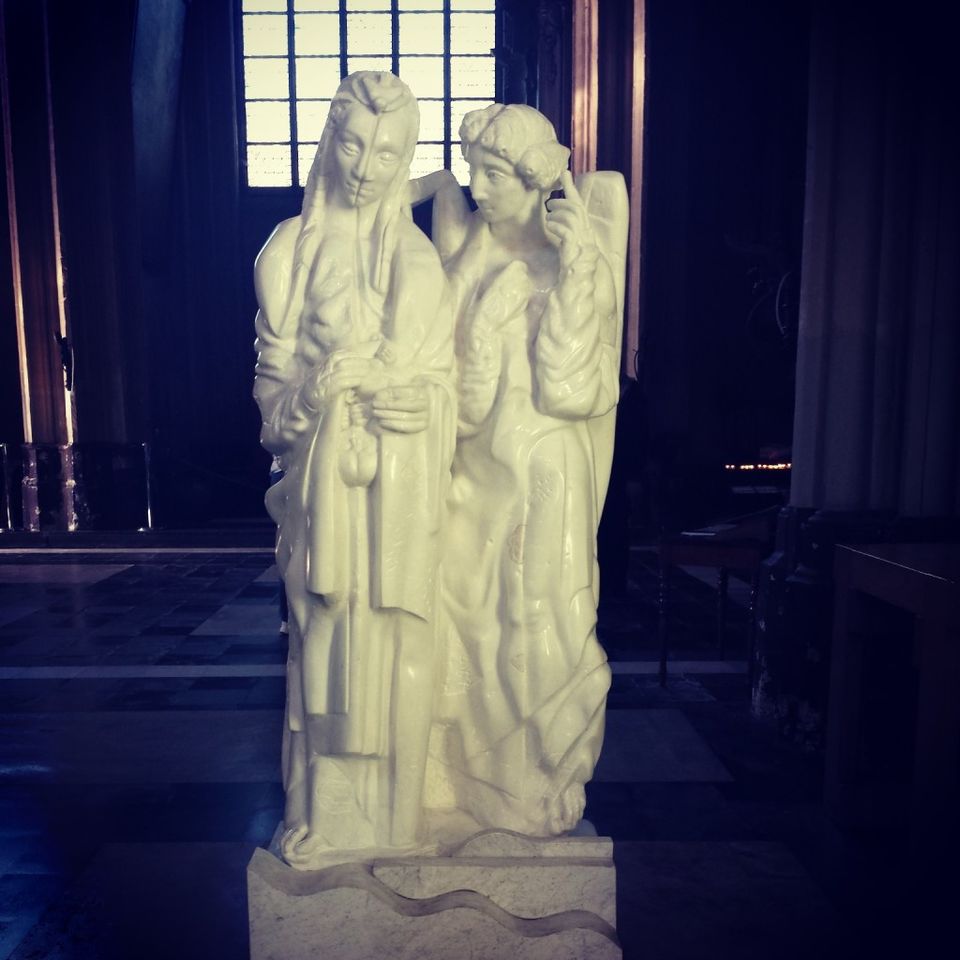 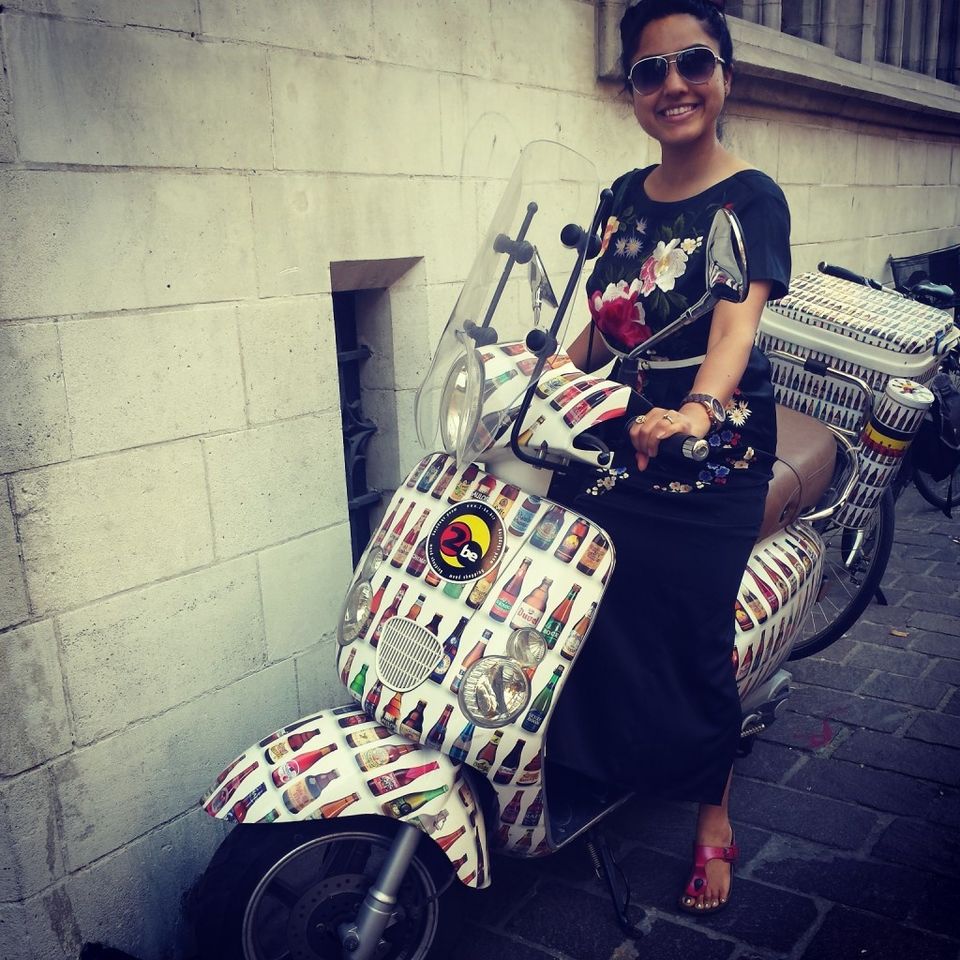 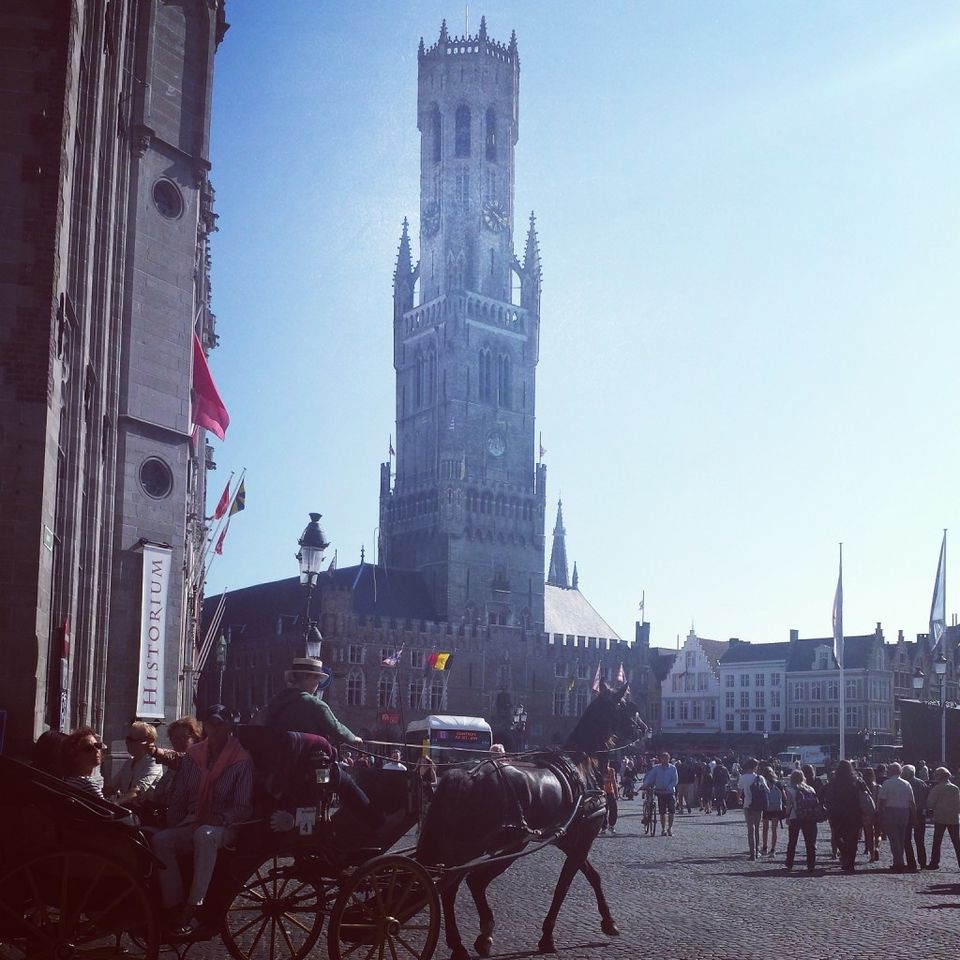 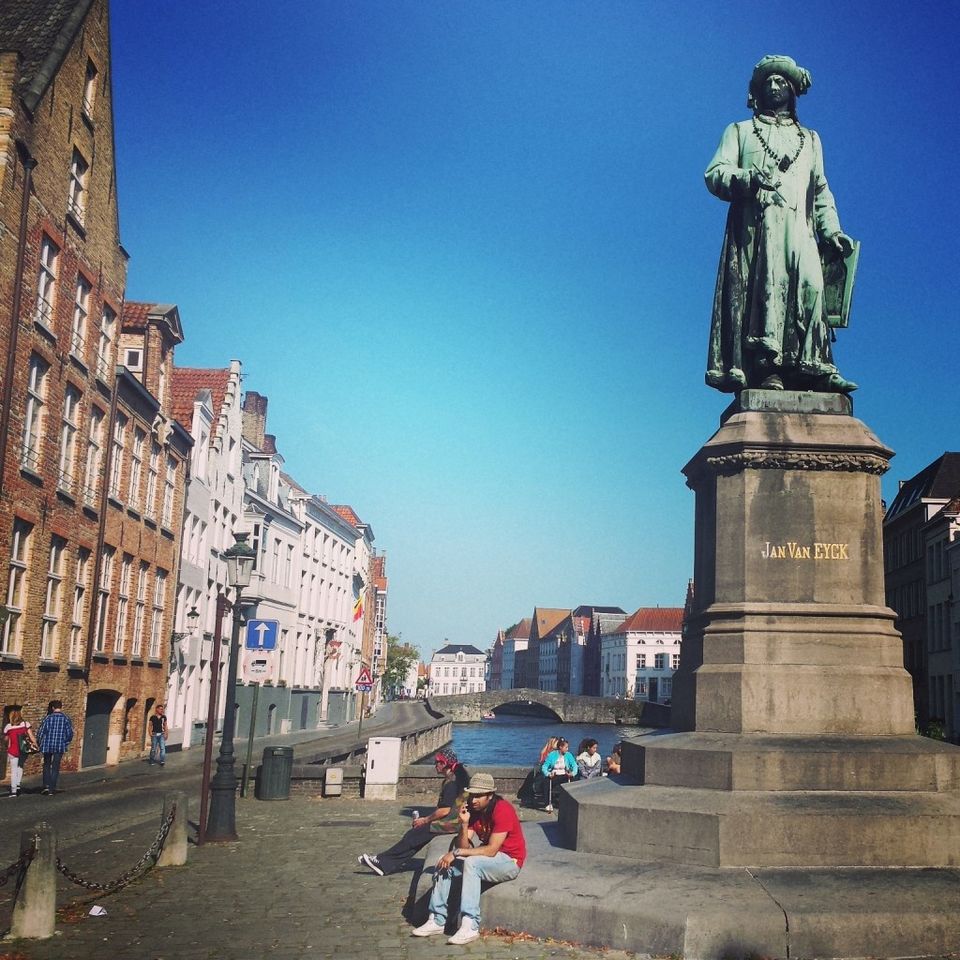 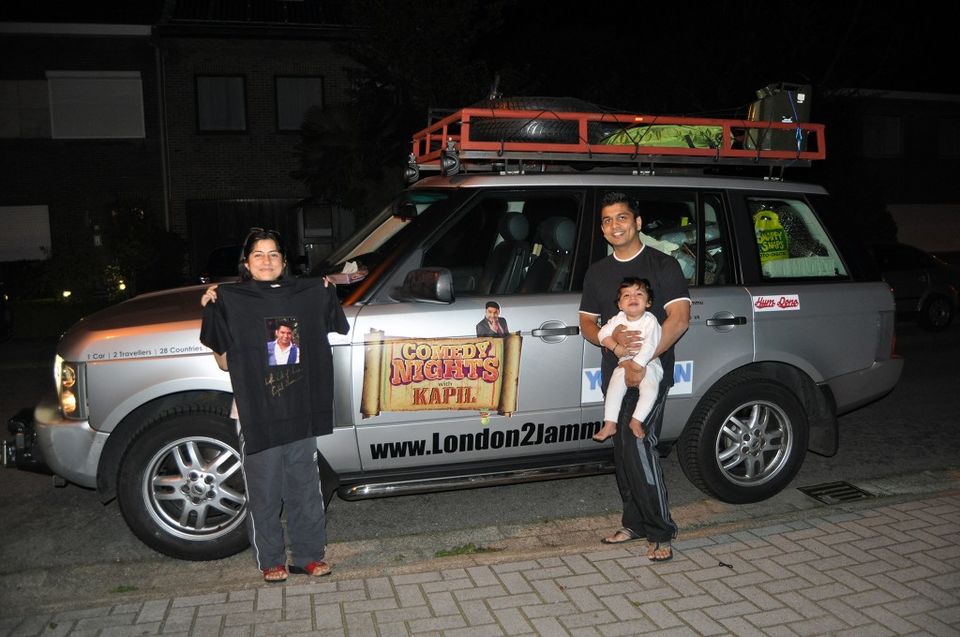